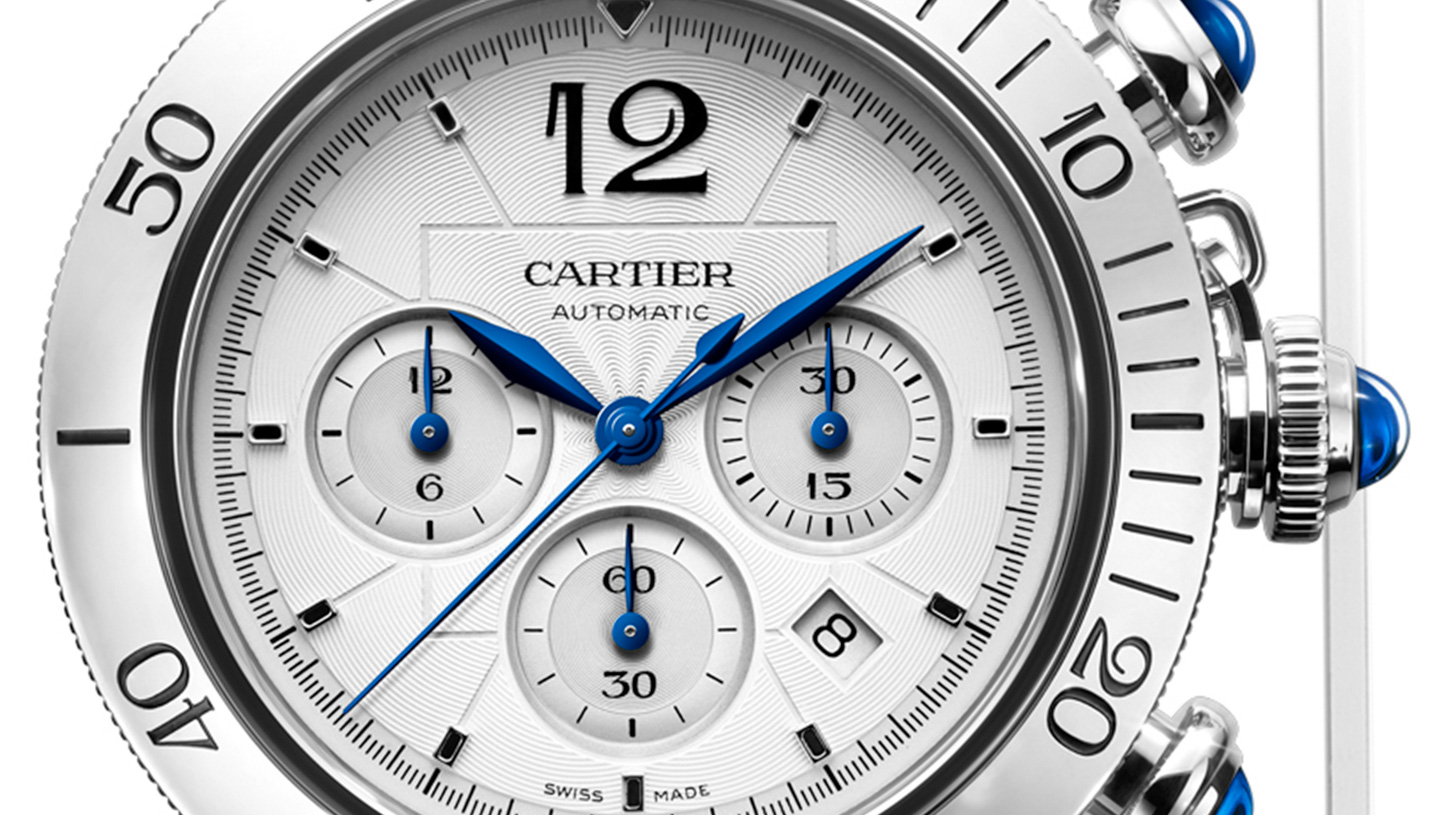 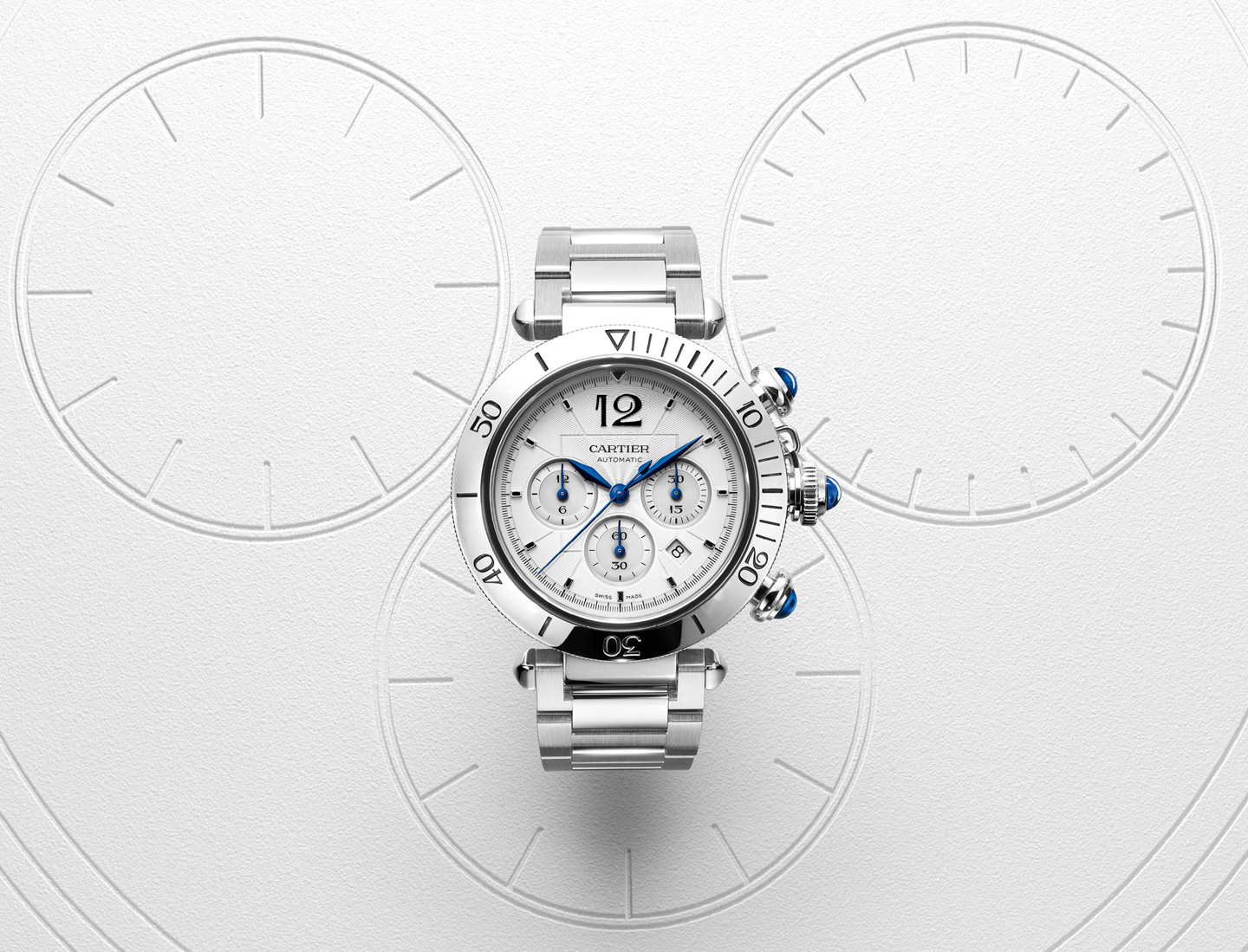 For Watches & Wonders 2021, Cartier introduces a new chronograph version to the recently revived Pasha family (aBlogtoWatch hands-on with the new three-hand Cartier Pasha here). What’s new is very much new again across the luxury watch world, as collectors continue to see favorites from the last few decades (or years) come back with facelifts and more modern features. The “Pasha de Cartier” (as it is officially called) Chronograph 41mm uses the same width case as the three-hand automatic version but is a larger-wearing watch due to the addition of the crowns and the busier dial. The chronograph is also the sportier version given that it has a uni-directional rotating diver’s style bezel.

Cartier’s larger product strategy is an interesting formula. The company discontinues models after producing them for a particular time, only to bring those models back later once people have started to miss them. Cartier also happens to be one of the few watchmakers these days that also released entirely new case shape designs, but innovation is in short supply when the economy doesn’t support that type of open-minded thinking. For this reason, the luxury watch world is releasing very similar analogs to products they have made in the past. For example, Cartier could have returned the Pasha Chronograph in a more modern form, but instead, the watch is more or less designed to look as though you could have purchased it yesterday. That’s modern luxury watch taste for you. 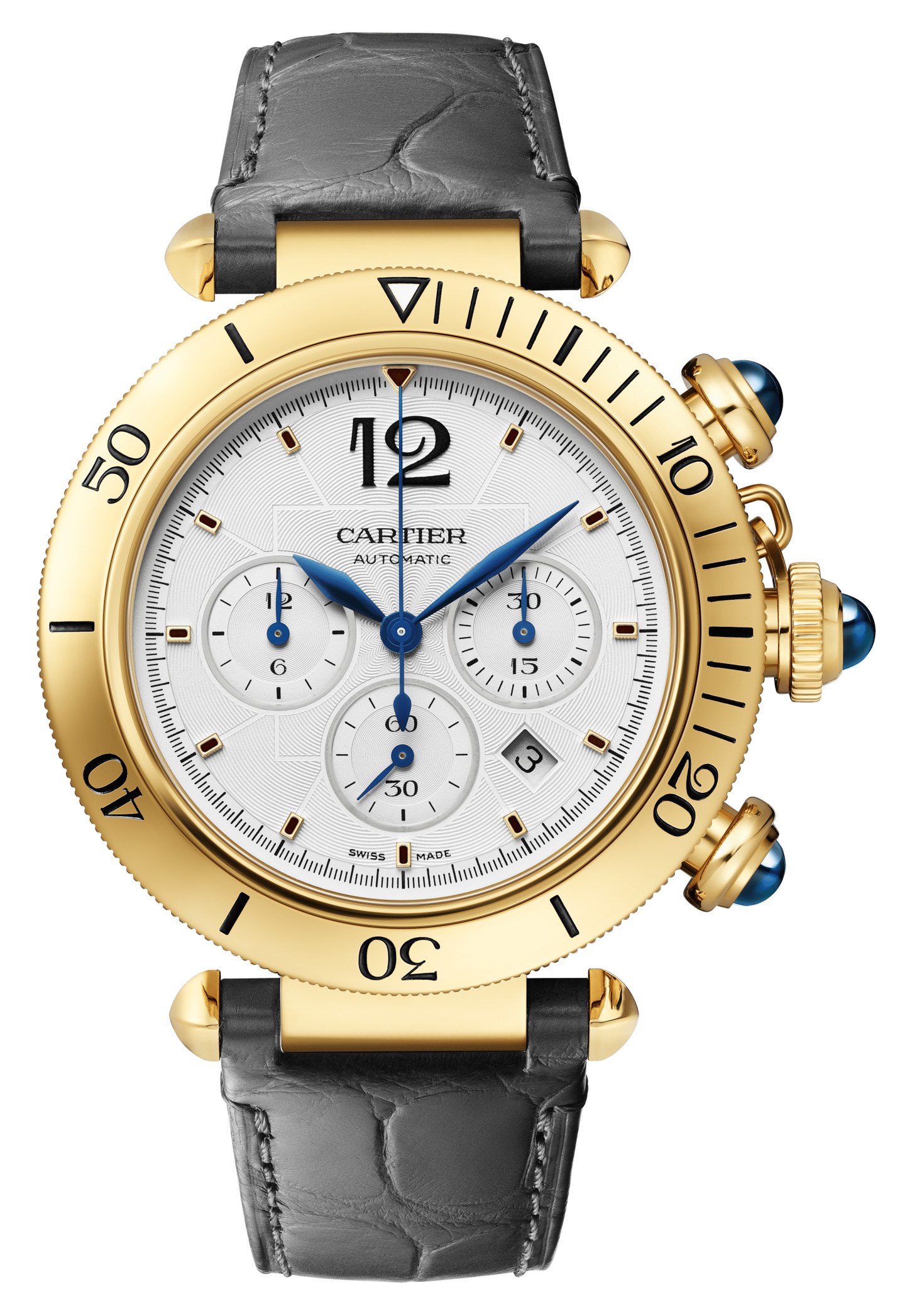 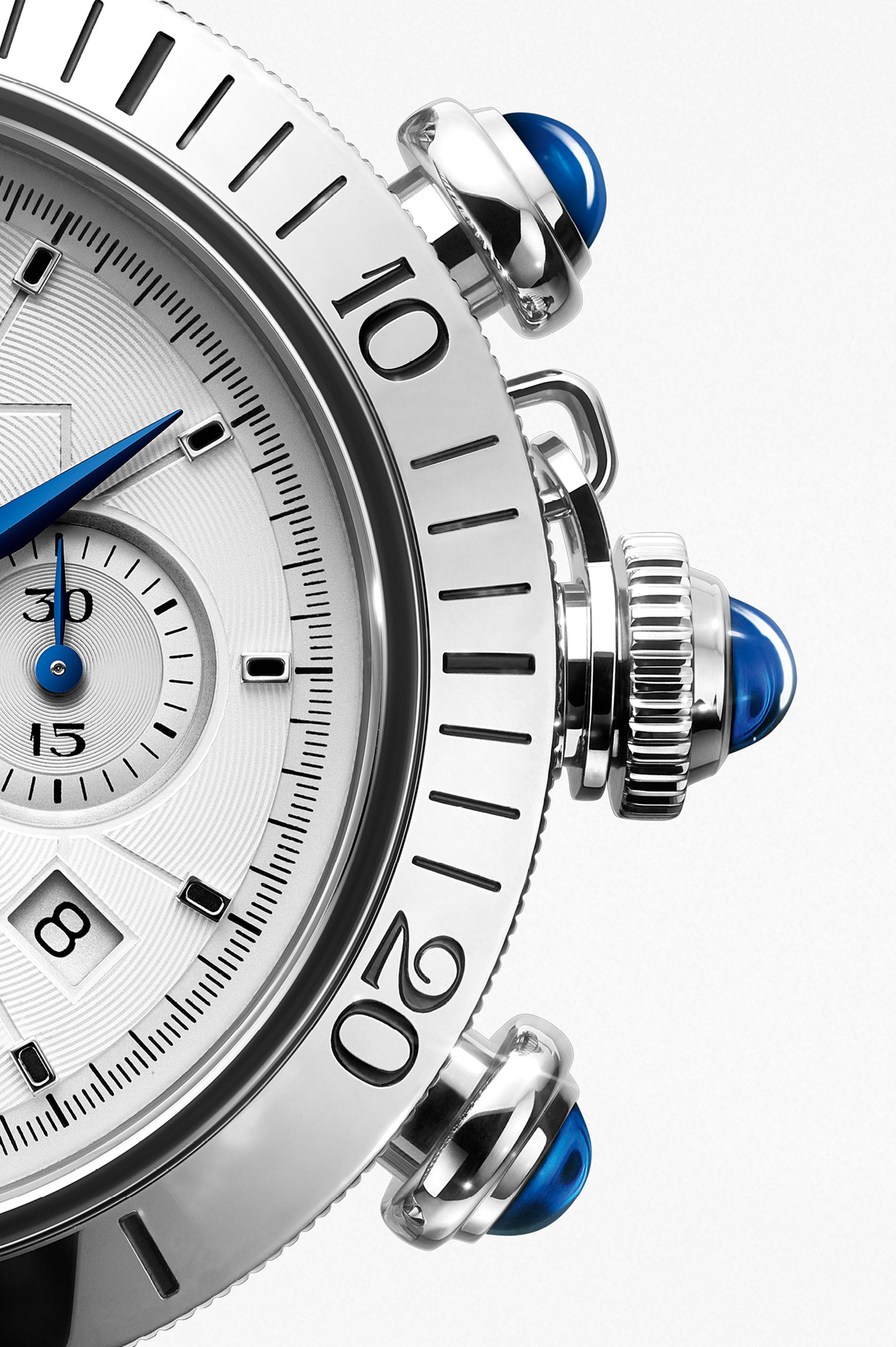 Part of the idea is to attract watch enthusiasts who missed out on the original versions of the watch. In that sense, the 2021 Cartier Pasha Chronograph isn’t a sequel as much as it is a remake. It’s the Pasha Chronograph for a new generation, without too much concern for what veteran Cartier fans might like. And there are actually a lot of long-time Cartier men’s watch fans, given how nicely the Paris-based company does men’s watches when compared to its women’s watches or elaborate jewelry collections.

The Pasha is a marine-themed watch, combining an old boating spirit with a diver’s watch and a sense of gentleman class. The distinctive screw-down crown protection cap is inspired by vintage systems designed to keep watches out of a watch case. Screw-down crowns themselves make this type of technology obsolete. From a design perspective, the visual interest of the crown cap along with its connection point to the case made for an interesting personality and is a major reason why the Pasha line has enduring popularity for Cartier. 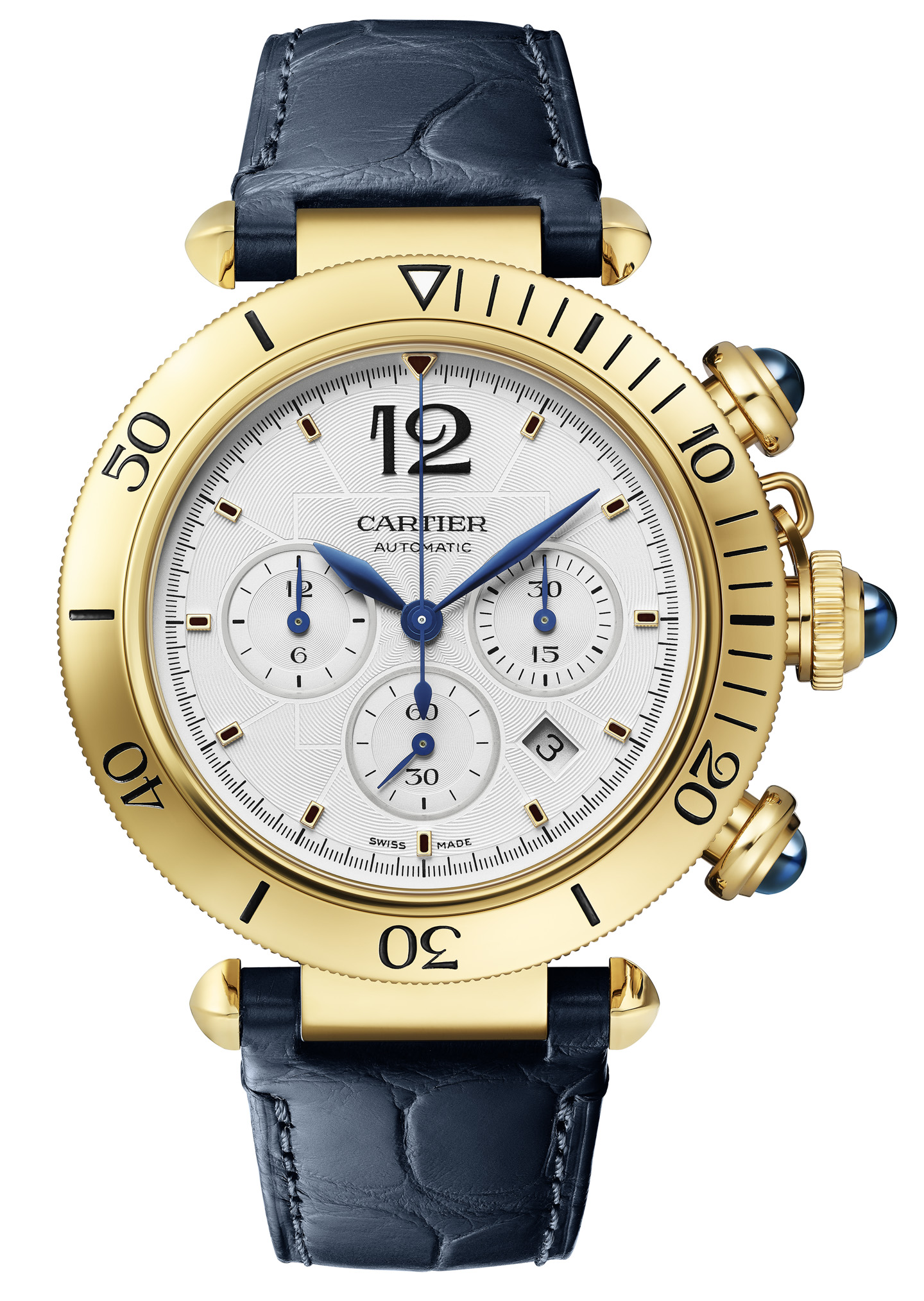 Inside the Cartier Pasha Chronograph is Cartier’s own Swiss Made automatic movement known as the caliber 1904-CH. MC This is the standard Manufacture Cartier caliber 1904 automatic watch with a 12-hour chronograph module over the base 4Hz, two-day power reserve movement. The chronograph layout on the dial is much more “classic” on this new Pasha Cartier than the previous version that probably hasn’t been on the market for 15-20 years. That older version has elliptical-shaped chronograph subdials, whereas the 2021 Cartier Pasha Chronograph is more traditional (conservative) in how it implements the chronograph with slightly recessed round subdials. The hour markers are petite but applied and legible, while the signature-style Pasha hands are in blue-toned steel. 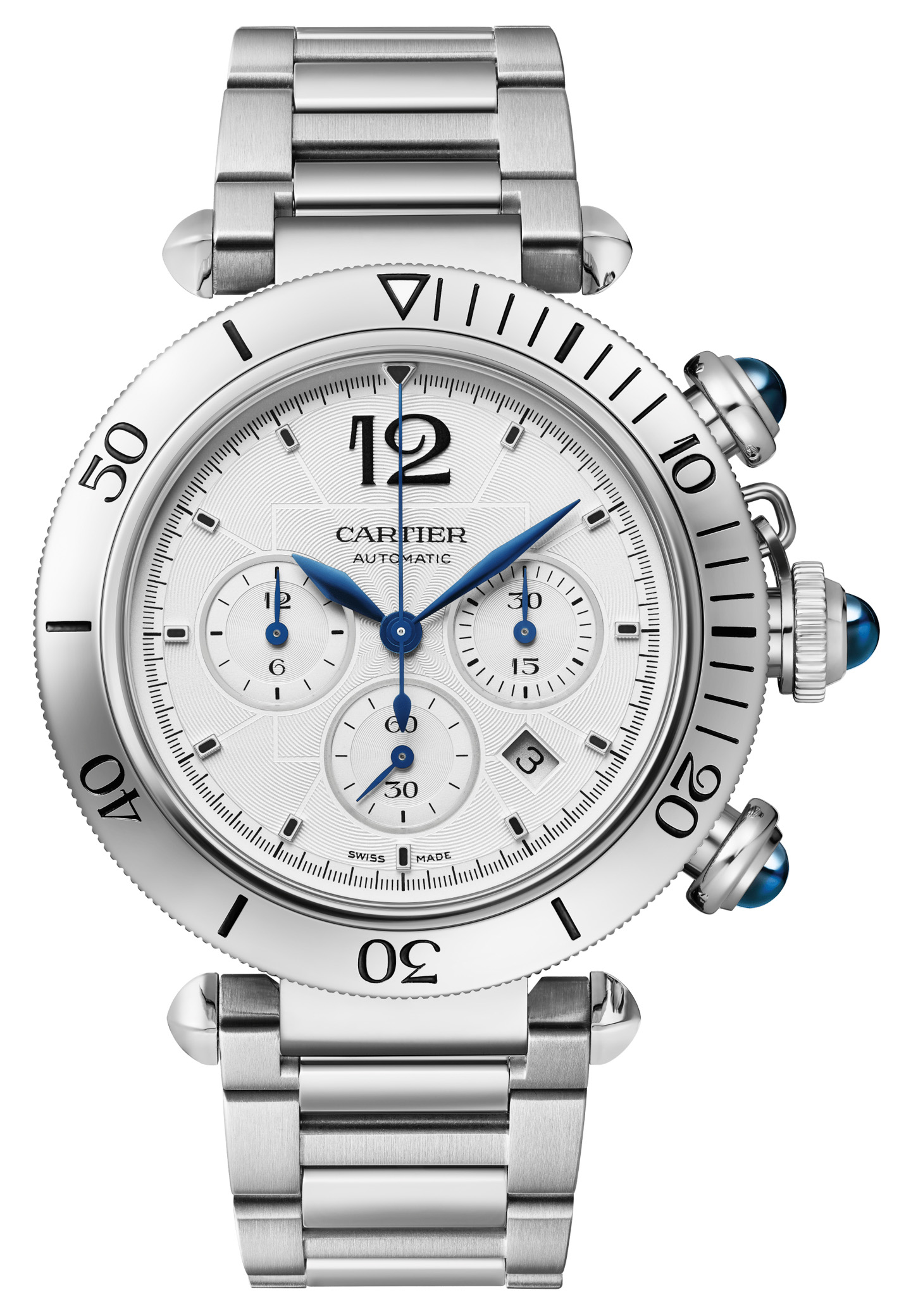 Matching the blue of the dial’s hands is the spinel (in the steel models, sapphire crystal cabochons in the gold versions) used for the blue-stone cabochons on the crown and the two chronograph pushers. The Pasha Chronograph case is 41mm-wide and 12mm-thick with lugs that feature a Cartier-unique quick release strap system. The quick-release (known as QuickSwitch) can be used for either the bracelet or the strap option – and like other modern Cartier watches, the Pasha bracelet links can be sized without a tool thanks to Cartier’s SmartLink system. All of it works very well, but beyond the first time wearing the watch, I’m not sure who needs a tool-less way to adjust the size of these bracelets, given that once people initially size them for their wrist, there isn’t a good chance they will decide to switch them again.

At debut, Cartier is only releasing two versions of the Pasha Chronogrpah 41, including a steel version and 18k yellow-gold version. Both of the watches come with at least two straps – allowing users to experience the ease of changing their straps for additional fashion versatility. I’m certainly looking forward to checking these out on my wrist. Price for the 2021 Cartier Pasha Chronograph 41mm watches is $9,450 in steel and $23,100 in yellow gold. Learn more at the Cartier watches website here.