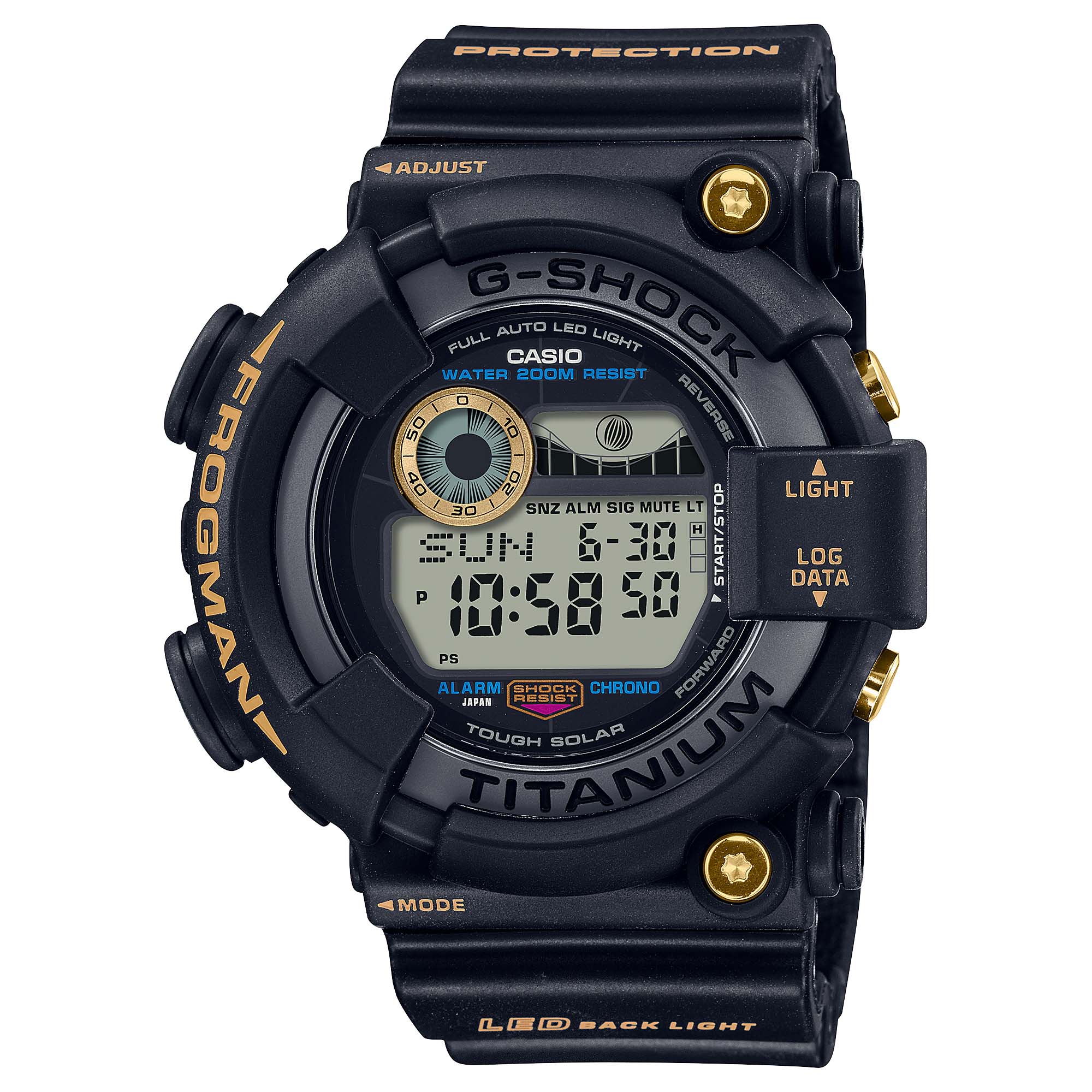 When it comes to virtually indestructible sports watches, the Casio G-Shock lineup is usually the end-all answer for the absolute most practical option. Shock resistant and packed with a wealth of digital features, even the most humble G-Shock models offer users a generous 200 meters of water resistance. With such a significant depth rating standard across the collection, it can sometimes be easy to forget that Casio actually makes a version of the G-Shock that is purpose-built for scuba diving in the form of the Frogman series, and 2023 marks the 30th anniversary of the brand’s lineup of feature-packed aquatic watches. As part of the ongoing celebration of the 40th anniversary of the G-Shock and in recognition of the 30th anniversary of the Frogman collection, Casio has unveiled the G-Shock Frogman GW8230B (officially the GW8230B-9A), which takes the core design of the ultra-popular second generation model from the mid-1990s and brings it right into the modern era with a number of updates to both its materials and functionality. 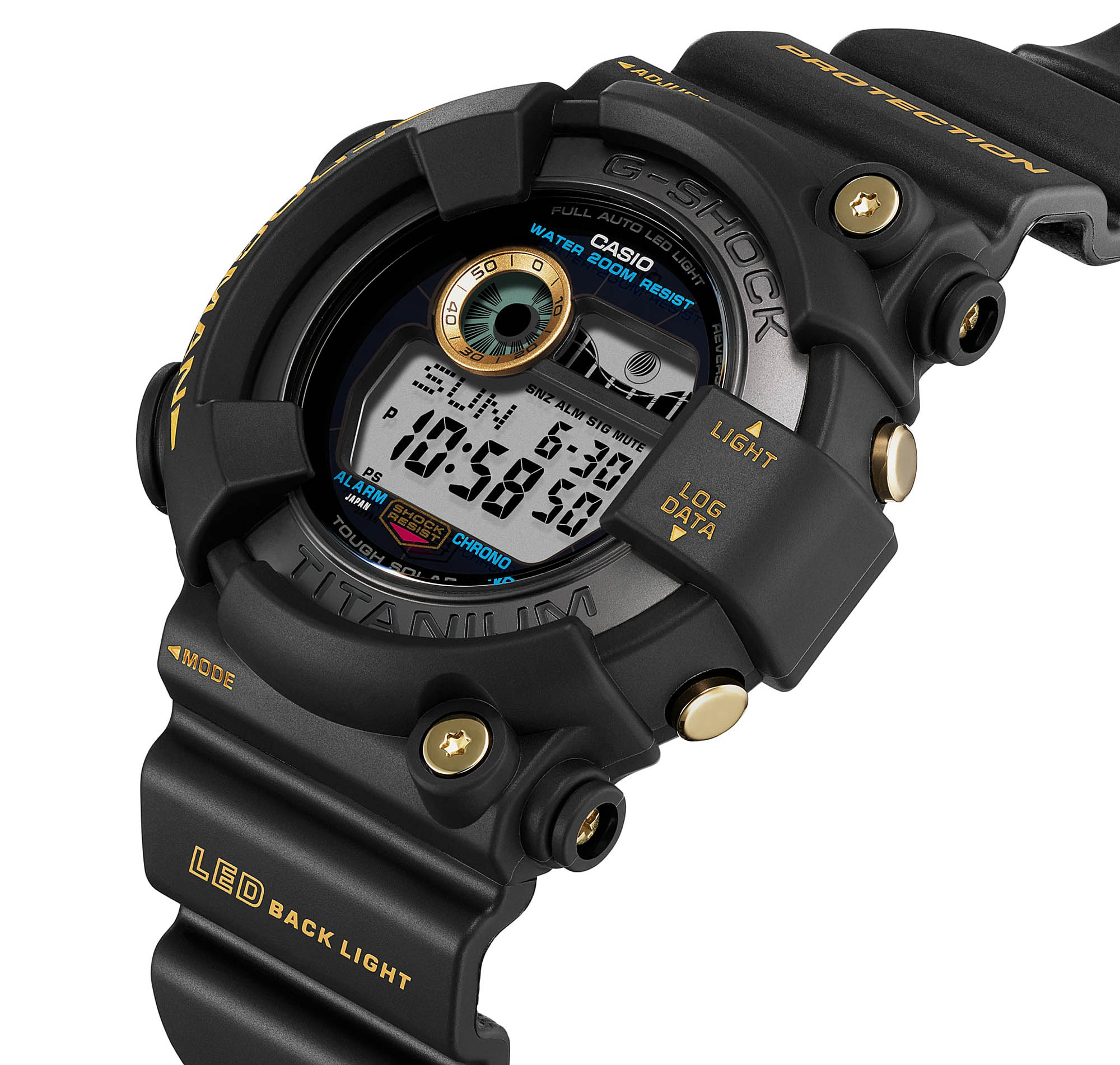 Just like the original Frogman models, the case of the new 30th Anniversary G-Shock Frogman GW8230B offers the same asymmetric profile with an inverted D-shape that helps prevent it from hindering the motion of the wearer’s wrist. The overall case profile measures 50.3mm in diameter by 52mm lug-to-lug with an overall thickness of 18mm, and this makes the watch significantly more compact than many of the other purpose-built models in G-Shock’s catalog. The inner case of the 30th Anniversary Frogman is crafted from titanium, and it features a mineral glass crystal protecting its display, along with a solid screw-down caseback and specialized buttons with a gold PVD finish that are entirely safe to operate underwater. G-Shock watches are designed for durability, so while all models from the series offer the same 200-meter depth rating, the Frogman GW8230B satisfies ISO standards for water resistance and everything about it from the materials used in its construction to the design of its case components has been specifically designed for prolonged use underwater. 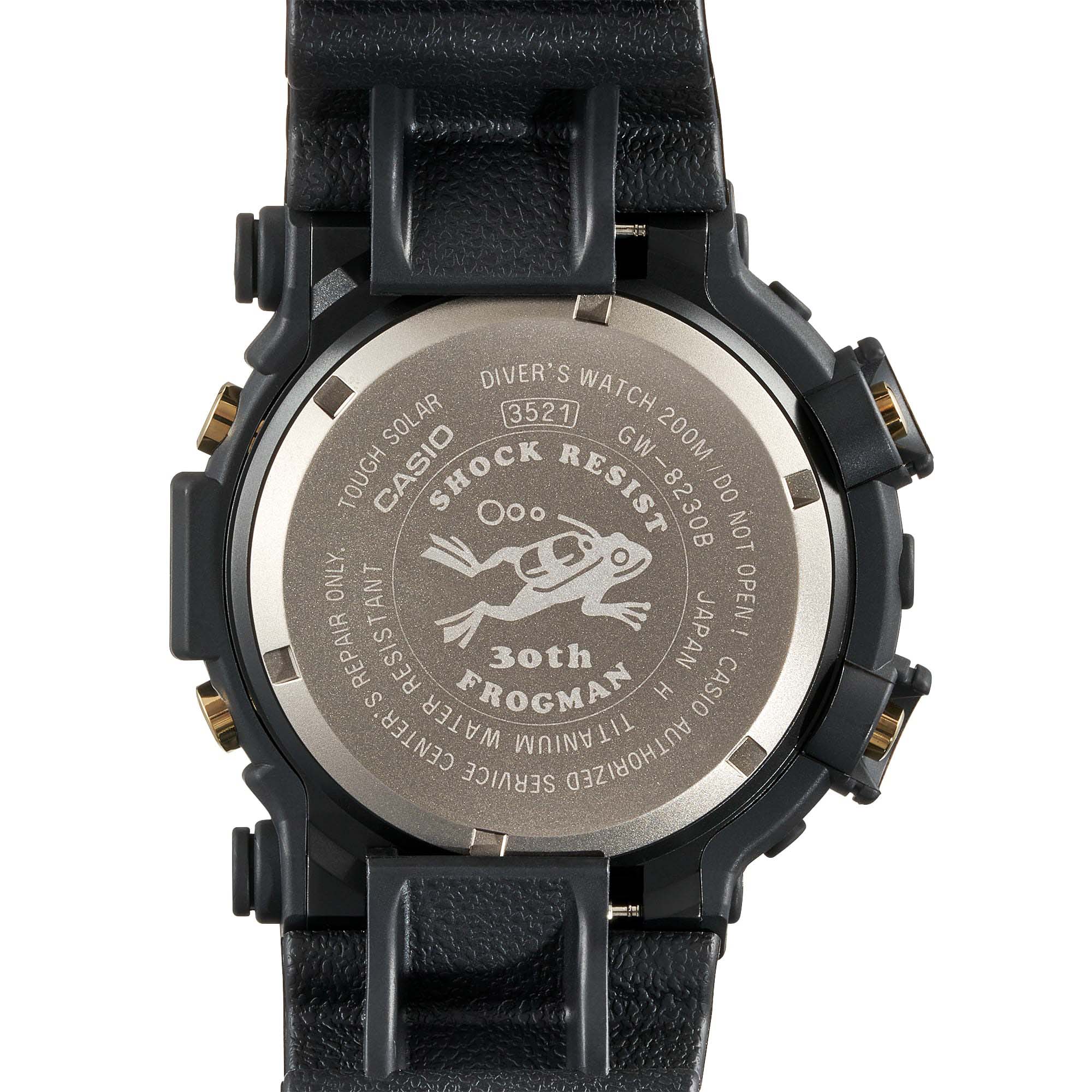 While the inner case is made from titanium, the external bezel of the G-Shock Frogman GW8230B-9A is made from black resin to offer added impact resistance. Additionally, rather than being made from the same type of resin material that can be found throughout most G-Shock watches, the 30th Anniversary Frogman has both its bezel and strap crafted from an eco-friendly biomass plastic that is created using renewable organic resources such as castor oil plants and corn to help minimize the ecological footprint of its production. Both the bezel and strap feature golden yellow-colored text that further plays into the watch’s black and gold color profile, while the strap is fitted with a gold double tang buckle to offer added security during active use. Casio first debuted this new eco-friendly resin earlier this year on a model from the Protrek collection, but the new Frogman GW8230B represents the very first time that it has appeared within the G-Shock lineup, and it seems highly likely that we will continue to see more of this Earth-friendly resin material make its way throughout the rest of Casio’s collection in the future. 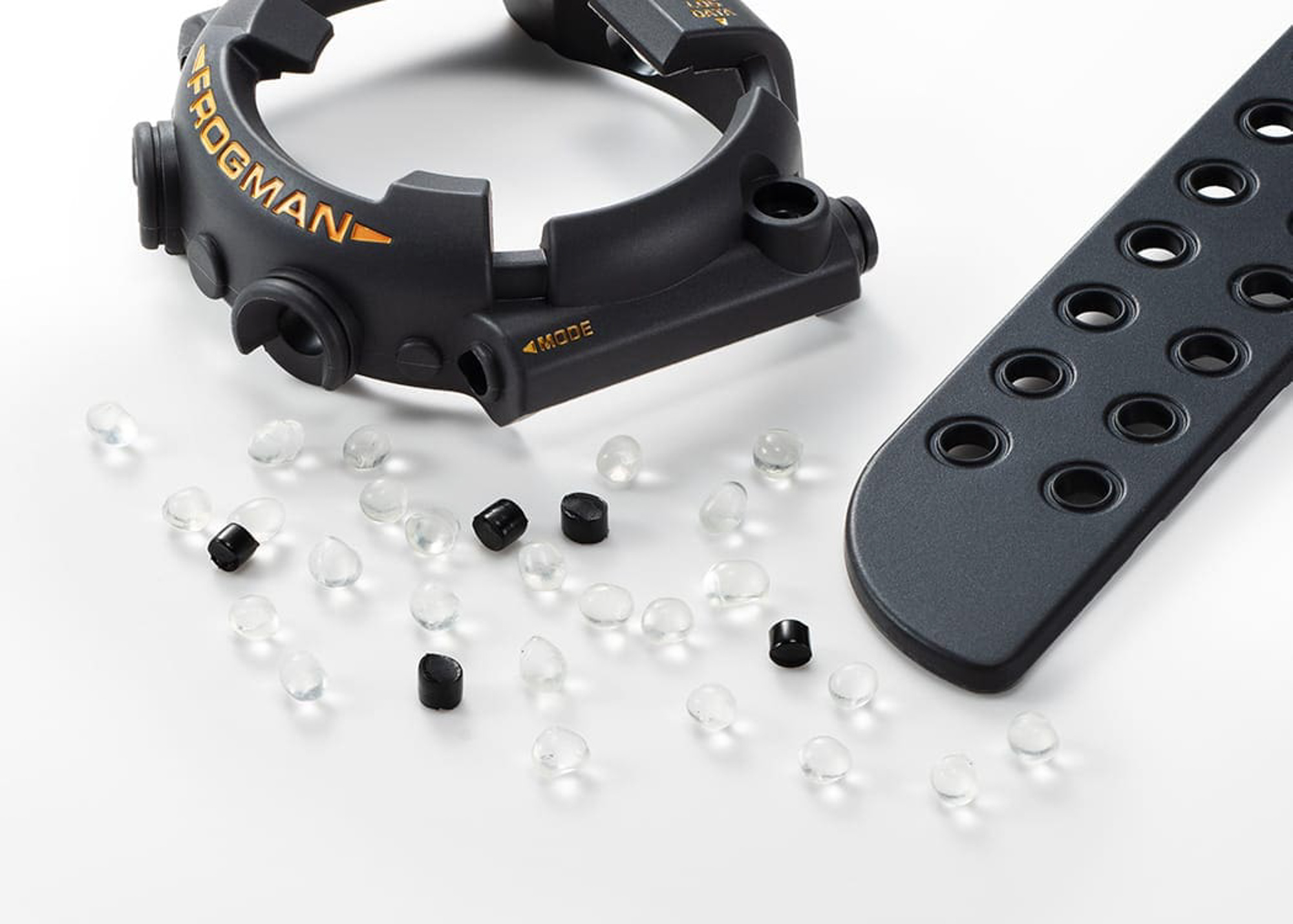 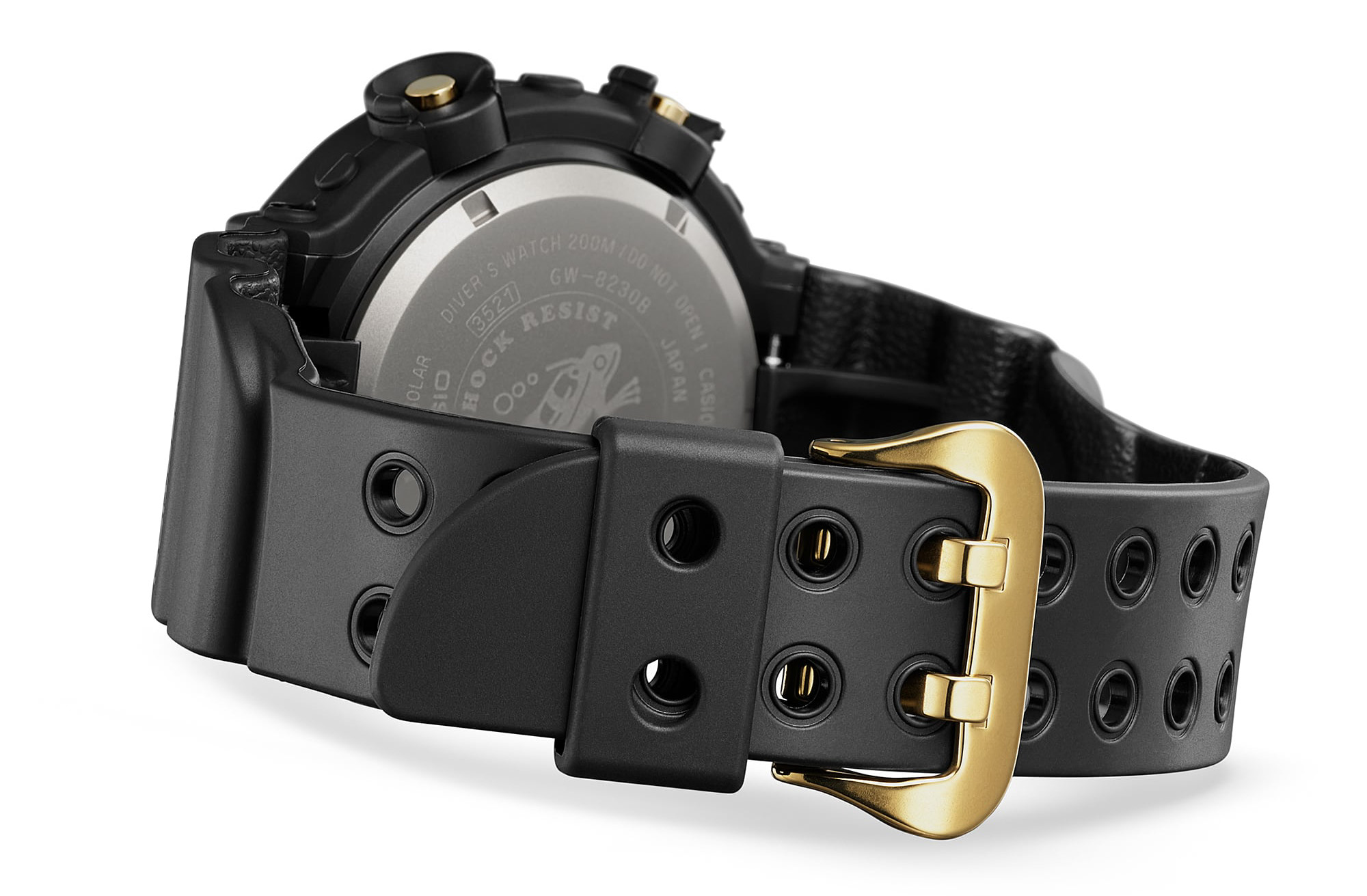 Although Casio has produced various versions of the Frogman over the years that feature fully analog displays, the 30th Anniversary G-Shock Frogman GW8230B marks a return to the completely digital layout of the original. The lower half of the screen is occupied by a traditional LCD display, while above it resides a smaller screen that is used for displaying tide graphs and moon data. Additionally, as the new Frogman GW8230B features a solar-powered internal module, Casio has created a specially designed solar panel that is shaped exactly like the display of the watch to fully take advantage of the negative space surrounding its LCD screens. Just as you would expect from a G-Shock dive watch, a high-brightness LED backlight illuminates the display, and to highlight the fact that this is a 30th-anniversary model, the screen lights up to reveal the Frogman’s diving frog character, which also appears engraved upon the watch’s solid titanium screw-down caseback. 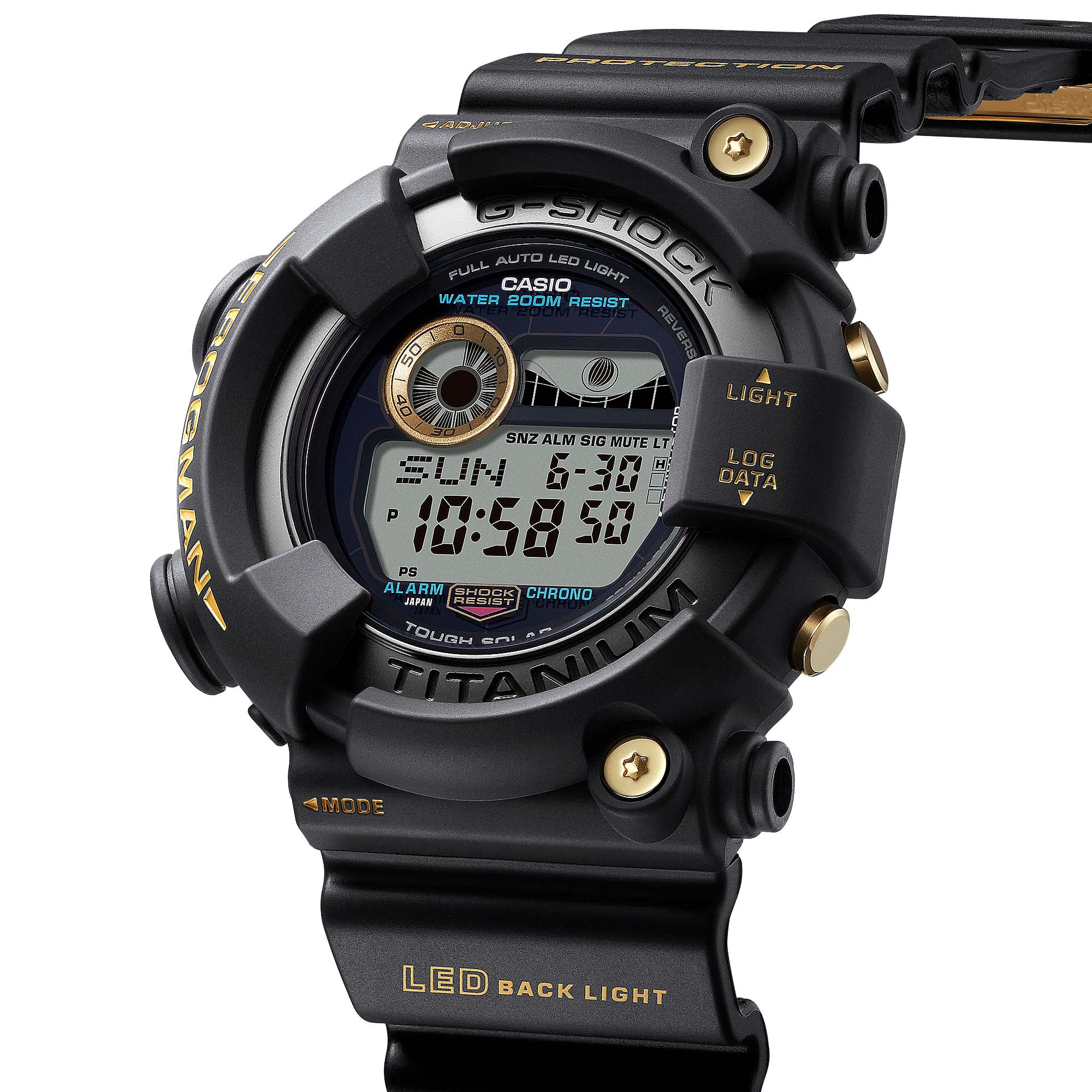 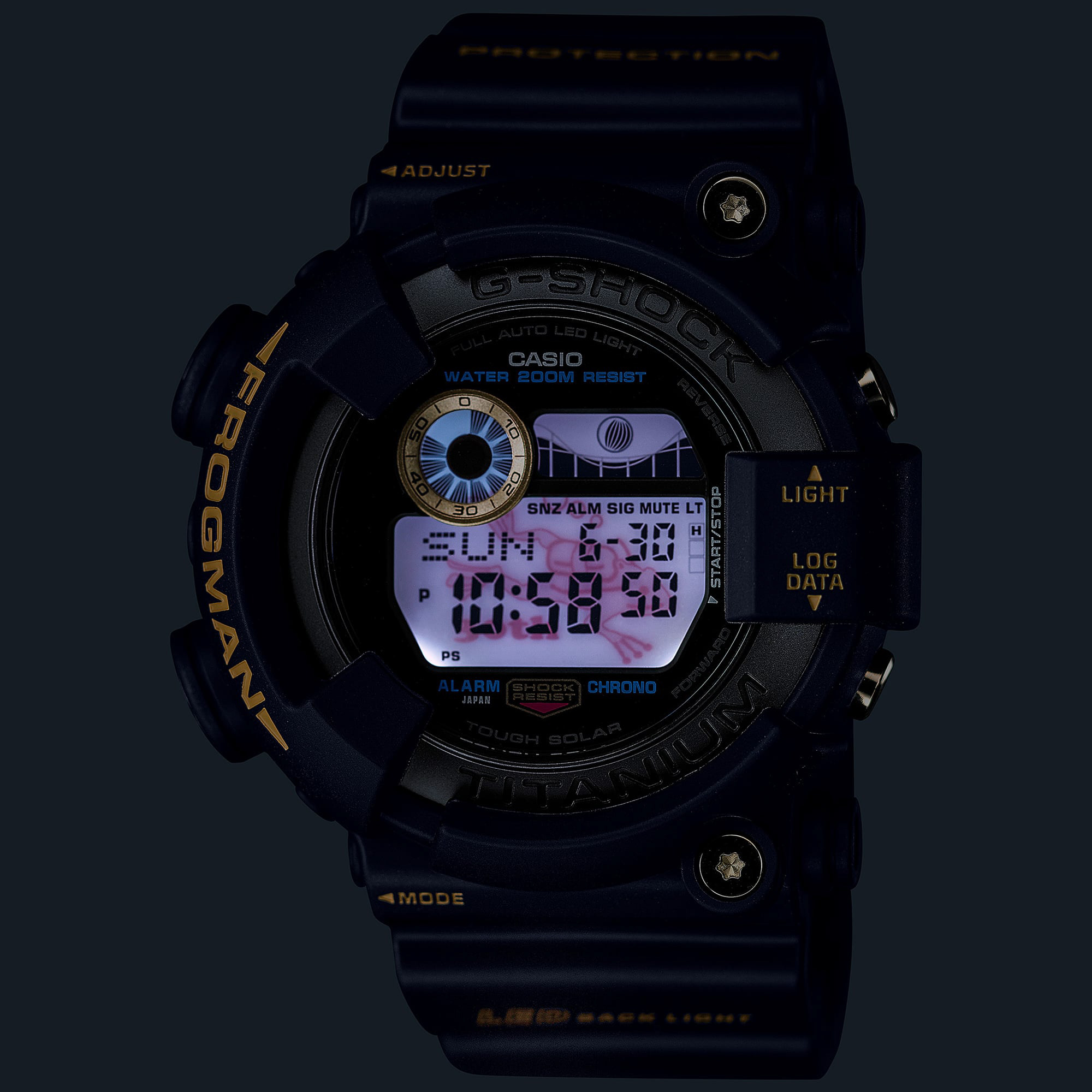 Given that the Frogman series is designed specifically for scuba diving, it includes a number of advanced features that you won’t find on normal G-Shock models such as dive time and surface interval measurement, plus the ability to store up to ten diving logs for recording data like the date/start times of dives and the total duration spent in the water. Officially known as Module No. 3521, the fully digital internals of the G-Shock Frogman GW8230B are also capable of tracking both tide and moon data, while also offering all the usual features that we have come to expect from Casio’s more advanced models, such as a stopwatch, countdown timer, alarm, world time functionality, auto-programmed calendar, and a power saving feature, plus both 12-hour and 24-hour timekeeping formats. As the module is solar-powered, opening up the case for regular battery replacements will not be required, and the watch can run for approximately 14 months in total darkness in its standard mode, or up to 36 months without any light exposure when using its power save function. 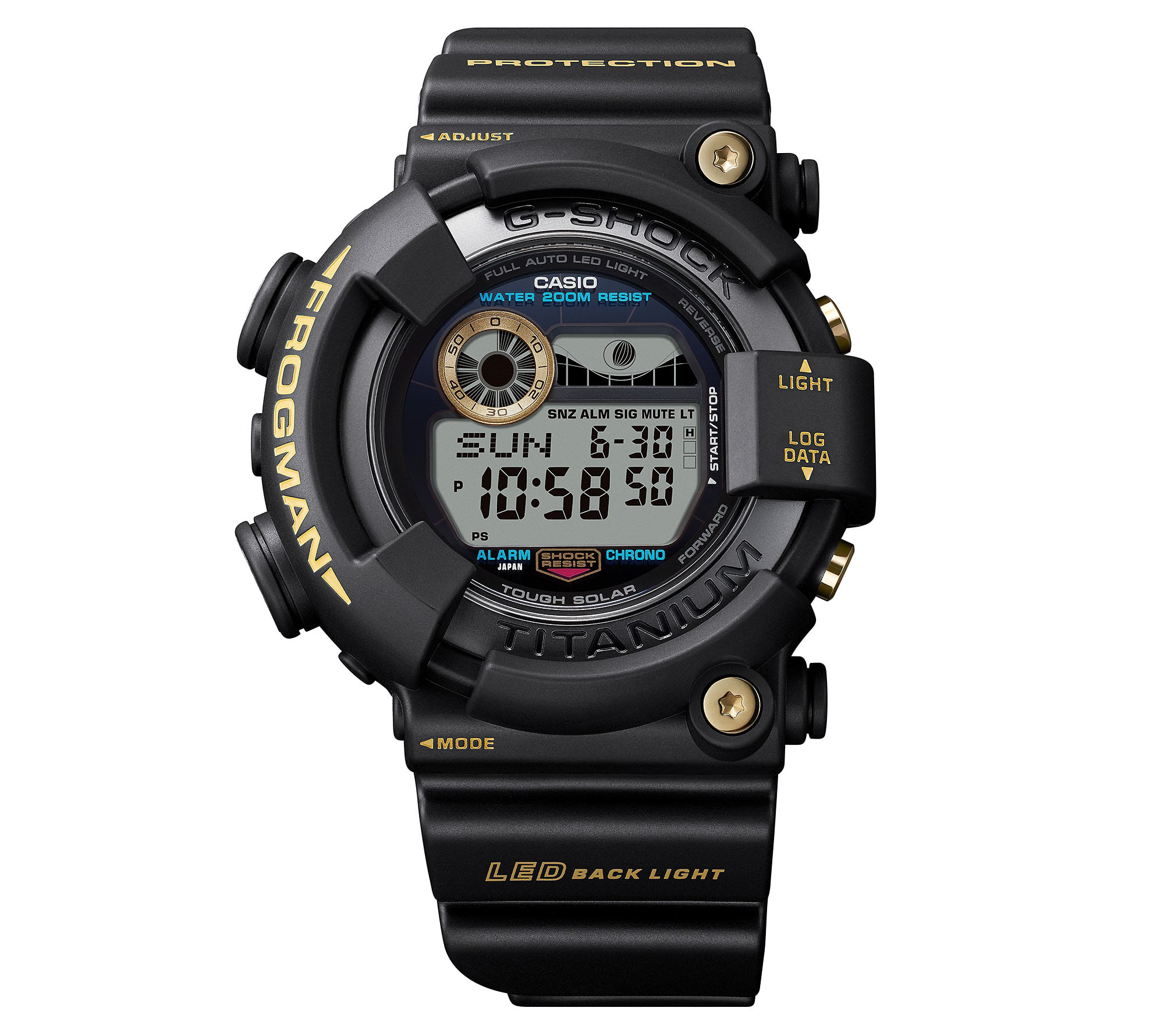 Casio produces G-Shock watches at virtually every possible price point, from entry-level models that are priced at under a hundred bucks to artfully crafted limited-edition models that can sell for thousands of dollars. Given that the Frogman is among the more advanced models that G-Shock produces, it is inherently more expensive than the brand’s standard base-level offerings, yet it is significantly more affordable than the premium MR-G models that Casio also sells. The 30th Anniversary G-Shock Frogman GW8230B-9A is accompanied by an official retail price of $620 USD, and it will be produced as a limited edition model, rather than being a core addition to the brand’s collection. Although the original Frogman model from 1993 seems like it would have been a more natural choice to revive for the 30th-anniversary model, it is actually the second generation version from 1995 with its black and gold colorway that is the all-time favorite among G-Shock collectors, which is why it was chosen as the model to serve as the inspiration for this new watch. Offering much of the same overall appearance as the fan-favorite Frogman from the 1990s, the new Casio G-Shock Frogman GW8230B-9A adds updated materials and functionality to bring one of the brand’s most celebrated designs straight into the modern era. For more information, please visit the brand’s website.