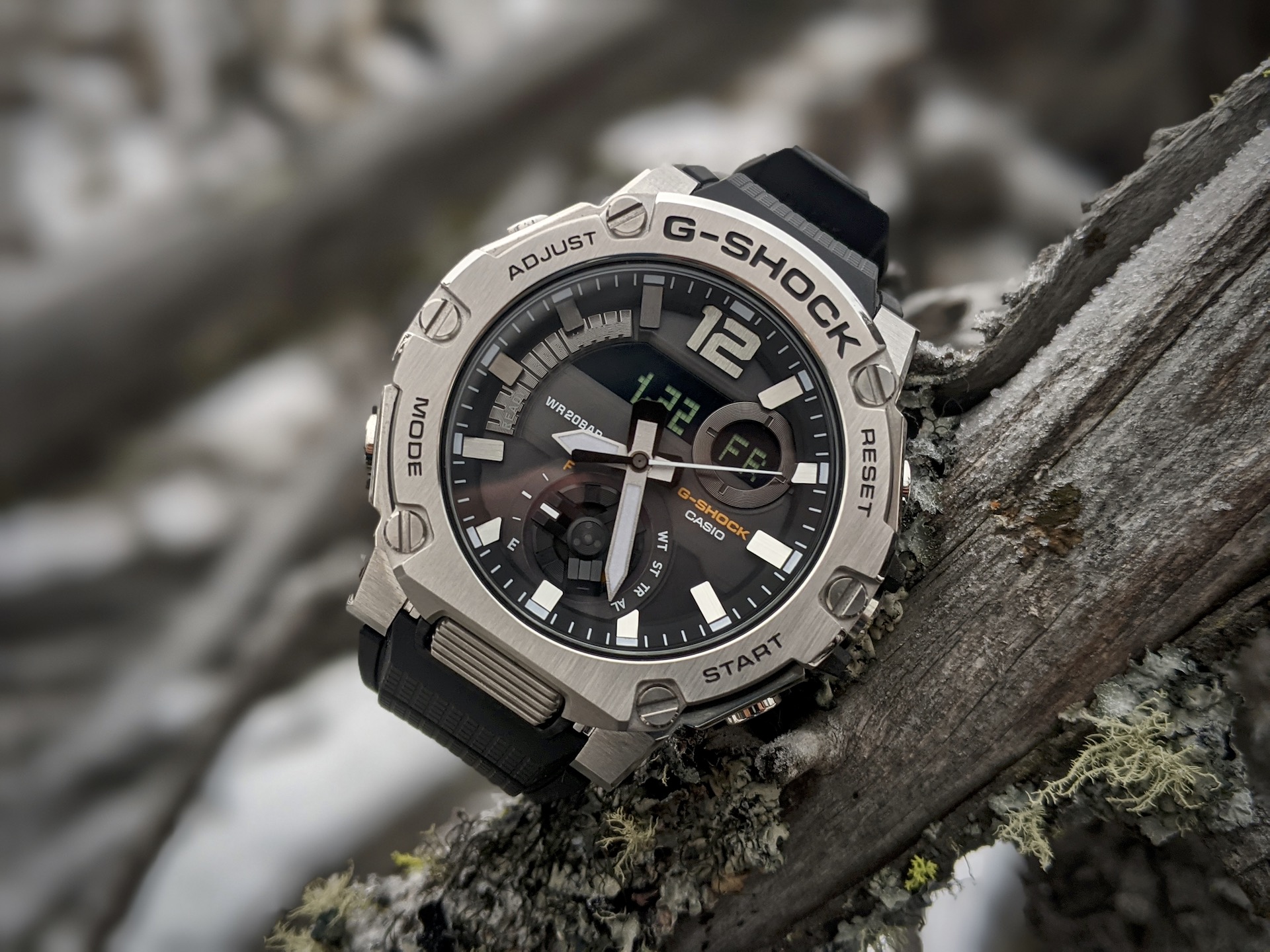 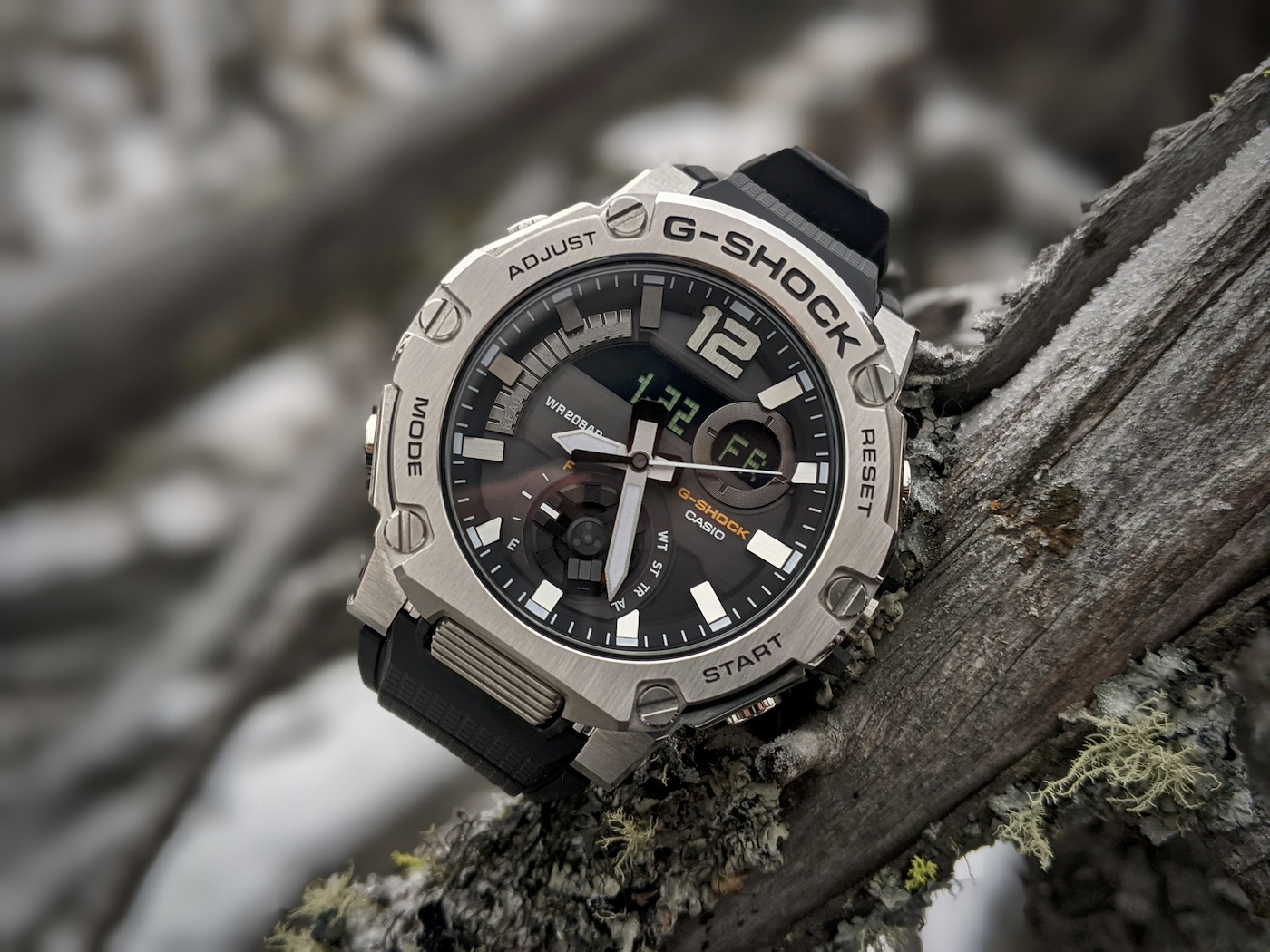 While the Casio G-SHOCK GA-2100, now better known as the CasiOak, may have garnered the lion’s share of attention for Casio’s releases over the past couple years, the Japanese purveyor of indestructible watches has quietly rolled out a number of new releases that are bound to appeal to fans of the brand. Among those releases is the Casio G-SHOCK GSTB300S-1A, a new model in Casio’s G-STEEL line, which feature — you guessed it — steel cases. 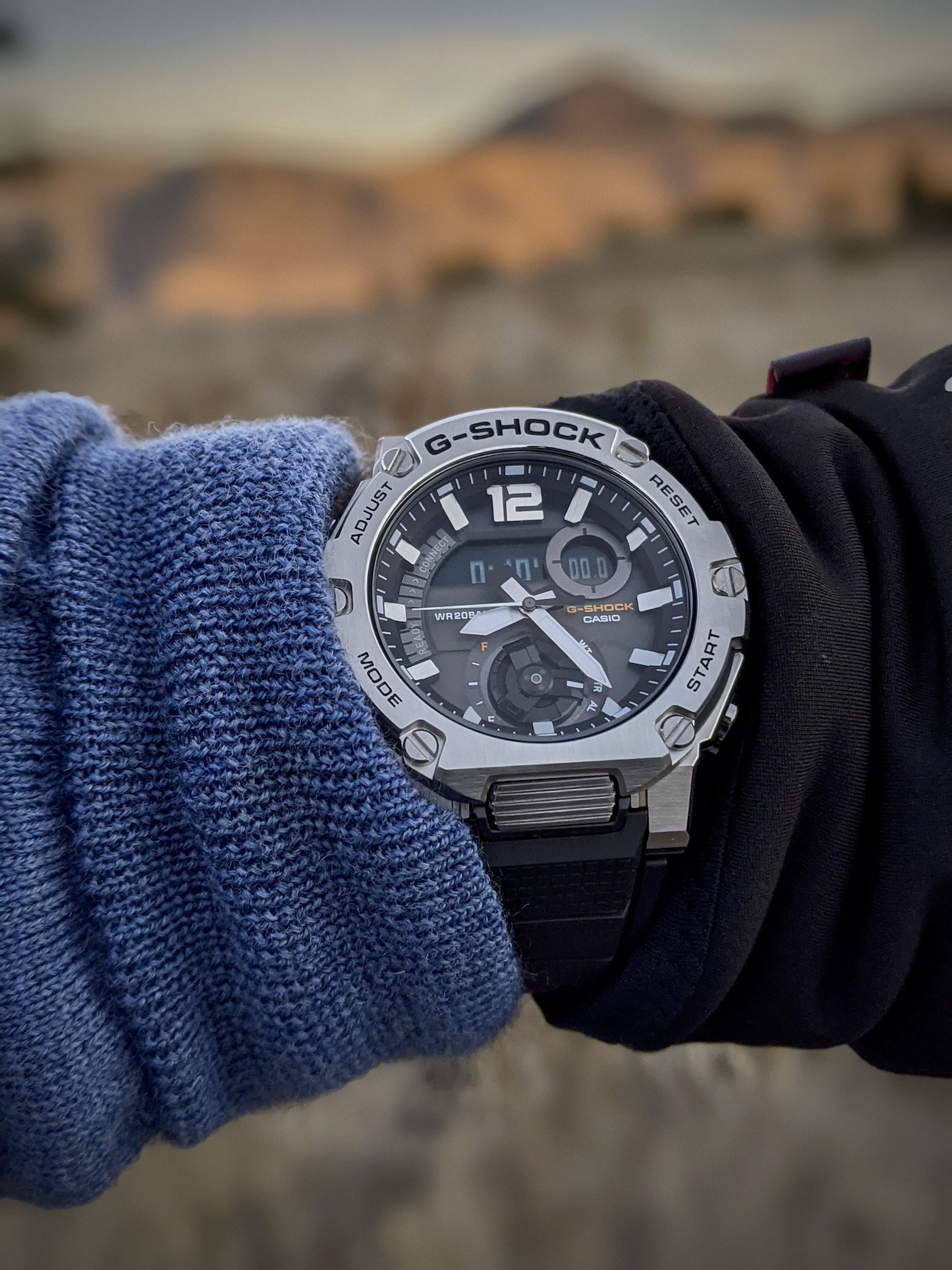 The G-STEEL line tends to fly slightly under the radar compared to some of the more popular lines in Casio’s catalog, but for those looking for a slightly more grown up analog G-SHOCK and don’t need all the features (or price tag) of the flagship MT-G or MR-G models, the G-STEEL line offers some interesting and affordable options. True, you’ll be missing the GPS and triple-sensor tech you can get in some of the pricier offerings, but if you’re looking for a robust (is that word redundant when discussing G-SHOCKs at this point?) analog G-SHOCK that dresses up – for a G-SHOCK – a bit more than other offerings in the lineup and does so at a reasonable price, the G-STEEL line is certainly worth perusing. 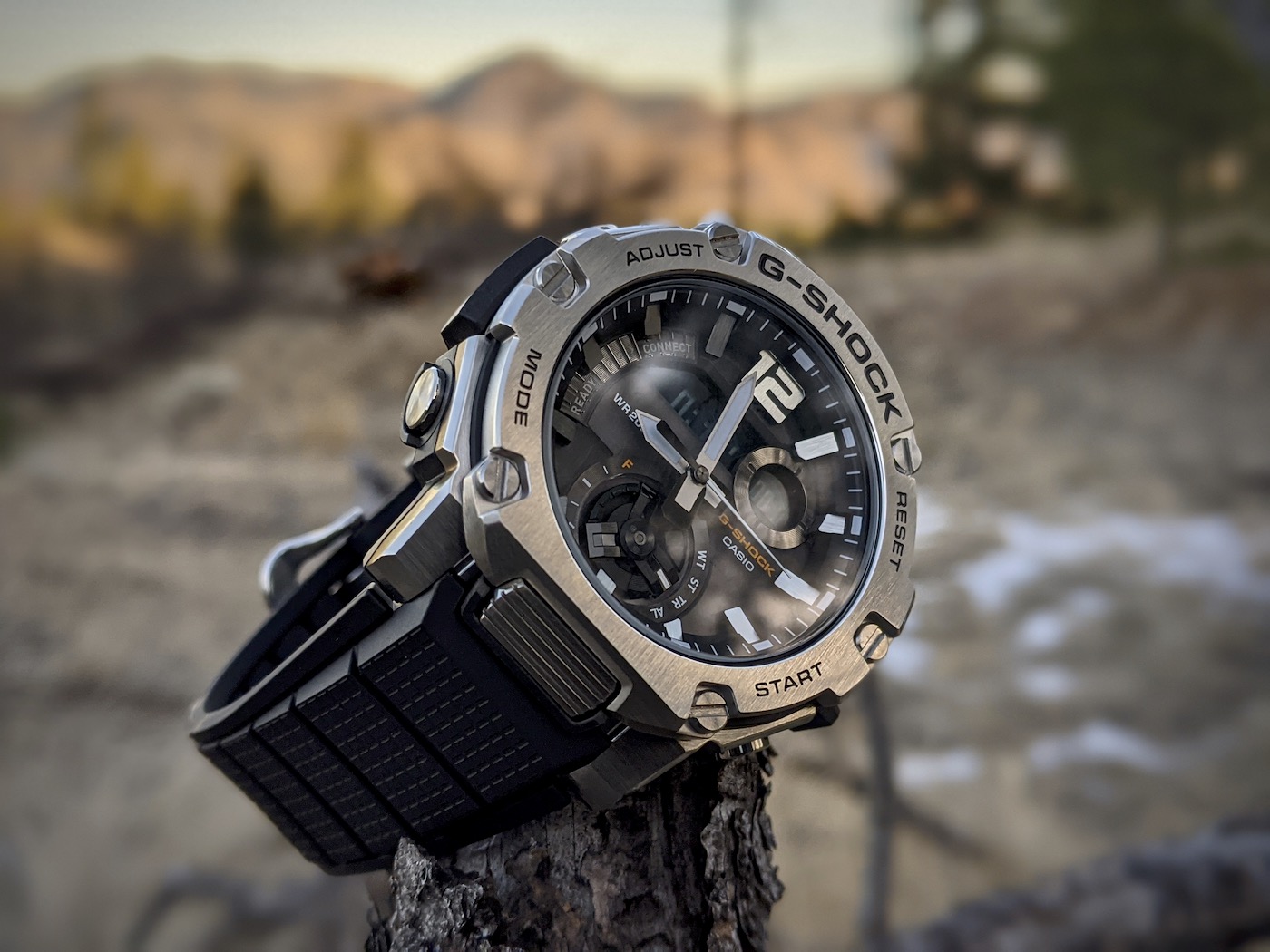 So, aside from the steel case, what does your $330 buy you when stepping into the G-STEEL lineup? First, and I’d argue most importantly, all G-STEEL models feature G-SHOCK’s Carbon Core Guard. The reason for this is simple: G-SHOCKs are meant to withstand bumps and bruises and pretty much anything short of being run over by a tank…though to be fair, a G-SHOCK DW5600E-1 survived being run over by a 24.97-ton truck, so perhaps we’re splitting hairs. The problem is that steel is a poor material choice when it comes to dissipating energy – the shock goes straight through the case into the movement. The Carbon Core Guard, a carbon fiber-reinforced resin mid-case, is an ideal solution: it’s light weight, shock resistant, rigid, and resists degradation. Top that off with a modified plate to hold the circuit board along with shock-resistant buttons and you have an extremely durable mid-case that can be paired with steel without sacrificing that trademark G-SHOCK toughness. 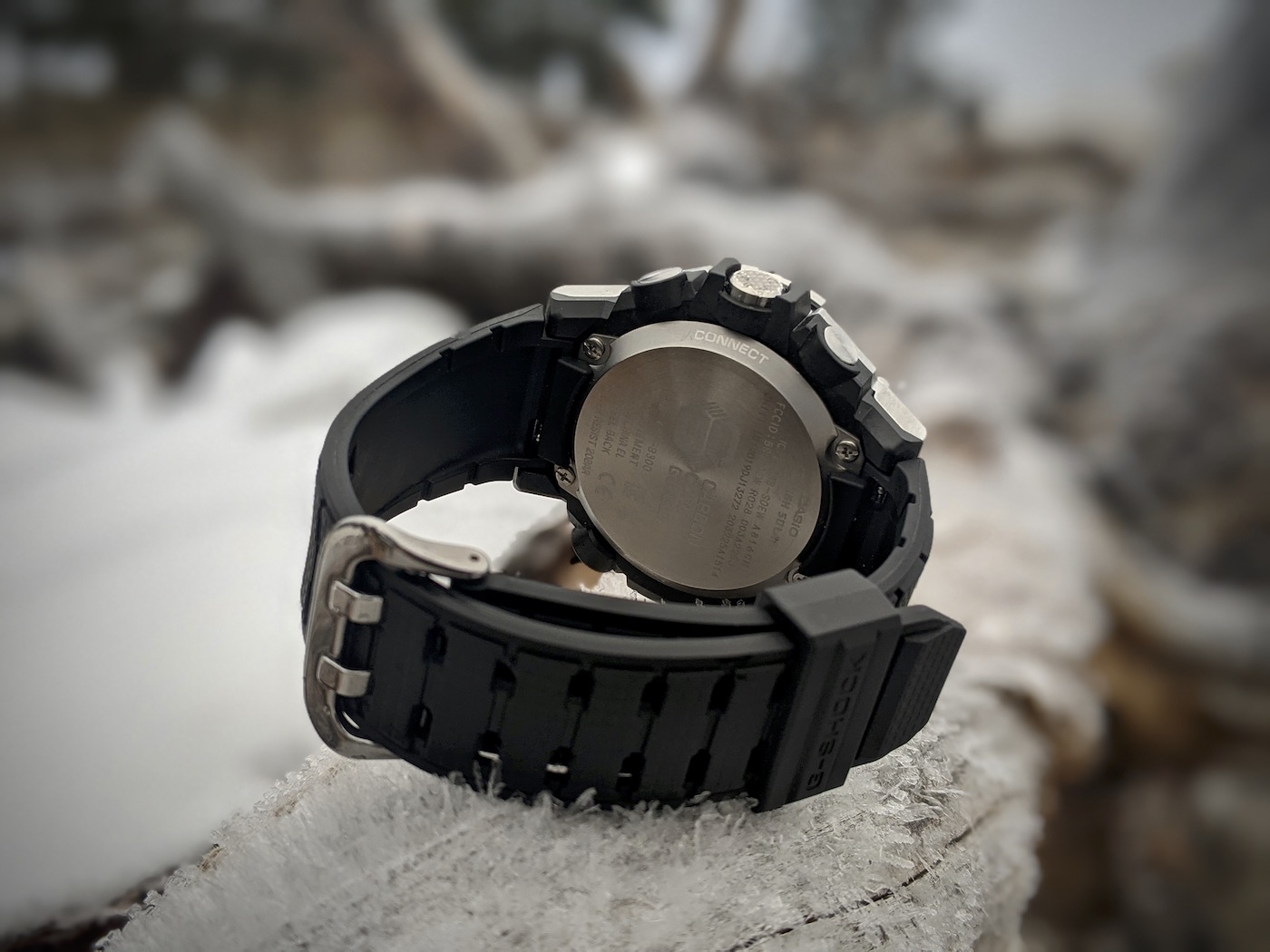 Of course, like the rest of the G-SHOCK line, the GSTB300S-1A is no one-trick pony. Sure, toughness is central to the brand’s identity, but the GSTB300S-1A houses its fair share of functionality, including Tough Solar charging, Bluetooth connectivity, Neobrite hands, a double LED light, world time, 1/1000 stopwatch, countdown timer, auto-calendar, and more. 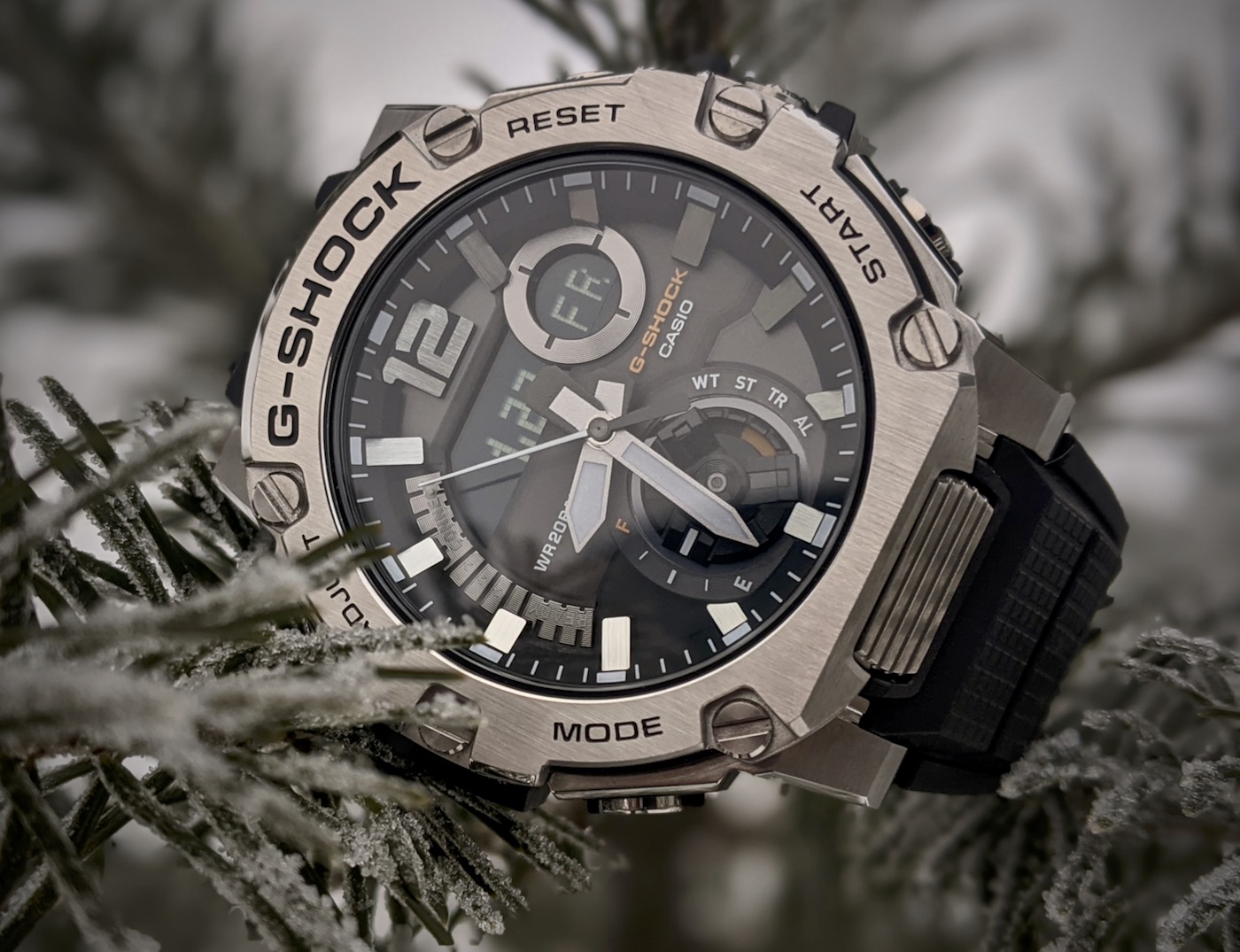 The Bluetooth connectivity is a nice touch, but luckily most users will rarely, if ever, have need of it. If you don’t want to deal with pushing buttons to access and adjust settings like timers and alarms, it’s a nice alternative, but where it really comes in handy is when setting the World Time function, as there are up to 300 cities you can choose from – a much greater selection than the major cities that come pre-loaded. You won’t find Newfoundland and Labrador, with its GMT-3:30 time zone unless you dive into the app. If you’re a stickler for timekeeping and aren’t satisfied with ± 15 seconds per month, connecting to the app will be your best bet. I found the Bluetooth connectivity option great for setting up the watch, but after that, I never found myself needing it – something I’m actually quite happy about as I already connect my GPS running watch and frankly I don’t want to deal with another connected device in my life. 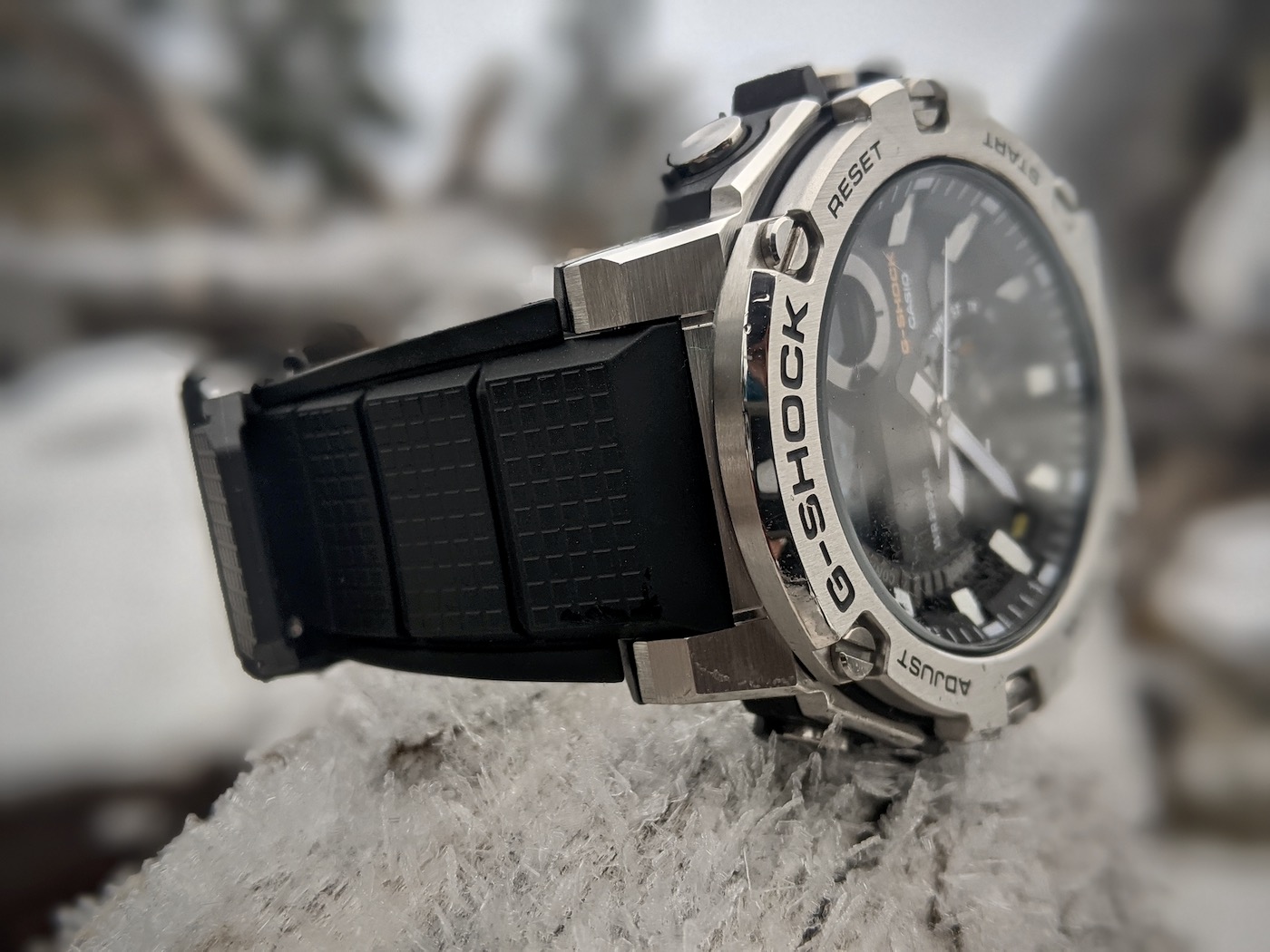 We’ve covered functionality and, like any G-SHOCK, it’s a true tool that’s eminently functional and nearly indestructible. But, then again, so is a hammer. But the beauty of G-SHOCK’s lineup is that there’s a seemingly endless number of options, depending on your taste. While the GSTB300S-1A is certainly more refined than some of the other offerings, it is still, without a doubt, a G-SHOCK and whether that works for you day-to-day or will be consigned to adventure time will ultimately come down to how comfortable you are wearing a 51mm watch that certainly doesn’t fly under the radar. Clearly the first thing that draws your eye is the steel case with prominent bezel screws – perhaps this G-STEEL should have earned the CasiOak appellation – but up next are most certainly the broad, brushed hour markers. Now, I fully recognize that we overuse the term “plays with the light” in watch reviews and I definitely never expected that term to pop into my head when reviewing a G-SHOCK, but, well, here we are. The hour markers are really the highlight of the dial for me and the sudden pops of light as you move your wrist add some unexpected elegance to this beefy tool. No, you’re not going to mistake the markers for those of a Grand Seiko, but they’re still nicely done. Coupled with the broad, lumed hour and minutes hand and bright orange seconds, legibility is excellent. 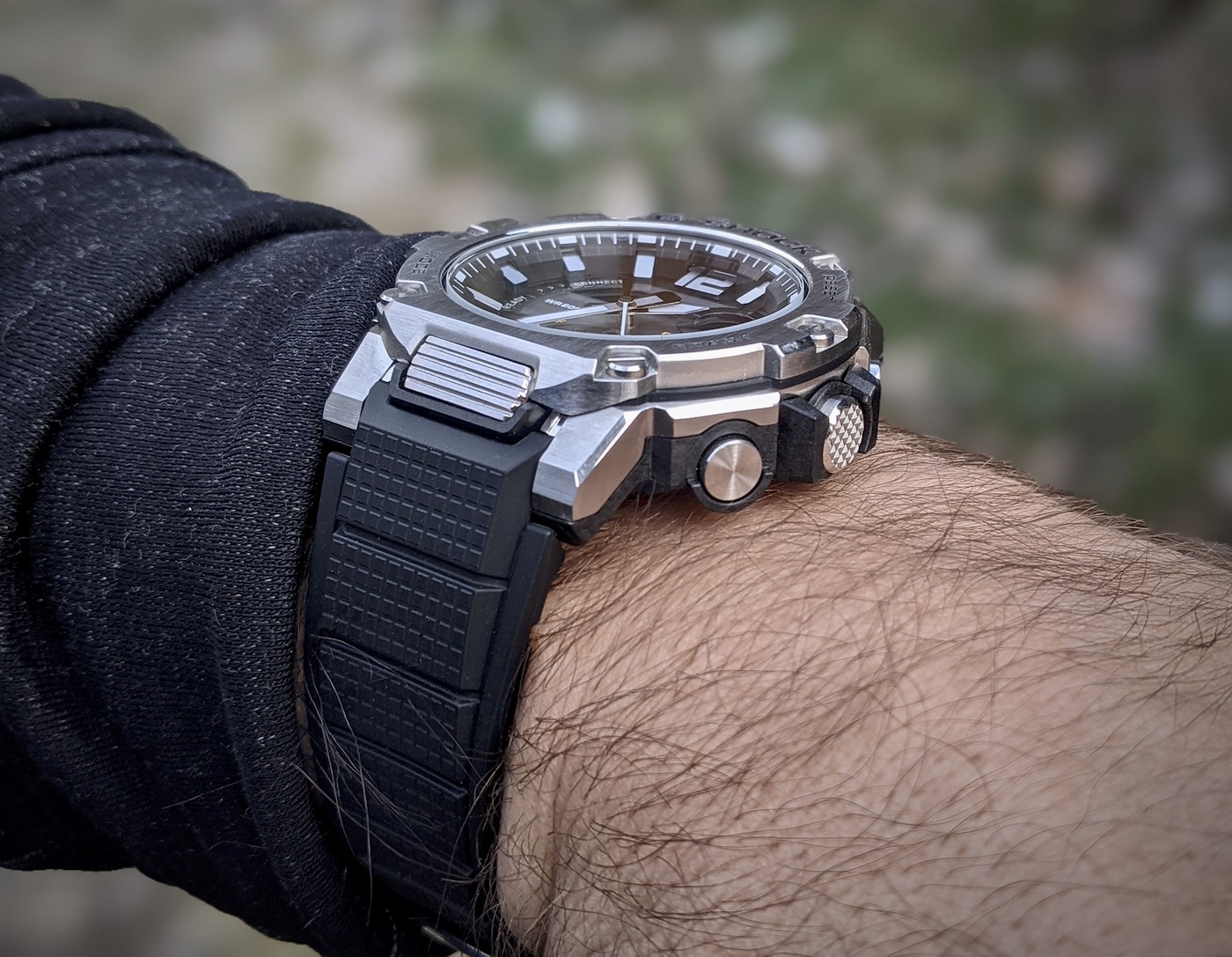 The rest of the dial on the GSTB300S-1A is relatively restrained, with a digital display between 12 o’clock and analog display 6 o’clock. The 6 o’clock dial serves two purposes, housing a power reserve indicator on the left (not that you have much to worry about unless your watch has been sitting in a drawer for 6 months, given that it runs on Casio’s Tough Solar) and a display mode indicator on the right that’s linked to the digital display. The display mode indicator lets you know if you’re in world time (WT), stopwatch (ST), countdown timer (TR), alarm (AL) mode on the upper digital display. Cycling through to the different functions on the watch is quick and easy with no need to go back and check the manual due to the large text on the bezel reminding you of the different functions. The large front button between the lugs simultaneously triggers a backlight for the digital display and a bright Double LED light to illuminate the display 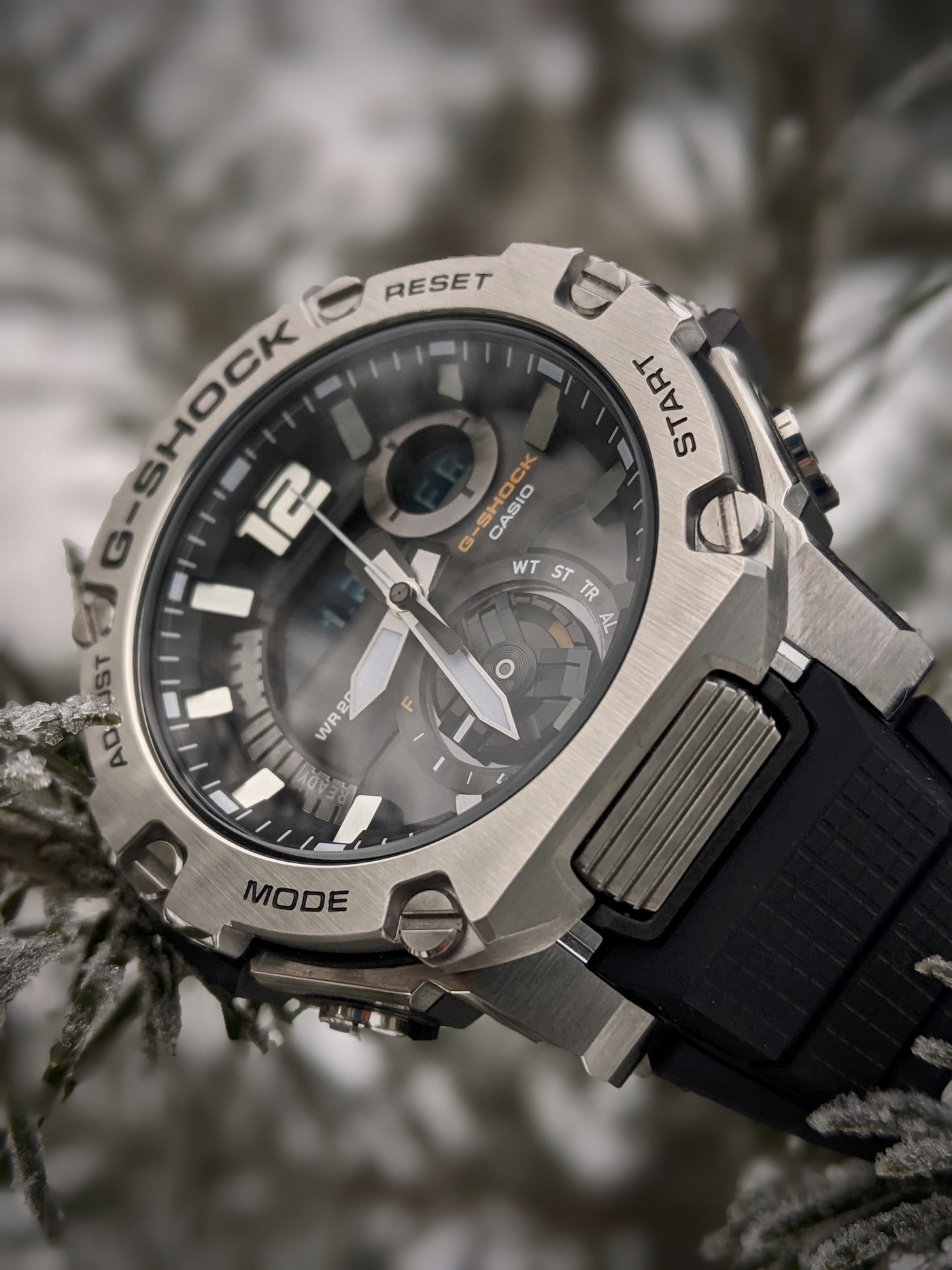 The G-STEEL reviewed here came on a resin strap, which is comfortable and durable, fits the watch’s aesthetic, and keeps it light on the wrist. That said, it is stiff (if you’re familiar with G-SHOCKs, this won’t come as a surprise) and it would be nice if it were a bit more pliable, though in true G-SHOCK fashion they’re not going to sacrifice durability. If you want to go all-in on the steel look, this model is also available on a full steel bracelet for a slight upcharge. 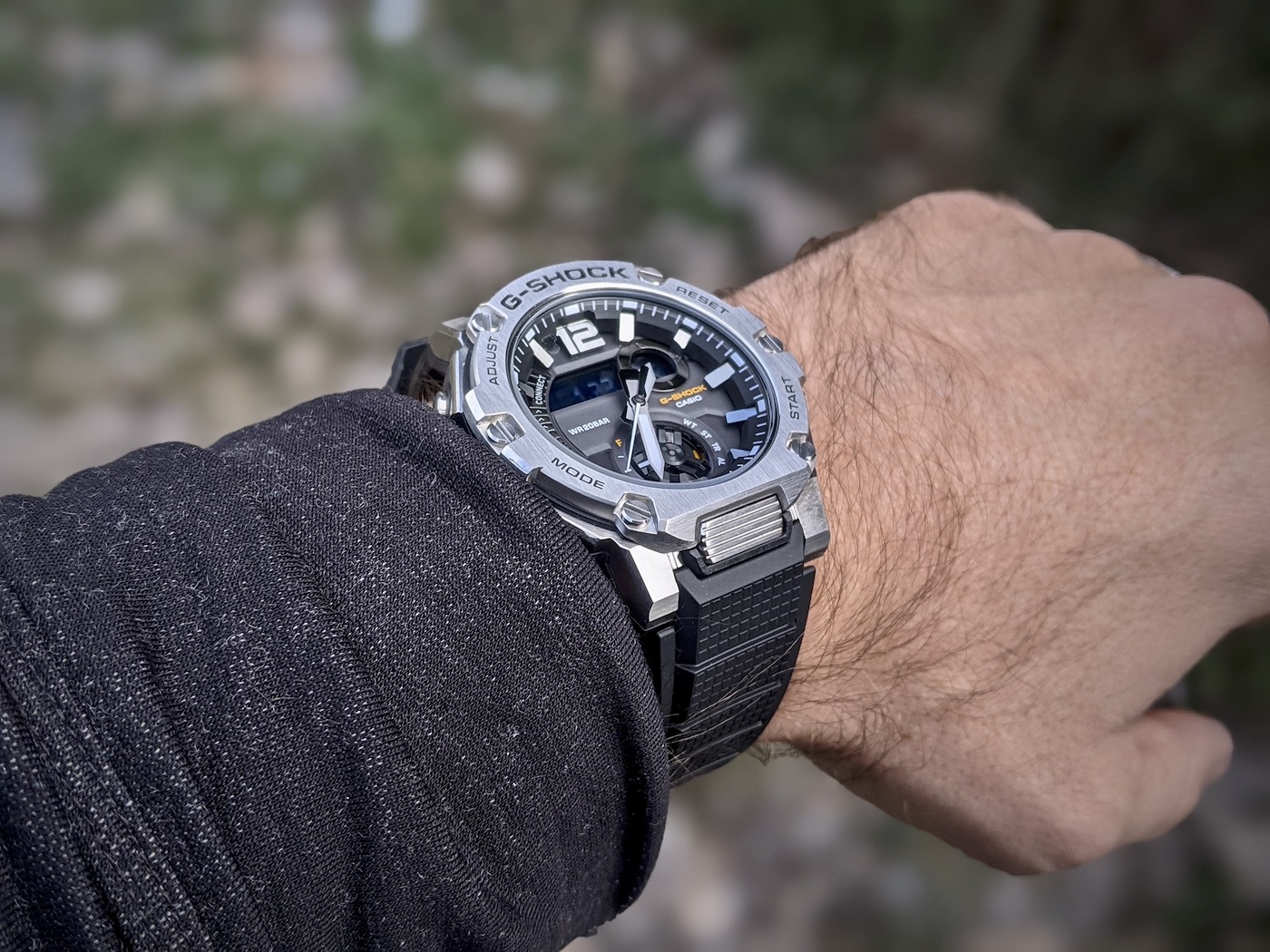 We’ve covered all the details, but ultimately the question is how all the different elements work together as a package. To me, the steel case, large steel hour markers, restrained digital and analog displays all work together to make this one of the more versatile G-SHOCKs currently available – and at an affordable price point. And though this is undoubtedly a large watch at 51mm, Casio knows how to make large watches comfortable. Despite my modest 6.75” wrist, the light weight, molded strap, and short lugs work in in concert to make this plenty comfortable for a daily wear. 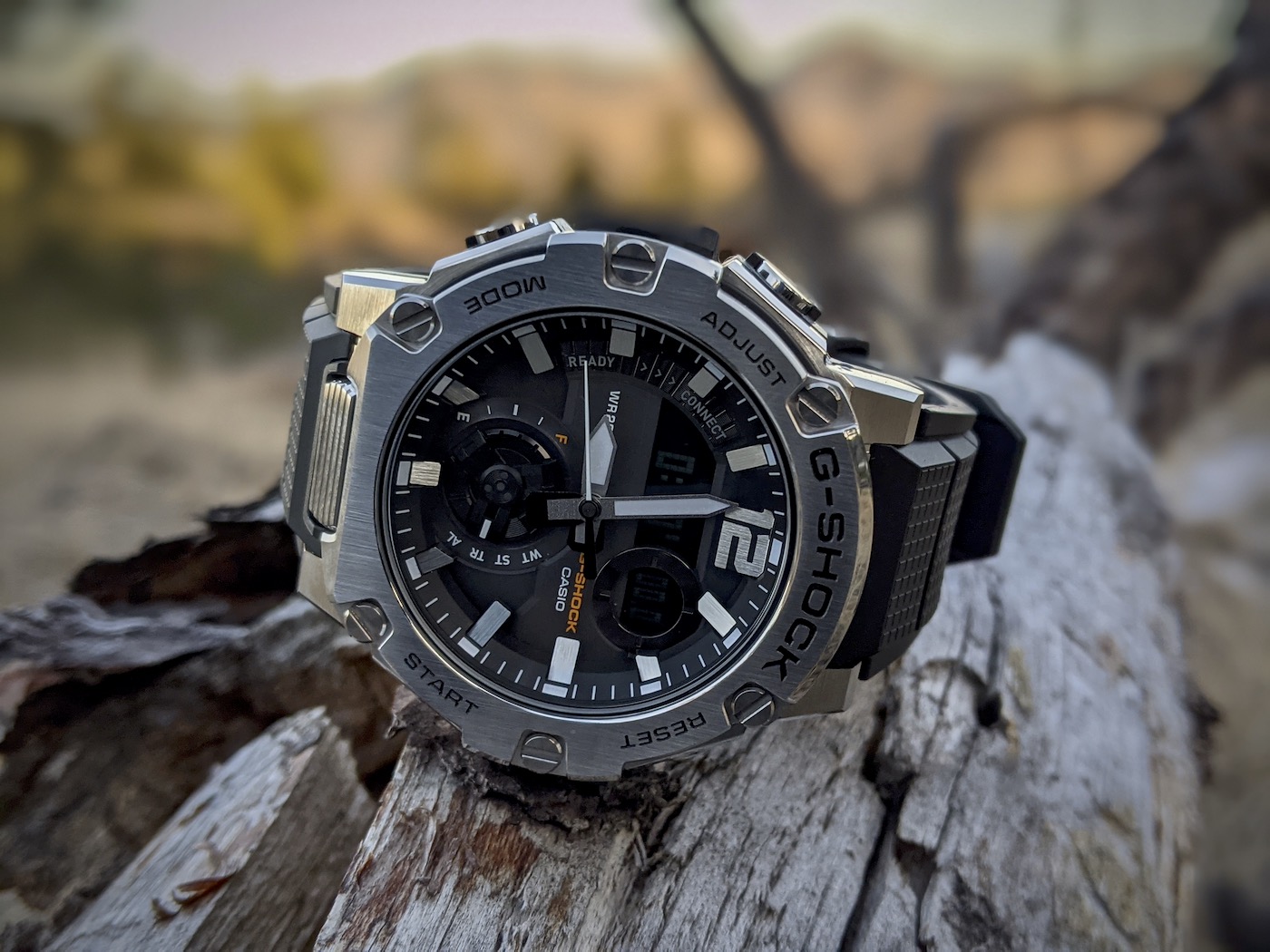 When looking for alternatives, the question isn’t so much which other watches should you consider, but rather, which other G-SHOCKs. If you aren’t necessarily set on an analog display, then the $550 G-SHOCK Full Metal GMWB5000D is an obvious choice. Alternatively, if you’re not as concerned about the steel case, I have to confess that it’s hard to go wrong with the über-popular $99 CasiOak GA-2100. And, if you’re ambitious and willing to void your warranty, the modding community has been going wild with full steel mods of the CasiOak. In my view, the GSTB300S-1A hits the sweet spot in terms of price, functionality, and aesthetics for an attractive and versatile G-SHOCK. The GSTB300S-1A comes in at $330 USD on resin strap or $400 USD on bracelet. For more information on the GSTB300S-1A and other models in the G-STEEL line, be sure to visit the brand’s website.

Necessary Data
>Brand: Casio G-SHOCK
>Model: G-STEEL GSTB300S-1A
>Price: $330 USD
>Size: 51mm-wide, 15.3mm-tall, 50.8mm lug-to-lug
>When reviewer would personally wear it: Heading outdoors or on a trip where I’ll be spending plenty of time outside, but still want a watch that won’t look too out of place in the city.
>Friend we’d recommend it to first: Fan of G-SHOCK that is looking for something a bit more versatile and less aggressive than some of their other offerings.
>Best characteristic of watch: Hour markers and the pops of orange.
>Worst characteristic of watch: Resin bracelet is a bit stiff for my taste.