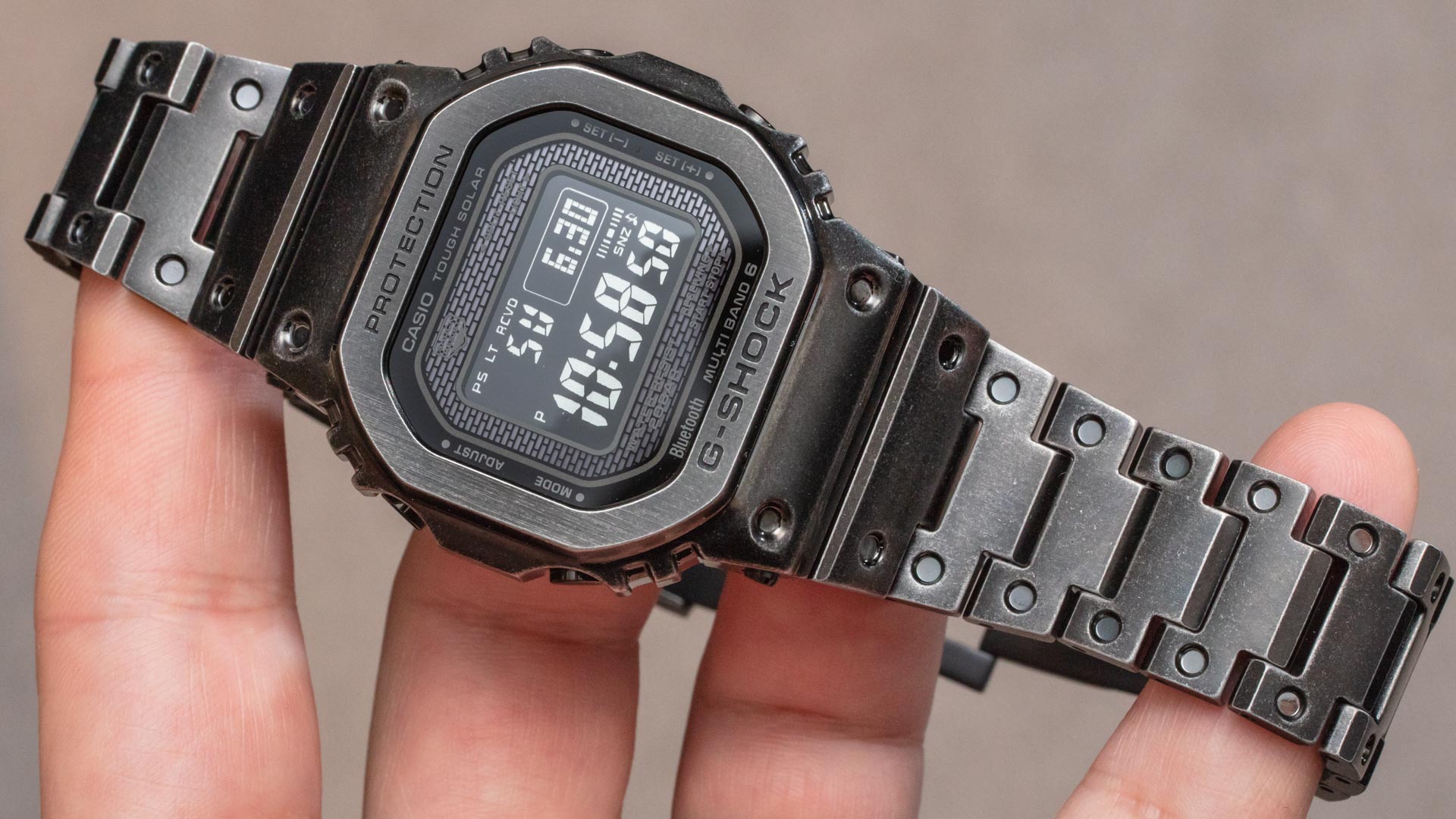 Japan’s Casio enjoyed so much success with the 2018 G-Shock GMW-B5000 watches (aBlogtoWatch hands-on here), that consumers were hard-pressed to find them available in retail stores. I recall hosting an event at a watch retailer last summer where the single GMW-B5000 watch available was sold soon after the event opened. I’ve personally scouted many Casio retailers around the world over the last year and, indeed, found that the GMW-B5000 was a bit of a ghost — and for good reason. What Casio did so well was create a mature but hip version of a core G-Shock look that so many people are after. 2019 continues to see Casio attempt to ramp up production to meet demand for the GMW-B5000 watches and, at the same time, they offer a new “aged IP” flavor of this all-metal G-Shock as the ref. GMW-B5000V (GMW-B5000V-1). 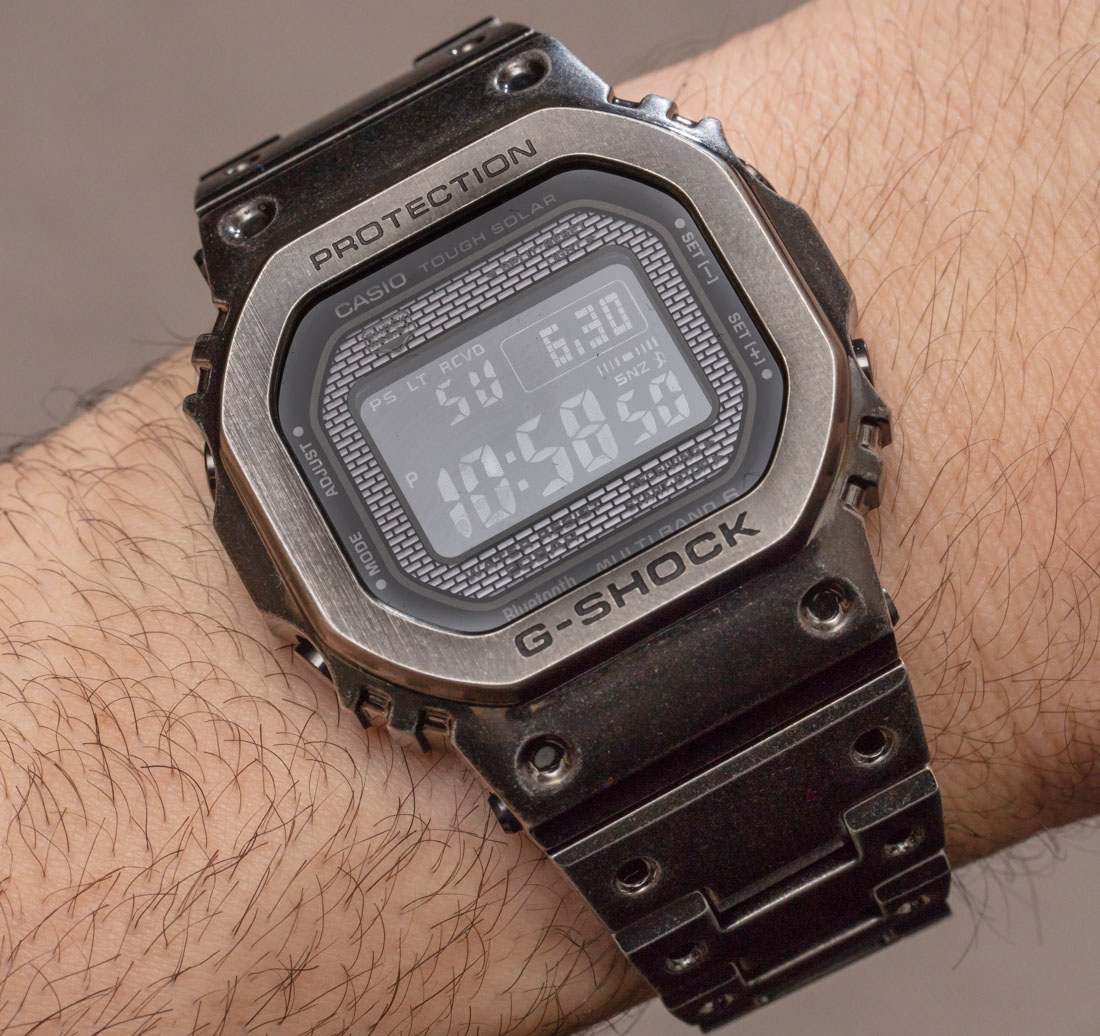 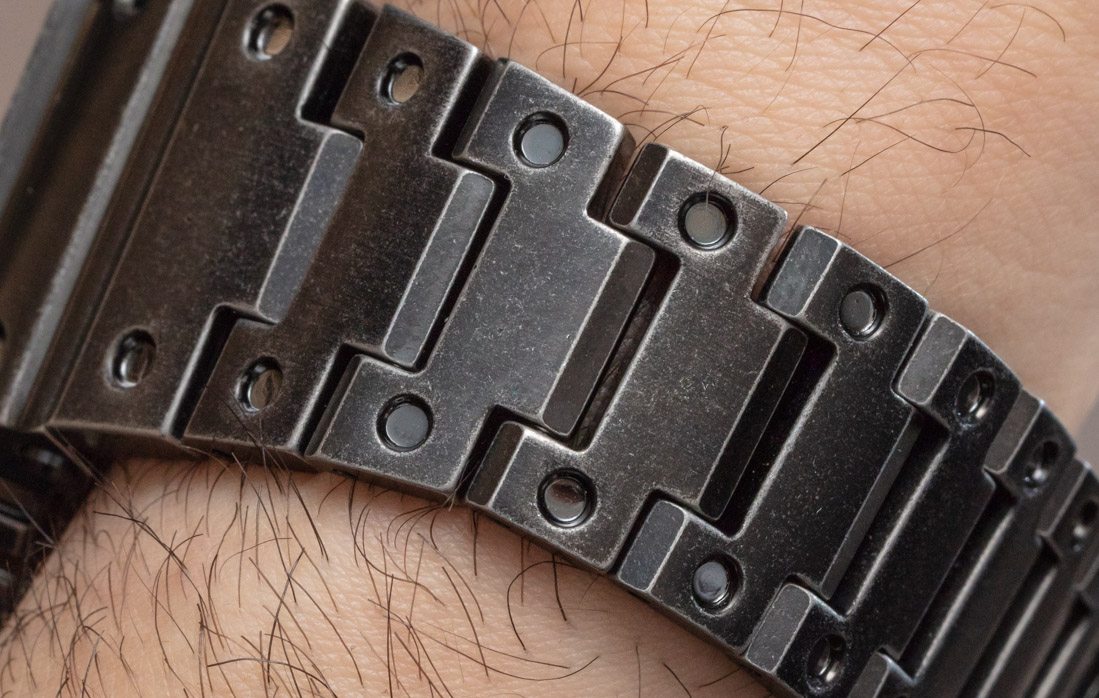 This is one of the first “pre-aged” Casio watches I’ve seen. Japan’s fashion culture certainly loves vintage-style or attractively aged goods, but as far as I know, Casio hasn’t yet really come out with anything that fits that trend. Here we see Casio apply an “artificial aging” technique to the black ion-plated coating over the base steel case and matching bracelet. Casio remarks that the GMW-B5000V undergoes “proprietary aging processing to give a vintage look.” That pretty well sums up what this flavor of the GMW-B5000 “full metal” G-Shock watch is all about. 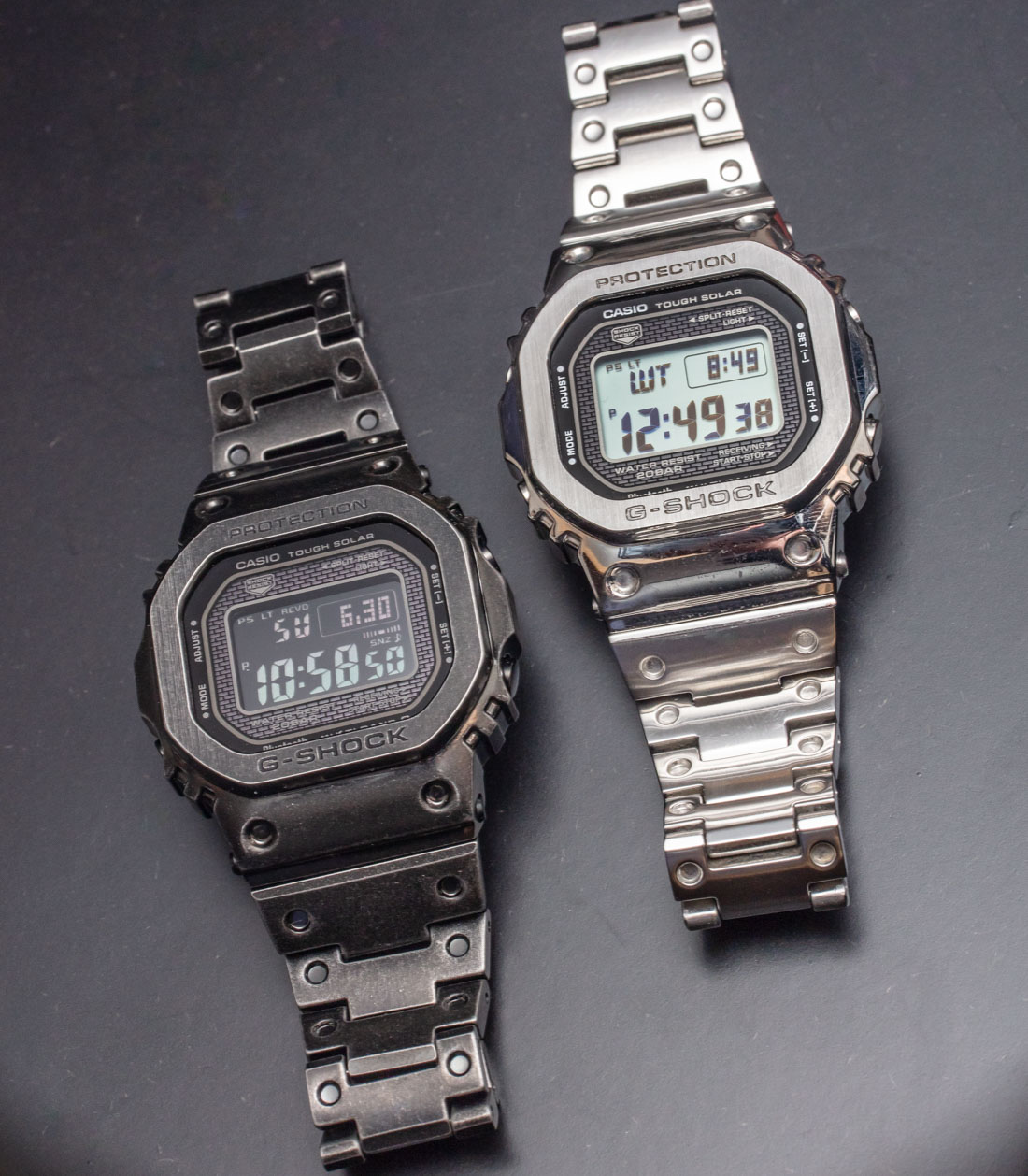 Visually, the GMW-B5000V looks cooler than its description might suggest. In a lot of ways, having a pre-aged timepiece is out of character for Casio. It doesn’t fit with the indestructible theme of the G-Shock watch family, and it doesn’t always jibe with the modern and technological sensibilities of the brand. That said, this out-of-character product is great-looking in person and is certainly very fashionable. I really don’t want to see Casio pumping out “aging processed” watches, but if they produce something like the GMW-B5000V once in a while, I think it could make a lot of sense for the brand and its fans. 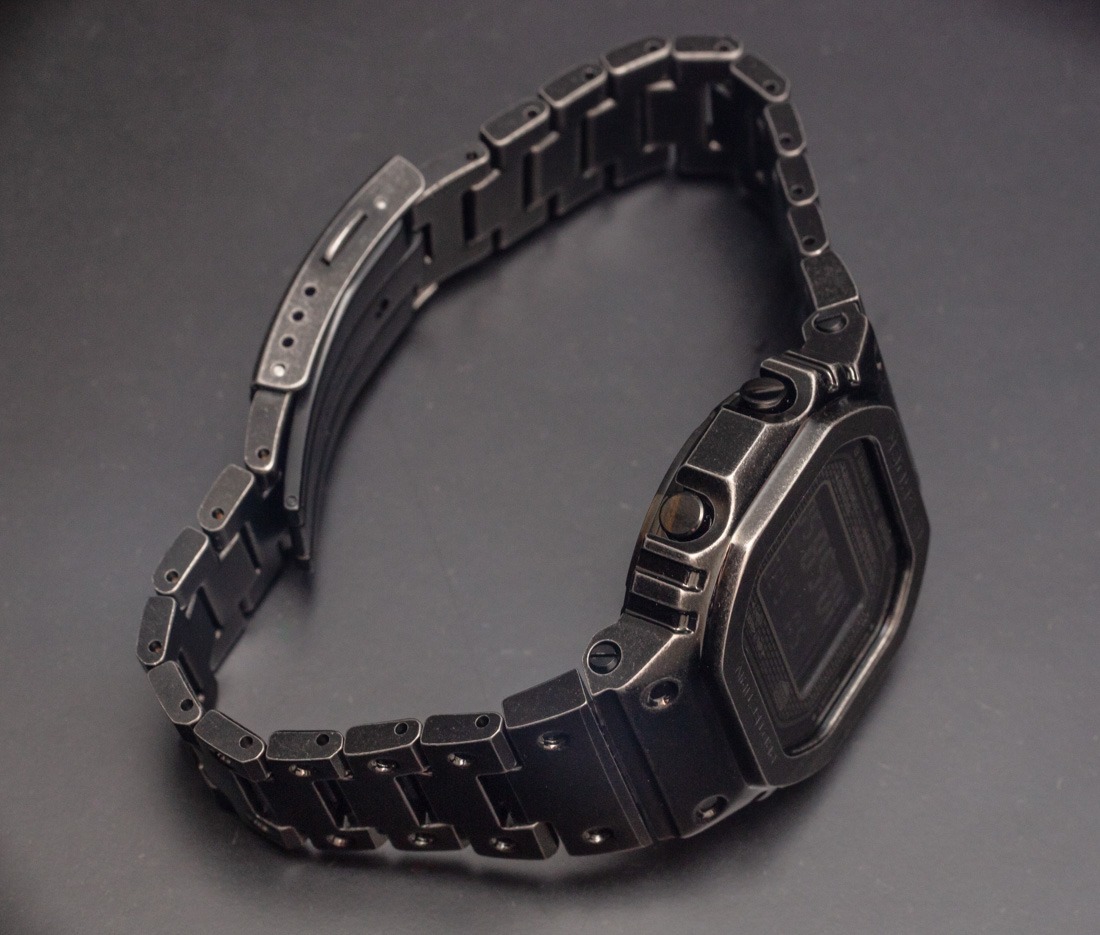 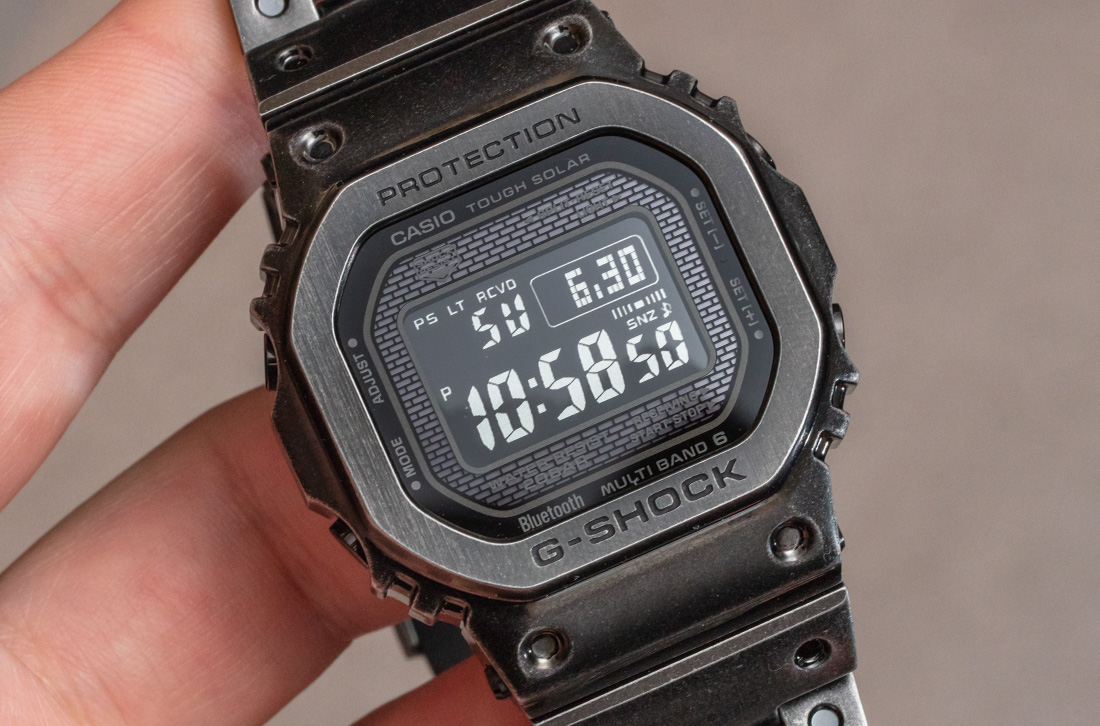 What made the GMW-B5000 collection so popular to begin with was Casio’s skillful mixture of practicality and quality (along with price). The GMW-B5000V-1 is at the top of the price spectrum for the collection at $1,000 but still represents a very good value when you compare it to the pre-aged vintage-style watches offered by many luxury brands. Zenith, for example, does a pretty nice job with its pilot watch collection — if you want to spend at least several thousand dollars more for a watch. 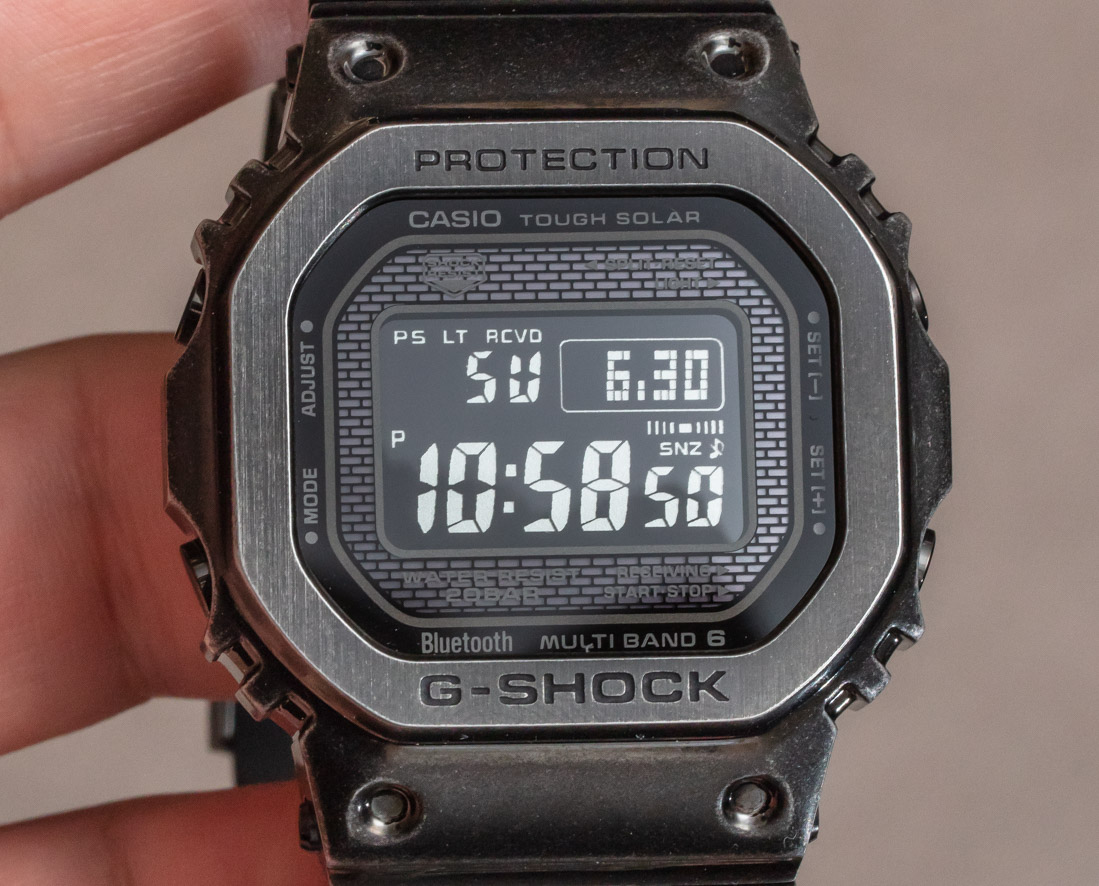 At its best, the GMW-B5000V looks like a G-Shock rediscovered from the 1980s, but for today. The squared case shape, screen design, and bracelet all feel like elements of 1980s Casio. But this is a high-end G-Shock product complete with a well-polished and -designed case, DLC-coated caseback (not aged), and a Bluetooth-connected solar-powered digital quartz movement. Speaking of Bluetooth, it is an absolute joy to control your G-Shock watch with the G-Shock Connected app. I recommend that for anyone who hasn’t tried it yet and gets one of today’s Bluetooth connected G-Shock products. 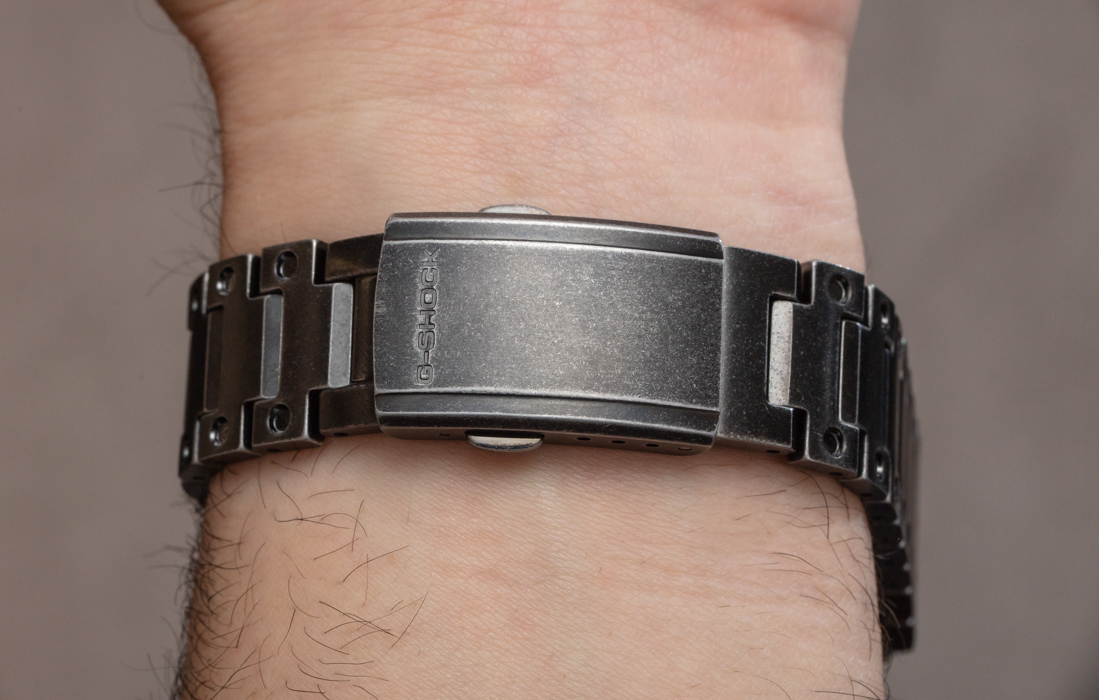 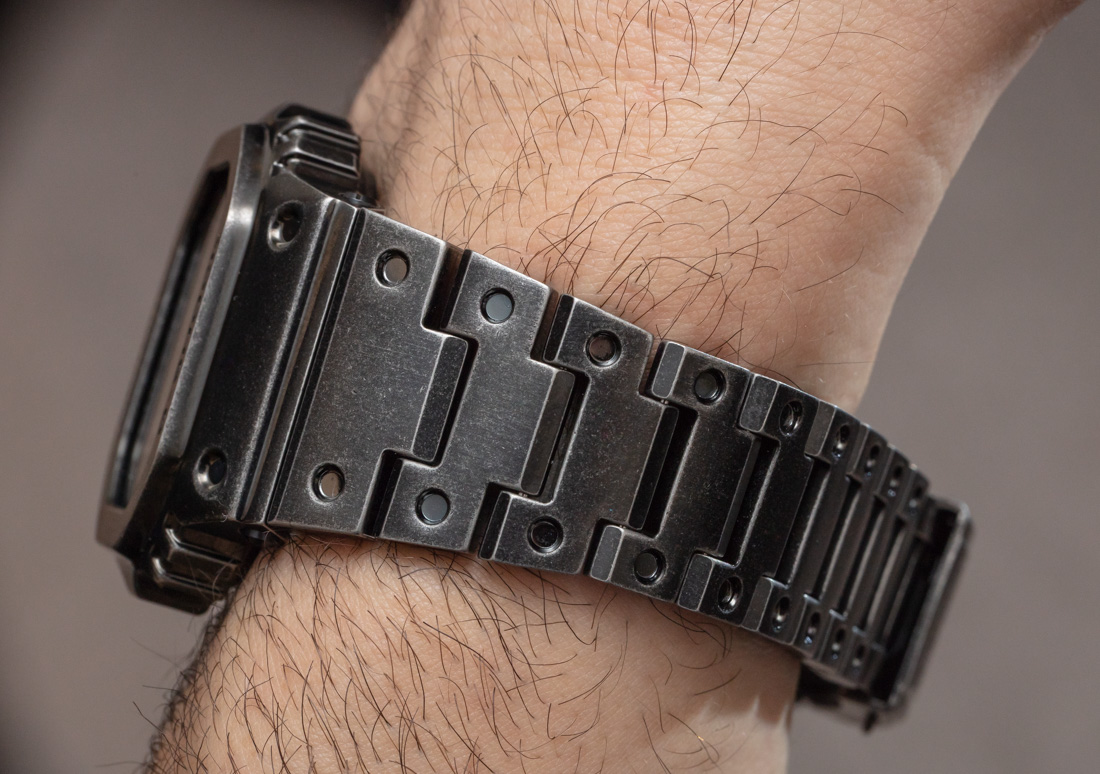 Even though the GMW-B5000V has a “full metal” structure, it features all the engineering and case construction techniques necessary to offer the class-defining durability of a G-Shock watch (including 200 meters of water resistance and massive shock protection). All of that sits on the inside of the watch, offering a quality user experience, while the attractive and nostalgic case shape and negative (dark) LCD screen add to the hip aged look of the case and bracelet. This isn’t the Casio G-Shock GMW-B5000 watch for everyone, but as a unique and fashionable flavor, the pre-aged G-Shock GMW-B5000V-1 is a solid choice. Price is $1,000 USD. See more at the Casio G-Shock website here.