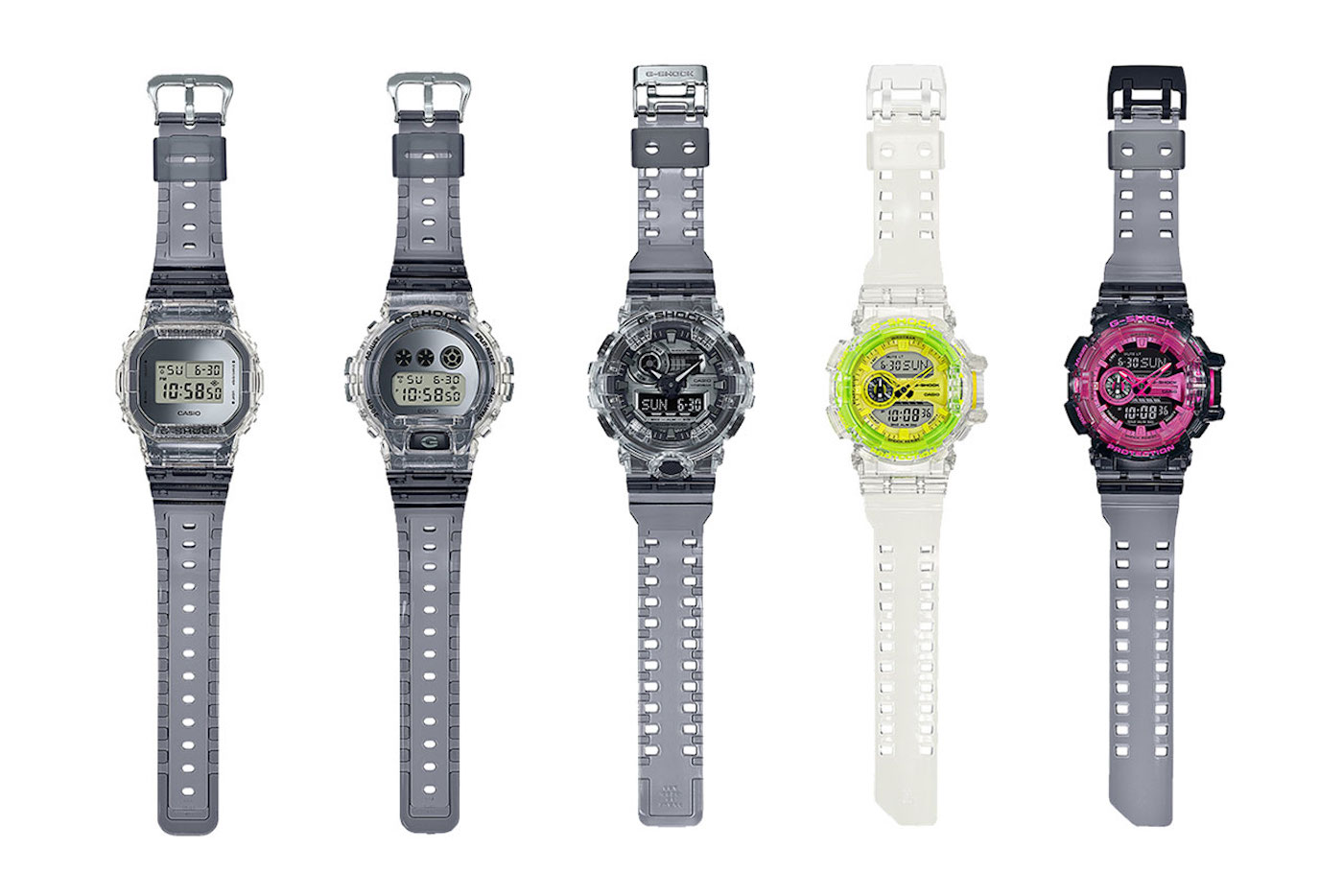 Summer is here, which means it’s the perfect time to expand your Casio G-Shock collection. With five (more) new watches utilizing Casio’s “skeleton” cases, the Casio G-Shock Clear Skeleton Series is a fun and accessible collection that manages to not take itself too seriously but still offers great value. This release was, no doubt, buoyed by the popularity of last year’s Casio G-Shock Glacier Gold 35th Anniversary Limited Edition ‘Jelly G’ Collection, which also showcased Casio’s unique take on the notion of skeletonization. 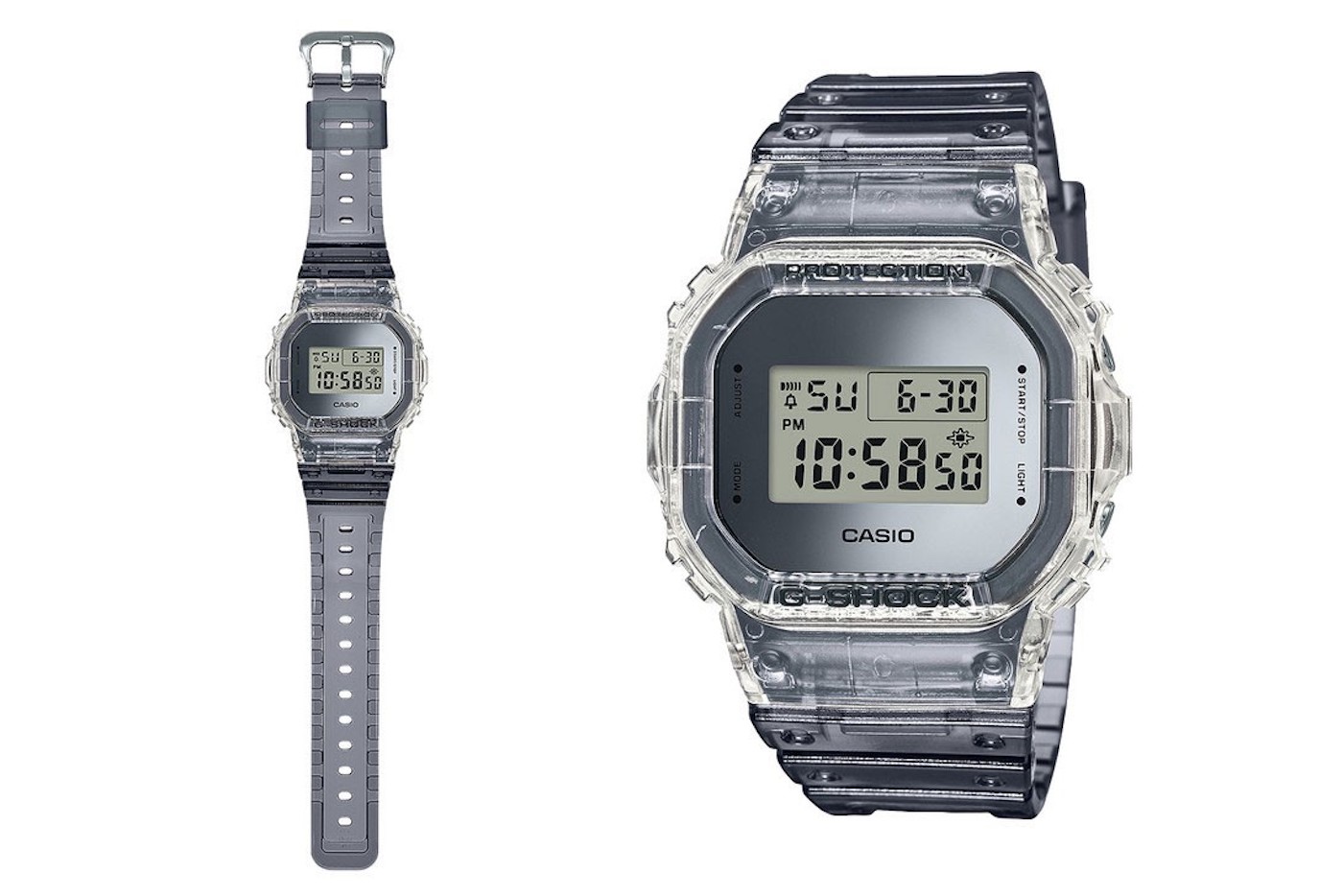 For most watchmakers, skeletonization would mean the removal of movement material so as to display the inner workings of the watch; for Casio, however, it means wrapping a quartz module in a translucent case. The result is certainly not for everyone, but is definitely a welcome option when it comes to the more lighthearted daily wears. The Casio G-Shock Clear Skeleton Series includes five new pieces, two of which use traditional digital displays, while the other three are the evermore ubiquitous analog-digital hybrid style.

References DW-5600SK-1 and DW-6900SK-1 are fully digital (no hands at all) and come in transparent gray cases. Both models have a mirrored screen surround, which gives them a very futuristic look. These two pieces both use a positive display (black numbers on a light background), as does the GA-400SK-1A9, which is, arguably, the most striking watch in the Casio G-Shock Clear Skeleton Series, with its totally clear case and strap combined with a lemon- and lime-flavored bezel. 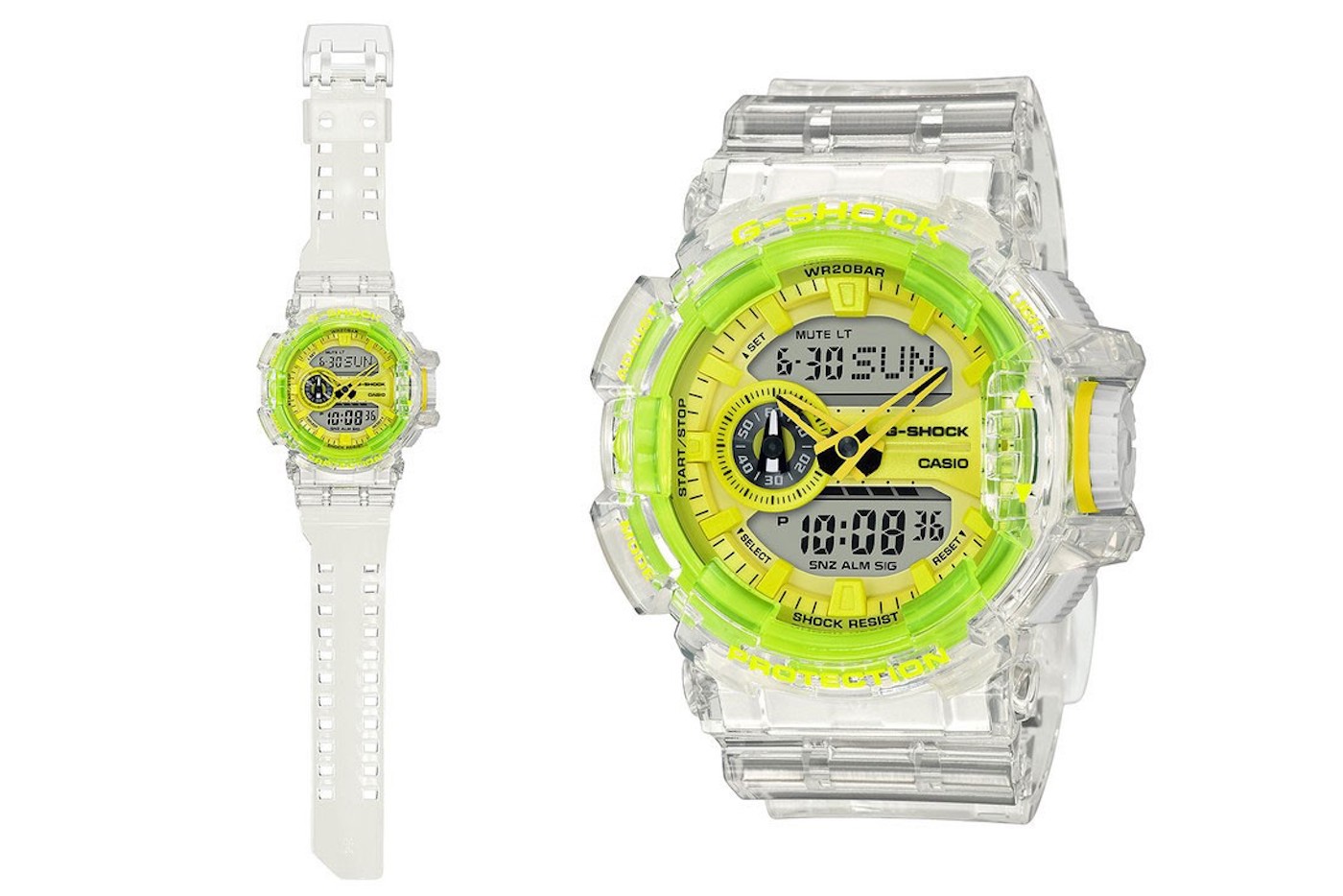 Casio has taken the best and brightest tropes of the 90s and packaged them in a very modern proposition. The watches (fitted with batteries that will reputedly last 5-year) all benefit from the superior modern manufacturing techniques that their predecessors had to do without. The Casio G-Shock Clear Skeleton Series is a seriously cool and versatile callback to an era that is looked upon fondly by many of the brand’s fans. 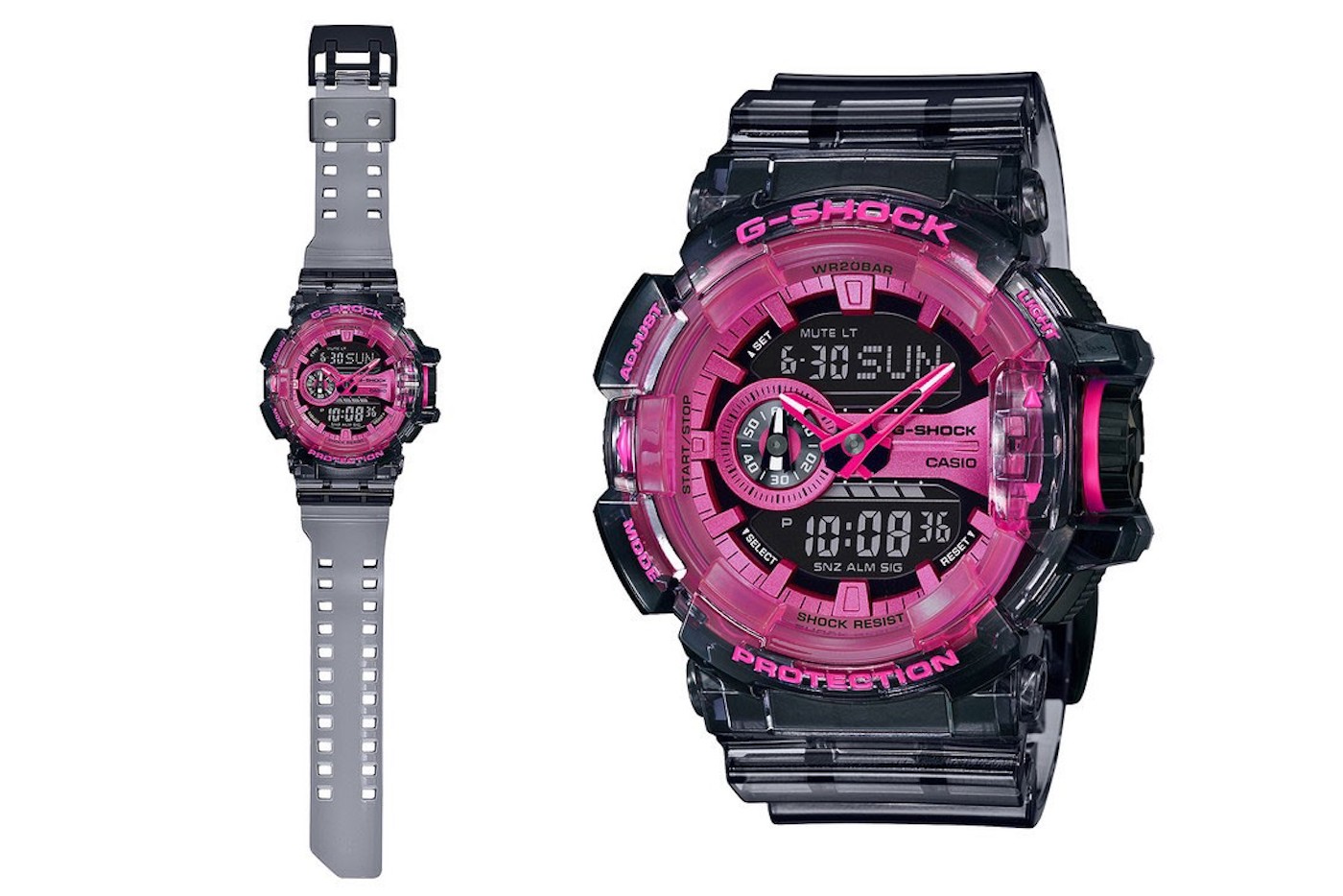 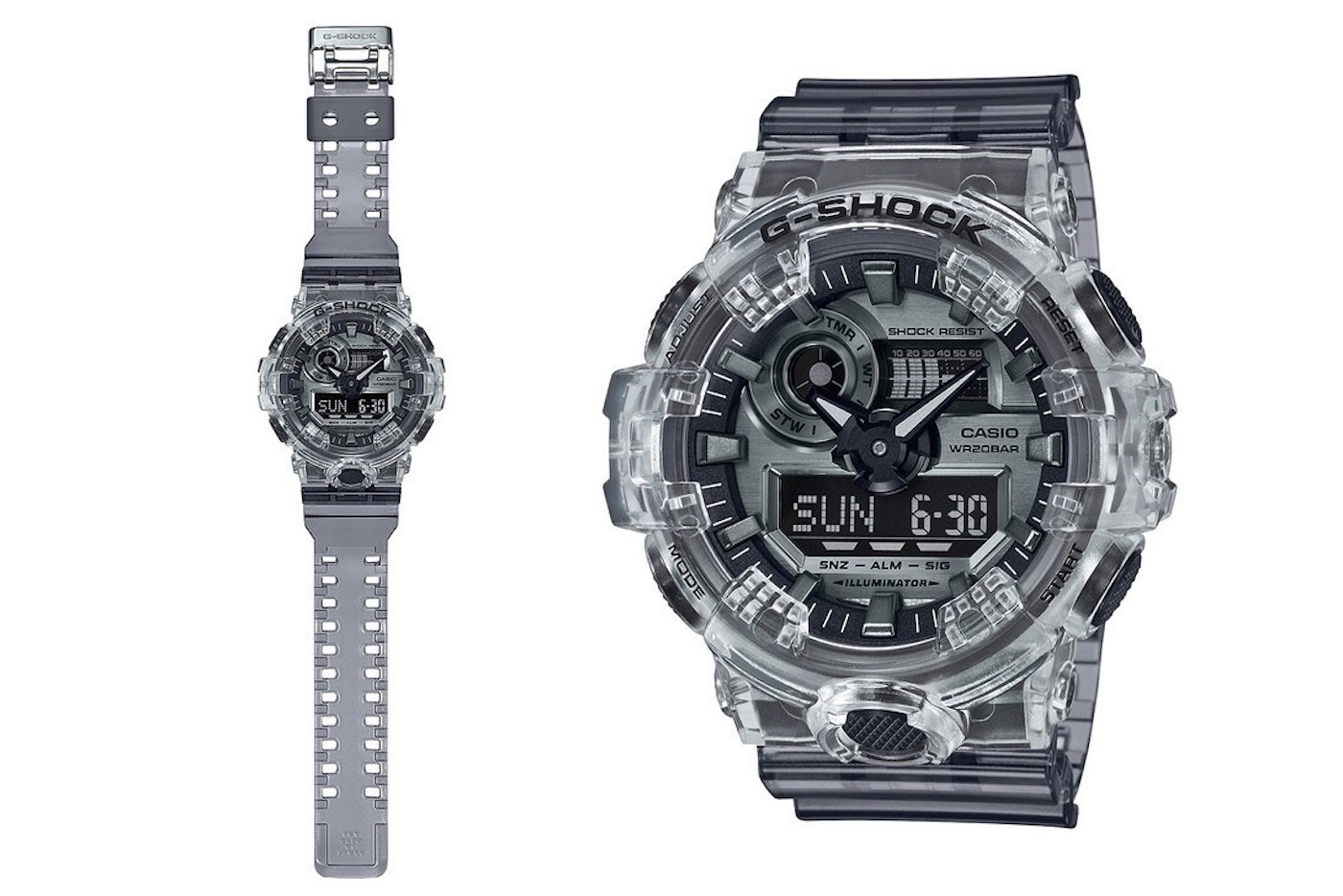 And that’s what makes watches like these so fun to wear (and so rewarding to collect). With a few exceptions, Casio’s entire range is super–affordable. It’s a great way to build a coherent collection that will be appreciated by a wide portion of the global watch community on a budget. Case in point: The DW5600SK-1 and DW6900SK-1 retail for $110, the GA700SK-1A for $120, the GA400SK-1A4 and GA400SK-1A9 for $140 apiece. Learn more at casio.com.