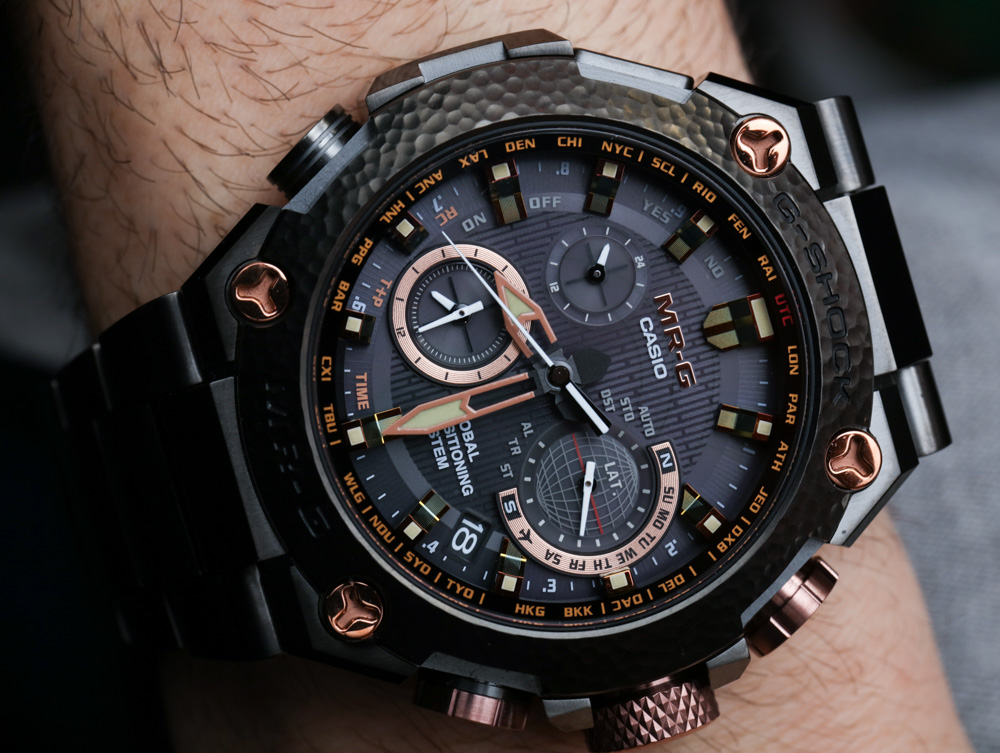 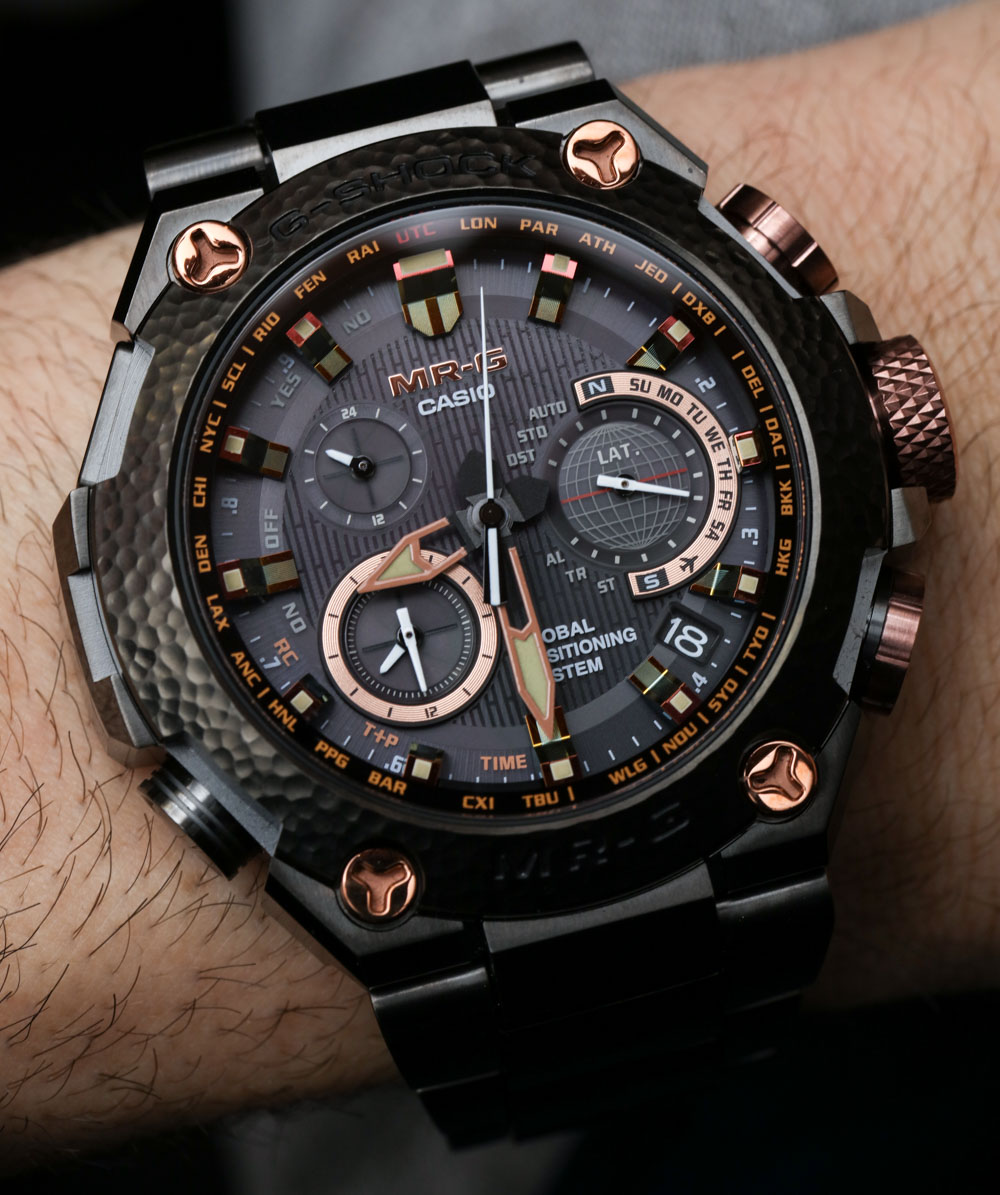 A big part of me wants to splurge on elaborately decadent Japanese watches from time to time. Well, in fact, I do… High-end Japanese watches come in a range of forms from more classically conservative watches by Citizen and Seiko, to “luxury Mr. G” G-Shock sport watches from Casio. This new-for-2016 “Hammer Tone” MRG-G1000GT (aka MRG-G1000HT-1A, MRG-G1000HT-1AJR) is one of those, being a limited-edition G-Shock model that combines unparalleled durability with cool technology… and hand-craftsmanship. 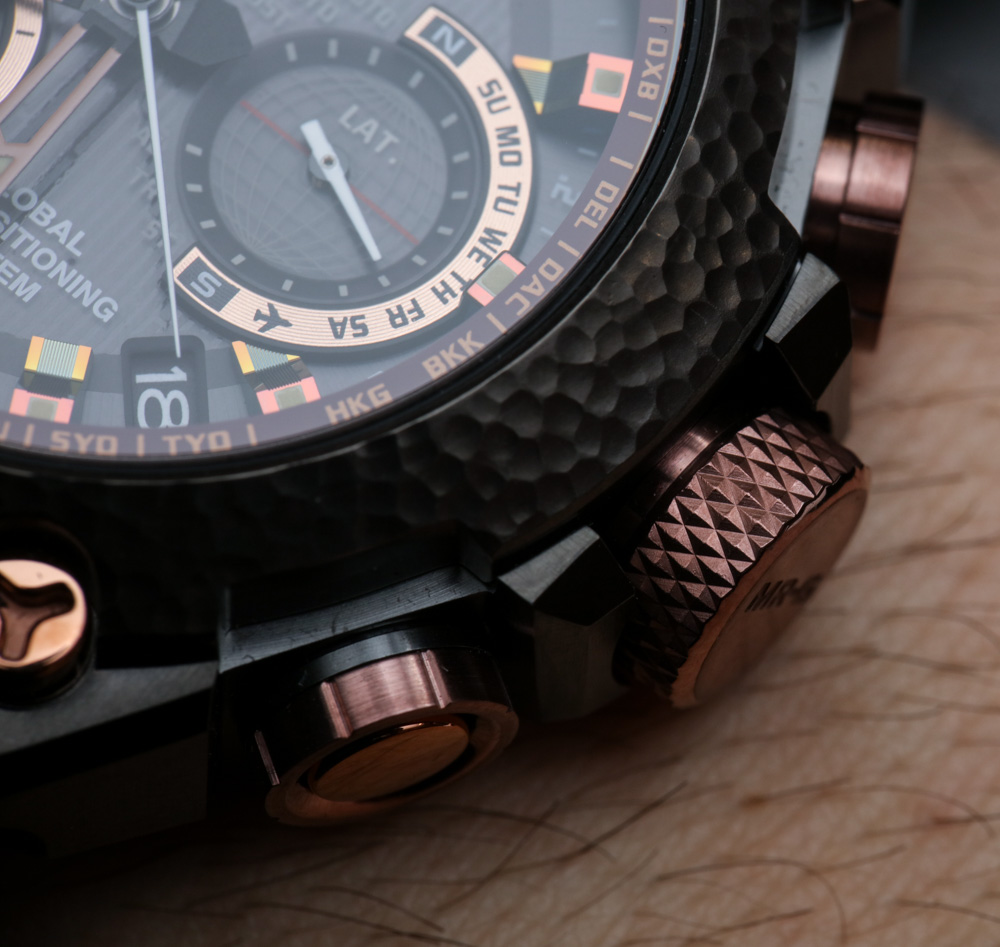 Casio is said to have released this Casio G-Shock MRGG1000HT Hammer Tone watch in celebration of the 20th anniversary of its gutsy MR-G collection of high-end G-Shock watches. aBlogtoWatch went hands-on with the base model that this MRG-G1000HT builds on back in 2014 with our look at the Casio G-Shock MRG-G1000 here. If you recall, what was important about this $3,000 model was its GPS satellite synchronization system for accuracy, combined with the titanium case and host of “world-proof” durability features. This limited edition model is more than twice the price of the base MRG-G1000, but adds a degree of style and Japanese culture in the hand-beaten “hammer tone” bezel and middle links on the bracelet. 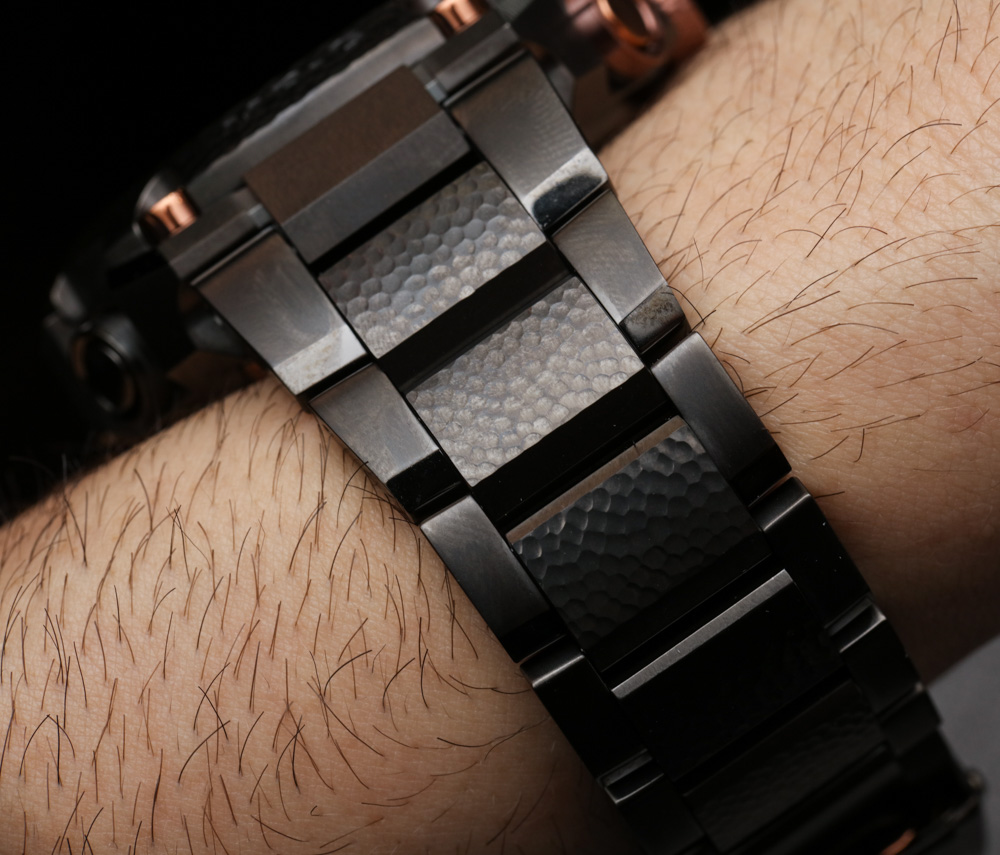 Casio calls this hammer-beaten-metal technique “tsu-i-ki,” and it has been used in various types of Japanese traditional craft as well as in similar forms elsewhere. The work is done in Kyoto, Japan, by metalwork craftsman Mr. Bihou Asano. Beating metal with a small hammer is among the only ways to get it shaped in particular ways without stamping or machining – so we even see it today in custom car creation. The intentionally organic look of the beaten metal is interesting, and overall, the titanium and copper alloy watch has a unique mixture of modern looks with a sort of aged appeal. If steampunk is fantasy old-tech with age, then this is circuitpunk, with a watch that looks right out of anime science fiction that has a semi-vintage flair to it. Maybe “circuitpunk” as a term will stick…

Casio is only making 300 of these limited edition Casio G-Shock MRGG1000HT Hammer Tone watches, which is an interesting number given the price of the watches. With that said, I think most of them will sell. The idea of a high-end quartz G-Shock might be odd to most traditional watch lovers, but if you clear your mind, put one of these in your hands, and just consider it, then it all sort of begins to make sense – the tech, durability, artistry, and Japanese-ness of the product all flow together. It isn’t going to be for everyone’s tastes, but it is a cool product, for sure, if you can pull it off. 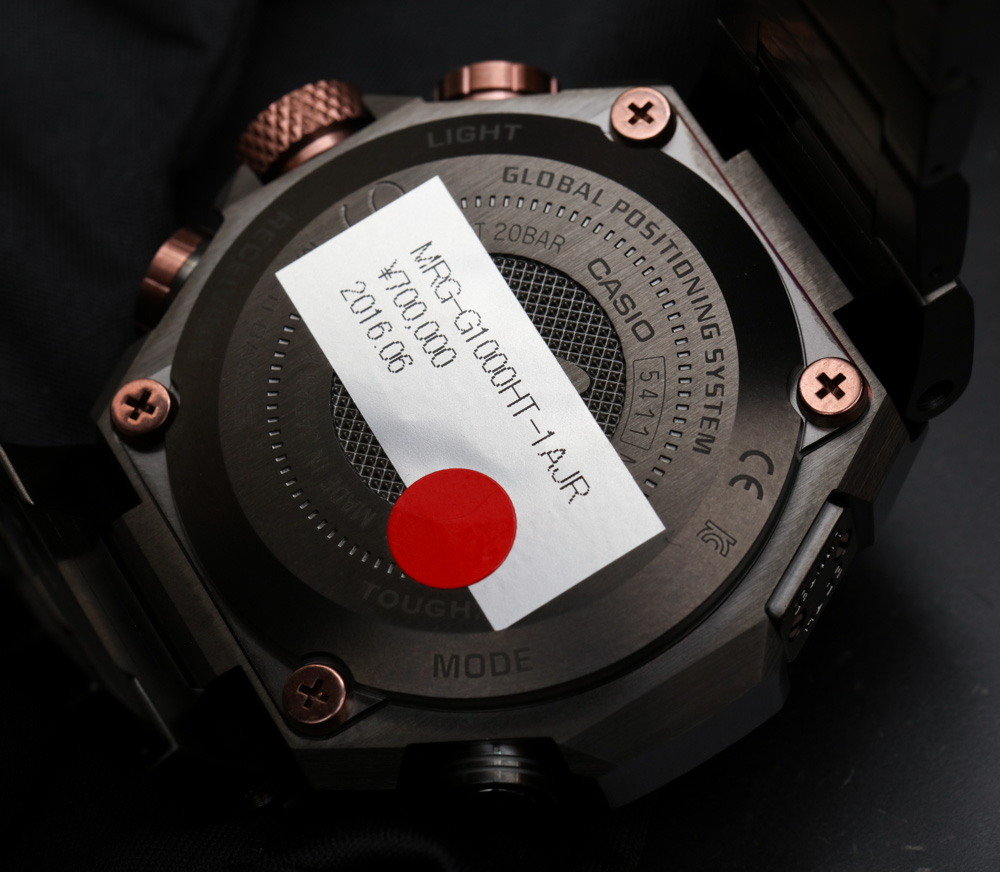 Most of the Casio G-Shock MRGG1000HT Hammer Tone case is in DLC-coated titanium, while the hammer-beaten parts are in a copper alloy that is, according to Casio, 3-5% gold. The case is a big 54.7mm wide (which is oddly always wearable in G-Shock form), 16.9mm thick, 153 grams in weight, and has an AR-coated sapphire crystal as well as 200 meters of water resistance. I won’t go into all the little durability details, but for brevity, the best way of explaining G-Shock watches is that they are timepieces with various types of armor. All G-Shock watches have functional armor, and watches like the MR-G series have increased armor as well as sometimes decorative armor. 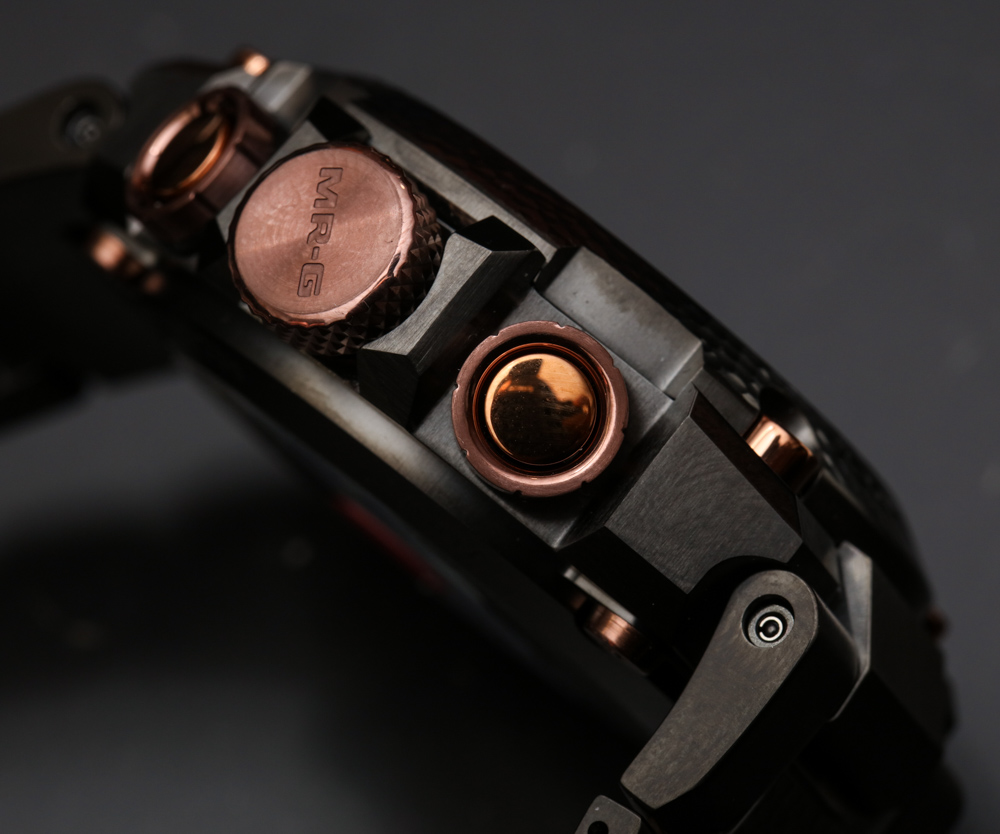 It is fun to hear the people at Casio speak about MR-G watches because they refer to them as “Mr. G,” which is perhaps their proper name. Mr. G is a title, and one with deference. Compared to standard G-Shock watches, “Mr. G” is more mature, more dignified, and certainly more prestigious. G-Shock collectors understand this, but many mainstream watch consumers still struggle with the idea of spending a few thousand dollars on a G-Shock – which is similar for many high-end Japanese watches, actually. It’s really a perception thing, as well as an overall bias against “technology watches,” given the often misaligned perception that their construction is cheap. That just isn’t true, as these timepieces are just as hand-assembled as most high-end mechanical watches. Moreover, the case parts and materials are carefully machined and finished in a way reserved for Casio’s finest. 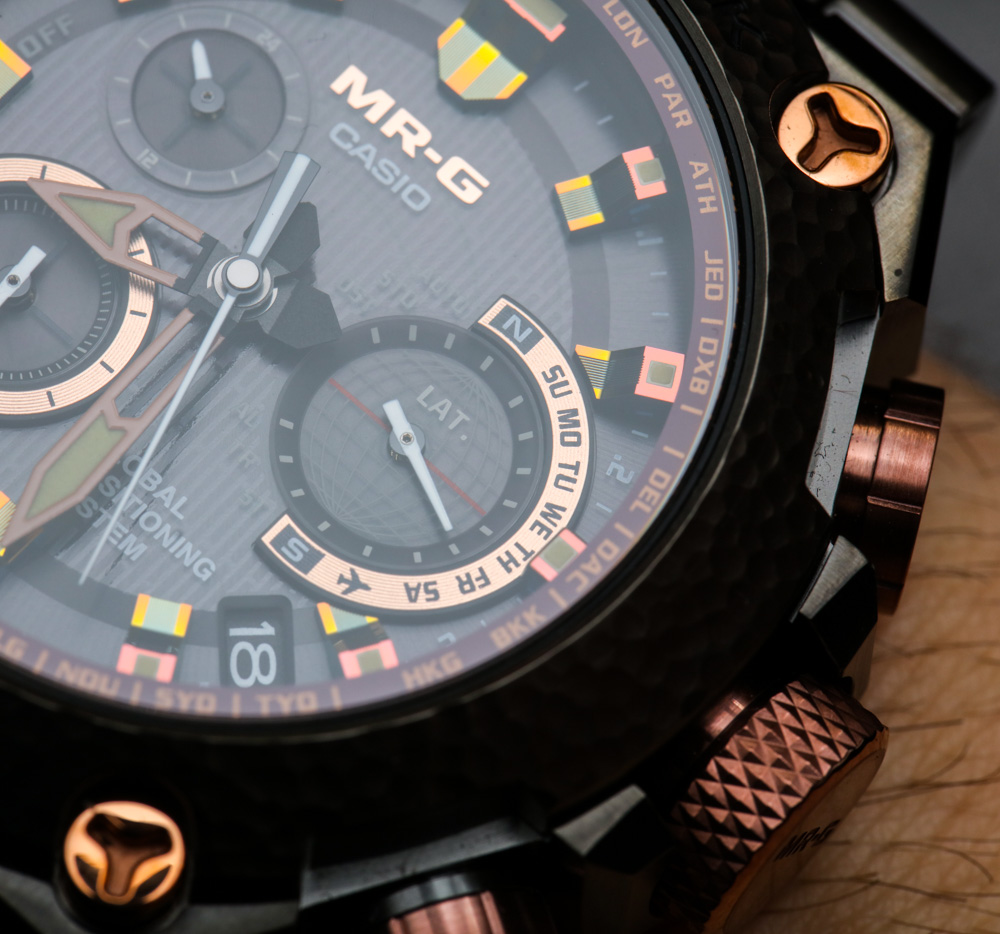 Inside the G-Shock MRG-G1000 watch is a “GPS Hybrid Wave Ceptor” movement that is their “5411 module.” The movement is light/solar powered and combines both atomic click radio signal reception as well as reception from GPS signals for time and calendar accuracy anywhere in the world. I still don’t know the full value of having both atomic clock radio control and GPS, but Casio uses this “hybrid” technology as a means to help them differentiate their GPS watches from those of Citizen and Seiko. The all-analog quartz movement indicates the time, 40-zone world time, 1/20th of a second chronograph, countdown timer, alarm, and full calendar. The movement also uses an LED backlight in addition to the luminous material coating on the hands and hour markers. Once again, you have a super-durable, always accurate, high-end Japanese watch with “Tough Solar” (“Tough” means the hands can re-align themselves if subject to shock) that never needs a battery change. It’s like the reverse of a Swiss mechanical watch that needs regular attention. 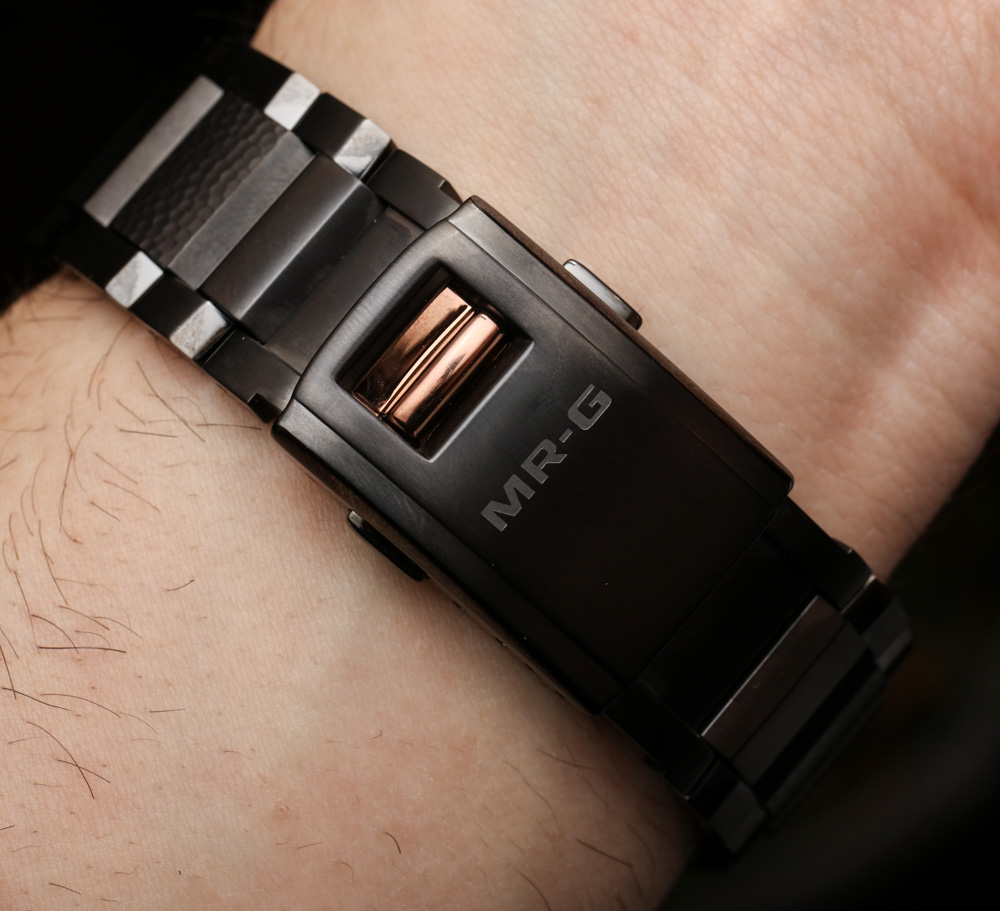 Little details make MR-G watches cool such as the sliding lock on the bracelet and the limited edition number plaque on the side of the case. This isn’t the highest-end Casio ever made, but it is up there, and shows the current apex of what consumers can expert when wanting to go to the top of the brand. I think a lot of watch and Casio lovers will appreciate the Casio G-Shock MRGG1000HT Hammer Tone, but the price is going to be difficult to overcome. This might be one of those gems to find on the second-hand market a few years down the road at a more accessible price. 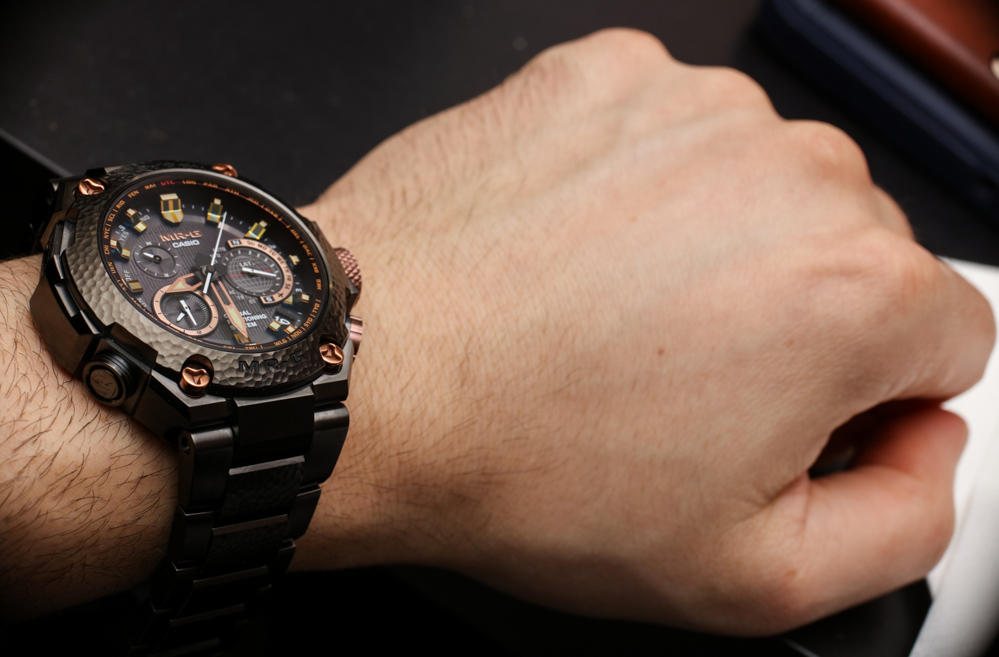 In fact, that is one of the interesting things about many of these high-end Japanese watches – that demand is high, but willingness to pay (despite the actual value and effort put into these pieces) is less high. So what you end up with is a lot of people who want these watches but few who can afford them. The Japanese brands do great at putting all the right stuff in the watch, but they still lag behind the Europeans when it comes to branding and asserting that “luxury image” high-street consumers are willing to pay for. That simply adds charm and niche appeal to an otherwise fantastically “different” collection of luxury watches. Once again, limited to 300 pieces, the Casio G-Shock MRGG1000HT Hammer Tone watch is priced at 700,000 yen, or $6,200 USD. gshock.com