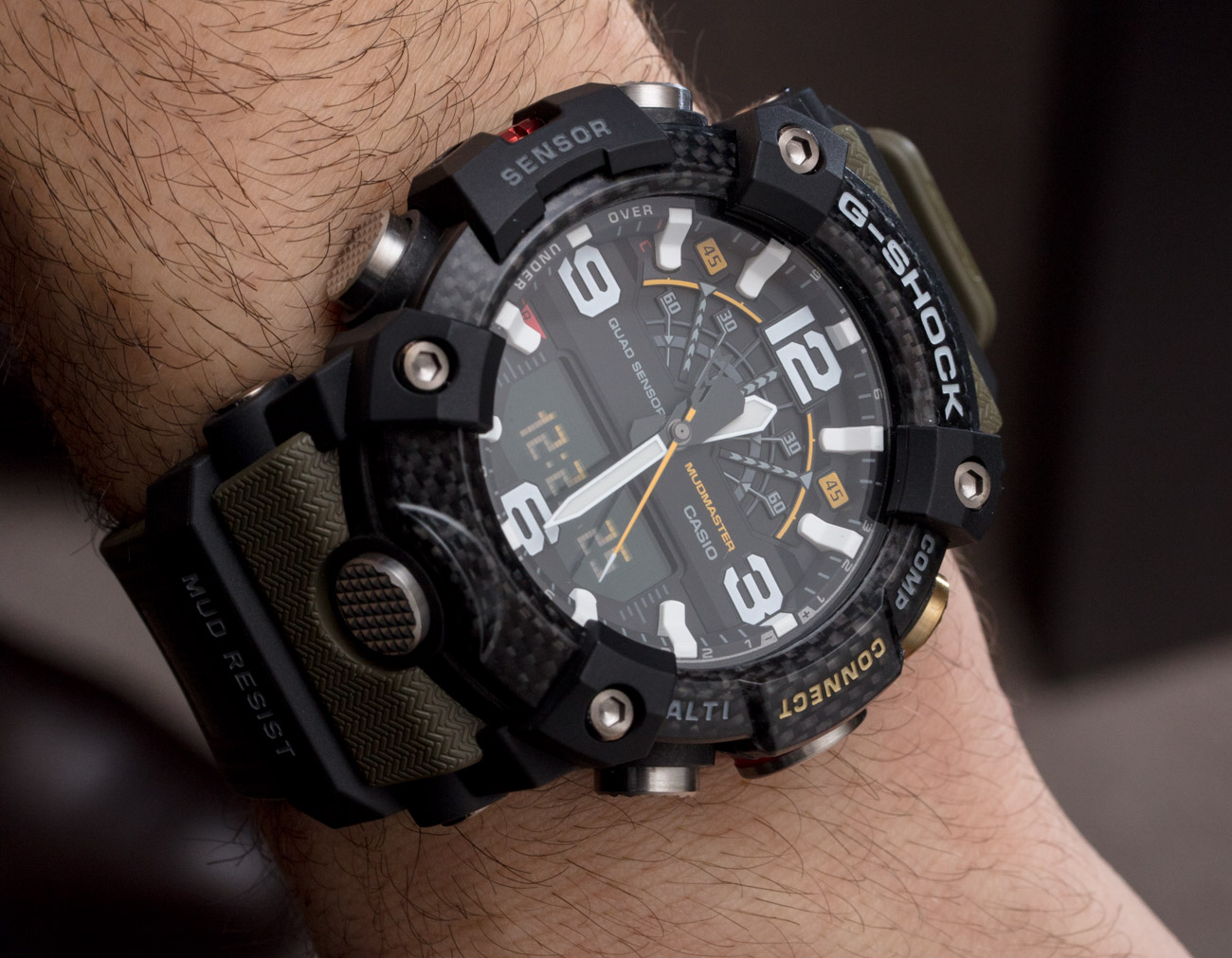 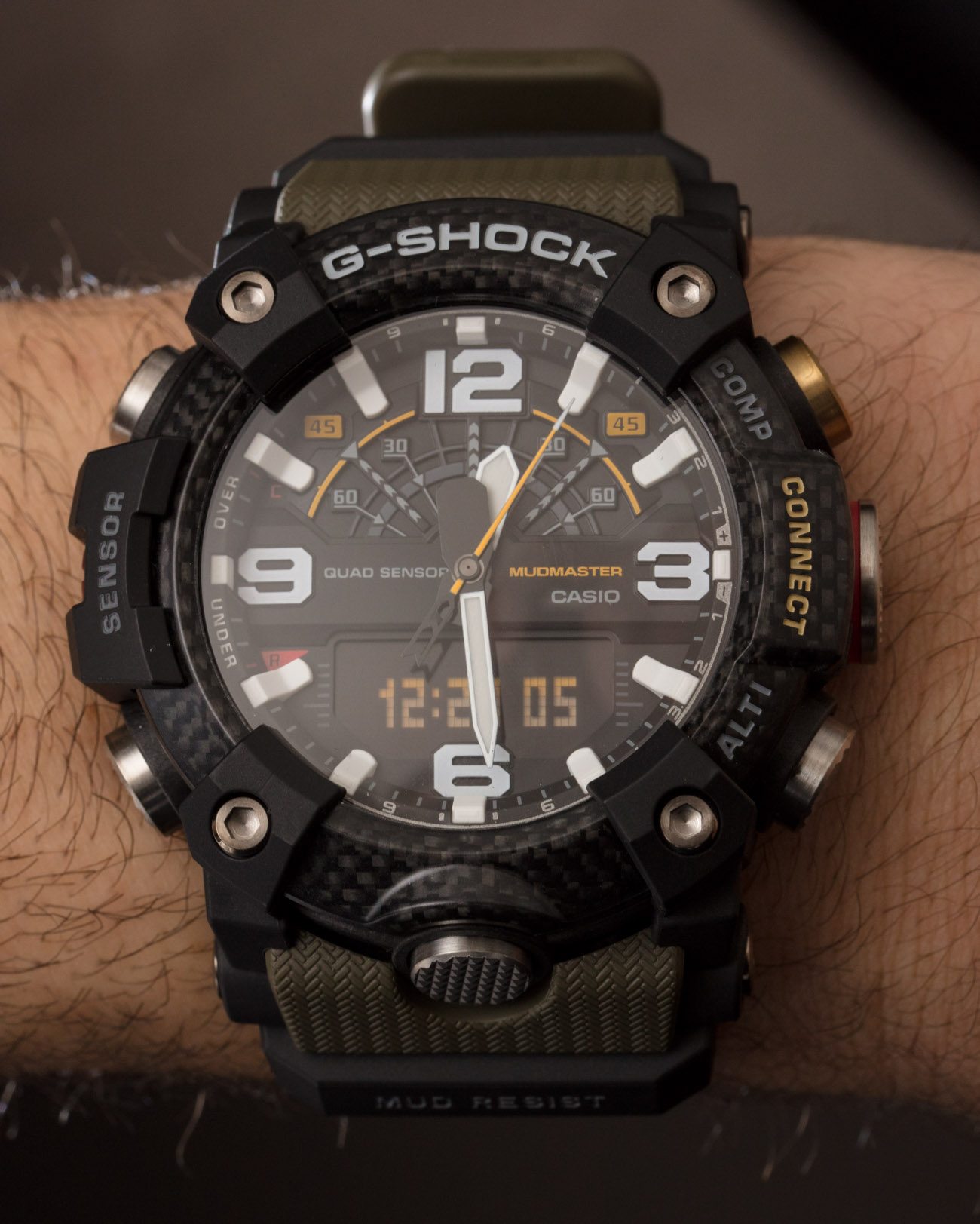 For Baselworld 2019, Casio really impressed us with a slew of very desirable new watches across a broad spectrum of price-points ranging from just a couple hundred dollars to over $7,000. One of the flagship fresh Casio watches for 2019 is very fairly priced: the new Mudmaster Collection model known as the Casio G-Shock Mudmaster GG-B100. (This specific version is the ref. GGB100-1A3.) The 2019 Mudmaster has looks, functionality, technology, and value on its side. Let’s check out why aBlogtoWatch feels that this new 2019 G-Shock will likely merit serious consumer attention.

The GG-B100 takes the Mudmaster in a few new directions while also introducing some key new technology for Casio. What isn’t new for Casio, but is new for the Mudmaster, is that the G-Shock GG-B100 is the first “connected” Mudmaster, which means it includes Bluetooth connectivity, allowing it to intelligently integrate with the G-Shock smartphone app. I’ve discussed this G-Shock app in other aBlogtoWatch articles but suffice it to say that it allows you to both control your watch from the app along with combine data from the watch and your phone together for new types of useful functionality. 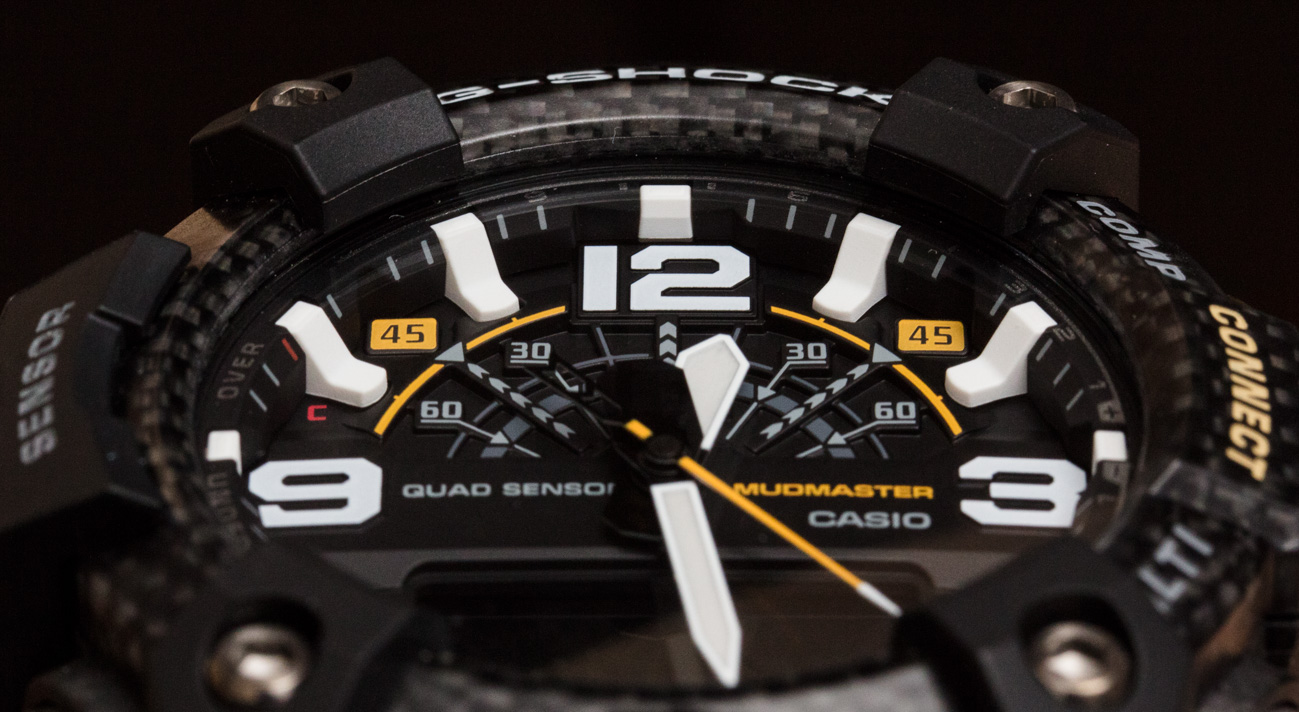 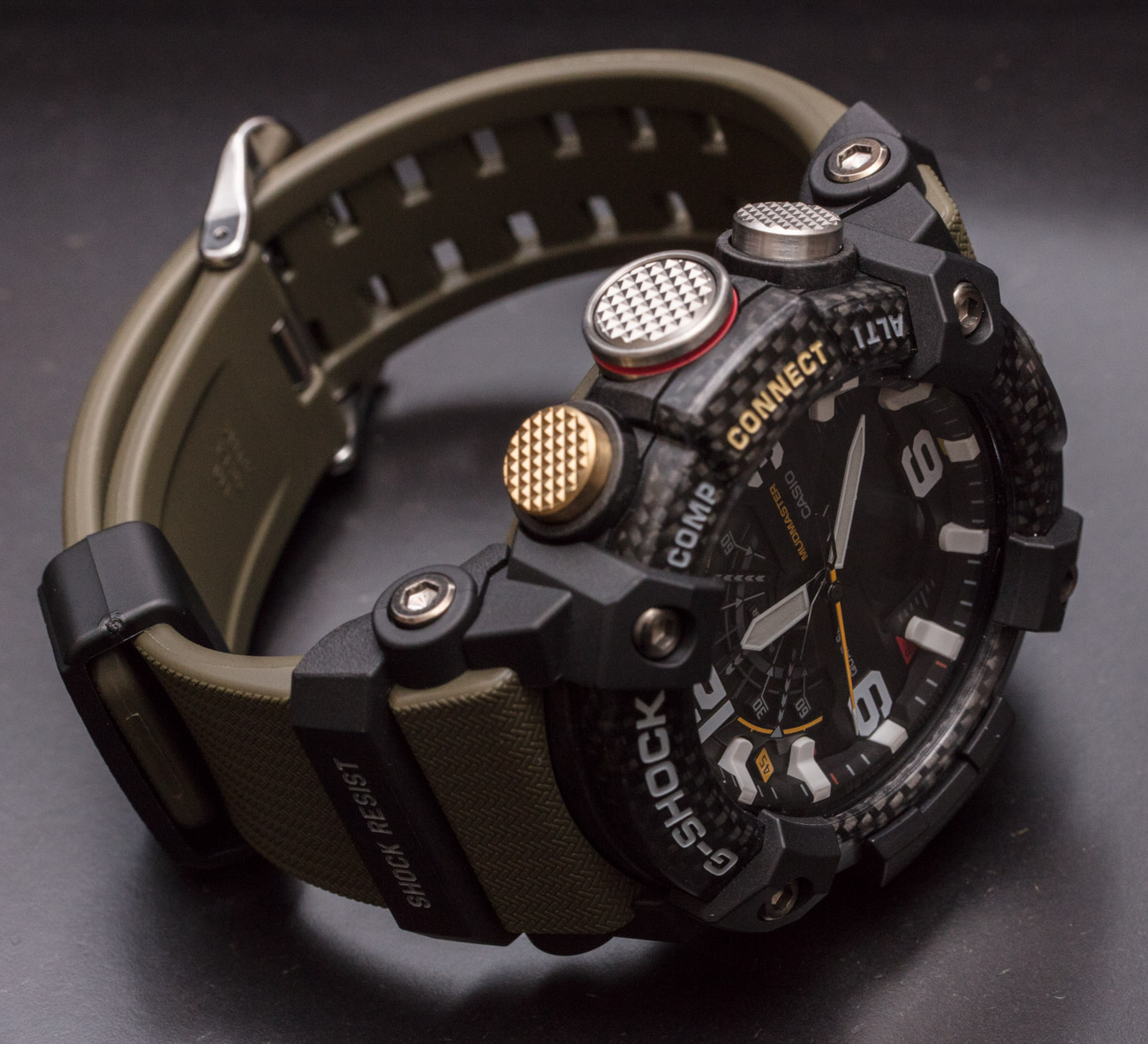 More specifically, this is the first “Quad Sensor” G-Shock watch from Casio that includes a step-counter. Triple Sensor watches have a compass, barometer/altimeter, and thermometer. The fourth sensor is an integrated step-counter (pedometer). While this technology is relatively simple, it hasn’t been included in a G-Shock watch before and helps the GG-B100 be that much more relevant for today’s consumers in an era where activity-tracking is so pervasive. The Mudmaster GG-B100 integrates with the G-Shock app, combining your phone’s GPS functionality with data collected by the watch for an interesting set of metrics, including useful information like the number of steps you’ve taken, along with the distance you’ve traveled. Casio specifically points out that the GG-B100 offers a mission altitude and position log function, a calorimeter (estimated calories burned), and location indicator as features attainable when the watch and phone app work together. Without having tested the functionality, I can’t speak too much to its real-world practicality but I am very much enthused that Casio continues to push the boundaries of what G-Shock owners can expect from their timepieces. 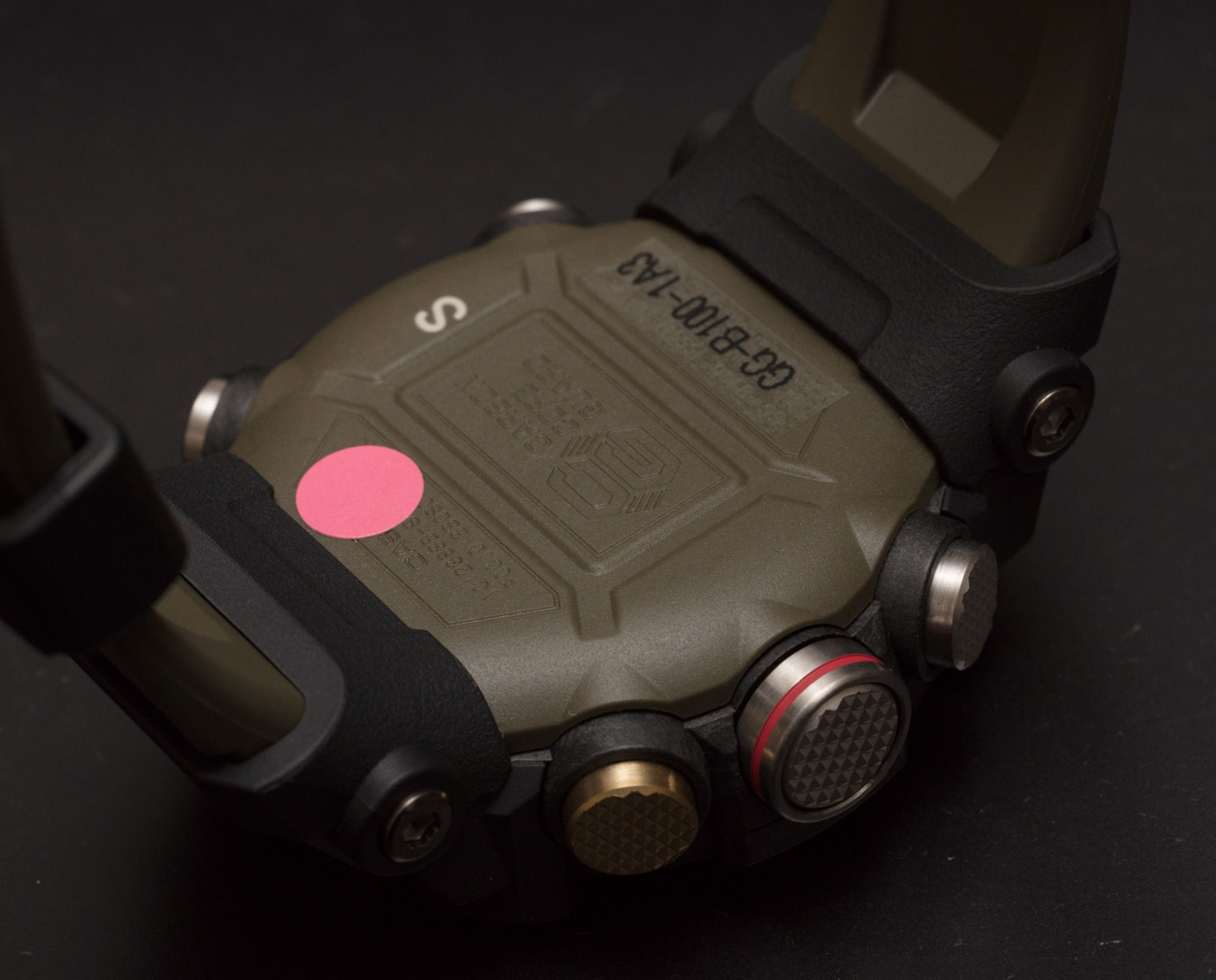 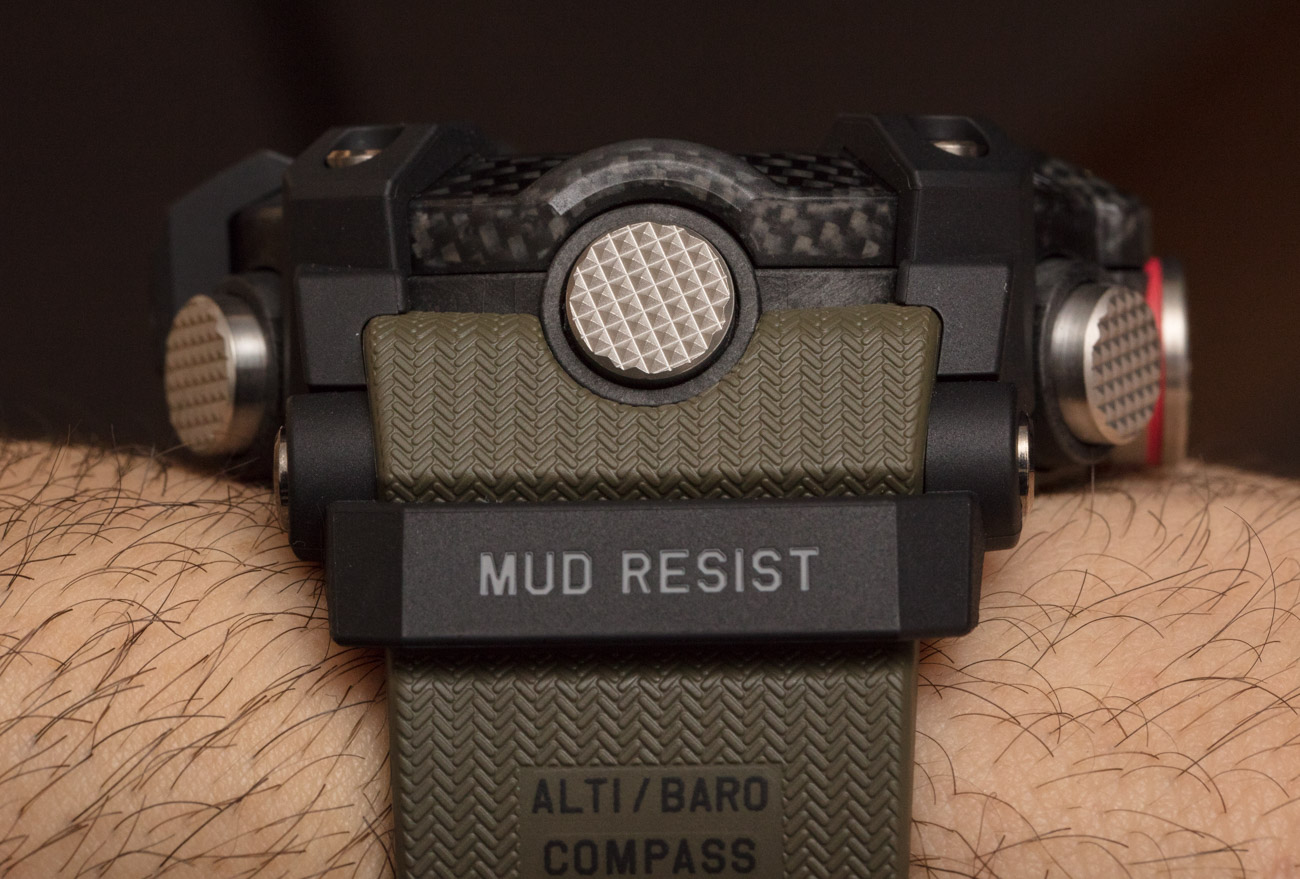 Using the combination analog/digital face, the module inside the new Mudmaster has a slew of both new and expected functionality, including everything from a sunrise/sunset indicator and five daily alarms, to a world time indicator and a chronograph. All that is missing for me in the movement is solar-power generation, which means that the user merely needs to change batteries every few years. Stylewise, the new Mudmaster GG-B100 face is one of the best ana-digi dials I’ve ever seen from Casio, combining a very legible set of analog hands and hour markers (fully lumed) with an attractive negative-tone (darker color) LCD display located near 6 o’clock. A few years ago, I was still skeptical as to Casio’s ability to really make its analog dials G-Shock watches — outside of traditional markets in Japan and nearby — success stories. Today they have proven me wrong, and I find myself mostly wearing analog dial G-Shock over fully digital-dial alternatives. Why? Simply because they look a bit more attractive and mature. An analog dial also gives these types of watches a more high-end look, to be honest. 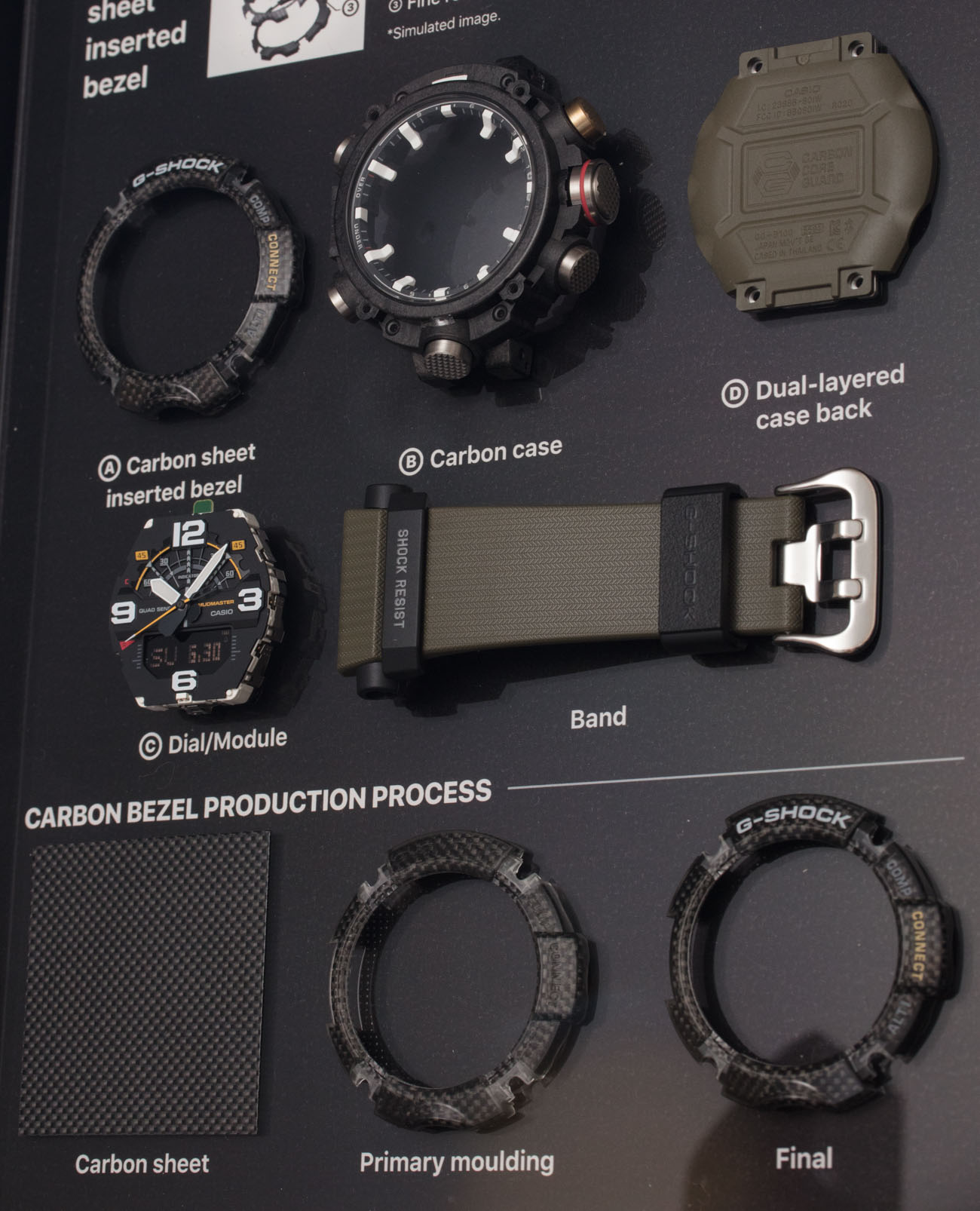 Perhaps some of the best technology in the G-Shock Mudmaster GG-B100 isn’t in the movement, but rather the case. Water resistant to 200 meters, the new Mudmaster is significantly lighter than the previous generation model. thanks to an entirely new case architecture that Casio refers to as “Carbon Core Guard.” Casio is now using more carbon fiber materials, as well as a new resin fiber class caseback construction. The new Mudmaster is more shock and debris-resistant than ever before, along with being lighter in weight. The watches also look more modern, and the older-style metal caseback feels like a vestige from the past when combined with the modern looks and materials of the rest of the timepiece. 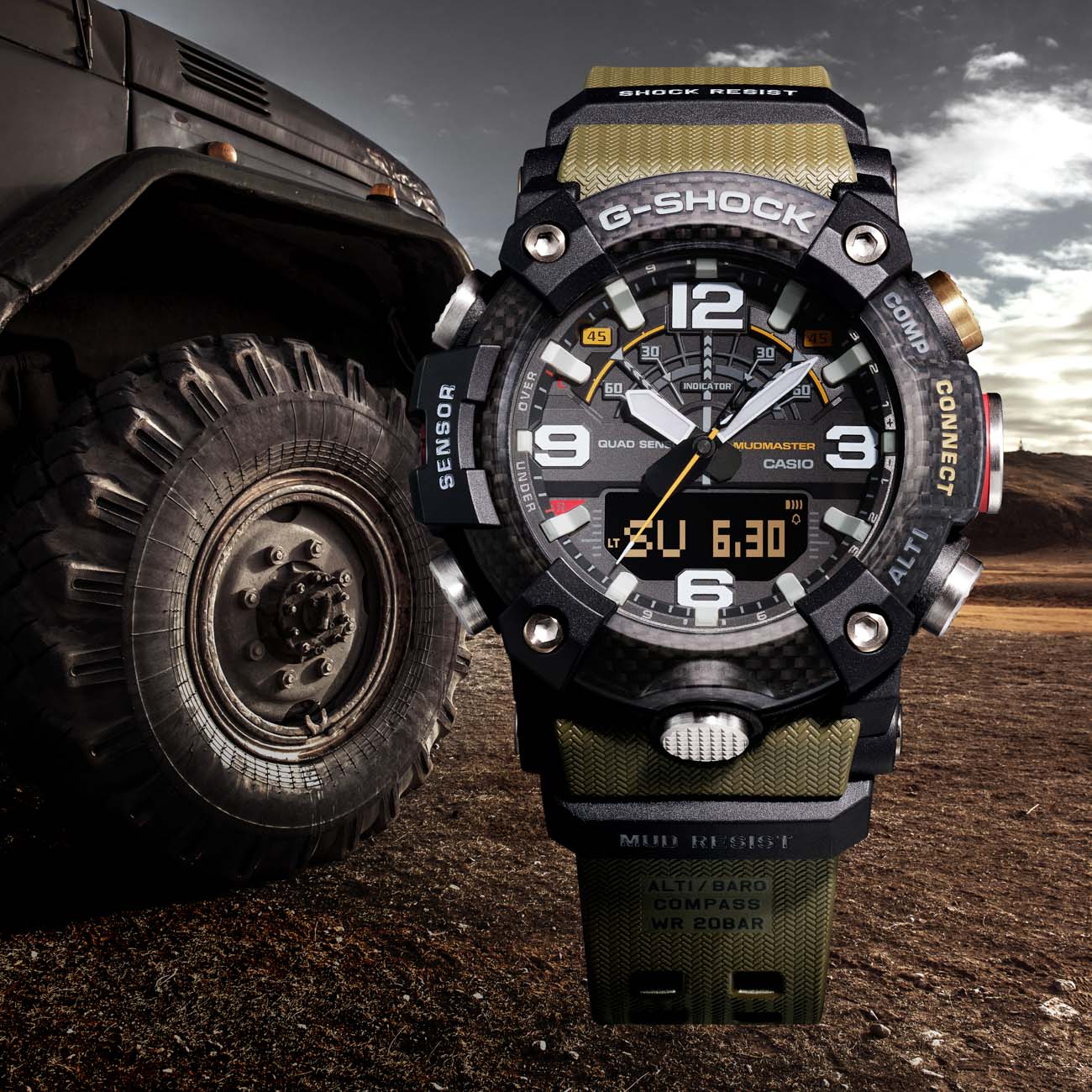 The Mudmaster GG-B100-1A3 bezel has the look of carbon fiber but is carbon fiber mixed with resin. Casio does, however, use entirely carbon fiber parts for some of its more expensive G-Shock models — and in the near future, the all-carbon fiber parts will likely find their way into models at this price-point. A new design for the pushers allowed Casio to remove some of the visual bulk, while promising incredible levels of mud, dirt, and dust resistance (not to mention water resistance). The pushers are also all-metal and have a really cool non-slip texture pattern on them. You can admire this pleasant-looking surface texture on the front-mounted pusher (which happens to activate the backlight). 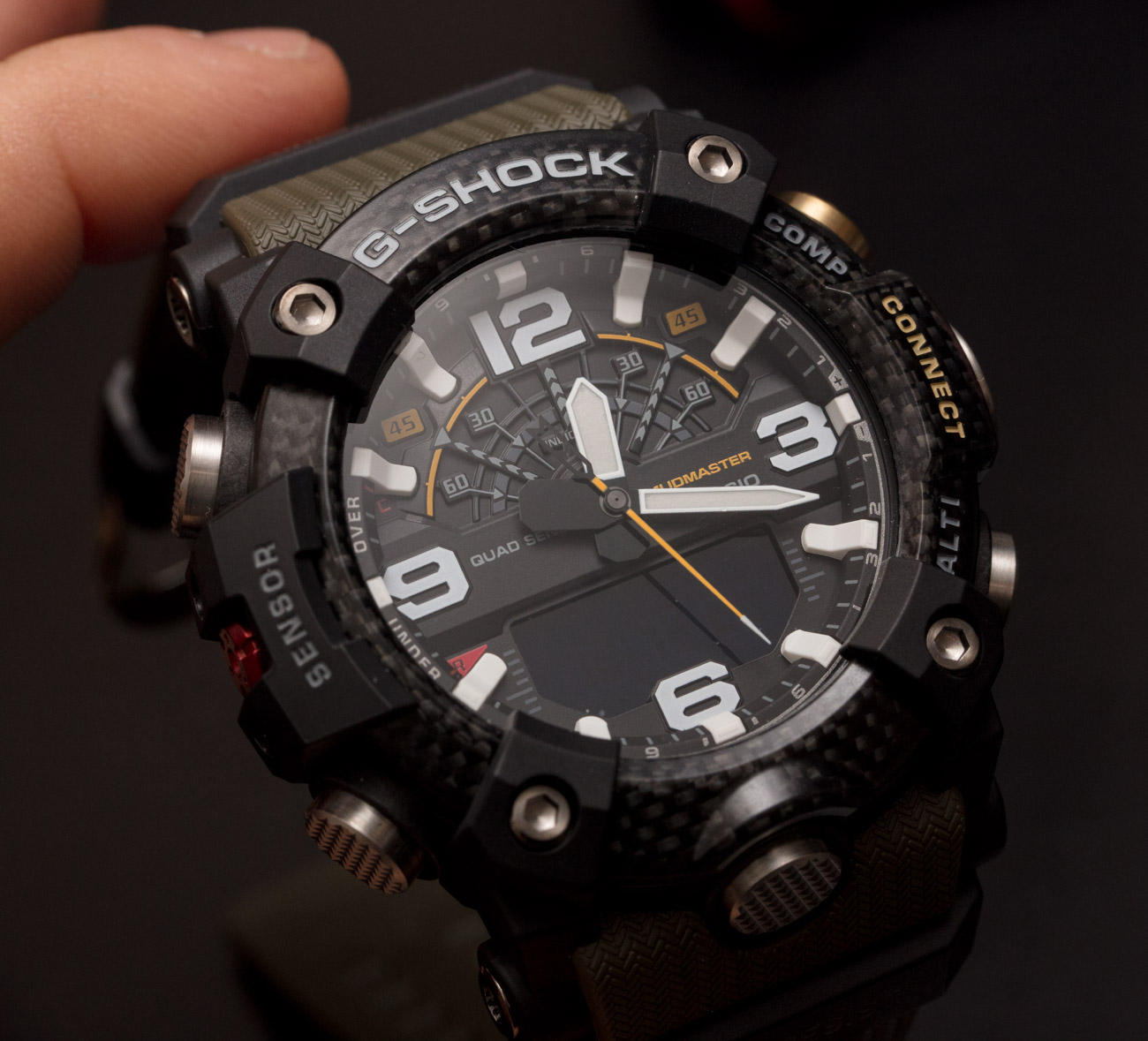 We fully expect to see additional Casio G-Shock watches with the new Quad Sensor system soon, and already for 2019, other Casio watches benefit from the new Carbon Core Guard case structure. Again, this not only allows for a more compact case construction that is still “G-Shock durable,” but it also allows for a lighter and more practical and comfortable wearing experience on the wrist. In classic Mudmaster khaki-green colors, the ref. GGB100-1A3 is the standard version of the new Mudmaster GG-B100, and more color versions will likely come soon. Destined to be a popular seller for Casio in 2019, the G-Shock GG-B100 ref. GGB1000-1A3 has a retail price of $350 USD. Learn more at the Casio website here.