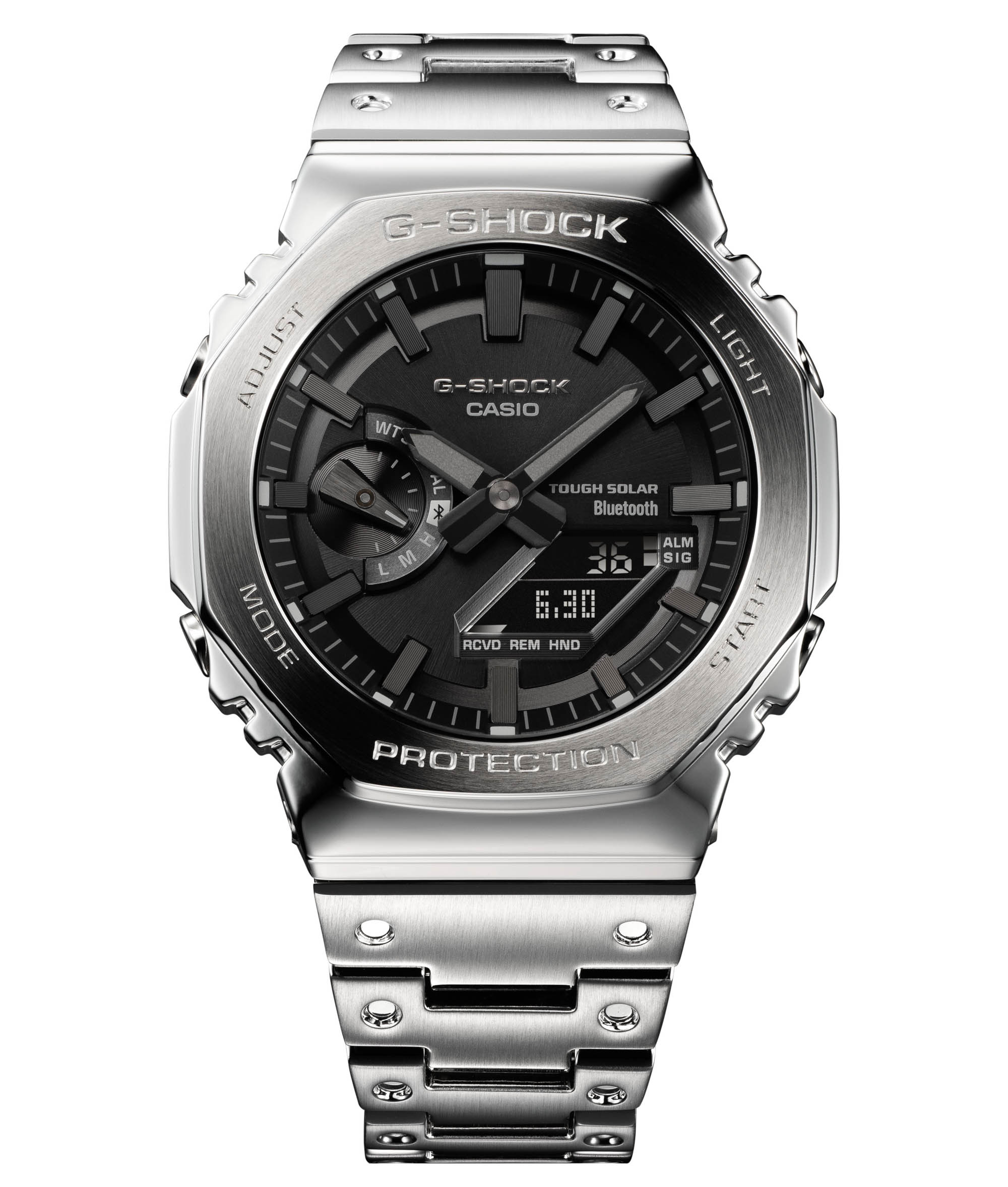 There have been a number of popular G-Shock case silhouettes produced by Casio over the years, but the octagonal GA2100 series that first debuted in 2019 truly took the watch enthusiast world by storm. According to Casio, the actual design inspiration comes from combining two famous G-Shock cases from the brand’s archives. However, the octagon-shaped model’s widespread success was at least partially due to its slight resemblance to the Audemars Piguet Royal Oak, and this is confirmed by its ubiquitous “Casioak” nickname within collecting circles. The new case design itself arrived right at the peak of Royal Oak madness, and it quickly became the must-have affordable item from the world of horology, with countless collectors all picking up their favorite color. 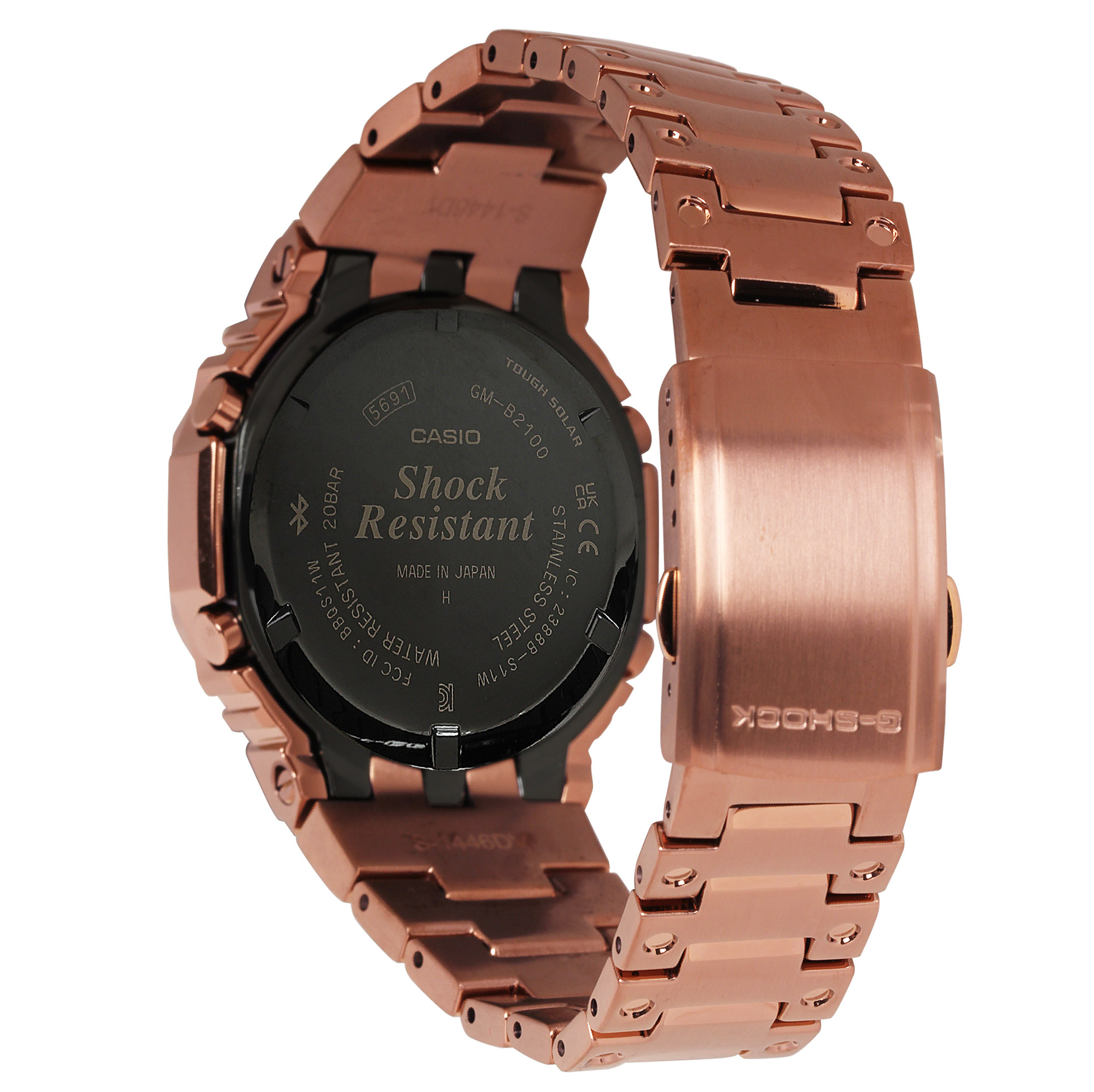 In the time since this octagonal G-Shock case first made an appearance, Casio has expanded the lineup to include a shocking range of different colors and configurations, along with a handful of collaborations and even an advanced range of models that adds solar charging and bluetooth connectivity. The most recent addition to this fan-favorite octagonal case silhouette is the GMB2100 series, which makes its debut in three different colors and takes things one step further by adding finely finished metal cases and bracelets to create the thinnest model yet in G-Shock’s full-metal collection of watches. 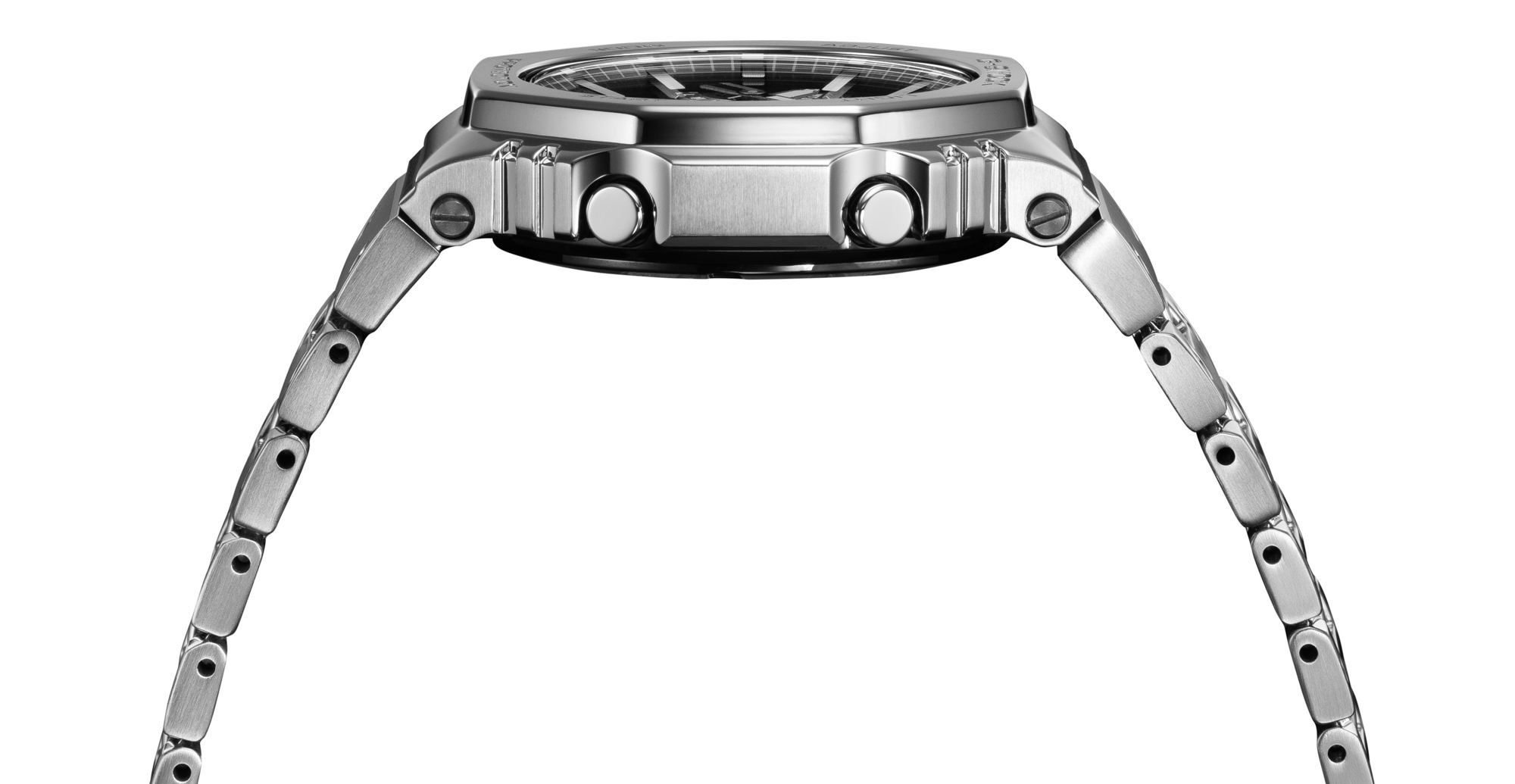 Beyond the octagonal shape of the case itself, the original GA2100 series won big points with collectors for having a thinner profile than most other G-Shock models. The new full-metal G-Shock GMB2100 series continues that trend and measures 44.4mm-wide by 49.8mm lug-to-lug and comes in at just 12.8 mm-thick, which makes it the thinnest full-metal G-Shock by approximately 0.2mm. The case, bezel, and bracelet are all crafted from stainless steel, and the middle case features a screw-back design with fine resin between the bezel and metal inner case for added shock absorption. 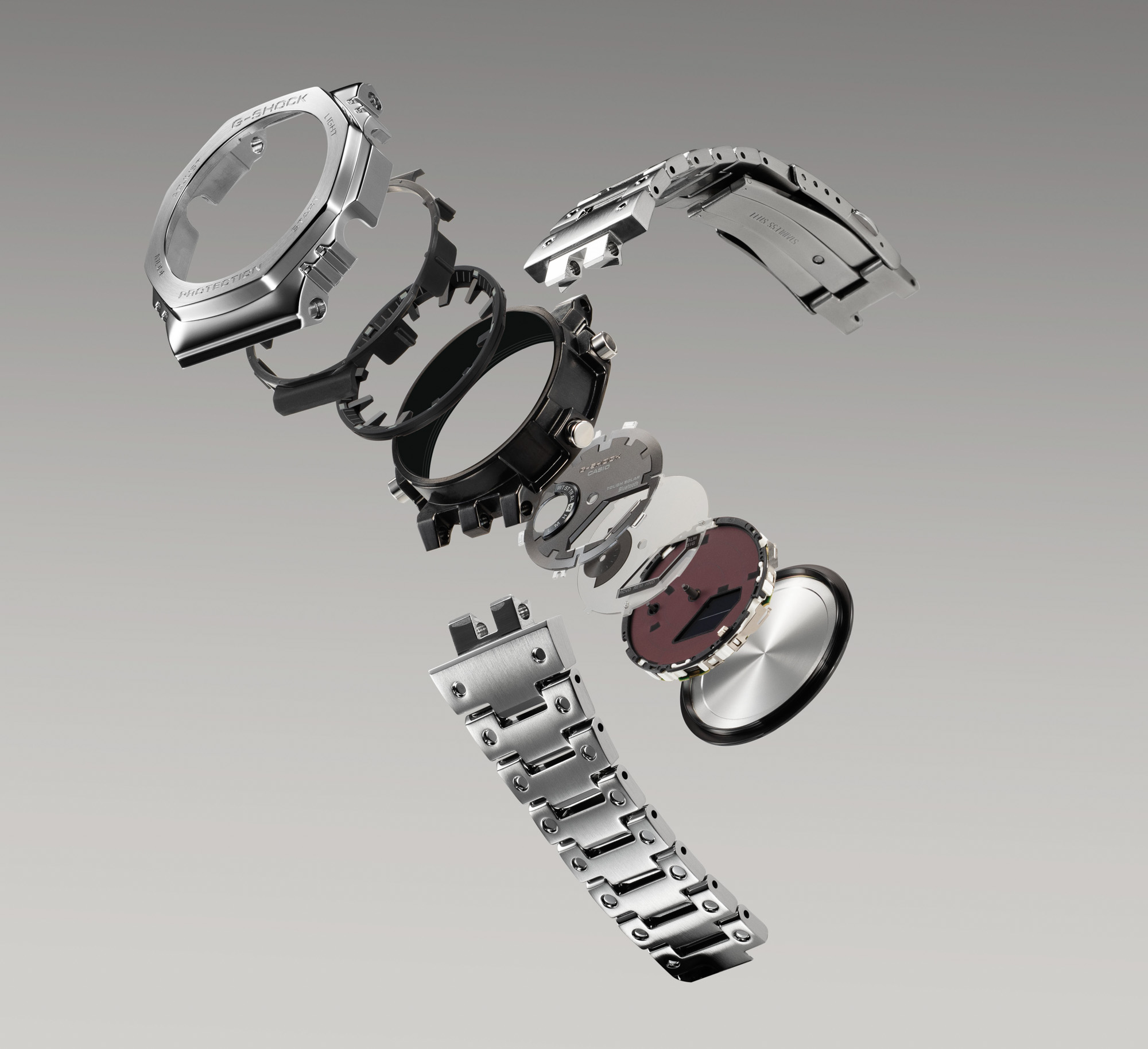 Just like all Casio G-Shock watches, durability and resilience are always top priorities, although the new GMB2100 series also features intricately finished three-dimensional bezels that require a three-step surface finishing technique to provide them with their circular hair-line finish on the top, vertical brushing finish on the side surfaces, and high-polished appearance on the main parts of the bezel. Additionally, similar to the other models from the brand’s greater 2100 series of watches, a flat mineral glass crystal protects the dial, while four buttons positioned on the sides of the case offer access to the internal module and its various features. 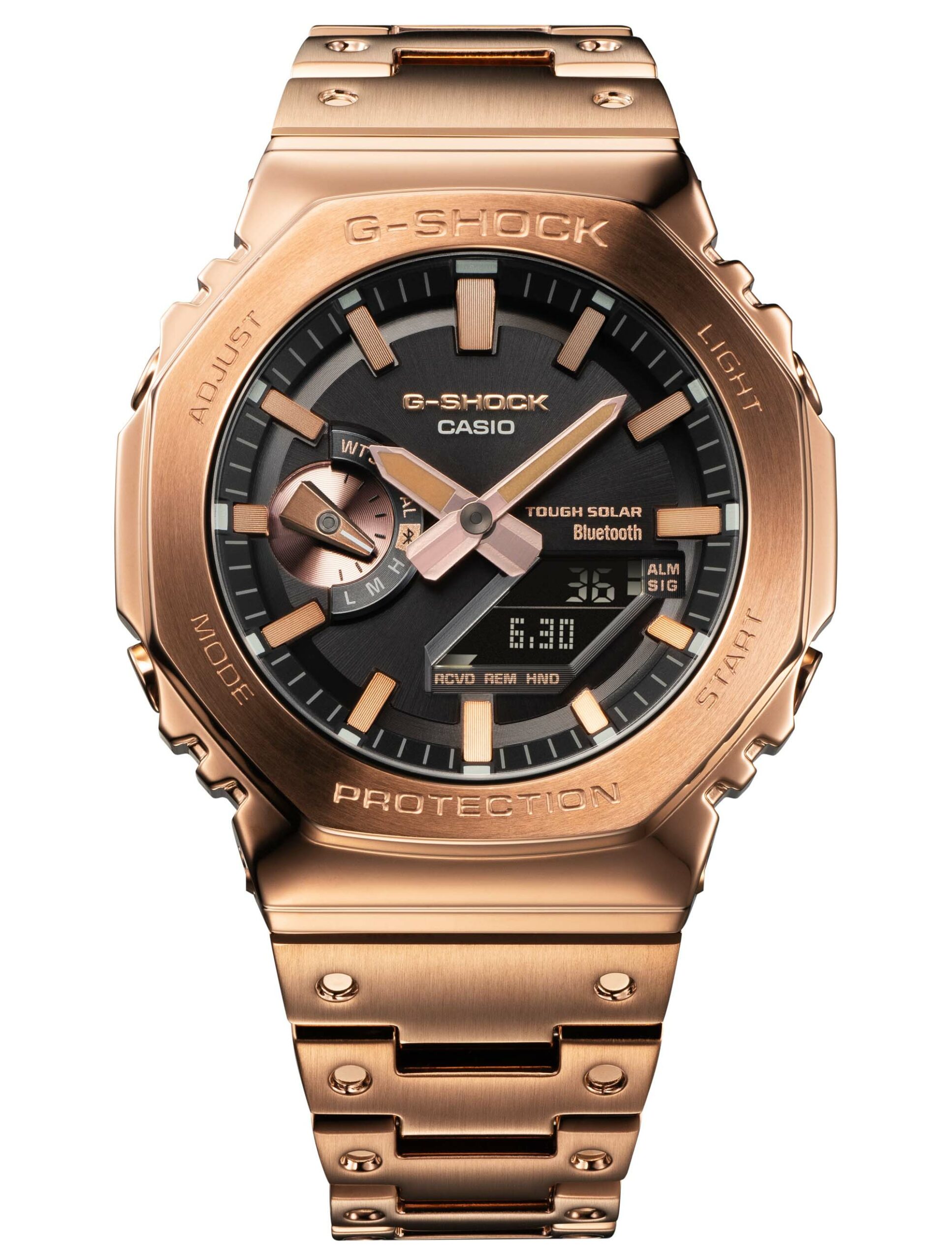 At the time of launch, the full-metal G-Shock GMB2100 series is offered in three different colorways. The GMB2100D-1A features a natural silver finish across the entirety of its stainless steel surfaces, while the GMB2100BD-1A offers dark gray ion-plating, and the GMB2100GD-5A features copper-colored ion-plated surfaces. The colorways of each watch extend to their dials, which include hour markers and accents finished with a vapor deposition treatment for a matching and harmonious overall finish. The dial layout remains identical to other models from the G-Shock 2100 series, and it includes a pair of centrally-mounted hands for the hours and minutes, along with an analog function-selector display at the 9 o’clock location and a small LCD screen on the lower half of the dial that grants access to the watch’s various digital features. 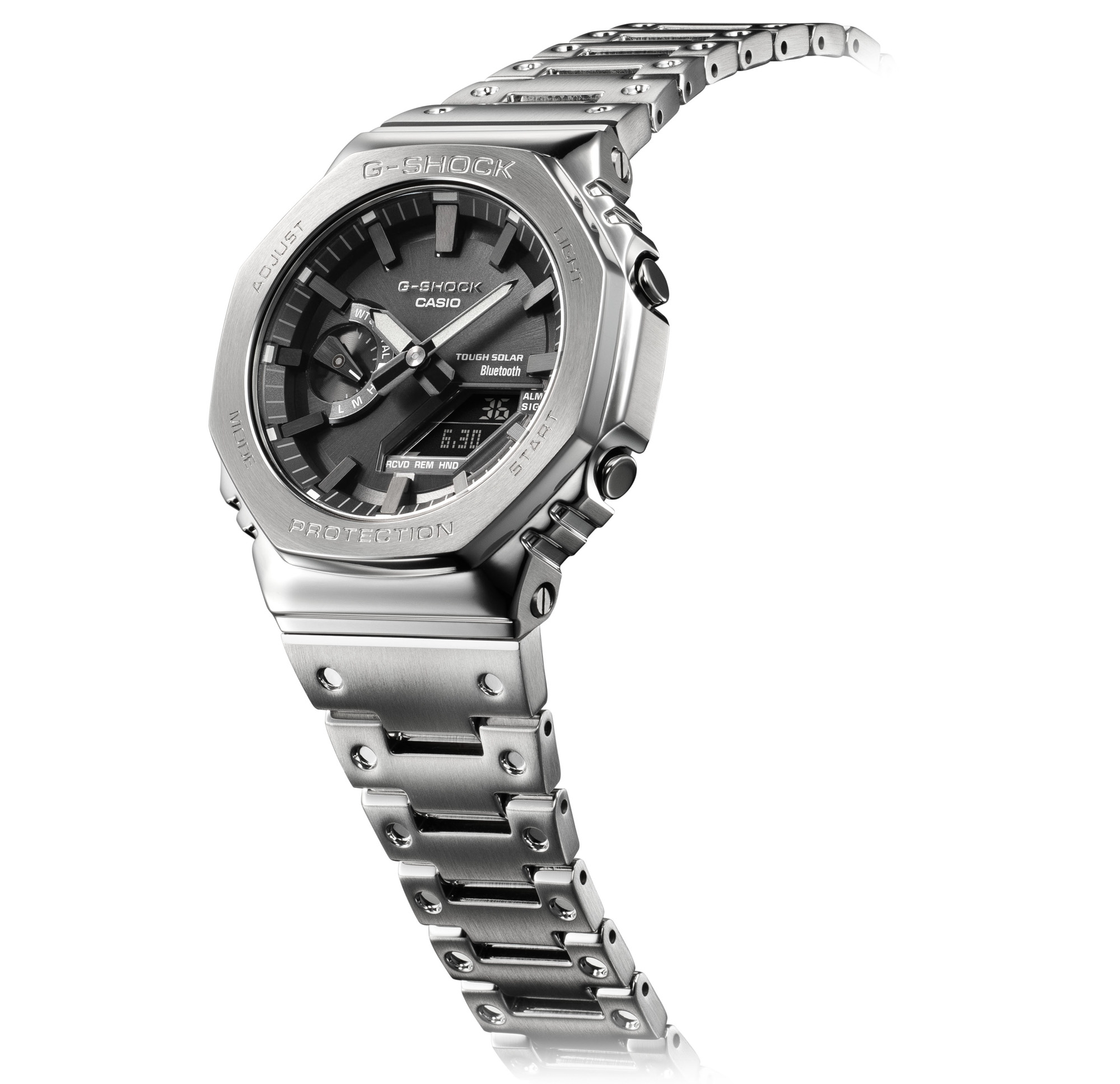 Powering the new full-metal Casio G-Shock watches is Module No. 5691, which offers all of the usual multi-function digital features that you would expect to find on one of the brand’s models, such as a stopwatch, alarm, countdown timer, world time feature, automatically programmed calendar, and backlight. Additionally, as the full-metal G-Shock GMB2100 series is positioned as a more premium option within the brand’s lineup, it also offers solar charging made possible by a highly resilient film-like solar panel, along with Bluetooth connectivity to enable a variety of built-in practical Smartphone functions via the Casio G-Shock Connected app. 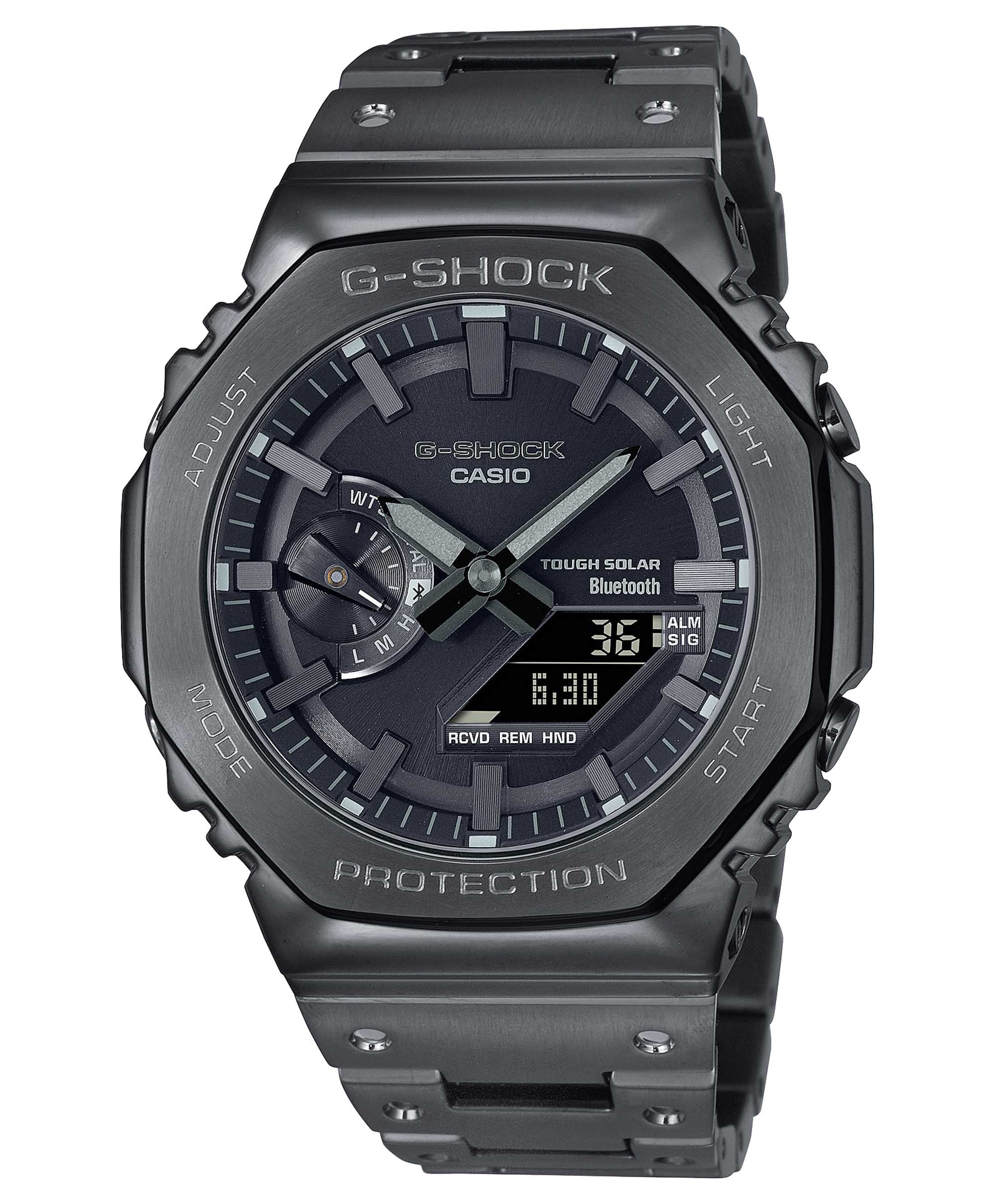 Staying true to their “full-metal” designation, the trio of new G-Shock GMB2100 watches feature solid-link stainless steel bracelets fitted with push-button release folding clasps. The bracelets themselves connect to the stainless steel inner cases with a three-pronged structure at the lugs to better disperse shocks to the connective part of the band. Additionally, all of the bracelets feature a distinct dimpled design that is highly reminiscent of the rubber straps traditionally fitted to G-Shock watches, and the metal surfaces of the links themselves include colored ion-plating to match the colorways of their respective watches. 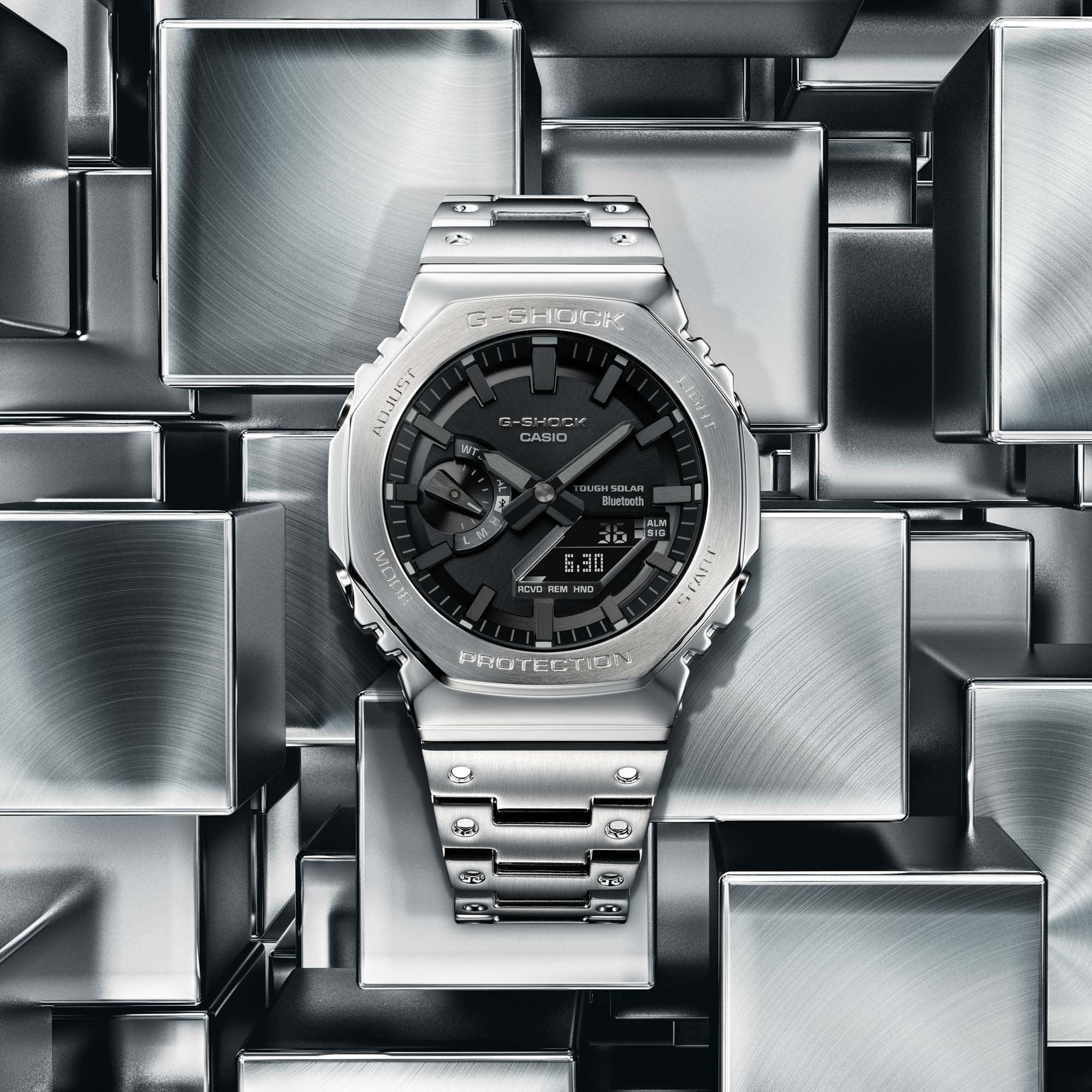 One of the reasons people loved the original GA2100 series is because it offered a bottom-dollar way for collectors to get their hands on a watch with a distinct octagonal profile, and these new full-metal G-Shock GMB2100 series watches are likely the very thing that a lot of enthusiasts have been waiting for since this ultra-popular case silhouette first made an appearance a few years ago. Available for purchase starting August 2022, and accompanied by an official retail price of $550 USD for the silver GMB2100D-1A or $600 USD for either of the GMB2100BD-1A or GMB2100GD-5A watches with colored ion-plated finishes, these new full-metal Casio G-Shock models represent a noticeable step up in price compared to their resin-cased siblings, while still managing to remain firmly within the affordable side of the greater G-Shock lineup. For more information, please visit the brand’s website.