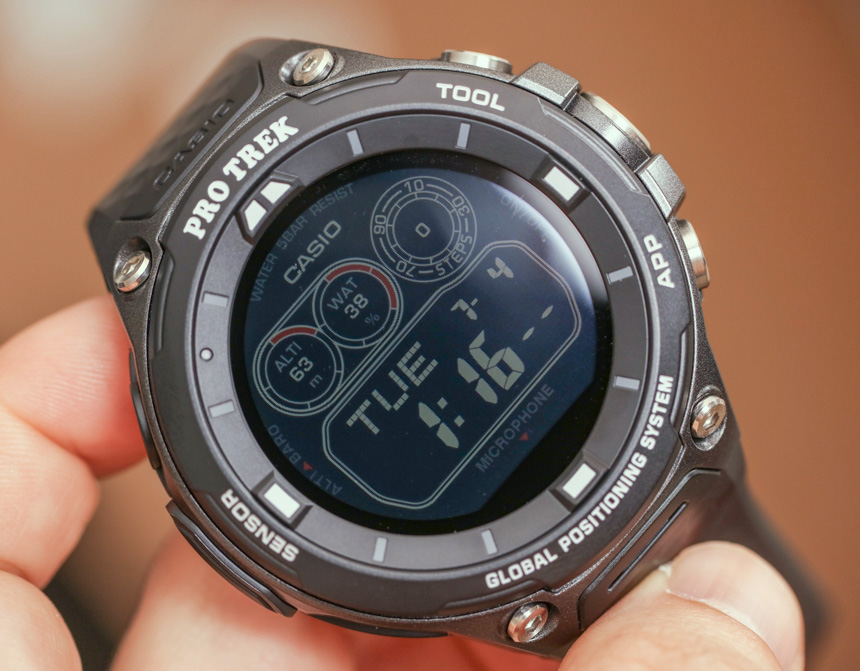 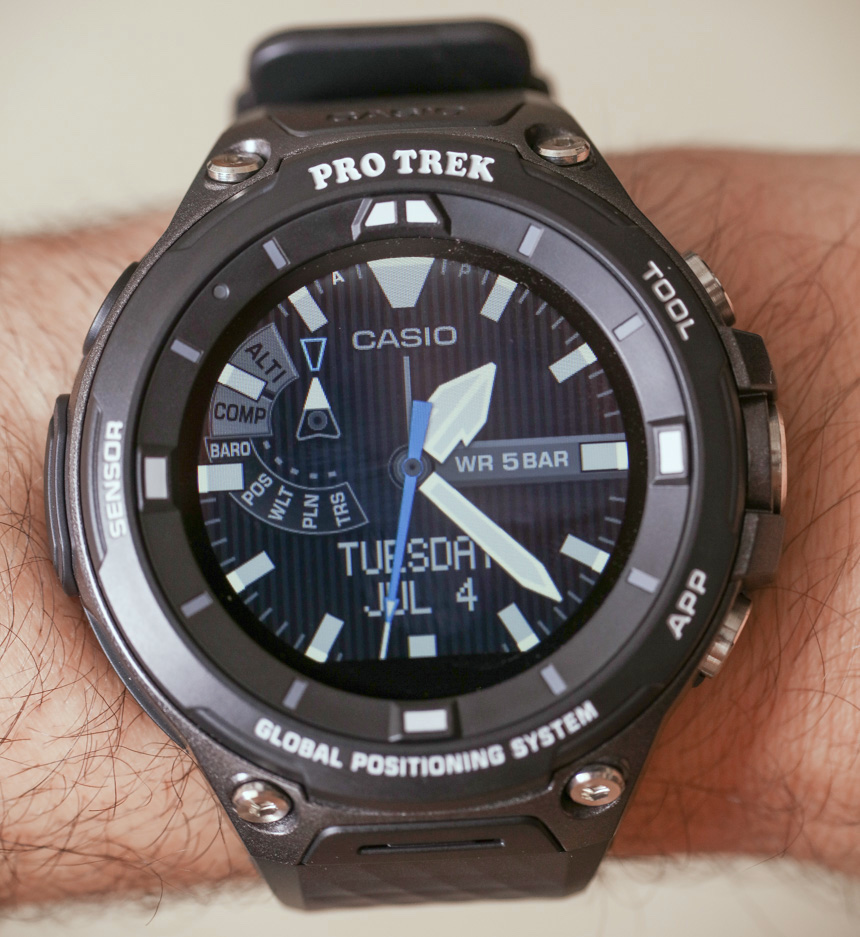 Casio calls their second generation smartwatch the “smart outdoor watch” – a fitting title for the very decent Casio Pro Trek Smart WSD-F20 that we see here. While Casio is the only of the three major Japanese watchmakers to embrace modern smartwatches, the segment of “intelligent connected timepieces” was arguably invented if not dramatically improved by companies such as Casio since the 1980s. Now in 2017, a smartwatch is by today’s definition, quite radically different from what the Japanese more or less invented over the last 30 years.

Modern smartwatches (at their best) are a merger between reliable, functional hardware and robust sophisticated software. While sometimes the same company produces both (e.g. Apple), most of the time in the context of smartwatches, the hardware and software are produced by different companies. This is very distinct from more traditional watches where the same company developed or at least had control of both the outside and “inside” of the watch. I always tend to keep this in mind when reviewing smartwatches, since it does change the way they are evaluated, given that there is both a hardware and software component to the review. In this case, the WSD-F20 runs Google Android Wear 2.0, with some exclusive software developed for Casio, inside of a piece of hardware produced by Casio. Thus, the operating system in many ways is a separate element, which merits it own review discussion that will be better explained elsewhere. This review is best for people who already have an understanding of what Android Wear 2.0 is and how to use it. 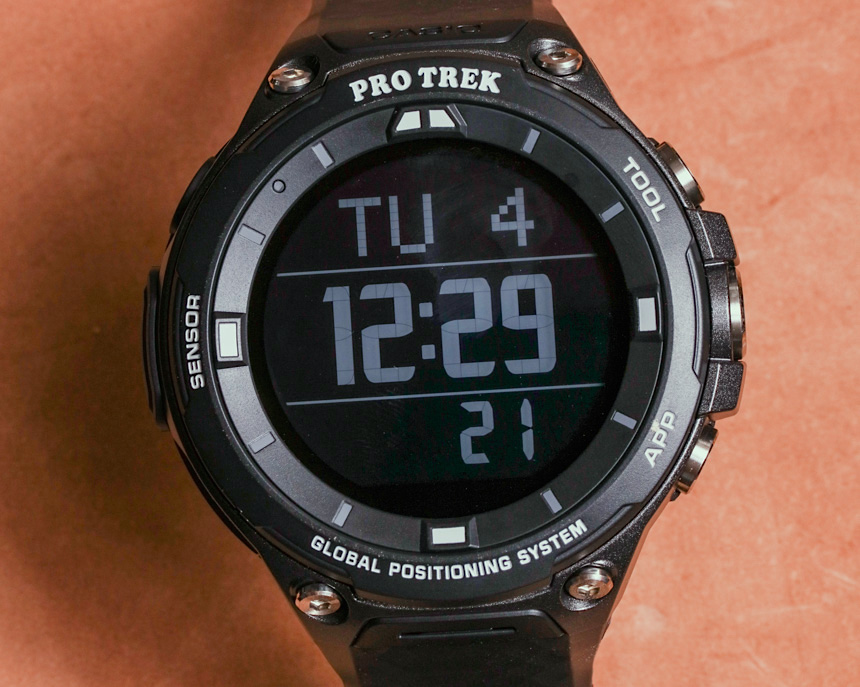 Smartwatch development is going in a predictable direction as far as I am concerned and timepieces like the Pro Trek Smart in some ways are transitional items of technology, but in other ways serve as excellent niche-appeal products which demonstrate that not all Android Wear 2.0 watches need to look and perform the same. Casio isn’t trying to reinvent the smartwatch segment, or outperform the competition on all levels. Rather, Casio hopes that the Pro Trek Smart WSD-F20 will be the smartwatch of choice for those who want better than average durability and features designed especially for hiking and outdoor exploration – plus a connection to their smartphone and the Internet. 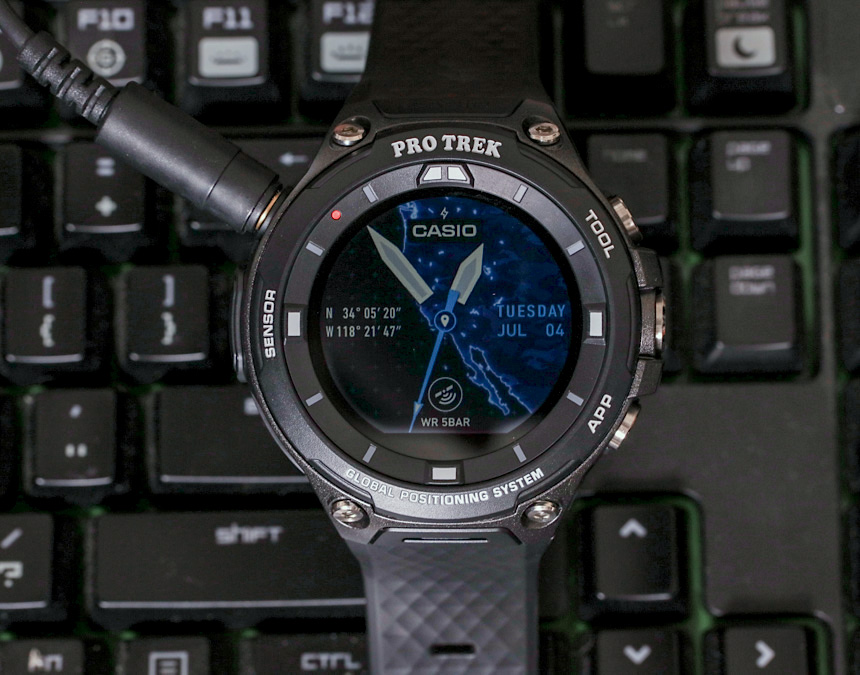 I first introduced the Casio Pro Trek Smart WSD-F20 here, which is a good place to go if you want to learn more about the product’s history and overall position compared to some of the competition out there. Note as well that the WSD-F20 is a follow-up product to Casio’s original smartwatch, which was the WSD-F10 (aBlogtoWatch review here) from the previous year. In many ways, the watches are similar – with a custom software layer for the “tools,” the watch case’s overall shape and size, as well as the overall wearing experience. Then again, the updates in the WSD-F20 over the WSD-F10 are probably compelling enough to merit an upgrade and offer new reasons to buy for those who were not persuaded by the WSD-F10. 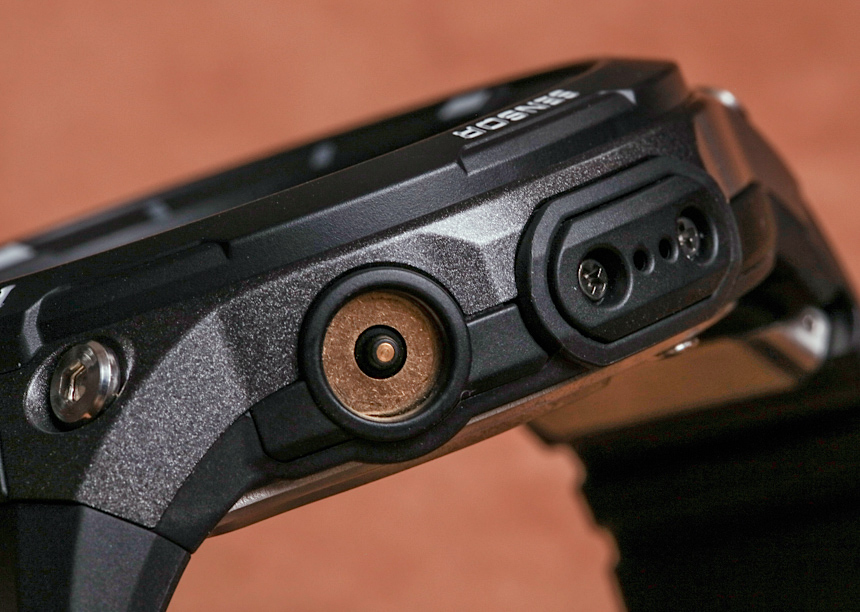 New to the WSD-F20 from a marketing standpoint is the collection’s inclusion to the larger Pro Trek family of Casio watches. Long known for being a “hiker’s best friend,” the Pro Trek family of timepieces is the more outdoorsy cousin of the G-Shock. In reality, these two product worlds have come close to overlapping in many instances, and I think Casio is once again trying to make Pro Trek “its own thing.” By including the WSD-F20 smartwatch in the Pro Trek family, the first thing Casio has acknowledged in the durability of the collection. The upgrade to 50m of water resistance over 30m is a big part of that. 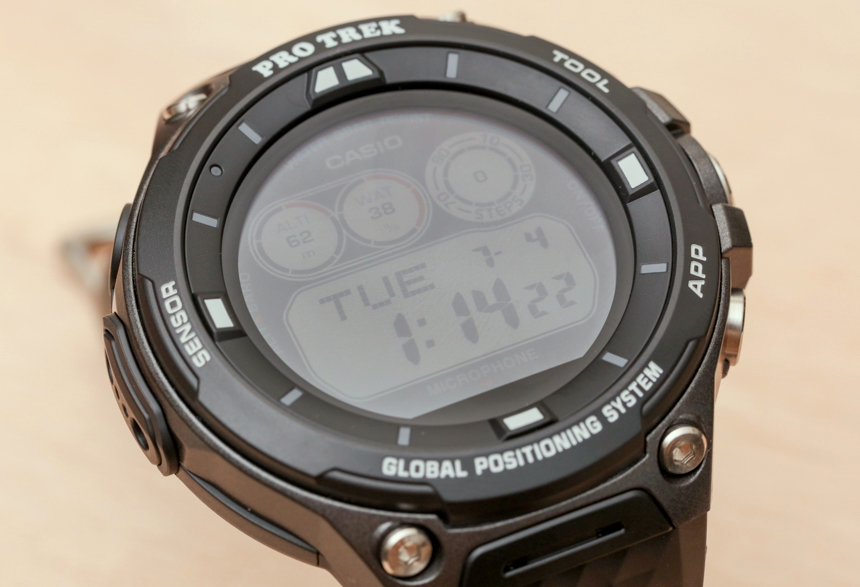 In order to make the WSD-F20 feel more like a Pro Trek watch, Casio redesigned the front bezel, which I actually agree is a bit more attractive as compared to the much more simple case of the original WSD-F10. Maintained is the watch’s assortment of included sensors such as a compass and barometer/altimeter module and the added GPS module. This not only puts the Casio WSD-F20 more in line with other competitive smartwatches, but helps the watch be that actual exploration watch a Pro Trek really needs to be. 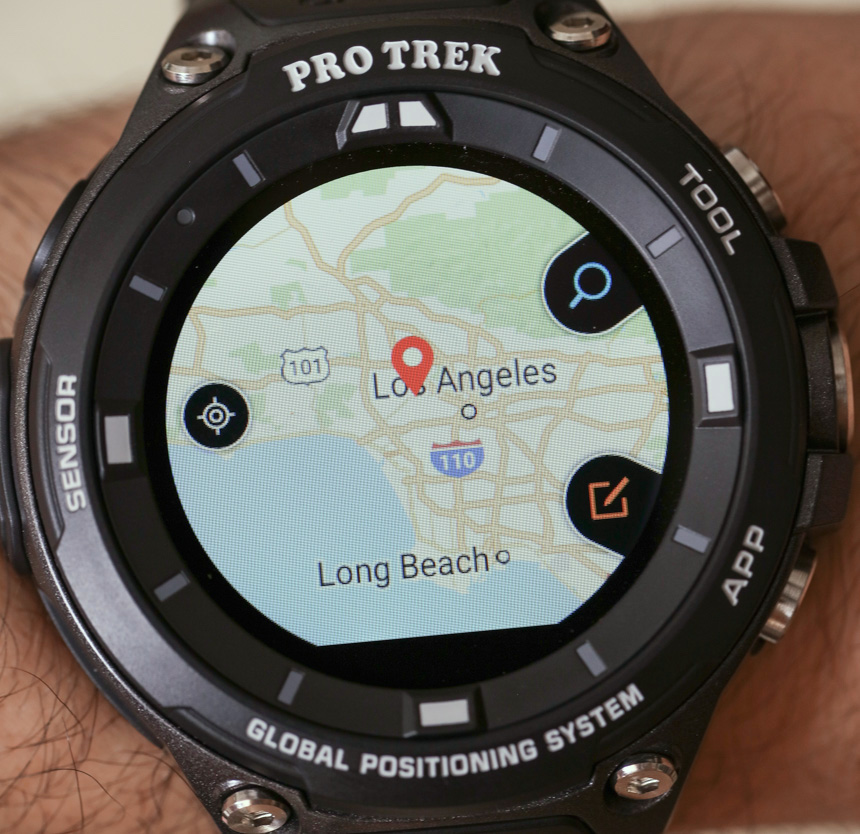 Casio offers some nice features to help keep the WSD-F20 relevant where mobile phone signals can’t go. GPS isn’t that useful without being able to show you where you are, so the watch allows you to download (the watch has 4GB of internal storage as well as 512Mb of RAM) area maps for use on the watch when you don’t have any internet signal. I didn’t use this function, but I did use the overall maps feature (when connected) as part of Android Wear 2.0 on the watch, and it worked wonderfully. The Pro Trek Smart is finally the robust modern hiking gadget that fans of the range have waited over a decade for. 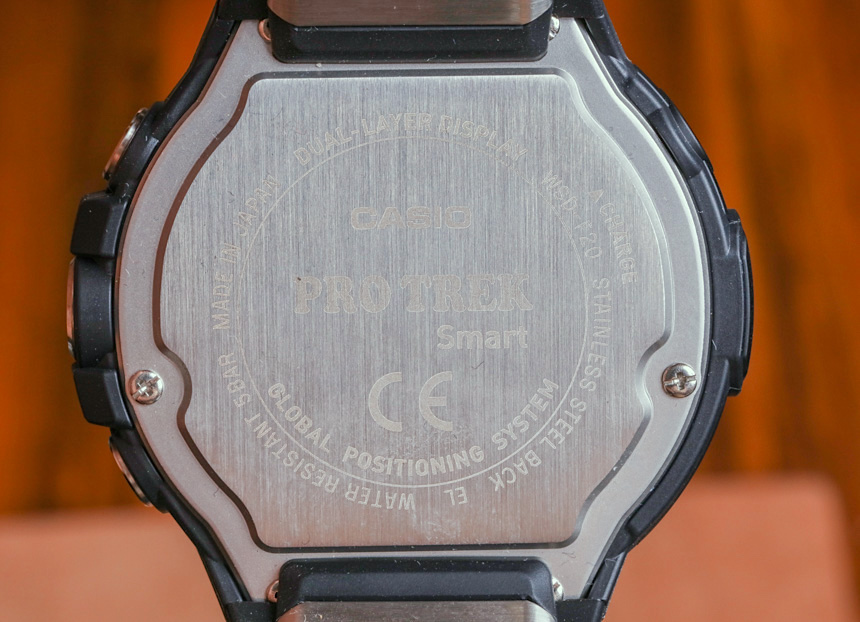 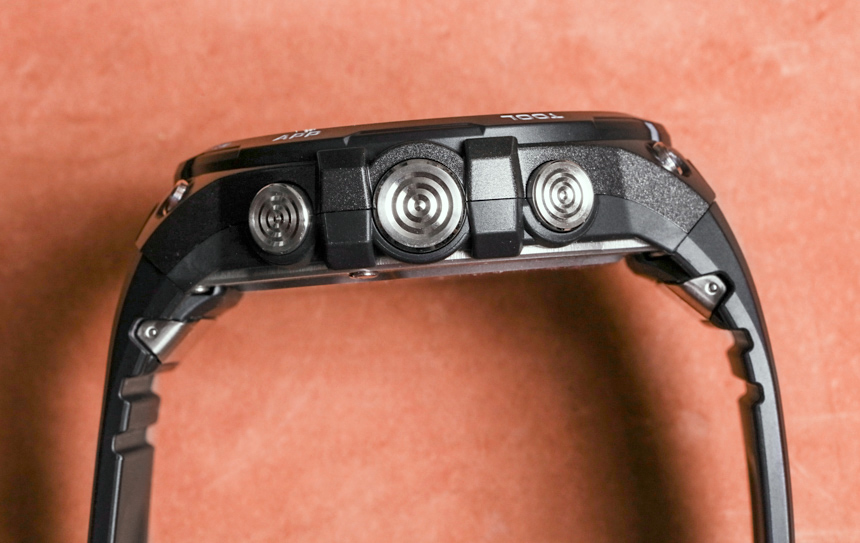 Given that the smartwatch market evolves so quickly, it is difficult to anticipate what products may come next as potential competitors to what Casio is doing with its Pro Trek Smart, namely the WSD-F20. Hikers and outdoor enthusiasts will likely try to compare products like the Casio WSD-F20 with other smartwatches meant to be taken outdoors from companies such as Apple, Suunto, and Garmin (among a few others). The same weakness applies to all of them, and that is battery life. No matter how useful these devices are (with or without a mobile internet connection) they still only have about 1-2 days of battery life. Less if you are constantly using features such as GPS, the maps, and even the compass or other tools. 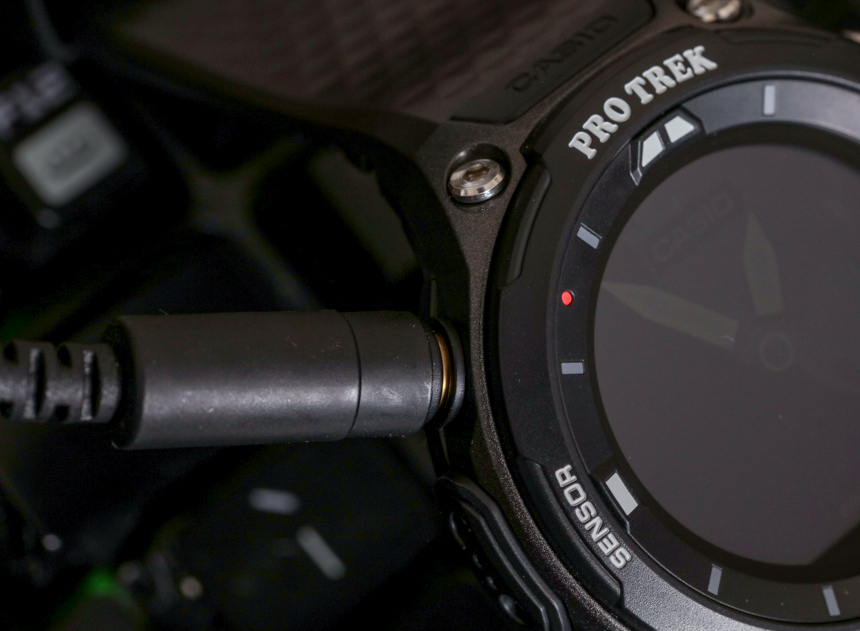 Yes, you can recharge them in the field, but this isn’t always an easy task. Perhaps my biggest complaint with the WSD-F20 (and the model before it) is that Casio seems to have neglected the fact that people might want to charge these devices somewhere other than a stable surface. The WSD-F20 charges fast enough (no smartwatch battery is particularly large), but in order to charge it you still need to rely on a relatively flimsy magnetic cable. This system simply doesn’t work very well if you want to take your watch off for a bit and say, charge it via an external battery (as many people carry these days) in your backpack or bag. Yes, the charging cable will work, but without a way of more securely attaching the cable to the watch – unless you get creative with rubber bands and tape – the movement of simply walking around will disconnect the watch from the charger. 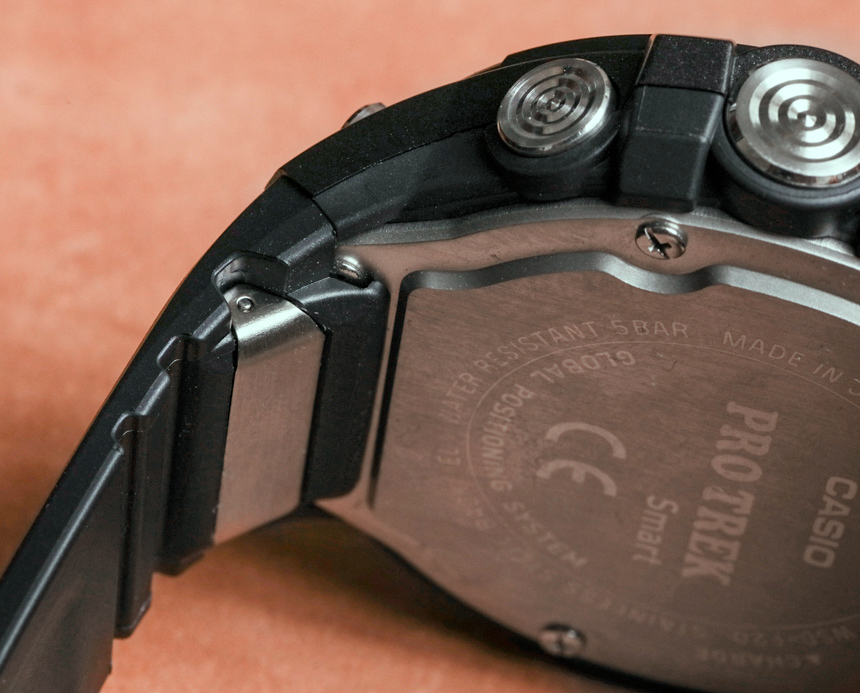 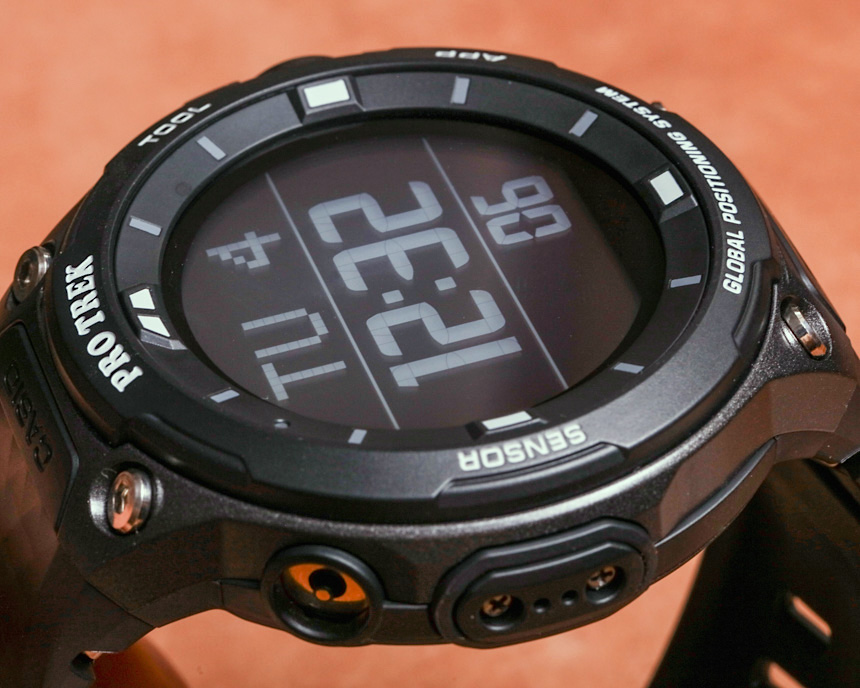 To be fair to Casio, most smartwatches are not designed to be charged while on the go – but that seems like a big mistake in my opinion. Casio would gain a lot of points by offering at the very least a clip-on charger so that your watch can charge while in a bag or even while on your wrist. Casio might also invest in an outdoor external battery with similar durability as the WSD-F20 that can charge the watch as well as other devices. I know for sure that I would trust a “G-Shock Battery” for my devices if Casio were to make one. Just the idea of it makes me want to buy one (given all the crappy external batteries I’ve had that inextricably become damaged while travelling – no explosions, yet).