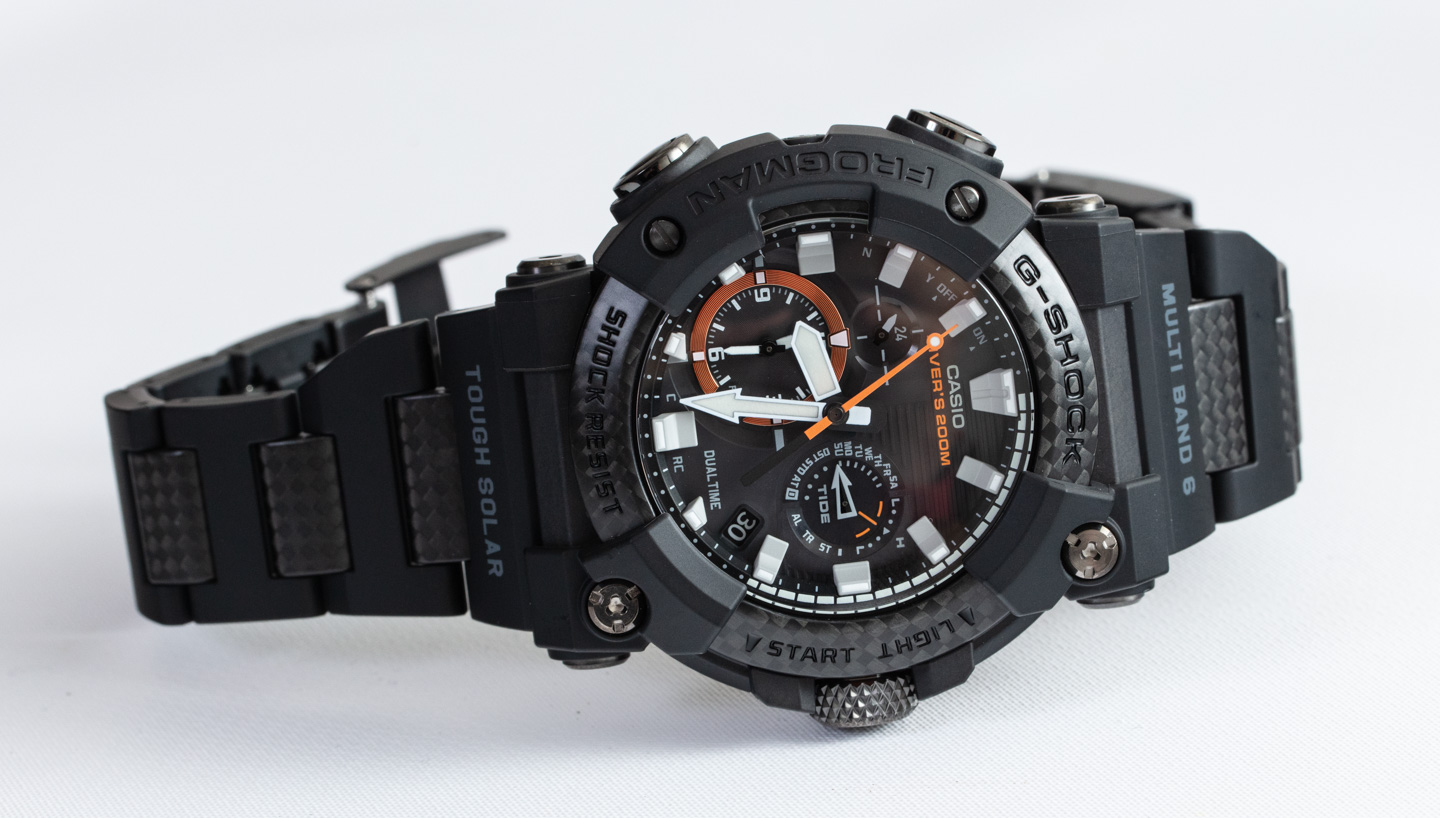 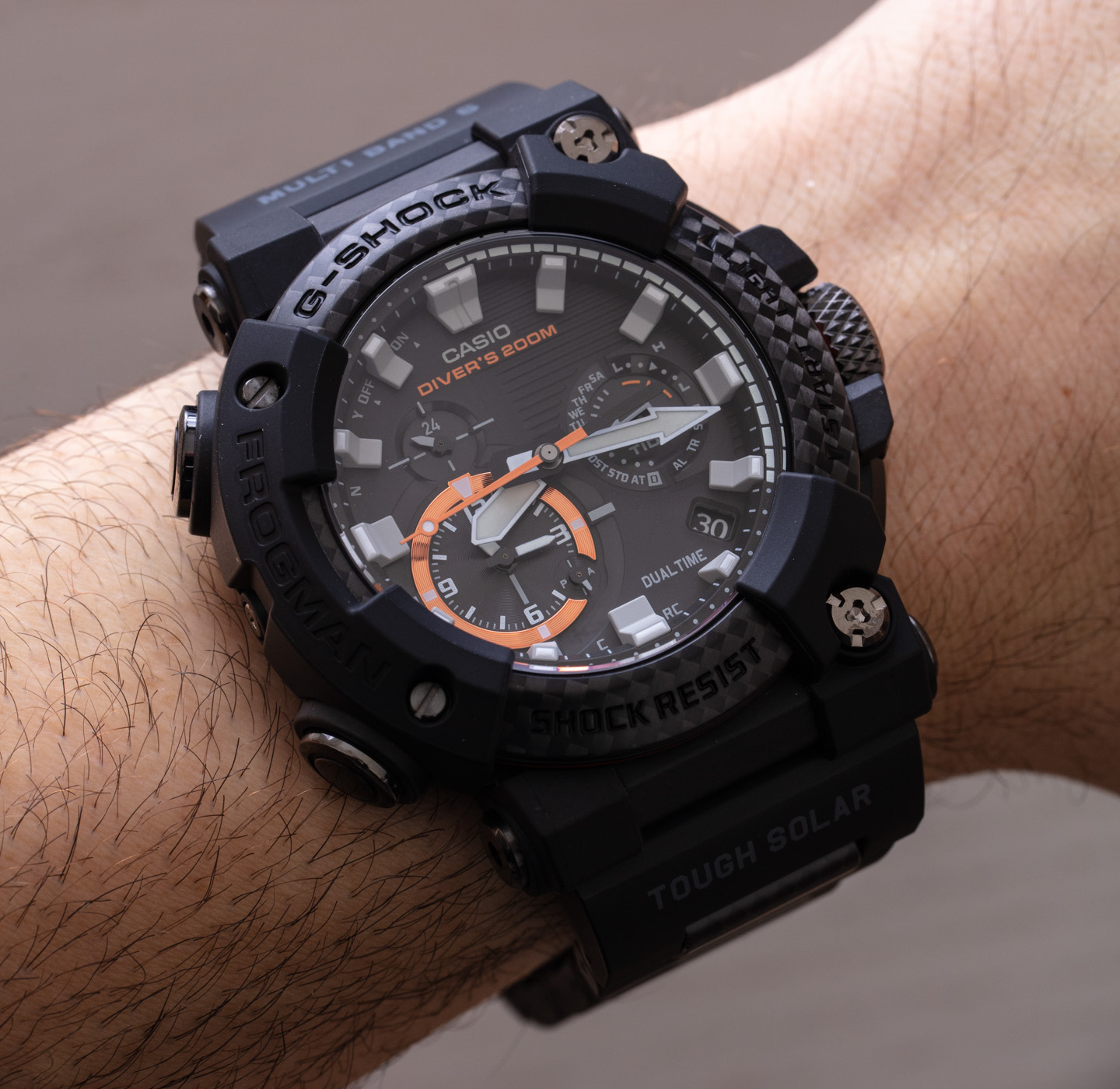 For 2021, Japan’s Casio debuts a stellar new member of the long-standing Frogman family with the reference GWF-A1000 (GWF-A1000XC as tested) collection. This new G-Shock Frogman watch collection builds on a long legacy of high-tech multi-purpose diver’s watches, with a major focus this year on new case material technologies with the “XC” addition to the existing GWF-A1000 lineup. Let’s now take a closer look at the brand new G-Shock Frogman reference GWF-A1000XC-1A in mostly black with orange accents.

One of the interesting quirks of the Casio Frogman is how the engineers designed it to sit slightly asymmetrically on the wrist. This is something other watches have done for a long time, but the Casio Frogman is among the only watches I know that has been invested in this design quirk for as long. More than for simple aesthetics, the positioning of the case a bit to the left is intended to allow for a large watch to wear more comfortably on the wrist when your wrist is bent (assuming the watch is worn on the left wrist) the watch and its crown don’t jab into your wrist. It works well, and despite the 53.3mm-wide size of the GWF-A1000, the piece wears with remarkable comfort. 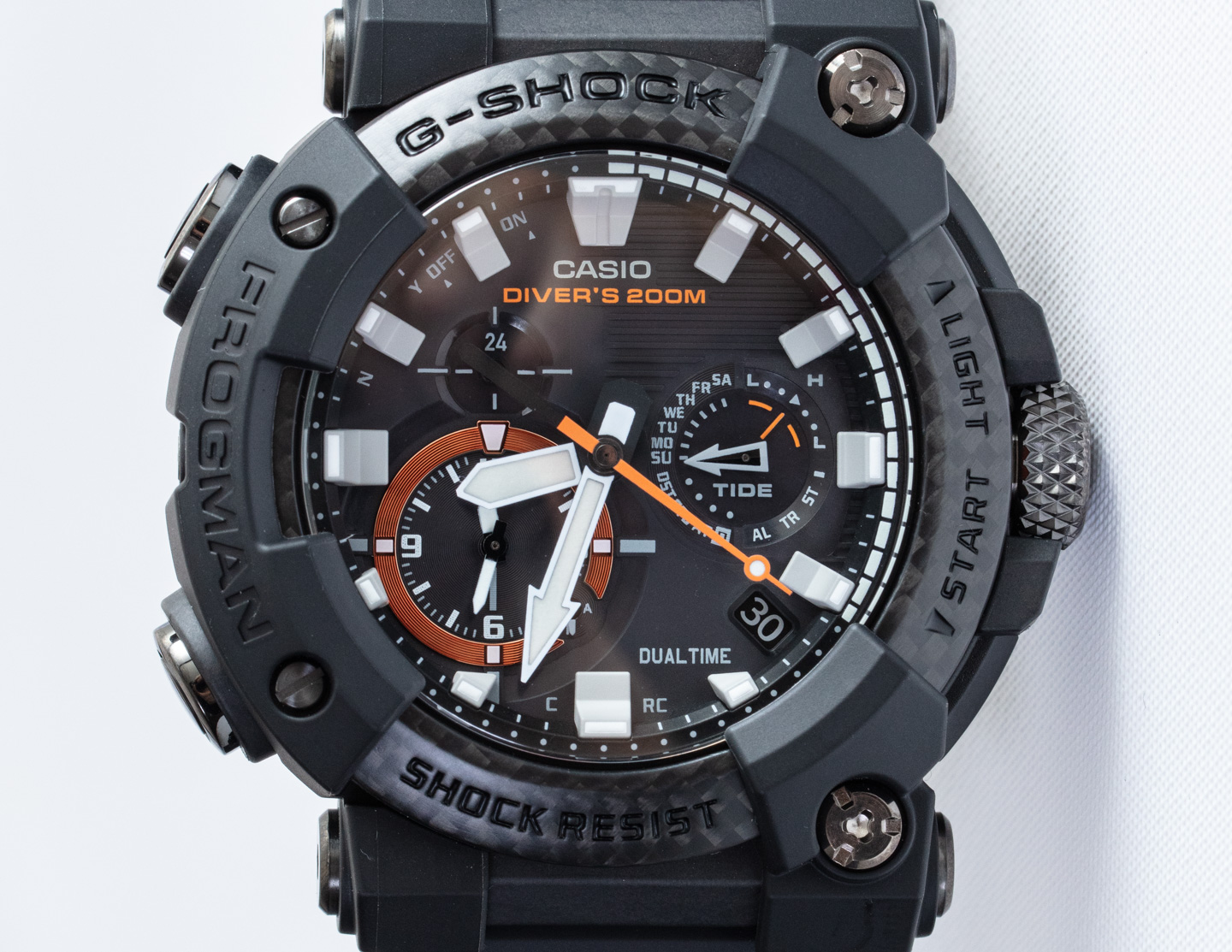 Part of the comfort is also related to the light weight of the case, which has never been more apparent in a beefy model such as the Frogman, until this year when Casio decided to strip out as much metal from the case construction as possible and replace it with various carbons, fiber glasses, and plastics. In fact, a major selling point of the watch is its use of Casio’s still-fresh carbon monocoque case construction (including the all-carbon caseback) and a bezel and some bracelet links produced from Casio’s layered carbon material technology.

The bezel, for example, is made up of at least three separate layered materials (easily visible since they are all different colors), which include a carbon fiber reinforced plastic in black, a glass fiber reinforced plastic in gray, and a new orange-colored glass fiber reinforced plastic. The bezel surface itself, along with the middle links in the bracelet, are produced using the same layered material technology. The result is an incredibly tough G-Shock case that has an attractive surface pattern, and that is also very lightweight. It’s very modern and a serious update from legacy G-Shock construction methods (that were already very good, to begin with). 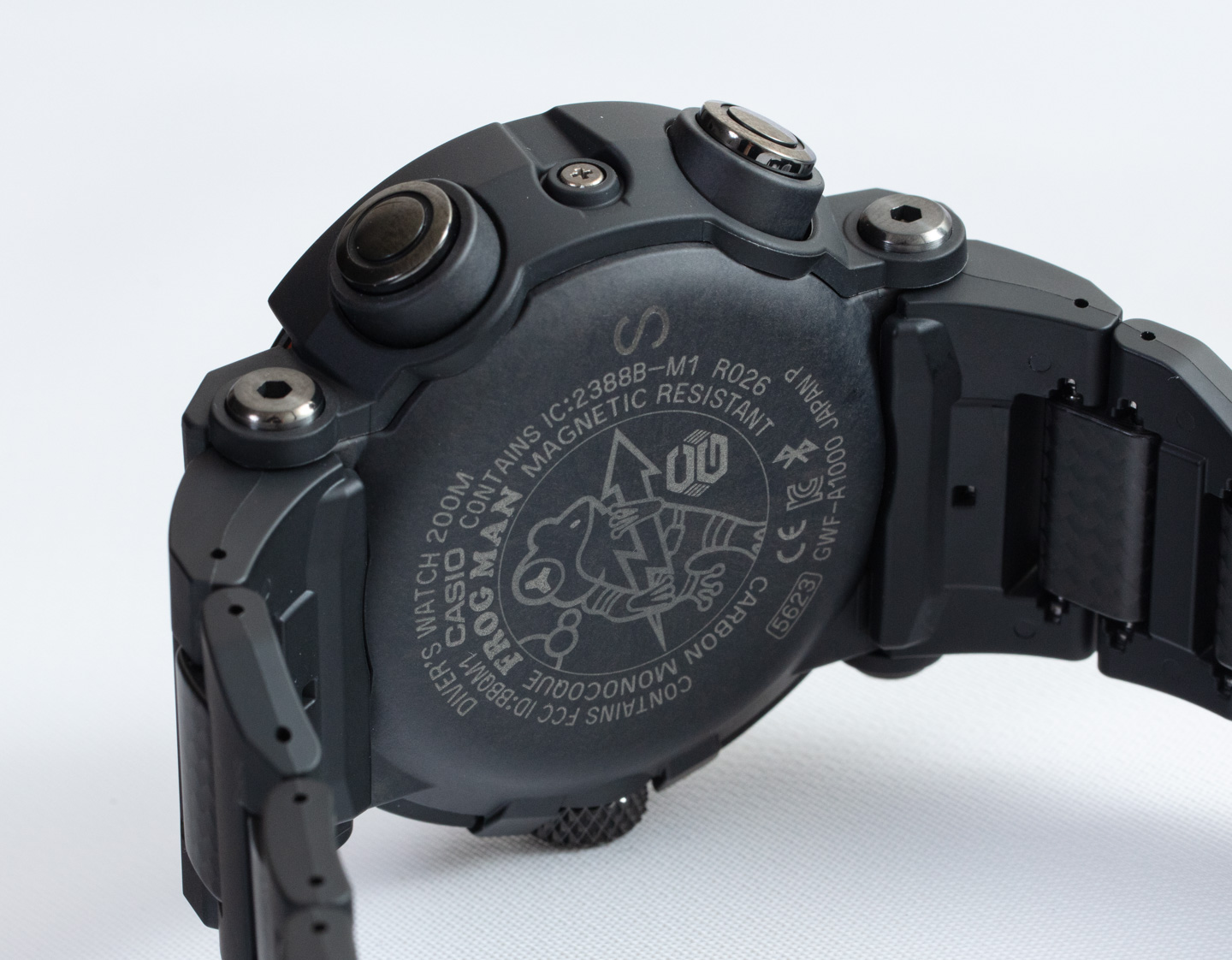 As a more high-end G-Shock watch, the Frogman GWF-A1000 has other attractive materials and features, including a sapphire crystal over the all-analog dial and a sophisticated Tough Solar movement with Bluetooth connectivity. More on the 2021 Frogman’s functionality and movement below.

The case is really long at 68mm lug-to-lug. This is the primary impediment to the Frogman being a bit more wearable on smaller wrists. The case is also about 18mm-thick and water-resistant to 200 meters. The case has four pushers as well as a screw-down crown. As a dive watch, the Frogman actually isn’t any more water-resistant than your standard G-Shock watch, but it does have some special diving-activity features that most other G-Shock models do not. 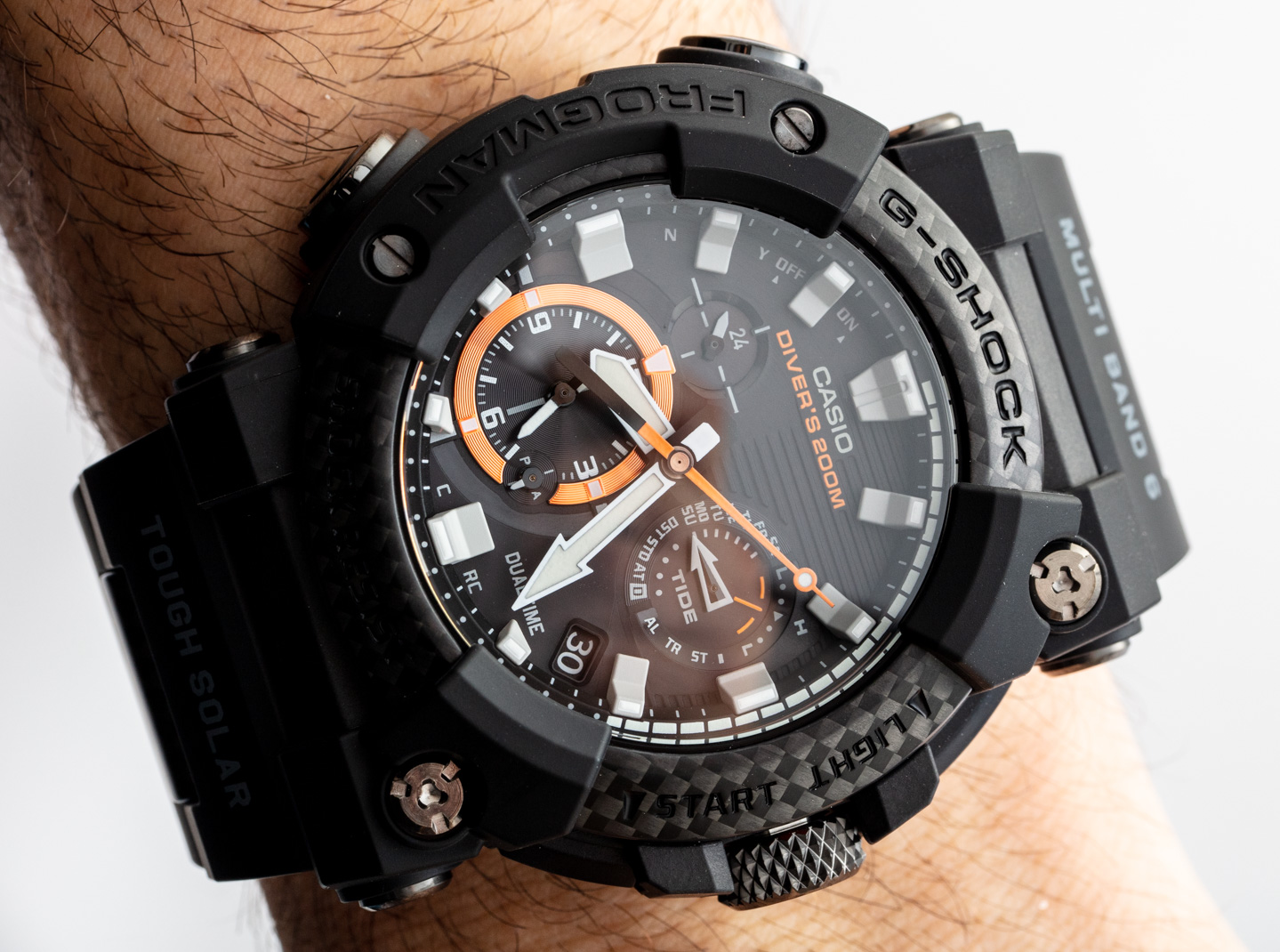 The bracelet is among the most interesting I’ve seen for a Casio watch. The style is traditional but the materials and construction are not. The bracelet tapers a bit toward the case in a particular way that other G-Shock watches don’t, making it quirky and cool. The bracelet is very light, using only steel for the spring bars that hold the links together, as well as steel reinforcement elements in some pieces. Like some other modern Casio watches, the bracelet doesn’t have tension rods in them anymore but rather small spring bars, similar to how most watches (not Casio) connect straps to watch cases.

The Frogman bracelet links are on the outside made from Fluorine, and inside made from the layered carbon material that I discussed above. The outer links have a satin-finished velvet texture, while the inner carbon links have a carbon fiber weave pattern. My favorite part of the bracelet is the deployant, which immediately takes the Casio G-Shock into modern luxury watch bracelet territory. The bracelet now has both a fold-out diver’s extension and a new micro-adjustment system that uses a snail screw that is turned with the tip of your finger. This is s similar concept to how some adjustable wrench tools work. It is a brilliant solution for a high-quality yet durable micro-adjust system and exactly what I like to see from the minds of Casio engineers. 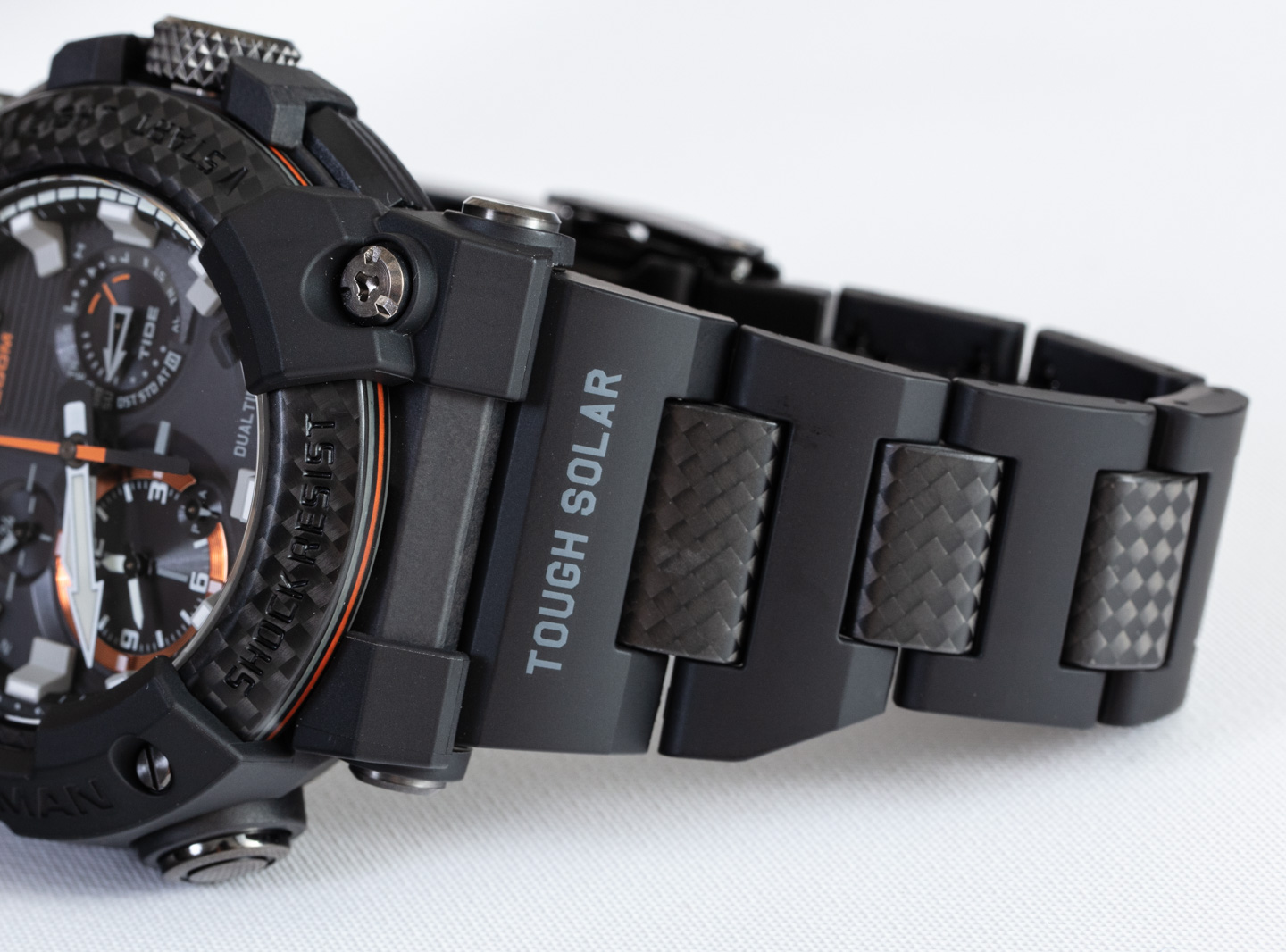 The dial is pretty nice-looking with a subdial arrangement now popular in many of today’s all-analog higher-end G-Shock models. Legibility is a priority, with large lumed hour markers and hands. The watch further features a bright “Super LED” light that can be activated, making it easy to read the dial. Aside from the main time, the primary other date on the dial is a 12-hour format subdial (with 24-hour indicator), a date window, and a function selector that also functions as a day of the week indicator or tide graph.

I’m very happy that the Casio module 5623 in-house quartz movement inside the GWF-A1000 watches has Bluetooth connectivity. Most modern G-Shock watches do, but what makes this especially positive (in addition to the watch’s time always being updated automatically) is that the G-Shock app allows you to set and operate the watch’s features from your phone, and not with a difficult-to-remember analog wristwatch operating system. The GWF-A1000 has some fancy features, such as a dive mode and dive time log and tracker. It also has a stopwatch, timer, alarm, calendar, and world time set of features. Using the app to set the alarm time or adjusting the second time zone is far easier on the app than via the watch itself. 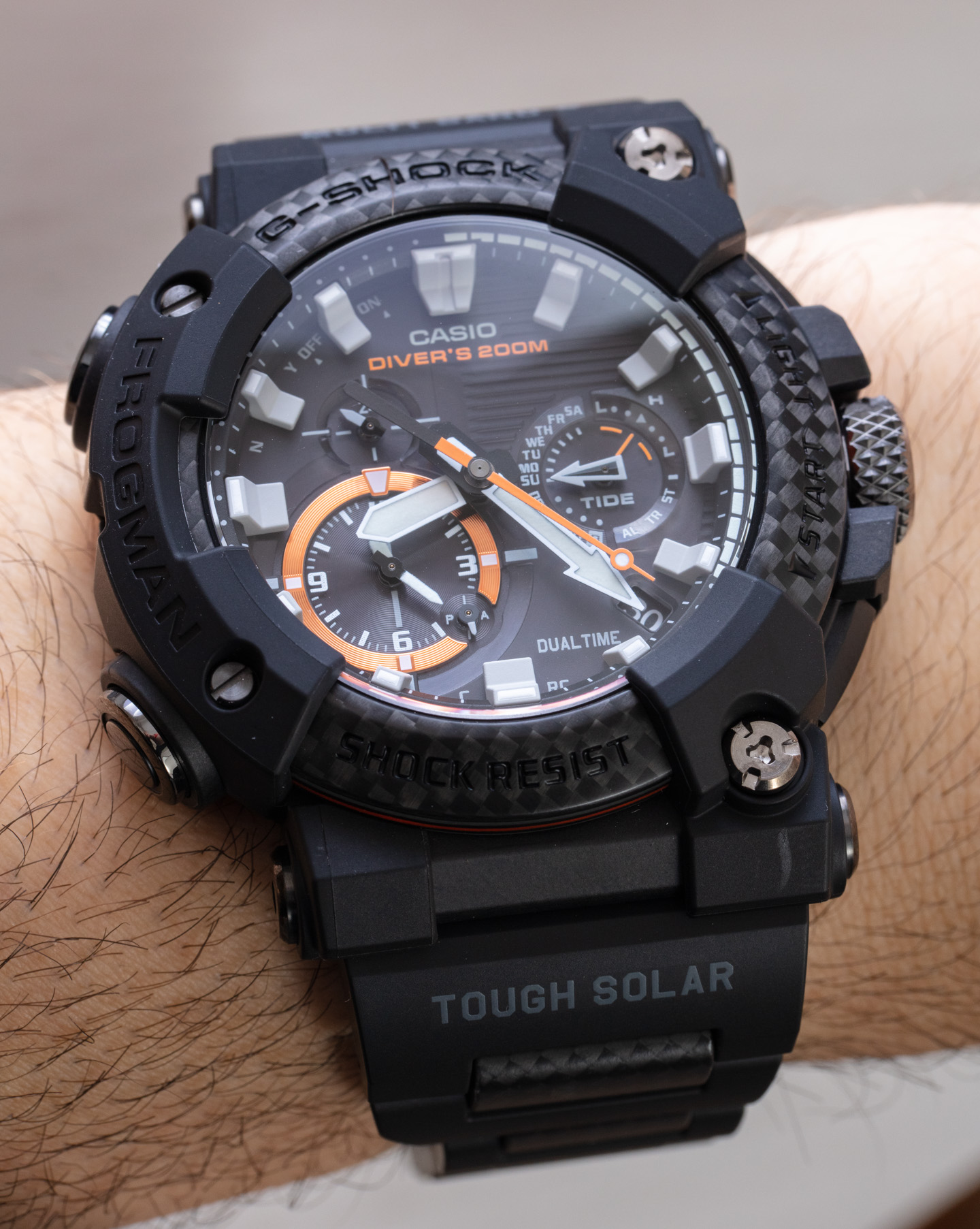 The movement also has access to atomic clock radio signals, and, being Tough Solar, is powered by light. I like the tide indicator feature of the Frogman the most out of all the non-standard G-Shock functions. The tide indicator is one of the diver’s watch features. Diving mode is a special feature for the Frogman that is manually activated and functions to time your times. This can be very useful as a backup dive time system, but the watch does not include sensors such as a diving depth indicator.

As a backup watch for recreational divers or people who want one of the coolest new G-Shock watches around, the 2021 Casio G-Shock Frogman GFW-A1000XC is an incredible product with an attractive design, lots of features, and materials that, just a few years ago, were not available in any Casio watch. The watch can rightly be accused of wearing large, but that is nothing new for Frogman watch models. This is really a military watch mixed with a diver’s watch trying to assert itself as an actually good tool. Add in the quirky looks and bold dial, and you have the type of high-end G-Shock that will excite a lot of buyers in the coming years. Price for the Casio G-Shock Frogman GWF-A1000XC-1A is $1,250 USD. Learn more at the Casio watches website here.