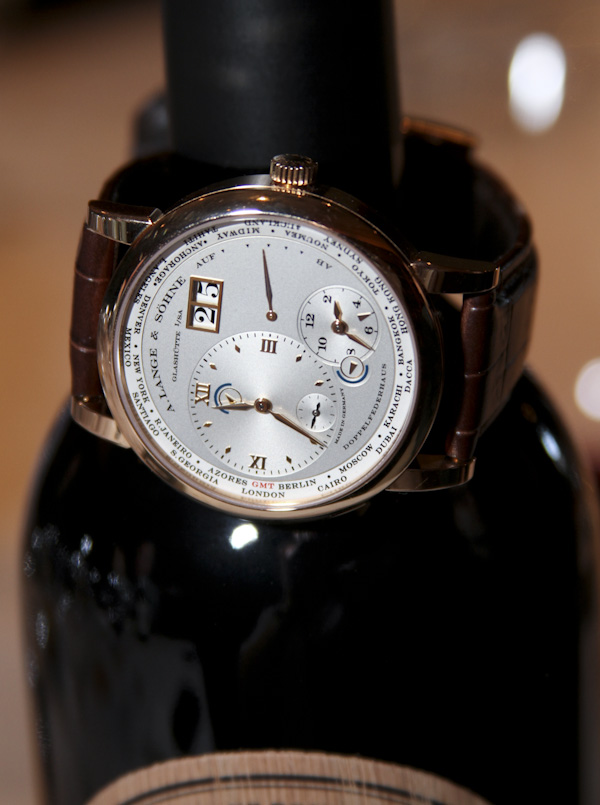 Back in early 2009 I visited A. Lange & Sohne’s manufacture in Glashutte. It was actually the first watch manufacture I visited, and now almost three years later I have much to compare it to. It is actually a shame that I saw Lange’s manufacture so early in my career because I did not properly know how to appreciate it at the time. Don’t get me wrong, I was thoroughly impressed during my visit, but I would have been much more impressed had I seen other places first that don’t necessarily deliver the same experience and level of product. Even on a larger scale, Lange is the type of brand you can only really appreciate after getting to know many other watches first. I think that by definition that makes it a connoisseur’s brand. 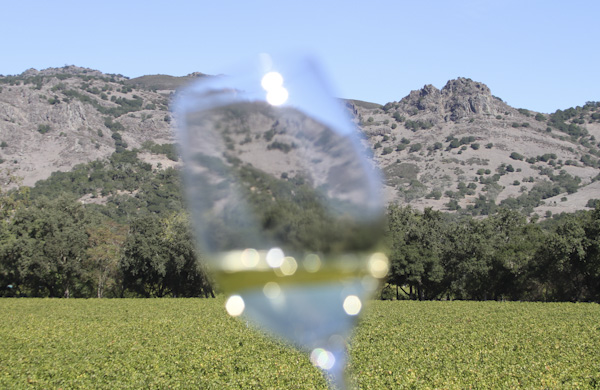 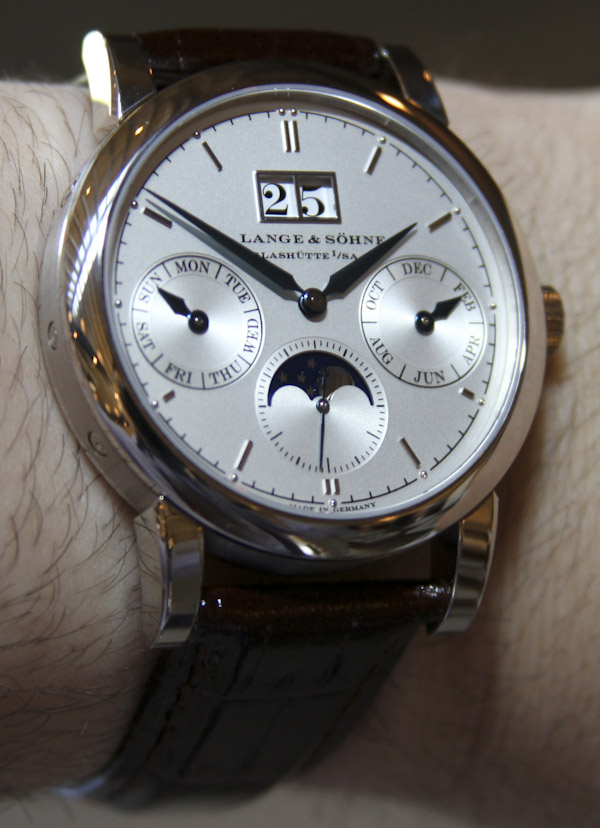 This idea gets me thinking about what it means to be a connoisseur and how watches fit into the overall world of connoisseurship. Here with A. Lange & Sohne in the Napa Valley testing and learning about wine and watchmaking is probably a good place to ponder these considerations. With passions like wine, cars, homes, cigars, travel, etc… out there, I realize that watch connoisseurship is just one piece of a large puzzle. Though these pursuits do each have things in common, especially when it comes to the price required to enjoy the best you can get. 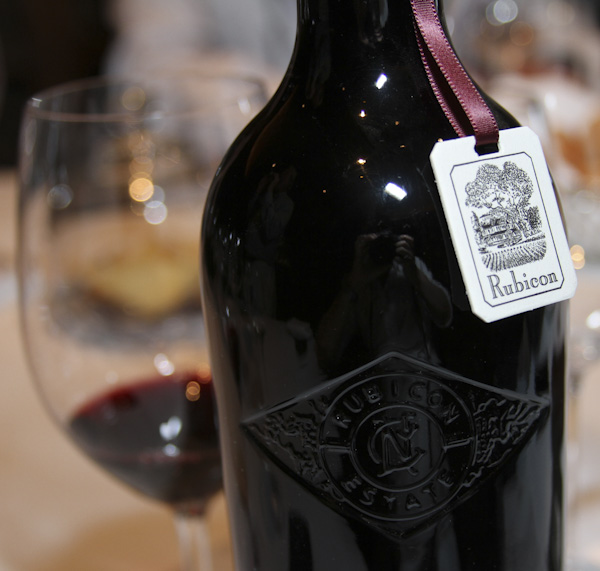 A connoisseur has passion and curiosity. He or she wants to understand all about the things that they love, why they are lovable, which are the most lovable, and how they may be able to love them even more. Connoisseurs take a hobby and turn them into almost an addiction. Connoisseur’s are a bit weird, and most of you reading this (myself included) proudly boast that this adjective applies to you fittingly. 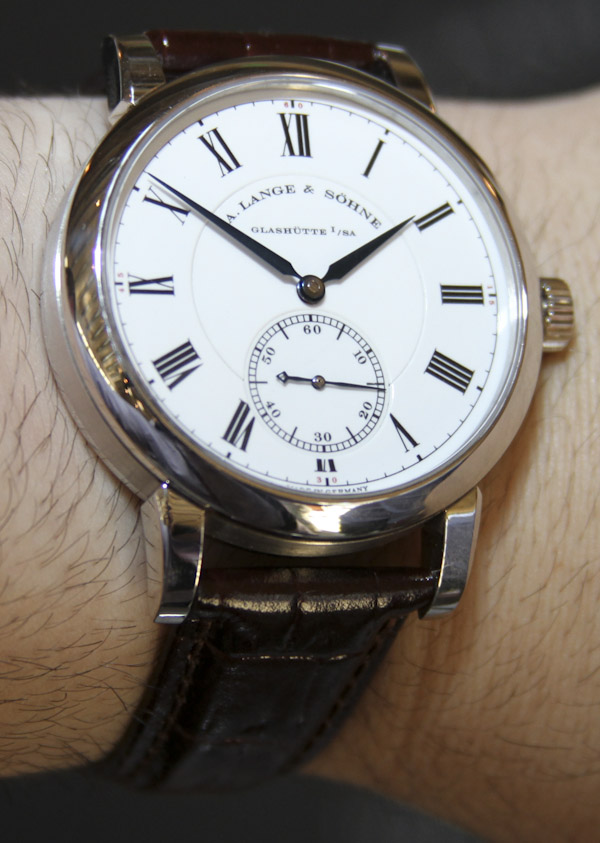 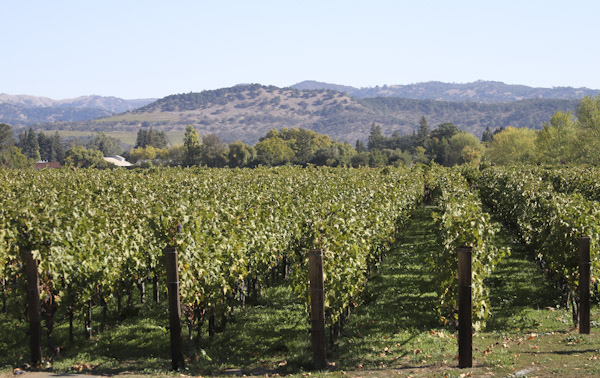 Like some of these other passions, you can enjoy watches while doing the other things you love. Watch can be an end unto themselves as well as an enhancer of life. You could say the same thing about wine. With a nice watch on my wrist I do find events more interesting to attend and activities more pleasing to complete. As I write this I wonder how much I am starting to sound like an horological drug addict. Maybe a little bit…but isn’t this the hallmark of a true connoisseur ($50,000 a day watch habit anyone?) 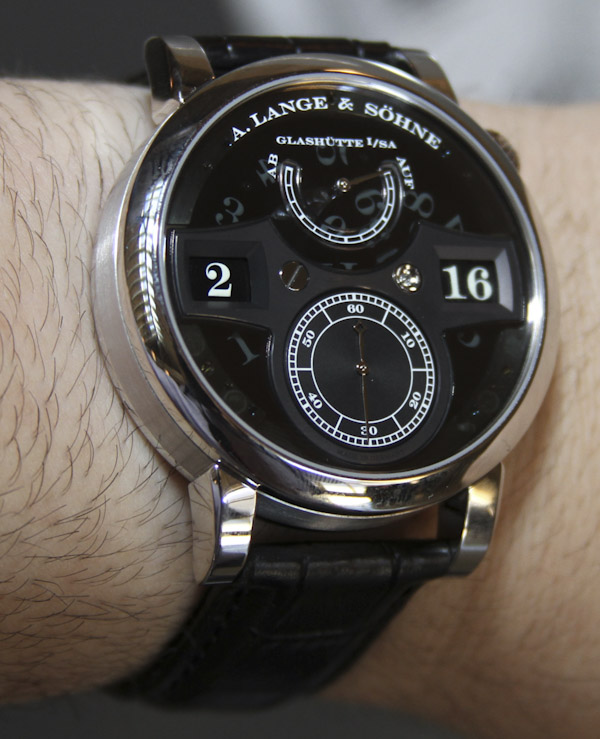 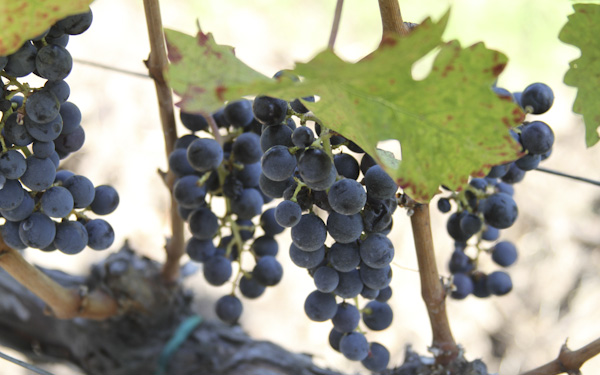 Out here with Lange they wanted to introduce us to a very compelling program they have called the A. Lange & Sohne Akademie. Typically a few days long in Glasshute, this workshop-based program teaches people both about the history of the great German brand and then offers hands-on experience in watch making, assembly, finishing and decoration. This sounds nerdy (because it is), but hanging out with watch makers is always cool and very educationally enriching. I participated in a light version of the program, and I was hungry for more. Nevertheless, I have to say that each time I learn more about Lange’s timepieces I end up wanting one even more. There is something so richly captivating about the brand’s timepieces that seems to transcend notions like “luxury” and “status.” Never has there been such a nice watch so little interested in calling itself the best. Even in Lange’s most high-end “Pour le Merite” watches, there is a steady sense of humility and quiet pride. Lange internally likes to call this “stealth wealth,” and in a large sense that’s what these watches are all about. 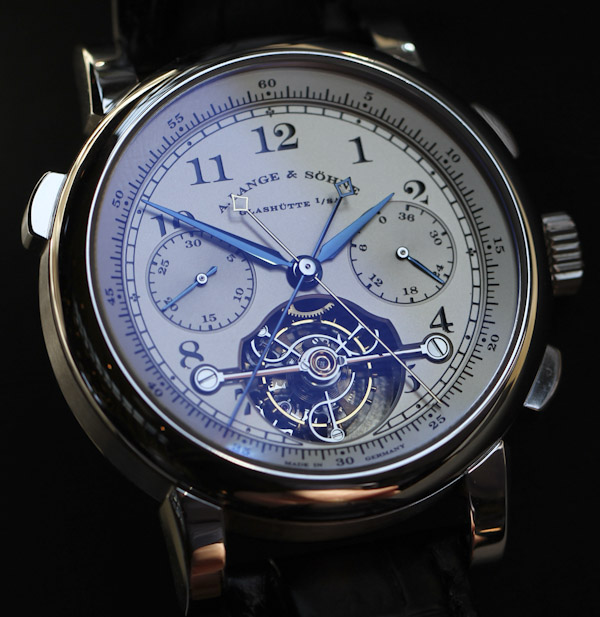 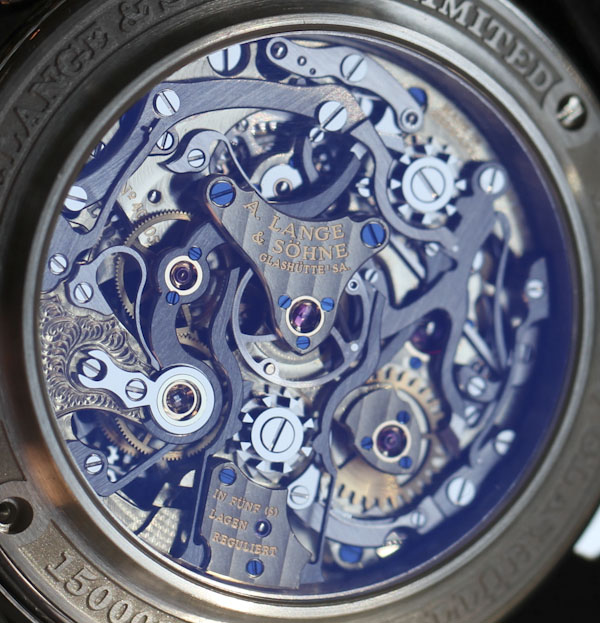 At the same time Lange has a lot pride itself on. A. Lange & Sohne is a complete watch movement manufacturer – they even make a lot of their own hairsprings. I discussed more about their manufacture and production process back in 2009 here starting in this article. In my opinion they make of the nicest watch movements in the world – if not the absolute best looking watch movements anywhere (amazing finishing as well). The German style differs a bit from the Swiss, and you’ll see that Lange movements offer different decoration and more exposed areas – especially in their chronograph models. Use of the iconic German 3/4 plates for the movements also improves the strength of the movements while offering a unique look. All Lange watches have hand-engraved balance cocks. A fun fact to know as you’ll never get tired of saying “balance cock.” These engraved areas are also beautiful to look at. Though what can I really say with words on the matter of beauty? Hence the pictures of these lovely Lange calibers. Anyone seeing them can agree they are pretty, but after years of seeing lots of other movements I can attest to them being beautiful.

By the way, for a very modest sum (like under $100 I believe) Lange will personalize the engraving on balance cock (people often like their initials there). The down side is that it must be specially ordered and the wait time for the watch is a few months. Though it is good to know that such services exist. Lange, in concert with other Richemont brands, are pushing their personalization services a lot so expect to continue to see interesting offerings. 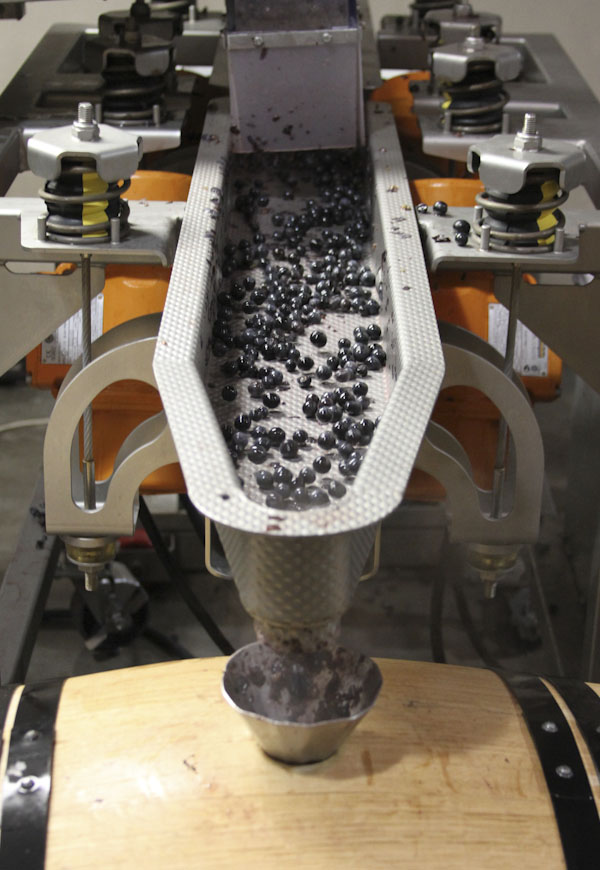 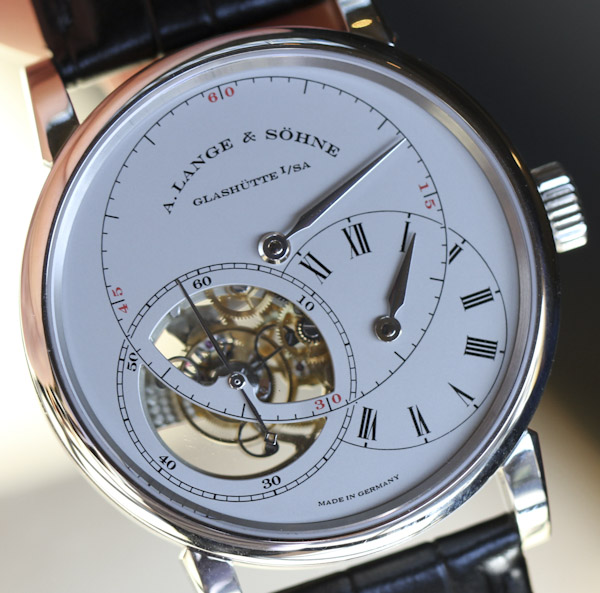 The context of the event being in the Napa Valley was to connect the world of watches with the world of wine. I felt that this was a logical as well as interesting move by Lange. They don’t sponsor any wineries or have official events here, though I’ve never been to a watch event that didn’t have good wine being served. Timepiece makers tend to like to keep the conversation on watches, but Lange’s people were more than happy to focus on the item of the area – the vino. That was great. They even taught us about German influences on wine making in the Napa Valley region. More interesting was the education on wine production itself. Similar to watches, the luxury is all in the details, and nothing wonderful can be mass produced. That and a good watch – like a good wine – can take a long time to develop and produce. 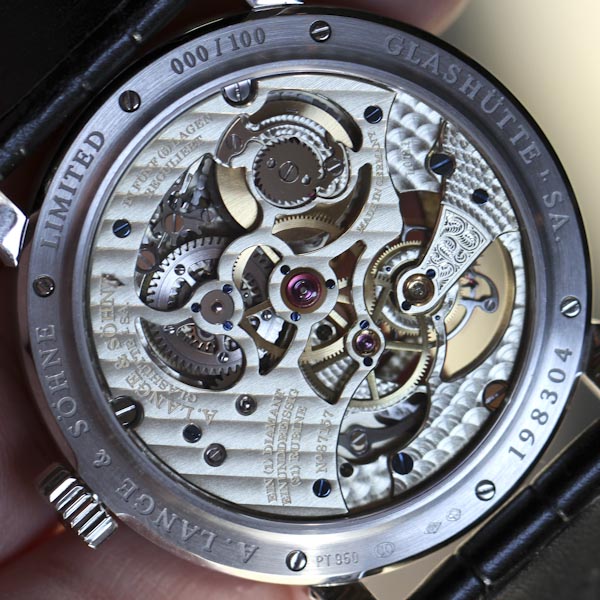 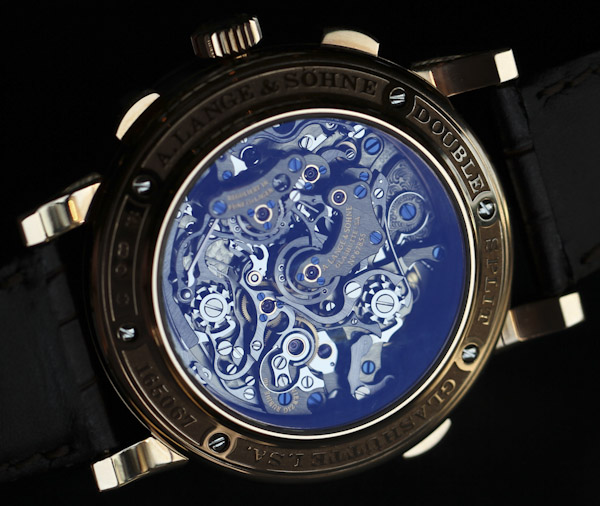 Anyone can enjoy a fine wine, but a connoisseur wants to understand what makes it so good. Listening to wine lovers discuss their favorite pours is interesting. I had no idea how much tiny differences in climate and conditions will dictate the taste of wine from even the same grapes planted in the same spot year to year. Being a wine lover and connoisseur is about noticing and appreciating the details. I would say that the same rule applies to the enjoyment of timepieces. When I first learned about Lange watches I wasn’t too moved. This was early on in my watch loving days and I was mostly interested in techie, novel things. Lange seemed like a storied brand that perpetuated a look from a different generation. That is actually totally true, but their stories are good, and the look they perpetuate is refined and highly effective. What they manage to do is make an extremely high quality classic watch that never feels boring – a difficult task I promise you. As is the case with wine, you want something highly refined that does not shock the senses. 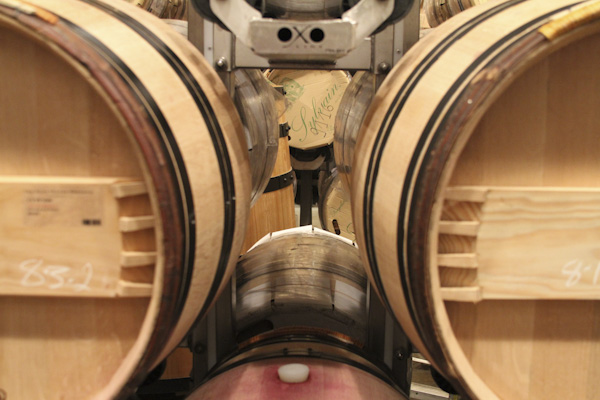 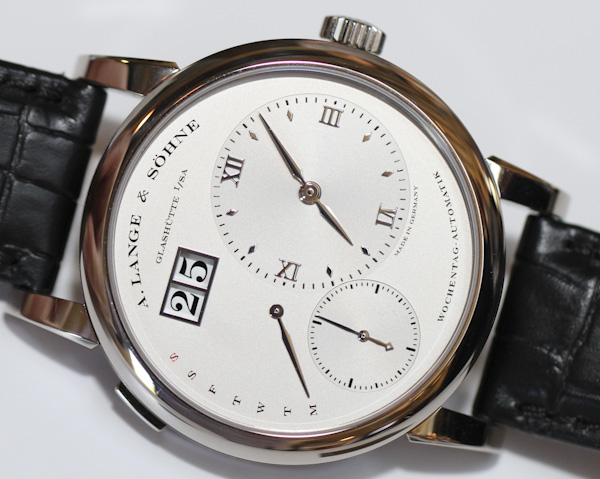 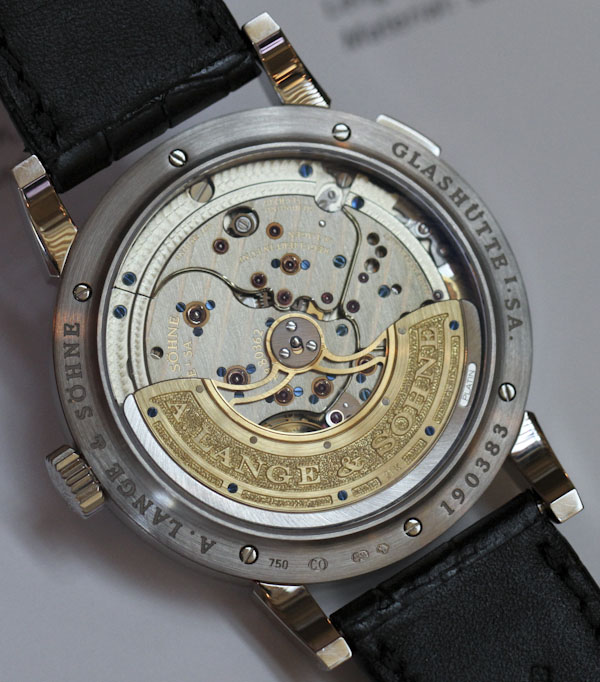 There are similarities both interesting and relatively trivial between wine and watches. Though both are things that people have been spending their lives obsessing over (for 100s of years). Don’t make me state how watches, like wine, get better with age. I must admit that wearing a nice Lange timepiece on your wrist while enjoying a good California wine does seems very natural. A. Lange & Sohne had me convinced a long time ago that their watches and work is fantastic. No one really seems to disagree. In that sense they are among the least controversial timepieces I know. The single complaint I’ve ever heard about their watches is the price – which of course is not inexpensive. At the same time Lange watches could be priced higher. Each piece is hand assembled, finished, and decorated. Each movement is assembled twice, and each watch comes in a precious metal case. That and each A. Lange & Sohne watch is useful. They make few pieces that (assuming you could afford it) would not sit comfortably as a daily wear. 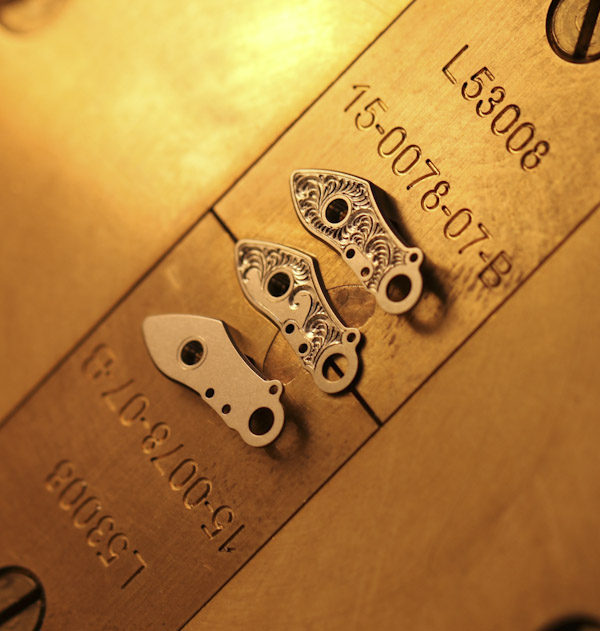 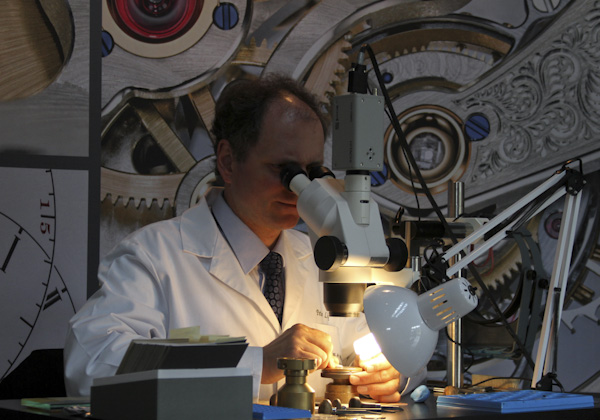 It was a pleasure to celebrate wine connoisseurship with a connoisseur’s watch brand. The experience helped me think about how passion and being a connoisseur intersect, as well as identify the best way to appreciate an A. Lange & Sohne watch. No, not necessarily while drinking, but rather with experience and good taste.