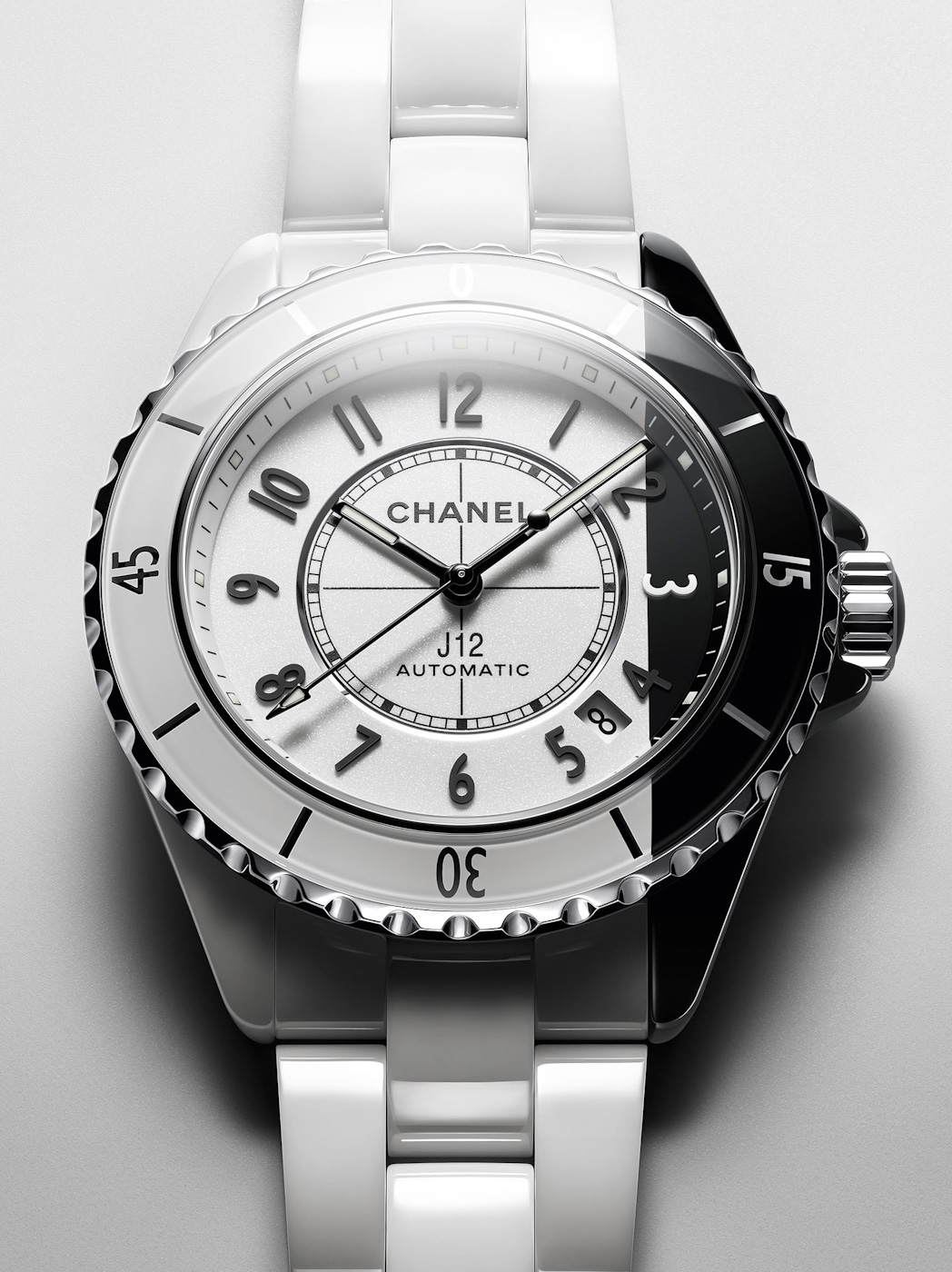 Chanel has long been a pioneer in the use of ceramics in watchmaking, helping to spark the ceramic watch trend itself with the release of the original J12 in 2000. Over the past two decades, as ceramics have increasingly become a go-to material for luxury timepieces, the atelier has continued to innovate in the field, and for 2020 it has made another giant leap with the now iconic J12 platform. The Chanel J12 Paradoxe, announced this week by the brand, is the first ever watch to feature a fully ceramic case rendered in two separate colors — in this case, starkly brilliant black and white. There’s no denying this is a major technical achievement, especially at a time when other high profile brands are still working on developing two tone ceramic bezels, let alone cases, but there’s more to the J12 Paradoxe than just the colors. 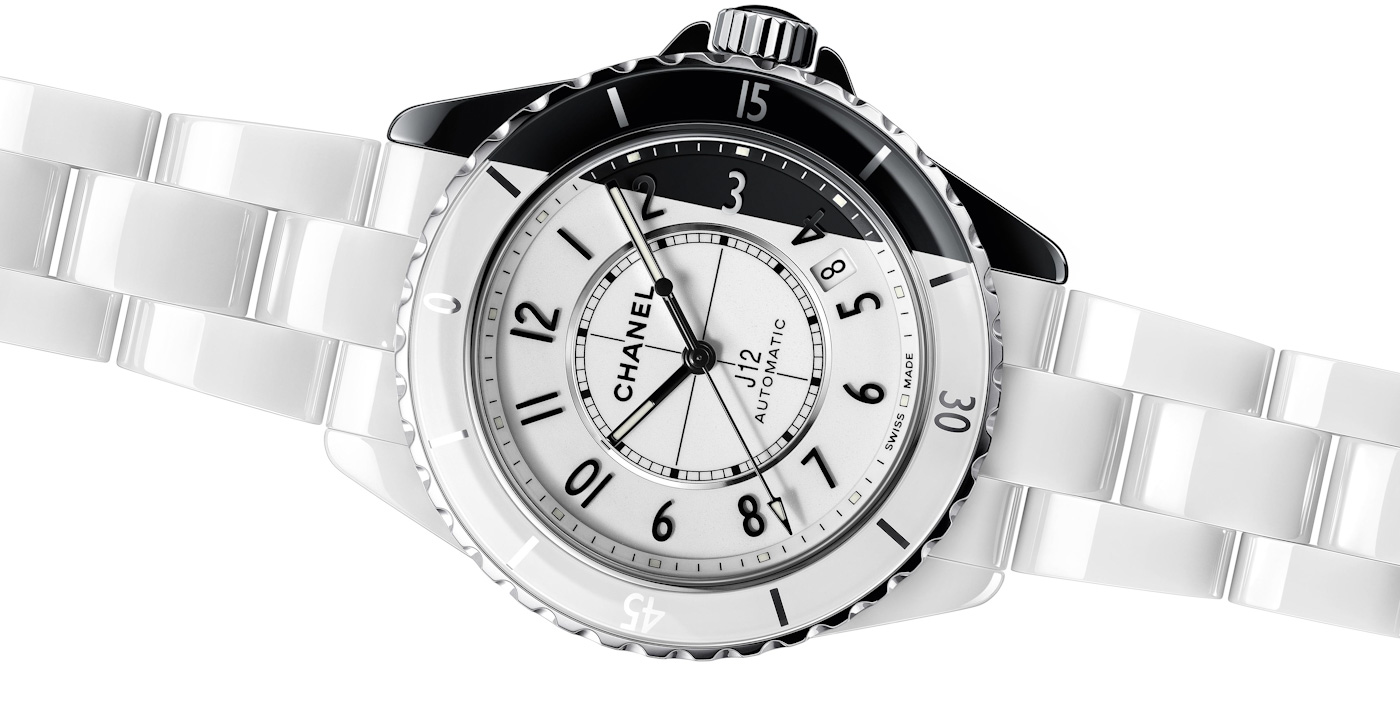 Naturally, the 38mm ceramic case is the Chanel J12 Paradoxe’s greatest novelty. The uneven black and white split, meant to hide undetected beneath a cuff or sleeve during daily wear, is immediately visually arresting if for no other reason than sheer contrast. It feels punchy, confident, almost “pop art” in its execution, but how was this effect achieved? Behind the scenes, the process seems simple. What appears to be one solid case begins as two separate cases, cut apart and then fused together around a metal sub-case frame. However, with modern scratch resistant ceramics, cutting cleanly through something as complex as a watch case is no mean feat, and Chanel has dedicated significant time and effort into perfecting this delicate process. The fixed bezel insert mirrors this two-tone approach, but instead of using the same fusion method Chanel instead colors each bezel completely black and then adds the white segment using tampography. The combined effect is striking, but with a joined multi-part case design such as this water resistance is understandably low at 50 meters. 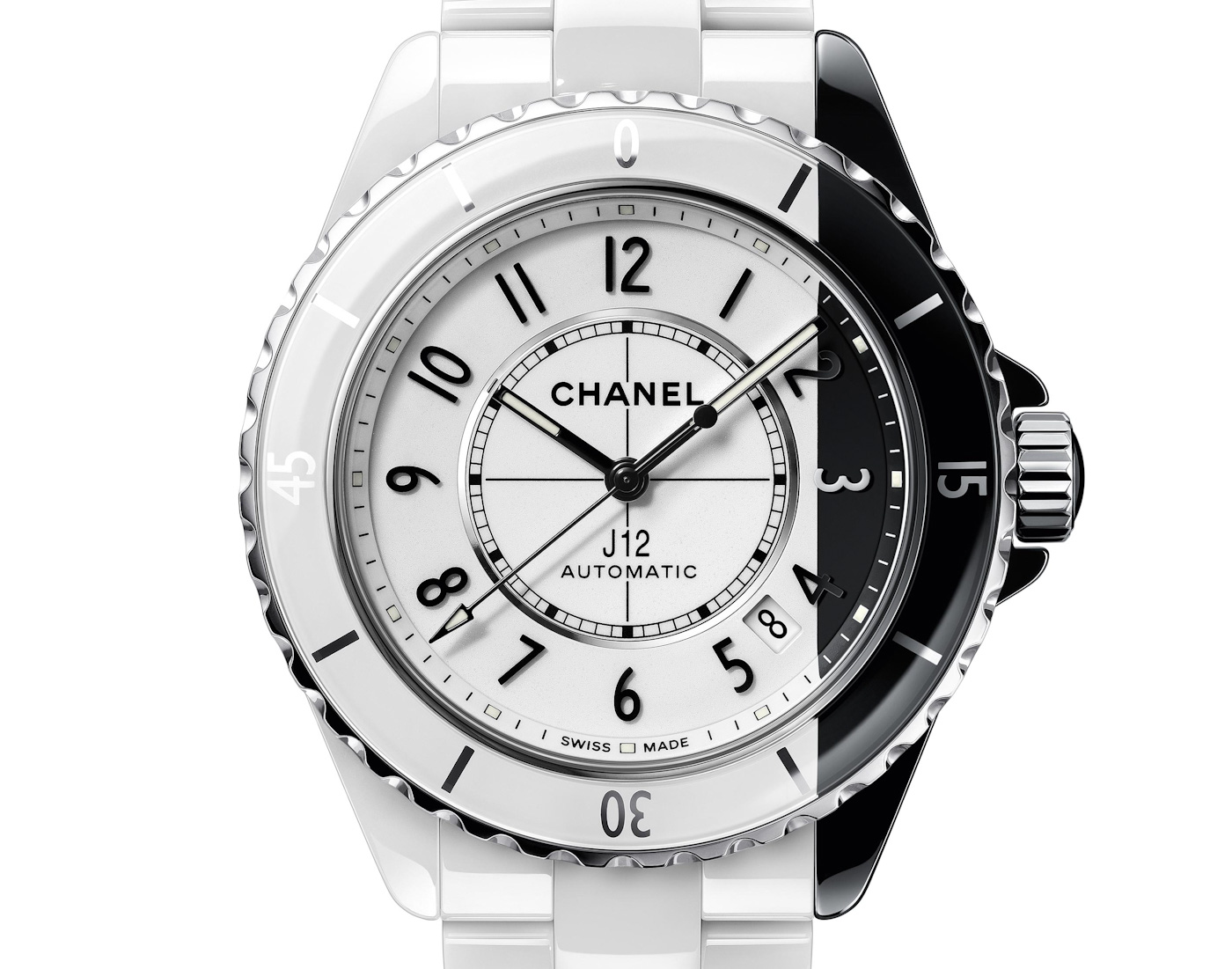 The lacquered dial of the Chanel J12 Paradoxe mimics the cases split tone design, adapting the J12’s standard central railroad seconds track and applied Arabic numerals to the new design with careful attention to detail. The separation between colors flows smoothly between case, bezel and dial in perfect alignment, while the 3 o’clock applied numeral is rendered in an inverse white to contrast against the black of its dial segment and the other numerals. Perhaps the only gripe with this bold off center design is the date window at 4:30, which slightly spoils the visual balance at play. A no-date version, while unlikely, would be excellent. 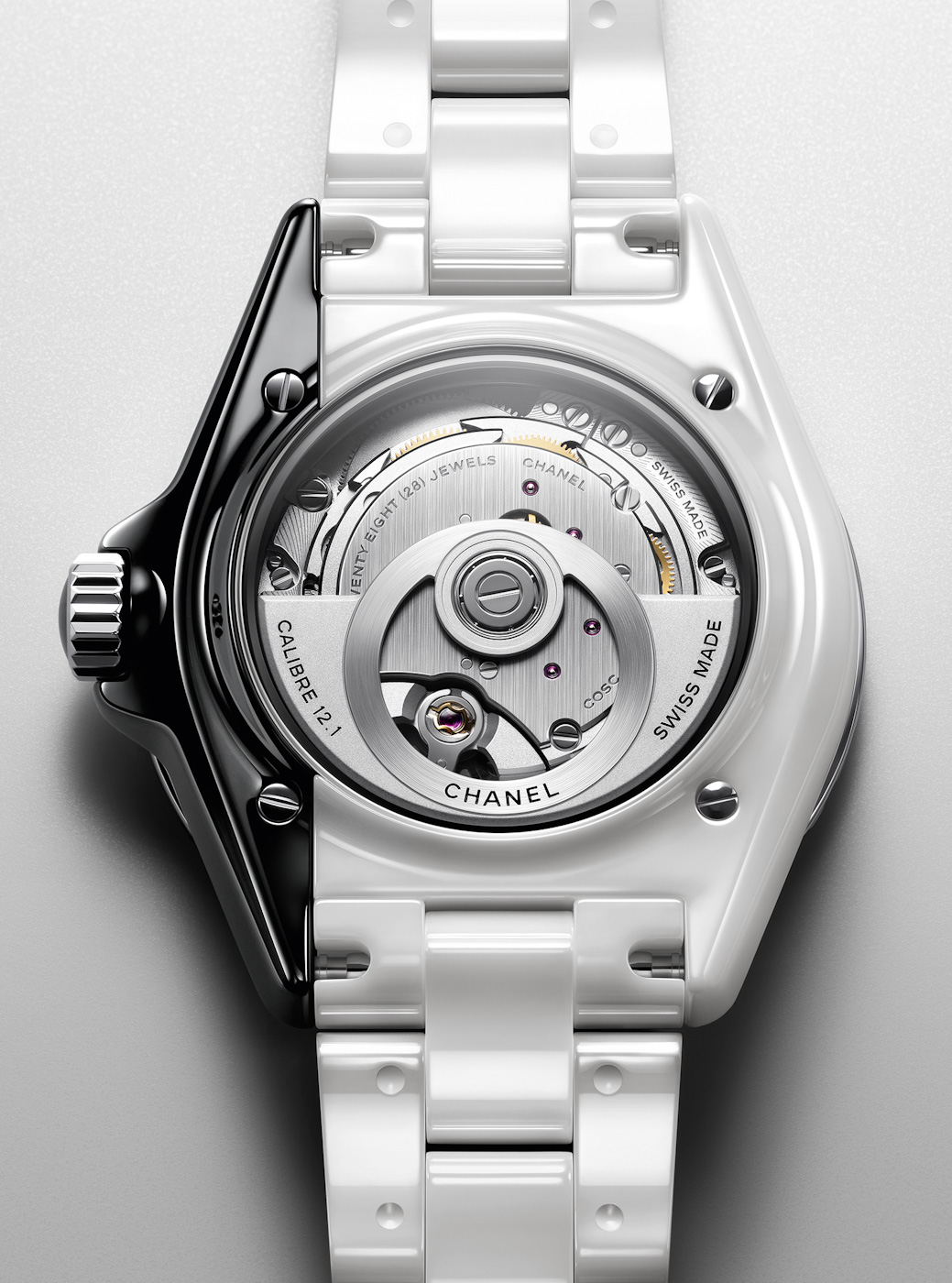 The J12 Paradoxe is powered by Chanel’s own Caliber 12.1 automatic movement, visible through a display caseback. The movement is COSC chronometer-certified for accuracy and features an impressive 70 hour power reserve as well. As might befit a Chanel product, the movement is elegantly if sparsely decorated, with snailing around the outer edges, mirror polished bevels, and the unique tungsten Chanel winding rotor with its wide and dramatic circular cutout. 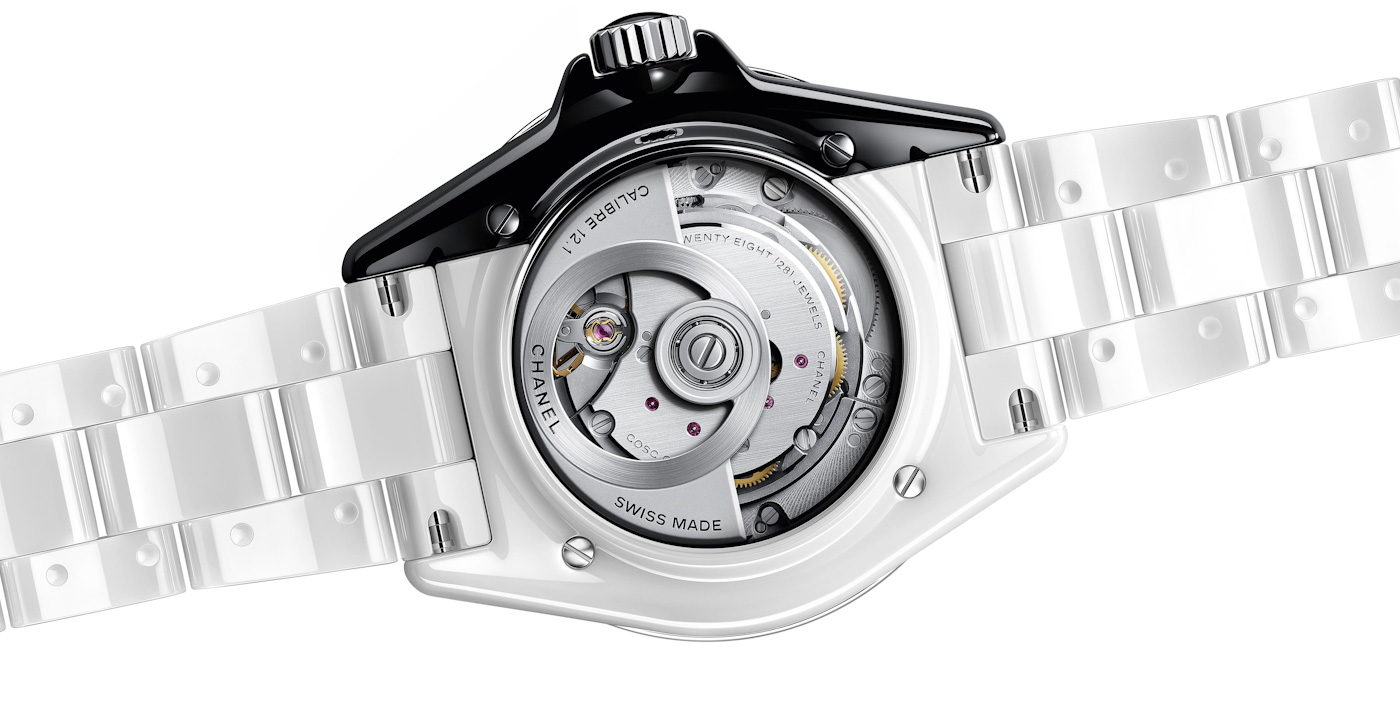 While the case and dial of the J12 Paradoxe are split between black and white tones, the bracelet here sits entirely on the white side of the line. This oyster style ceramic bracelet may be familiar to fans of the brand, but the tight tolerances and almost liquid gloss finish remain visually impressive along with the signed butterfly clasp.

As the Chanel J12 enters its third decade of production, it’s clear that the brand has no intentions of resting on its laurels. This innovative new take on the contemporary classic may be an opening salvo in an entirely new and bolder generation of ceramic timepieces, but as a standalone product the watch is no less striking. The J12 Paradoxe is slated to officially debut at Baselworld 2020, and will be priced at $7,150. For more information, please visit the brand’s website.