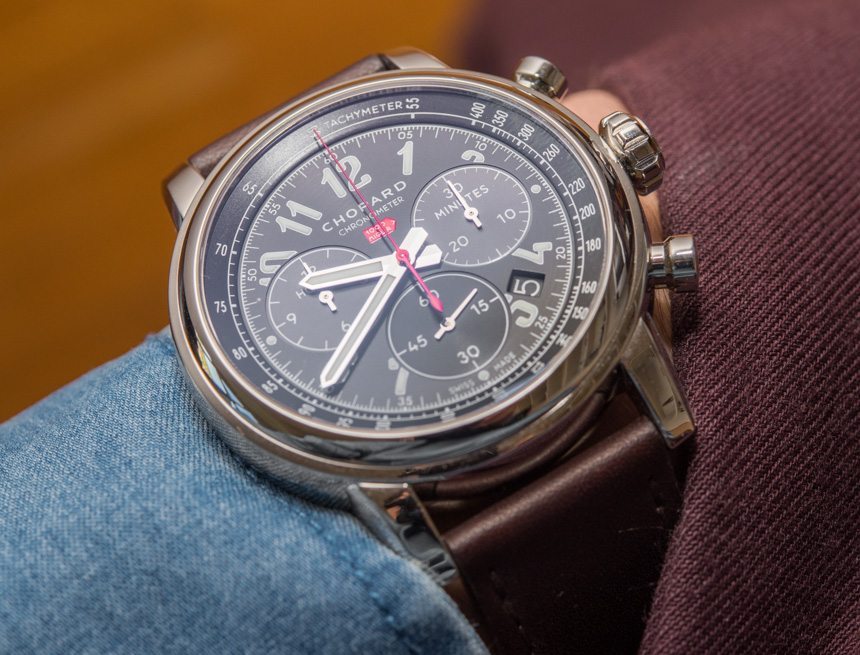 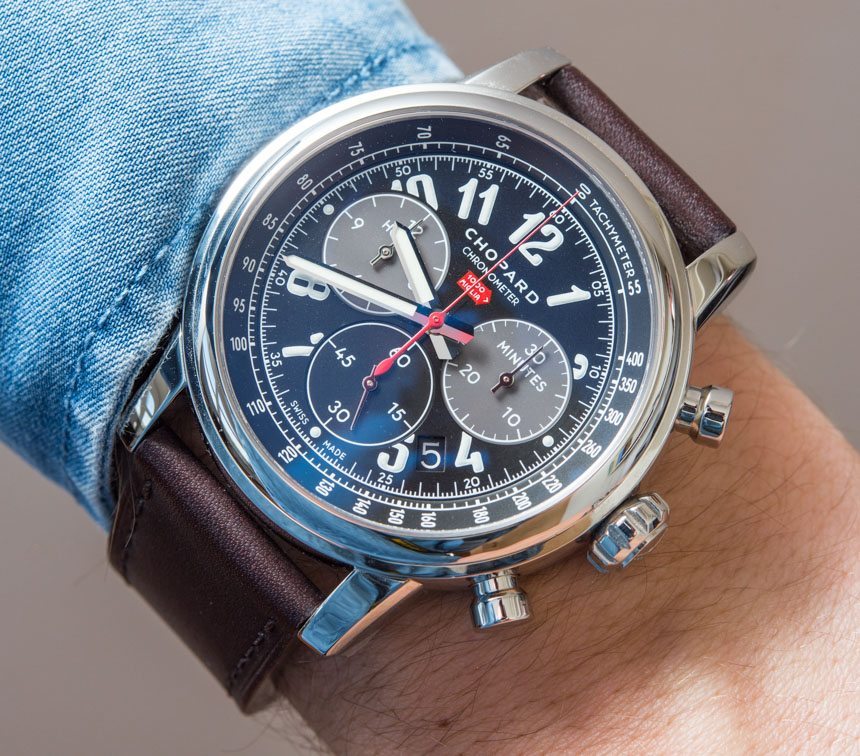 Car racing and watches: such a seemingly ever-young combination, tirelessly perpetuated by the countless automotive-inspired watches released year over year. Despite the highly saturated segment, there actually are very few watches that can pull off this racing vibe and remain wearable for the times when, you know, you are not driving your Porsche 550 Spyder on the twisty roads along the Côte d’Azur. The Chopard Mille Miglia 2016 XL Race Edition (reference 168580-3001) promises to be one of these few, offering a mix of subtle Mille Miglia branding and not-so-subtle vintage racing-inspired design elements. Let’s see how it performs – not on the race track, but on the wrist. 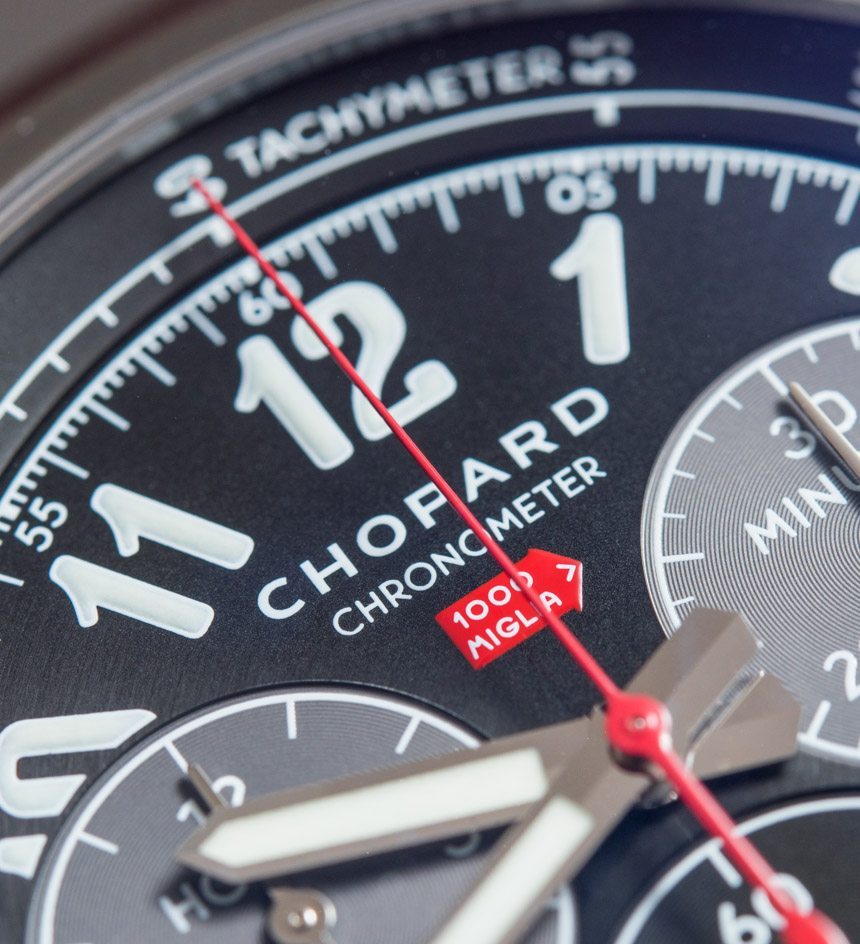 A Few Words About The Mille Miglia

The Mille Miglia has to be one of the more obscure, and yet – reportedly – most amazing car racing series organized today.

Held earlier this year, between May 19th and 22nd, the event featured more than 400 teams, competing over the one-thousand-mile (around 1,600km) distance between Brescia and Rome. The Mille Miglia is reserved for classic and vintage cars that have been a part of the historical races between 1927 and 1957 and leads through some R-rated driving roads of Italy. Since 1988, Chopard has served as historical world sponsor and official timekeeper of the car rally also known as “the world’s most beautiful race.” 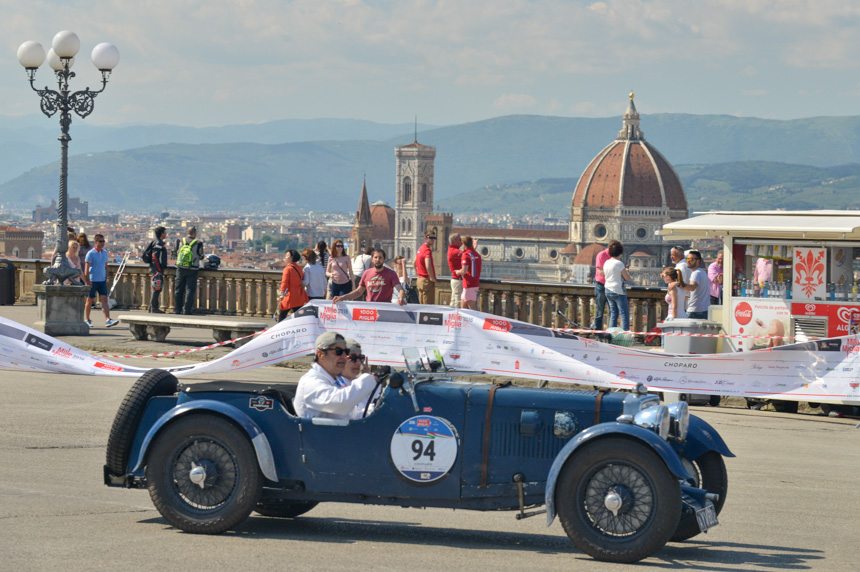 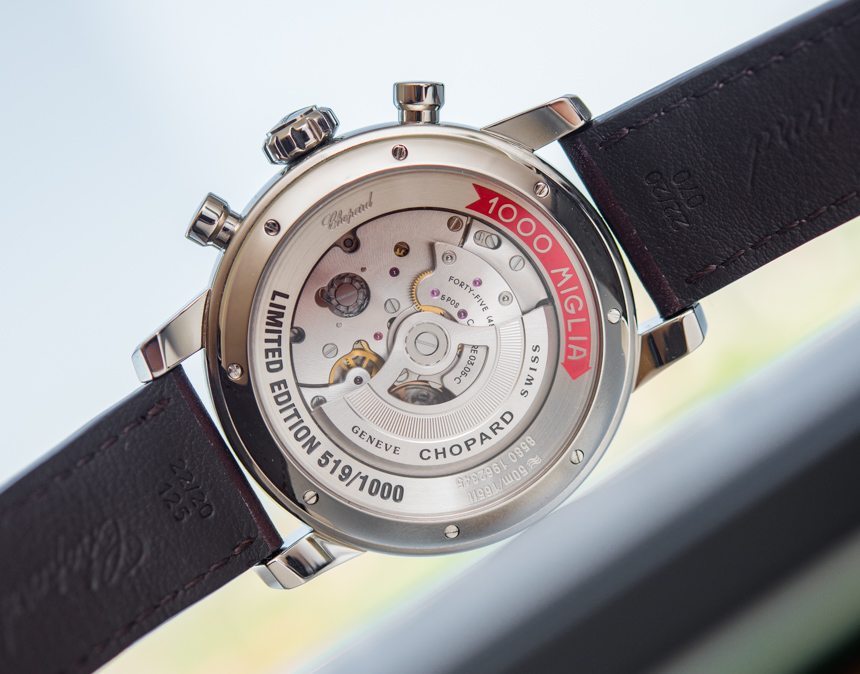 Sounds like a magnificent time to be had… Yet, somehow, I have always felt that while it is a race based on admirable heritage and a genuine appreciation of vintage race cars, the number of Chopard watches dedicated to it, as well as the emphasis placed on plastering Mille Miglia everywhere on most of said watches, was a bit overkill for many prospective buyers who would otherwise have liked the design, price point, and quality of Chopard’s racing-inspired timepieces. It has to be a terrific race, no doubt about it, but I always wondered if its fan base was as large and as dedicated to the event as it would need to be to justify previous Mille Miglia watch designs. 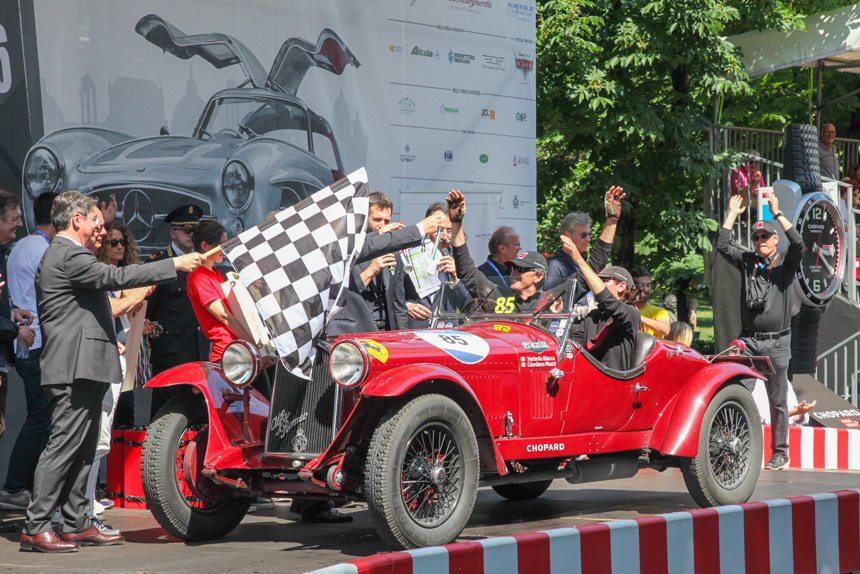 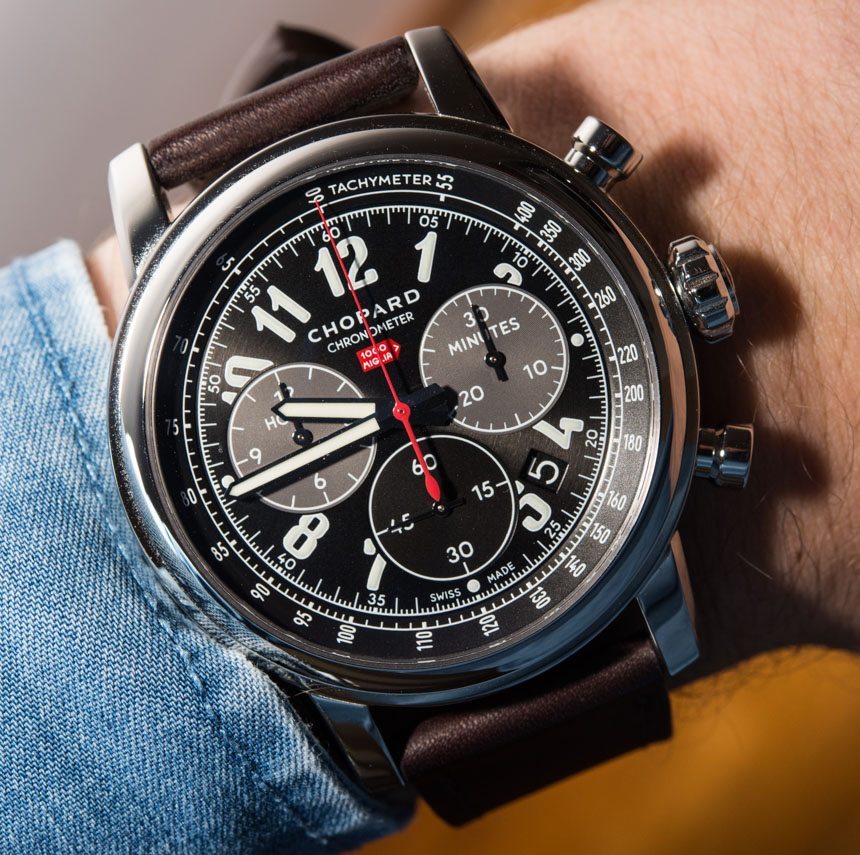 This reason exactly is why I was excited to review this Chopard Mille Miglia 2016 XL Race Edition: on the front of it, there only is a small, and in fact beautifully integrated Mille Miglia logo at 12 – and that’s all the co-branding that you get pushed in your face. “Finally,” I thought, “a Mille Miglia watch that will be about restrained sportiness the way Chopard does it and about me wearing it all the time… and not about a 4-day event I can hardly relate to.” Co-branding and enhanced brand exposure is nice and all, but tasteful design and long-term wearability should come first, I think. 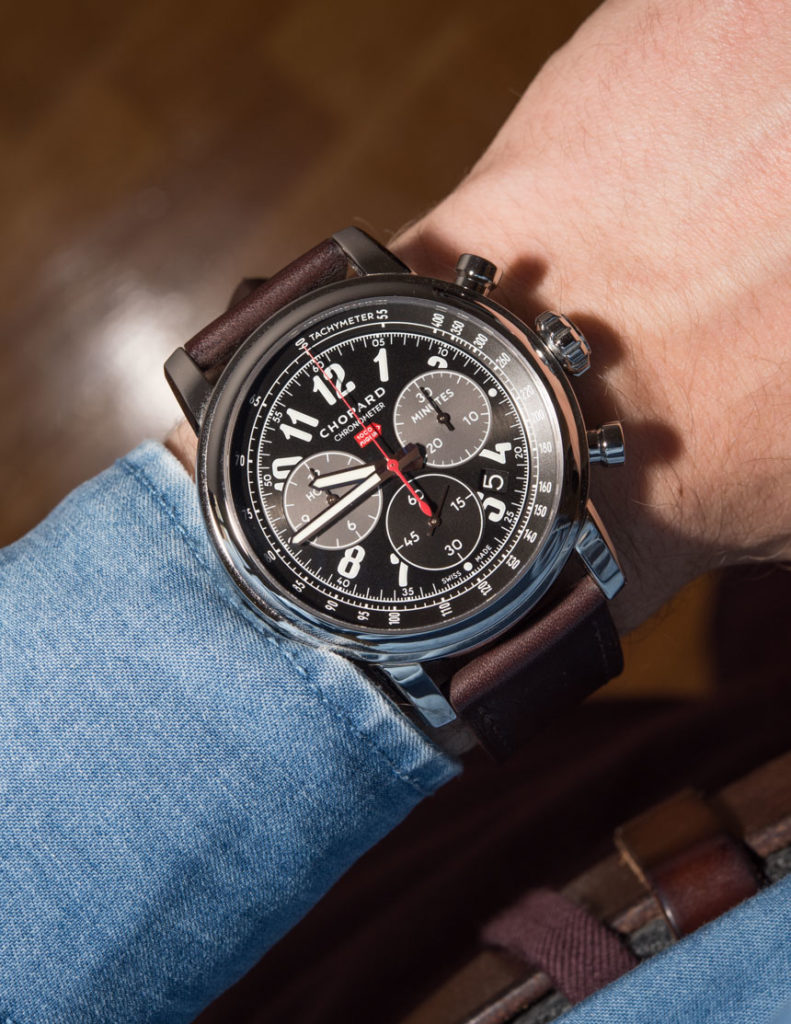 From the moment of putting it on my wrist, what I liked most about the Chopard Mille Miglia 2016 XL Race Edition was that it actually is not a race edition. No perforated straps, no in-your-face branding, no carbon fiber, not even a tachymeter engraved bezel! I could sense the sportiness and the “racing inspiration” in the design – it was there from the get-go – but it was hidden under a thick layer of nicely balanced, timeless chronograph watch design. 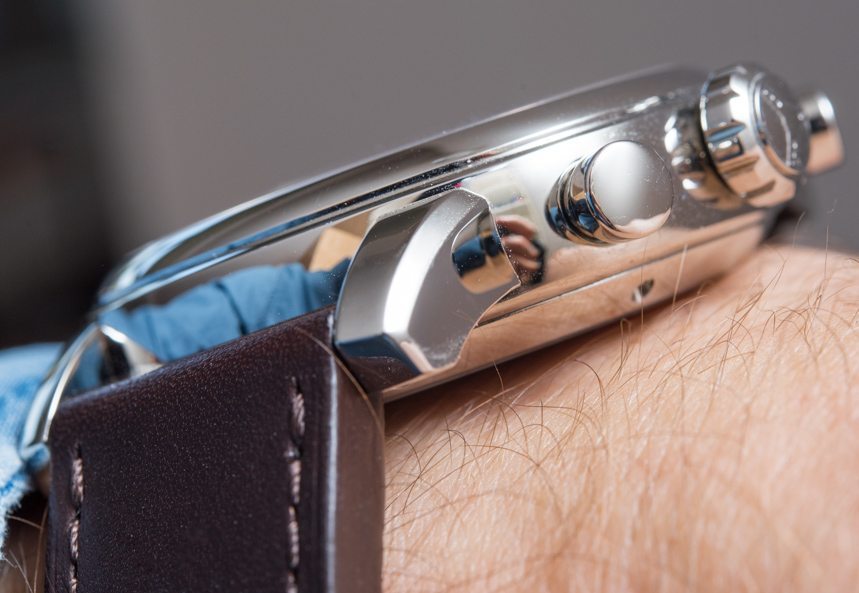 Its perfectly round, 46-millimeter-wide case is inarguably large, but with its piston pushers, vintage wheel hub-shaped crown and long, straight lugs, it is as elegant as it is sporty. A rather impressively performed tight-rope walk between these two, often mutually exclusive vibes. 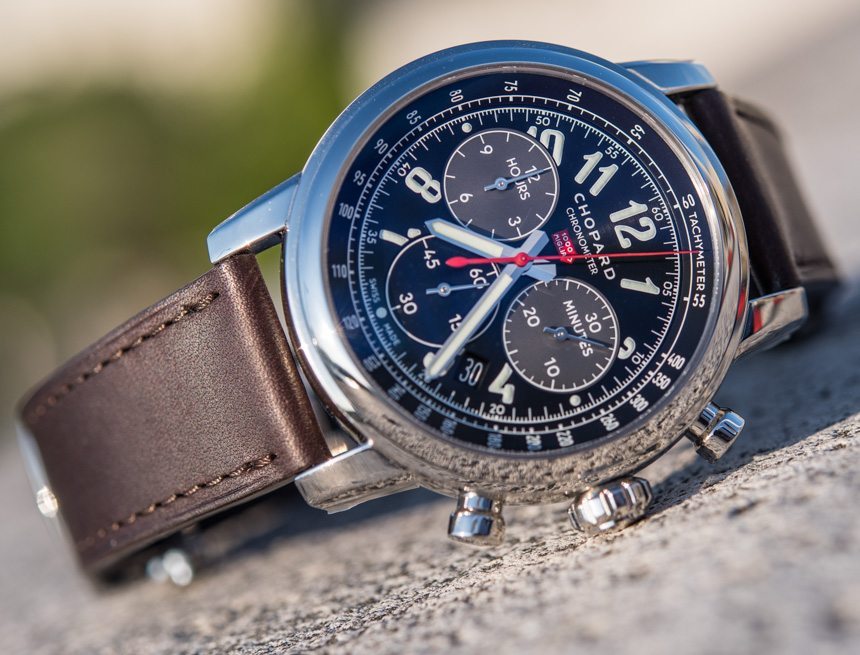 As large as this “2016 XL Race Edition” is, it remains proportionate and, hence, pleasing to the eye – and the wrist (if we can say such a thing). In fact, if you take a look from afar, because most all dial elements have been sufficiently enlarged to support the wider case, this Chopard Mille Miglia 2016 XL Race Edition looks a lot like a traditional chronograph that’s taken some 100 Octane fuel and been blown up by about 25%. 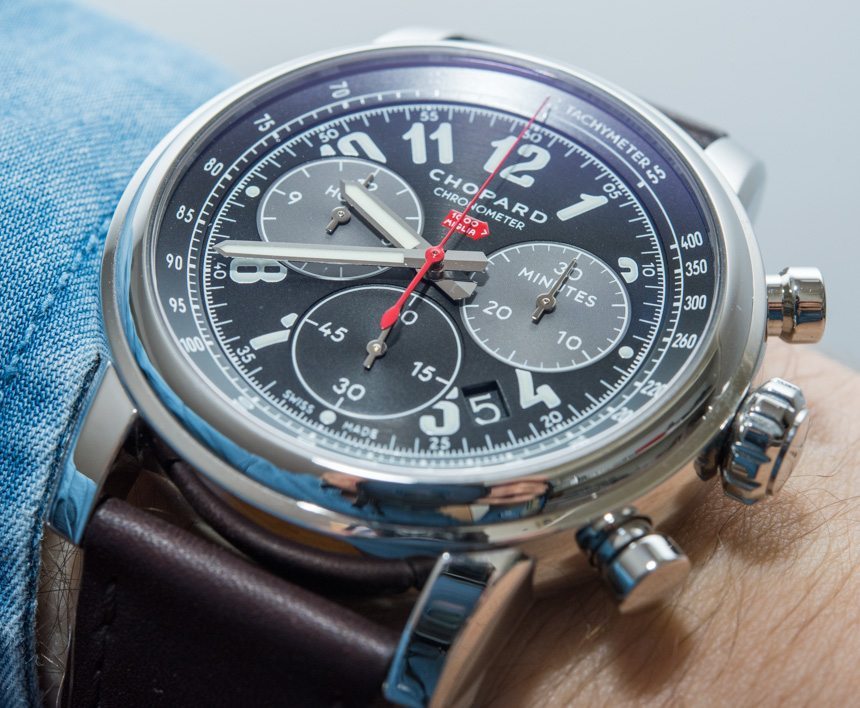 The sub-dials are not tragicomically close to one another, thanks to Chopard’s more recently designed movement (more on that in a bit), and no dial design element appears to be a leftover from 10 years ago, when they were making watches 4-6 millimeters smaller. A reliable sign of thoughtful and truly modern watch design is the sizing of the hands: here, they are unusually wide and long, indicating not only the time, but also how nice a large watch can look if it has properly sized hands. 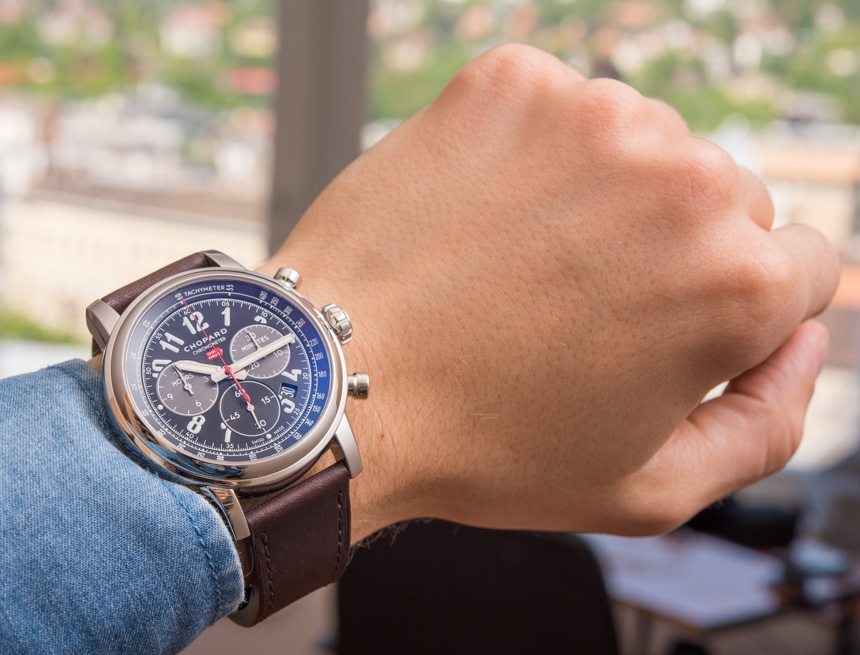 On my 6.75″ wrist, this 46-millimeter watch was about 2 millimeters larger than what I could best get away with; and yet, I have still ended up wearing it throughout the two or so weeks I have had it. I could adjust the strap to its tightest setting that allowed it to wrap around my wrist snugly – I know my wrists are of the thinner sort, but I still get frustrated when I can’t put a watch on because of its super long strap and lack of one extra punched hole in it. 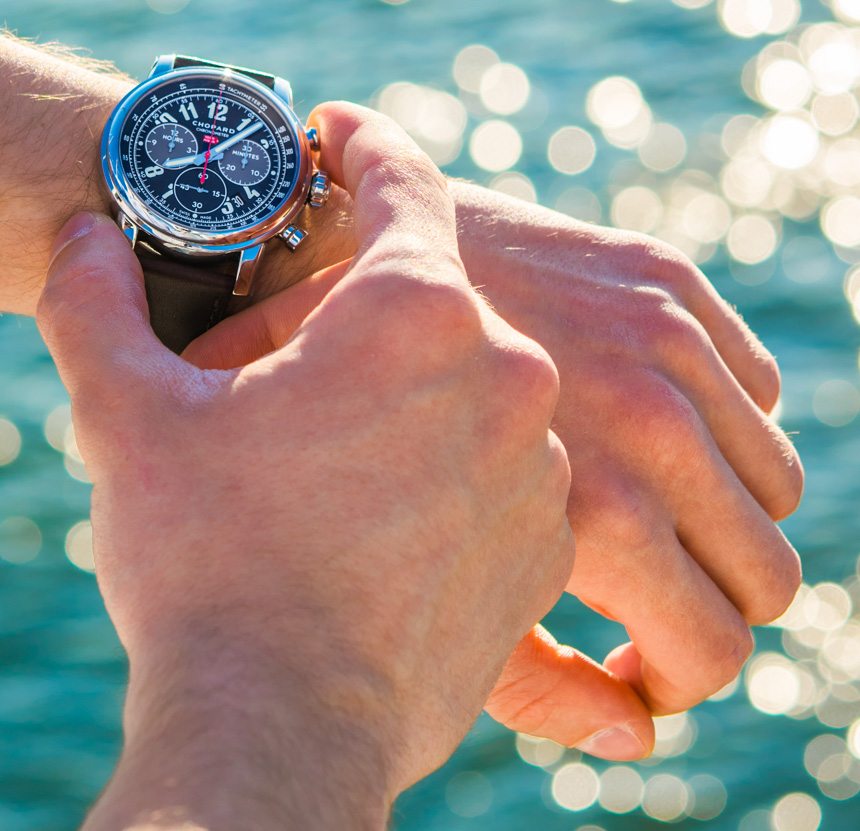 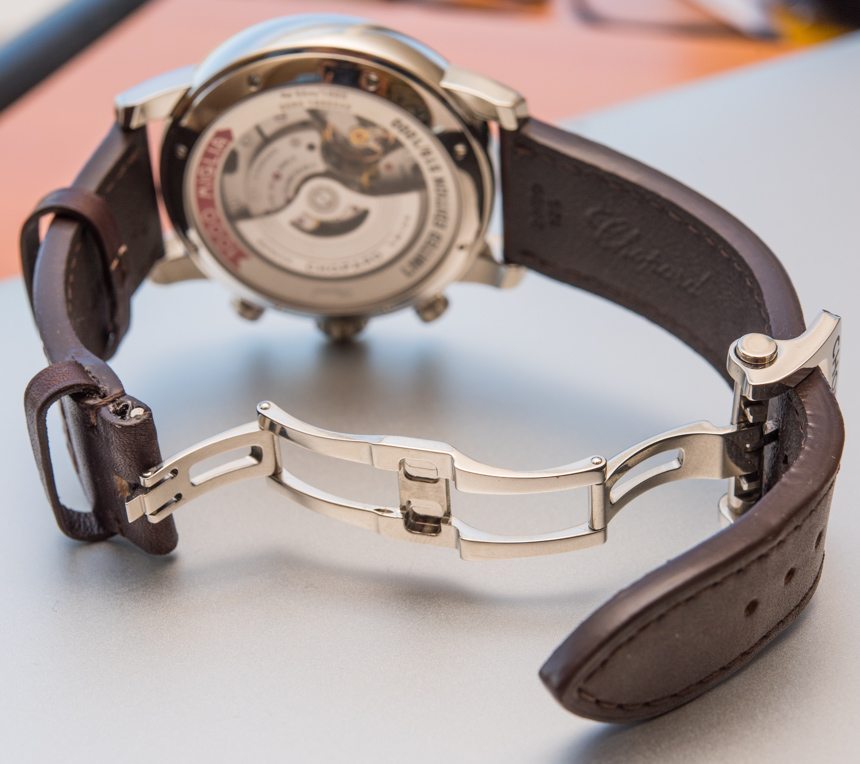 Speaking of the strap, it is one of the thickest straps ever fitted to a luxury watch – even by Panerai standards, it has some considerable heft to it. The extra thickness does not compromise comfort one bit, though, as the calfskin strap was flexible and soft out of the box, and took about a day for it to break in. The color choice is especially clever, as it falls somewhere between brown and burgundy, and that little hint of dark red makes all the difference in versatility – without compromising the more elegant and/or vintage mood of the brown. 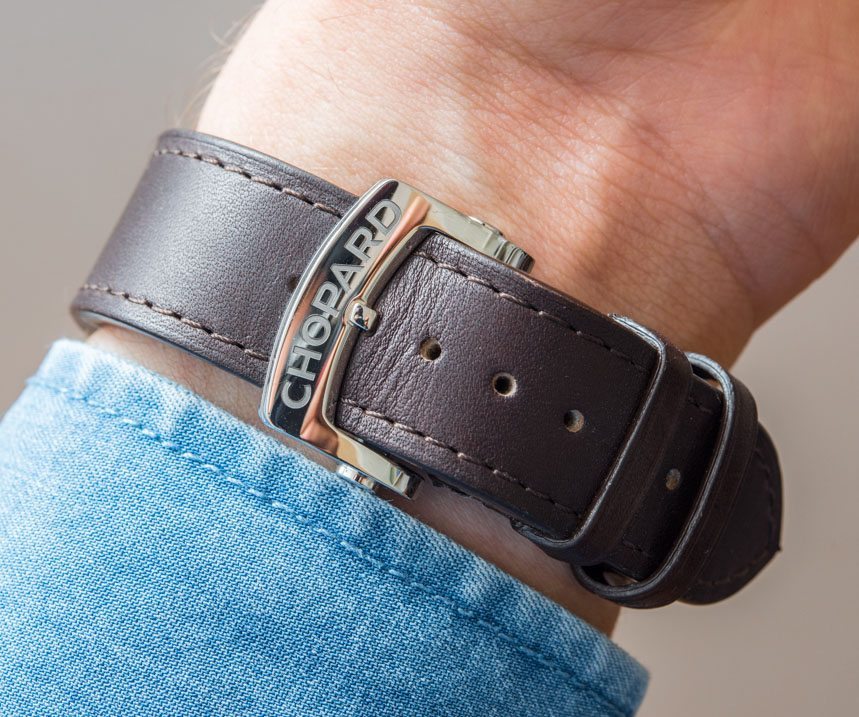 The double folding clasp is comfortable and utterly fails to reproduce any of the typical folding clasp annoyances, like ridiculously difficult adjustability or operation, barely functional pushers, or painful inner profile that digs into the wrist. Sometimes, I would much prefer an ordinary tang buckle to some of today’s fancy clasps, but Chopard did a good job on picking this one. 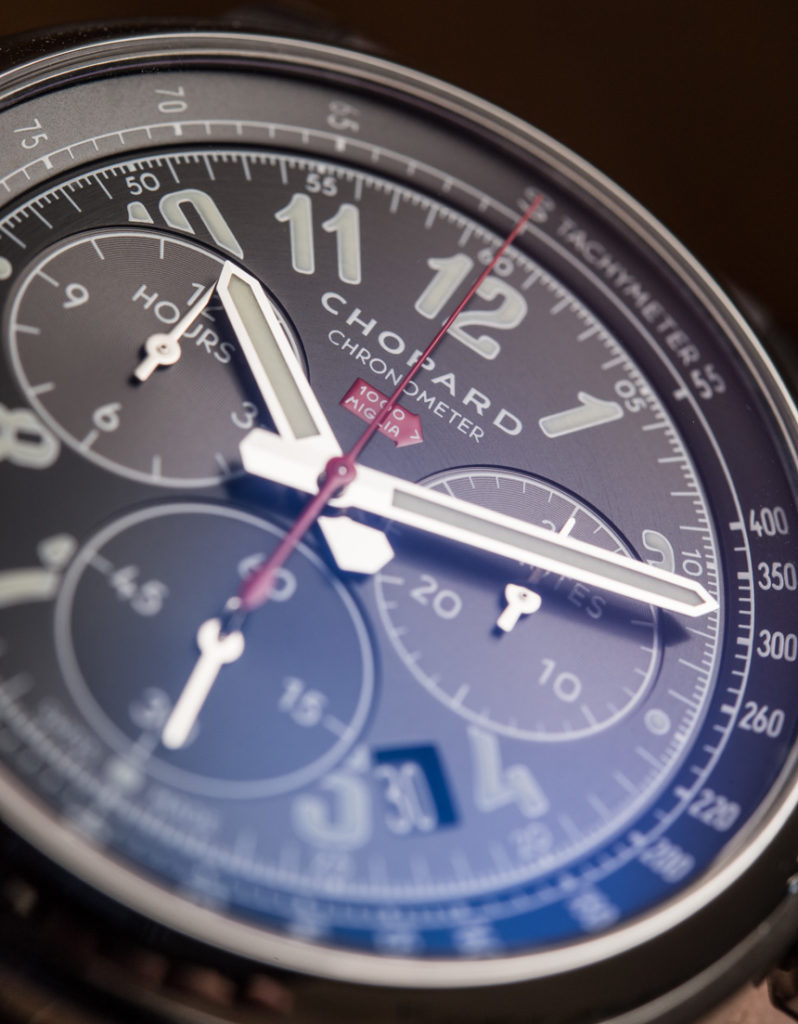 The hands we have already discussed briefly, but time now for a look at how the Chopard Mille Miglia 2016 XL Race Edition performs when it comes to legibility. The dial, like most “racing” chronographs, is rather busy, a sensation further enforced by the large Arabic numerals, some of which are overlapped by the sub-dials. A not entirely unusual total of three tiers frames the dial: on the flange ring, we have a tachymeter scale, thankfully executed in a rather small print that signifies its actual usefulness; on the edge of the dial itself, we find a seconds track, each notably split into 4 segments, which corresponds with the 4-Hertz frequency of the watch; while for the indices on the inside, we have the aforementioned, lume-filled Arabic numerals, with one smaller pip at the 3 and 9 o’clock positions.

Thanks to the shiny and still very large hour and minute hands, I never cared much about the lume on this piece – as long as there is any minimal amount of light, you will be able to quickly spot the hands. 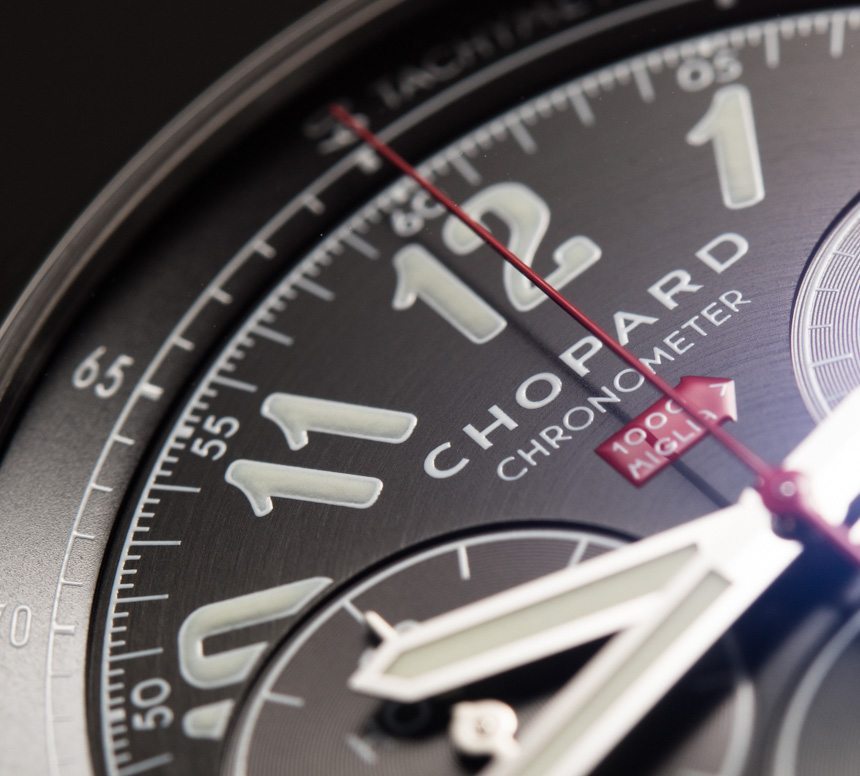 The dial itself has a scarcely visible, circular brushed finishing to it that helps elevate its already impressively high quality look. All the texts and numerals have been applied flawlessly, which is not out of the ordinary for watches in this segment – but a different sensation when done in such a blown-up size, on this wide canvas that is the large dial of the Chopard Mille Miglia 2016 XL Race Edition. 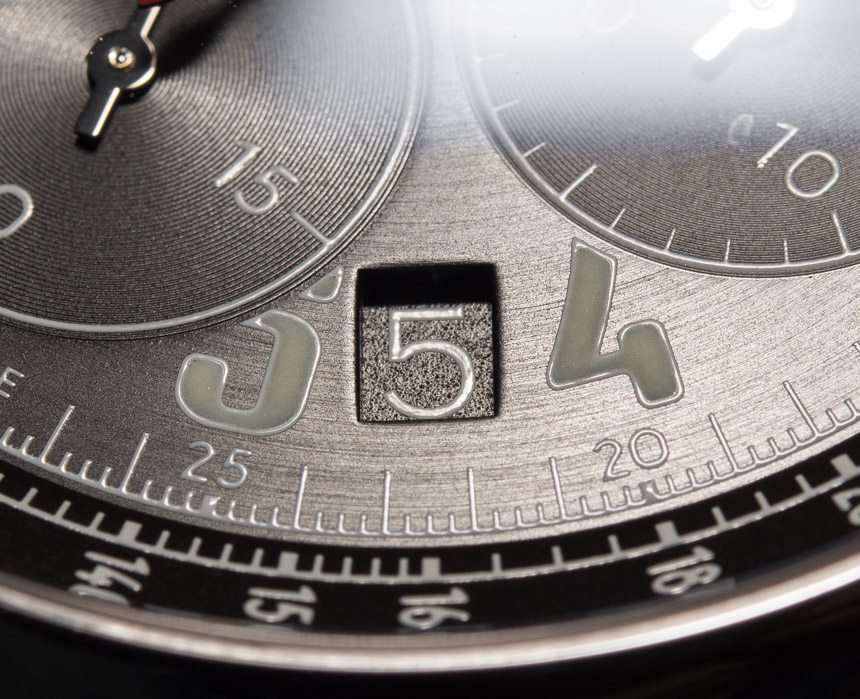 There is a date at 4:30 and, again, something rare among 46-millimeter watches: it is correctly positioned close to the edge of the dial, right where it should be, indicating an amply sized movement – if this had a 7750 (or any clone of that) inside, the date would fall much closer to the center of the dial. I’d even venture to say that Chopard has picked a bigger date disc to go with the larger cut-out of the dial – these little, thoughtful details above and under the surface can make all the difference.