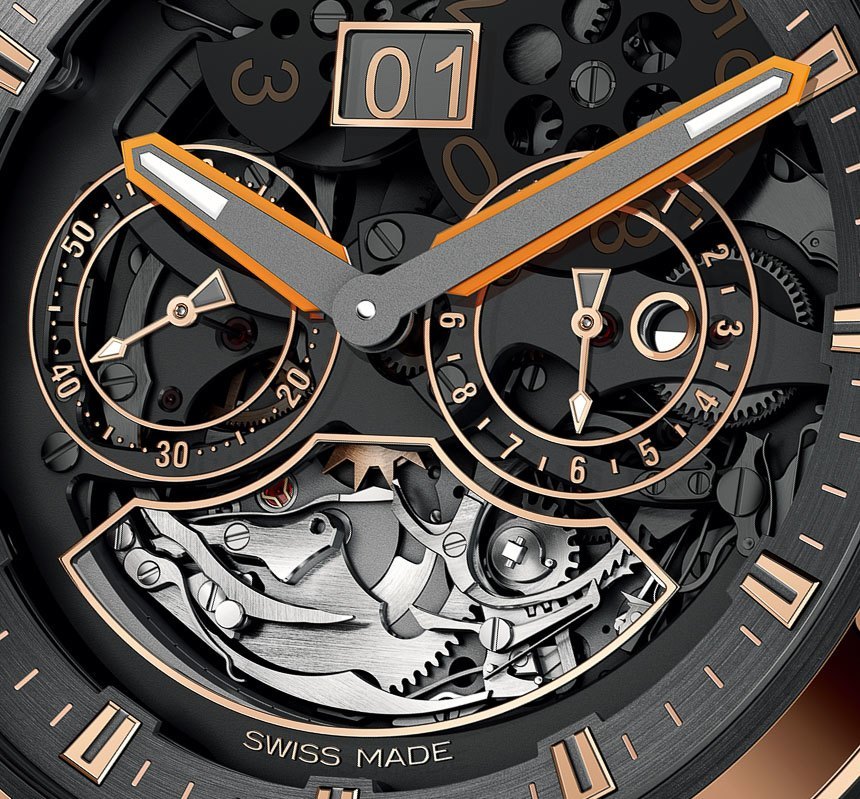 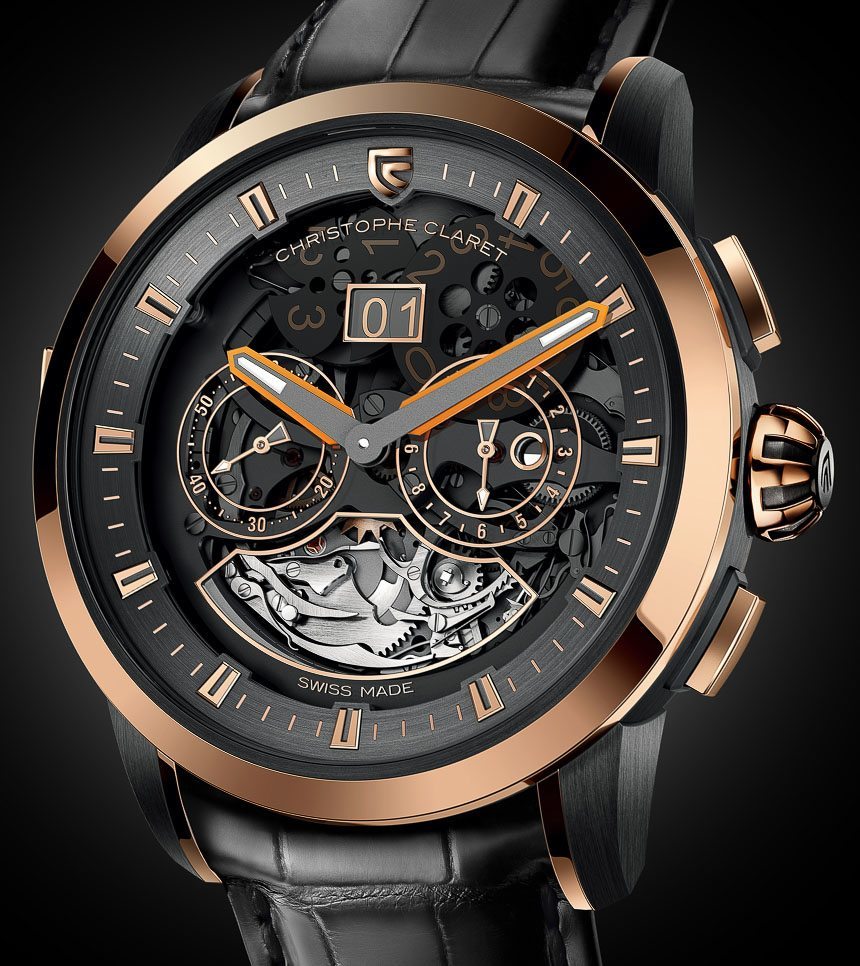 The flagship new watch by Christophe Claret for 2015 is the Allegro – the Swiss watch maker’s newest musical watch that combines a cathedral-style minute repeater with a second time zone indicator and a big date window. Is this the traveler-friendly minute repeater watch you’ve been waiting for? Once again with a “smiling dial,” Claret proposes a unique combination of complications for niche high-end watch collectors who will most appreciate some of Claret’s handiwork. 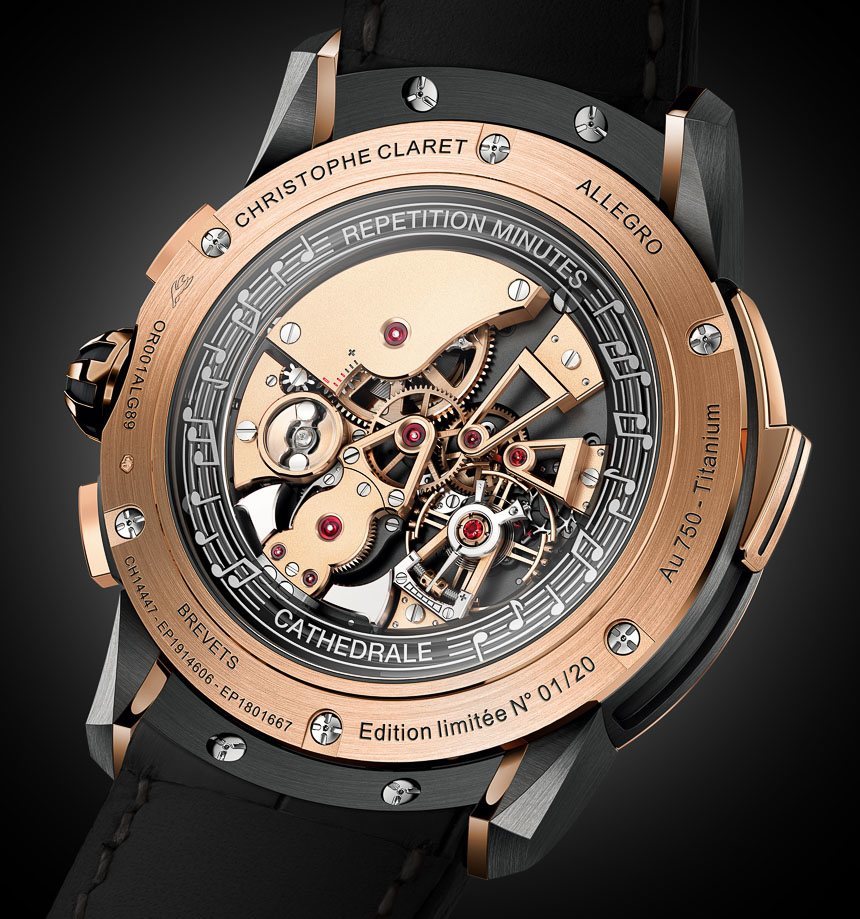 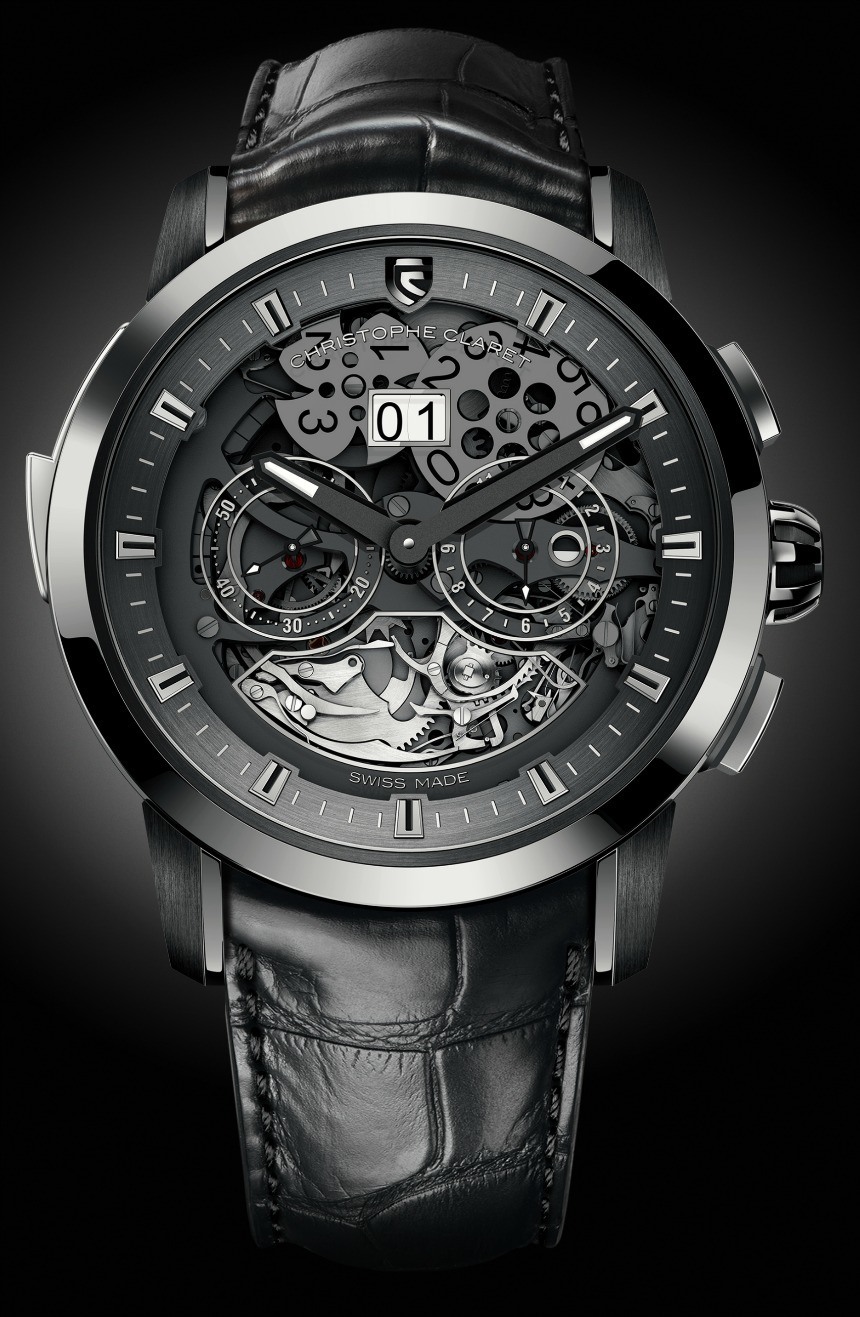 Mr. Claret knows something very important about his traditionally-themed yet modern timepieces… and that is the fact that, for many people, they are toys. Beautiful and intricate toys, yes, but at the end of the day, toys… and toys are meant to be played with and admired. Thus, for the Christophe Claret Allegro, they placed the principle mechanical elements of the minute repeater’s gear work on the dial side and made them plainly visible through a window on the dial of the movement. While the entire dial is technically skeletonized, most of it is smoked, save for the “mouth” at the bottom of the dial. The hammers and gongs of the minute repeater are placed on the rear of the watch.

There are a lot of interesting details to the movement for those who care (which I hope represents the majority of Claret’s customers). The Christophe Claret caliber ALG89 manually wound movement, apparently for the first time, contains important parts produced in-house that I believe were previously sourced. These include in-house made balance springs, anchors, and the balance wheel. These parts are rather rare to be in-house-made, actually (even among “real” movement manufacturers). The movement operates at 3Hz with 60 hours of power reserve. 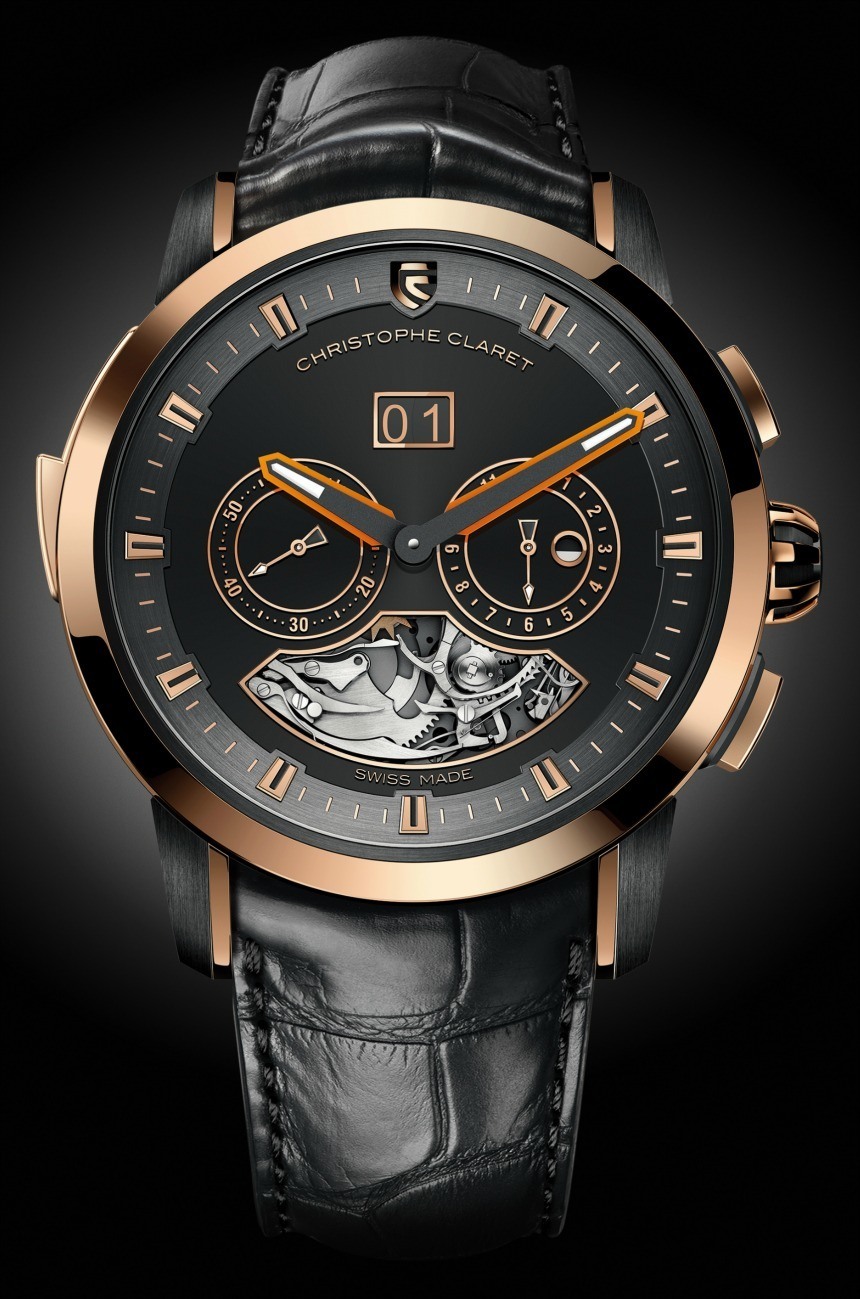 In order to improve the sound of the already impressive “cathedral minute repeater” produced in his manufacture, Christophe Claret added further refinements to the Christophe Claret Allegro movement. The brand isn’t terribly specific about it, but there is apparently a new regulation system for the minute repeater and attachment system of the steel gongs. Speaking of the gongs, did you know that, unlike most curved gongs that round the case one time, the gongs in the Christophe Claret Allegro are larger (making for a deeper sound) and round the case circumference twice? The minute repeater is activated using a traditional sliding lever located on the left side of the case.

Going back to the dial side of the Christophe Claret Allegro, we see see the rest of the movement’s complications. Under 12 o’clock is a big date window (the first time I’ve seen one in a Christophe Claret watch) along with two subdials. The left subdial operates as a subsidiary seconds dial, while the right subdial is a second time zone as represented by an additional hour hand going along a 12-hour scale. A small window in the second time zone dial operates as a day/night indicator, so that the wearer knows if it is AM or PM in the other time zone. The pushers on the side of the case adjacent to the crown either adjust the date or advance the second time zone hand by one hour. In total, the rather complicated movement inside of the Christophe Claret Allegro contains 520 parts (very complicated). 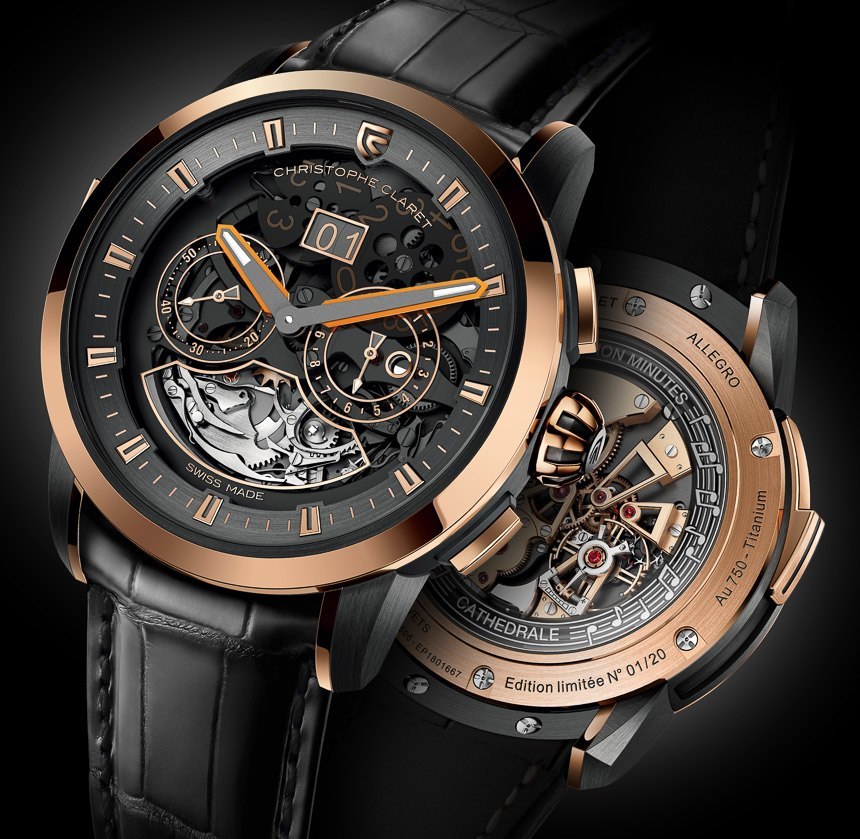 In terms of visual aesthetics, we see Christophe Claret once again returning to his favorite case design with corresponding elements like hands and hour markers. I feel that Mr. Claret believes this to be a signature element of his brand, which is why we see so little change in this department. The case design works nicely enough, but I feel that given the unexpected nature of what each of the brand’s new watches are, they could mix it up a bit with a range of designs that end up being iconic for the brand. I just don’t want Christophe Claret to be in a position where collectors feel in time that his movements are (too much) more interesting than the cases and dial designs. 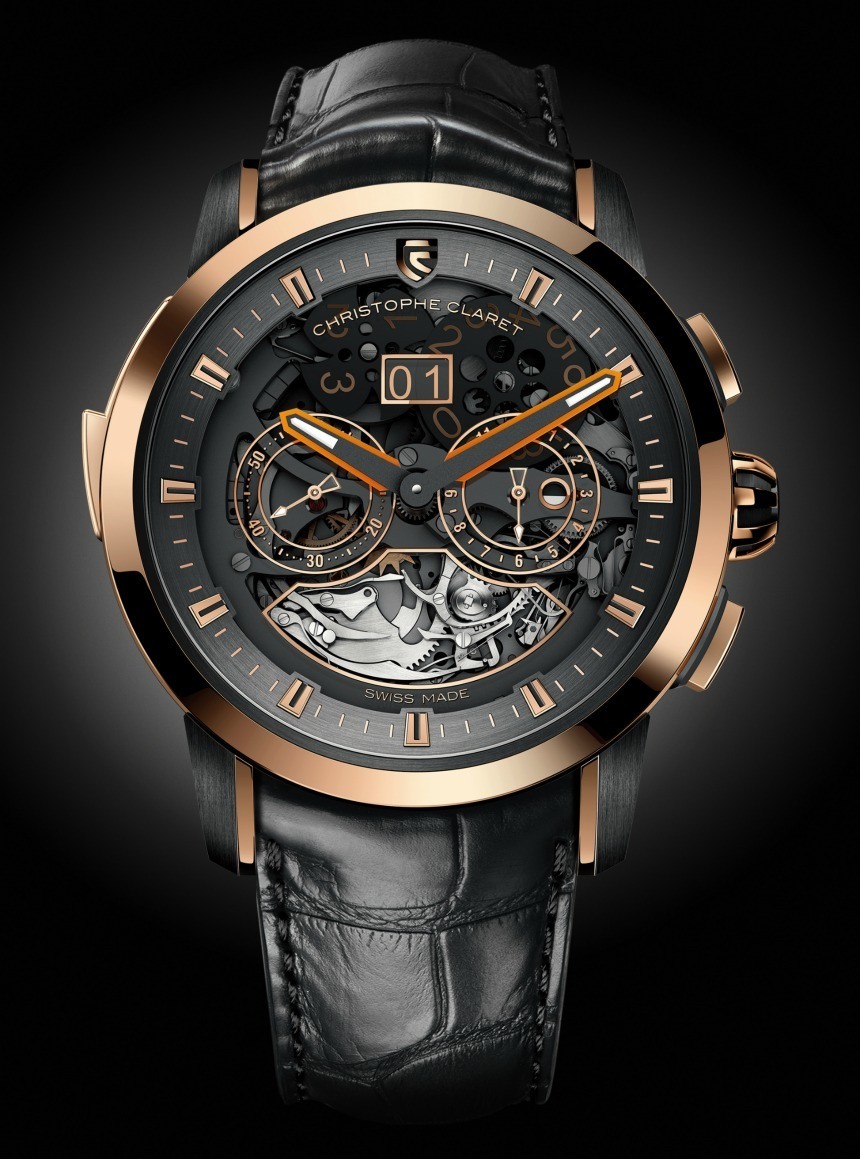 The Christophe Claret Allegro case is 45mm wide and 14.1mm thick (water resistant to just 30 meters). For 2015, there will be three limited edition models. Two will come in 18k red gold with titanium elements, and one will come in 18k white gold with titanium elements. Interestingly enough, one of the two red gold and the titanium models will be the same as the other but with a dial that is only skeletonized where the “open mouth” section is. This is the first time I’ve seen such a subtle difference between two different Christophe Claret watch models. Each of the limited edition versions of the Christophe Claret Allegro will be available as a set of 20 pieces (60 pieces total). Price for each is the same, at 268,000 Swiss Francs (roughly 200,000 Swiss Francs less than the Christophe Claret Soprano). christopheclaret.com