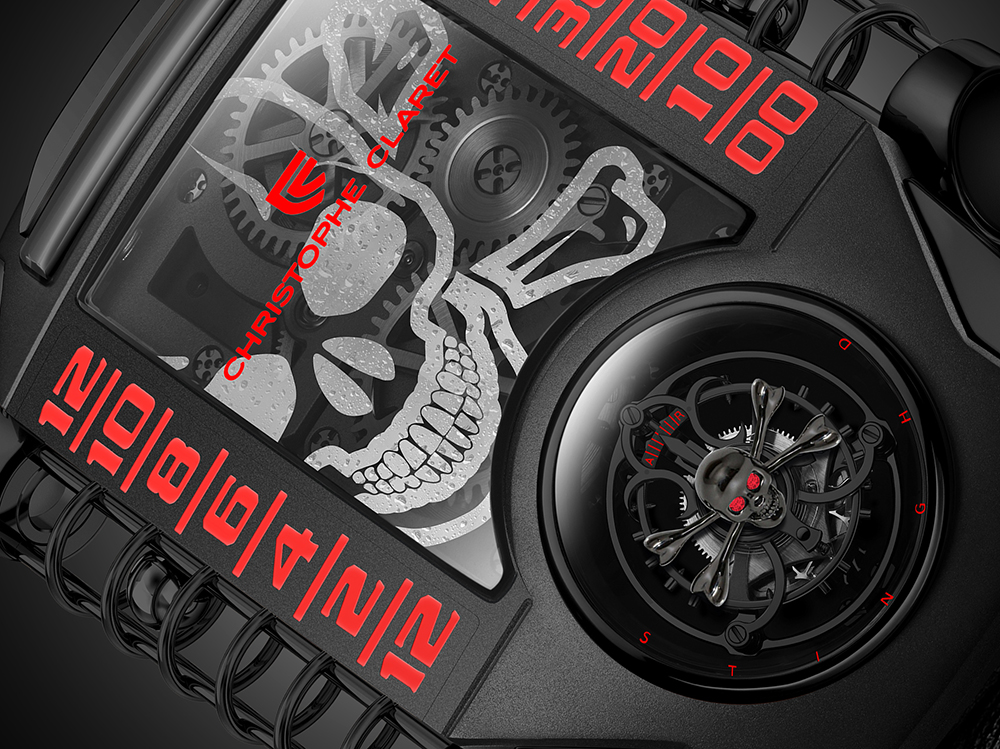 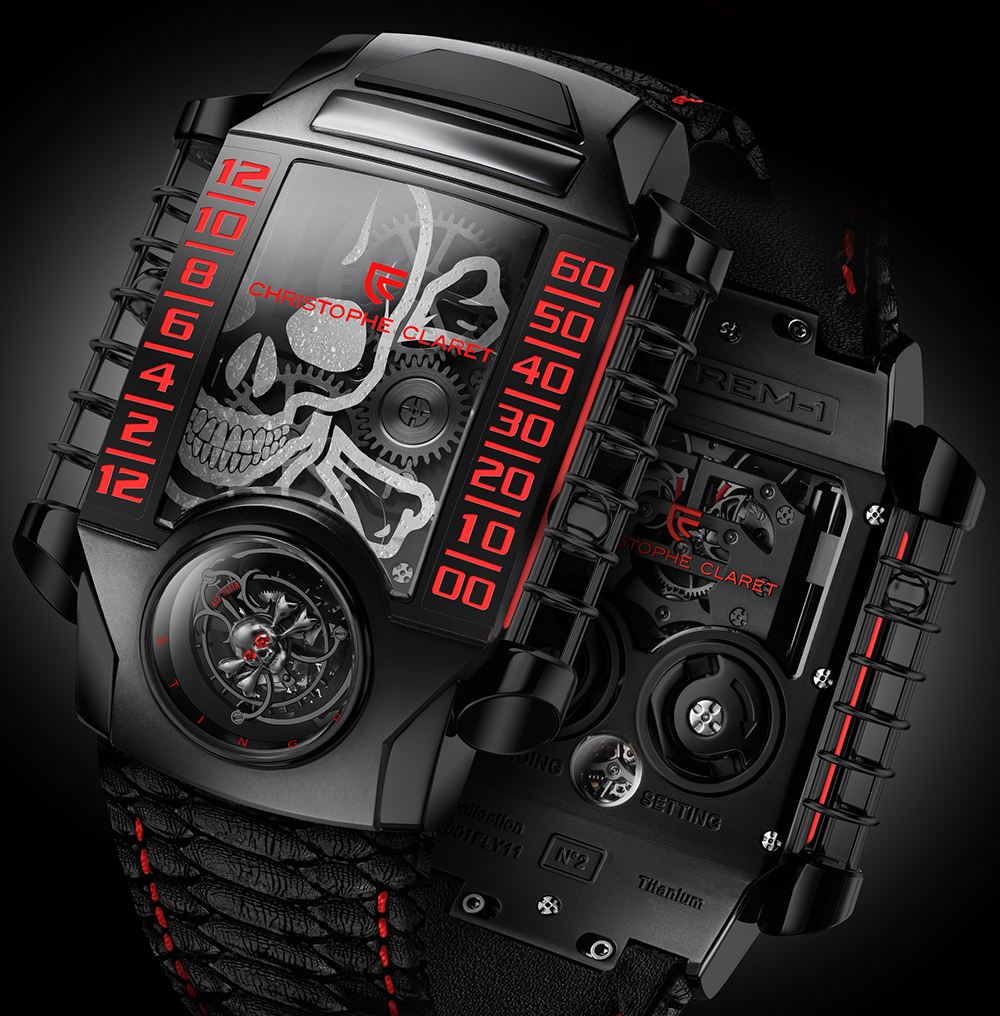 I still vividly remember the first time I read about the Christophe Claret X-TREM-1 – it was in a watch magazine in my hotel room in Taipei while on a work trip. And I thought to myself, what horological sorcery is this? Using magnets and balls to tell time? But that is exactly the kind of work and the kind of watch that independent watchmaker Christophe Claret is all about – watches that are innovative, technically impressive, and designed to evoke watch-lust. For 2017, Christophe Claret is revisiting the X-TREM-1 and is giving enthusiasts a new version of this creatively designed watch called the X-TREM-1 StingHD. 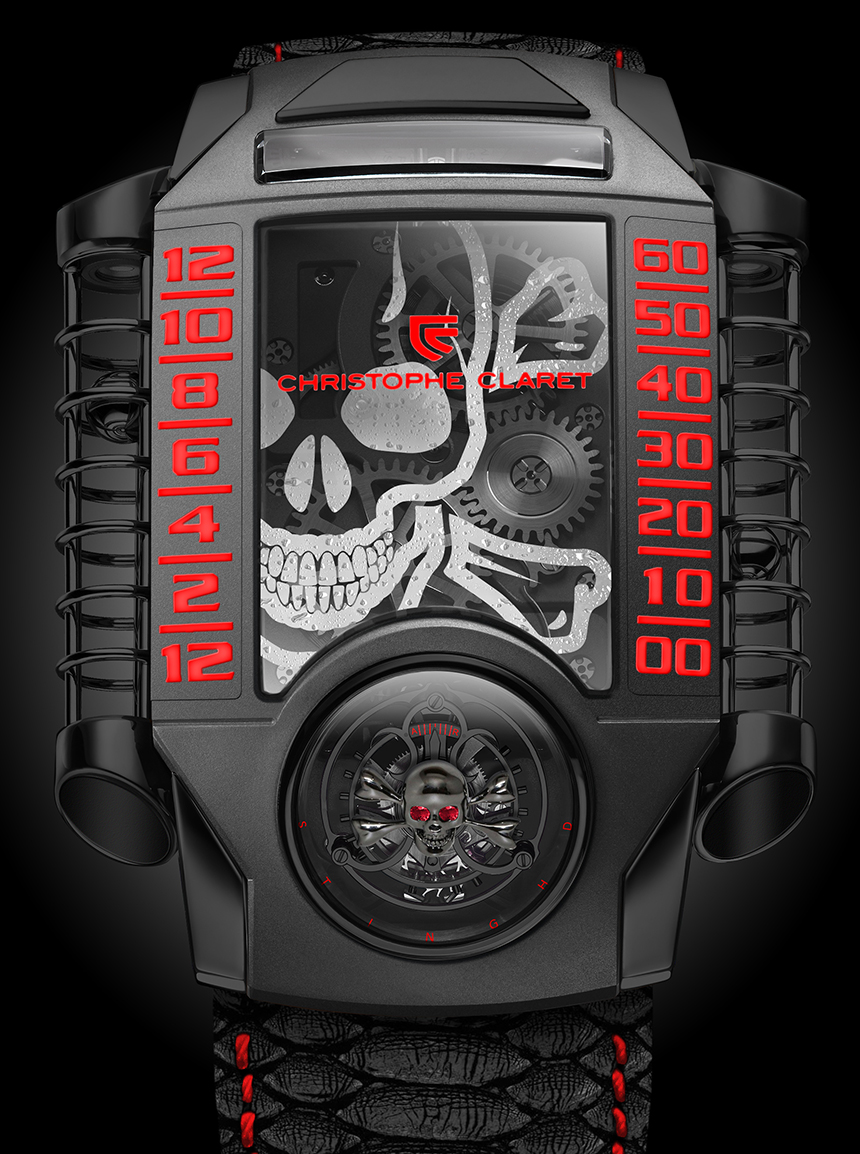 The new Christophe Claret X-TREM-1 StingHD was designed in collaboration with StingHD, a New York-based jewelry and accessories company known for making men’s bracelets with exotic leathers like stingray and python. They are also apparently known for their use of the skull motif. The watch keeps the key components that made the original X-TRME-1 so special. There’s an inclined flying tourbillon at 6 o’clock, which also displays the running seconds, and the retrograde hour and minutes displays are still shown using a series of belts, magnets, and two small steel balls. What has changed, however, are the overall aesthetics of the watch. 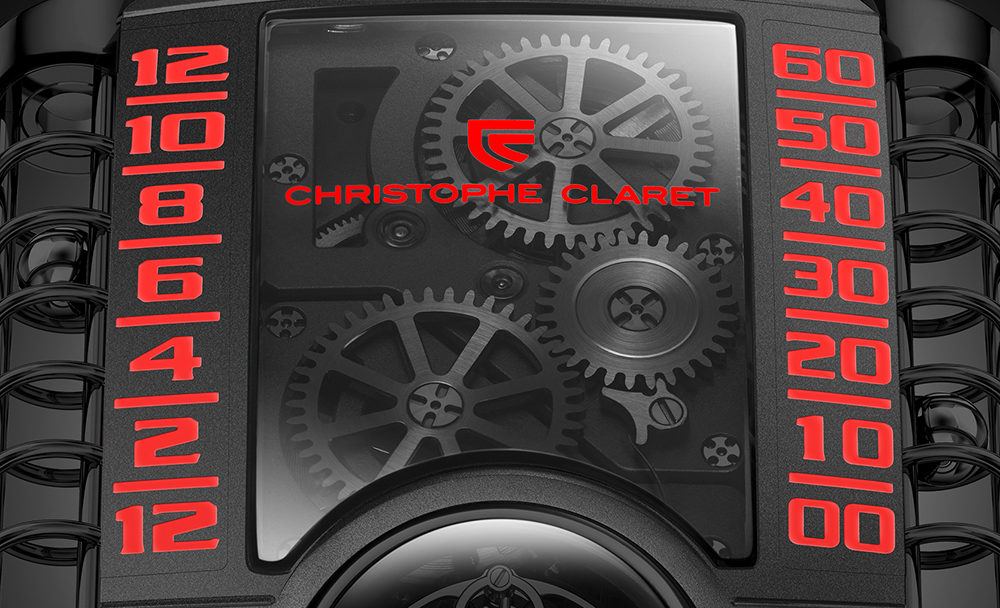 The Christophe Claret X-TREM-1 StingHD comes in a PVD-treated Grade 5 titanium case that measures 40.8mm across, 56.8mm tall, and rated water-resistant to 30m. Across the large sapphire crystal that covers much of the face of the watch is the brand’s name emblazoned in bright red. On the sides of the case, the hour and minute indicators are inscribed with red lacquer and feature red Super-LumiNova lines underneath to provide some nighttime legibility. 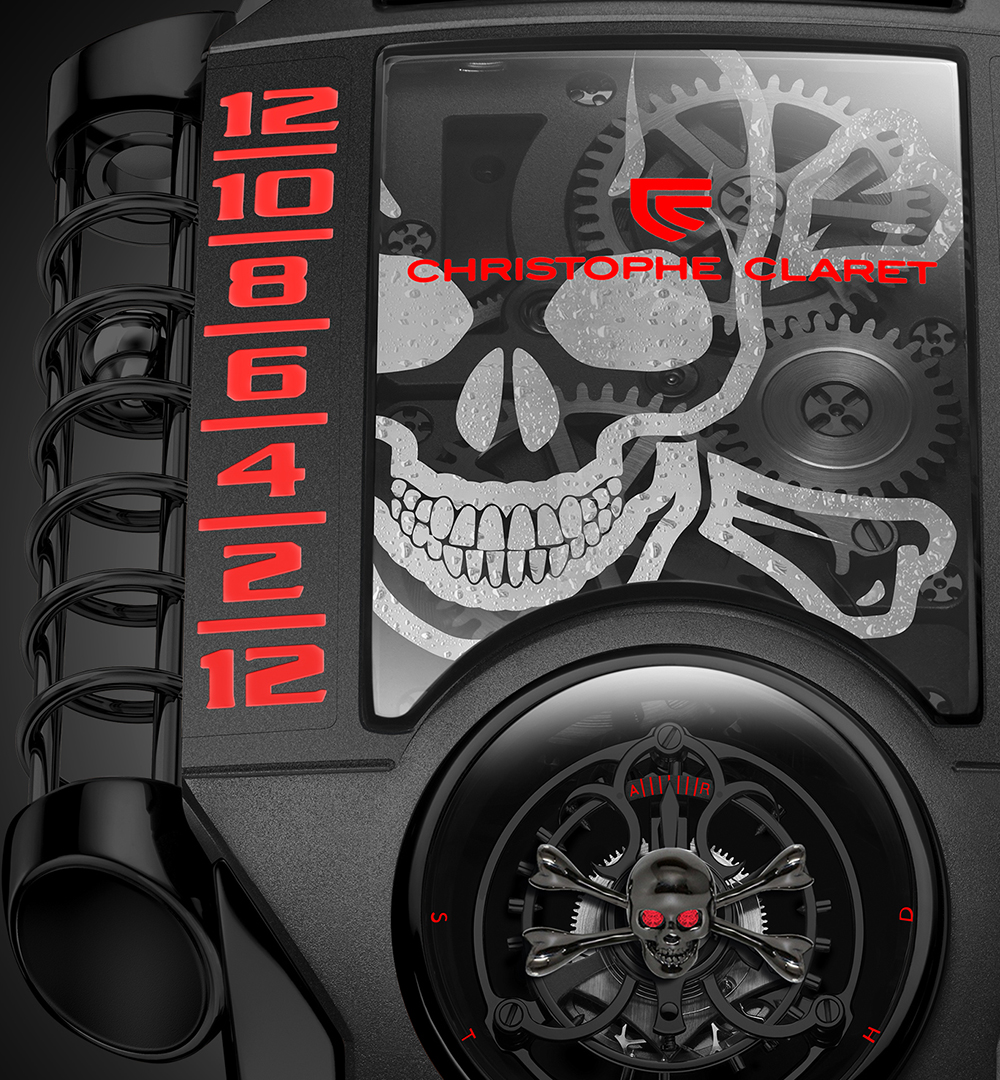 To match the case, the watch comes with a black stingray strap with red stitching. Owners will also get to personalize an additional strap. But that’s not all, in addition to the two straps, they will get another complimentary handcrafted bracelet that features a black diamond encrusted skull with ruby eyes. The straps and the handcrafted bracelet were both designed by StingHD. 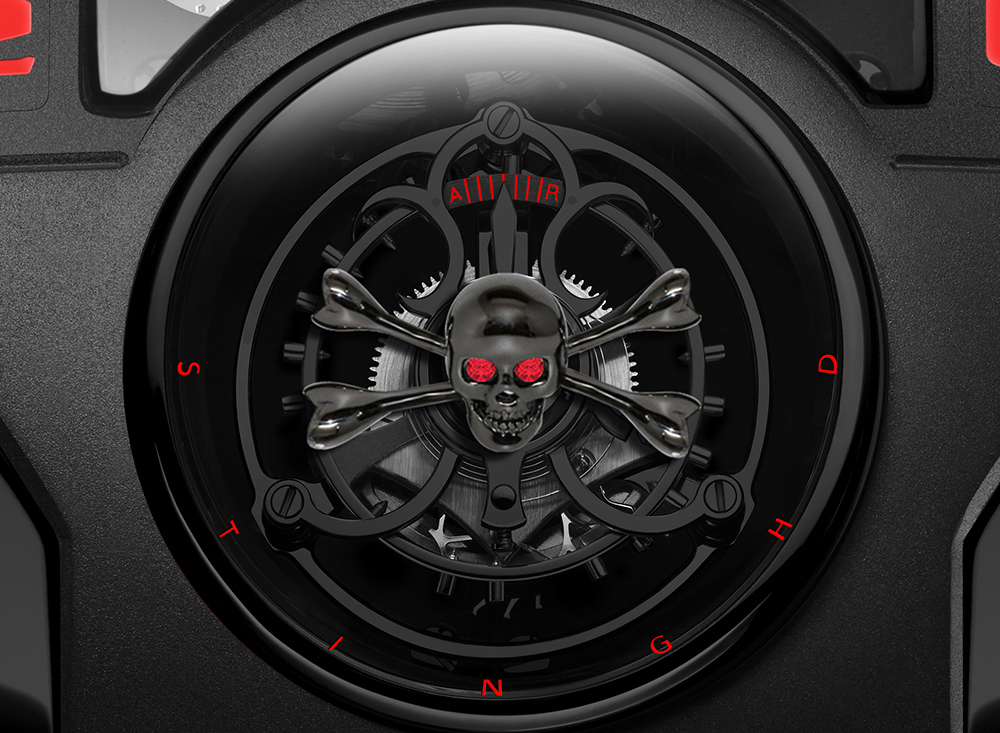 The skull treatment doesn’t end there. Look closely and you will see that the flying tourbillon at 6 o’clock has a new tourbillon cage that has been conceived by StingHD. The tourbillon cage has been redesigned to incorporate a black chrome-plated aluminum skull that is a signature of the brand’s jewelry. And as if that weren’t enough, the skull even features rubies for its eyes, which makes it look even more menacing. And around the periphery of the tourbillon is signed StingHD.

The movement within is Christophe Claret’s FLY11 caliber. It is a hand-wound movement that features over 432 components and uses two barrels, one for the movement gear train, and the other for the time indications. To match the rest of the watch, the movement in the X-TREM-1 StingHD has been given a matching black PVD finish. And considering the complexity of the movement, the power reserve is pretty decent at 50 hours.

But that’s not all – the Christophe Claret X-TREM-1 StingHD has yet another a trick up its sleeve. While the front-facing sapphire crystal gives owners unrestricted view of the movement within, breathing hot air onto it will cause a white skull to reveal itself. It is pretty gimmicky, but nonetheless, a very cool and playful feature that I’m sure owners will have lots of fun with. 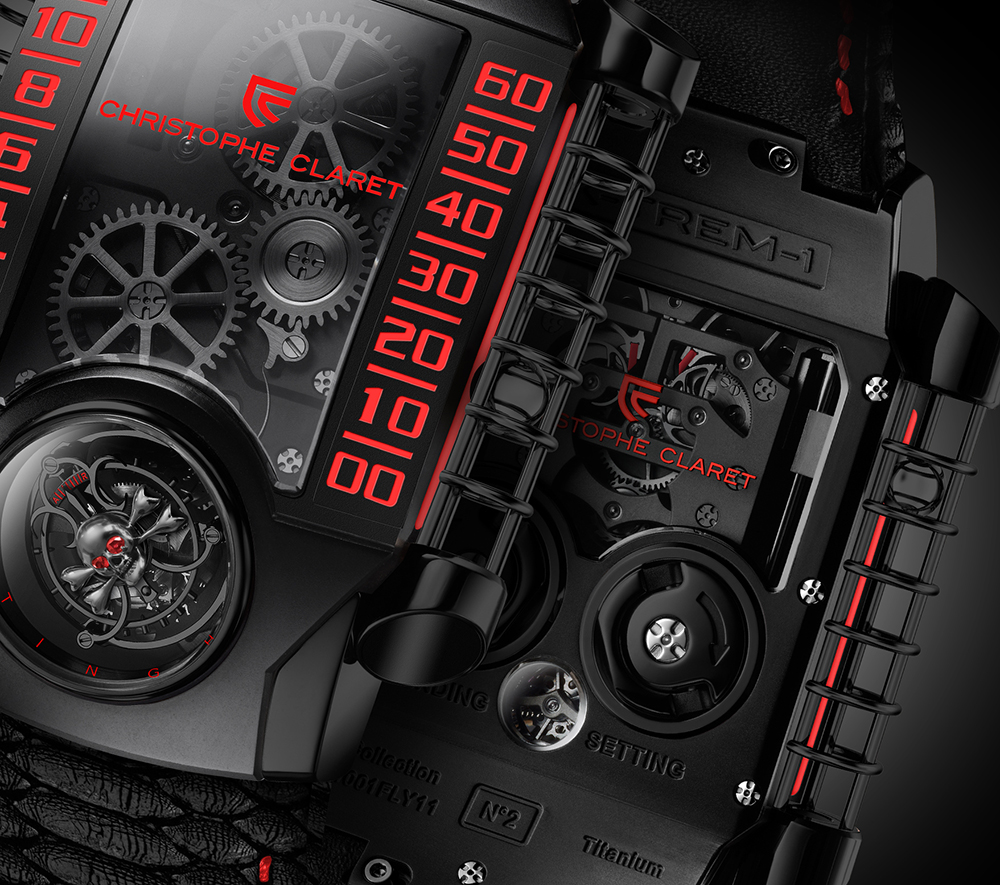 Clearly, because of the unique aesthetics of the Christophe Claret X-TREM-1 StingHD, this watch is not for everyone. But if you like a) black watches, b) skulls, c) something edgy, or d) all of the above, then this watch may be for you. Personally, I like it when watchmakers exhibit a sense of fun and humor, and this watch is certainly has a bit of a mischievous quality about it. The Christophe Claret X-TREM-1 StingHD is limited to just 8 pieces with a price of 278,000 CHF each. christopheclaret.com