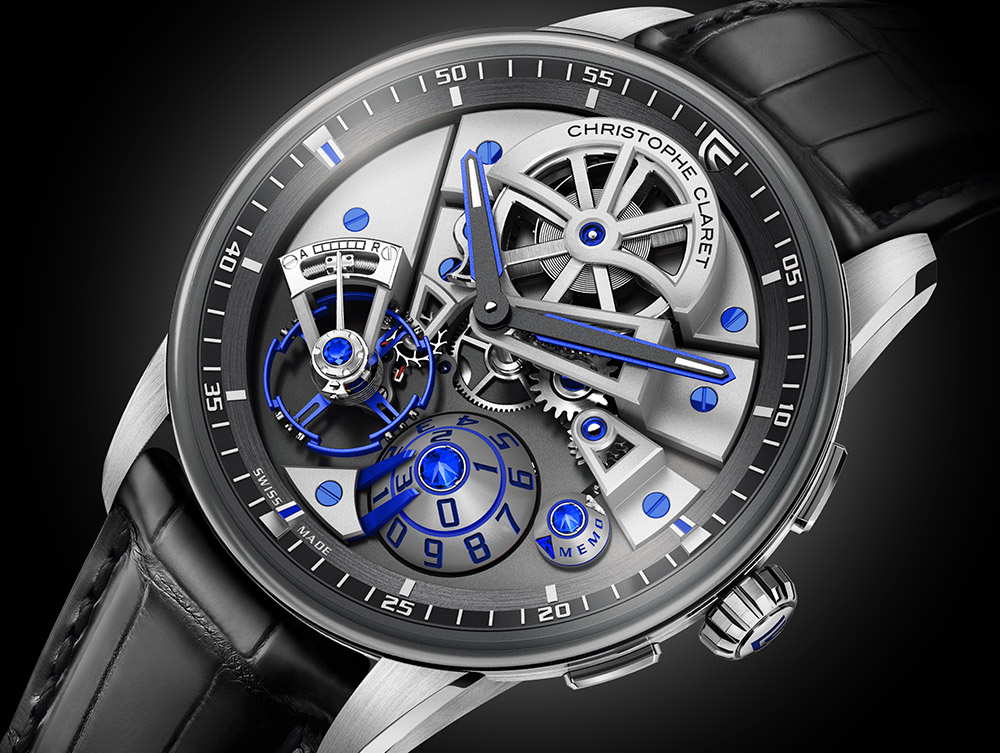 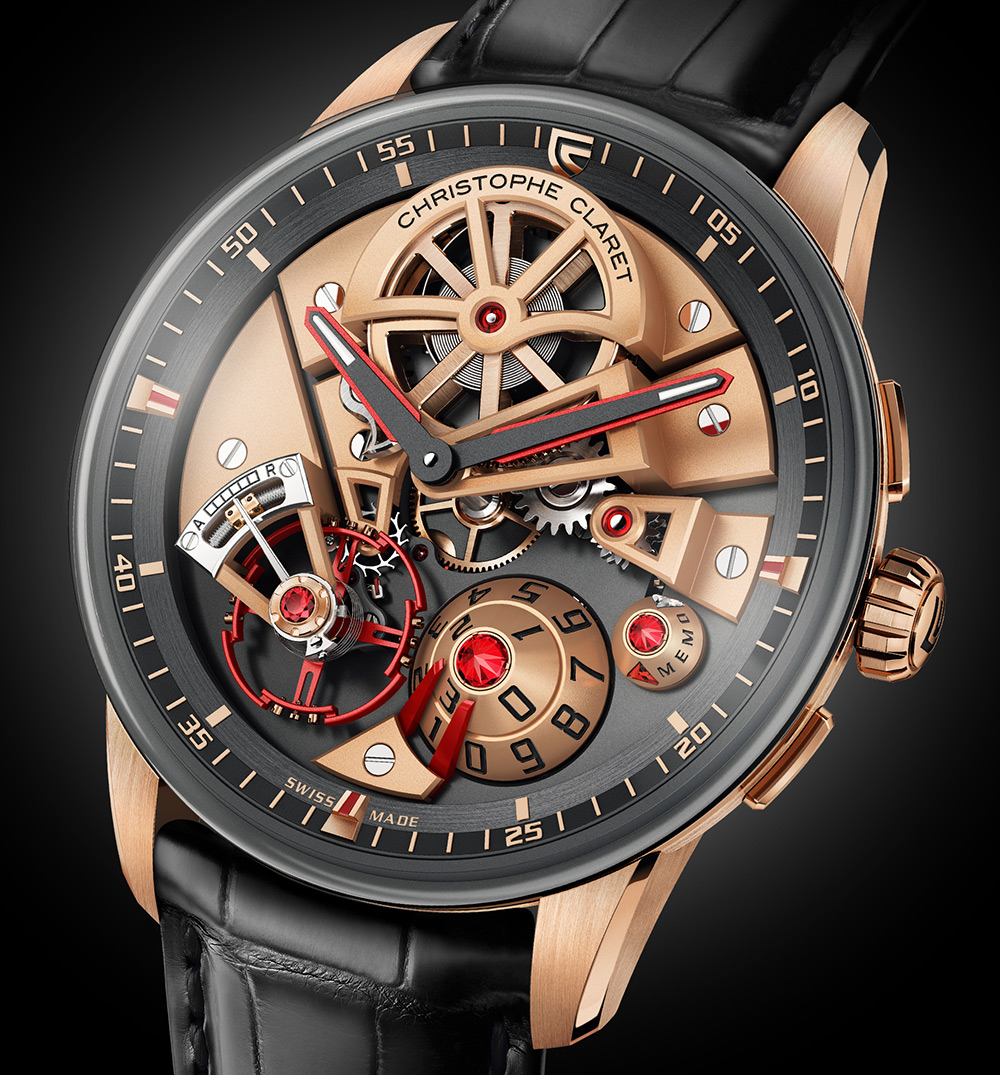 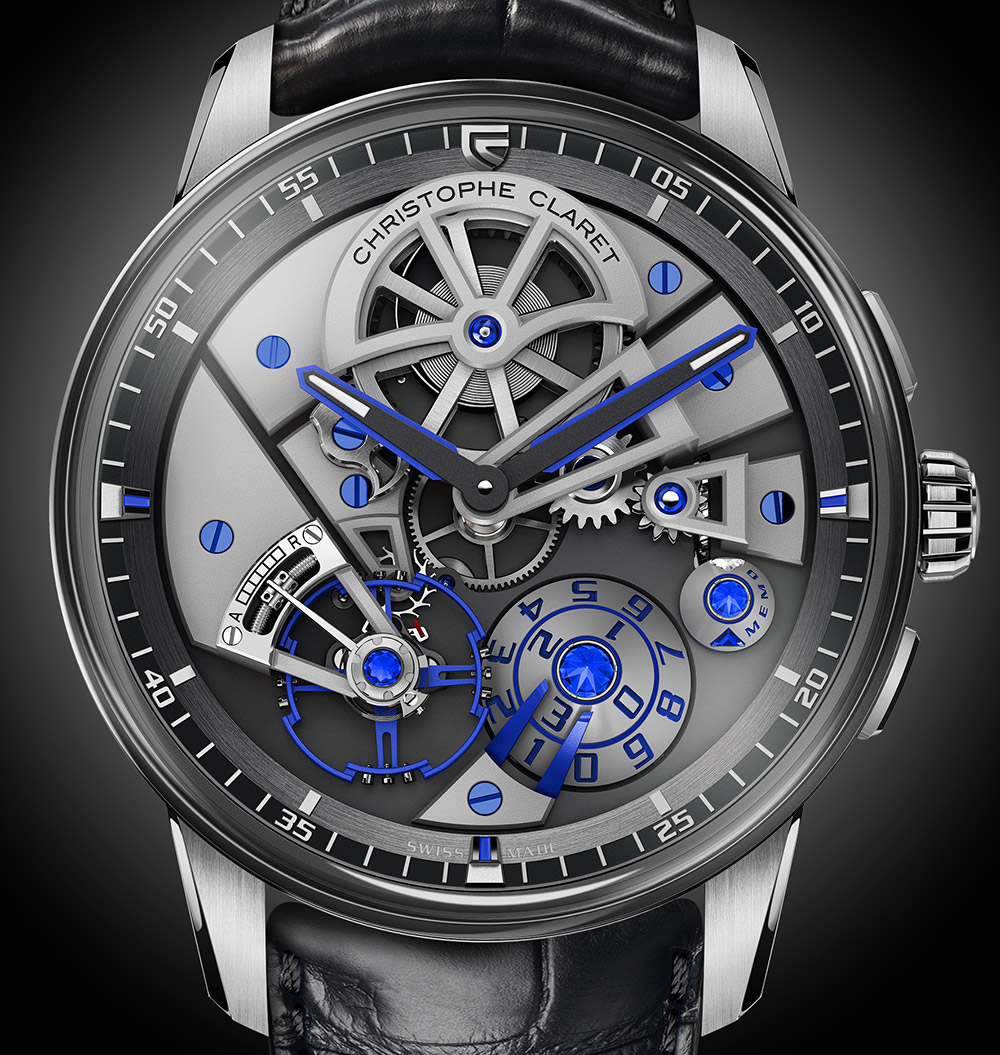 The Maestro watch will come in two variants – in a grade 5 titanium case or in a 5N pink gold case. Case diameter is 42mm, while the thickness measures about 16mm, which means the Christophe Claret Maestro has very sensible dimensions that are neither too bulky or too petite. Water resistance is just 30m, so wearers will have to be wary of their watches around water. Note that this is a smaller average case size than the roughly 44mm wide diameter of most round Christophe Claret watches that we’ve seen in the past. 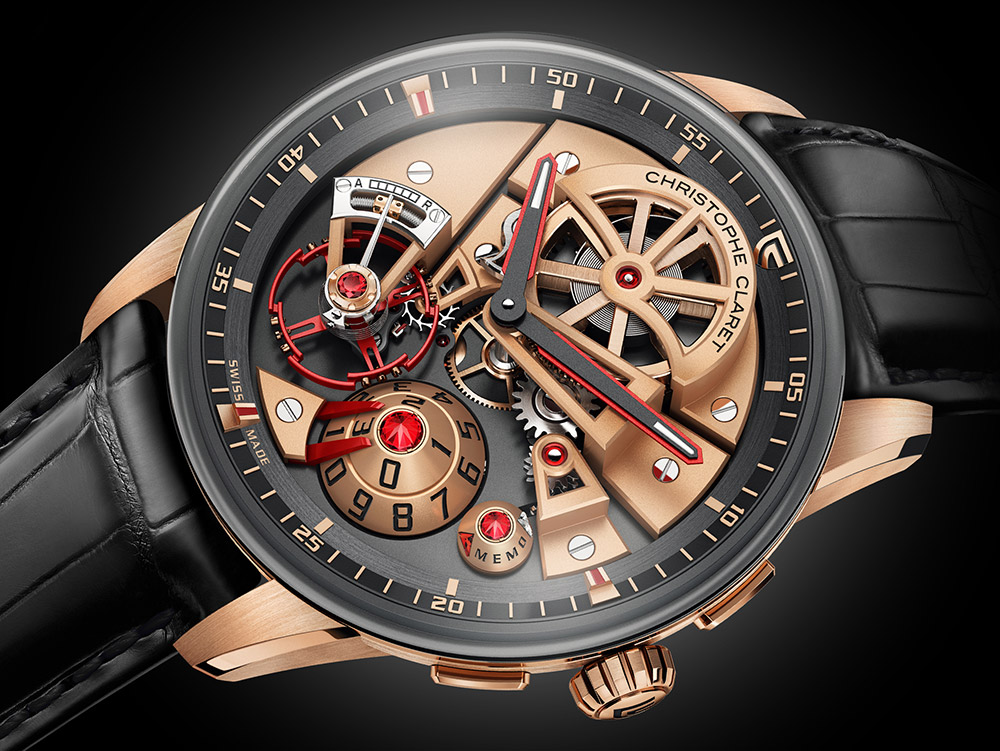 But what’s really eye-catching and unique about the Christophe Claret Maestro’s case design is the lack of a bezel. Instead, a large domed sapphire crystal extends from the edges of the case that accentuates the size of the skeletonized dial and makes it look larger than it actually is. That’s a good thing, however, because it better allows wearers to admire the inner mechanics of the movement within. 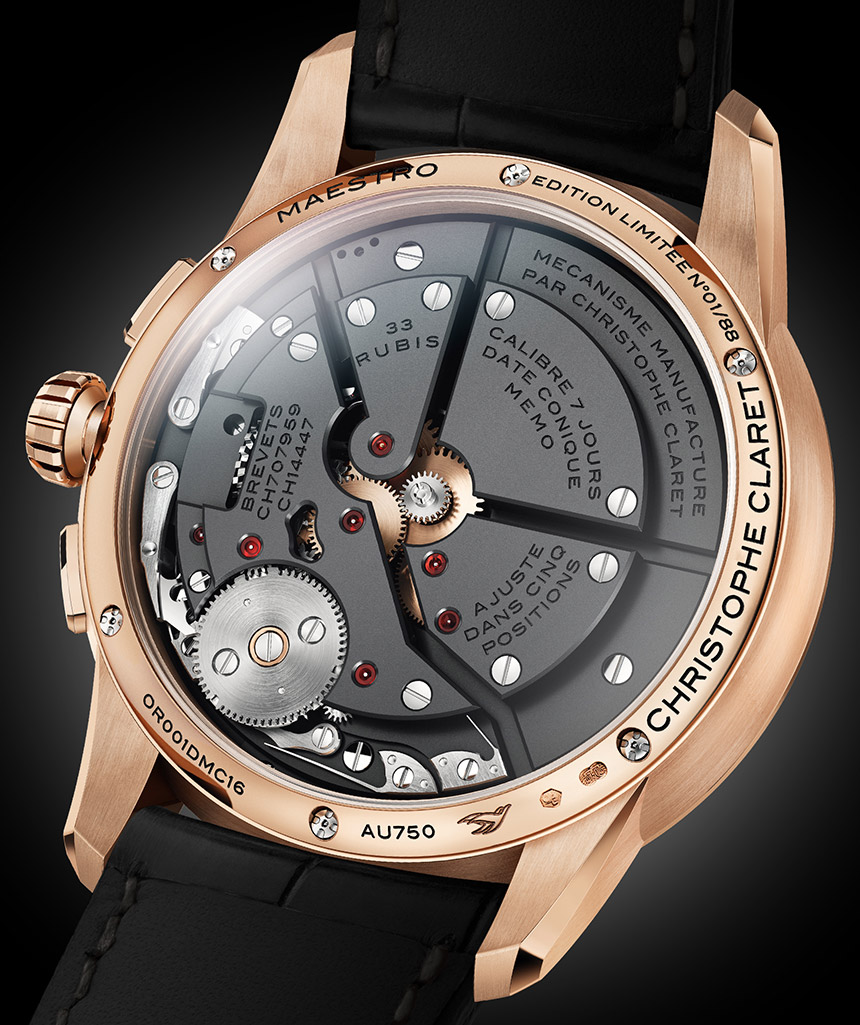 Powering the watch is the caliber DMC16, a hand-wound movement with 342 components and a power reserve of 168 hours, or seven days. On the dial, the skeletonized and stepped “Charles X style” bridges are immediately visible, which give the dial a great sense of depth. The bridges are constructed using the same materials as the case for a harmonious look and are masterfully beveled and finished. 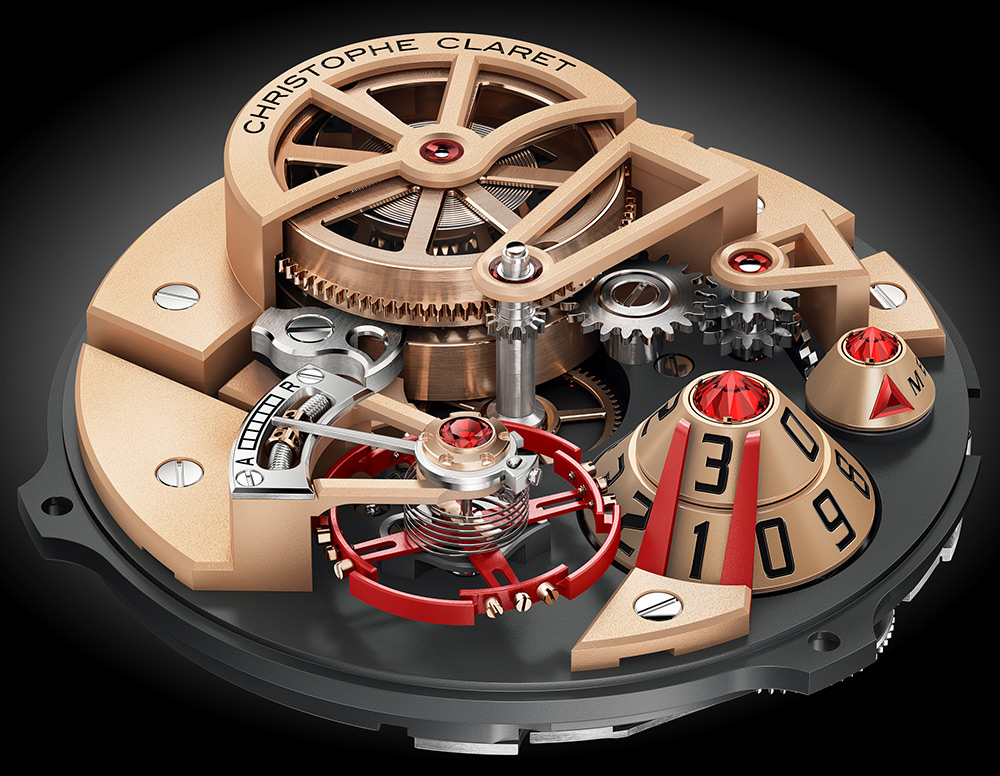 At 7 o’clock, there’s a large balance wheel with countersunk screws and a cylindrical balance-spring, all of which are developed and produced in-house. The DMC16 beats at a leisurely 3Hz, which makes it easier for wearers to appreciate the swinging motions of the balance wheel. An interesting detail is the single natural ruby or sapphire that is used in the assembly to conceal the shock-absorbing system. Ruby is used for the pink gold version of the Maestro, while sapphire is used for the titanium version. 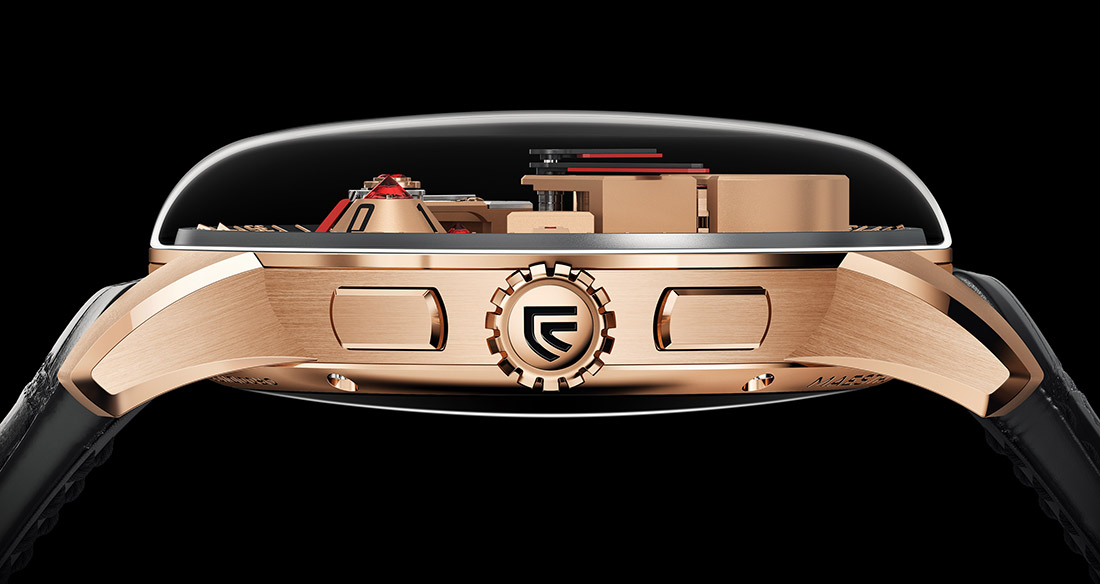 To the right, at the 5 o’clock position, is the Christophe Claret Maestro’s unique take on the date complication. In this watch, the date is shown using two conical aluminum discs, with the tens shown on the top disc and the ones on the bottom disc. And again, depending on the case material, the top of the cone is adorned with either a single natural ruby or natural sapphire. 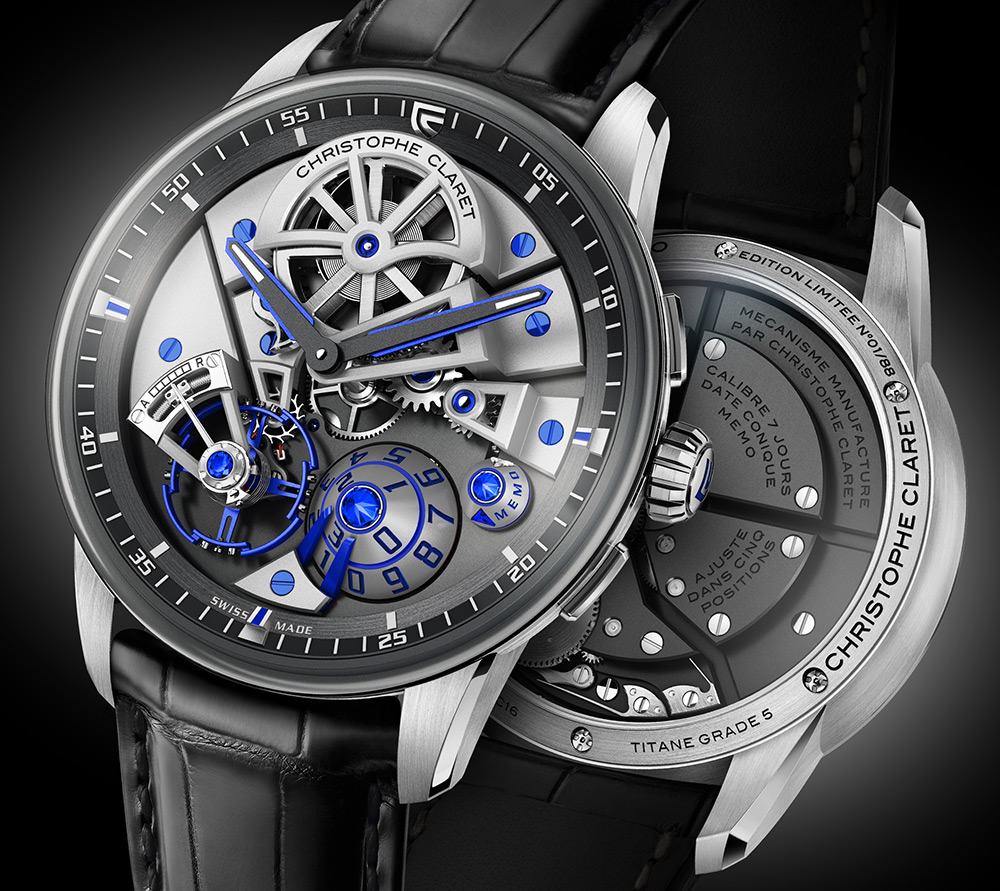 Finally, just above the date is a new complication that Christophe Claret calls the MEMO. It is a pretty practical complication that reminds wearers of things that he or she needs to do. It consists of another conical disc adorned also with either a single natural ruby or natural sapphire at the top and a triangular diamond in the middle. Once activated, the disc spins the diamond into view to remind wearers of whatever it is that they set out to do. Once the goal is met, the wearer can activate the pusher to reset the MEMO complication. 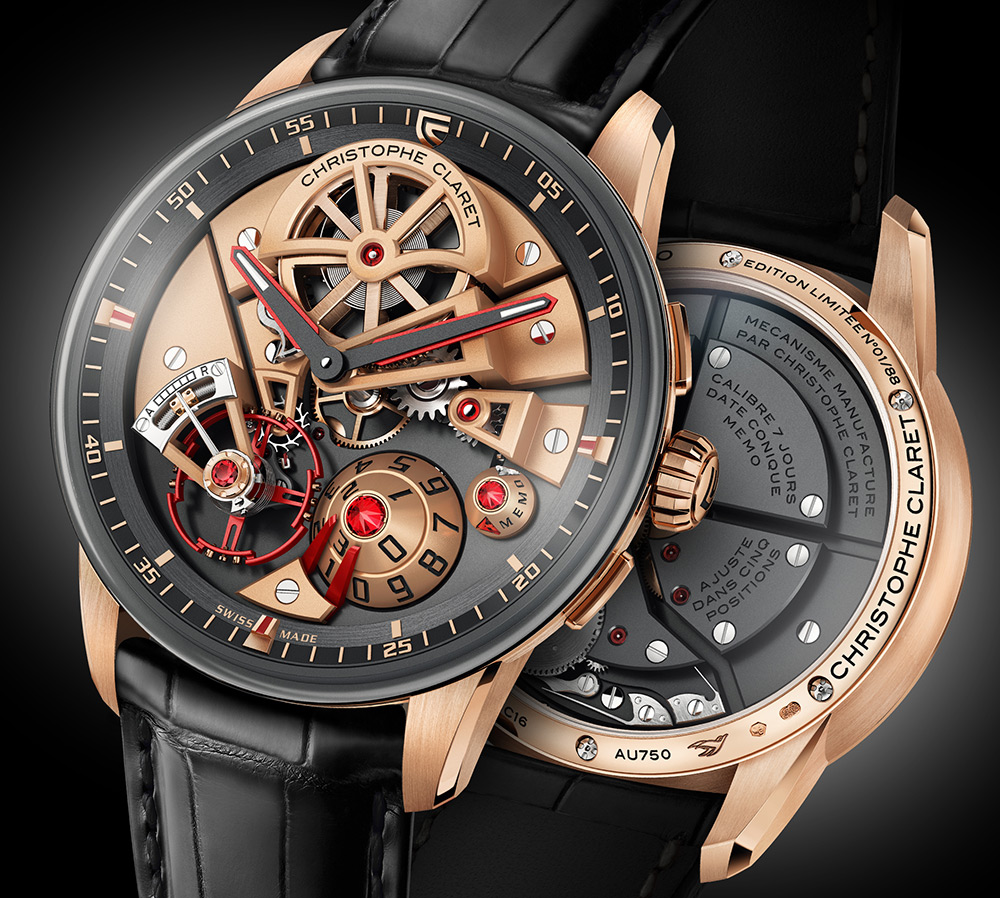