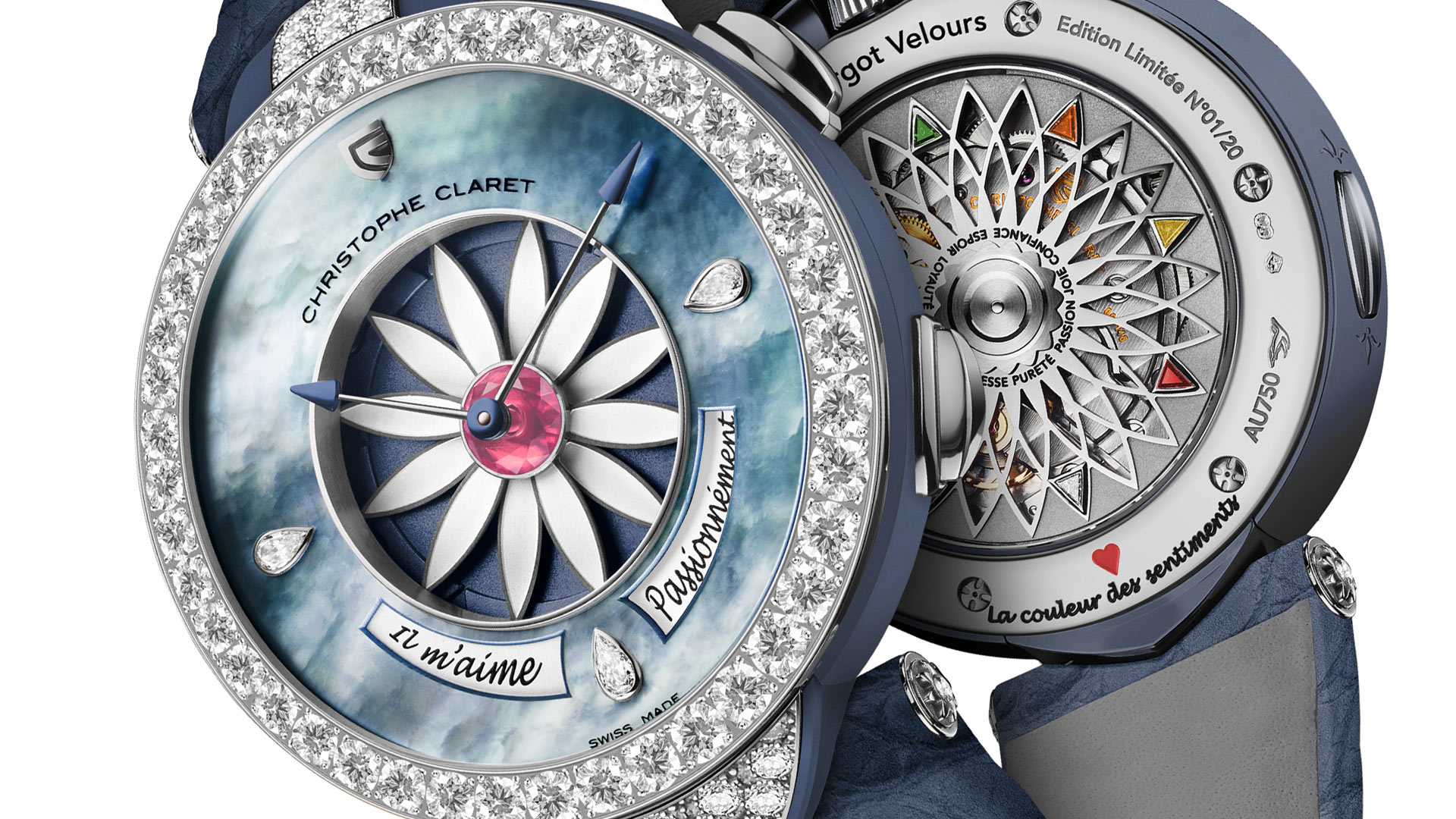 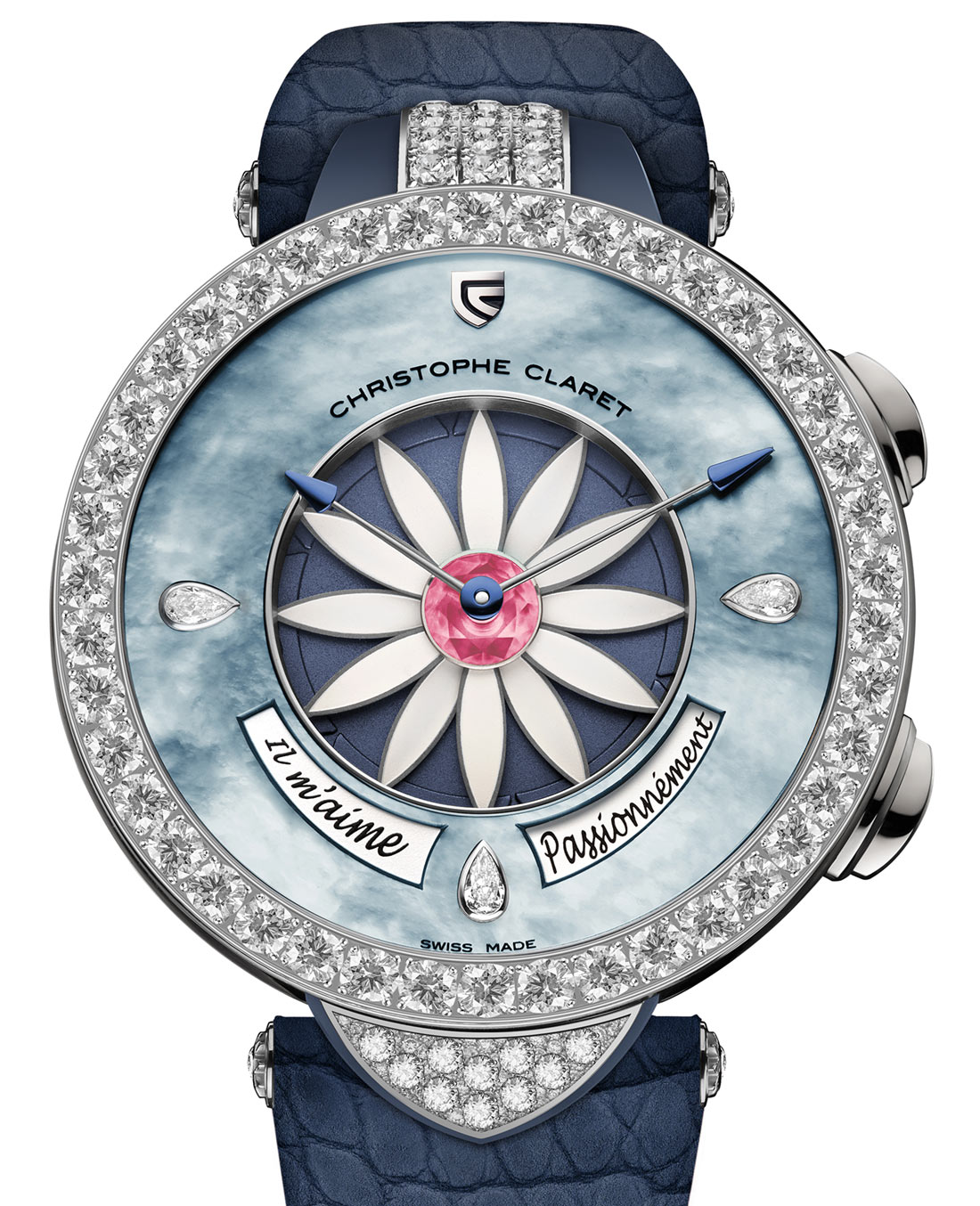 Watches dedicated specifically to women tend to get short shrift from the overwhelmingly male watch-loving community. Part of it is simply an interest in what we can envision on our own wrists. However, another part is that, more often than not, the ladies’ model of a watch is simply a shift in color palette or size, and perhaps the inclusion of some hearts or flowers on the dial, and a sprinkling of gems somewhere. In other words, a rather lazy approach in trying to appeal to women’s tastes. Well, while the Christophe Claret Margot Velours definitely features flowers and gems, this really is a rather interesting watch in its own right.

So, we’ll address the obvious with the Christophe Claret Margot Velours – it has a giant flower and a whole lot of diamonds. Sixty-four of them, to be precise. So, yes, we start off with something that seems to follow the same (bad) stereotypes of the women’s watches that preceded it. On the other hand, measurements of 42.5mm wide and 14.5mm thick in white gold make the Christophe Claret Margot Velours unusually large for a ladies’ watch. Yes, the diamonds are gratuitous, but maybe that’s just me not being all that into the sparkle. It certainly draws the eye in, however, and then you notice that dial. 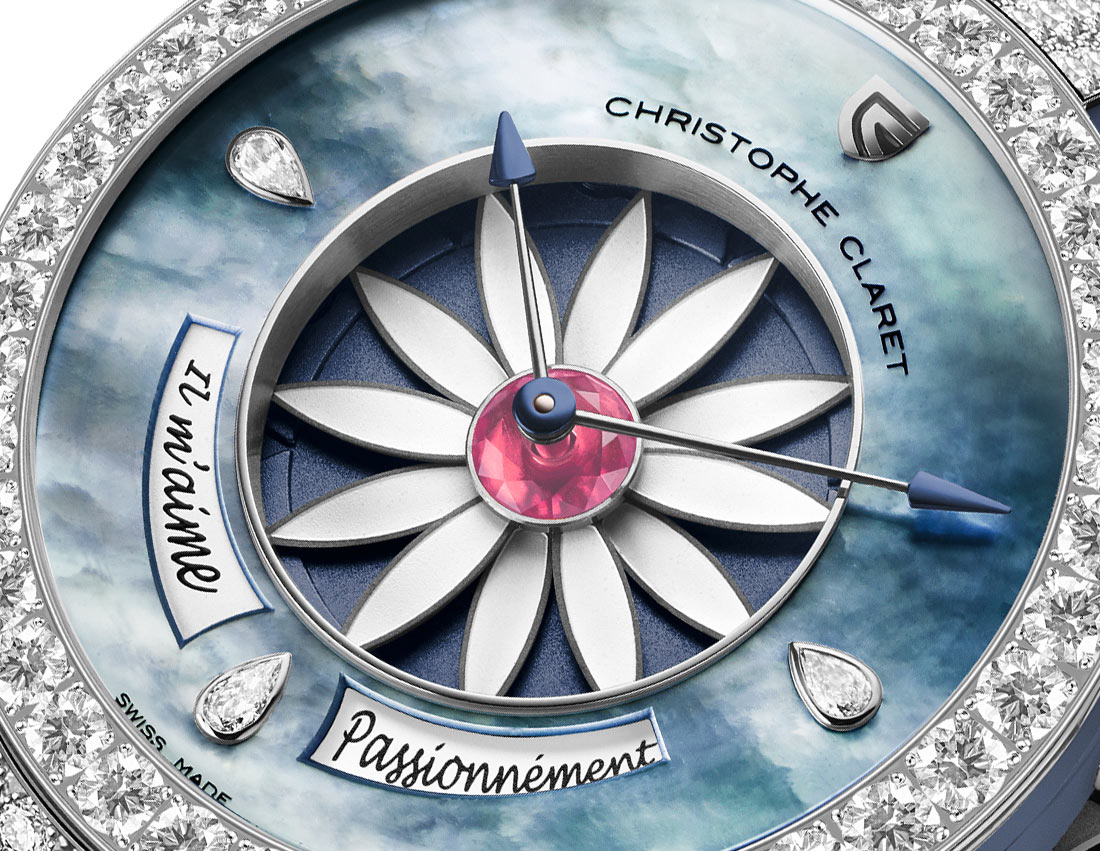 Here, we’ve got one of my favorite materials for, well, just about any application – mother-of-pearl. Here, it has a blueish hue, which calls to mind the color of the sky. Or, in this case, a pool of water, which happens to have a flower floating in the middle of it. That flower hides a secret, though. If you press the pusher at the 2 o’clock position, it will cause either one or two of the petals to disappear under the dial. This is to simulate the action of pulling petals off of a flower in the traditional “he loves me, he loves me not” game. Along with that, you’ve got a window over at the 4 o’clock position that randomly gives you the answer (in French) from one of five choices: un peu (a little) – beaucoup (a lot) – passionnément (passionately) – à la folie (madly) – pas du tout (not at all). 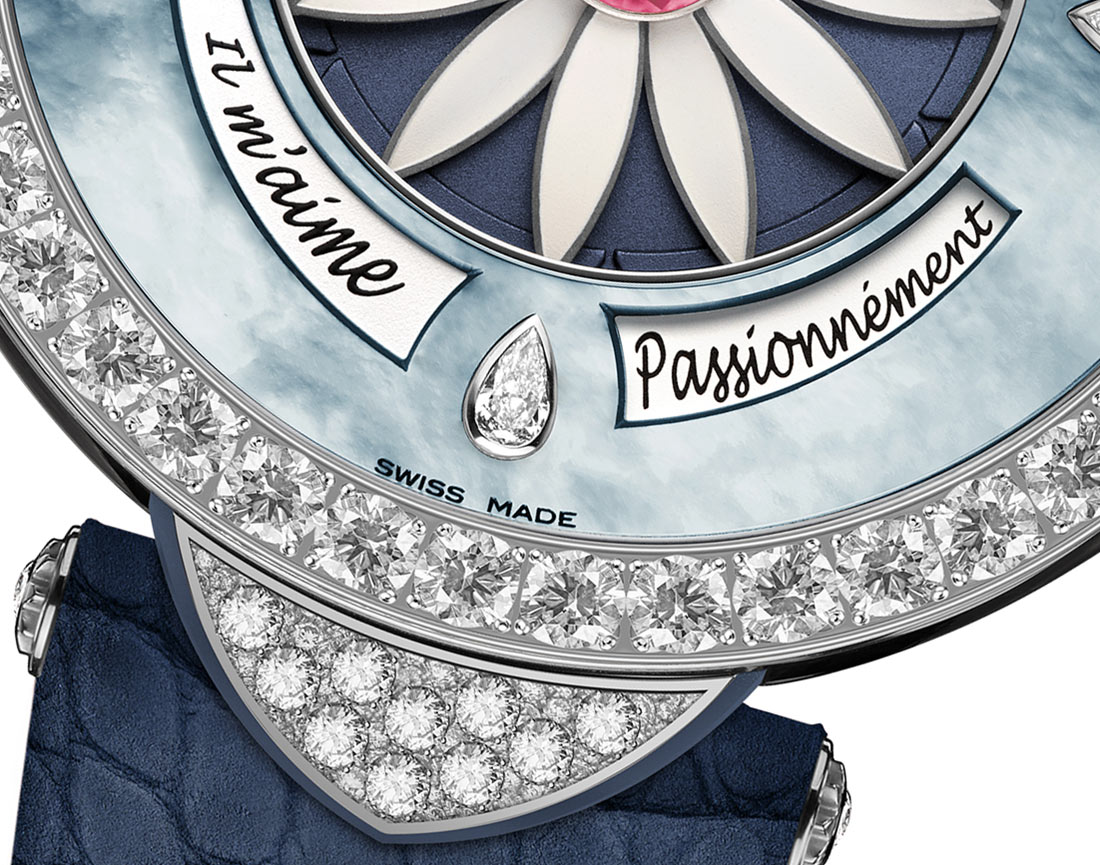 Along with that visual display, the Christophe Claret Margot Velours hits a chime at each press – and for those interested, you can watch the striker at work via a window at the 8 o’clock position. Then, when you’re all done with the petal-pulling game, you can press the pusher at the 4 o’clock mark, and the petals all come back, and the 4 o’clock window returns back to an ellipsis. All of this mechanical wizardry is courtesy of the EMT17 automatic movement that operates at 4Hz with a 72-hour power reserve. While you could say these various complications are frivolous, it’s the sort of frivolity that I really like, as it’s in the vein of the automatons that we’ve seen other brands build. Not strictly useful or practical, it’s a fun bit of whimsy made possible by some really impressive technical know-how. 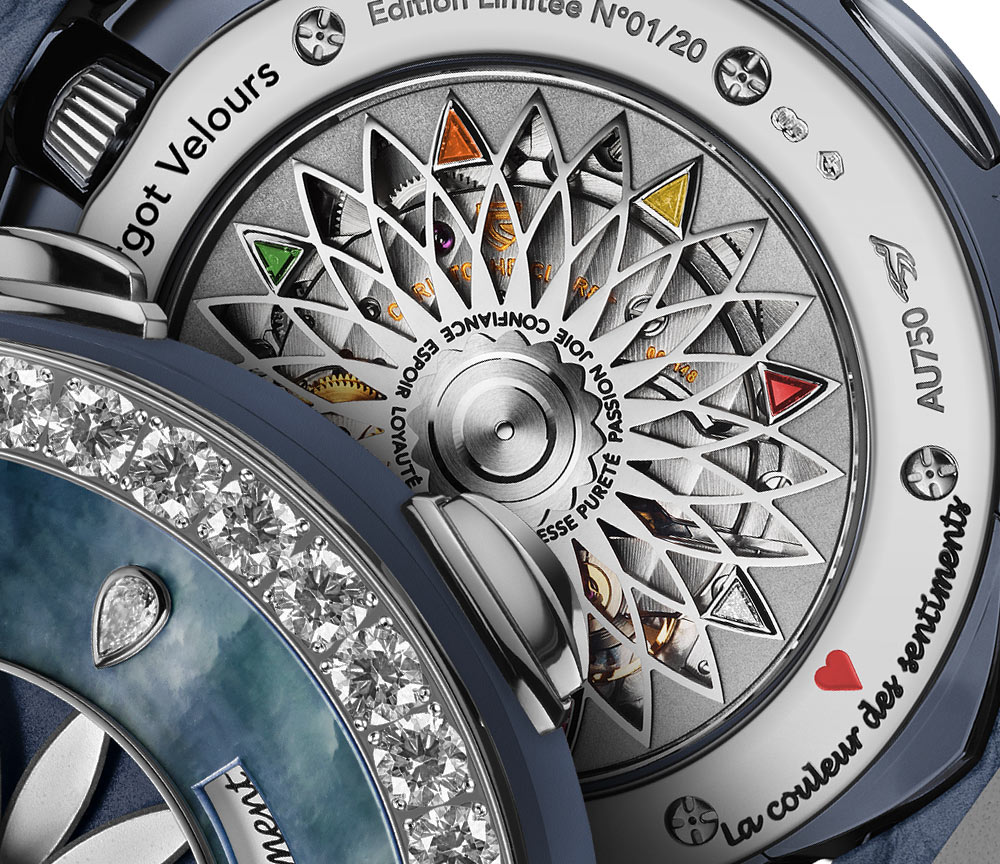 The reverse side of the Christophe Claret Margot Velours shows off some more gem-setting in the flower-shaped rotor, and you, of course, get a tidy view of the movement itself. Their verbiage assigns emotions to each of the gems set there, but that’s getting a bit far afield of what I can keep track of in my mind. Oh, and I almost forgot why the watch is named as it is. Obviously, the Christophe Claret Margot has been around since 2014, and we went hands-on with it here, but this latest iteration carries the Velours appellation due to the strap included. This is a blue alligator strap, but it’s finished in such a way that it feels like velvet, which we can all admit, is quite the soft touch. Sort of the descriptor you could apply to the watch as a whole. 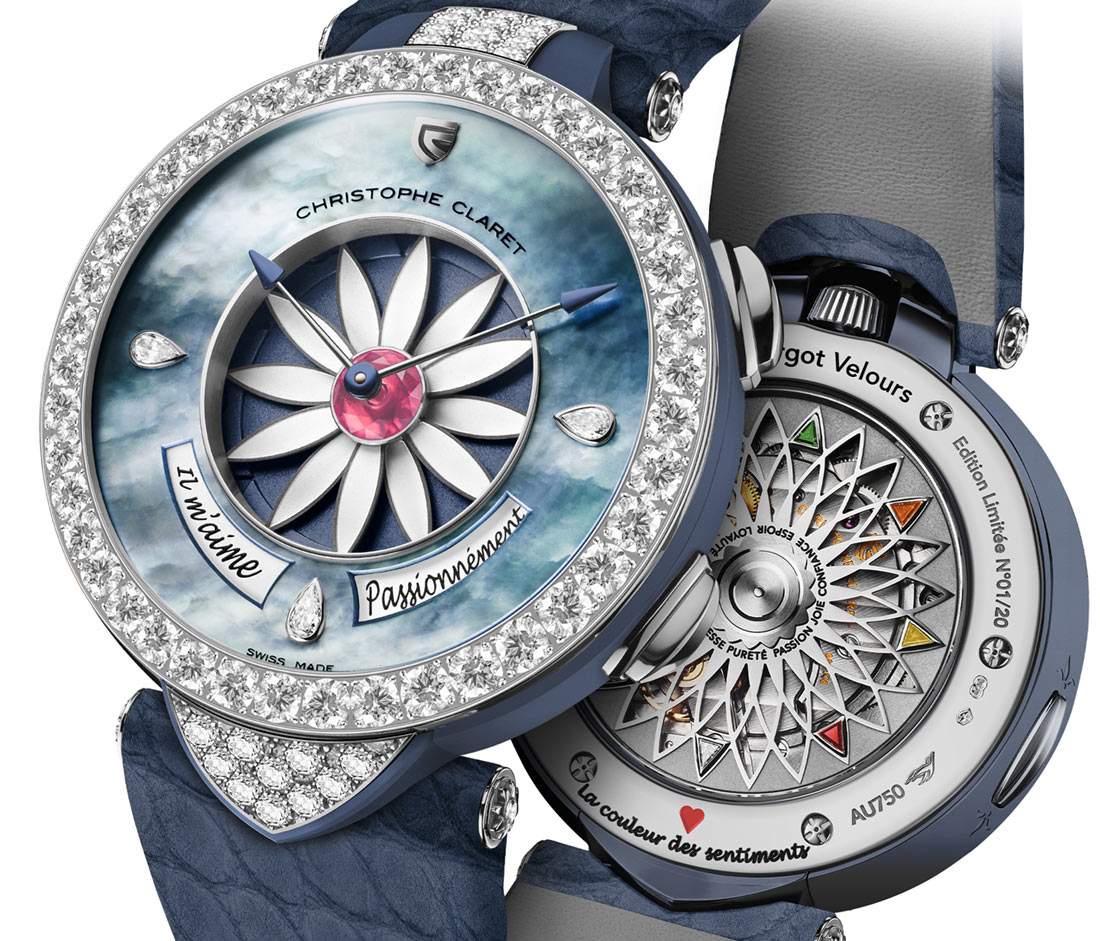 Now, if you, like me, are enamored by the mechanical animations and chimes of the Christophe Claret Margot Velours, you might be on the hunt to pick one up yourself. If you do, you’ll be part of an exclusive club, as only 20 examples are being produced, at a price of 198,000 CHF each – which might make me have to pull some petals to figure out how much I’m really into to the watch. Perhaps some things are just better observed from afar, rather than making the idea real on a wrist. Learn more at christopheclaret.com