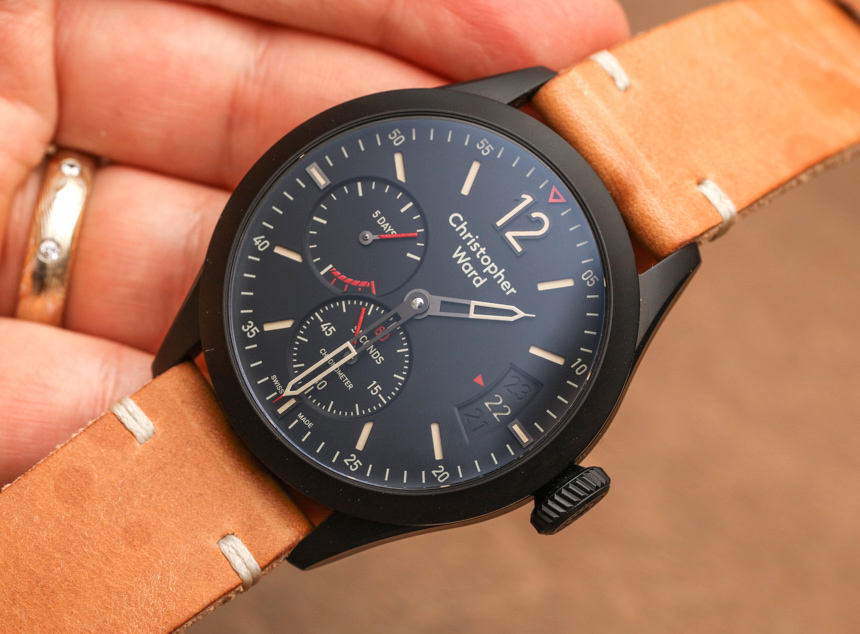 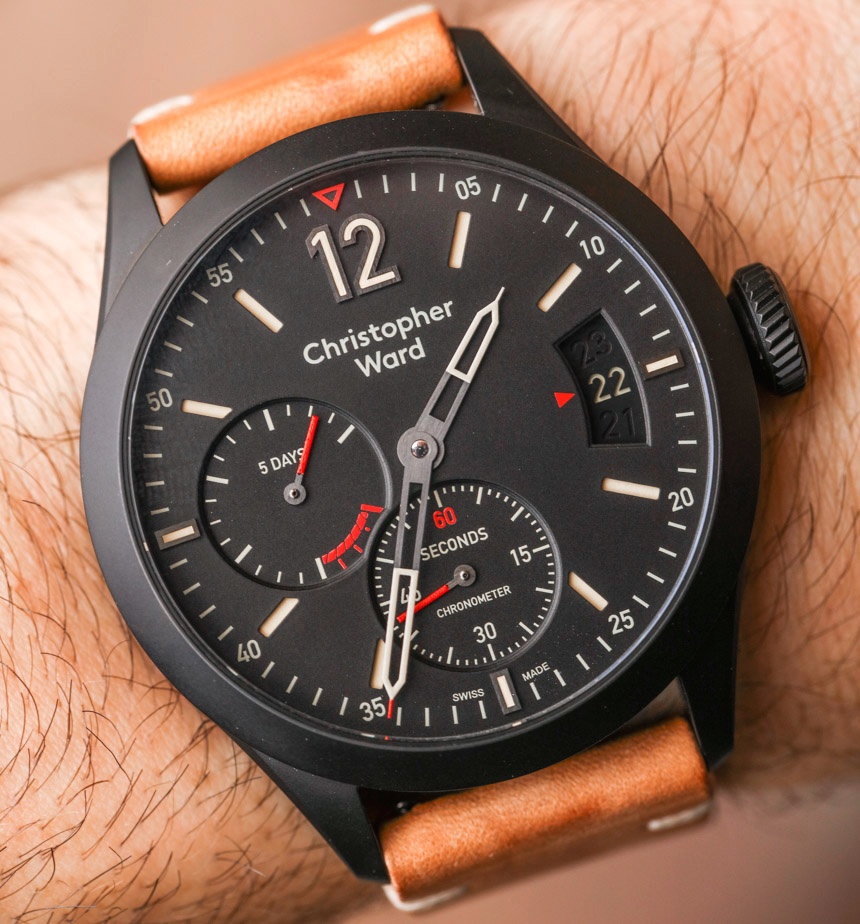 Debuted on aBlogtoWatch not too long ago, I now get to review the first “re-branded” Christopher Ward watch that I really like. Based on the dashboard instrument clock of some historic British military planes (follow the link above for more information about that), the Christopher Ward C8 Power Reserve Chronometer combines a cool modern design with an impressive movement and, as is typical of the UK-based brand, a lot of value for the money. UPDATE: Since our review of this watch Christopher Ward has decided to replace the initial strap with a different one. Pictures and details of that new strap are included below, but be aware that a less rough-style strap now comes with the watch.

While I know that the watch is vintage instrument clock-inspired, it does indeed offer what I feel is a modern look. The mostly matte-black surfaces, finishing of the movement, and overall design feels quite contemporary even though it is inspired by a “Mark II A Smith” clock. Over the years, a lot of successful timepieces have been inspired by plane dashboard instruments – and for good reason. Such instrumentation has always been designed to be very legible and functional even in the dark. Moreover, they conjure up ideas of adventure, professional expertise, and of course, an active lifestyle. 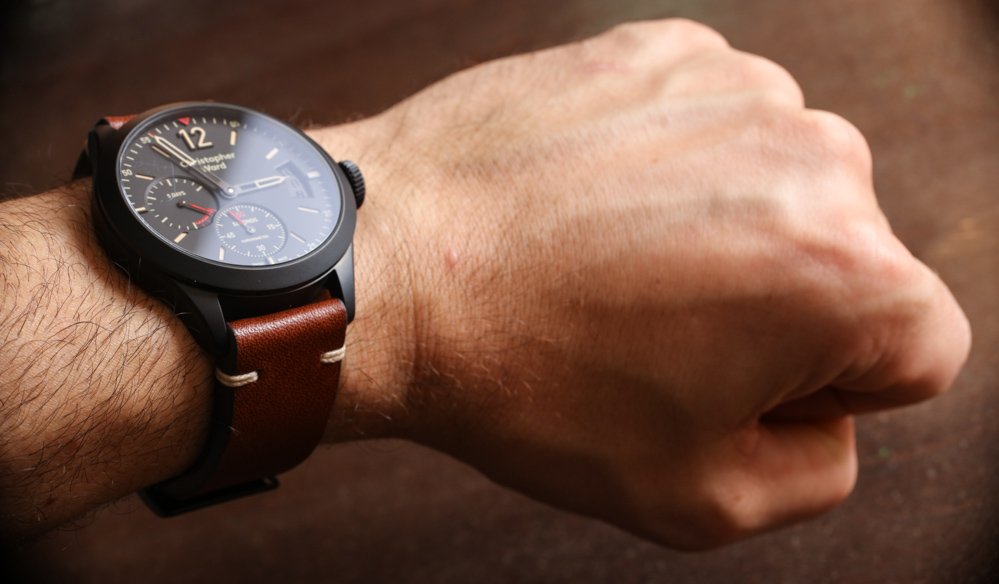 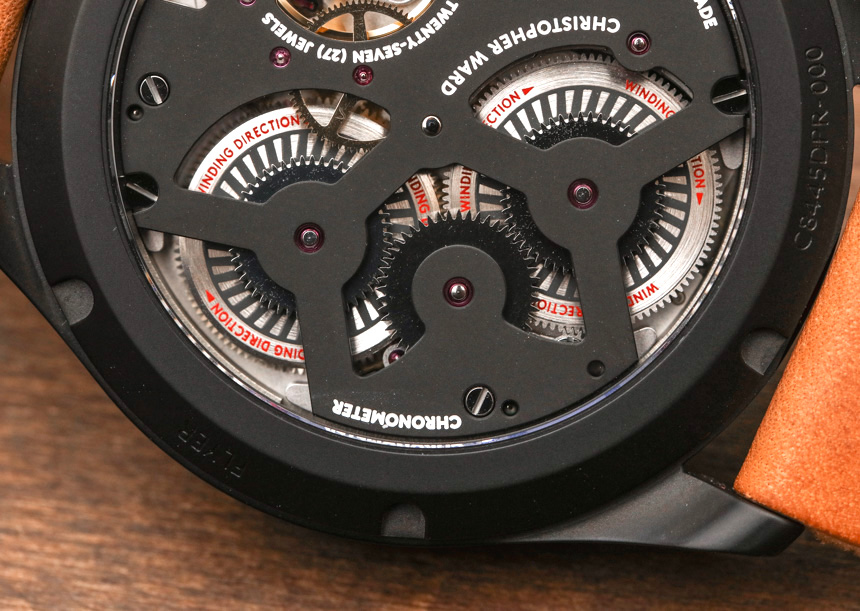 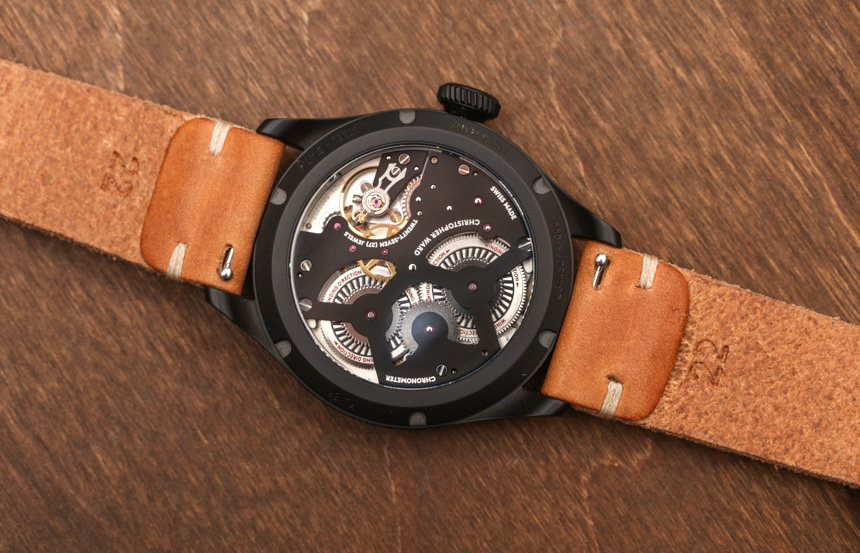 Let’s focus on the movement for a moment. Inside the Christopher Ward C8 Power Reserve Chronometer is a version of the brand’s “in-house” SH21 mechanical movement that was debuted back in 2014. The movement was designed by Johannes Jahnke who works for Christopher Ward in Switzerland. The brand claims that the movement is “100% Swiss Made,” and it offers a lot technically for the money. The original SH21 was an automatic, but as you can see, it has been modified here to be a manual movement with a power reserve indicator. Christopher Ward changed the bridge architecture of the movement as well as some of the decoration to make it match the matte black theme of the overall watch – and to make it appear a bit more aviation-inspired. Looking at the two mainspring barrels, you can see a “wind turbine” motif. 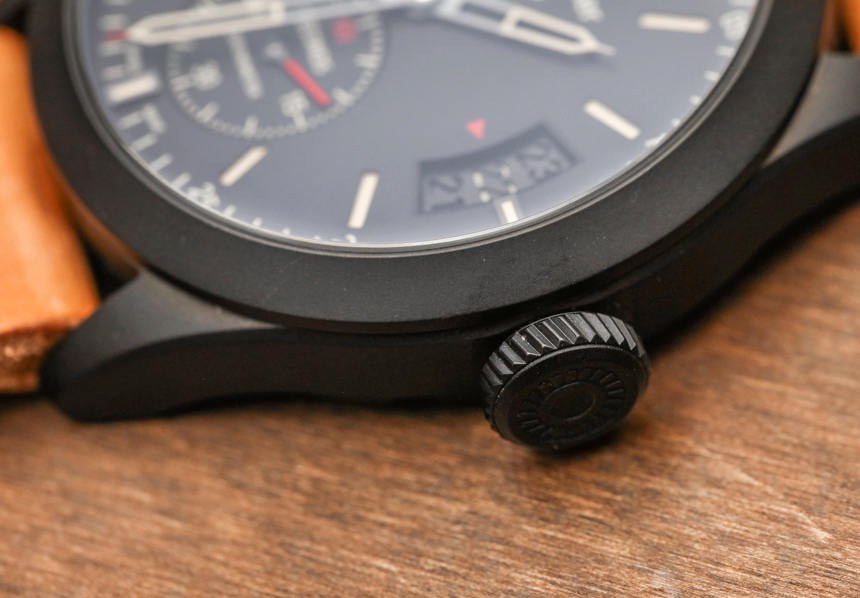 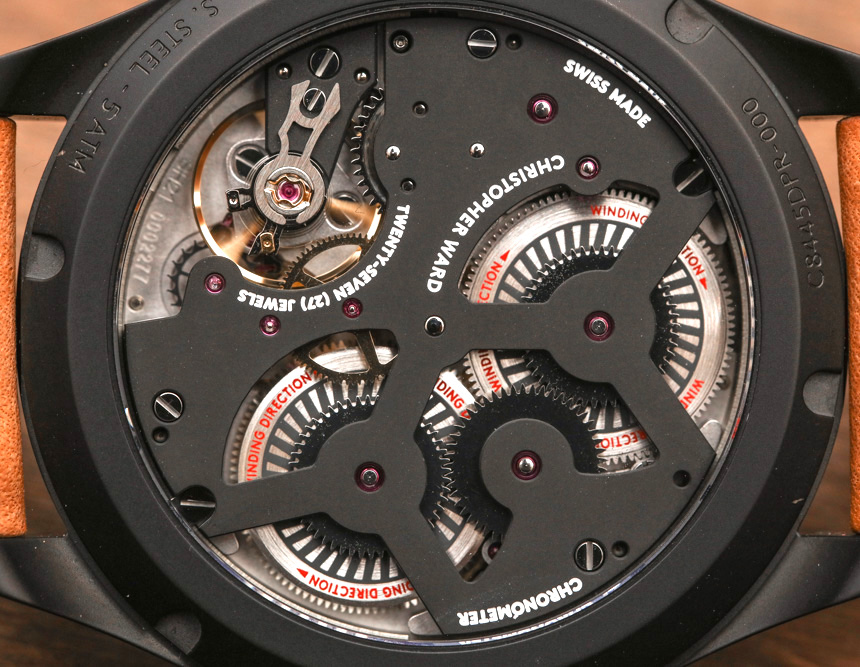 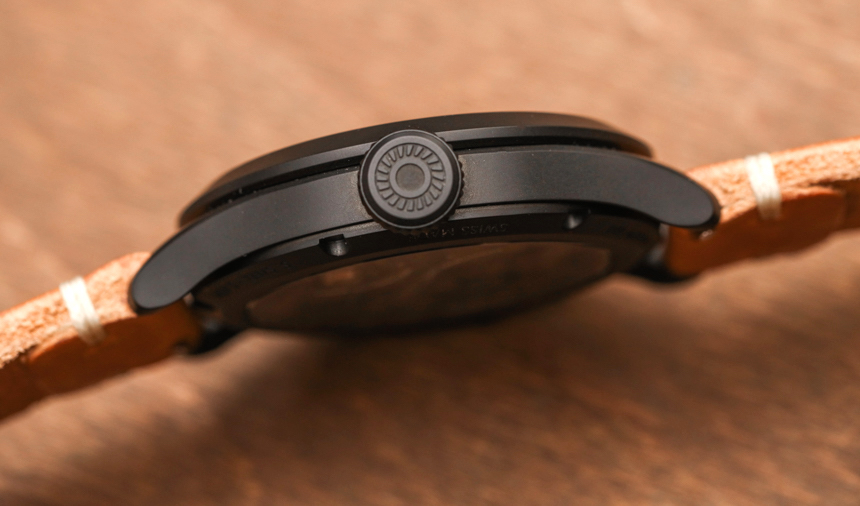 Losing the automatic rotor also means the movement is thinner – which helps the watch wear very nicely. The 44mm-wide case is 11mm thick – and it wears very nicely. You can see the movement through the exhibition caseback – and the visual effect is really appealing with the contrast of polished silver-toned surfaces and matte black. As the name of the watch implies, the caliber SH21 movement inside of this C8 model is COSC Chronometer certified. 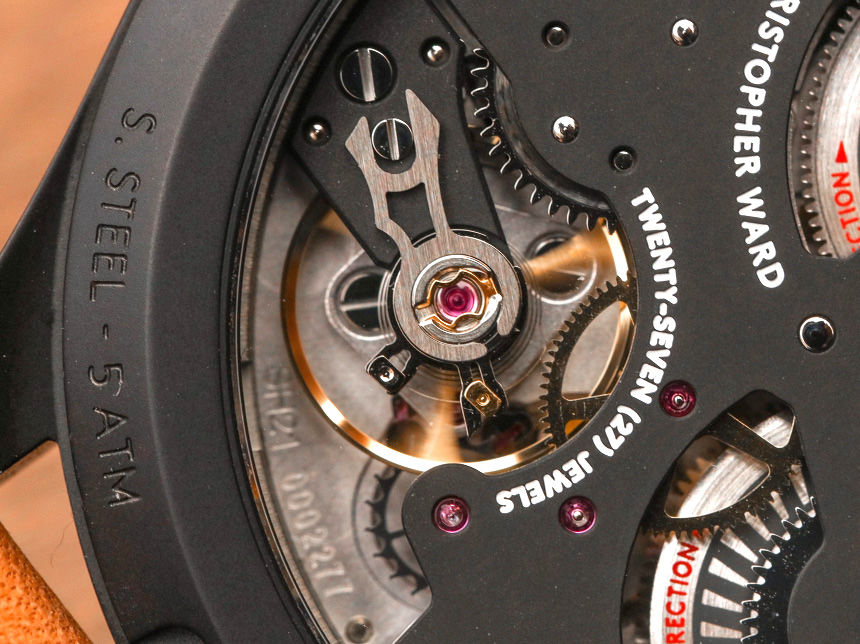 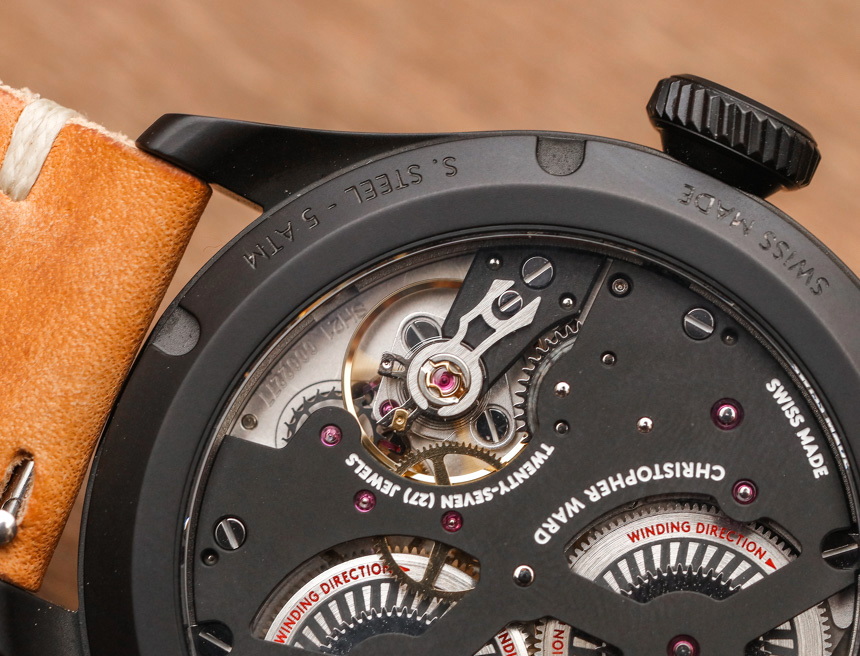 One of my original complaints about the SH21 movement was that it was quite thick. It is a larger caliber, but in sport watches that makes a lot more sense. As I mentioned, without the automatic winding mechanism it slims down significantly. The movement operates at 4Hz (28,800bph) with a long power reserve of 5 days. You’ll need to turn the crown a healthy number of times to fully wind the movement. Even though I am generally not that interested in manually wound watches, I make an exception for those with power reserve indicators on the dial – which the Christopher Ward C8 Power Reserve Chronometer clearly has. 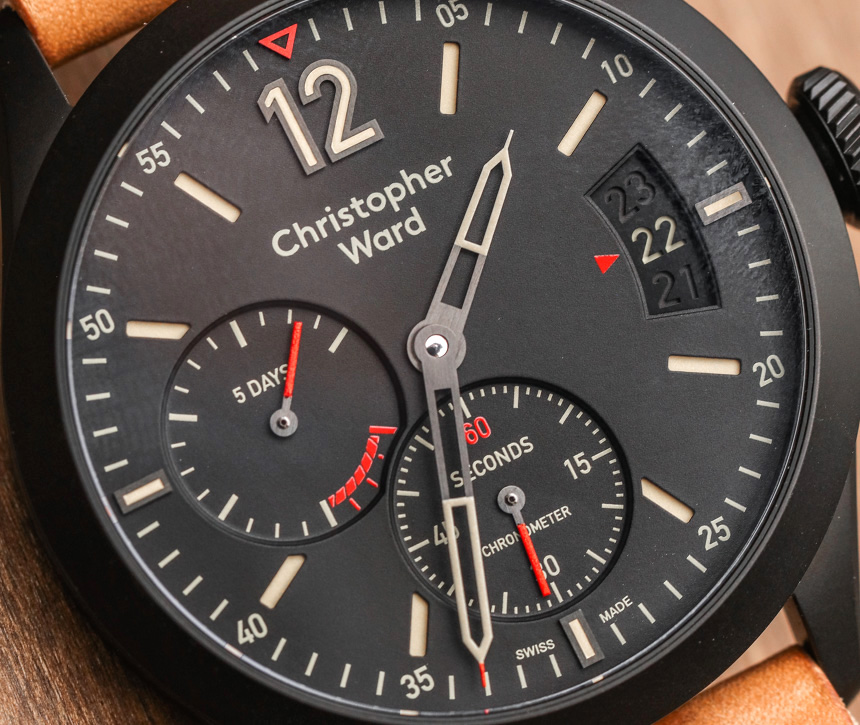 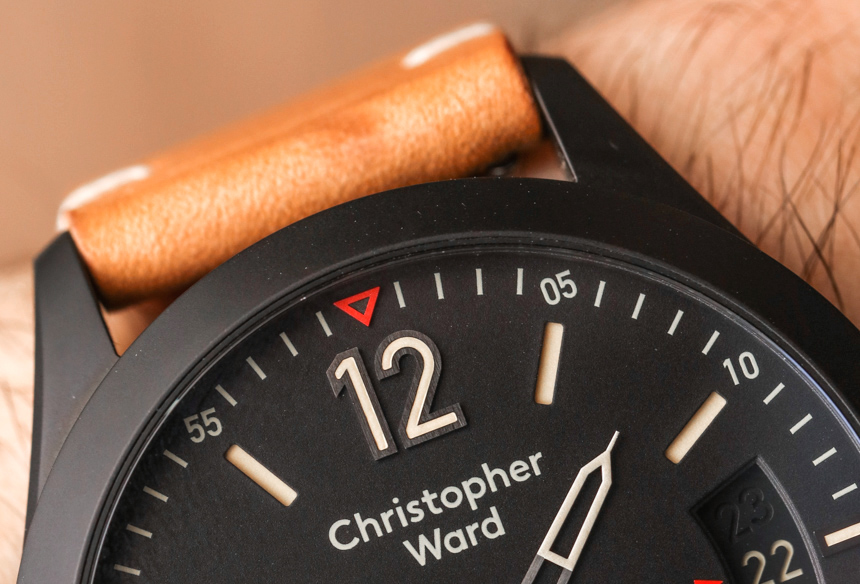 Not everyone seems to like the dial design of the Christopher Ward C8 Power Reserve Chronometer, but I’m not opposed to it. It has been called “busy,” which to me is ironic since I see it as being rather minimal given the information it displays. This is the first watch I’ve handled that has the controversial new Christopher Ward logo in a more aesthetically pleasing symmetrical design, so I am happy about that. The face offers the time with subsidiary seconds dial, power reserve indicator, and date. The latter is done in a sort of a cool way that is half exposed – but not really. The date disc numerals are cut out, so you really only see the current date when it is over the tan-colored area. 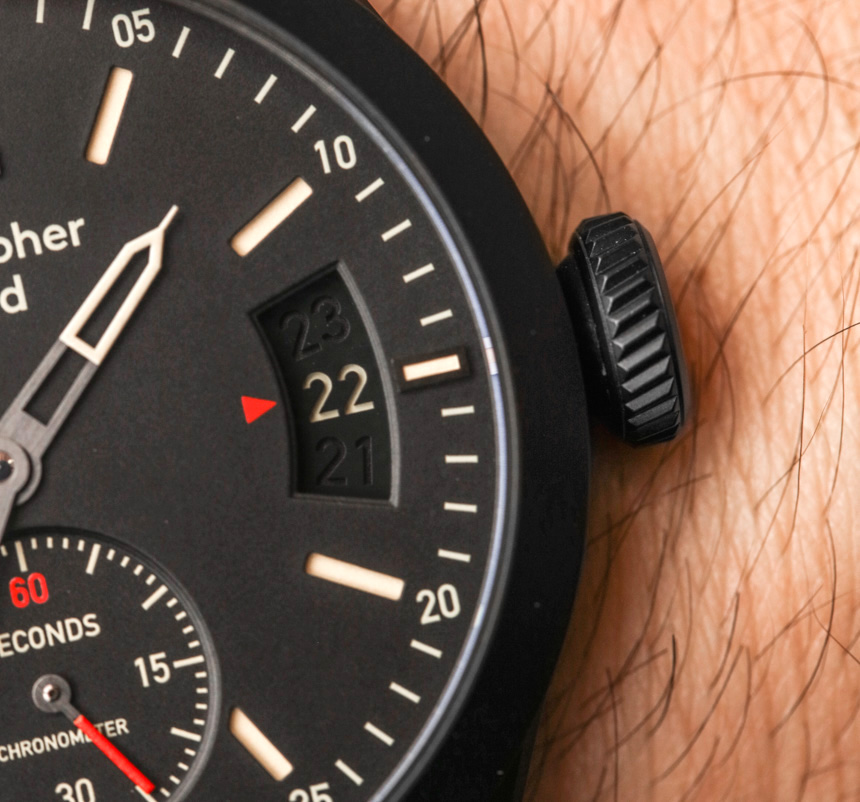 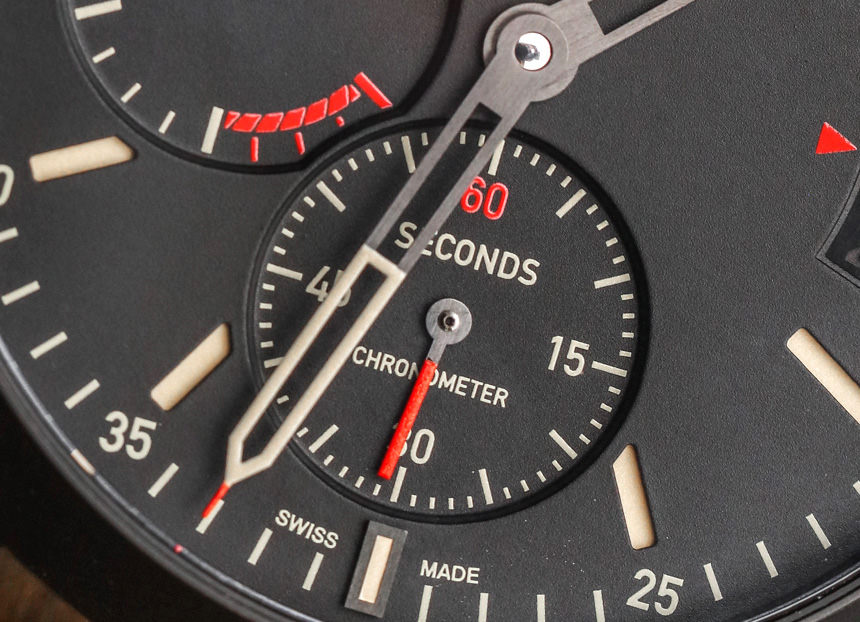 The dial also has some welcome depth – which you don’t see on pilot-style dials a lot. The “vintage-style” colors are not bad, and are made of Super-LumiNova in most instances. Red accents are a welcome sporty touch. Depth is created by the recessed subsidiary dials, applied 12 o’clock hour indicator and a few other markers, the date window, and the hands. This is also one of the few times where I am not bothered by skeletonized hands (which I tend to think are an over-used design element which harm legibility more than they offer aesthetic value). 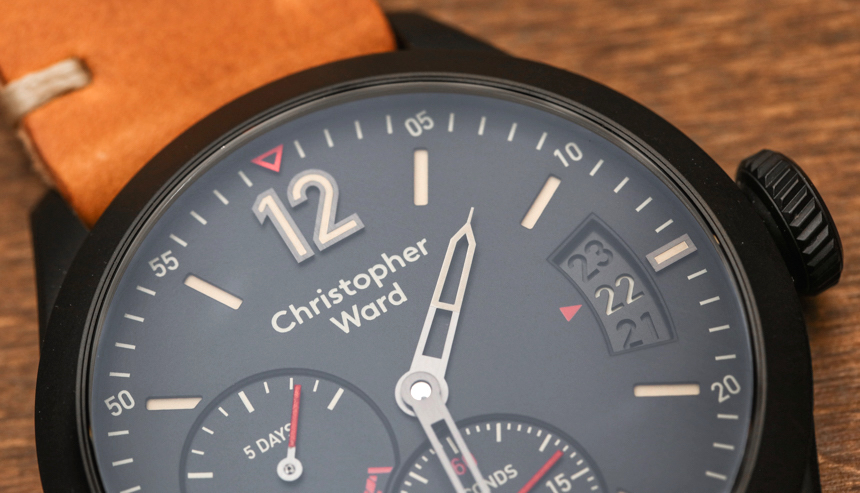 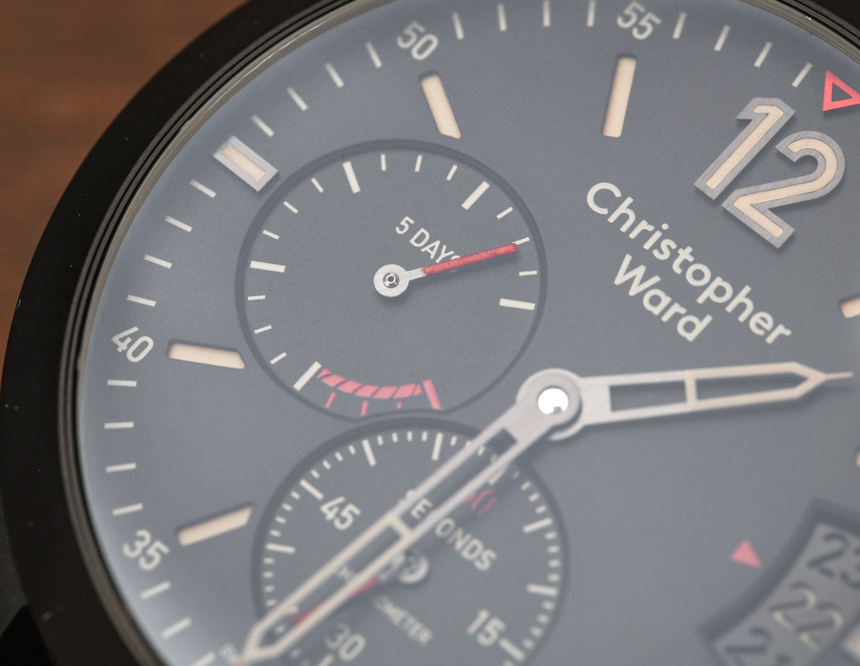 At worst, the dial of the C8 Power Reserve Chronometer is an acquired taste, but it doesn’t violate any major design rules. I happened to find it a nice element not only for being distinctive, but also for playing around with some new elements you don’t often see in pilot watches. This is part of a larger mission by the brand to make more distinctive designs which are clearly recognizable as Christopher Ward watches. 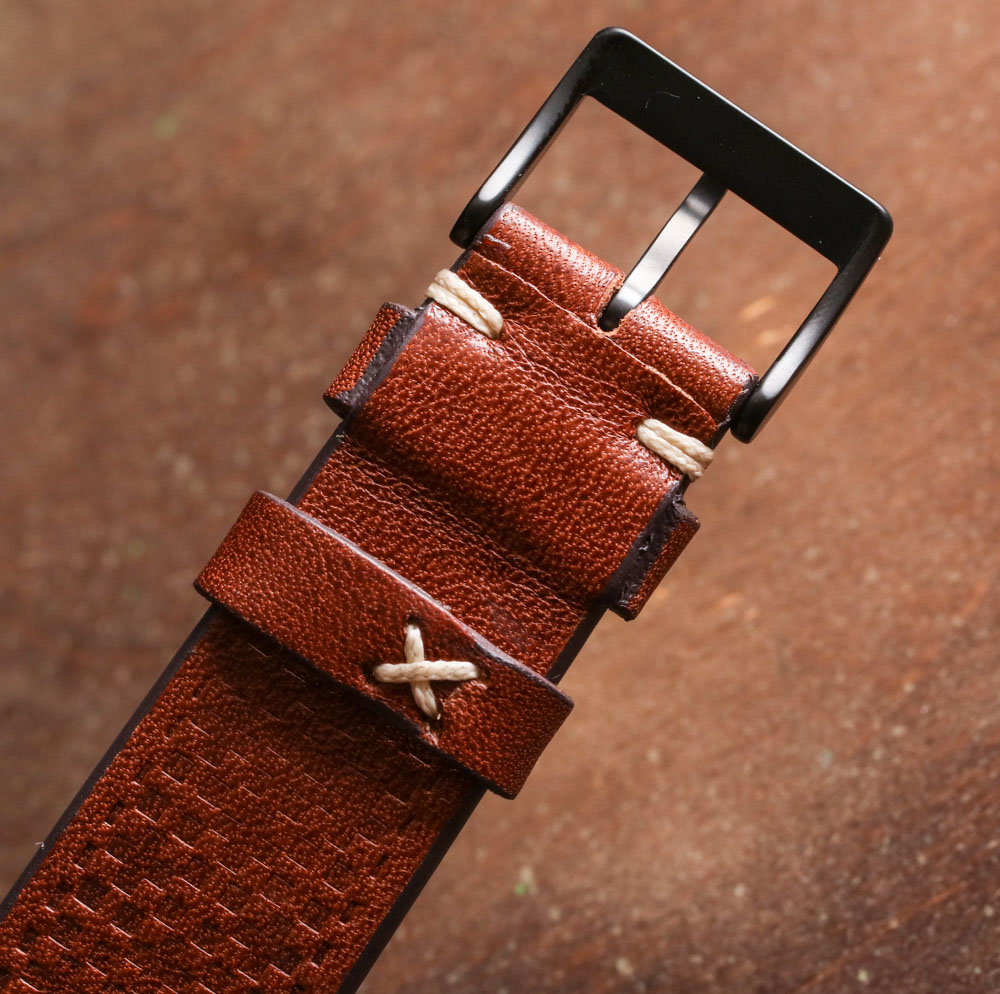 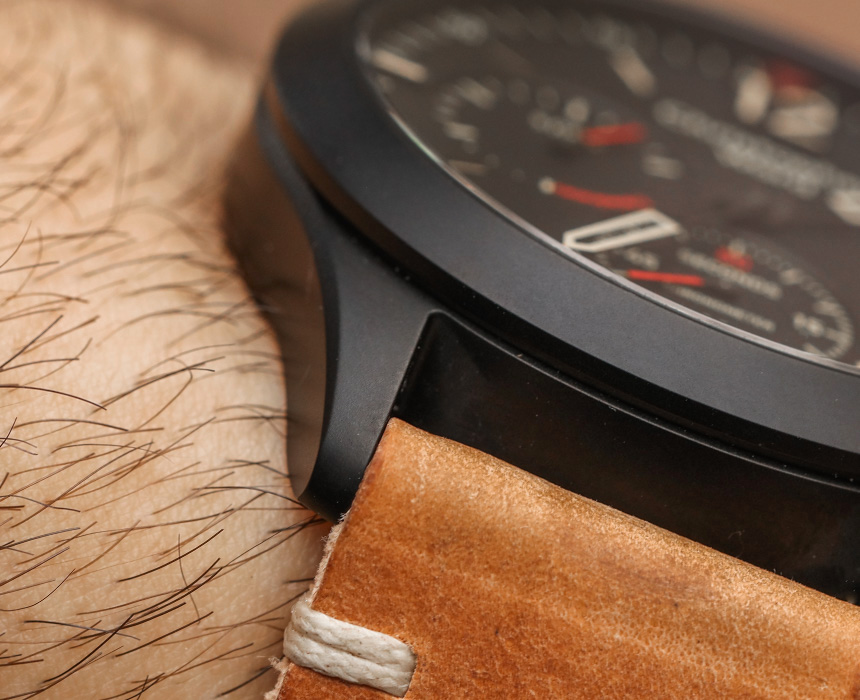 At 44mm wide, the Christopher Ward C8 Power Reserve Chronometer sports a healthy size, and I like the matte-black case finishing which is applied using a DLC-coating. The overall case architecture isn’t bad either, and even the side profile feels proportionate and attractive. Over the dial is a flat AR-coated sapphire crystal, and the case is water resistant to 50 meters. Weight of the watch is 81 grams. 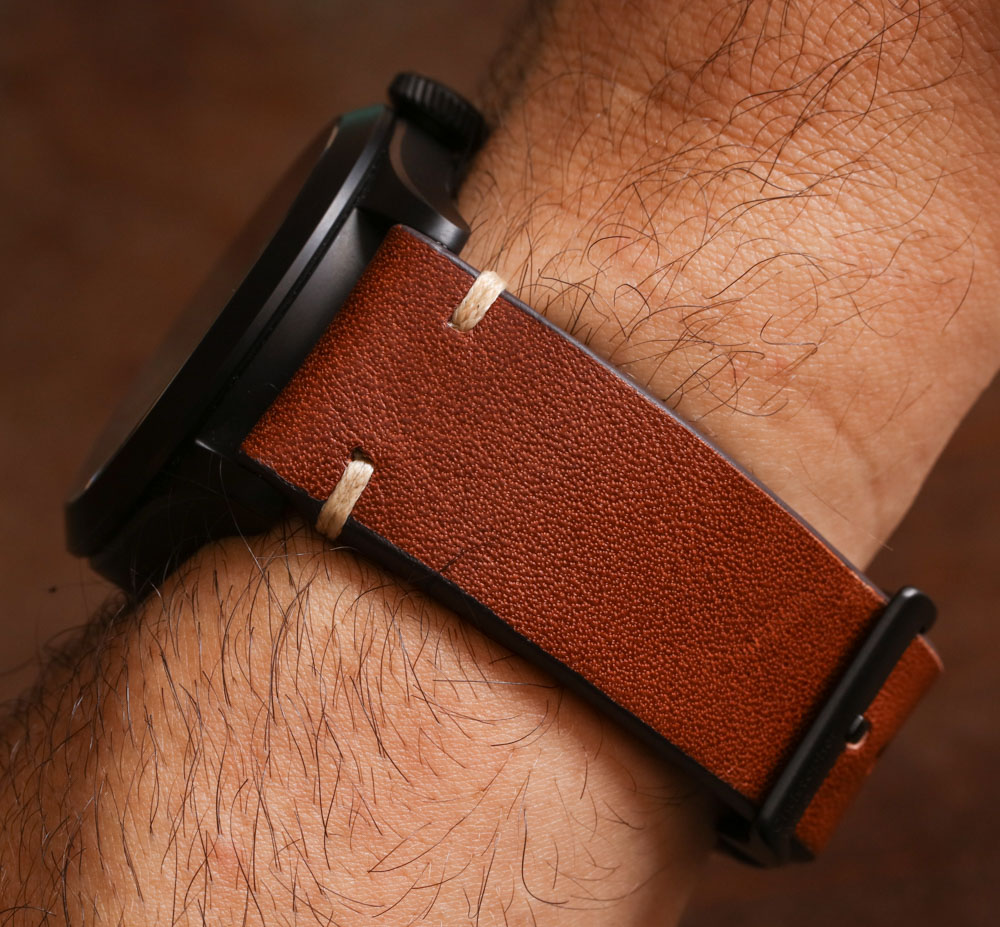 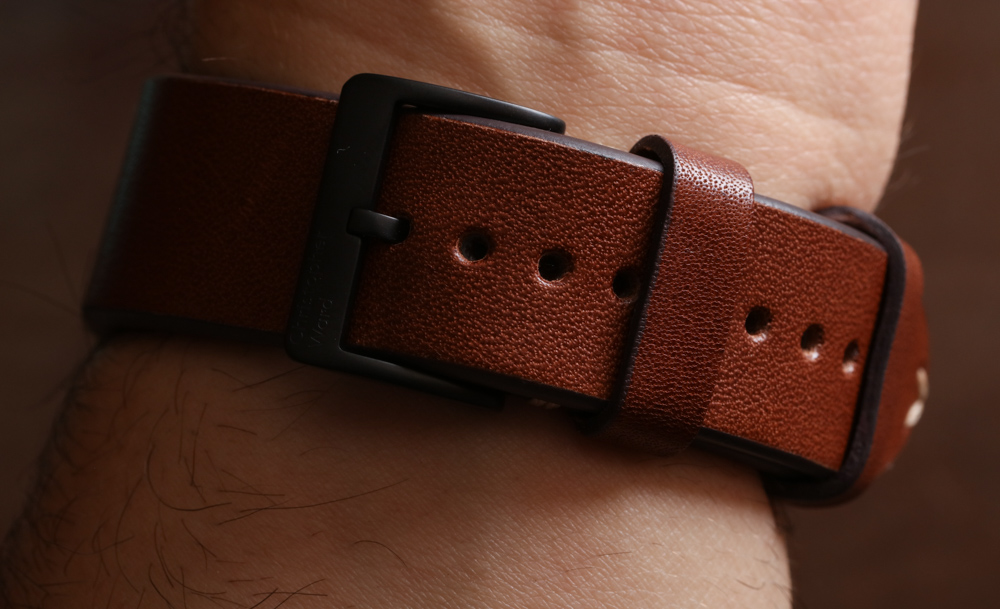 There are so many competitive mechanical pilot watches out there that it would be difficult to measure up the Christopher Ward C8 Power Reserve Chronometer in relation to a reasonably sized sample of them. When it comes down to it, people are mostly going to choose style. If you want a truly classic or iconic pilot watch design, you’ll probably opt for something else that appears more familiar. If those designs bore you, or if you have enough of those already in your collection and really like pilot watches, then this a good choice. Where Christopher Ward really shines is in distinctive design as well as a lot of value for the money. The SH21 is still a bargain, and in this configuration there is little else out there with the same features, COSC Chronometer certification, and long power reserve. It also frames the current Christopher Ward branding in a way that I think company loyalists will appreciate. 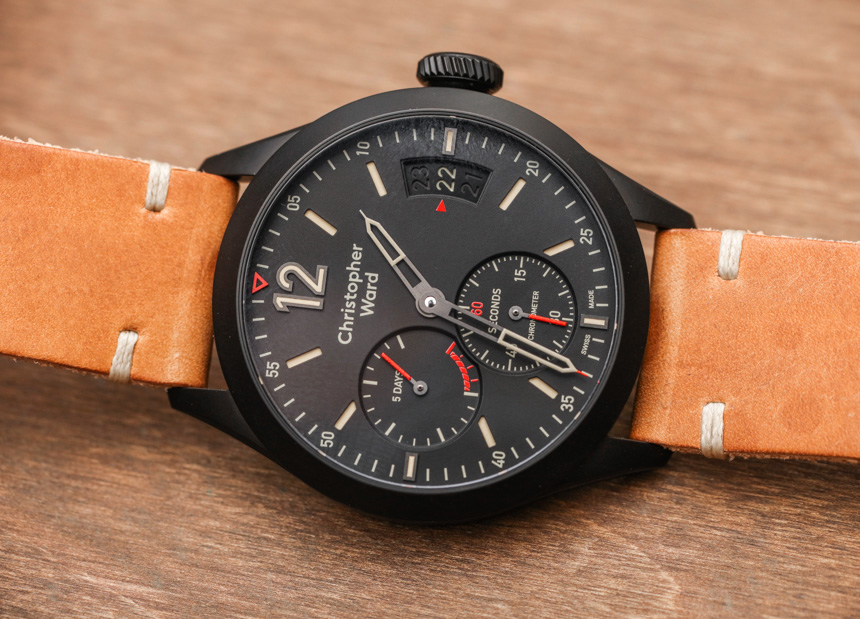 Christopher Ward offers the C8 Power Reserve Chronometer on three different “whip stitch vintage Tibor leather straps” that come in black, brown, camel (as tested). I like that they offer a quick-release pin and they are reasonably stylish. The stock strap is quite long, so people with smaller wrists like me will need the shorter strap option. The straps by design feel a bit “rough” and will not appeal to everyone. Personally, I would swap out the stock strap for something a bit more high-end-feeling. The straps that come with it will no doubt be considered fashionable by many people, but given the quick release bars it’s obvious Christopher Ward wants its customers to play around a bit with the look of the watch. UPDATE: As mentioned above, Christopher Ward decided to use a different strap on the C8 Power Reserve after we did our review. I have images of the watch on the update strap, which is newer and cleaner feeling that the rougher ones you see in many of the images in this review. 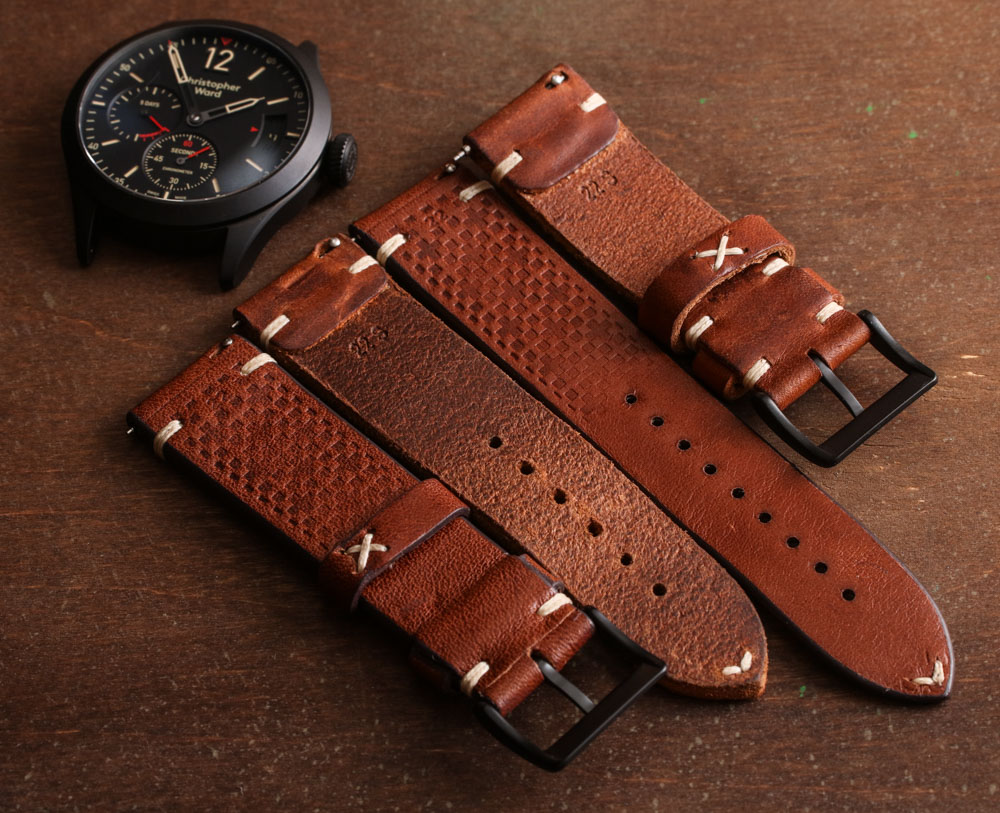 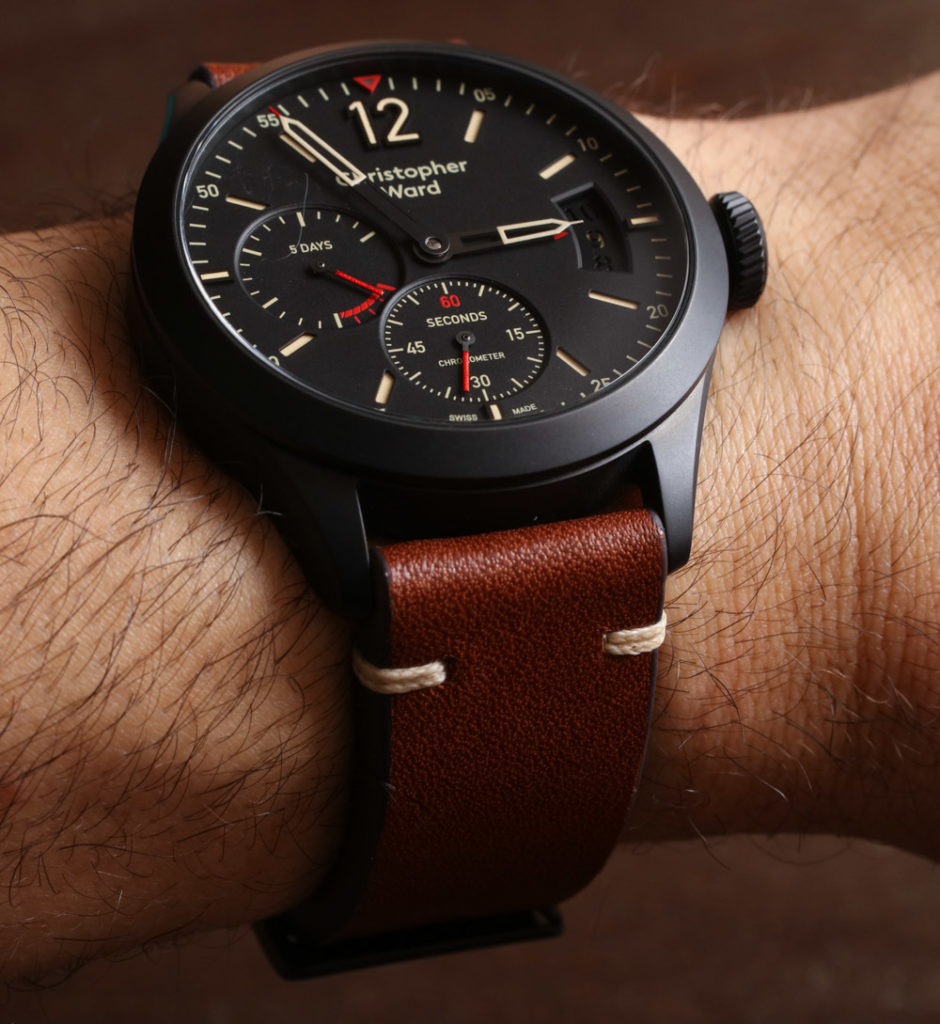 Necessary Data
>Brand: Christopher Ward
>Model: C8 Power Reserve Chronometer
>Price: US$2,060
>Size:44mm wide, 11mm thick
>Would reviewer personally wear it: Yes.
>Friend we’d recommend it to first: Someone looking for a distinctive-looking pilot watch that has some standout technical features and a fair price.
>Worst characteristic of watch: Design will not universally appeal to everyone, but some people will love it. Darkness visibility could be a bit better. Stock straps are a bit too rough for some tastes.
>Best characteristic of watch: Impressive execution of SH21 movement and lots of value for the money. Striking and distinctive look which adds to overall Christopher Ward brand character.