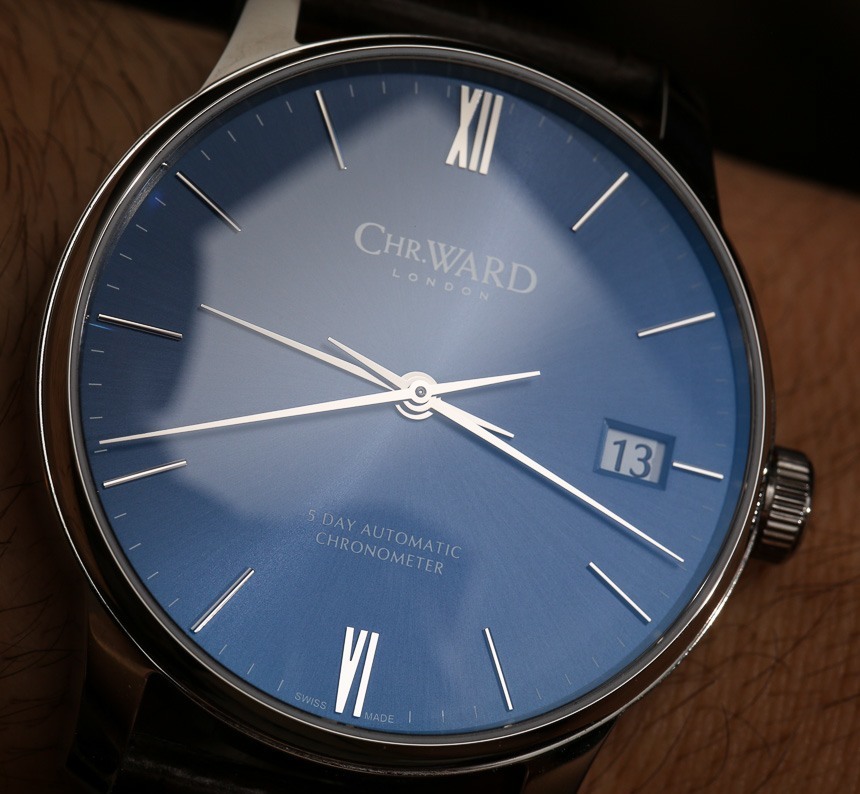 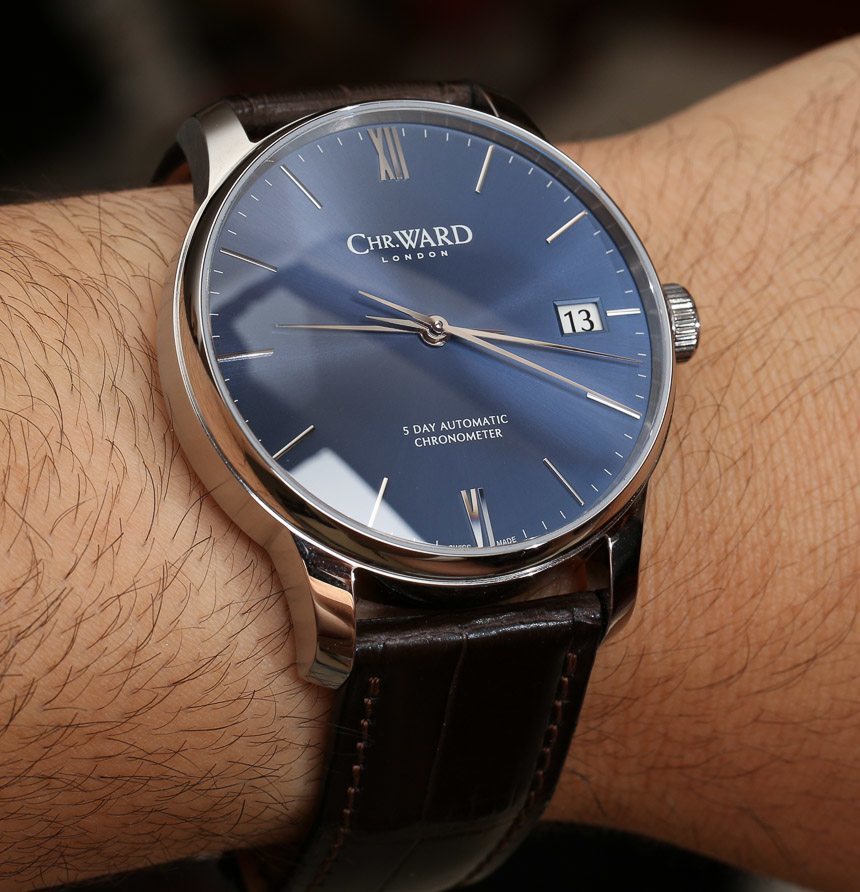 Today, London-based watch brand Christopher Ward introduces their first totally in-house assembled and designed movement, known as the caliber SH21. This development is such a big deal for the company that I spend time on a conference call with them to discuss it. Most watch brands simply would not take the time, but Christopher Ward understands how important the caliber SH21 is for them, as well the C9 Harrison 5-Day Automatic watch that the movement debuts in.

Just an in-house made movement? Yes and no. What is important to understand here is the quality of this particular in-house produced mechanical movement and the price being asked for it compared to similar Swiss movements. For about $2,000, you can own a really nice movement with very attractive features. 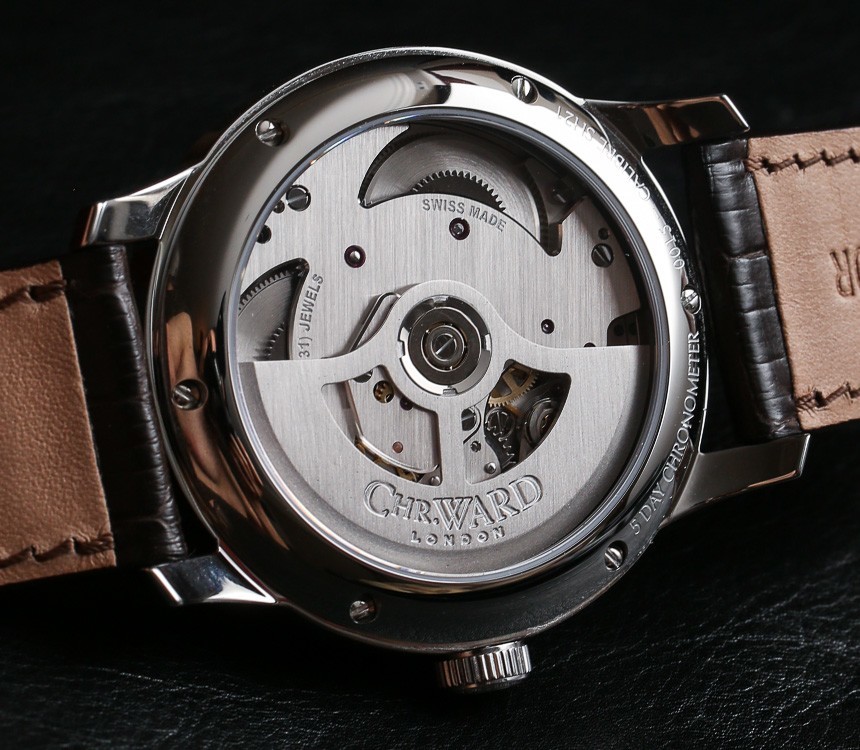 Christopher Ward credits the master watchmaker Mr. Johannes Jahnke at Synergies Horlogeres for the development of this exciting new base movement. That’s right, like most new in-house made mechanical movements we see popping up these days from luxury Swiss watch brands, the SH21 was designed as a workhorse base movement that future modules will be placed on top of. For its debut, Christopher Ward has designed the three-hand with date C9 Harrison 5-Day Automatic watch. In the future, additional variations of the SH21 will be produced and include a range of dial layout variations and complications, ranging from a GMT hand to a chronograph.

The Harrison collection is already Christopher Ward’s premium collection of watches. Christopher Ward is a unique watch brand for a few reasons. Based in England, Christopher Ward was designed from the outset with a direct-to-consumer model in mind, selling directly to customers via the internet and catalogs. In fact, coincidentally enough, the release of the SH21 movement occurs during the 10-year anniversary of the company. 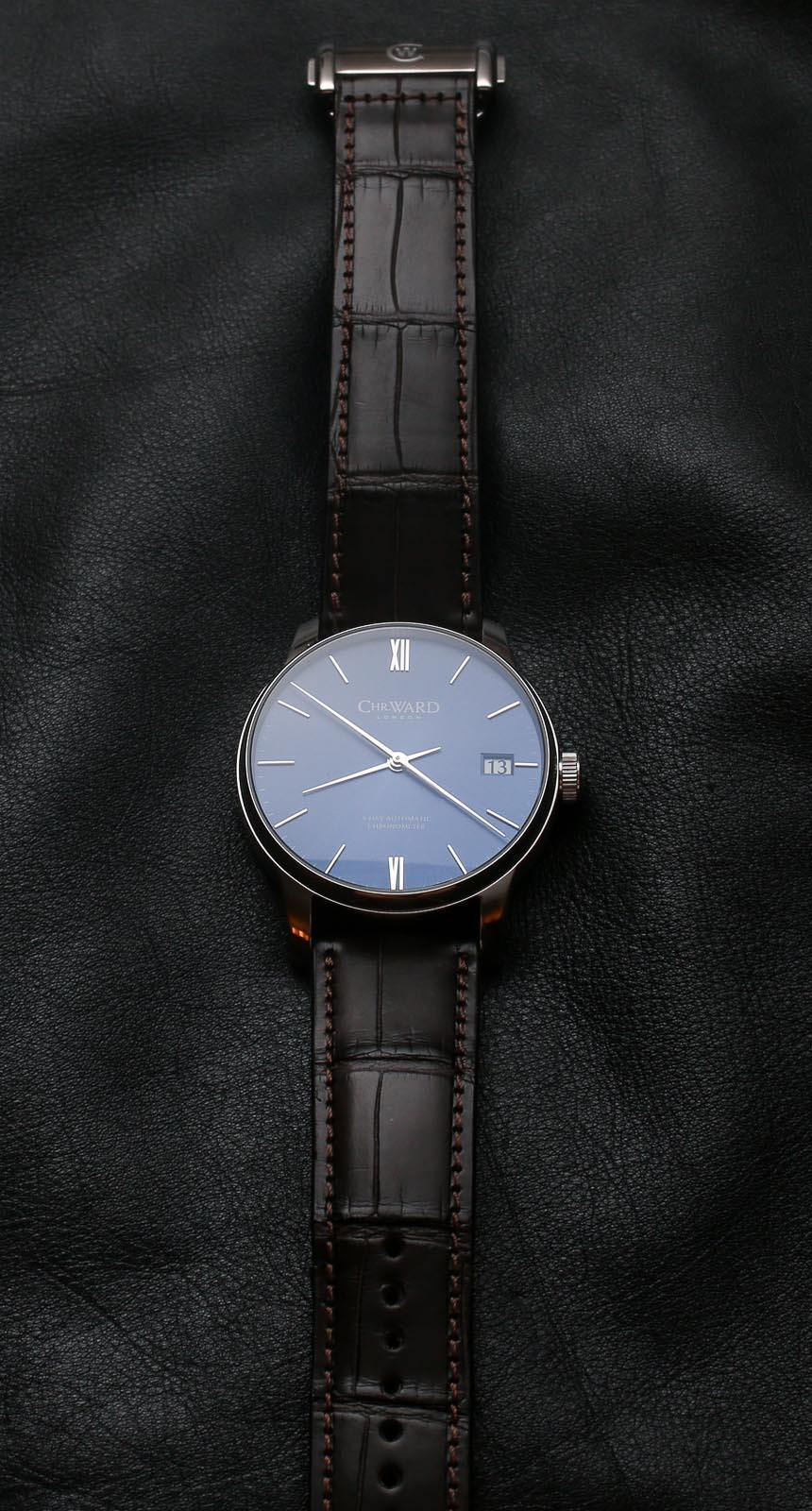 Let’s discuss a bit more about the caliber SH21 and what you can expect from it. Devised from the ground up with performance and reliability in mind, the SH21 is truly modern in its size and feature set. It takes into considering modern demands of a Swiss watch movement, while keeping in mind that value is very important. Without any additional complications or modules, the SH21 contains 164 parts total, with 112 different types of components. Each is produced via a range of suppliers, and Christopher Ward has done some interesting things in order to get the parts it needs. 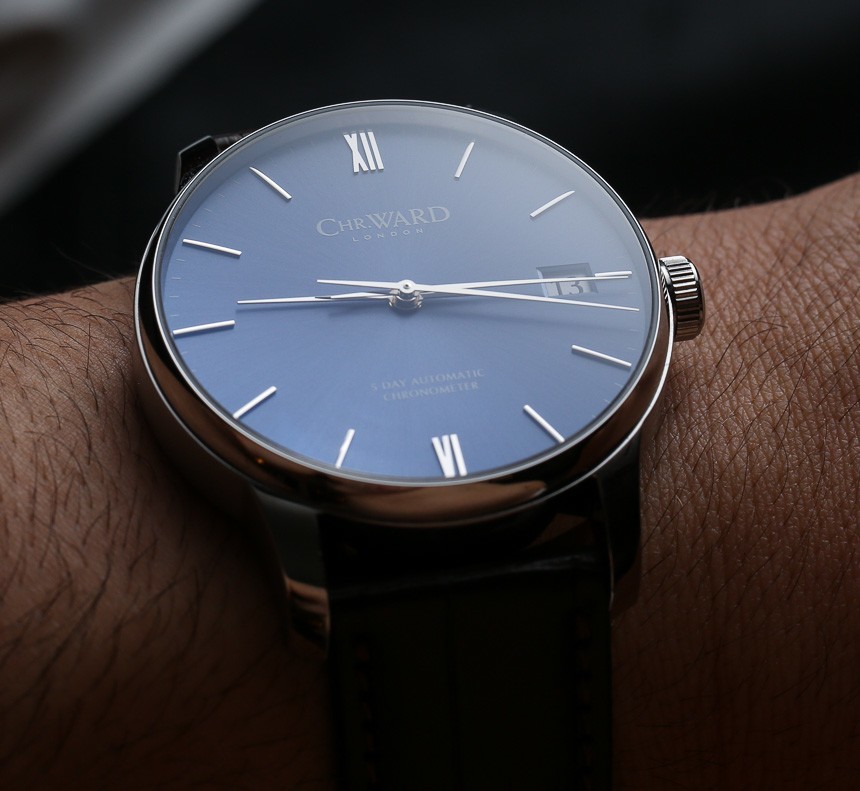 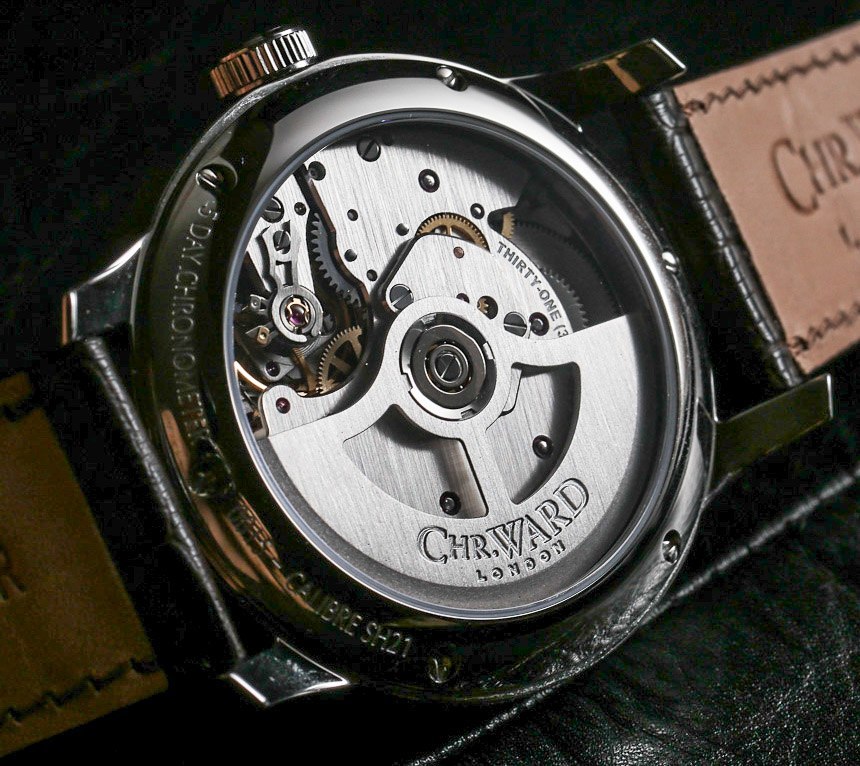 Christopher Ward, of course, works with some of Switzerland’s best watch industry suppliers in getting the parts for the movement, but they also work with “alternative” suppliers, such as companies that produce parts for the medical device industry. Of course, a legitimate question is whether or not the SH21 can be defined as “in-house made,” since many of its parts are produced by suppliers and then assembled under Christoper Ward’s control. That is a good question and is an added element on top of “in-house designed and assembled.” The basic notion is this: the investment to acquire the machinery and talent to produce parts right off the bat makes little sense, and most brands work with suppliers to get parts for their movements – just to varying degrees. I wouldn’t focus on whether or not Christopher Ward actually currently owns the machines that produce each component, but rather that the movement is designed by them and assembled under their quality control guidelines in-house. I will also add that according to Christopher Ward, the SH21 movement is 100% Swiss Made.

All SH21 and later variants are going to be COSC Chronometer certified, which means they need to be be consistently built with that level of accuracy in mind. The SH21’s most important feature is the double mainspring barrels which offer 120 hours (5 days) of power reserve. This, of course, is merrily coupled with a 4Hz (28,800 bph) frequency of the balance wheel. This is very good because you have a long power reserve without the sacrifice of a slower operating speed (that translates to more accuracy over time).

The SH21 is also an automatic, and uses an automatic rotor, produced from solid piece of tungsten. This helps reduce the thickness of the rotor because it doesn’t need to have a weight applied to it in order to increase its mass for winding efficiency. Actually, unless you were told the rotor was produced from tungsten, you’d likely not know, as it is finished to look the same as the rest of the movement. 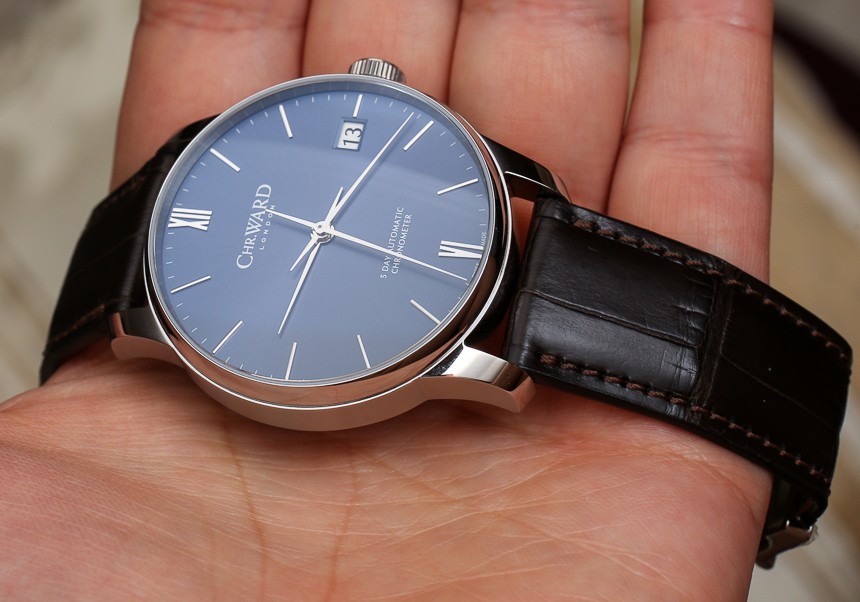 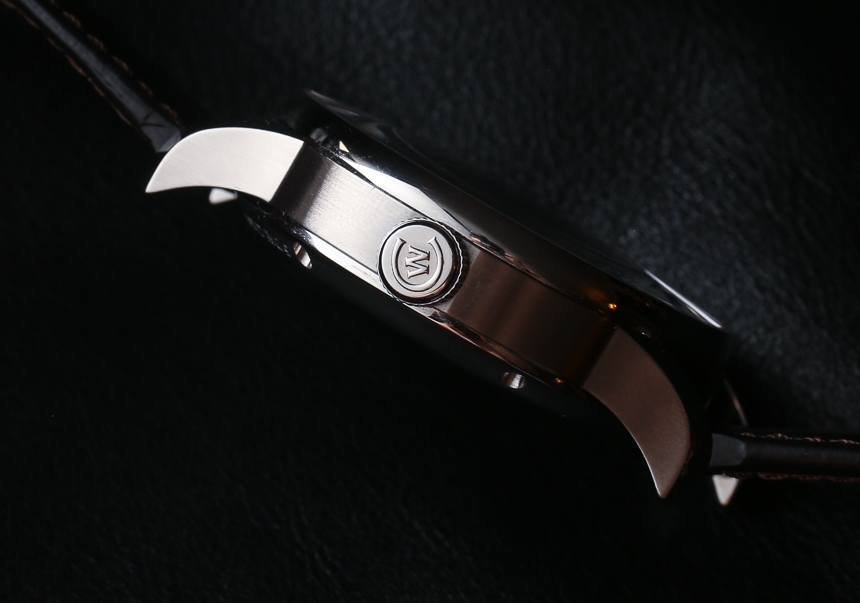 Even though the caliber SH21 movement is Swiss, Christopher Ward is British. For that reason, they decided to not finish the SH21 like a traditional Swiss movement. The bridges are mostly brushed but little details, such as machine-beveled edges, add a hint of flair to the otherwise intentionally industrial design. I inquired as to what a movement like this lacks that a much high-end movement might have, and we had a nice discussion about that. The short of the story is that with a high-end movement from a Swiss brand, you’ll probably get a lot of hand-finishing and more decorative parts, but for the most part, there aren’t any major features lacking in the SH21. Overall, Christopher Ward has a pretty serious contender.

Overall I am pretty happy with the SH21 movement and thrilled to see a quality movement at a price that doesn’t feel like another luxury company is stiffing me. So let’s get back to talking about the Christopher Ward C9 Harrison 5-Day Automatic watch itself. Sized at 43mm wide in steel, the C9 Harrison is a handsome timepiece with what is easily Christopher Ward’s best case design. 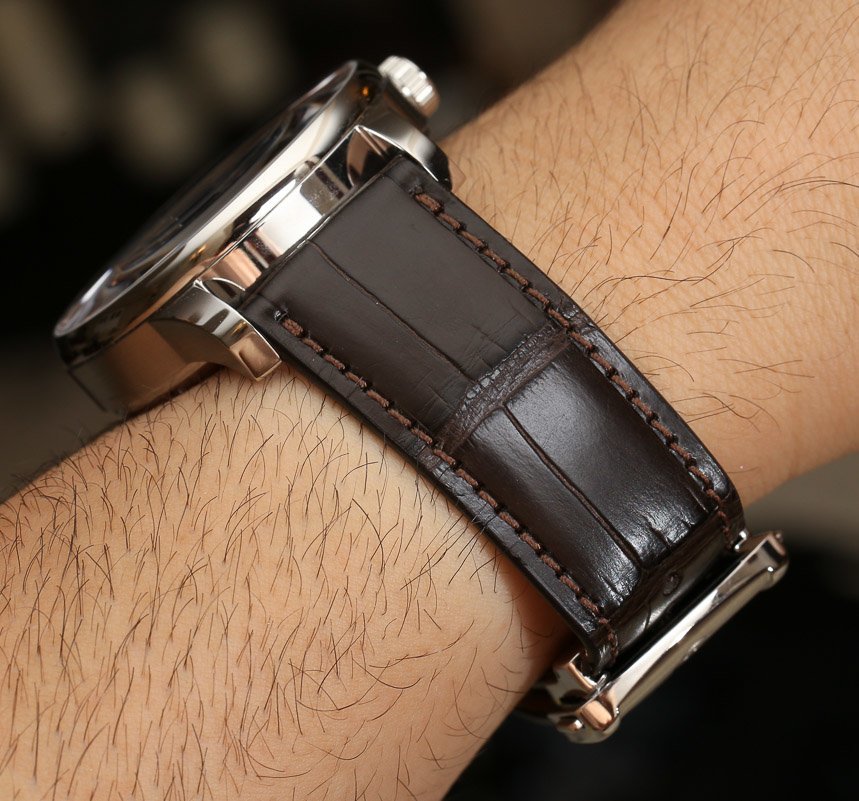