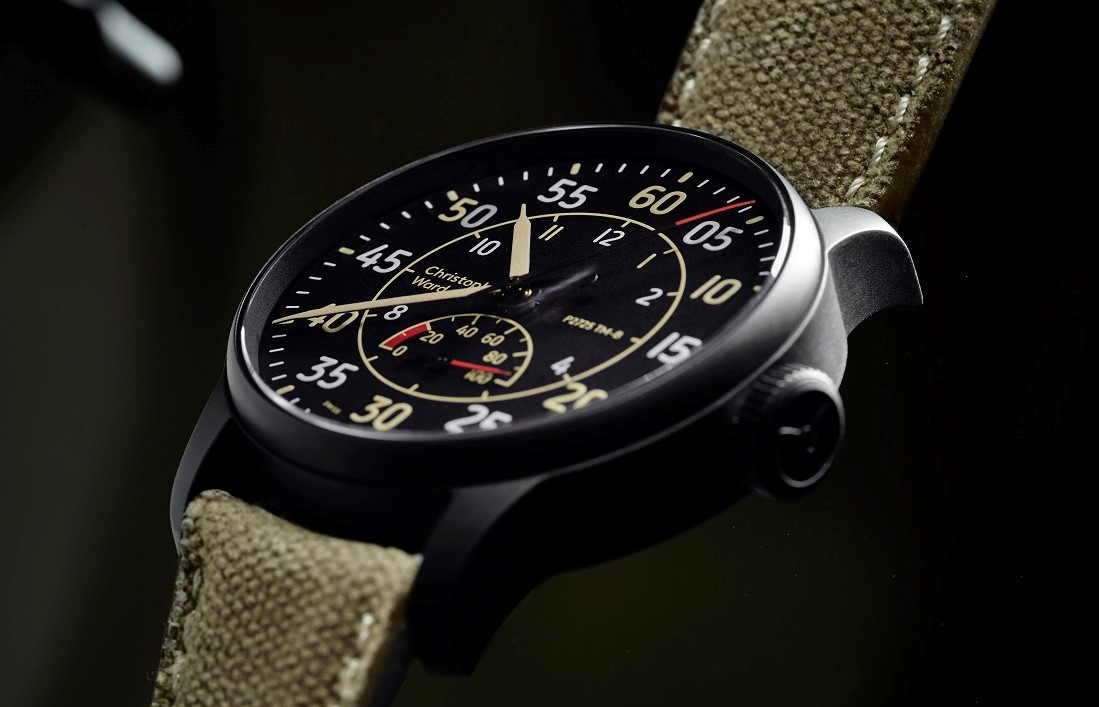 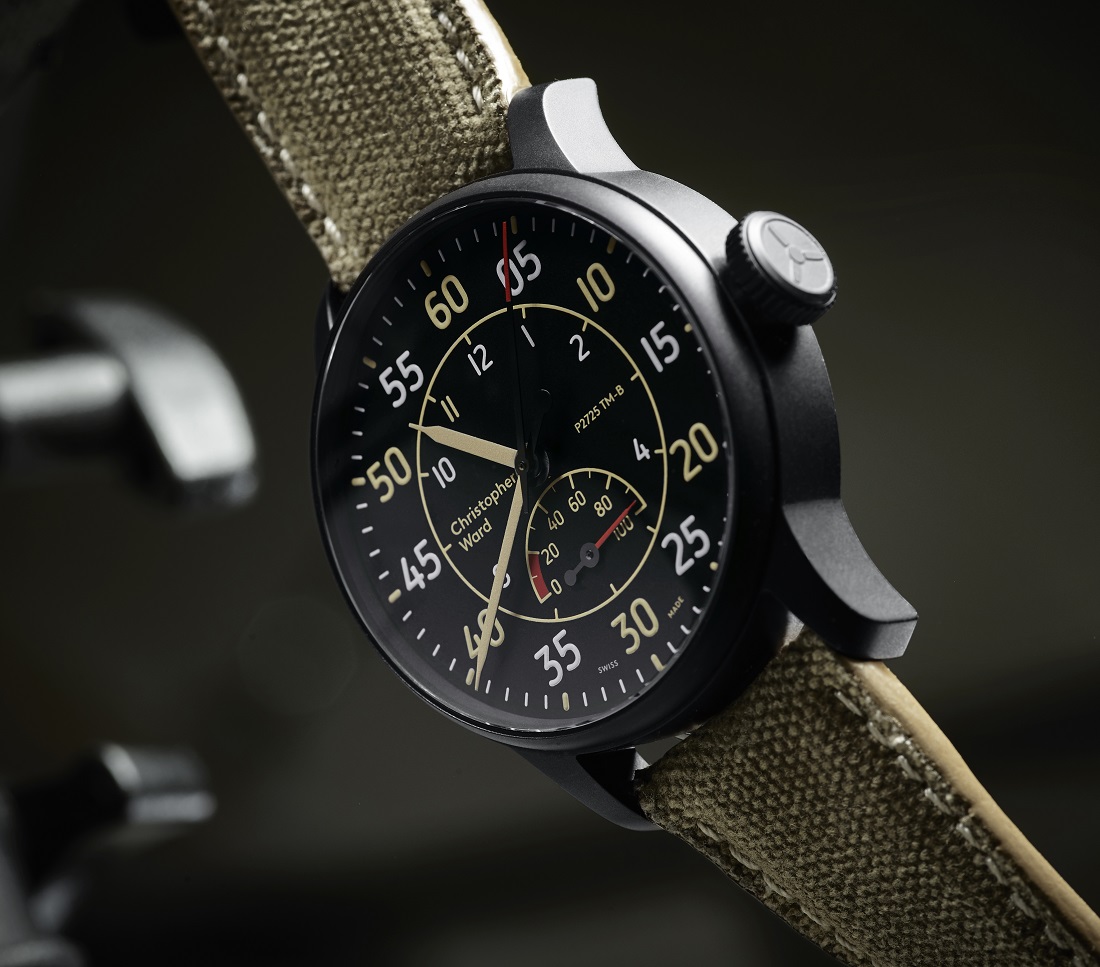 World War II buffs will love the symbolism behind the new RAF Limited Edition by British watchmaker Christopher Ward. The series of 100 watches commemorates the 100th anniversary of the British Royal Air Force by incorporating metal from the downed aircraft that heroically defended a raid on Buckingham Palace in 1940 in what is known as the Battle of Britain. The Christopher Ward C9 P2725 TM-B Limited Edition of 100 pieces is now available directly through Christopher Ward. 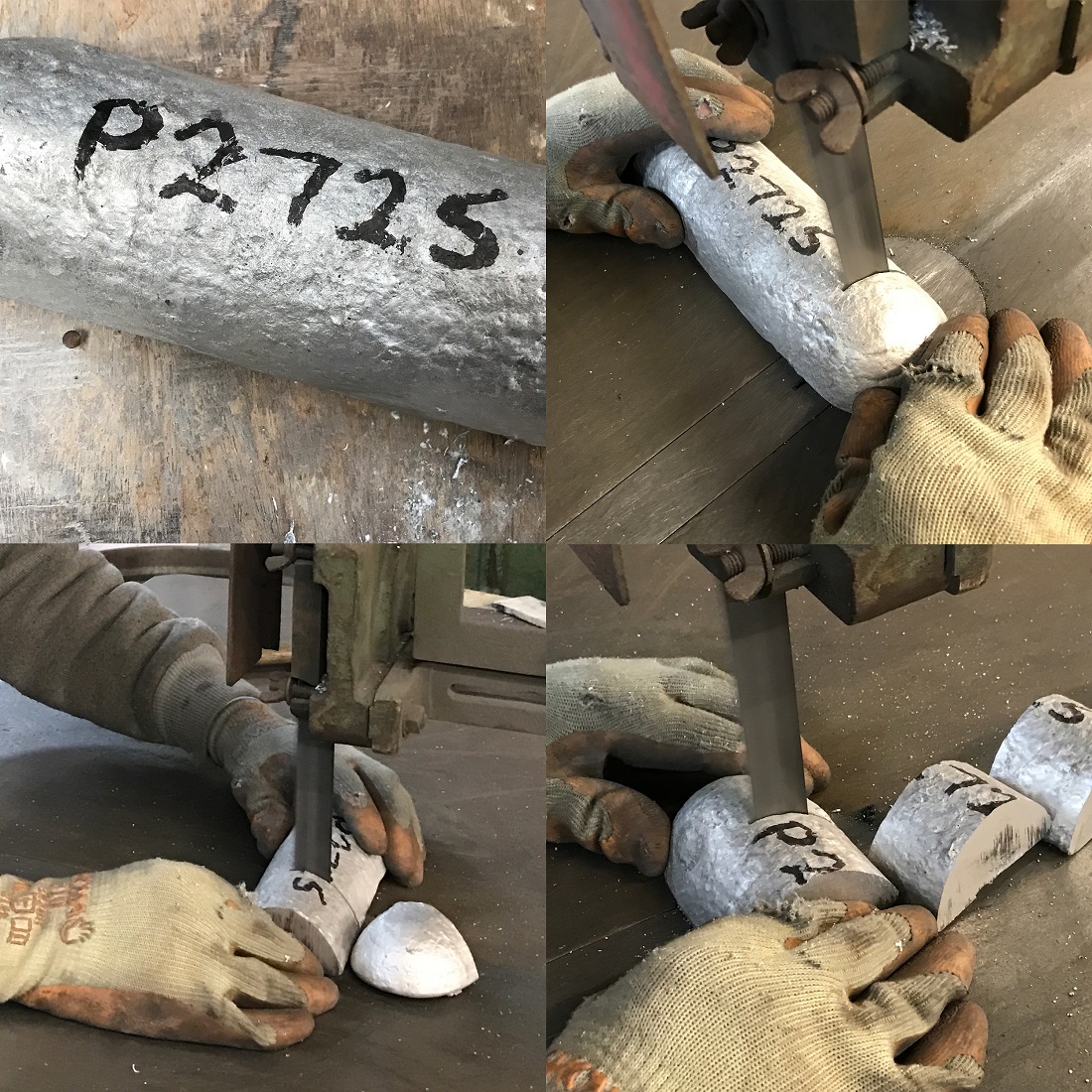 The commemorative element is a 0.8mm thick aluminum plate that was made from the remnants of the piston of the Hurricane fighter plane C9 P2725 that went down while saving the country. It is attached to the back of each watch, but you can’t actually touch it – it’s covered by a sapphire crystal, the kind used by museums to protect valuable exhibits. The C9 P2725 was flown by RAF pilot Flight Lieutenant Ray Holmes who was part of a squadron that intercepted a massed raid on central London by German Dornier bombers during the Battle of Britain, on September 15, 1940. Holmes noticed an enemy raider heading in the direction of Buckingham Palace, but he was out of ammunition, so instead, he rammed his Hurricane into the German bomber, slicing through the fuselage with his wing and forcing it to crash-land on the forecourt of Victoria railway station. Holmes’ Hurricane was wrecked in the process, and after he safely bailed out, the plane nosed vertically downward, burying itself deep into the ground beneath Buckingham Palace Road. 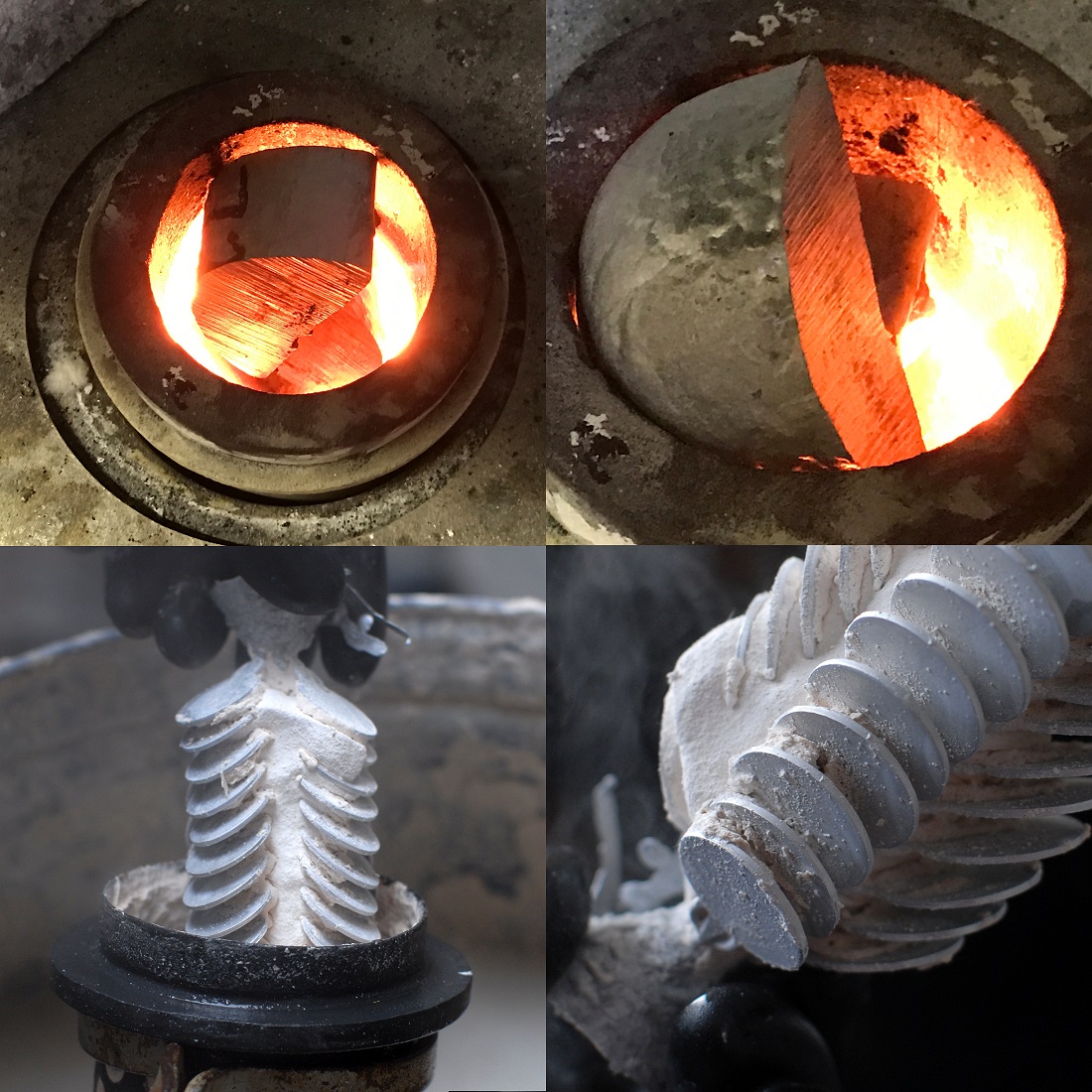 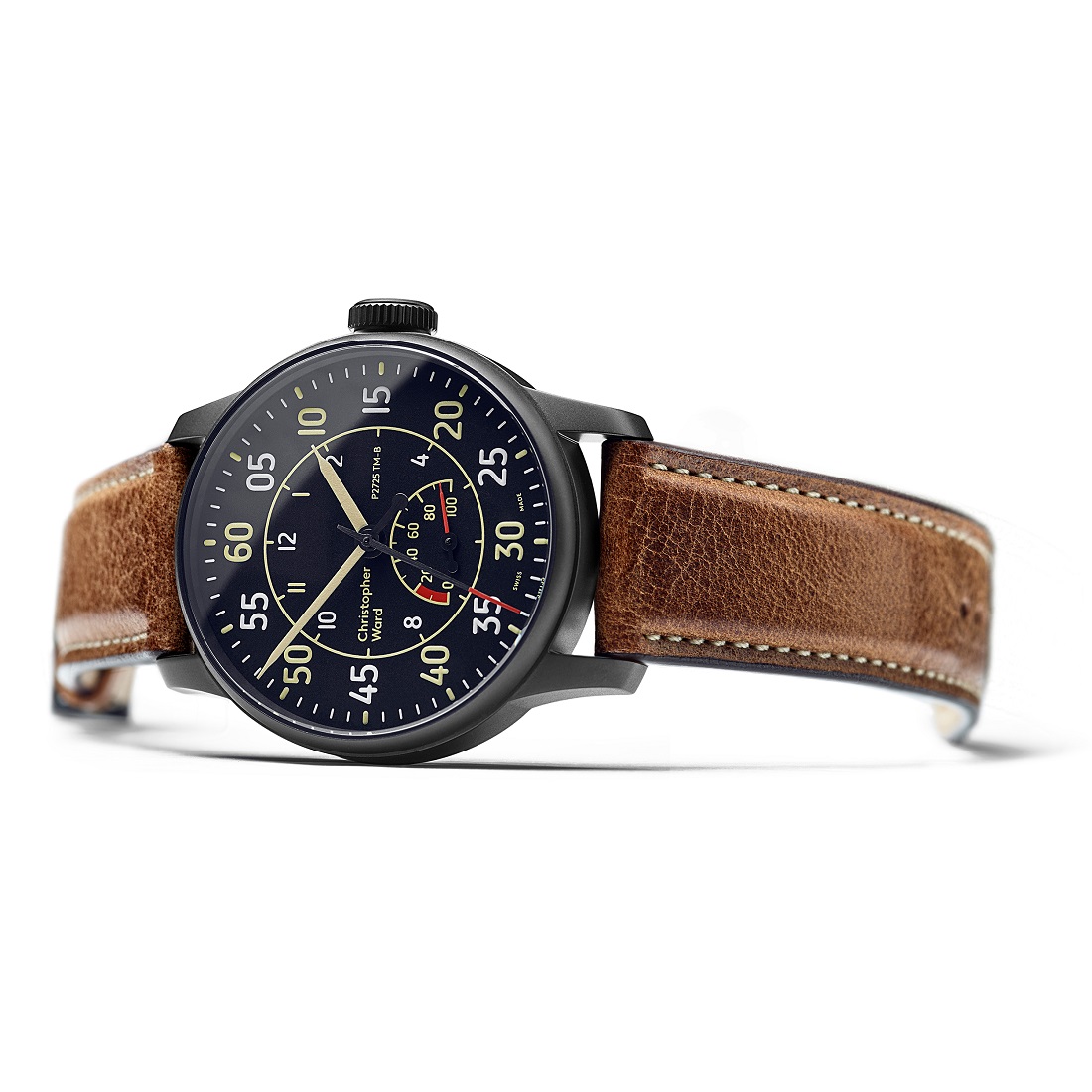 Ward says he was approached by TMB Art Metal, a company that excavates historical crash sites (you can get cuff links made out of the rudder of the Concorde), to offer him some of the aluminum from the wreckage of the Hurricane, which they salvaged. “When Chris Bennett, from TMB Art Metal put the disfigured piston of Hurricane P2725 TM-B’s engine on my desk, the hairs on my neck stood on end,” says Ward. “I knew immediately we would find the right moment to incorporate the historic metal into a watch. The RAF’s centenary in 2018 is that moment, and we are proud and privileged to mark this momentous year in such a unique way.” 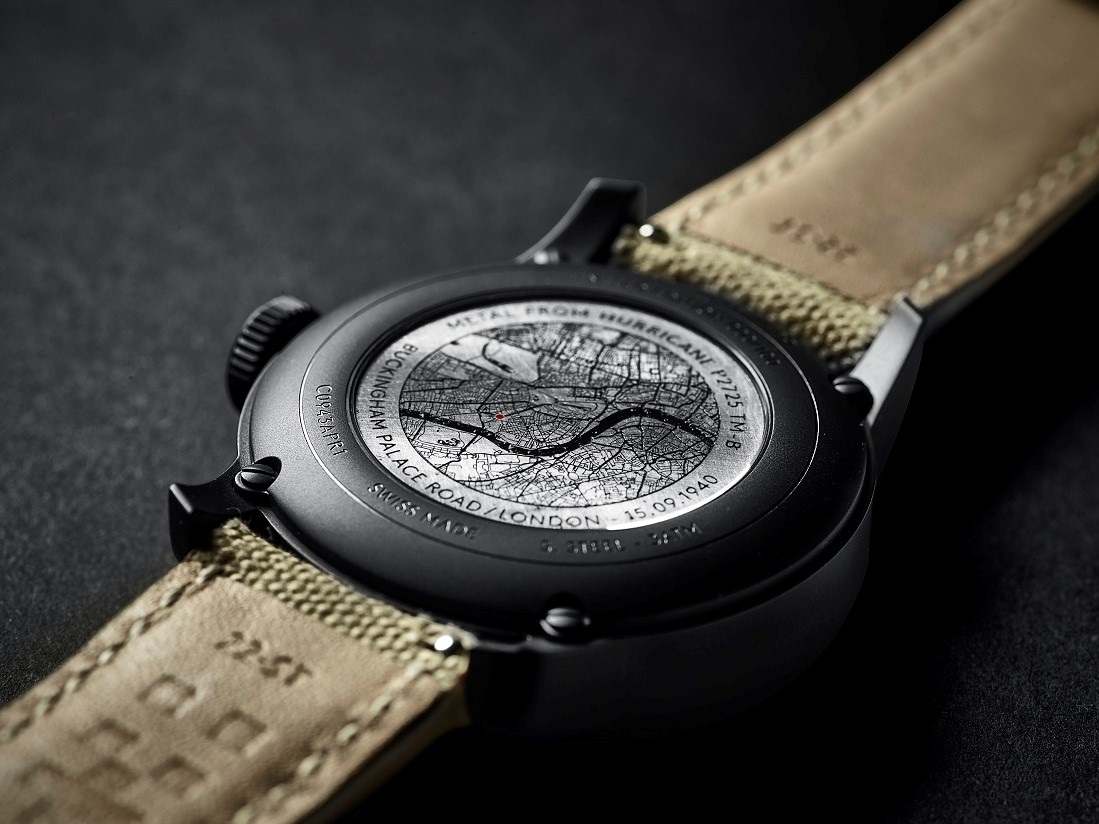 The metal on the case back was salvaged from the piston of the Hurricane’s Rolls Royce Merlin engine. Ward finished the metal for use in the watches. It was treated, hand-brushed and laser-engraved with a map of central London, with a red dot identifying the crash site, and inscribed with the location and date of the Battle of Britain. The dial of the watch is inspired by the Hurricane’s dashboard instrument panel, with a matte black background contrasted by alternating white and old radium (a color of Super-LumiNova) numerals in a vintage inspired sans-serif font. The hands and logo are also in old radium, giving the watch a true vintage look. 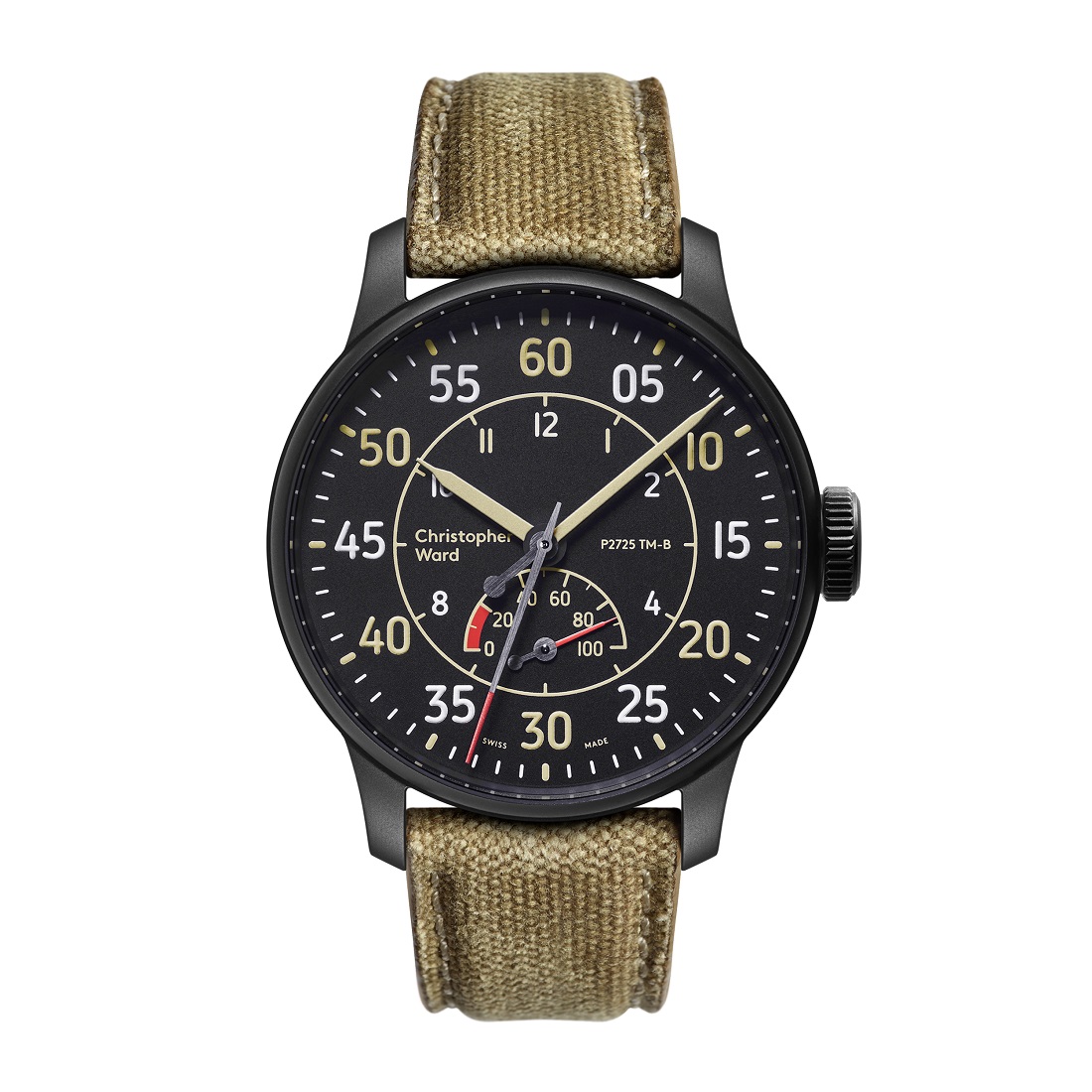 Although Christopher Ward makes its own in-house mechanical movement, this watch contains the automatic ETA Valgranges A07.161, with a 46-hour power reserve. The plane’s call sign, which is P2725 TM-B, is printed in old radium at 3 o’clock on the dial. The power reserve indicator, at 6 o’clock on the dial, is meant to evoke a fuel gauge, with a red needle indicator. The seconds hand is tipped in red, and the minutes hand counterbalance is a black dot. The case is large but not oversized – it’s a comfortable 43mm wide and 15.1mm thick, and is made of DLC sandblasted stainless steel. Each is engraved with its unique serial number. The watch is water resistant to 30m. The strap is a premium quality canvas webbing with the Christopher Ward twin flag logo. There is an additional camel vintage oak leather strap included. Each watch comes in a presentation case with an owner’s handbook and a signed certificate of provenance. It is priced at $2,850, and can be ordered at their official site. christopherward.com