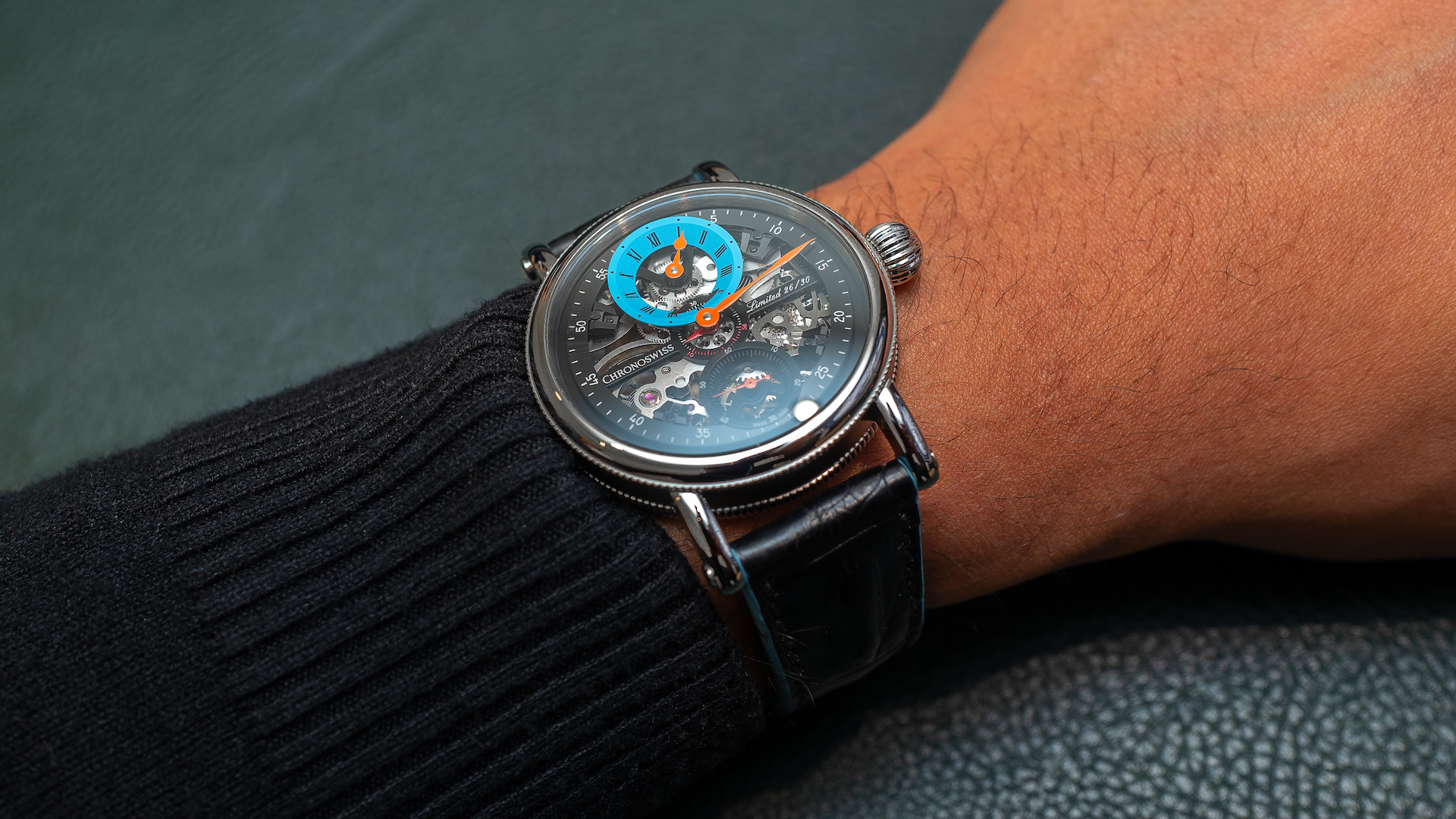 Chronoswiss has always occupied a niche space in the watch world, with its regulators always bringing particular attention to the brand. For 2019, it released a handful of versions of the Flying Grand Regulator Skeleton watch, limited to 30 pieces each. The model I was drawn to is this ref. CH-6723S-BKLB with blue and orange accents, though there are also versions with red and yellow accents. Personally, there’s something about the blue that I find a little more fresh, and I’d actually love to see a version with a matching embossed calf-leather strap that Chronoswiss uses on some of its Regulator Classic models. 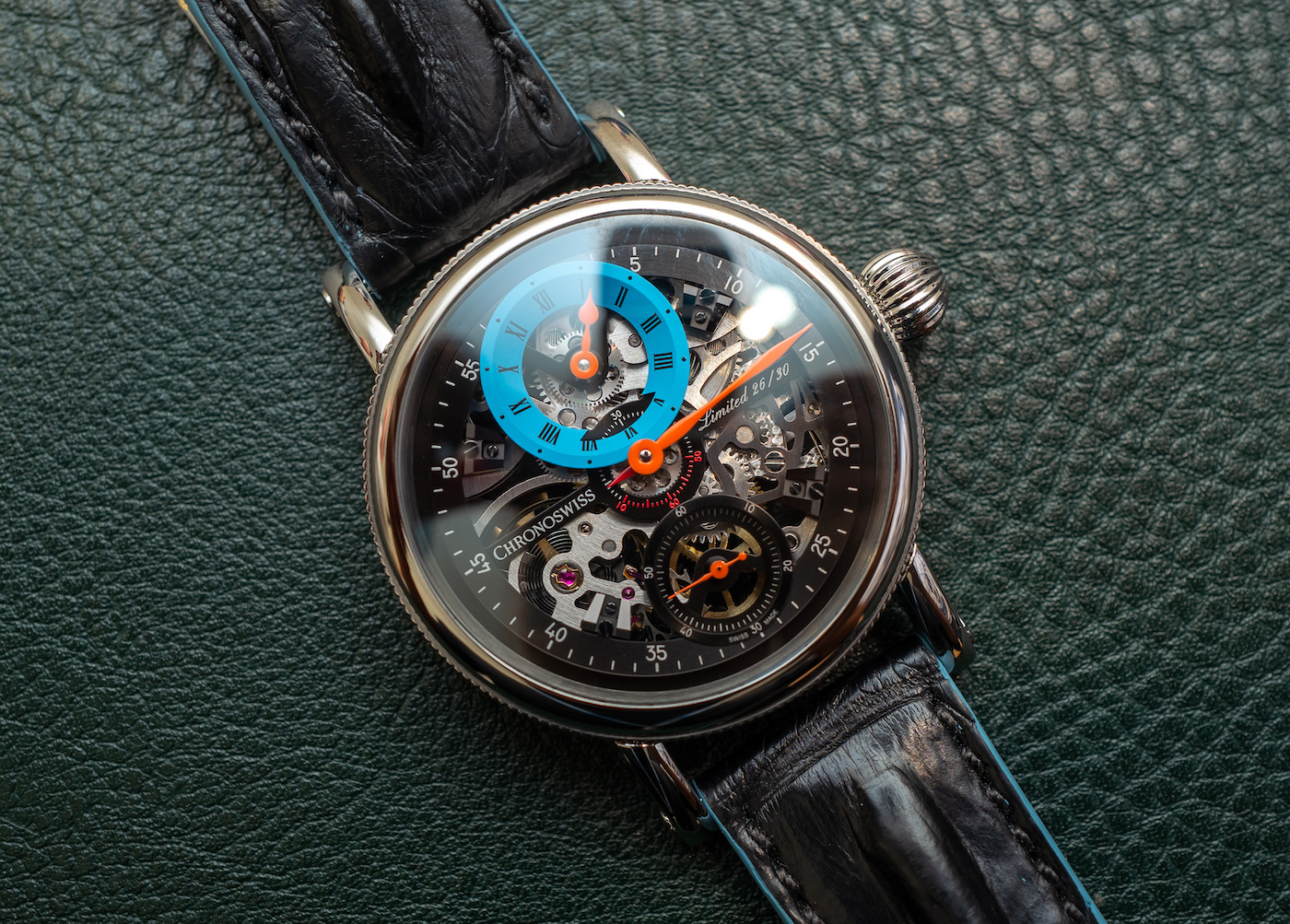 For anyone unfamiliar with the concept, regulator watches essentially separate the hour, minute, and seconds onto different axes. This allows for highly precise time setting, though nowadays it’s more of an aesthetic signature. This is especially true for Chronoswiss, which is most characterized by the regulator and was the first watch brand to create a Regulator watch collection. 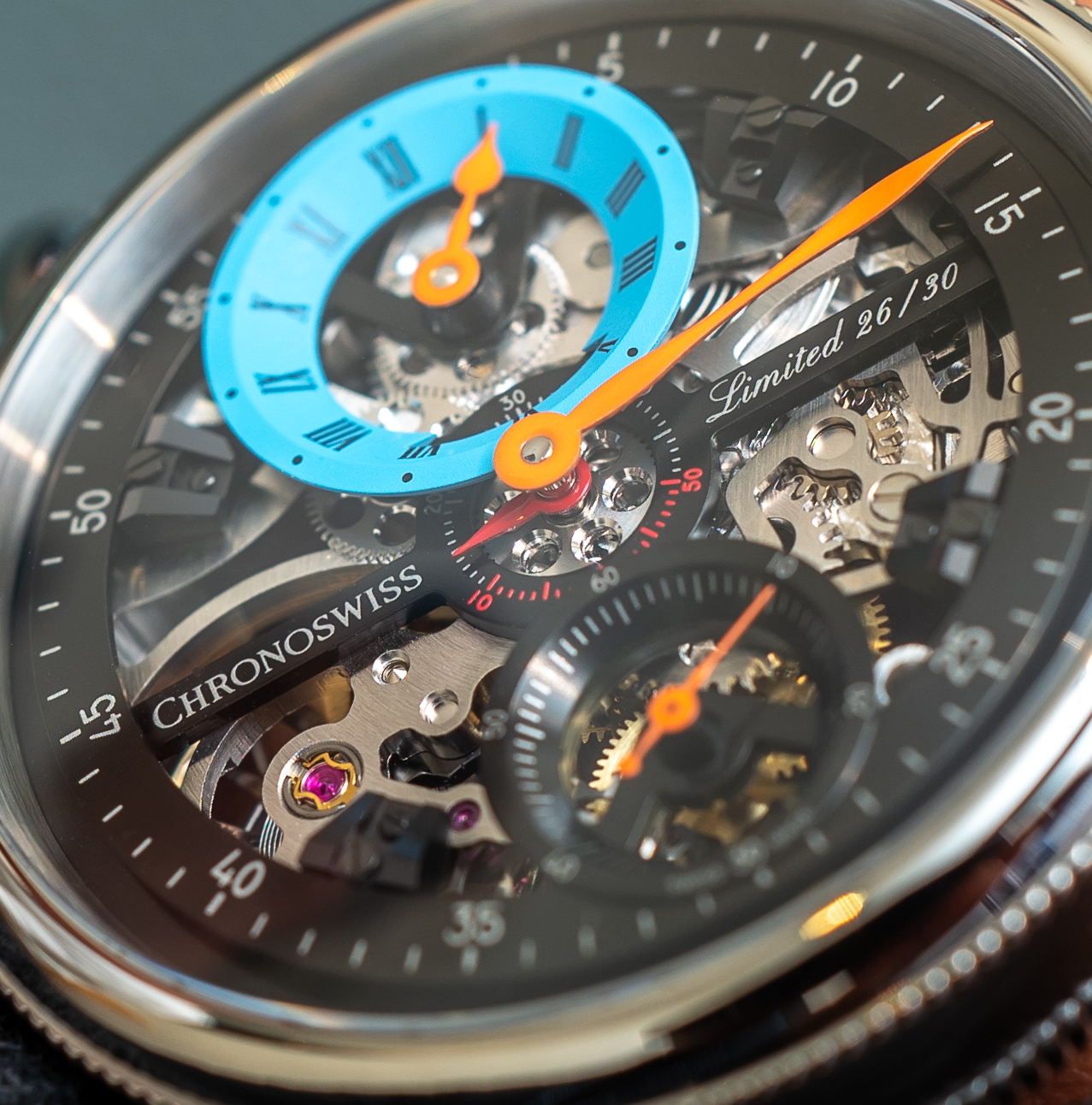 In this Flying Grand Regulator Skeleton watch, you’ll see the central minute hand, with the hour sub-dial at 12 o’clock and seconds sub-dial at 6 o’clock. The Poire Stuart-style hands are all done in this highly legible orange color that easily contrasts against the skeletonized dial background. The sub-dials are done in a “funnel” style that slopes inward and creates a nice three-dimensionality to the dial. 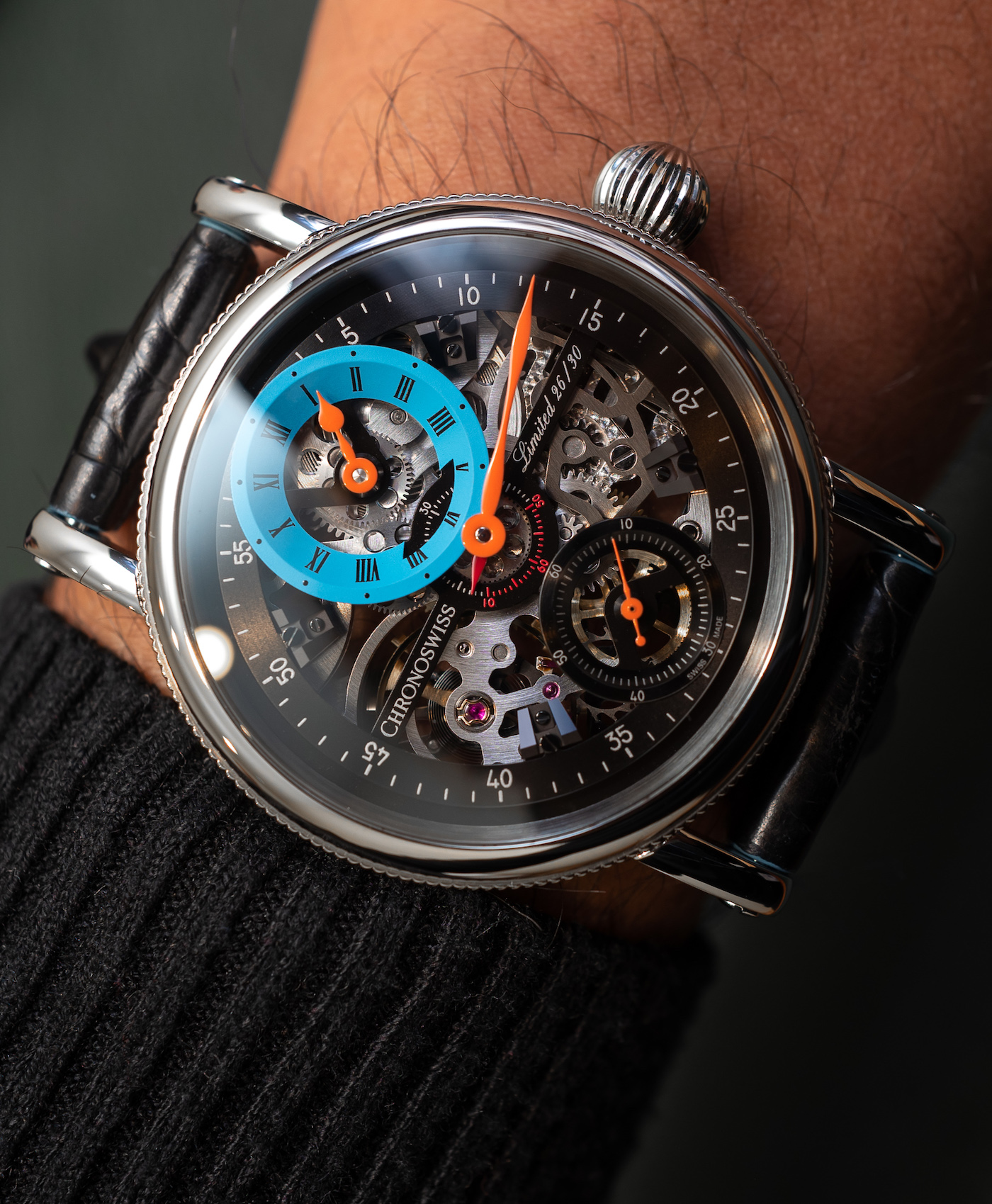 On the topic of the dial, I am sure I’m not alone in wishing that Chronoswiss had moved the “Limited XX/30” text at 3 o’clock to somewhere on the back of the dial. I understand the desire for symmetry when it comes to the dial text, but I would even put just something like “Regulator” there. It’s a small complaint, as far as they go. 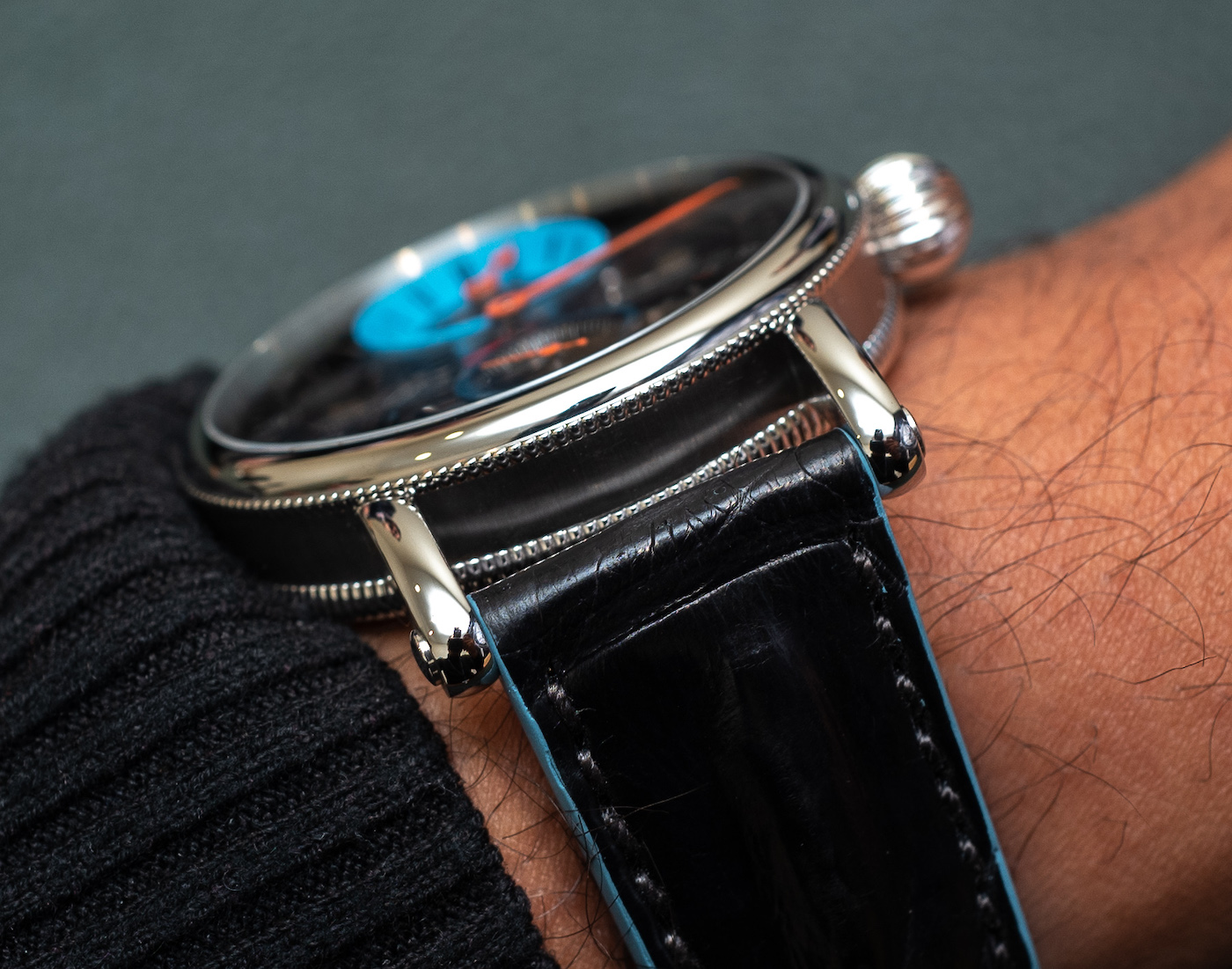 The long, straight lugs are characteristic of Chronoswiss, as is the thin bezel that leaves most of the real estate dedicated to the dial. However, the knurling done on the top and bottom of the 12.48mm-thick case adds the necessary refinement and visual flair. The large onion crown is likely to be a bit divisive, as I’m still not certain where I fall on it, personally. Aesthetics aside, I can attest that it does make getting a grip and setting the time much easier than most “traditional” crowns.

The 44mm-wide case wears larger due to those long lugs, and unfortunately, I wasn’t able to get a precise lug-to-lug measurement. The photos should give you a good impression of how large it wears on my 7.5 inch wrist. 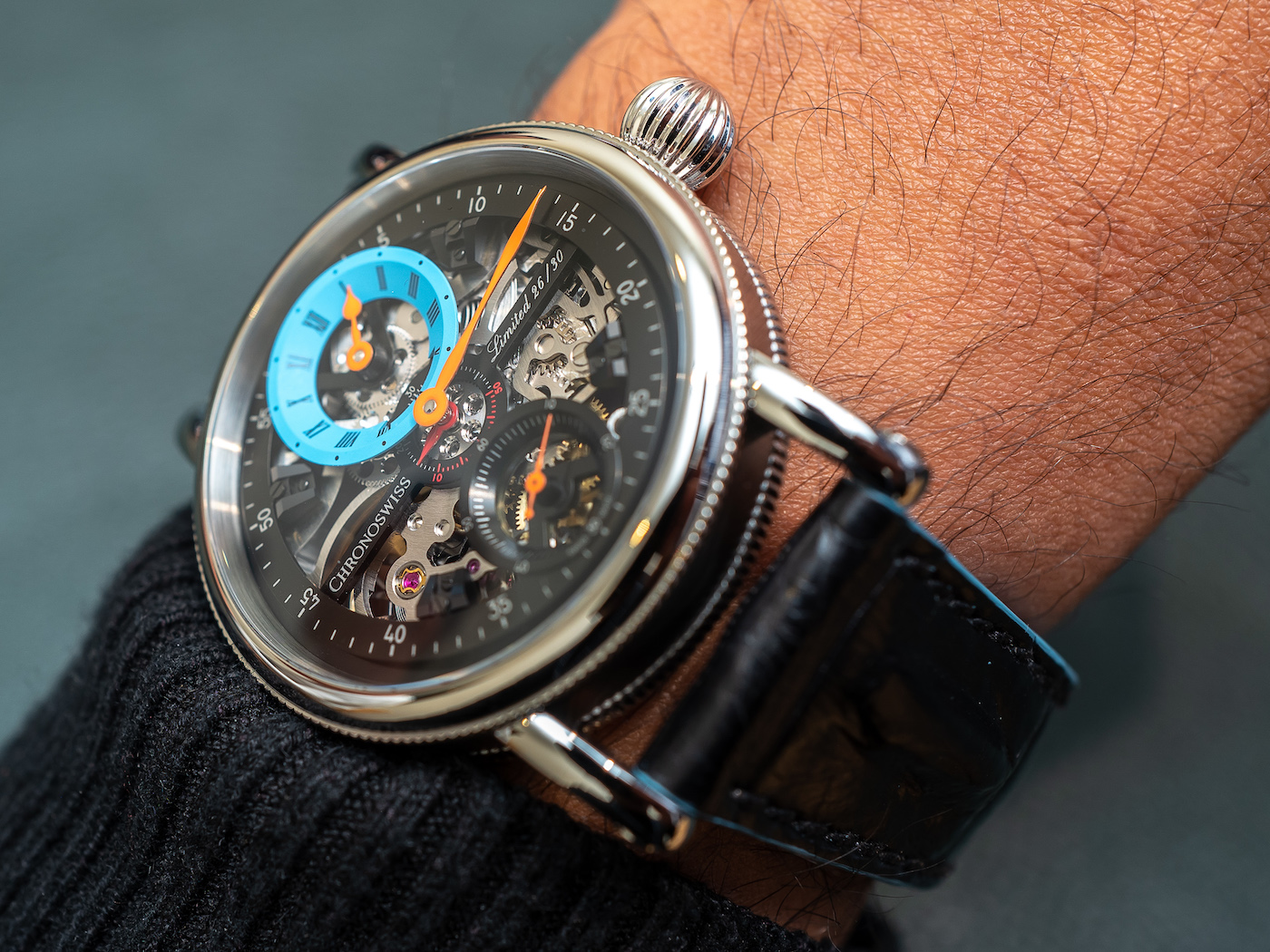 The skeletonized part of the dial is handsome enough, though I’ve found that opinions on skeletonized dials usually are either love or ambivalence, and I certainly fall into the latter category. Regulator-style watches are going to have busy dials that cover up a lof of the exposed movement, but the two “flanks” on the left and right sides of the dial allow for a proper skeletonized aesthetic. 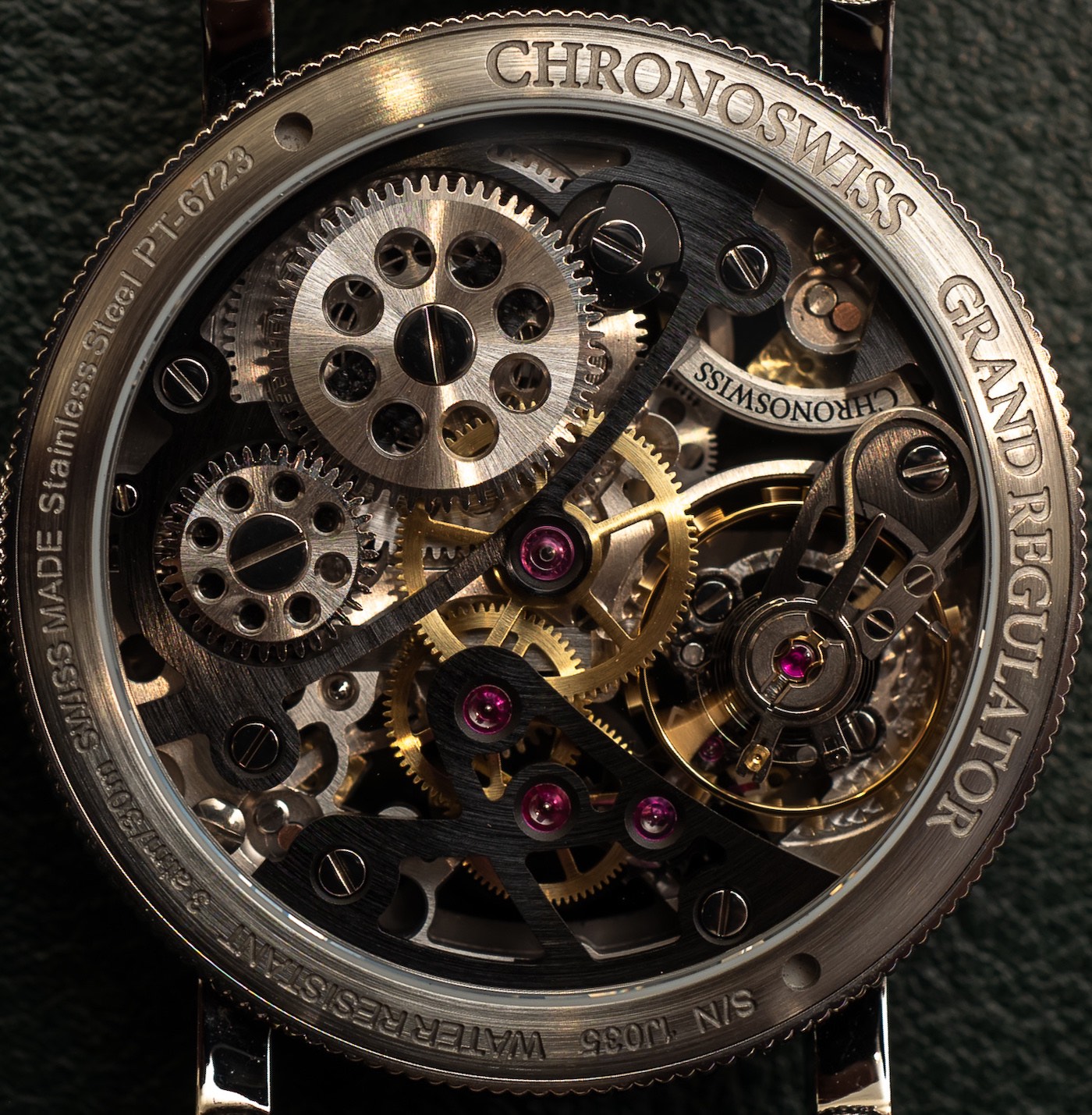 Turning the case around reveals the Caliber C.677S movement, which is a modified Unitas 6498 movement. While this is a modified movement, Chronoswiss makes substantial changes in-house at their facility in Switzerland to make it so the manual-wind caliber tells time as a regulator. Operating at 18,800 vph, the C.677S has a 46-hour power reserve. Overall, it’s a handsome and thoughtfully finished movement that is visible through a large exhibition caseback. That’s worth mentioning because so many movements (even those made fully in-house) are simply too small for their cases and have an awkwardly small-sized exhibition window on the caseback. 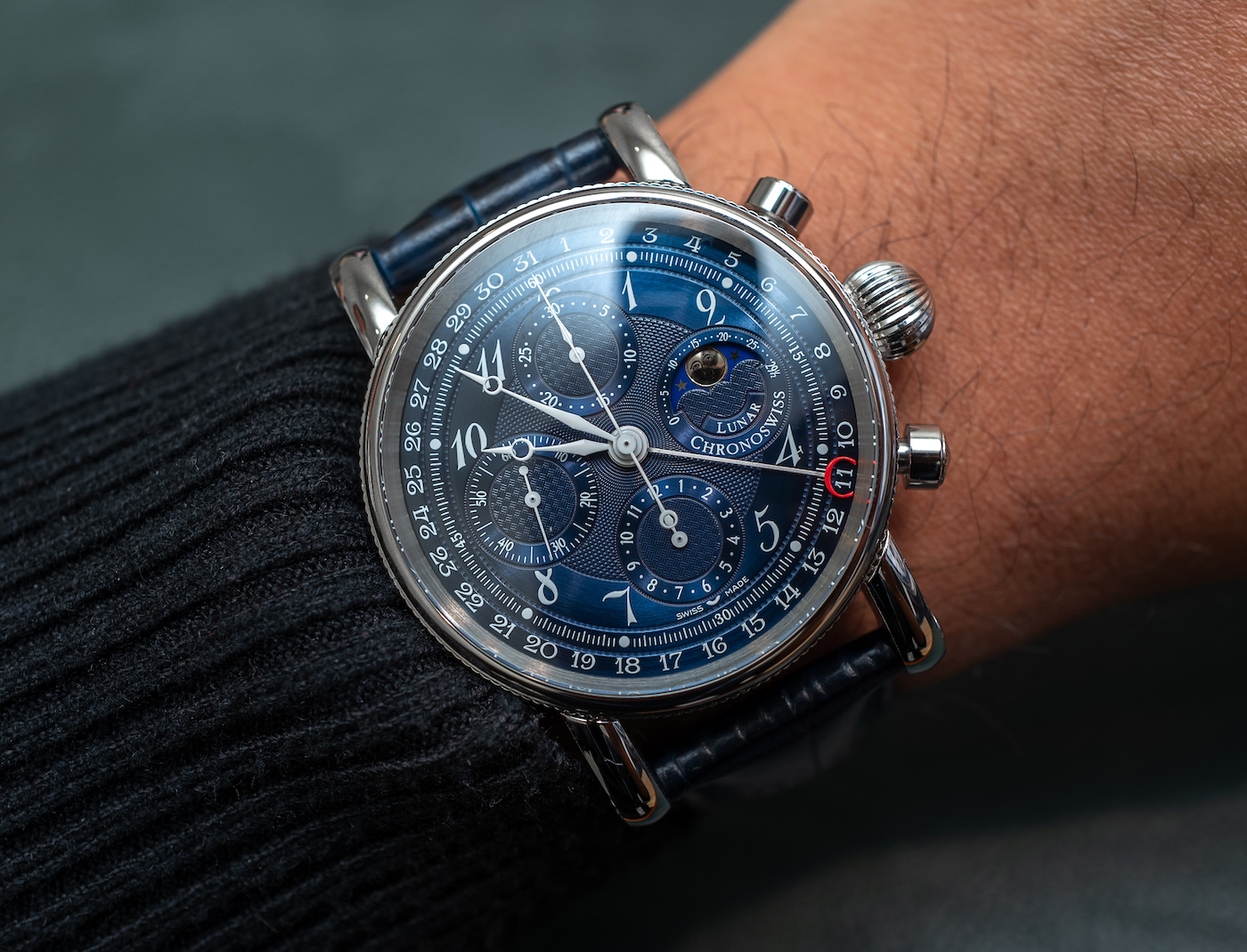 Chronoswiss is really doing some interesting things in the sub-$10,000 category. In fact, there was another piece of theirs that was introduced this year (that happens to be an existing model that utilizes blue) that I was really taken with, as well. A new blue variation of the existing Sirius Chronograph Moon Phase watch is the kind of highly complicated, not-at-all-casual, and ultimately curious watch that I can’t help but want to wear around quite a bit. The tradeoff of a modified ETA 7750 movement for exceptional case finishing and quality makes the $7,950 price tag of this piece an ultimately compelling proposition. 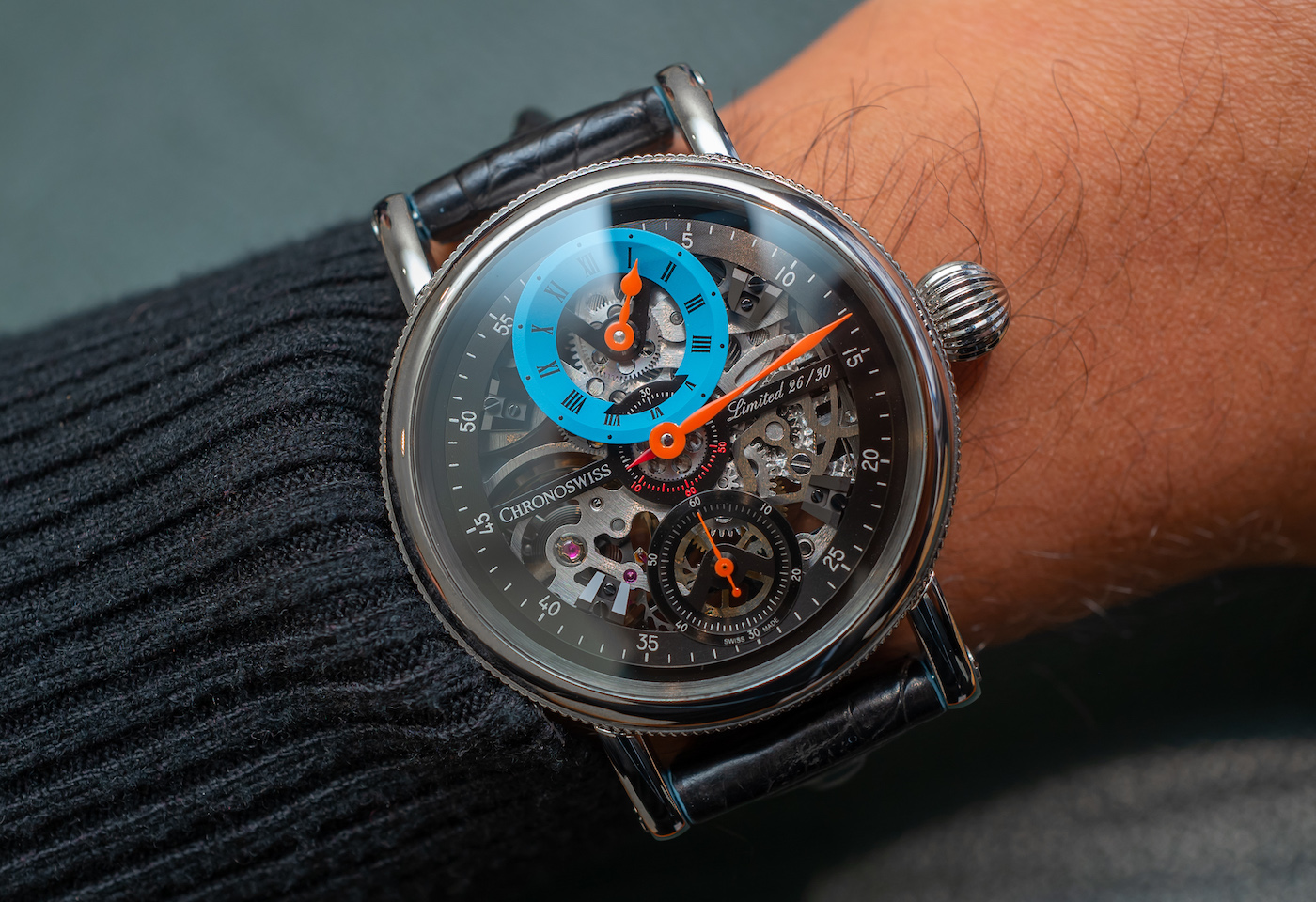 Both the Flying Grand Regulator Skeleton and the blue-dial Sirius Chronograph Moon Phase I briefly discussed above are coming to the market later this year. Chronoswiss has an e-commerce page (that I believe accepts Bitcoin) which should be carrying both watches soon enough. Price for the Chronoswiss Flying Grand Regulator Skeleton ref. CH-6723S-BKLB should be right around CHF 9,150. You can learn more at chronoswiss.com.