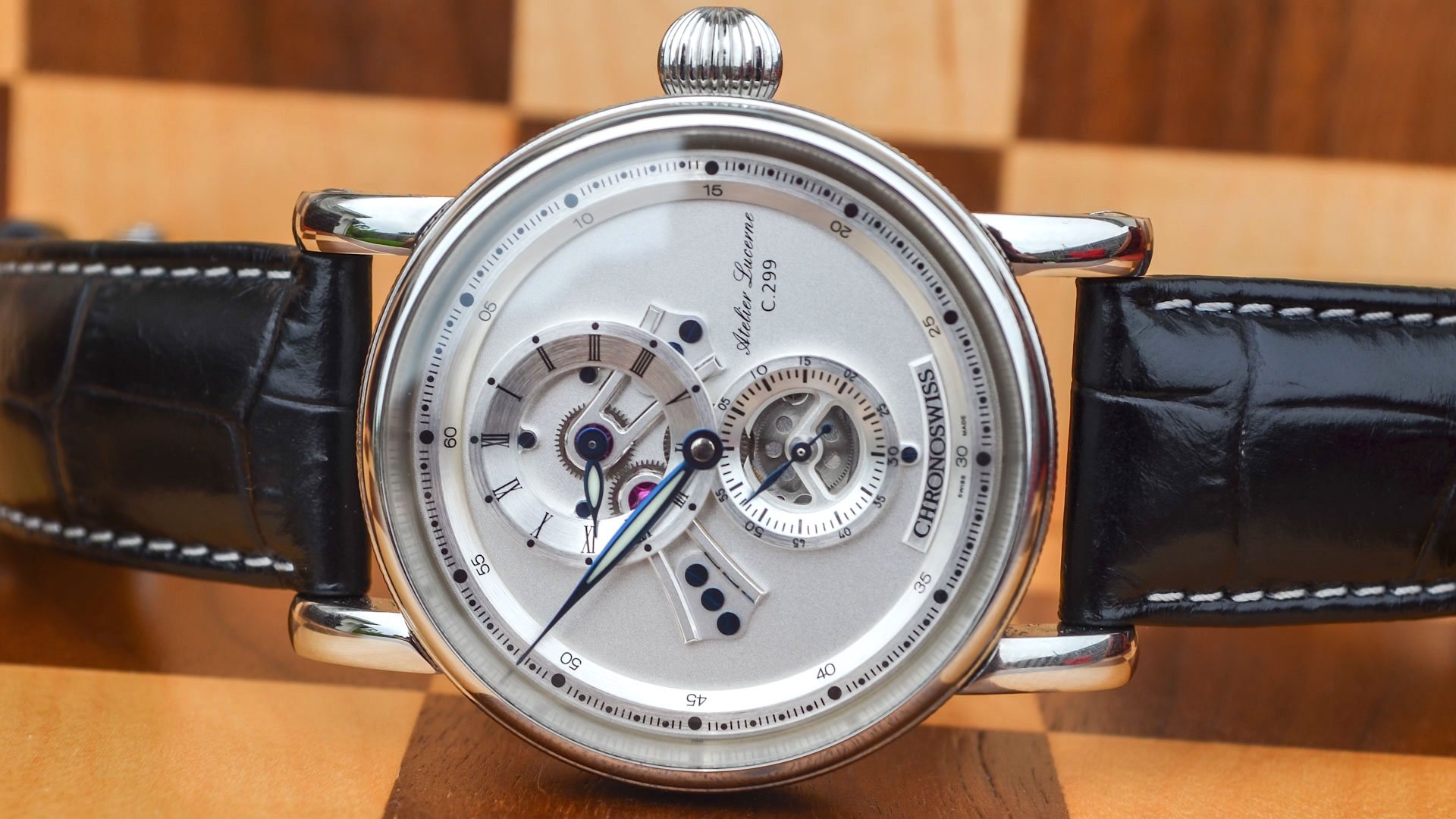 There’s nothing more compelling than a good comeback, and even more so when one happens in your industry. After a brief hiatus during the recession, Lucerne-based Chronoswiss has turned a new leaf under the Ebstein Family’s management. The brand has made a real effort in producing and re-vamping a number of models in their collections – and I haven’t been disappointed by a single one yet. New for 2018, Chronoswiss released a model to its Regulator collection called the Chronoswiss Flying Regulator Open Gear, or as I came to call it, the “Snowman,” for obvious reasons. The watch features a unique floating regulator-style dial and gear work on the movement specifically designed to be displayed above the dial plate. Chronoswiss is hands-down known for its Regulator style dials – they’ve built it into their identity. In fact, the brand is arguably one of the first brands to serially produce the design in a wristwatch. Regulator dials are a style of time-telling that separates the hours, minutes, and seconds into separate dials. Those are usually then stacked on top of each other to provide separate hands – typically with the hour on top, the minutes in the middle, and the seconds at the 6 o’ clock position. It may not be the most practical way of telling the time, but it’s fun and pretty simple to get the hang of quickly. Chronoswiss has taken the regulator indication and built it directly onto the dial plate, something that’s both visually intriguing, and unique to the complication. Let’s get the basics of the case out of the way, and then we can get into the not-so-basics because it is a unique design. The case measures in at 41mm x 13.85mm – making this watch relatively thick, despite its dressier appearance (more on that in a minute). The lugs are straight (think old Pilot watches) and attach to the thick space between the bezel and the caseback. The watch features a domed sapphire crystal and an oversized onion crown that is by and large a staple in most Chronoswiss models. It was easy to use, hardly in the way, and with the mirror polished finishing, fun to look at too. Additionally, the watch features a whopping 100m of water resistance – something I would have hardly guessed based on the style of watch. The case, both in shape and design, is quite unique in appearance. This is mostly due to the fact that the case is made of 16 components. When you’re talking about that many parts for a single case, it’s easy to lose uniformity to add complication – something I was afraid would be the case when reading about this watch before receiving it. The domed sapphire crystal is fixed to a polished bezel, which is then fluted (or knurled) at the bottom and attached to a vertical satin finished steel case. The caseback is also polished, knurled on the top edge, and attached to the same middle section of the case. That makes 4 different aesthetic textures that I found worked quite well together despite how busy it felt on paper. When looking straight on either the front or back of the watch, it’s polished and shiny. When looking at it with any kind of key-stoning, it looks almost matte with contrasting high-polished “rings” around the top and bottom of the case. This breaks up the aesthetics of the case but manages to remain harmonious altogether. My only gripe is that because the caseback plate extends further than the bottom of the case, occasionally some hair would get caught in the groove between the main case and the knurled edge.

Overall, the case was a major improvement on what I expected from the press images. Despite the many components, each worked well with each other, and there wasn’t anything that left me wanting. It sat flush, I wasn’t banging it on everything, and I wasn’t struggling to keep it at the top of my wrist – it was handsome and a comfortable wear. The star of this show, however, is the dial. Chronoswiss, to me, has long produced some of the best regulators on the market and the Flying Regulator Open Gear exceeded my expectations. Pour yourself another cup of coffee – I want to spend some time on this section because I feel it’s the most important part of the watch.

For some context, in 2016, Chronoswiss relaunched with what they call the “Flying Regulator” design that brought a 3D, floating look to the previously flat regulator dials – and really modernized the collection. The Flying Regulator dials are clever, albeit classic designs that remain versatile. Let’s start with the dial’s layout and break down each component. As with most regulator layouts, the hour sits at 12 o’ clock, the minute remains centered and follows a chapter ring on the outside edge of the dial, and the second’s subdial sits at the 6 o’clock position. Since this is a “flying” regulator, the two subdials are hollow, satin brushed, bowl-shaped, and lifted with mounts and bridges featuring heat blued screws that looked fantastic in the light. Visible through the center of each subdial, you can see where the watch gets its name and provides an insane sense of depth to the watch.

The second’s subdial sits the lowest, against the dial plate, and has lined indexes to display each tick of the seconds hand. It sits prominently over a bridge containing the seconds wheel. I’m embarrassed to admit how much time I spent watching (and listening, because when you hold it up to your ear, it’s quite loud) the seconds wheel through the petite aperture of the subdial. Due to the blue hands, it wasn’t difficult to pick the seconds out, despite the busy nature of the open gear and bridges and the relative thinness of the second hand. The centered minute hand sits at the 6 o’ clock position of the hours subdial and follows indicators at the outside perimeter of the dial. One thing that I noticed and appreciated immediately was the finishing of the chapter ring. While the chapter ring itself isn’t floating, the angles of the definitive brush finishing give it that appearance. Originally, I thought if it had been the same bowl shape of the subdials, it would give it some extra pop. However, in the flesh, the satin finish on the top without a break on the edges allows it to play some really cool games with different lighting. For instance, when looking at it straight on, the edge looks like a darker, almost PVD finish. Twist the watch a little to catch the light, and the satin finish becomes blatantly apparent to match the subdials. Twist the watch a little more, and the ring washes out and looks like it’s glowing.