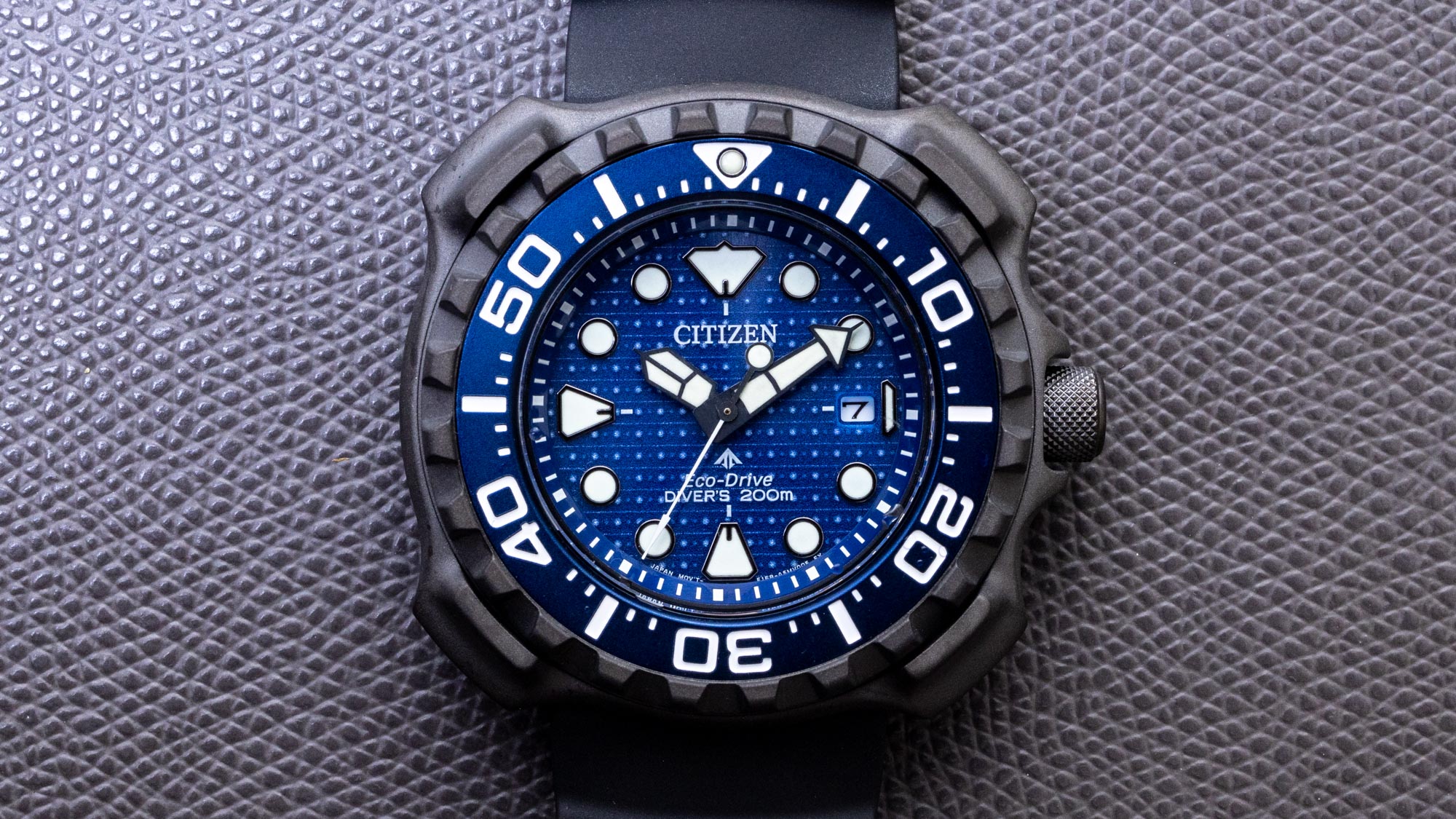 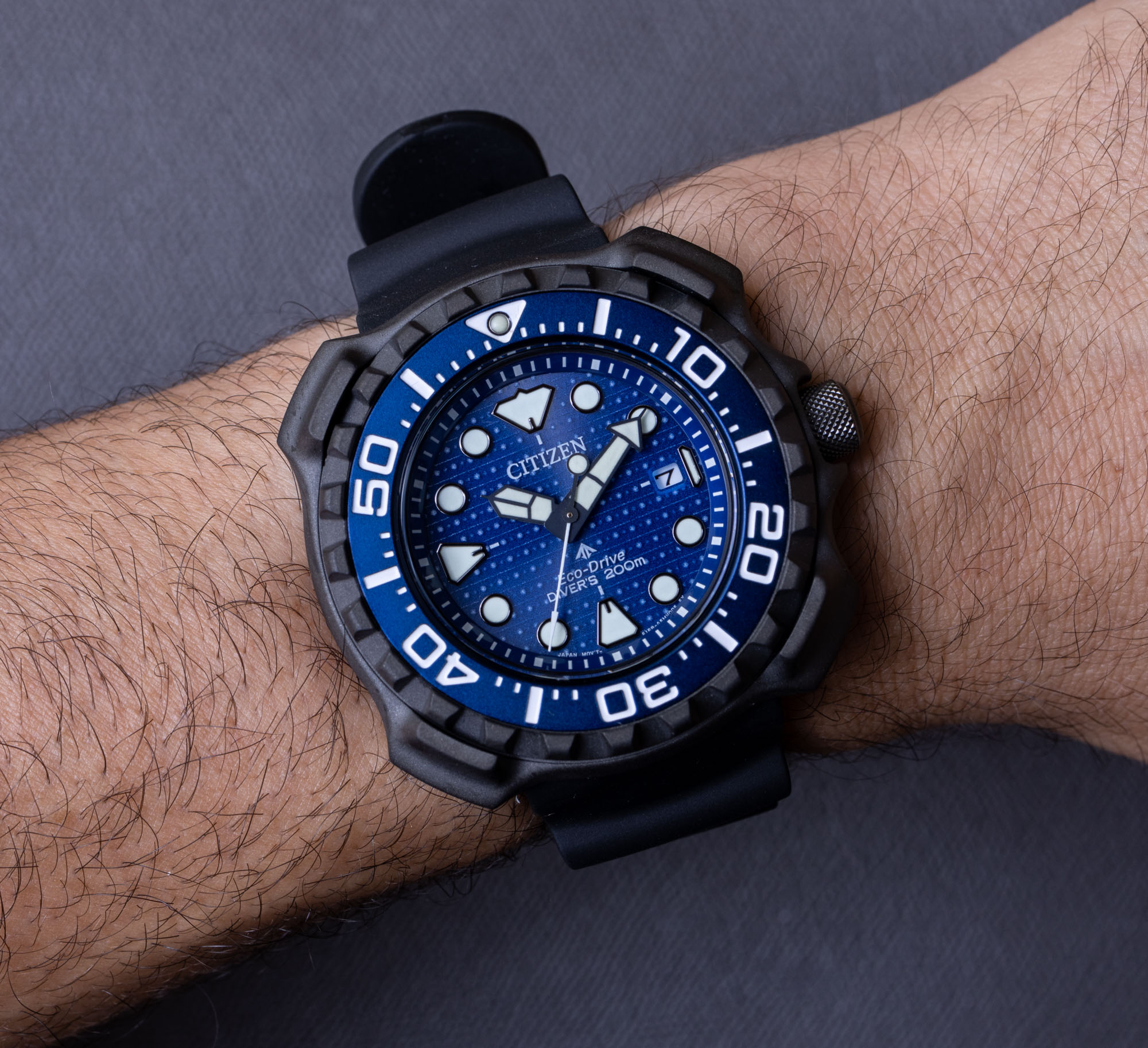 Despite being the largest fish on Earth, the whale shark remains largely enigmatic to the scientific community. These slow-moving, peaceful animals can grow up to 50 feet in length, and frequent warm tropical oceans worldwide as they filter feed on microscopic plankton. Because these massive creatures rely on oceanic plankton populations to survive, marine biologists often use whale shark populations to gauge the health of ocean ecosystems. With this in mind, the whale shark’s introduction to the endangered species list in 2016 was an ominous sign, but Citizen has emerged as a powerful force for preserving these majestic animals.Working in partnership with international NGO Conservation International, Citizen supports marine conservation efforts, raising awareness about the importance of whale sharks, and at the forefront of this effort is the unique Citizen Eco-Drive Diver 200m Limited Edition Whale Shark BN0225-04L. With a design that combines the dramatic looks of the pioneering 1982 Citizen Professional Diver with rock-solid construction, an innovative Eco-Drive movement, and handsome visual cues inspired by the whale shark, this new Citizen dive watch is a truly one-of-a-kind tribute to the beauty and fragility of the world’s oceans. 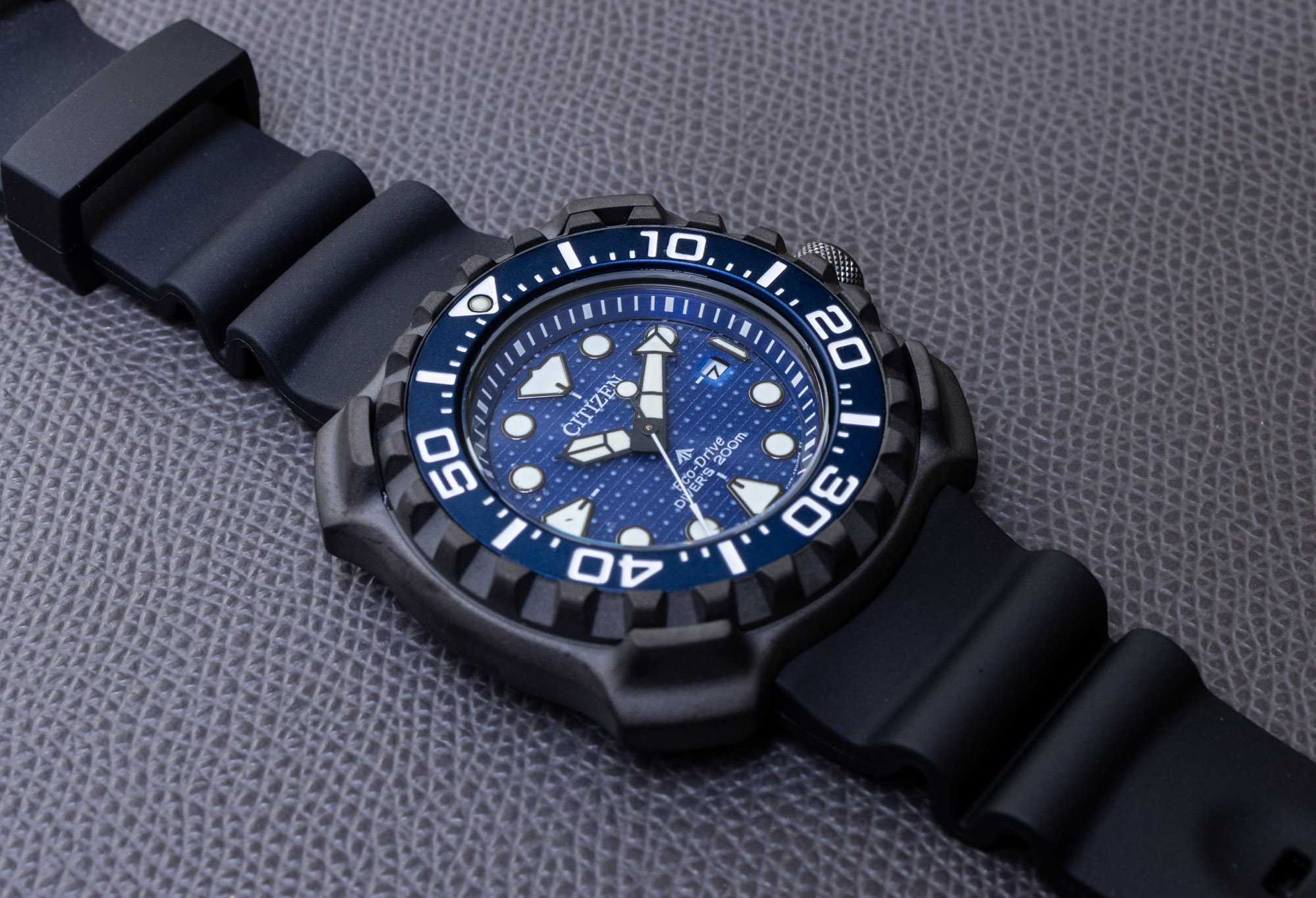 The unmistakable silhouette of the Citizen Eco-Drive Diver 200m Limited Edition Whale Shark BN0225-04L’s case is a Citizen hallmark, dating back to the record-breaking Citizen Professional Diver which became the first dive watch to sport a 1,300-meter depth rating in 1982. This muscular, lugless design measures in at a bold yet manageable 45.8mm-wide and 14.3mm-thick, with impressive wearability thanks to its compact overall length and lightweight construction. The four squared-off bezel guards at 2 o’clock, 4 o’clock, 8 o’clock, and 10 o’clock give the Eco-Drive Diver 200m Limited Edition Whale Shark BN0225-04L an intriguing mix of organic and industrial visual cues, which continue through the softly rounded case sides and the aggressively toothed dive bezel. Citizen gives this heavy-duty diver design an even more purposeful look through its proprietary Super Titanium case material, which is further treated with Duratect MRK and Duratect DLC for immense scratch and impact resistance. The aggressive matte black finish is an added benefit, contrasting handsomely with the deep oceanic blue of the bezel insert for a powerful, masculine look. The solid caseback is adorned with a finely detailed engraving of a whale shark, showcasing the unique pebbled texture of the shark’s skin. Citizen guarantees the watch for a dive-ready 200 meters of water resistance. 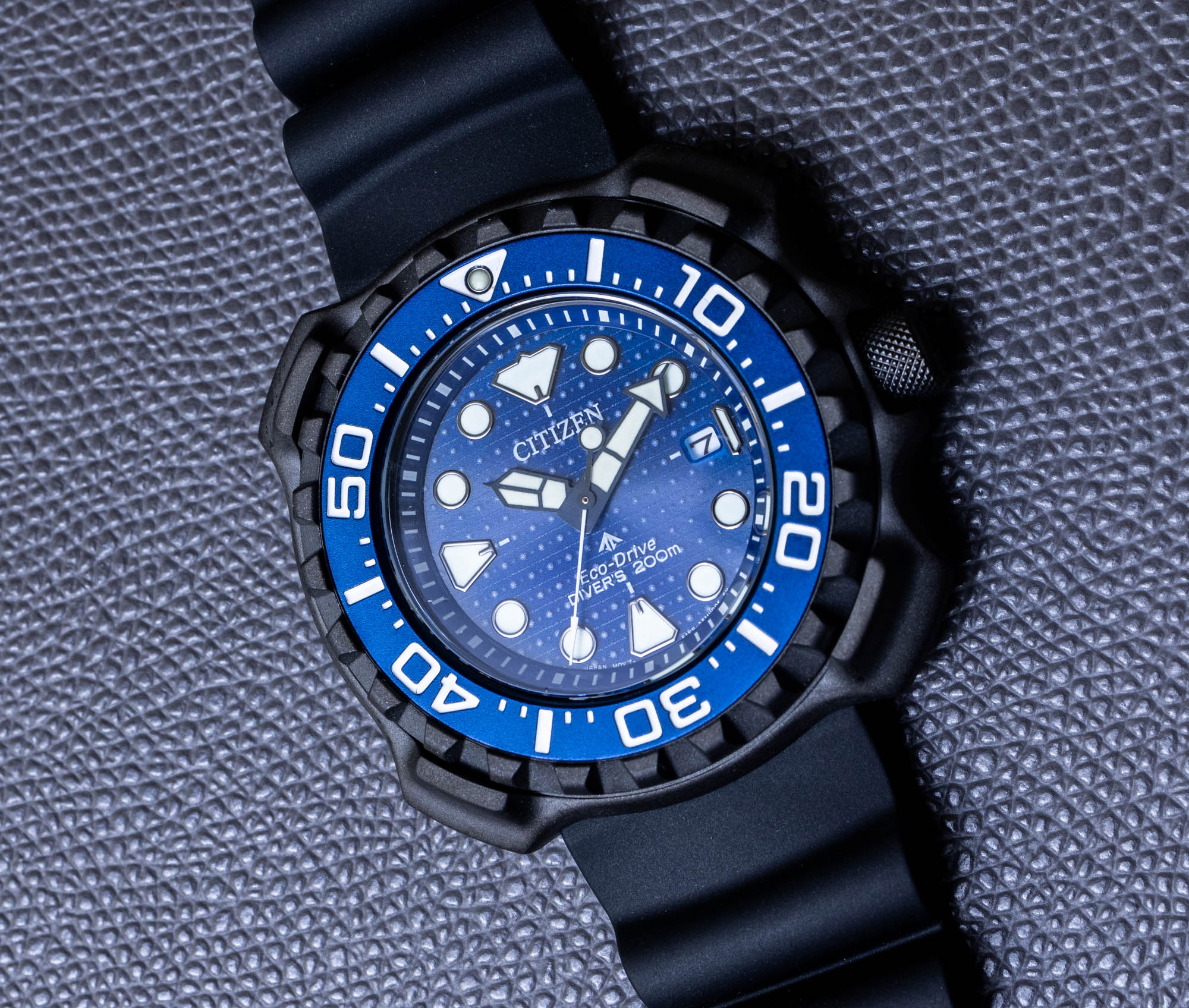 The dial of the Citizen Eco-Drive Diver 200m Limited Edition Whale Shark BN0225-04L takes its unique pattern directly from the skin texture of a whale shark. This distinctive mix of pale spots and grid-pattern stripes gives the royal blue base dial hue an organic, natural feel on the wrist, while also giving the overall design an eye-catching set of visual highlights. The added sunburst texture injects another layer of life into the layout, bringing a dynamic, changing look to this function-forward diver layout. Citizen ensures that this intricate finishing does not impede the Eco-Drive Diver 200m Limited Edition Whale Shark BN0225-04L’s performance as a dive watch, however. With broad, generously lumed diver-style indices paired to a set of aggressive sword-and-arrow hands, the watch is immediately legible at a glance, even in difficult low-light conditions. 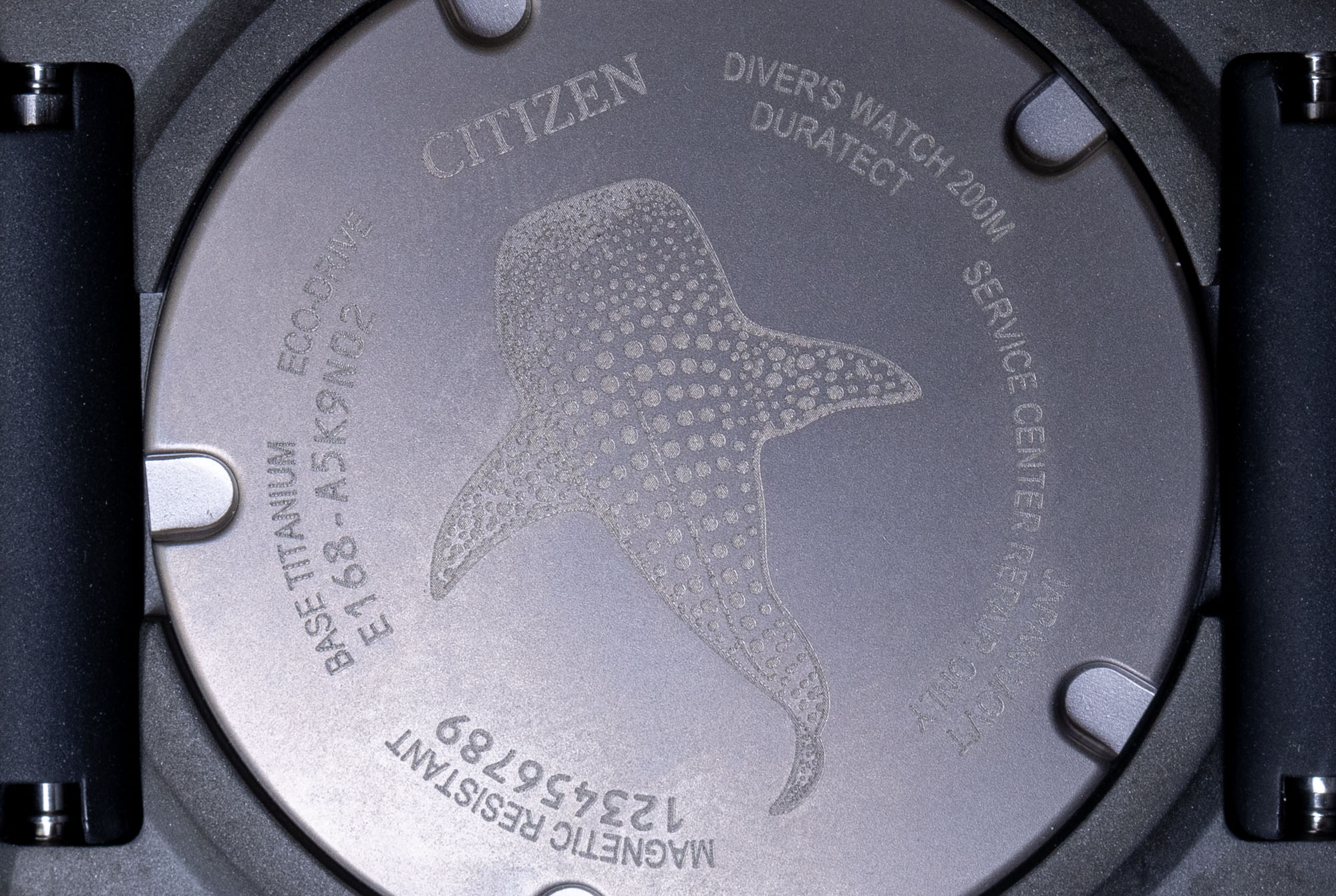 Citizen powers the Eco-Drive Diver 200m Limited Edition Whale Shark BN0225-04L with its in-house Eco-Drive Cal. E168 light-powered quartz movement. Citizen’s iconic Eco-Drive solar charging system eliminates the need for regularly changing batteries, which helps to remove a significant source of pollution from the ecosystem. The Eco-Drive Cal. E168 offers robust and reliable performance as well, with six months of power reserve on a full solar charge and an accuracy rating of +15/-15 seconds per month. Citizen pairs the watch with a supple dive strap in black polyurethane, completing the bold and purposeful look on the wrist. 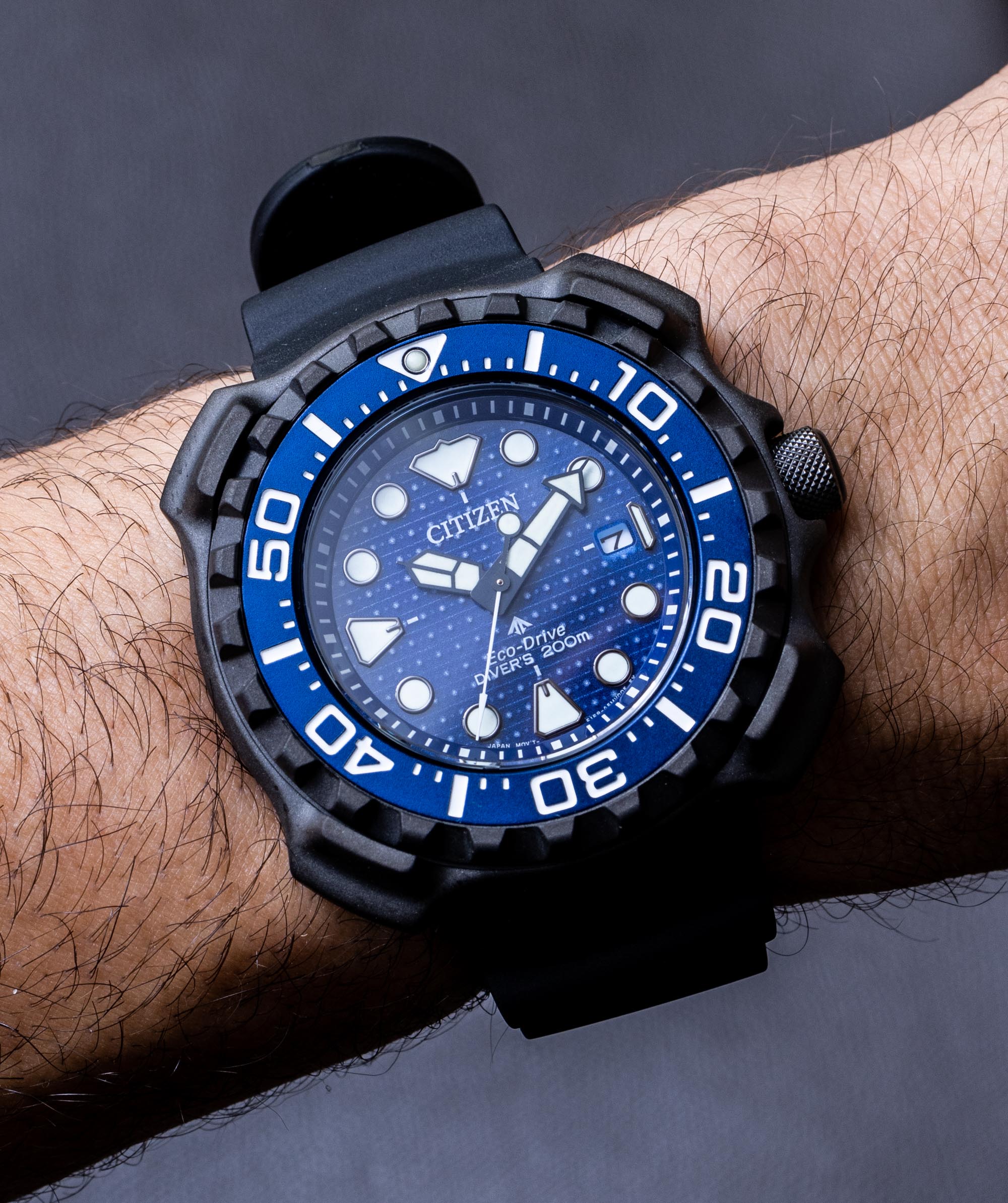