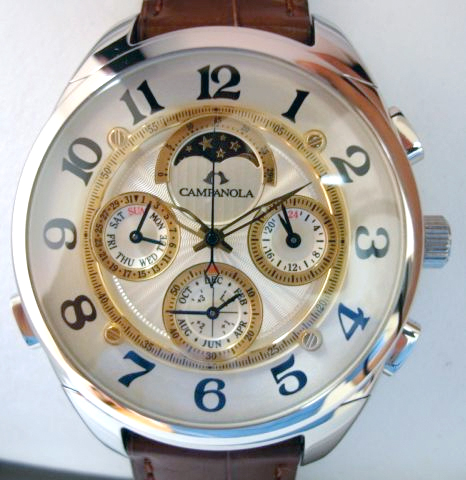 I can hear you collectively rejoicing out there Citizen Campanola lovers. This is one of the nicest Campanola watches I have seen in a long time and represents two things. First, a beautiful cream colored dial with the signature Citizen Campanola high quality application with rich textures and deep gloss. I have a feeling its hard to truly appreciate the face of this watch without seeing it. There is almost a sunburst pattern in the design. The cream colored dials are very new and only began production this year.

The other major difference in this Citizen Campanola is a new branding technique. Prior Campanola models all had “Citizen” logos on the face, and “Campanola” was only written on the back. This is no longer the case. Apparently, someone at Citizen had the idea the Campanola name is now brandable. The motive is likely an attempt to separate the several thousand dollar Campanola watch from the several hundred dollar mainstream Citizen watches. The impetus from this likely comes the popularity in global distribution of the watch outside of Japan. Inside Japan, people can accept that one company produces very high end, and very low end products, but elsewhere this does not play. For this reason you have Honda and Acura, Toyota and Lexus, though in Japan you merely have Honda and Toyota without the brand segmentation. Other watch brands such as Seiko have done this with their “Credor” models.

Enthusiasts such as us will always know a Campanola is a Citizen, and that is not a bad thing. I am sure this new branding method will increase sales and overall perception of the watch. For me, I don’t need additional convincing, I know how much I like these watches.

Functions on this Campanola model AH4000-01P are the same as other Grand Complication models. See a full review here for all the function details and a review of the watch here. Owning a similar model, I can say that I love it. Just a reminder, the watch is about 45mm wide in size, comes with a crocodile strap, and a beautifully polished case. One on eBay is being offered starting at about $1,600; an excellent deal. Check it out.