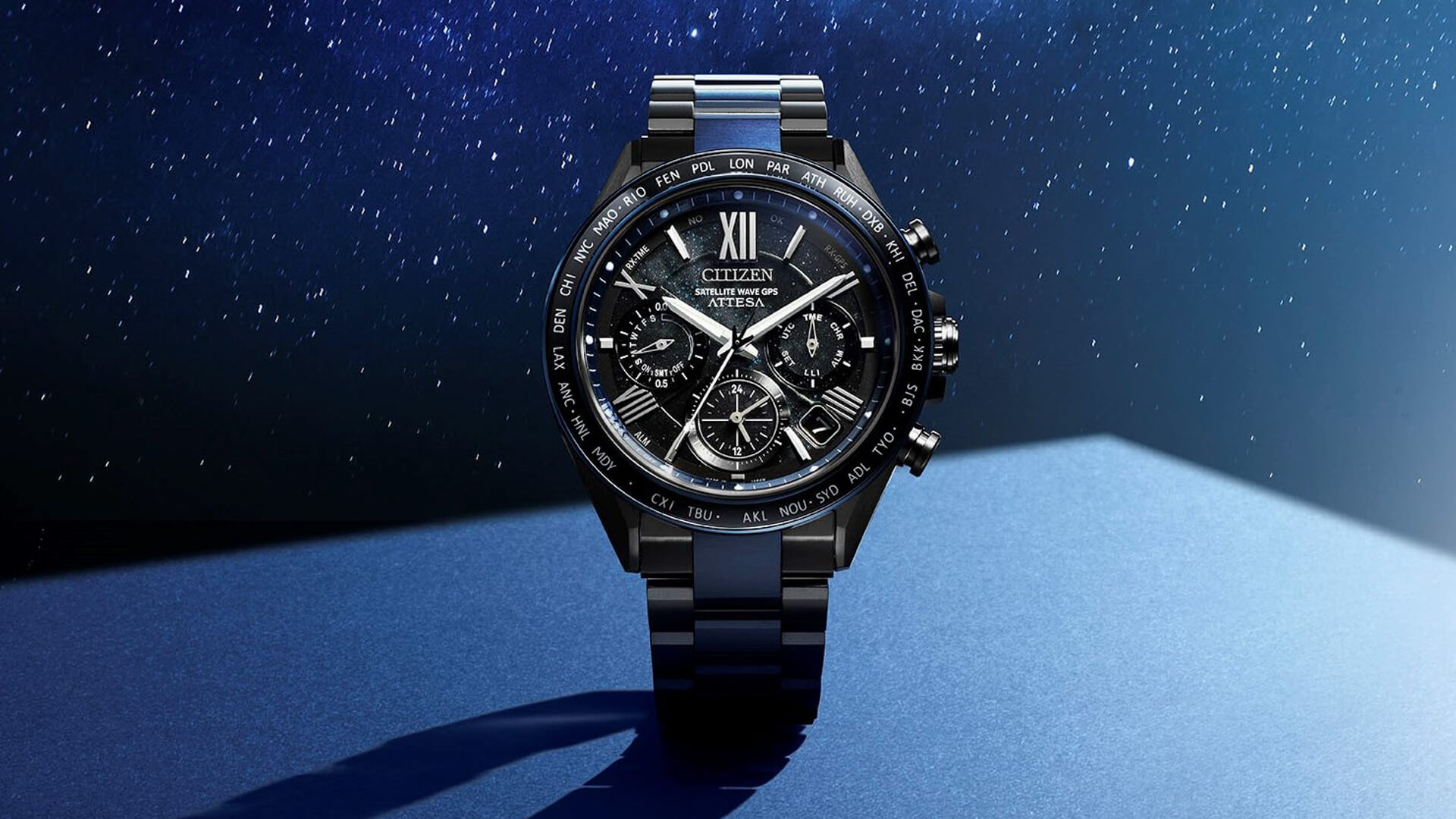 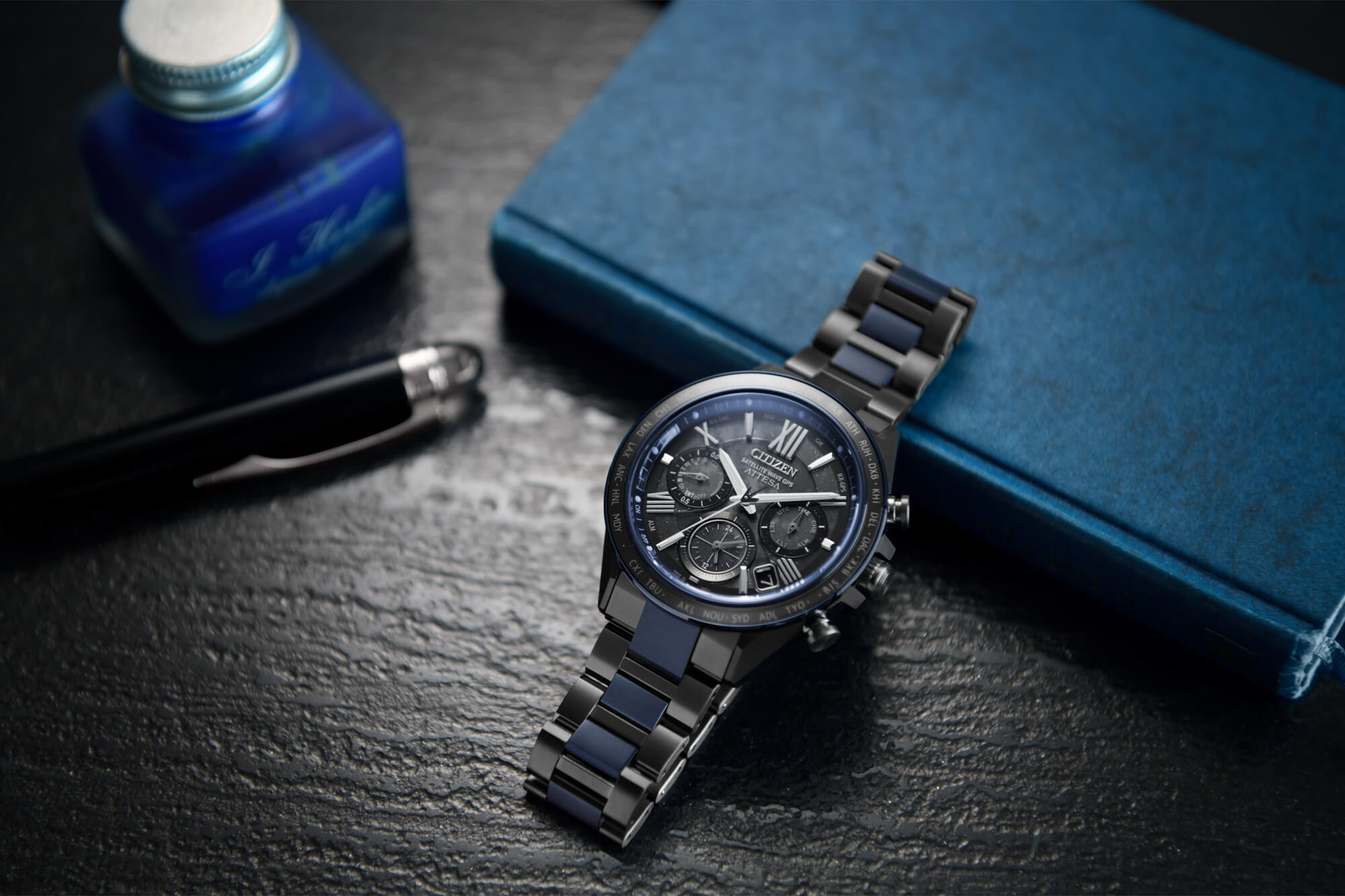 It’s a good time to be making space-themed, or even space-inspired, watches. NASA just successfully launched Artemis 1, ushering in a new age of space exploration. Private space endeavors are proliferating, and the James Webb telescope is returning some of the most stunning images ever taken (of anything). It also helps that space is awesome (if also terrifying in its unending vastness).  And on November 28th, a lunar mission by commercial space company ispace will see its Japanese moon lander launch atop a SpaceX Falcon 9 rocket. As a partner of ispace and the Hakuto-R project, Citizen has provided its Super Titanium™ technology for use in the lander’s legs. To commemorate this partnership and celebrate the 35th anniversary of its Attessa line, Citizen has released the 35th Anniversary Citizen Attessa, featuring the brand’s most advanced movement and materials technology. 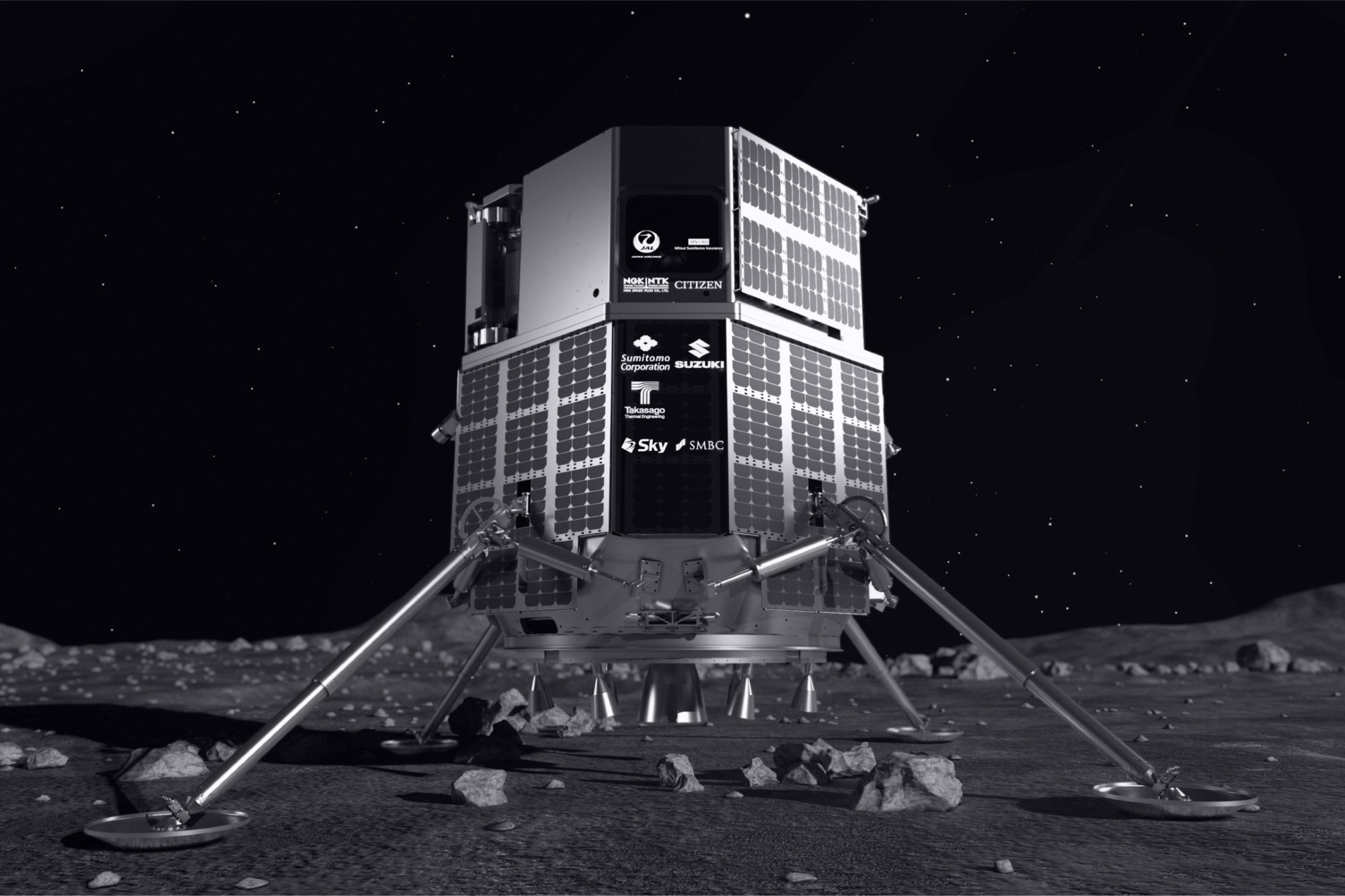 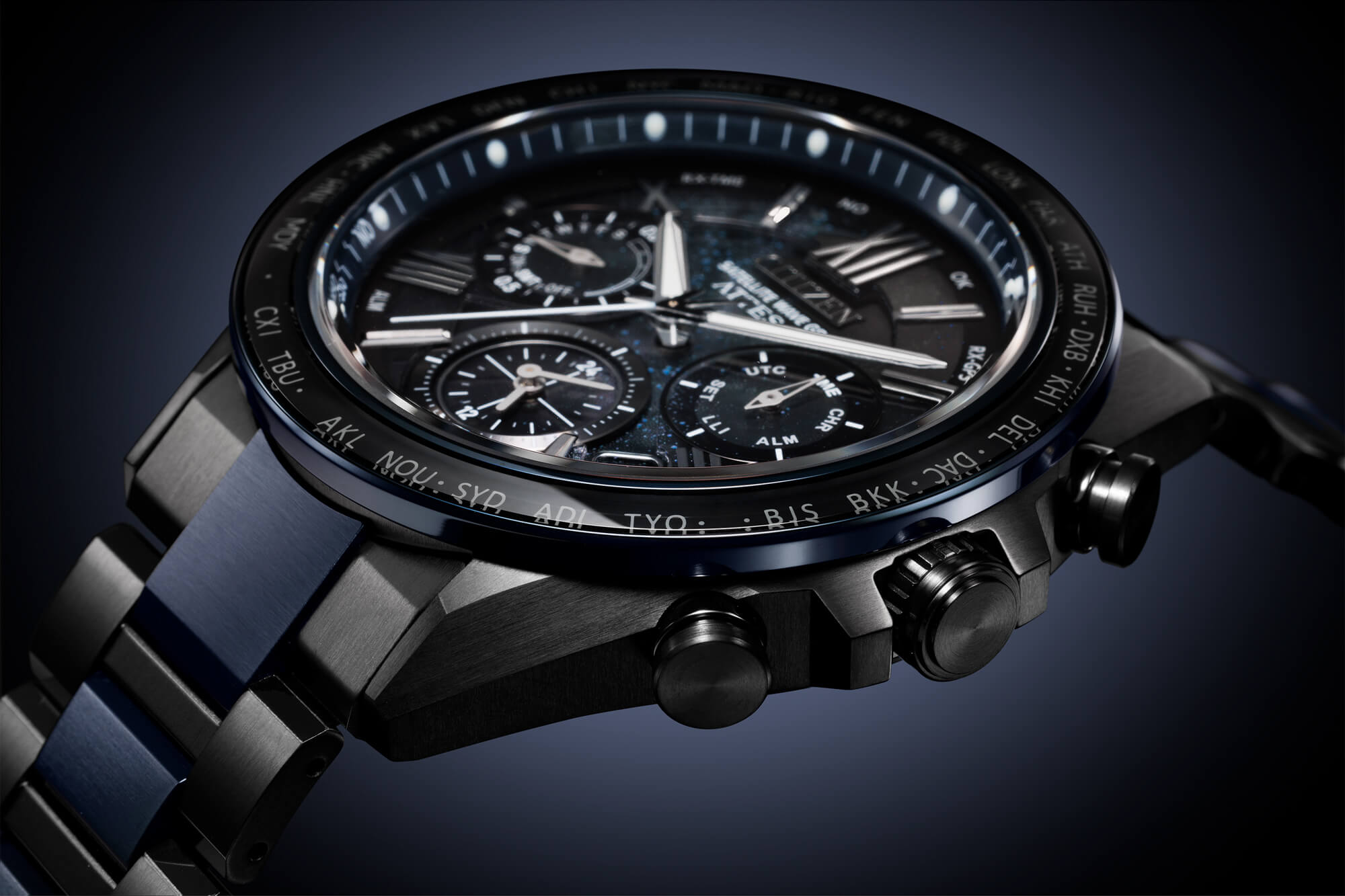 The 35th Anniversary Citizen Attessa has a truly spectacular case. The whole watch is inspired by the idea of a blue universe, and while I can’t be entirely sure what that means, the deep blue and black two-tone case offers a beautiful complement to the dial. The 44.5mm case is 16mm-thick, so this isn’t a small watch, but the larger canvas allows Citizen to put the case and dial on display. The case is made with the brand’s Super Titanium™, which sees it implement its proprietary Duratect DLC case hardening in constructing the case, resulting in a material 5x harder than steel and further resistant to scratches, to say nothing of exceptionally light on the wrist. So, while this may measure 44.5mm x 16mm, it won’t feel like it on the wrist. Most recently, though, Citizen has developed a beautiful blue Duratect DLC hardening coating, which it used to full effect here in the center links the polished bezel, which features a sapphire insert and city names for the world time function. Looming over the dial is a double-domed sapphire crystal with anti-reflective coating. The case is water resistant to 100m, and its bracelet features a short, push-button folding clasp. 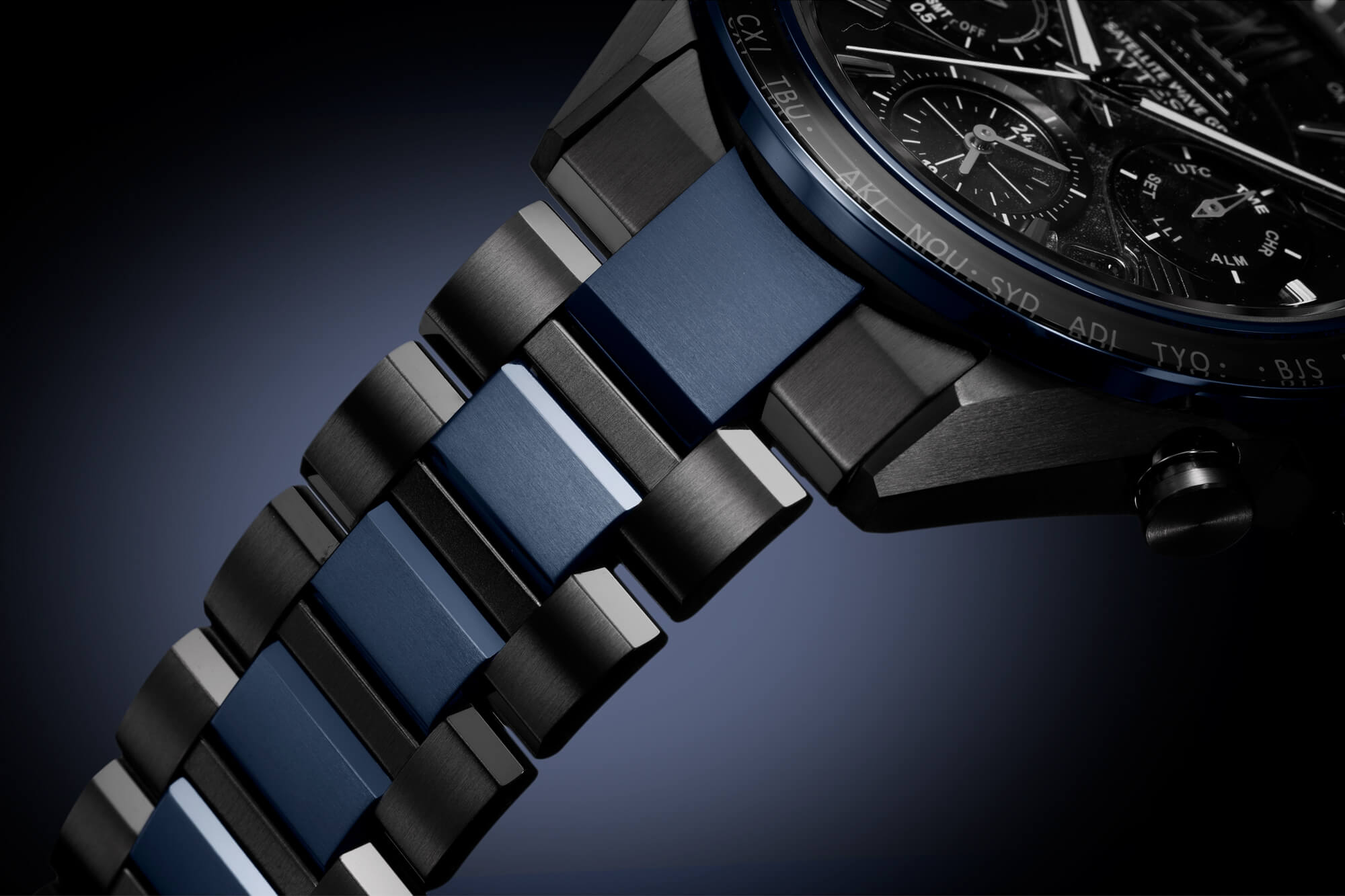 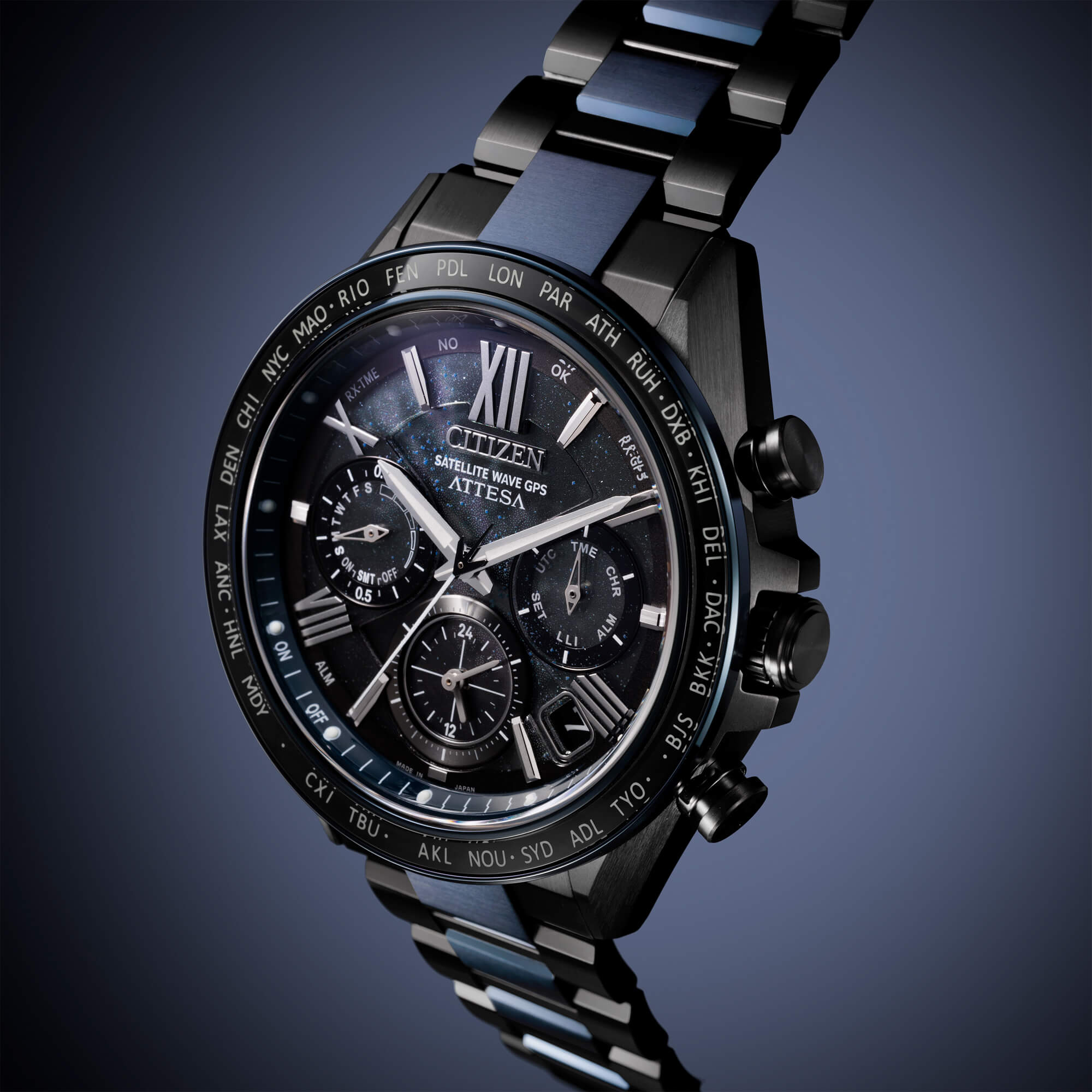 Just as engaging as the angular case is the dial. A multilayered surface serves to display the myriad functions afforded by the watch’s advanced movement. In addition to telling the time, the watch also offers world time in 27 cities (40 time zones), a chronograph, dual time zones, universal coordinated time display (UTC), a perpetual calendar, as well as daylight savings time, power reserve and light-level indicators, and day and date. The hands and Roman numeral indices (an interesting but pleasingly not out-of-place choice) are polished and beveled, with the hands featuring luminescent paint. Most intriguingly, though, is the central dial, which features a speckling of blue against a black background that sparkles in the light and evokes images of deep space. 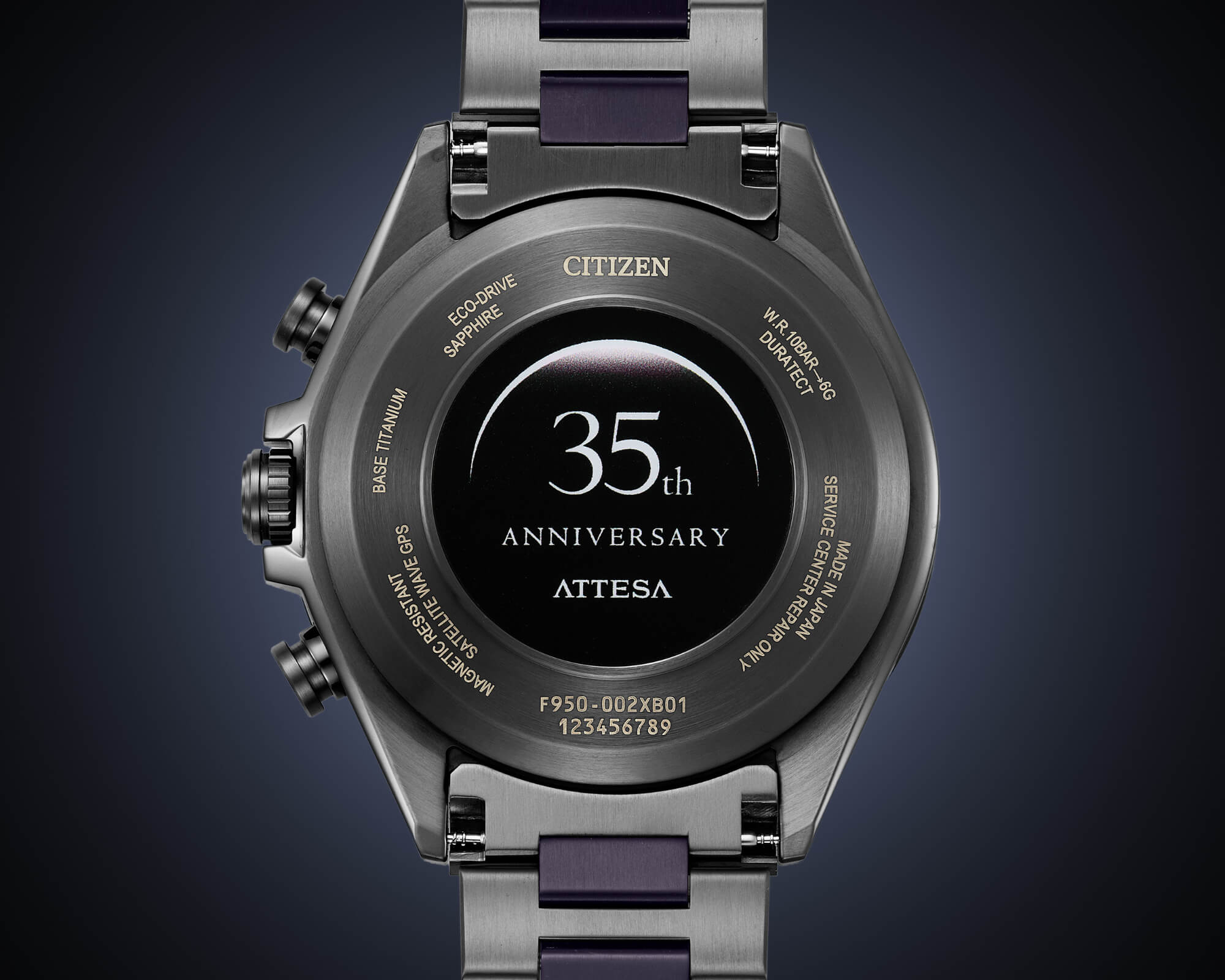 The watch is powered by the Citizen F950, an Eco-Drive movement with Satellite Wave GPS. What does that mean? In addition to the array of functions enumerated above, the watch stays powered by light and, when fully charged, can run for up to five years (in power save mode). But the watch also features an accuracy of -/+5 seconds per month—if you’re not using the satellite sync. When you sync with a satellite, the watch automatically adjusts itself to the exact time. In effect, the watch has on-demand accuracy of -/+ 0 seconds per day. Citizen makes a fairly big deal out of the watch’s ability to sync in three seconds, and all I can picture is two people with satellite-enabled watches, dueling OK Corral-style to see whose watch syncs the fastest. To hear Citizen tell it, the watch with the F950 will always win. 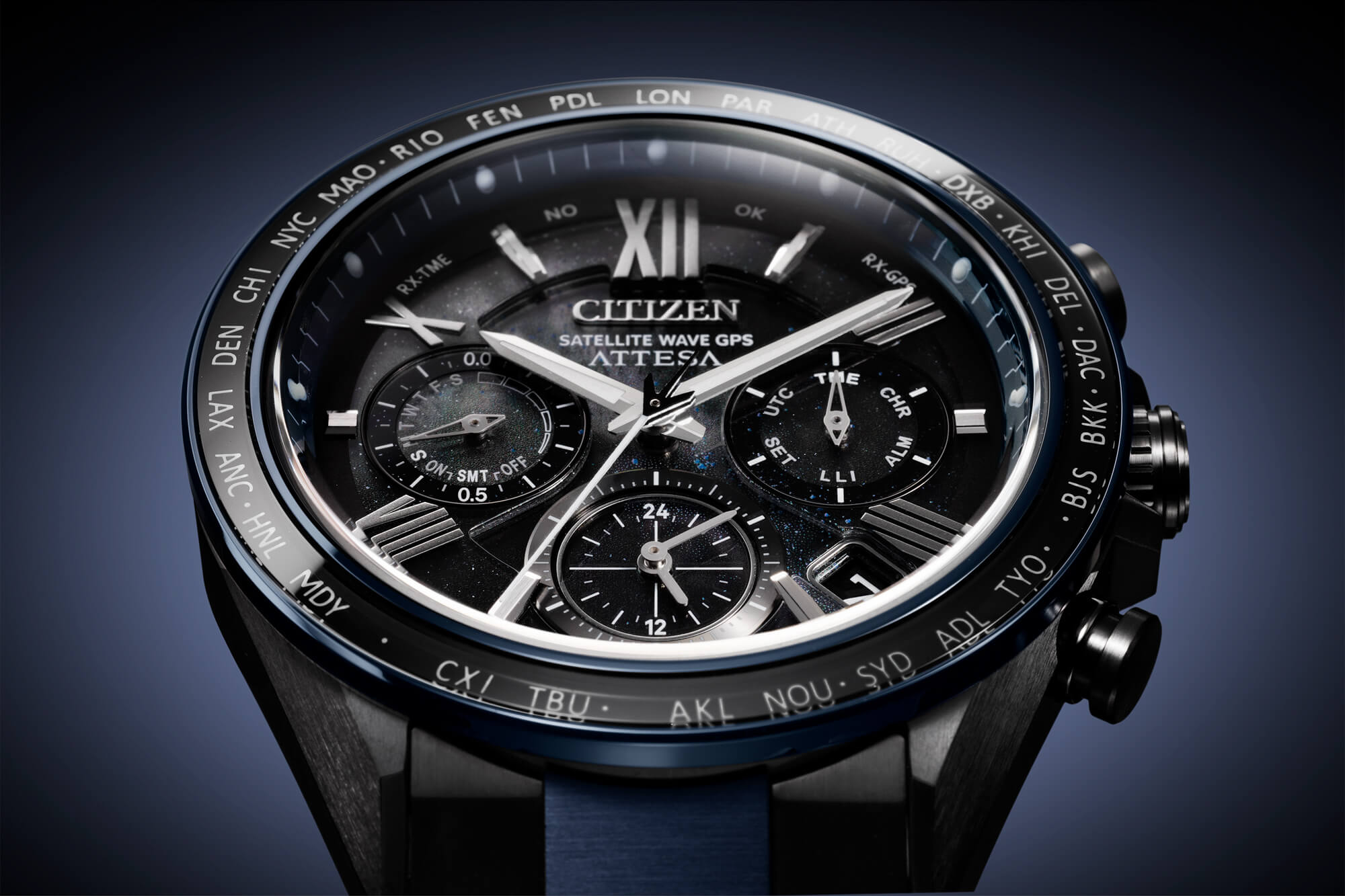 While the size and price may keep many away from this timepiece, there’s no denying the beauty of this watch. Its unconventional black and blue two-tone colorway, sapphire bezel, and sparkling dial are sure to give this a striking wrist presence without being too loud. Add to that an expansive functionality set and exceptional accuracy (even without a satellite), and the watch presents something truly tempting. The Citizen Attessa 35th Anniversary, limited to 1,000 pieces worldwide, is available directly from Citizen and is priced at $3,550 USD. For more information, please visit the brand’s website.