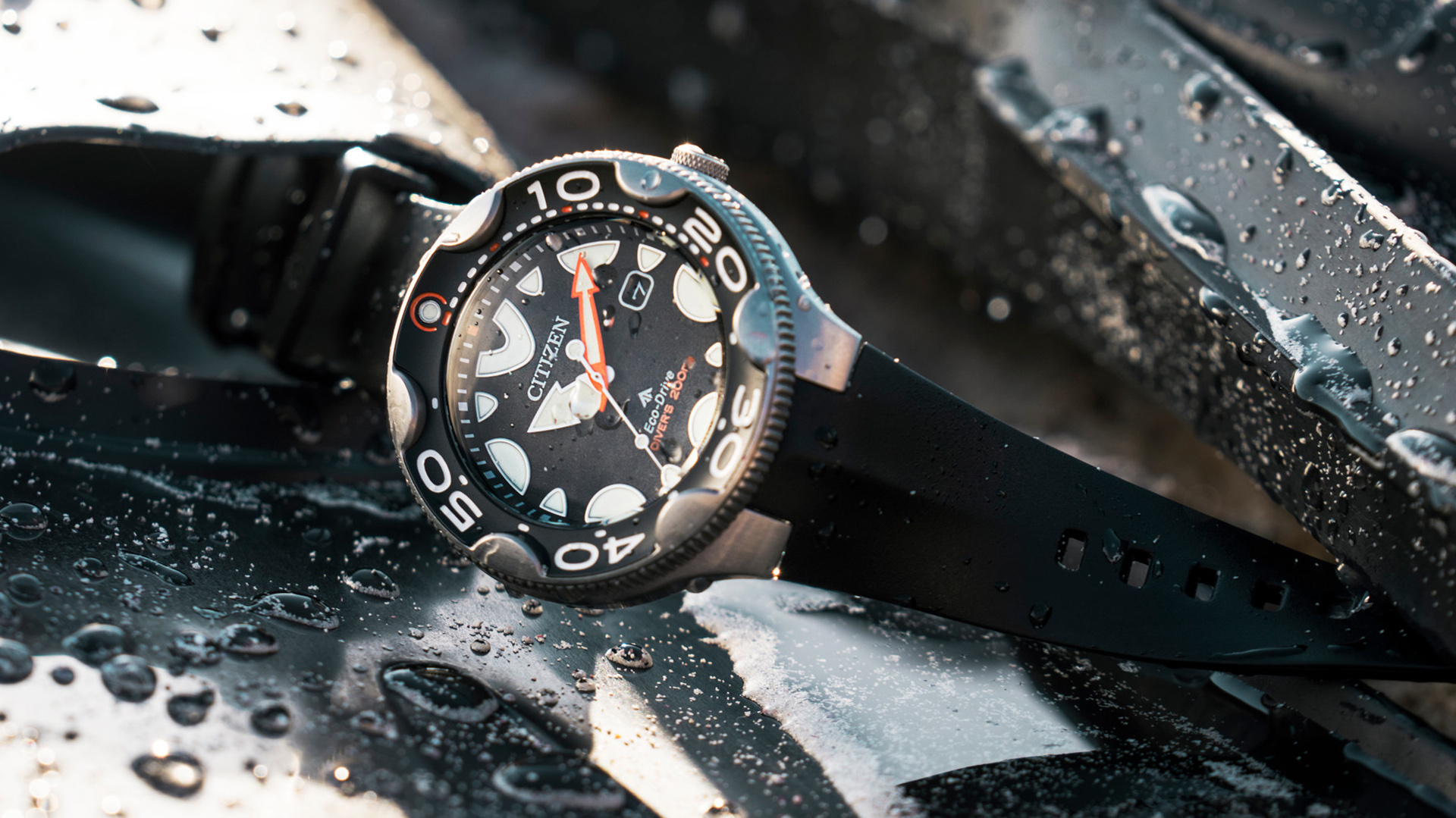 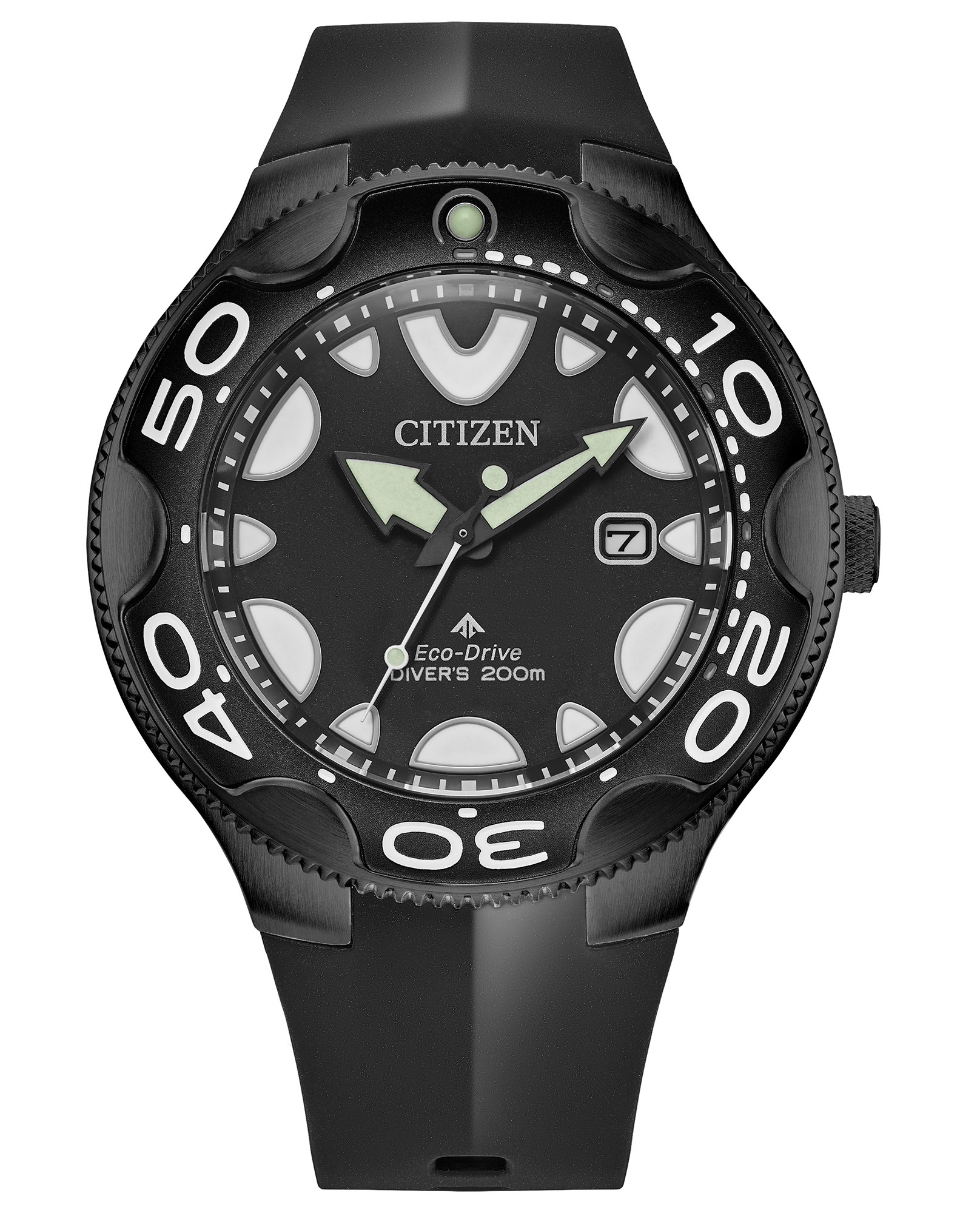 June 8th is World Oceans Day, and as the world turns its attention to the health of its ocean ecosystems, brands across the watch industry are using the day as an opportunity to showcase their devotion to exploring and preserving these crucial environments. Japanese giant Citizen is no stranger to oceanic designs, and for its World Ocean Day contribution the brand revives one of its most unique and organic watch designs. The new Citizen Promaster Dive series faithfully revives the wildly distinctive 2006 Promaster Dive “Orca” line, with a newly refined execution and a focus on supporting ocean conservation.

At 46mm-wide, the Citizen Promaster Dive line’s stainless steel case should be far from a shrinking violet on the wrist, but it’s the design’s uniquely organic, rounded contours that draw the most attention in images. Inspired by the sleek, rounded flanks of the orca whale, the Promaster Dive’s continuously curving brushed case sides, short, broad lugs, and sinuous wraparound case curvature give this a dramatically singular look in a field of sharply angular, squared-off case designs. The coin edge bezel adds a distinctive cap to this already creative design, with a boldly graphic anodized aluminum insert in navy blue or classic black, and raised semicircular tabs at each five-minute mark inspired by an orca’s powerful rounded teeth. While these raised tabs should allow for an easy grip even when wearing heavy diving gloves, the effect on the overall design is profound, with a decidedly organic, biological bent that rarely enters into mainstream watch design. An optional black IP coating gives this aquatic look an added layer of visual aggression in images, without falling into the “tactical” visual cues that tend to dominate black-cased dive watch designs. Each variant of the Citizen Promaster Dive uses a solid caseback, featuring a color-filled engraving of an orca whale in profile. Citizen rates this series for a dive-ready 200 meters of water resistance. 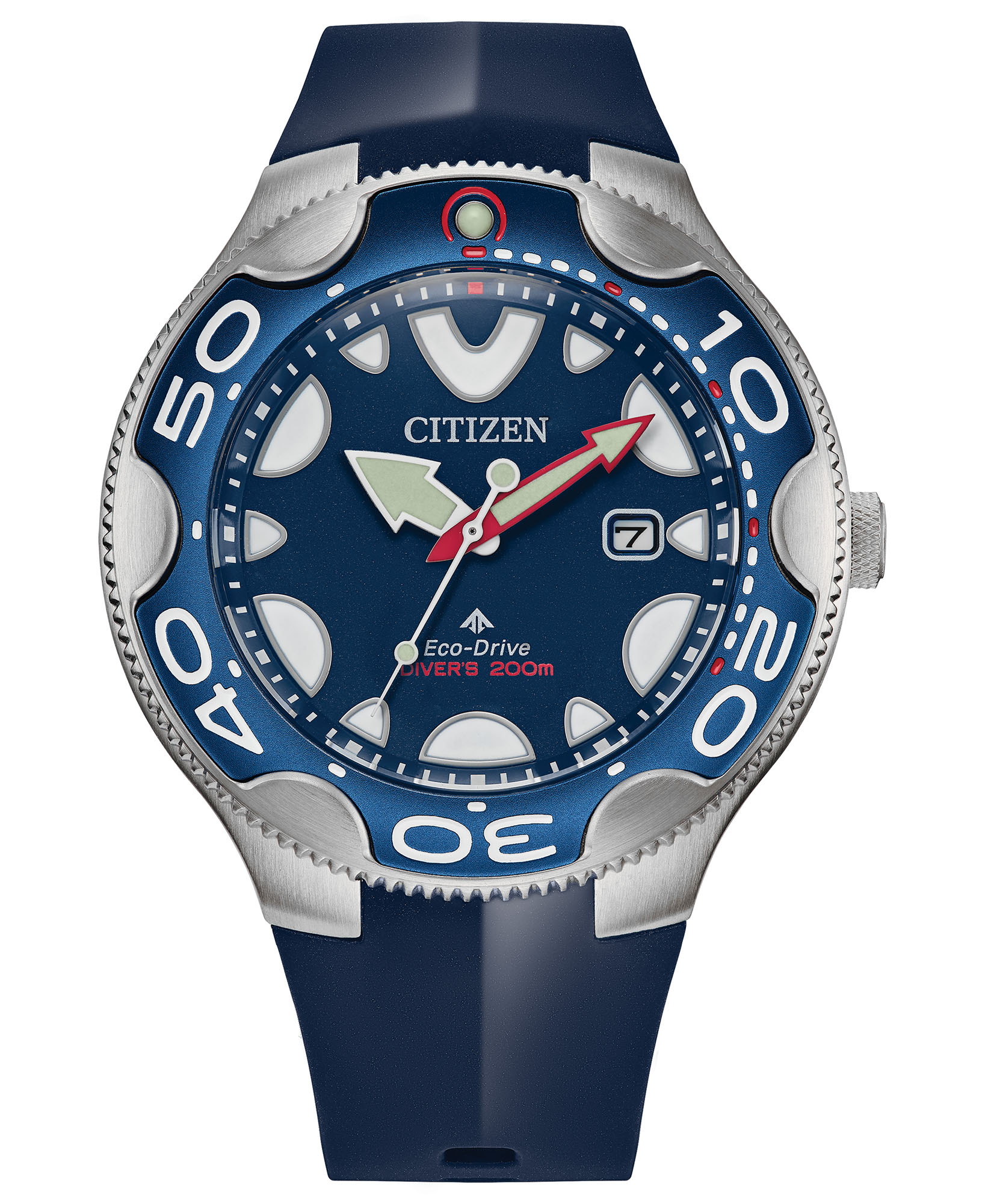 Like the cases, the dials of the Citizen Promaster Dive line present a uniquely rounded, organic take on familiar dive watch elements. While the matte black or navy blue dial surfaces keep things relatively simple in images, the applied indices take on wild, oversized, tooth-like forms, both reinforcing the orca whale theming and offering a broad surface for luminous paint application. The arrow handset offers a similarly rounded, organic twist on dive watch design principles, without sacrificing legibility in photos. For the standard black dial model, Citizen adds a layer of high-visibility orange to the minutes hand, making this crucial timekeeping element immediately stand out at a glance. Likewise, the blue dial model uses a red minutes hand for a similar high-contrast effect, but the black IP-cased model keeps things comparatively stealthy with matte black-rimmed hands. All three variants share the same cutout date window at 3 o’clock, which notably disrupts the flow of the overall design in images, particularly thanks to the uniqueness of the rest of the layout. 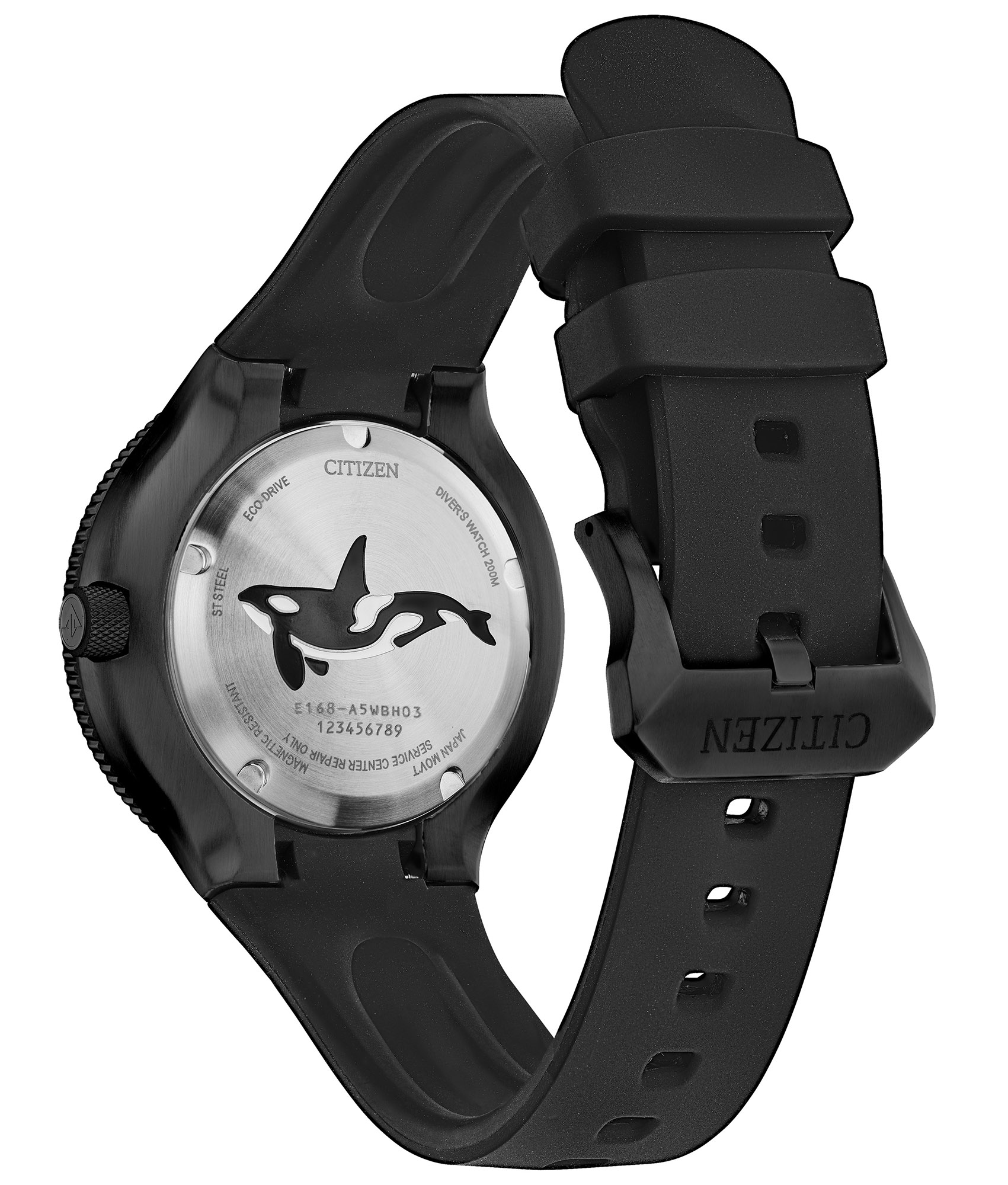 Citizen powers each new watch in the Promaster Dive line with its in-house Caliber E168 Eco-Drive solar quartz movement. The Eco-Drive family has earned a loyal following from enthusiasts for its blend of durability and performance, and the Caliber E168 is a solid example of the breed with a 180-day power reserve on a full solar charge and a stated accuracy of +15/-15 seconds per month. Citizen pairs each member of the Promaster Dive series with a tapering urethane rubber strap in either black or navy blue. In keeping with the brand’s commitment to World Oceans Day, all proceeds from the sale of Promaster Dive watches purchased through Citizen’s U.S. website on June 8 and June 9, 2022 will go to benefit the marine conservation works of Conservation International, a prominent environmental NGO. 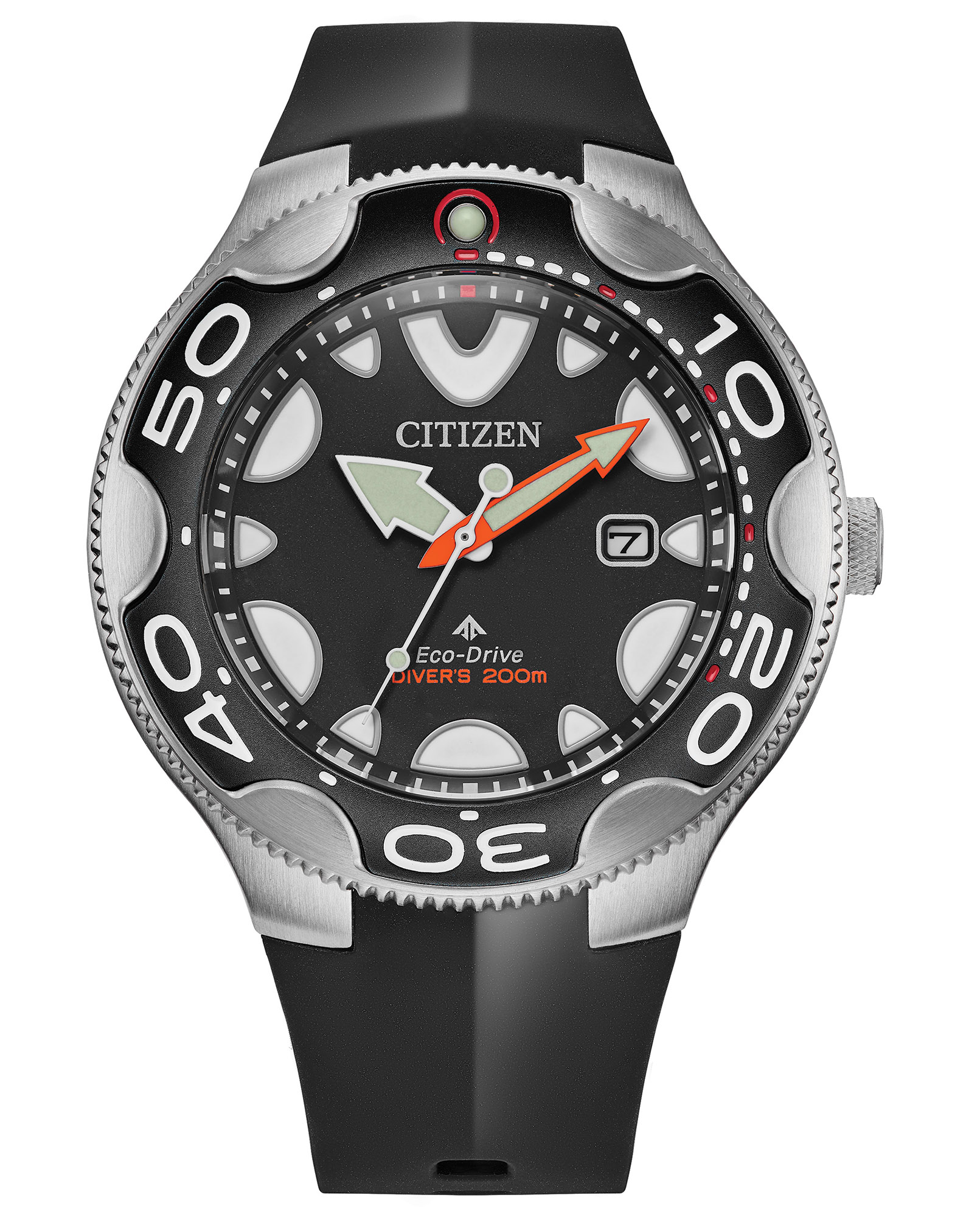