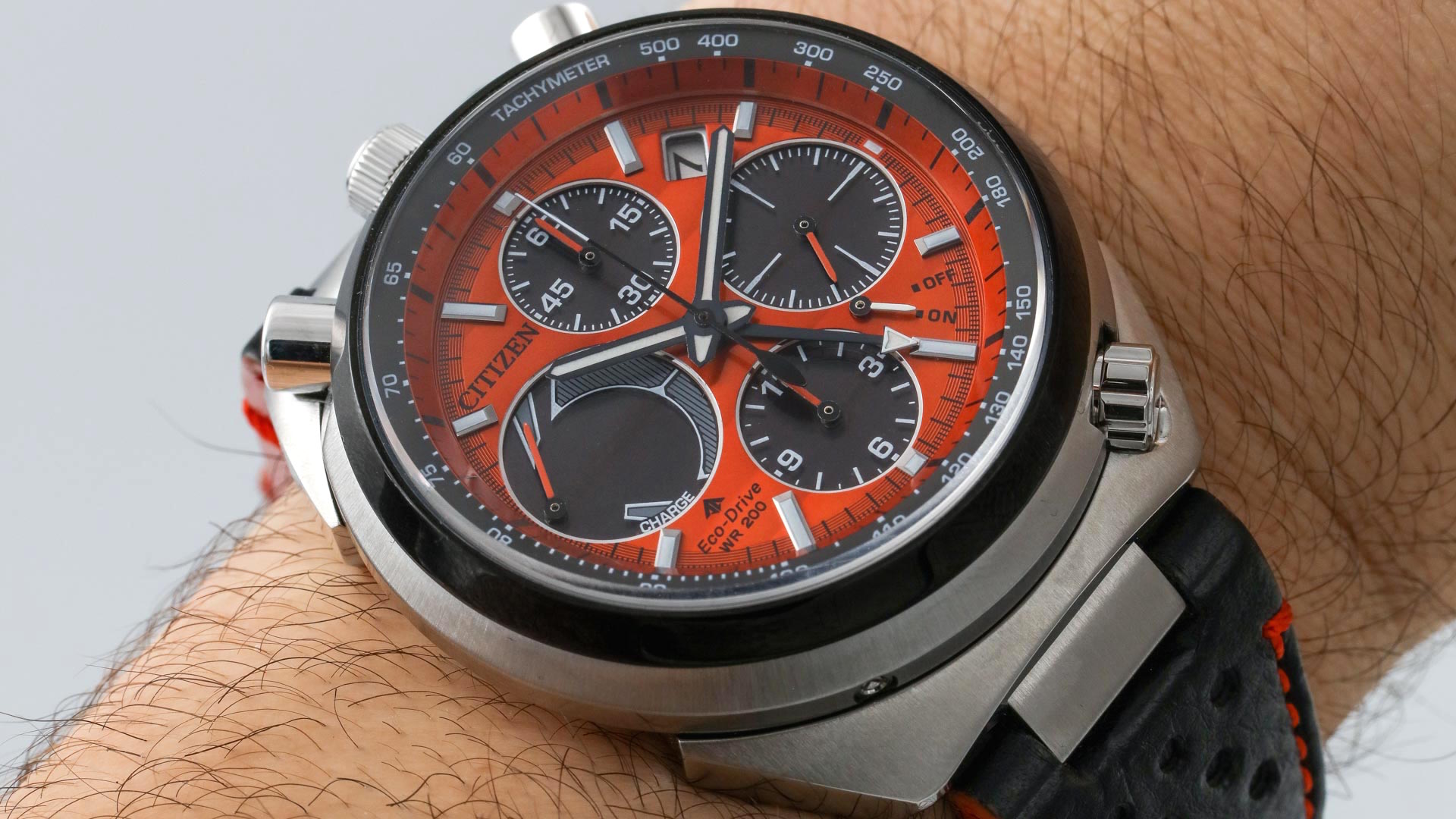 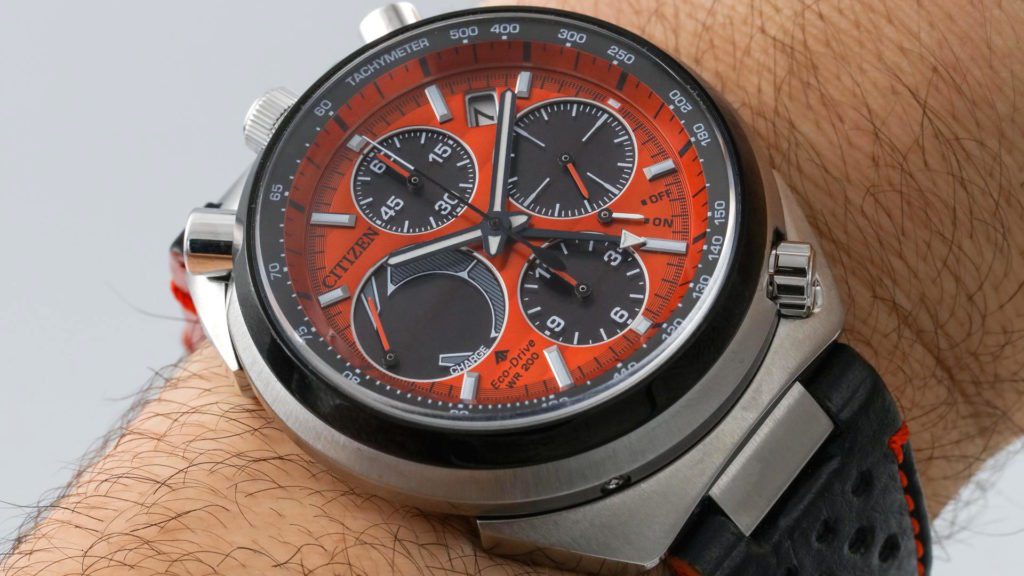 For Baselworld 2018, Tokyo-based Citizen unveiled a re-designed chronograph model that directly channels their 1972 Challenge Timer series of watches. The watches had a reasonable following due to what is known as the “Bullhead” structure – meaning that the crown and pushers are at 12 o’clock instead of the traditional 3 o’clock position. The Citizen Tsuno Chronograph Racer looks and feels like someone put a strap on a stopwatch. The watch will come in 4 different styles and feature Citizen’s proprietary Eco-Drive technology with a 1/5th second Flyback Chronograph. 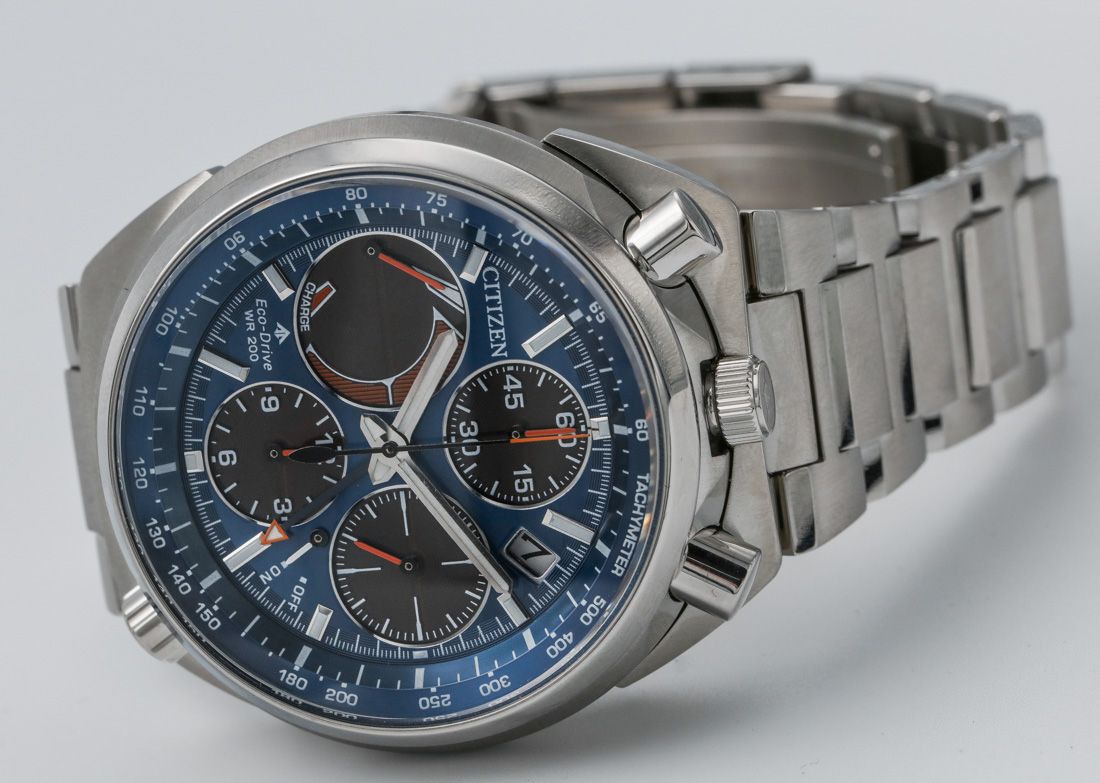 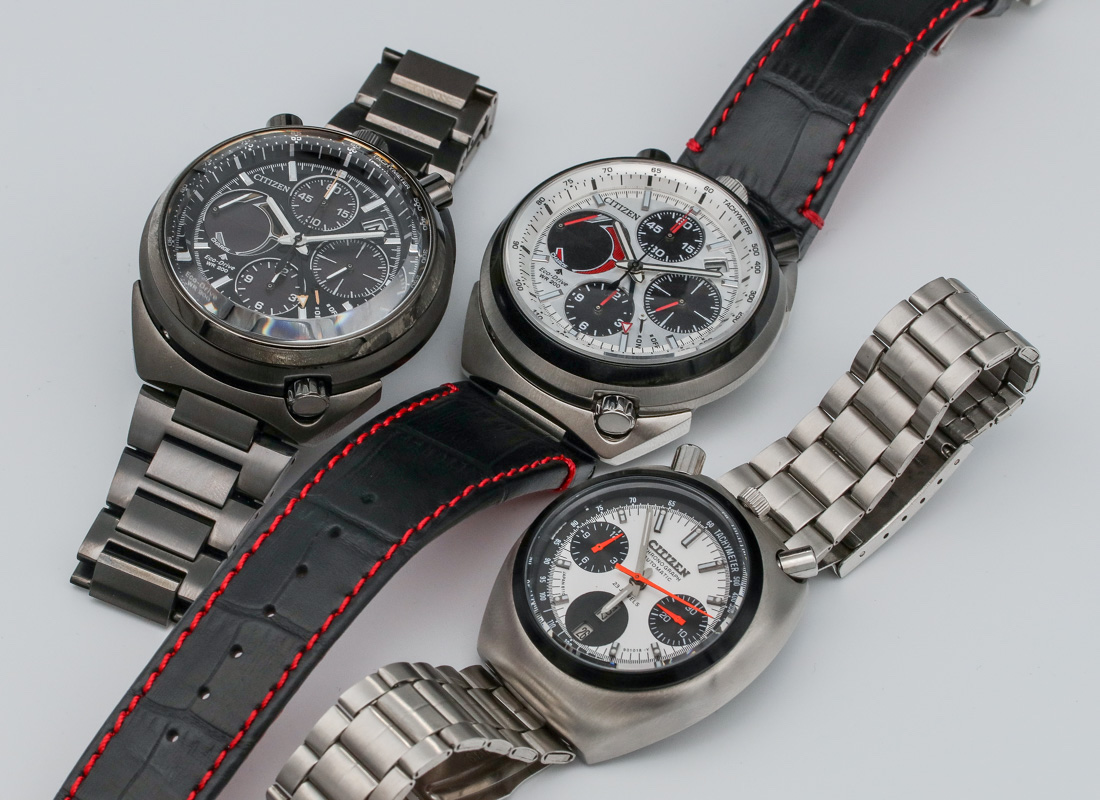 With this year’s apparent theme for Baselworld being “Re-Issues of 1970s models” (See Citizen’s direct rival – Seiko), Citizen takes a second look at a series of watches that a lot of enthusiasts have been collecting, trading, and selling at significant premiums. While surprising, and a little out of left field, the Tsuno Chronograph Racer may not be as practical as it is charming, but it is a fun little timepiece that won’t force a second mortgage. 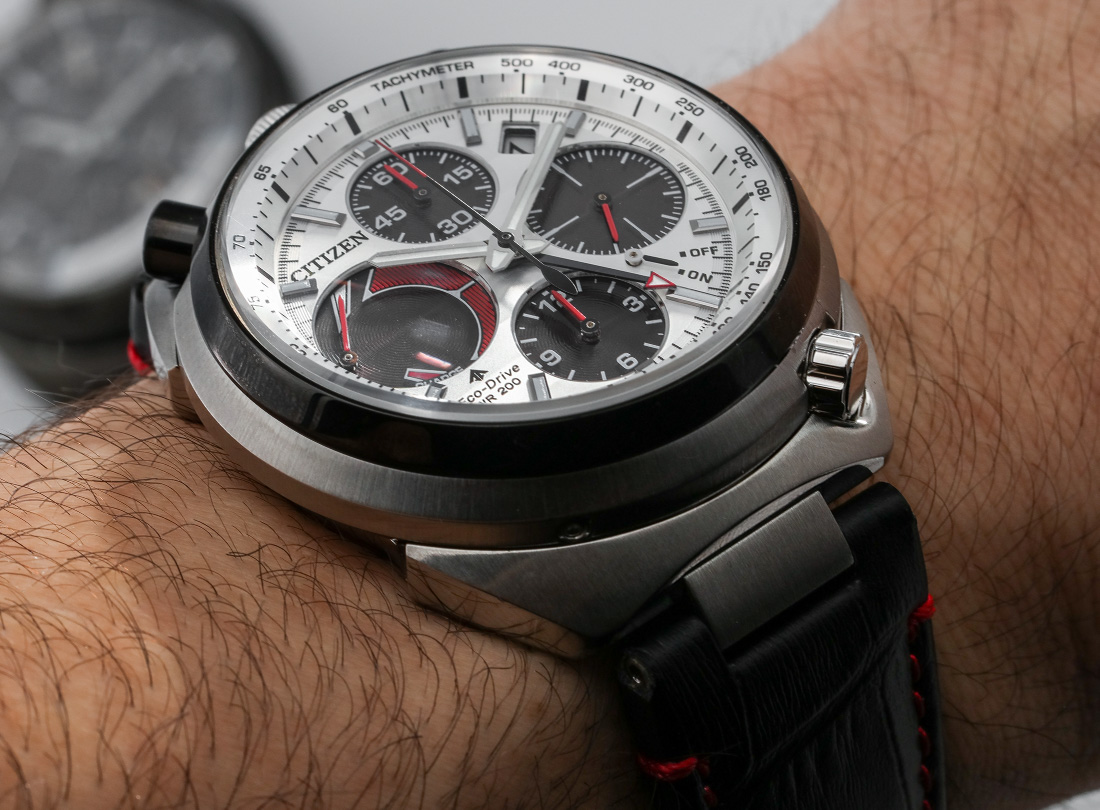 Let’s start with the case. Measuring in at 45mm in stainless steel, the watch doesn’t feel like 45mm, though I largely attribute that to the fact that the crowns aren’t on the side of the watch, but at 12 o’clock and 5 o’clock (I’ll get to that in a bit). The inclusion of integrated wide lugs and straps won’t sit well for everyone, but they fit the watch nicely, regardless of whether you’re a fan of stitched colored leather or a stainless steel bracelet as your only options. I will say, the watch looks thick on the wrist. While we weren’t able to get measurements, the fact that the lugs and strap sit at the bottom of the case and not the middle means that the wearer will have to pay close attention to his arm swinging around door frames. The crown and pushers at the top are largely the reason for this. Instead of not needing to worry about that when the protrusions are on the side, Citizen had to keep the strap underneath them to make them practical and usable – regardless, the watch isn’t uncomfortable because of this, but the dome sapphire does sit far off the wrist. 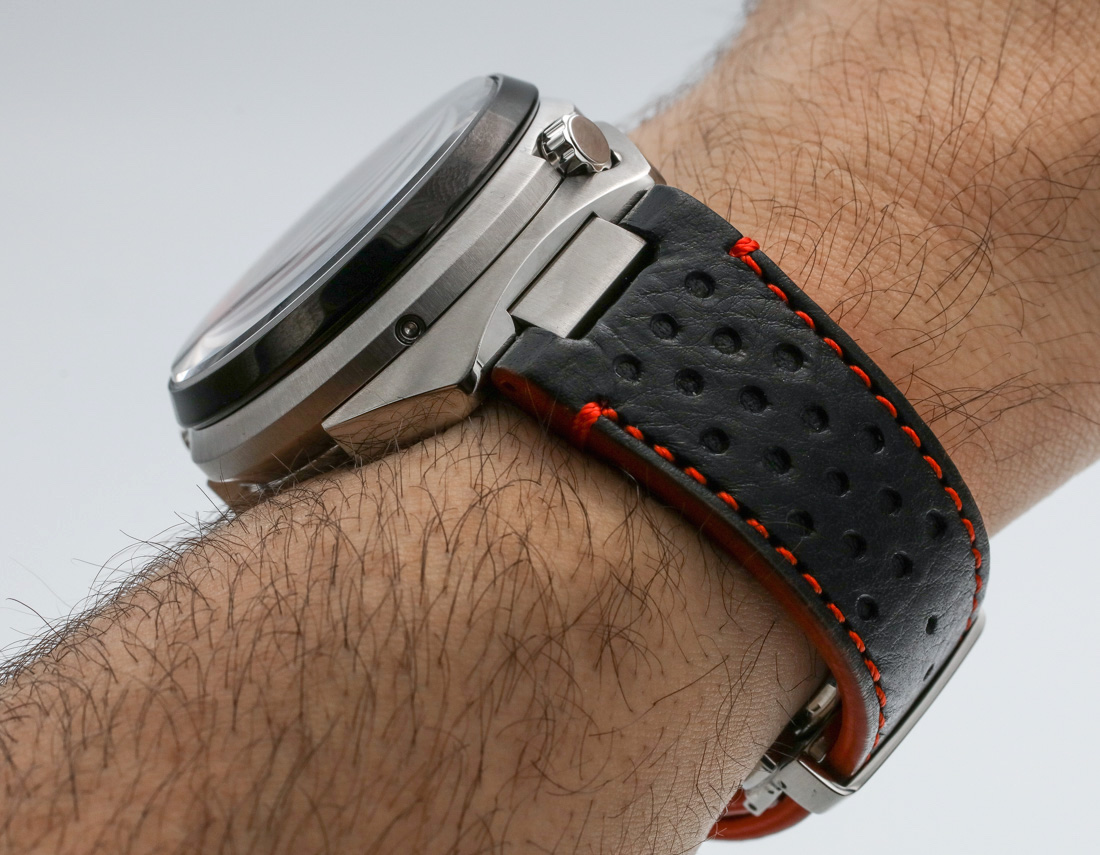 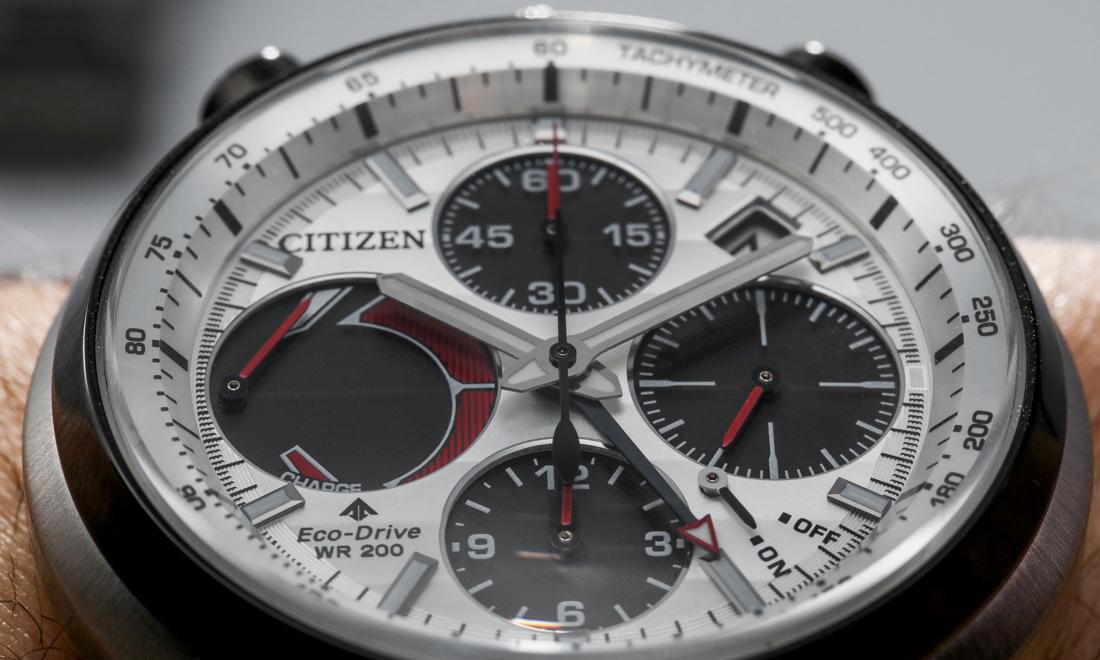 The dial is going to be a point of contention for people who would consider the watch once explained. I don’t think it’s as outrageous as some people are making it out to be. Busy would be an understatement, but I would argue especially for Citizen, this is a bit more reserved than I would have expected from a new sport watch – especially one inspired by a model from the ’70s. I will also make a note, that the renders don’t do this watch justice. When I first saw the press release, I imagined these models were going to be a lot less legible on the wrist, and I was very wrong. At 12 o’clock you have your 12-hour counter, 3 o’clock is running seconds, and 6 o’clock is minutes. At 1:30 you have a date aperture which is arguably my least favorite aspect of the dial. At 4:30 is an on/off indicator for the watch’s alarm function controlled by the crown at 5 o’clock and displayed by the red-tipped hand. 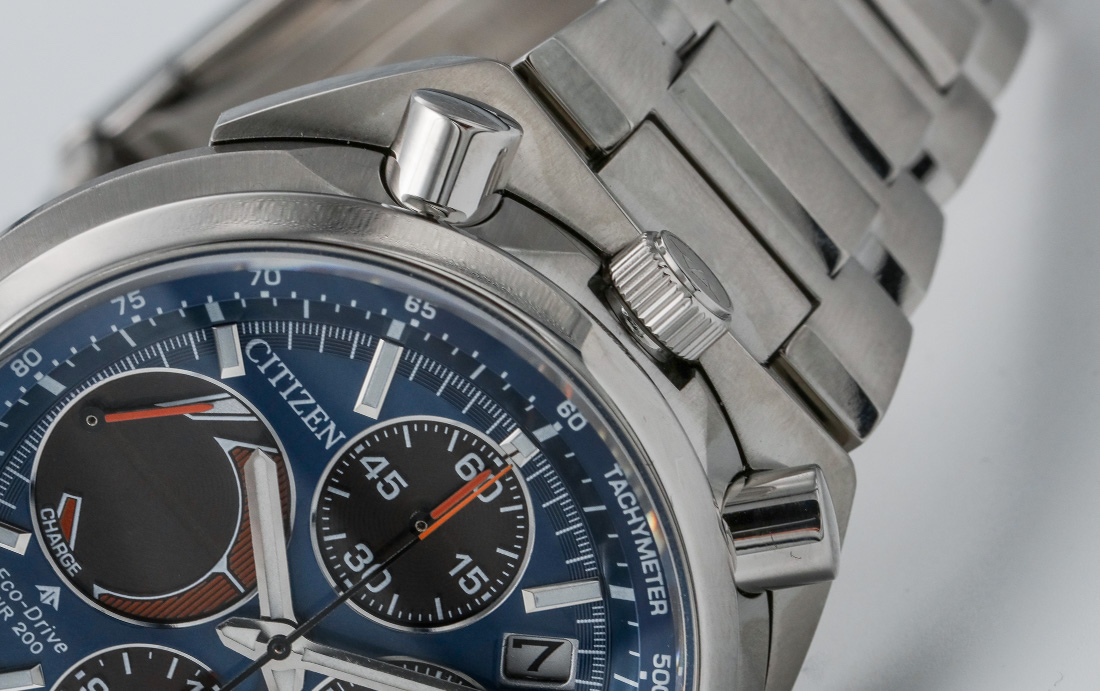 While I think those aspects are busy, I find the tachometer scale with the chapter “cliff” the most eye-sore inducing element. I feel it was a shape included to make the watch a bit larger than it needed to be. It should have been flat to keep a bit more uniformity. But what’s that sub-register at 9 o’clock? Well that’s the power reserve indicator. In lieu of a simple crescent, Citizen opted for an oversized register to display the power reserve. I certainly don’t think it looks bad and it actually adds a fair amount of balance to the dial, even if there is a lot to look at. 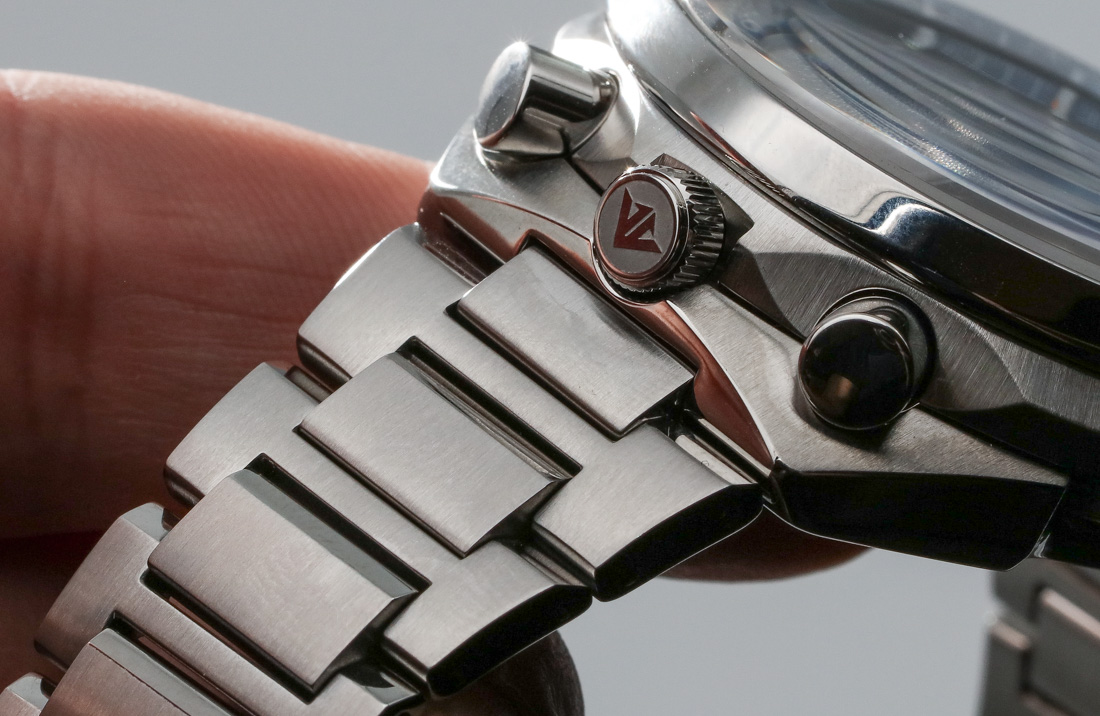 As mentioned earlier, the watch utilizes Citizen’s Eco-Drive technology. Largely a quartz watch powered by light, Citizen heavy-handedly promotes the technology in their watches because it never needs a battery if being worn consistently. The benefit of it is that the watch is able to bolster all sorts of functionality without mechanical components – keeping the pricing down immensely. The reason I mention this is because I’ve seen a lot of blow-back because it’s not a mechanical chronograph. But I would like to remind everyone that this is Citizen, and Eco-Drive technology paired with an affordable nature is their claim-to-fame. 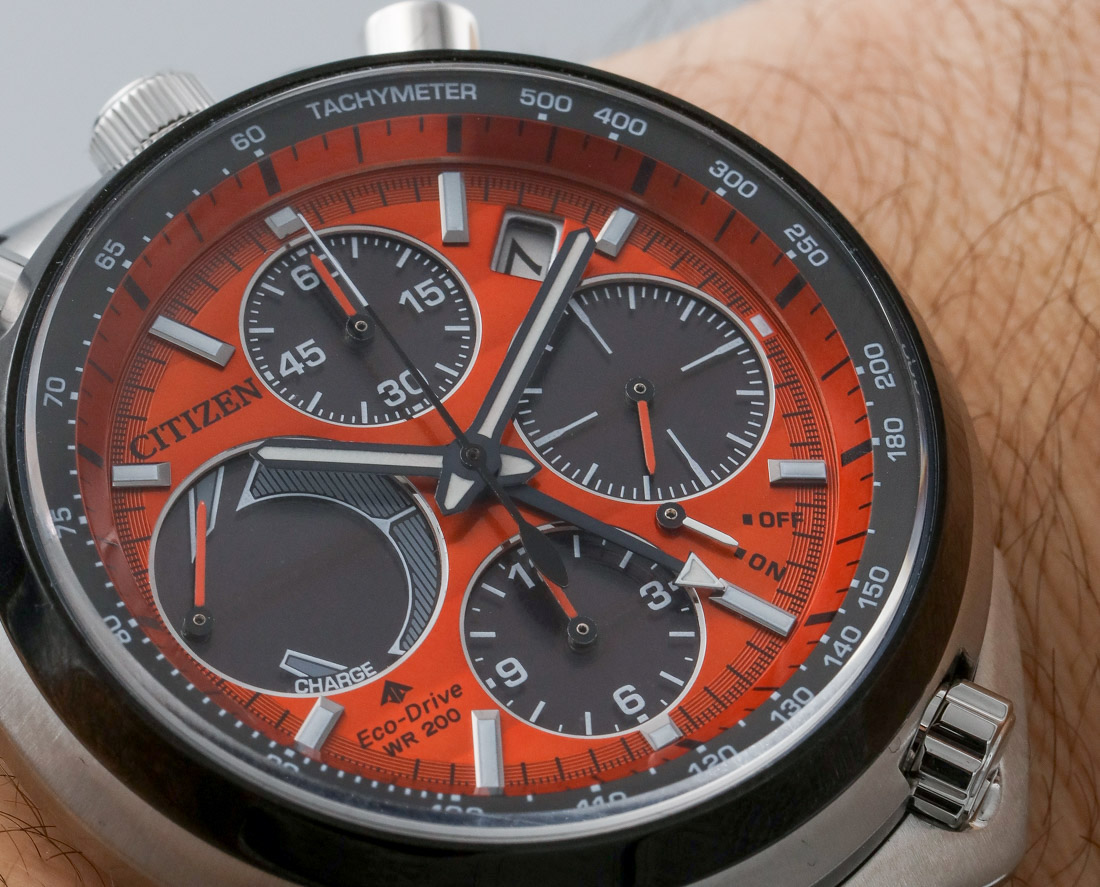 Over the course of Baselworld 2018, we saw Citizen branching out and releasing models that are quintessentially Citizen instead of the slump of watches that “kinda look like” another model – and that gets me excited to see what else Citizen has up its sleeve. If I had to describe the Tsuno Chronograph Racer, it would be charming. It’s different enough that it’s noticeable, there are plenty of functions that make it a formidable daily wearer, and it manages to not jump head-first into a river of gimmicks. This watch won’t be for everybody, but it certainly features a lot to like if you want something everyone doesn’t already have. The Citizen Tsuno Chronograph Racer will be limited to 1,973 pieces each, and carry a price range of $795–$895 depending on the model, though I imagine it’s with and without a bracelet. citizenwatch.com