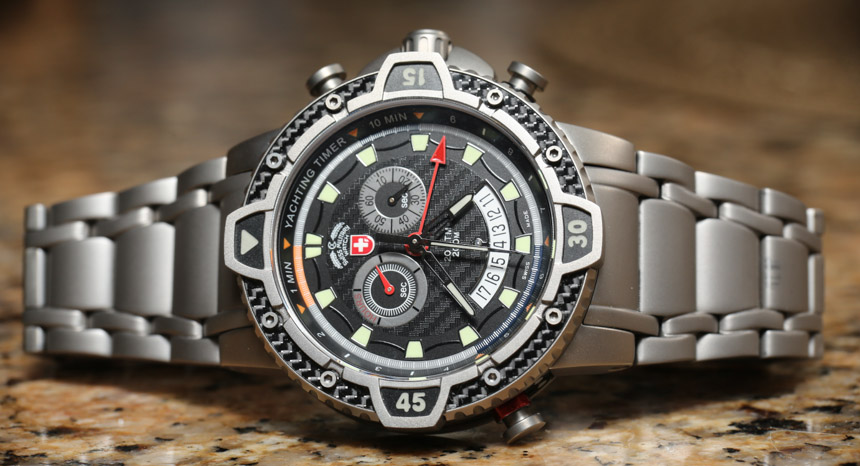 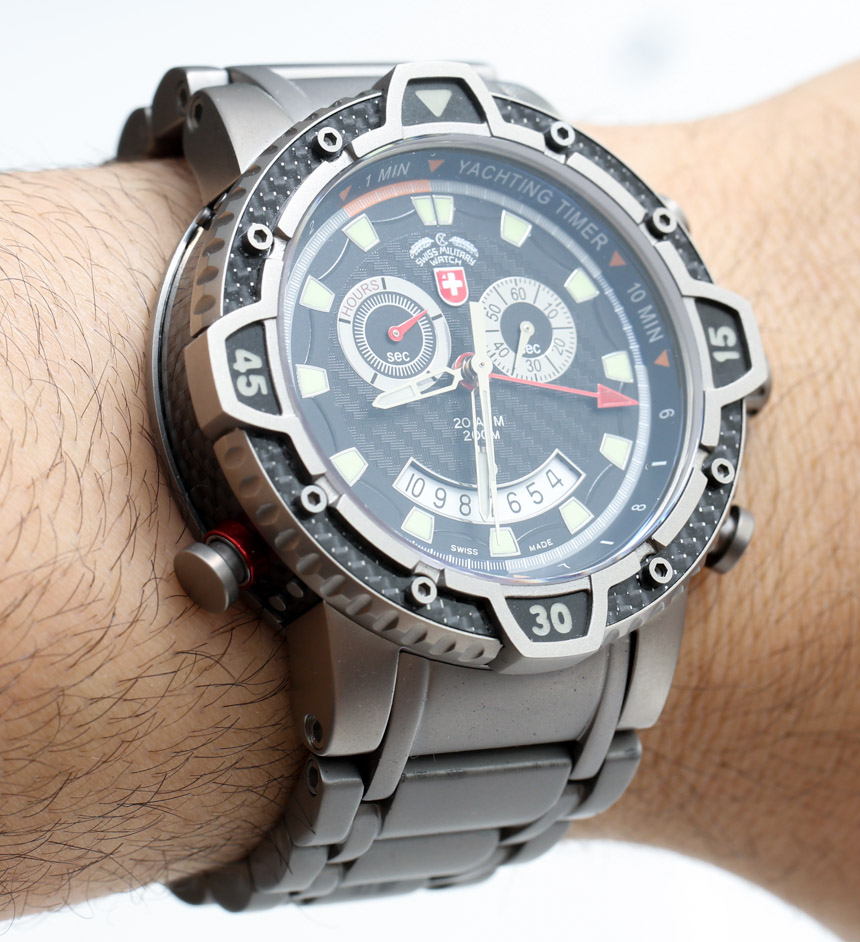 CX Swiss Military watches are produced by Charmex in Switzerland. We’ve long since been a fan of their sometimes quirky, and sometimes very cool military style sport watches. Today we are going to review a yachting timer, the Typhoon. To this day one of my all-time favorite timepieces is the Swiss Military 20,000 Feet Diver (aBlogtoWatch review). While decidedly silly, the 20,000 Feet Diver was an excellent watch. While its intended purpose will never be needed by mere mortal humans, it is wonderfully executed as being about as good a watch as could be expected with an ultra thick case in titanium meant for hanging out on the bottom of the ocean. Today we change direction to look at a watch meant to be used closer to the water’s surface, also in titanium. The Typhoon follows the legacy of the 20,000 Feet Diver in combining function with a bit of designer fun.

Unlike the mechanical 20,000 Feet Diver, the Typhoon is a quartz watch. The idea is to have a regatta timer, chronograph, and alarm in one watch, with a durable and cool design. Easily the nicest part of the Typhoon is the case and bracelet. Swiss Military Watch really went all out with the case design and construction. The 45mm wide case is like nothing I’ve seen before in terms of detailing. The case is produced from titanium and elements of carbon fiber. There is a large rotating bezel around the dial and three pushers as well as a screw-down crown. All the detailing on the case is interesting, from the many titanium screws to the carbon fiber wrapping around the side of the case.

This is easily one of the most interesting case designs available at this price point, and I think a lot of people will enjoy it. The size isn’t too big given the smaller lugs, and over the dial is a sapphire crystal. The watch is further water resistant to 200 meters. I suppose that makes sense for a watch meant to be around water. However, Swiss Military also produced a version called the Typhoon Scuba. That was inherently the same as the standard Typhoon, but has some different dial color treatments and comes on a rubber diver’s strap, versus this titanium bracelet.

While it is possible some people won’t be in love with the design of the case or all that carbon fiber, you have to admit there is little else out there like it. I personally find these features to be highlights of the Typhoon watch. In addition to being in titanium, the bracelet features a unique design and tapers a bit down to the fold-over deployant. I actually found that when I sized the bracelet to my wrist, it was a bit snug when trying to remove it over my hand. I do have small wrists, but if this is an issue then maybe CX should have created a deployant that opens up a bit more. Unless you have small wrists though, that isn’t likely to be an issue. Also, given the type of titanium used, the bracelet is likely to start showing signs of wear such as scratches and scuffs soon. 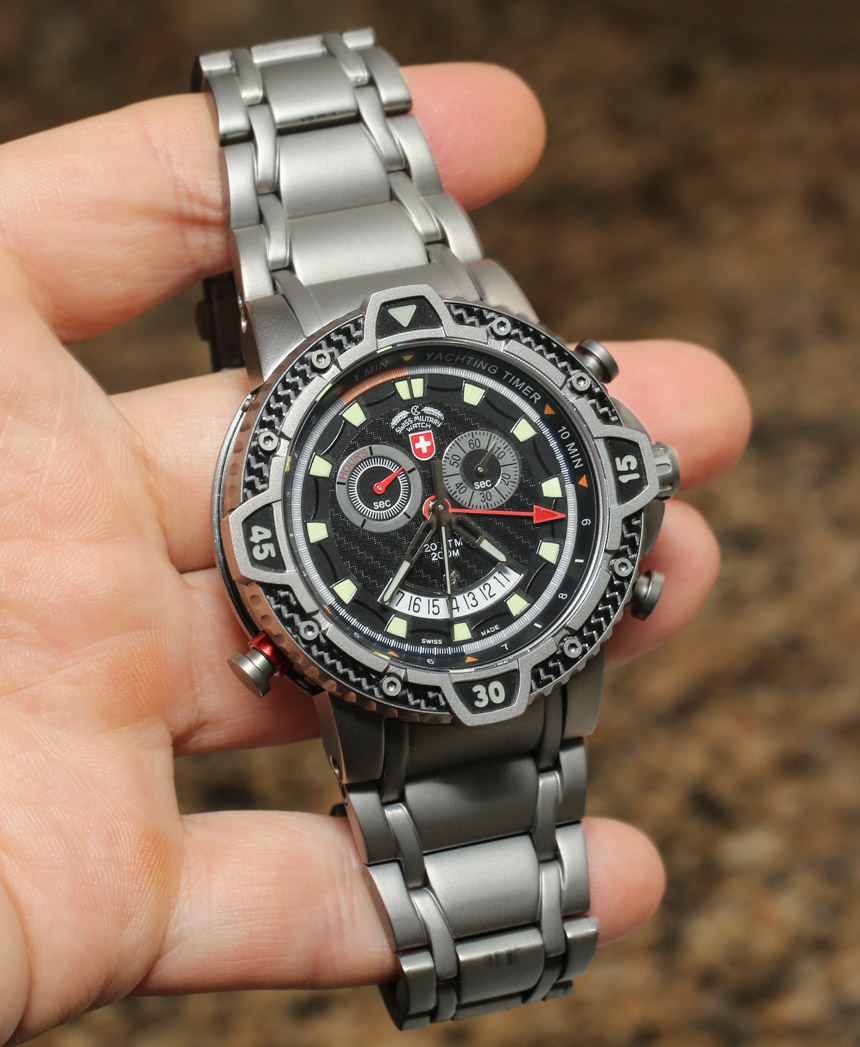 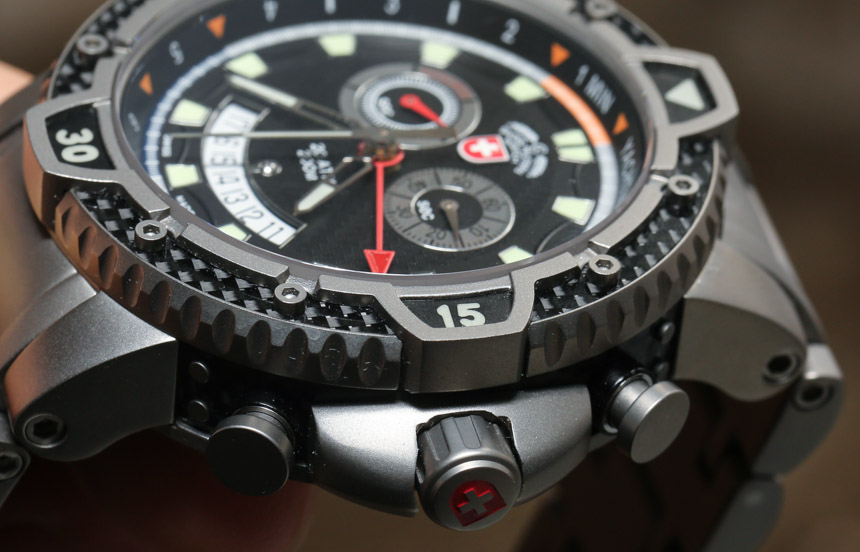 Regatta watches are named as such for having special countdown chronographs. Boats in sailing races actually begin the race in motion at a set point. So regatta timers are designed as countdown timers allowing ships to be at the starting point at the right moment, but already in motion. Regatta timers are ten minute countdown chronographs. That is the case here, but the system is a bit more complex than that. It all works pretty well, but I feel that dial aesthetics do suffer a bit given the layout of the movement.

In addition to the hour and minute hands on the dial, there is a chronograph minute hand, as well as an alarm hand (more on that shortly). First of all, while easily functional, I feel that the hour and minute hands could have been increased in size a bit, especially to more harmoniously match with the large hour indicators. The SuperLumiNova lume on the hands and indicators is also quite effective. The chronograph minutes hand has an eccentric “0” position at the start of the countdown timer at 2 o’clock. As a fan of dial symmetry, I sort of want it to be at 12 o’clock. 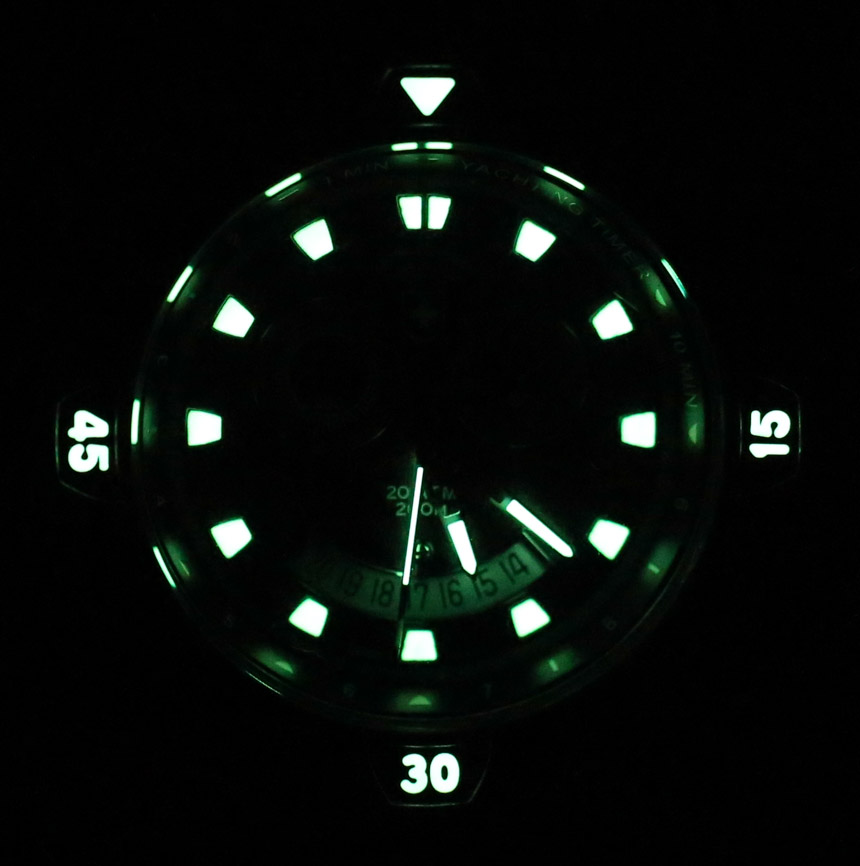