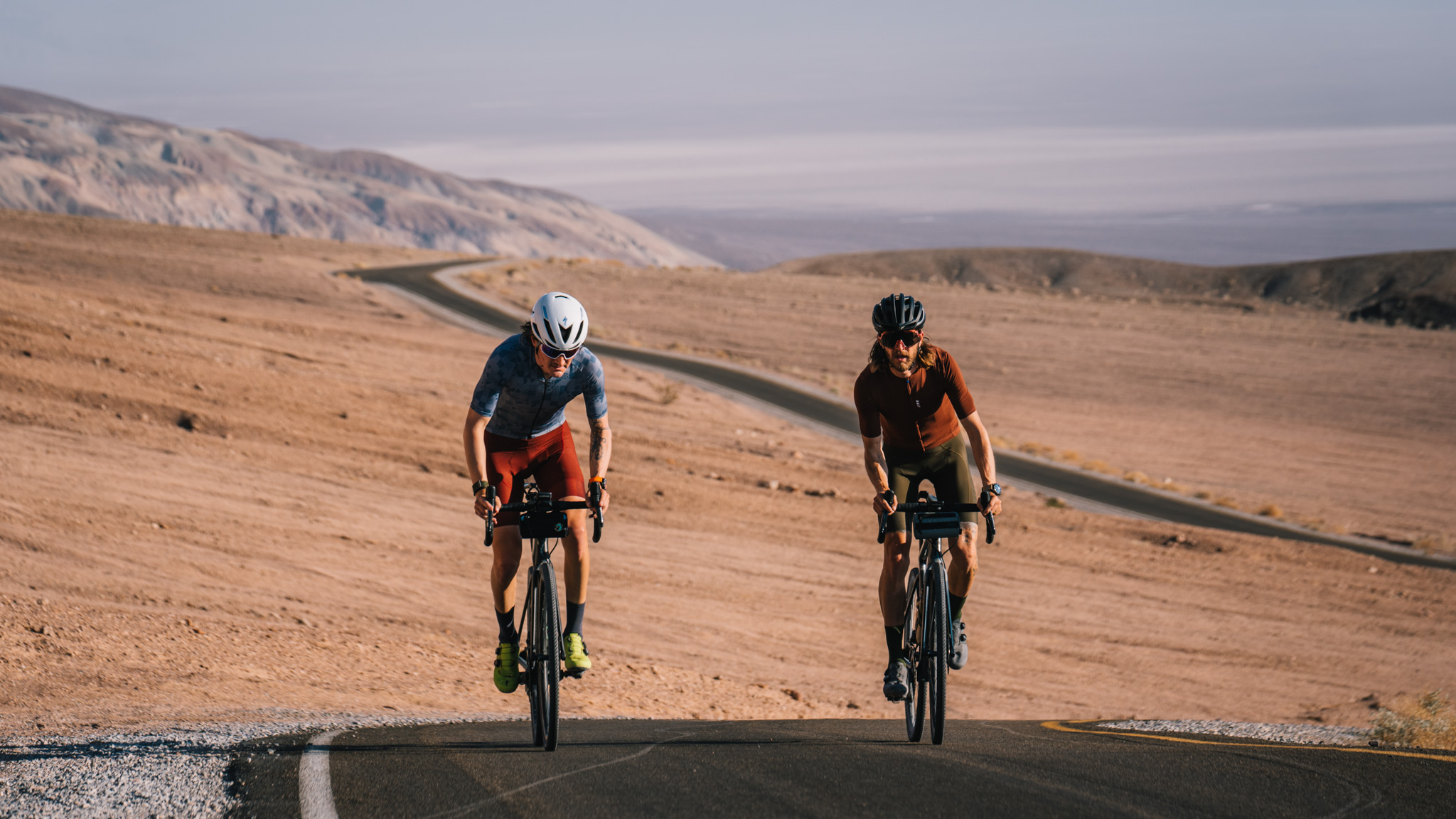 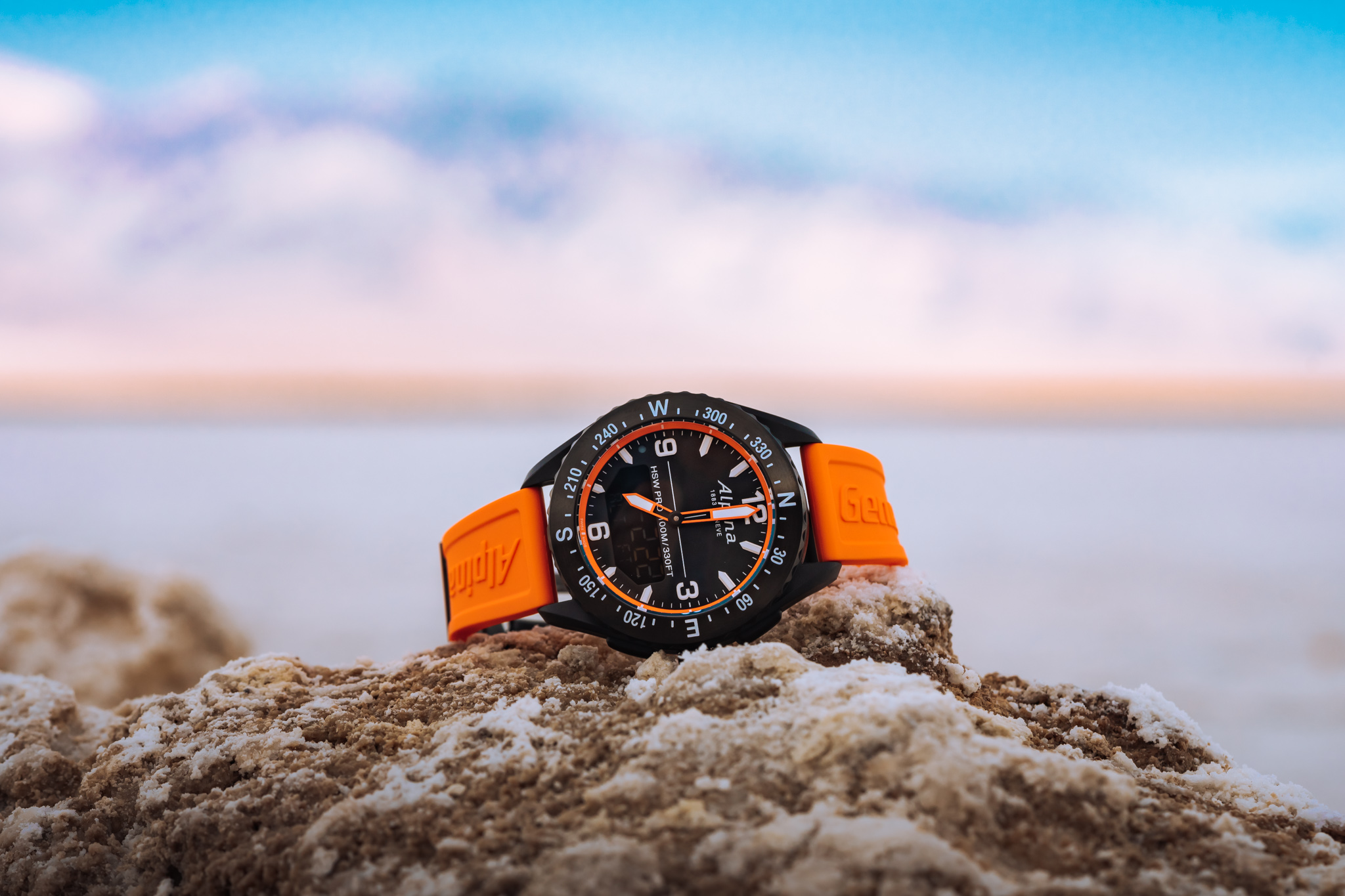 The headache comes swiftly. I was fine only moments ago, but I’ve suddenly become dangerously overheated. The Alpina AlpinerX on my wrist reads 106º F as I pedal into a ferocious desert headwind. I glance down at my handlebars where the head unit shows 375 watts — a modest effort as the bike fights to descend a smooth stretch of asphalt in the shadow of Artist View’s famous multi-colored rainbow layered striations, ancient geologic remnants from the valley’s volatile, volcanic past. I yank my bottle from its cage and squeeze a stream of water over the back my of neck. The liquid is already hot, only adding to the discomfort rather than offering relief. Pausing to take stock of my surroundings, I’m not sure I can remember being quite so uncomfortable in such a stark, beautiful place. Such is cycling, and such are the incredible extremes found in California’s Death Valley National Park. 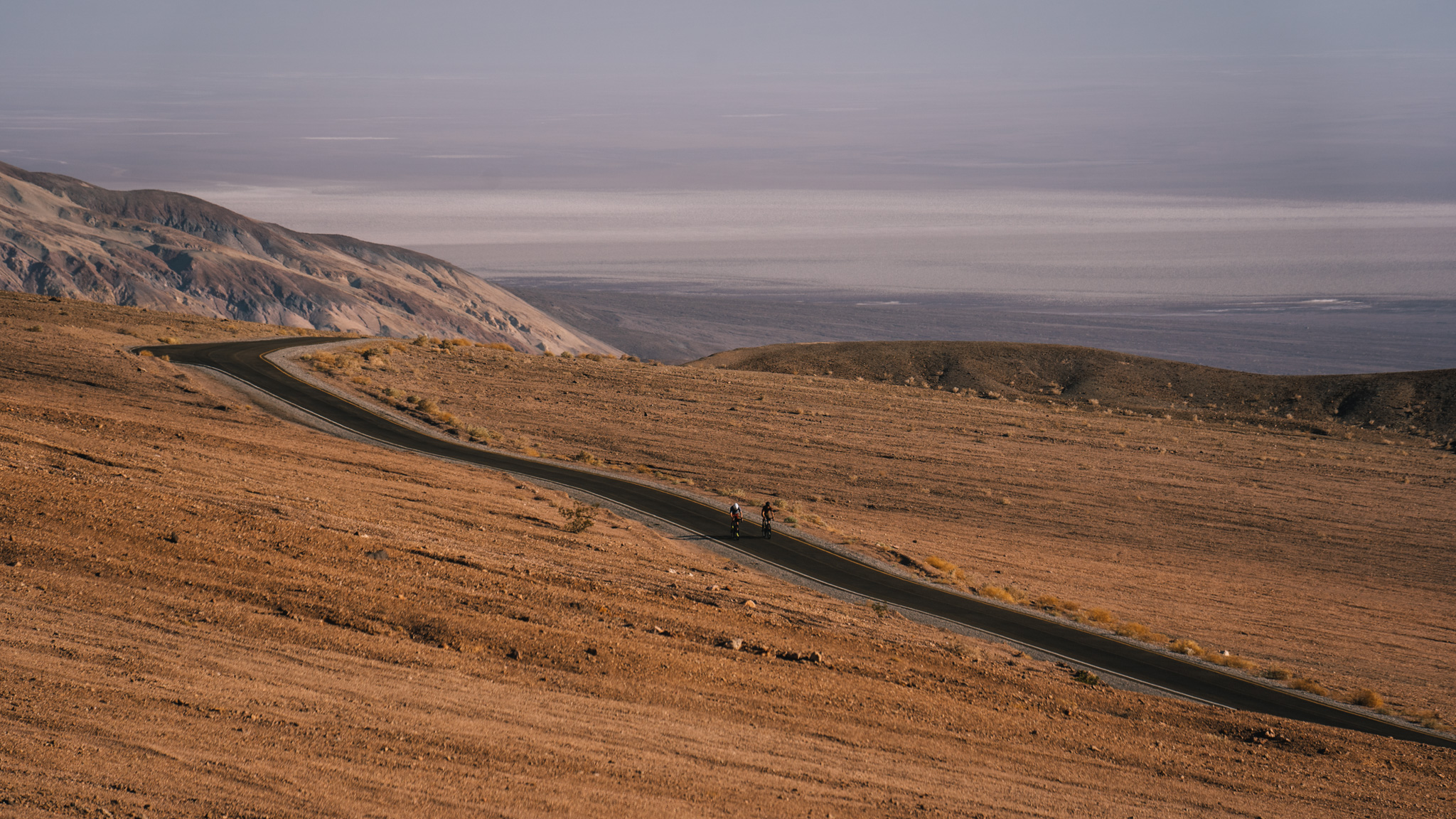 Death Valley is a place that proudly embodies the superlative, yet still manages to defy description. It is at once enormous, larger than the state of Rhode Island, with a barren expanse that yields seemingly uninterrupted draw distance across the entirety of the valley, creating an optical illusion that plays tricks on the mind. Even in the cooler morning air just after sunrise, it’s eerily difficult to discern distance or ride progress without notable landmarks to focus on. Its horizon is one sandwiched by two peaks, defined between by an eerie sort of emptiness filled with dolomite, syenite, and scraggly mesquite bush. But flick a magnifying glass over a map of its confines and the park’s three million acres are suddenly filled with secrets, connected by a web of roads and trails — some paved, though most requiring some special sort of vehicle to explore. It’s a place whose size and rugged beauty are rivaled only by just how damned inhospitable it feels — so naturally, we had to explore it by bike. 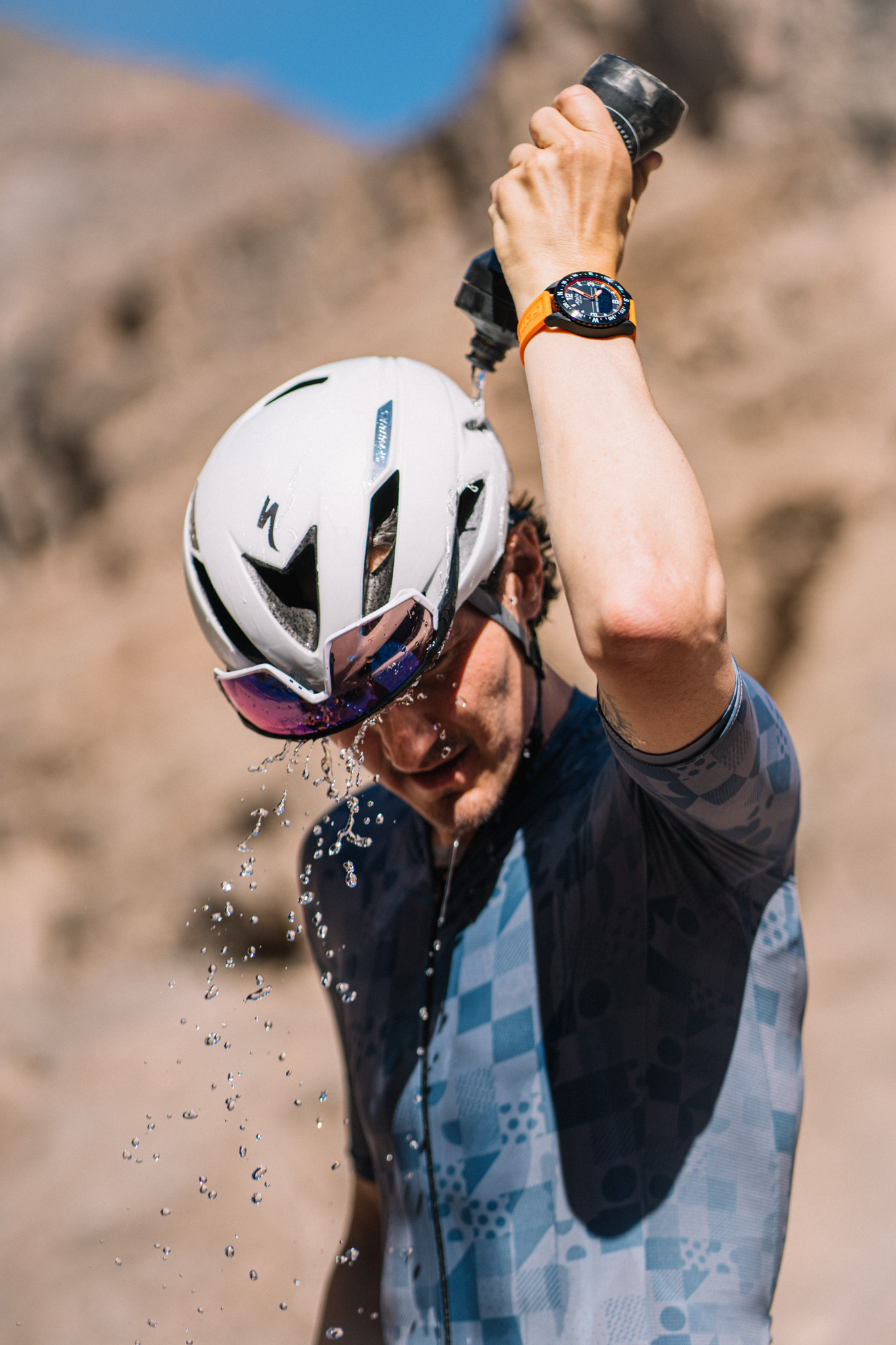 The dehydration headache is a sensation I’ve felt many times before – go too hard or too long without replacing enough lost fluid, and one of the body’s survival mechanisms kicks in, yielding a series of strikingly unpleasant symptoms. Cramps are the most familiar refrain, but it’s the headaches that leave their mark long after the ride’s done. See, in a dehydrated state, the brain begins to slowly contract, pulling itself away from the sides of the skull and resulting in a dull, persistent ache as you fight to turn the pedals, dreaming of ice-cold Topo Chico, Red Bull, Mexican Coke, or maybe of pulling the ripcord entirely and hitching a ride from a passing air-conditioned vehicle. 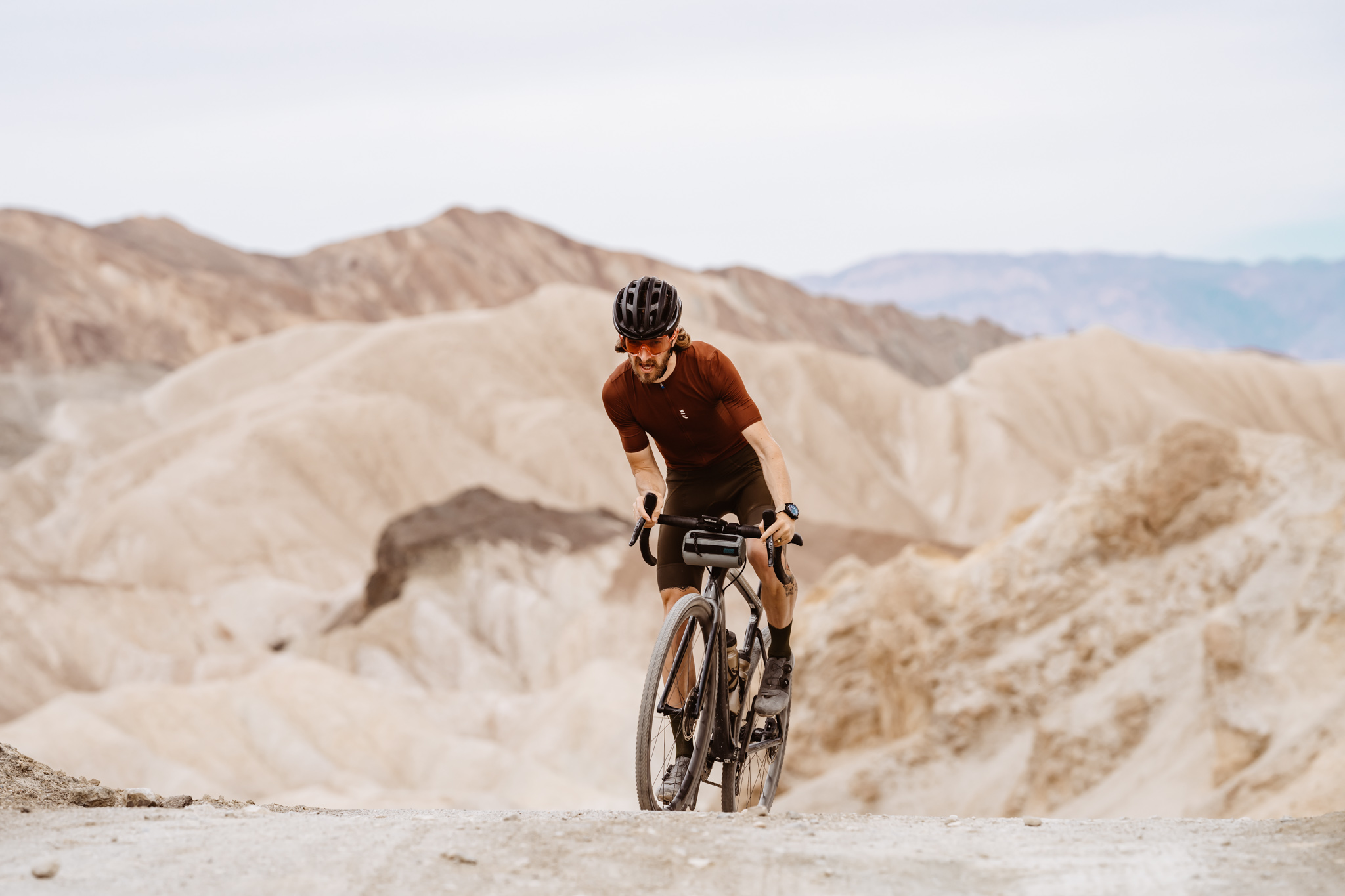 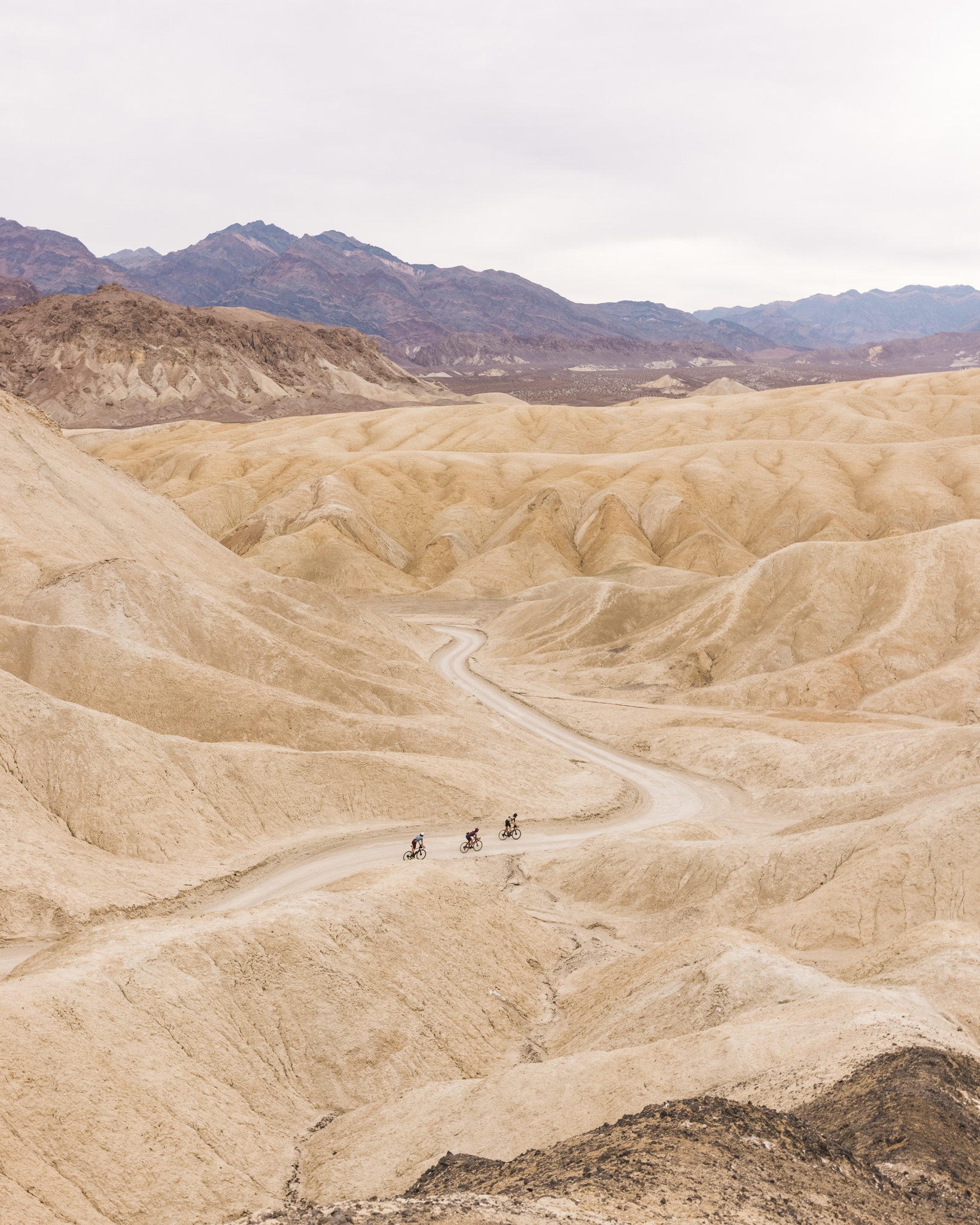 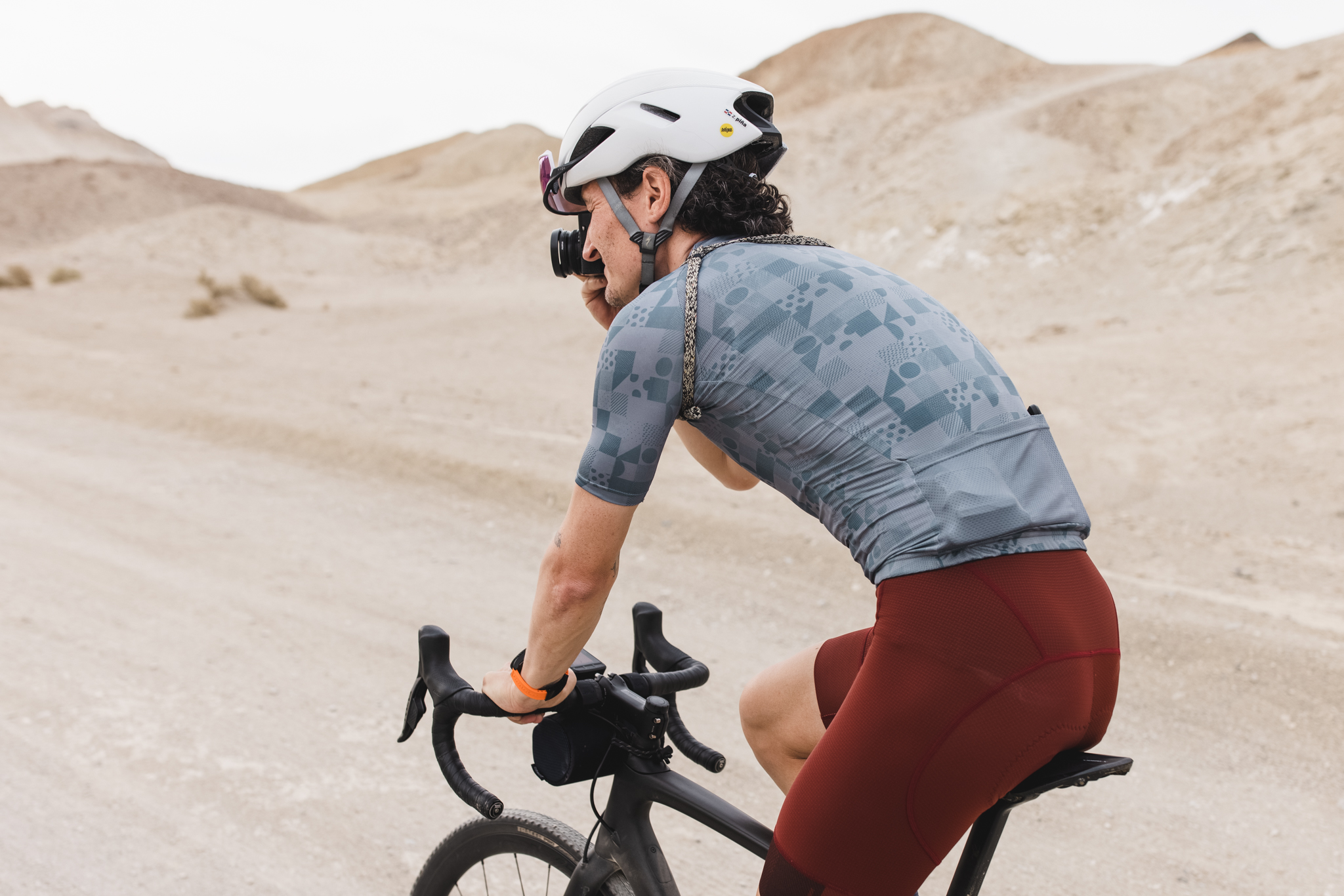 The initial ride plan was a monster — a self-supported adventure from Yosemite to Death Valley over the course of multiple days, riding no less than 70 or 80 miles per day. But California’s southern desert regions got an early jump on the heat this year, so we prudently amended the route, focusing instead on Death Valley mixed-terrain environment where we could carve out smaller, bite-sized pockets of the park to explore at “Photo Pace,” which is to describe both a San Francisco Bay Area cycling collective, as well as a slower, more methodical approach to riding a bike, in which documenting the experience through both film and digital viewfinders enables a greater appreciation of the rhythm of the earth as it rolls beneath plush, 35mm tires. 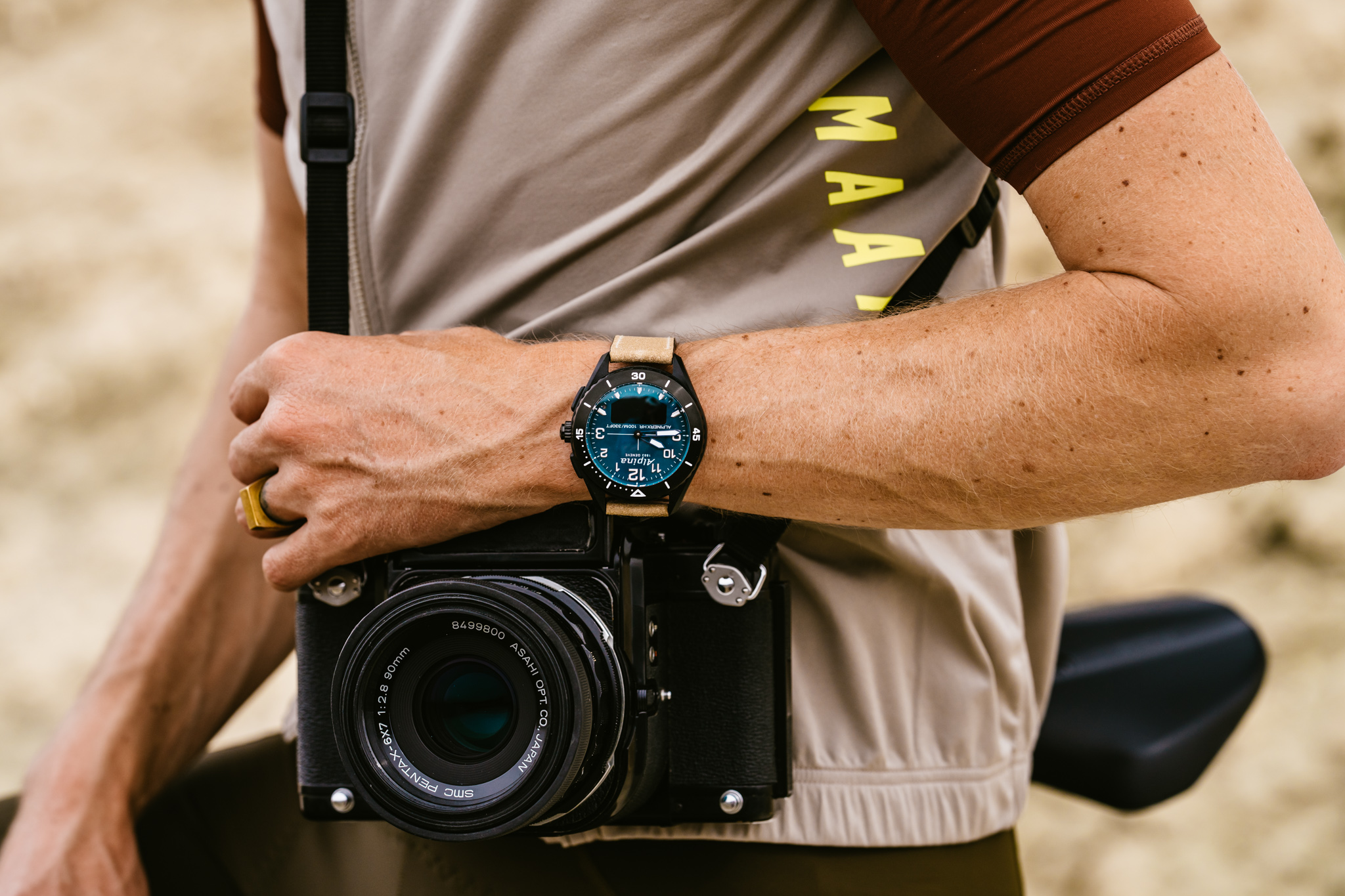 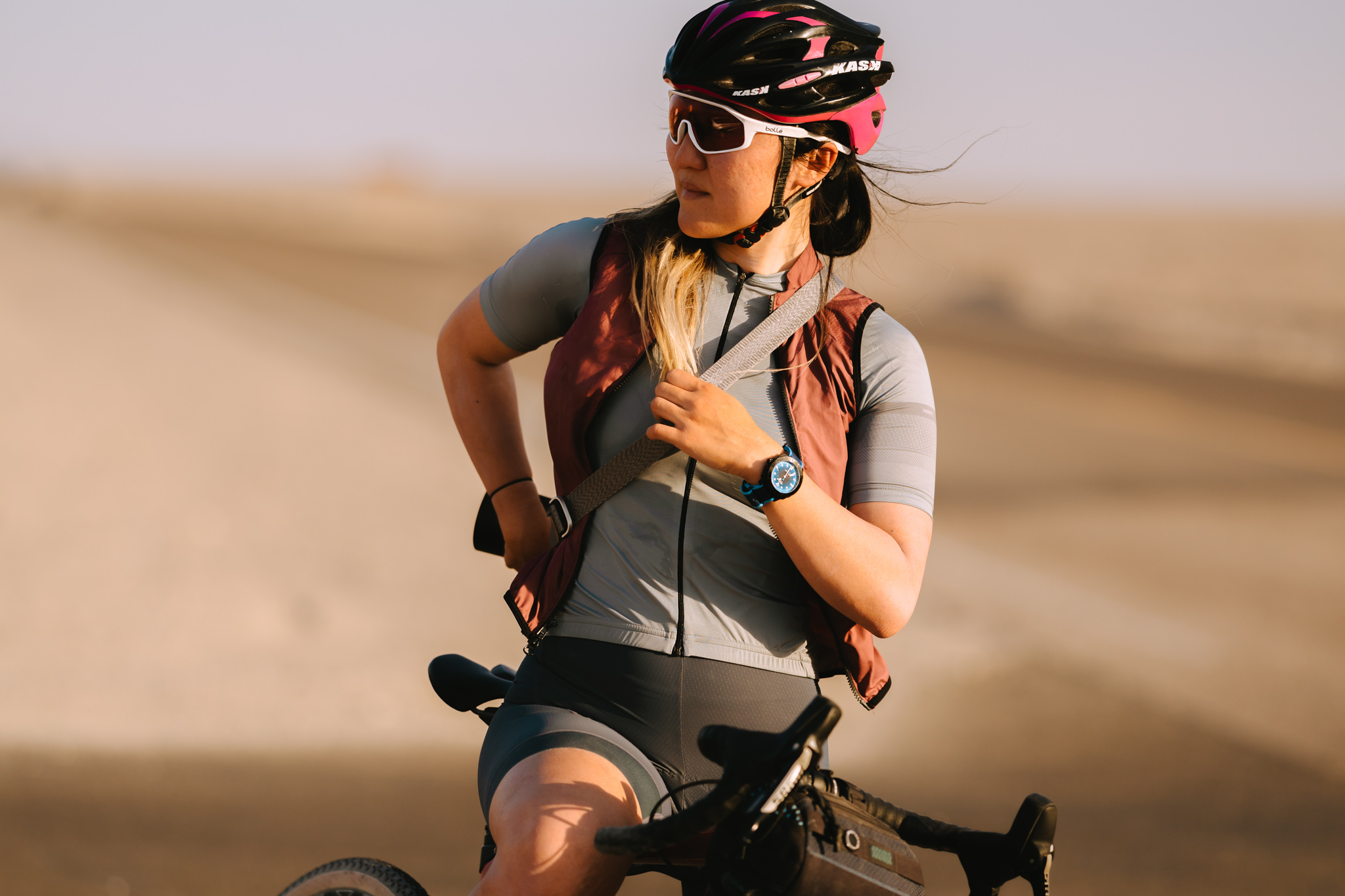 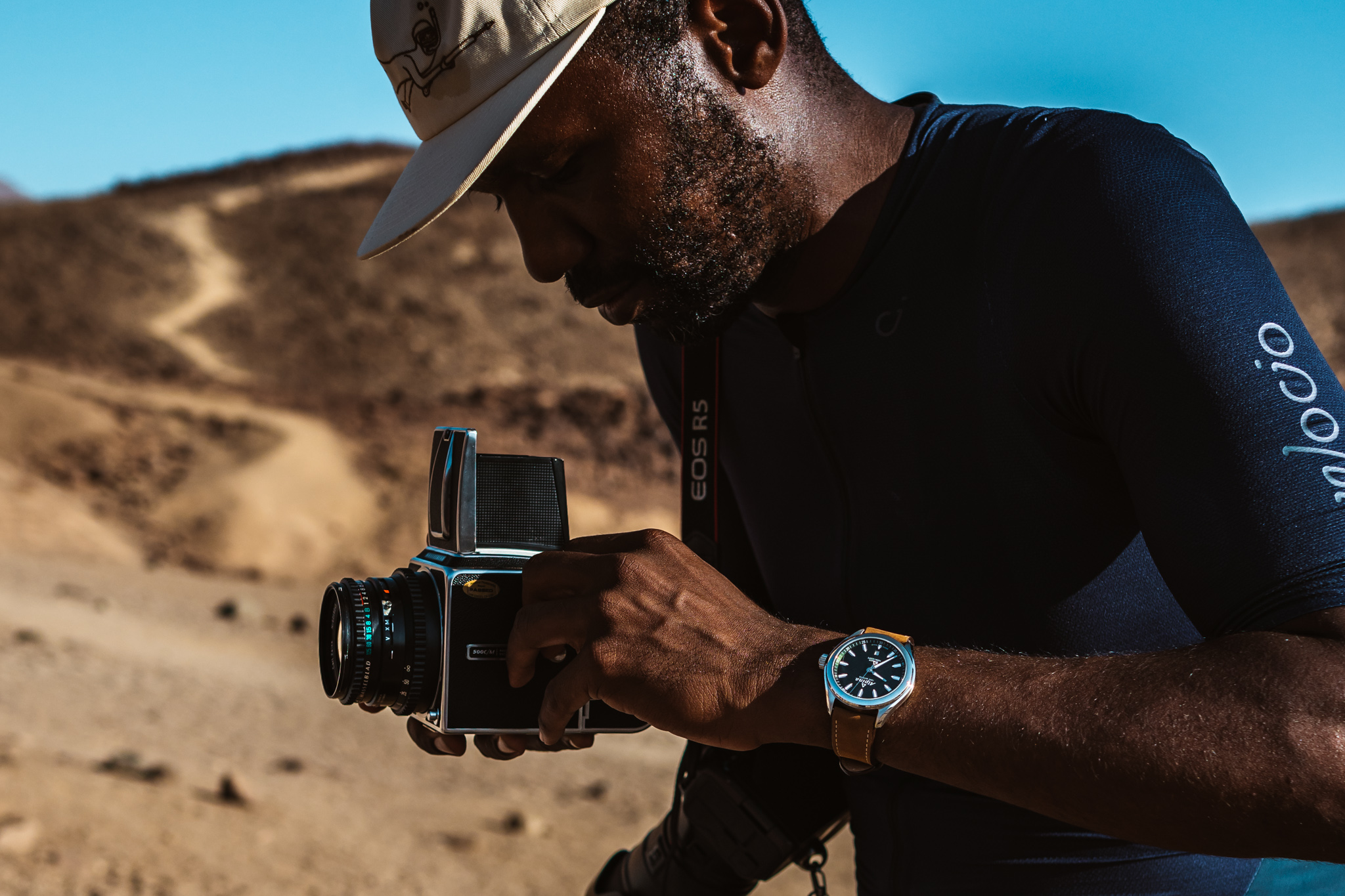 Our day might have begun under light cloud cover at Badwater Basin — the lowest point in North America and an incredible section of the park where sea level sits well above eye level, nearly 300 feet up the side of the nearest canyon wall. But once the cloud cover bid farewell, I took to nervously watching my wrist as the temperatures soared, continuously taking stock of my water supply in each bottle. Eighty-five degrees. Ninety. Ninety-five. One hundred. “It’s a dry heat” became the nonsensical joke of the day whenever someone remarked on the heat. Indeed it was, but it was still hot as hell for a quartet of humidity-loving fog-dwellers from the Pacific Coast. 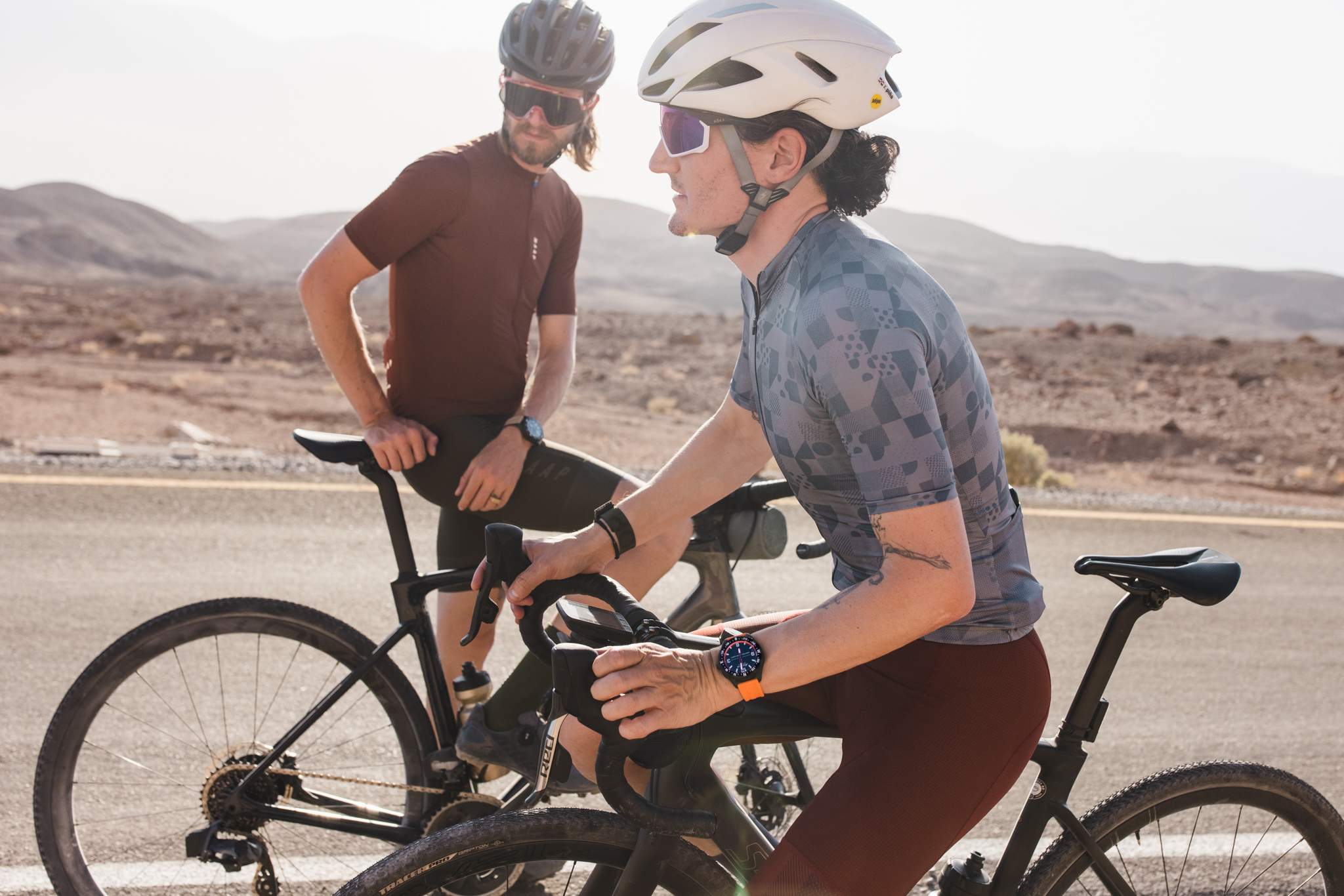 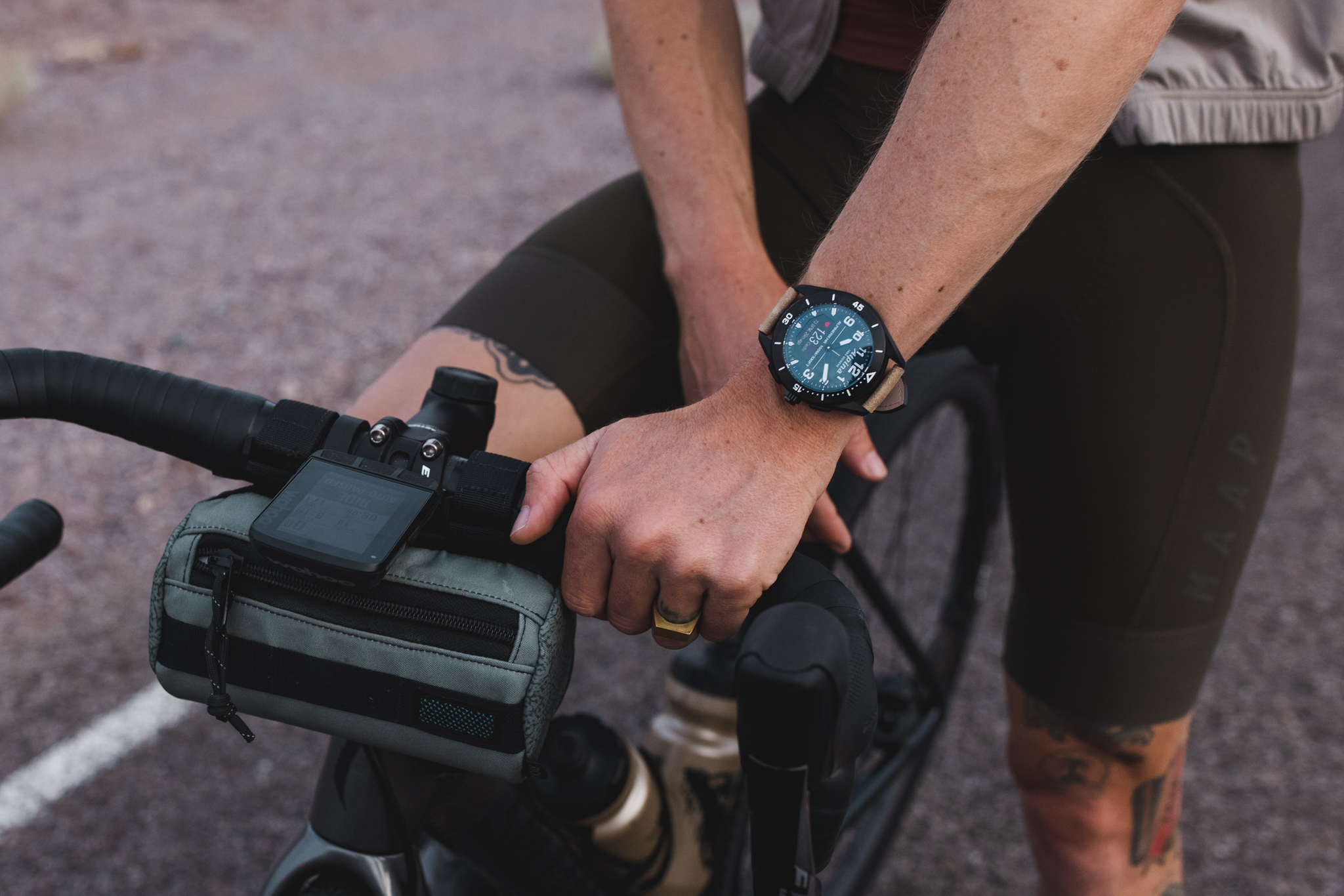 In addition to the current temperature, Alpina’s ultralight AlpinerX and its heart rate sensor-equipped cousin AlpinerX Alive display a wealth of valuable information that ought to come in handy for anyone traversing gravel trails in the desert. In addition to the multiple time zones, alarms, and timers, this cleverly disguised tool watch is actually a sophisticated “ABC” watch housing an altimeter, barometer, and a compass. There’s even a UV indicator that is crucial for measuring the strength of sunburn-producing ultraviolet rays — a vital feature for both alpinists and desert-dwellers alike. Thankfully, we found pockets of shade from the relentless midday sun while exploring the tall, colorful walls framing Titus Canyon. 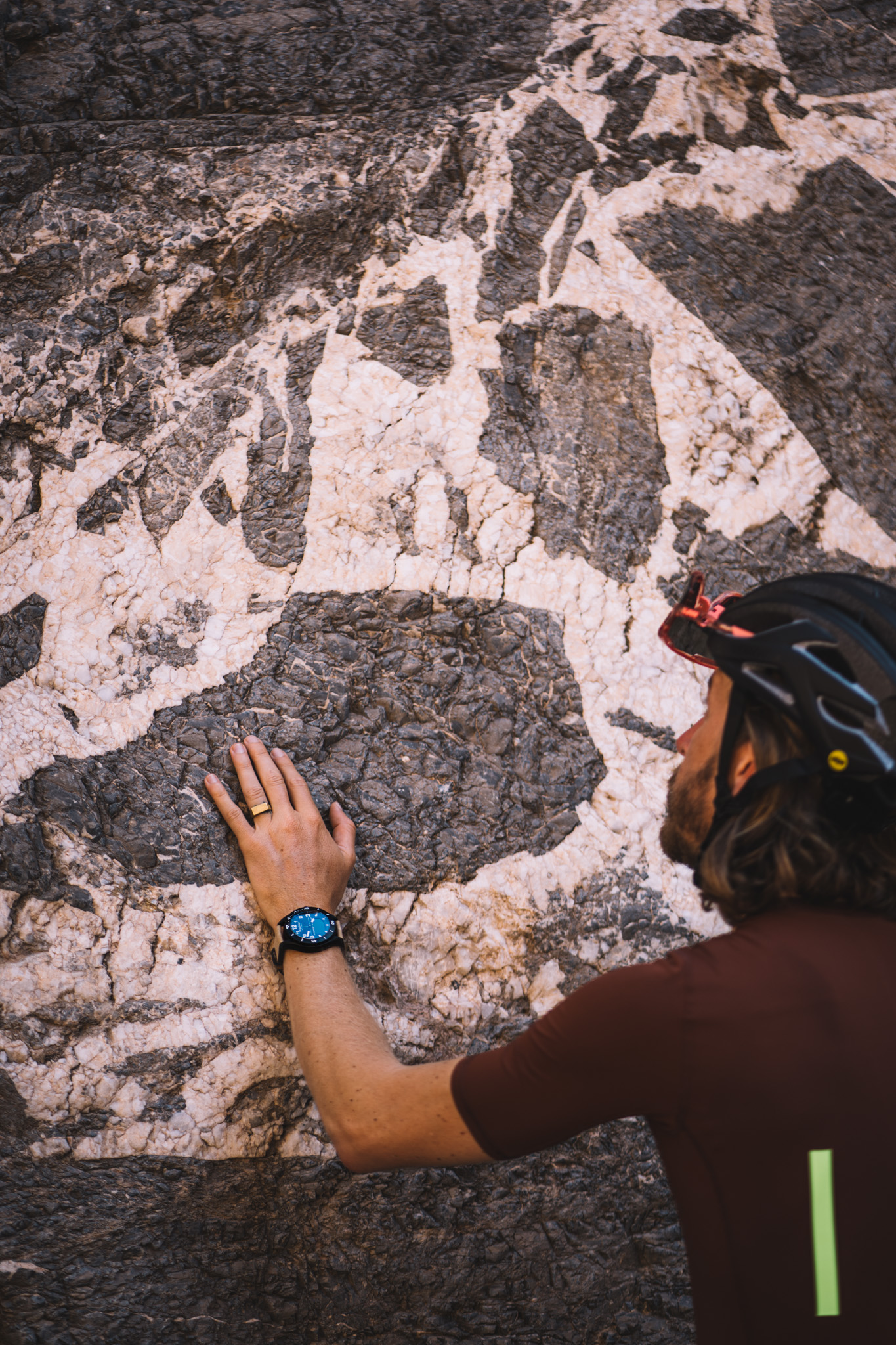 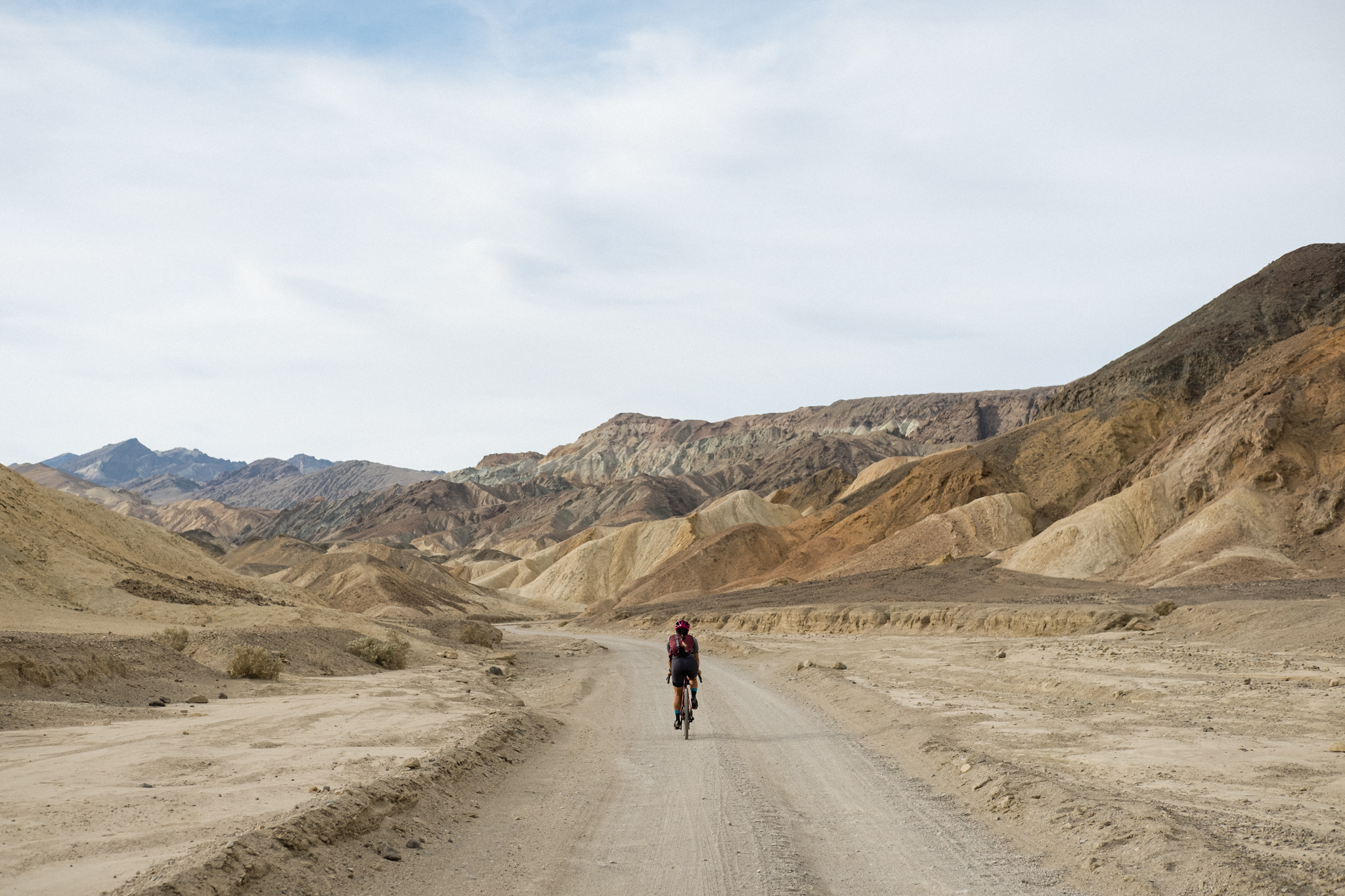 “We have become great because of the lavish use of our resources. But the time has come to inquire seriously what will happen when our forests are gone, when the coal, the iron, the oil, and the gas are exhausted, when the soils have still further impoverished and washed into the streams, polluting the rivers, denuding the fields and obstructing navigation.”

So said the twenty-sixth president of the United States Theodore Roosevelt – a champion for the natural world and an outspoken supporter of the National Forest Service and National Park Service. Even from the National Park Service’s founding over a hundred years ago, Roosevelt’s bold, naturalist vision recognized a plight Americans might one day face — one where an over-dependence on resources from the natural world could leave little left of these spectacular, inspiring places for future generations to enjoy. My friends and I are indeed that generation, and it’s because of foresight from 100 years ago that we’re able to do these kinds of things now. 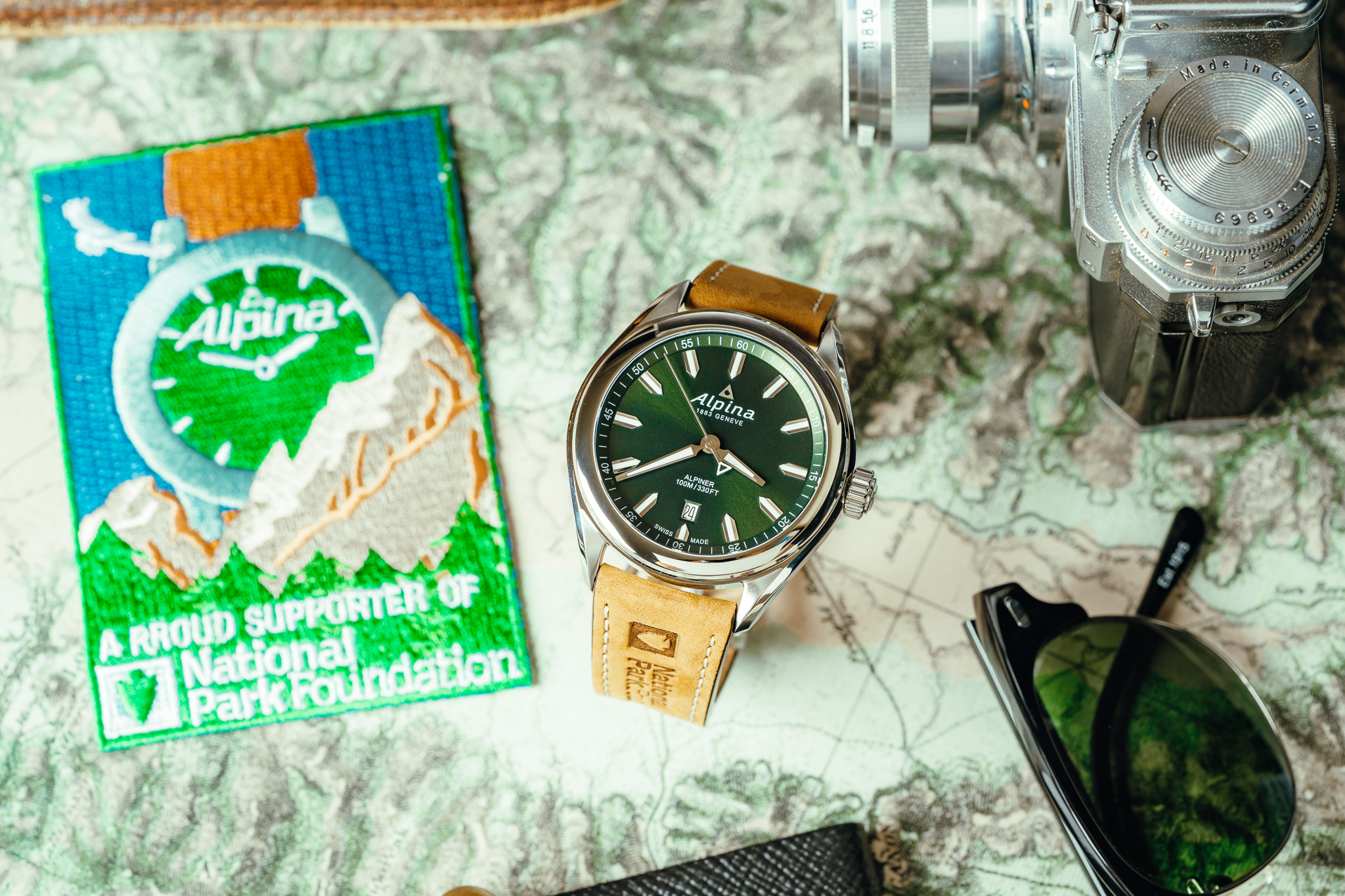 Alpina was wise to continue these traditions of looking ahead through its partnership with the National Parks Foundation on a special watch that could continue to inspire wonder and drive awareness for such future generations as our own. As the official charitable partner of the National Park Service, the National Parks Foundation works to protect wildlife and parklands, preserve history and culture, educate and engage youth, and connect people everywhere to the wonder of parks. As an official NPF partner, Alpina’s own limited edition Alpiner is a handsome, classically styled tool watch that celebrates the partnership with a brilliant green sunburst dial, a special caseback, and a commemorative patch and embossed leather strap. Taking things one step further, Alpina is generously donating $100 from every watch sold to the Foundation to help serve its goals for a minimum commitment of $320,000 through this, and other promotions by the end of 2021. 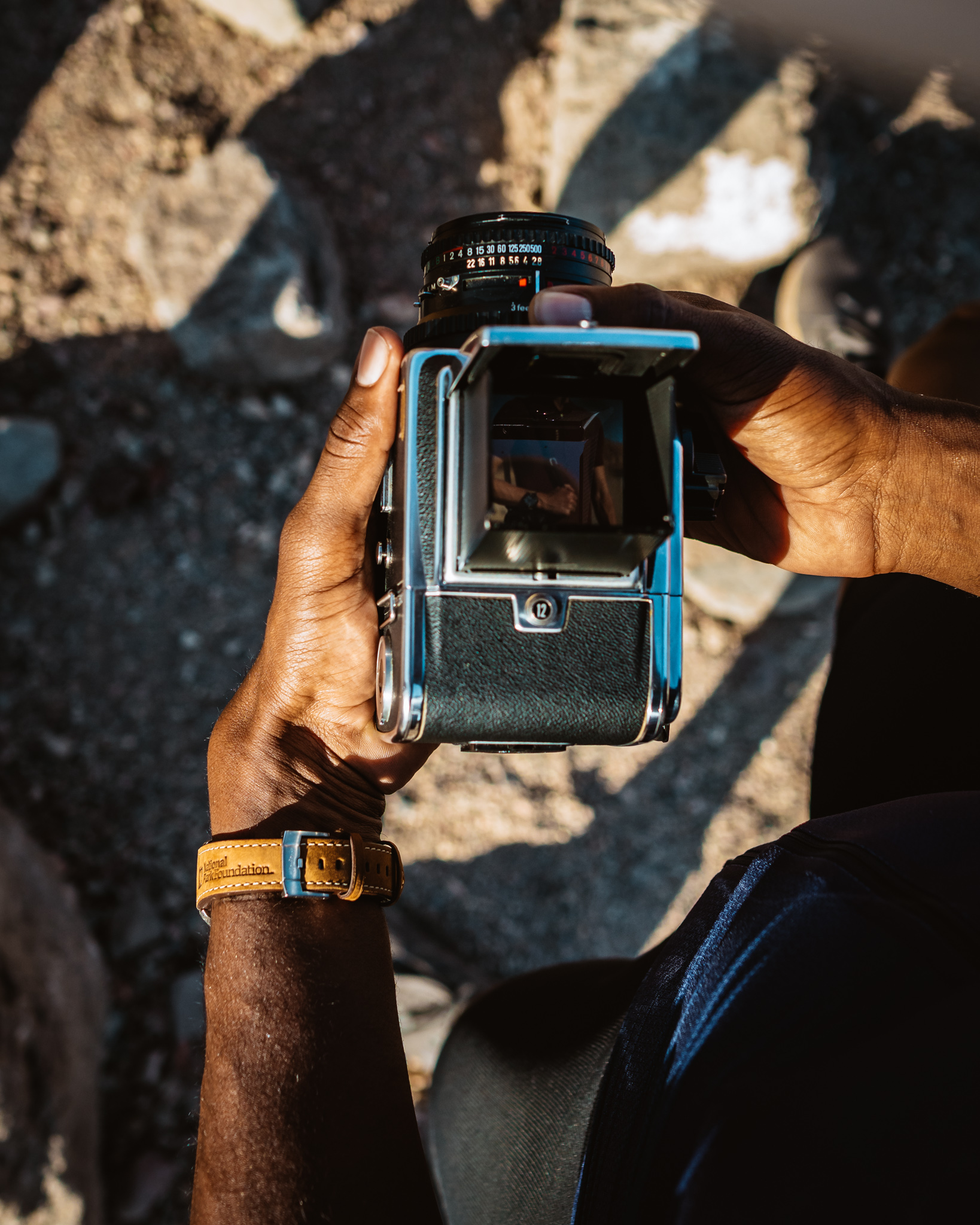 In the shimmering heat of Death Valley’s late afternoon sun, we found ourselves pedaling a buttery-smooth stretch of black tarmac that carves a dreamy, undulating ribbon through the valley’s iconic Artist View. A mirage perhaps, though certainly a dream, and one so vivid, I could feel the throbbing of my skull, and the hum of the pavement, then the rush of the hot desert wind as it mercifully changed direction and propelled us toward the sunset, flying through this hazy alien landscape with freehubs buzzing like cicadas on a scorching summer’s day. But a lucid dream it wasn’t. As a cyclist, it’s these intensely tangible sensations that we live for — uncomfortable or not. These, and that first crack of an ice-cold Coke at the end of a long day in the saddle. 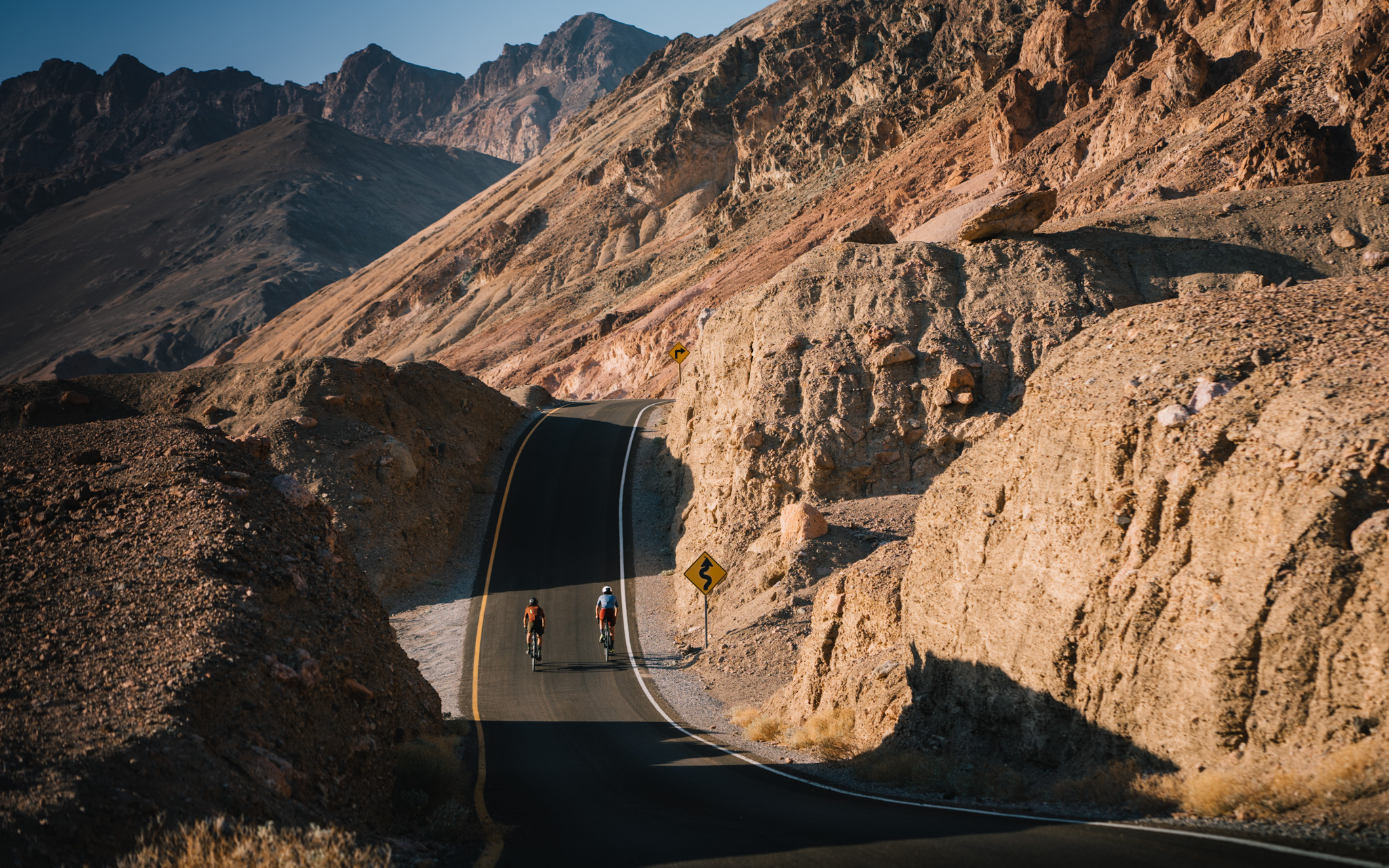 Cycling is one of those rare activities that force us to explore our own vulnerabilities while in the pursuit of smallness, or discomfort, or a snapshot of the unknown — or sometimes all three. And that’s sort of the beauty of it — the limits of each of our own physical capabilities might be different, but we’re all left to confront these strikingly similar sensations of humanity. And it was here in these moments when recent memory can’t recall feeling more uncomfortable than I did in those moments, but also more alive. 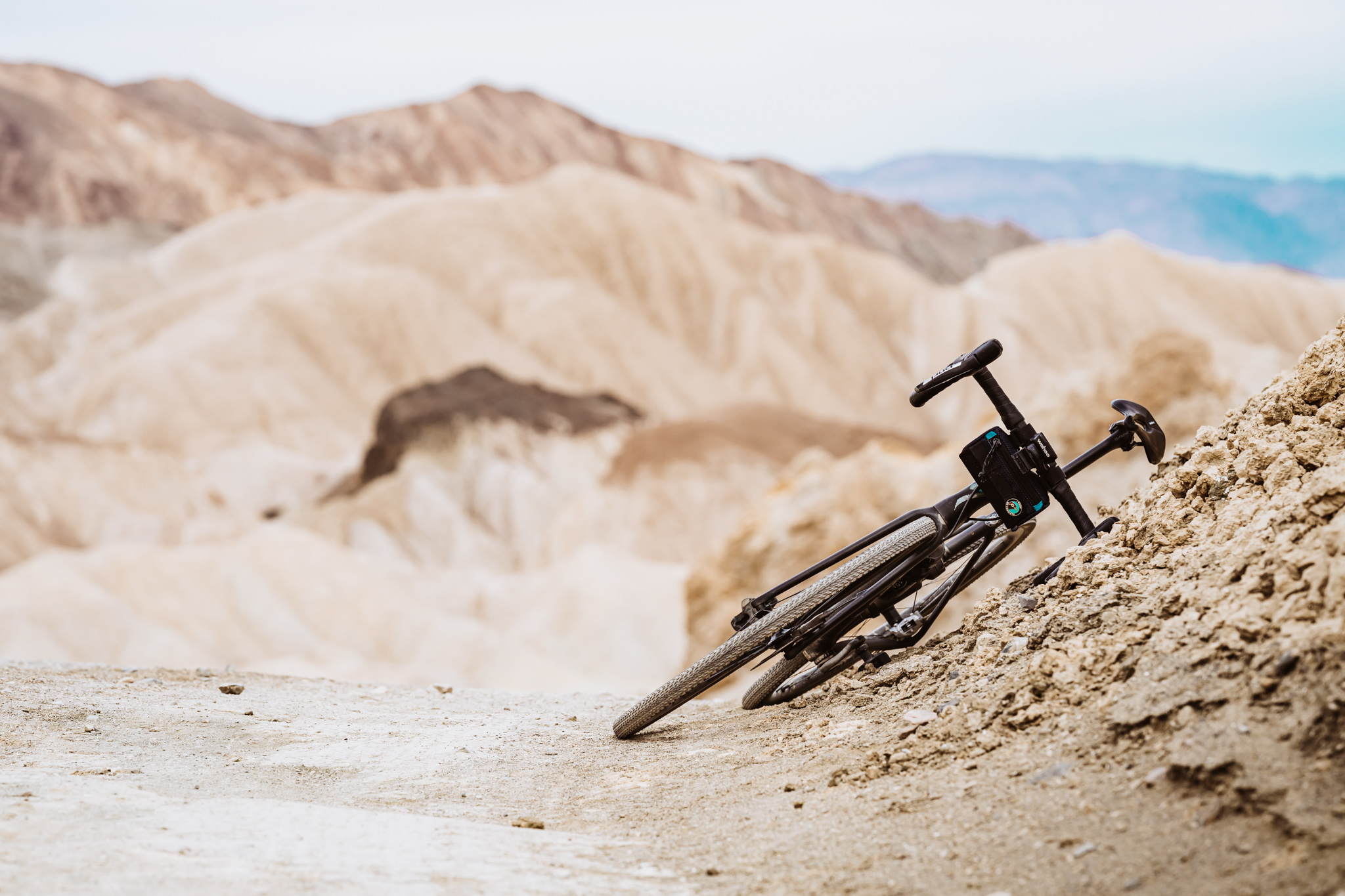 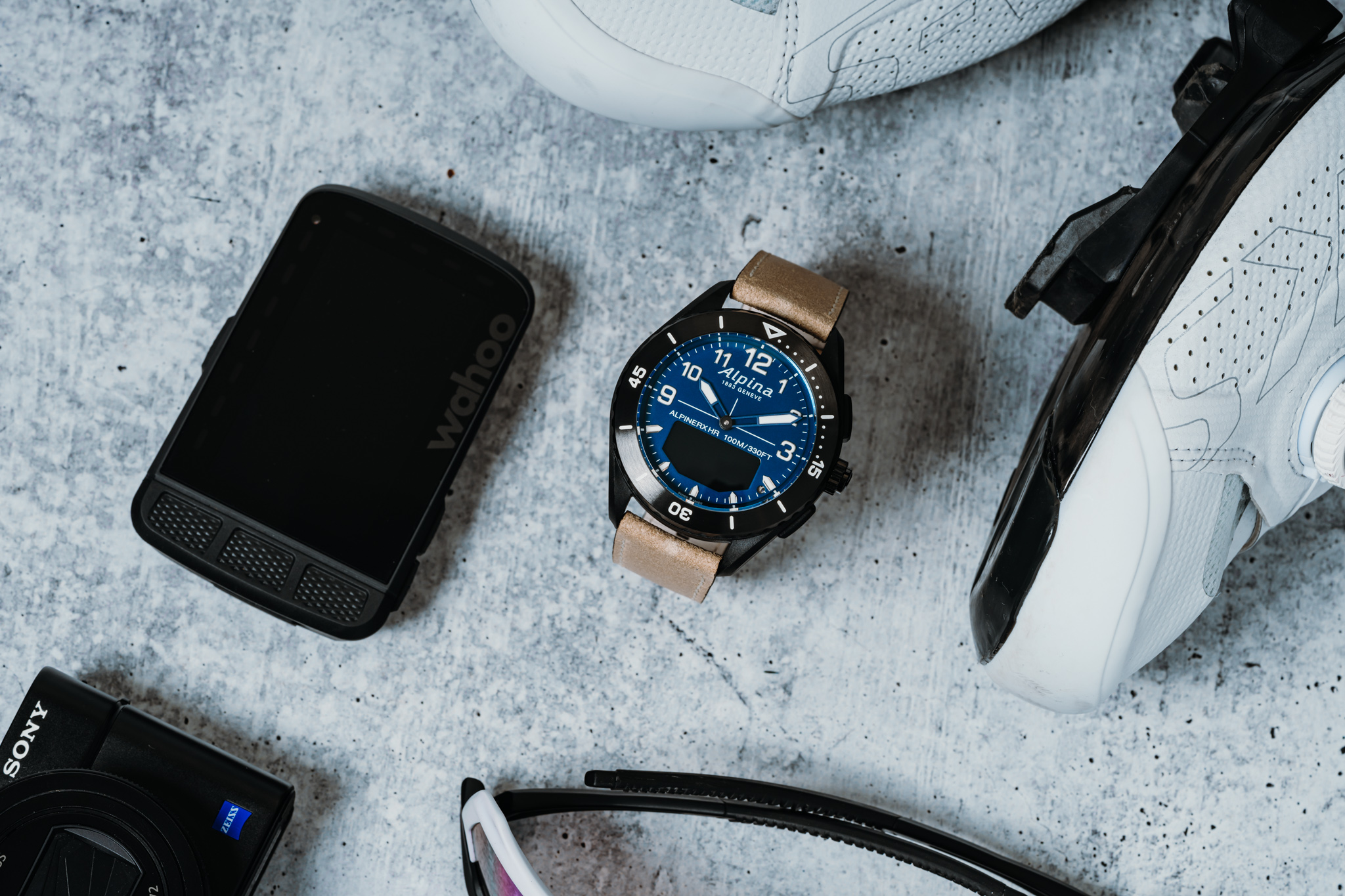 If you’re making plans for your own National Parks adventure this summer, learn more about Alpina’s limited edition Alpiner watch for the National Parks Foundation and discover the brand’s full range of classic adventure watches at alpinawatches.com. And if those plans include Death Valley National Park — be it on foot or by bike — the good people at the National Park Service would like to encourage you to always plan ahead and recreate responsibly, especially as summer temperatures at Death Valley can be dangerous in the park’s lower elevations.

See you out there. 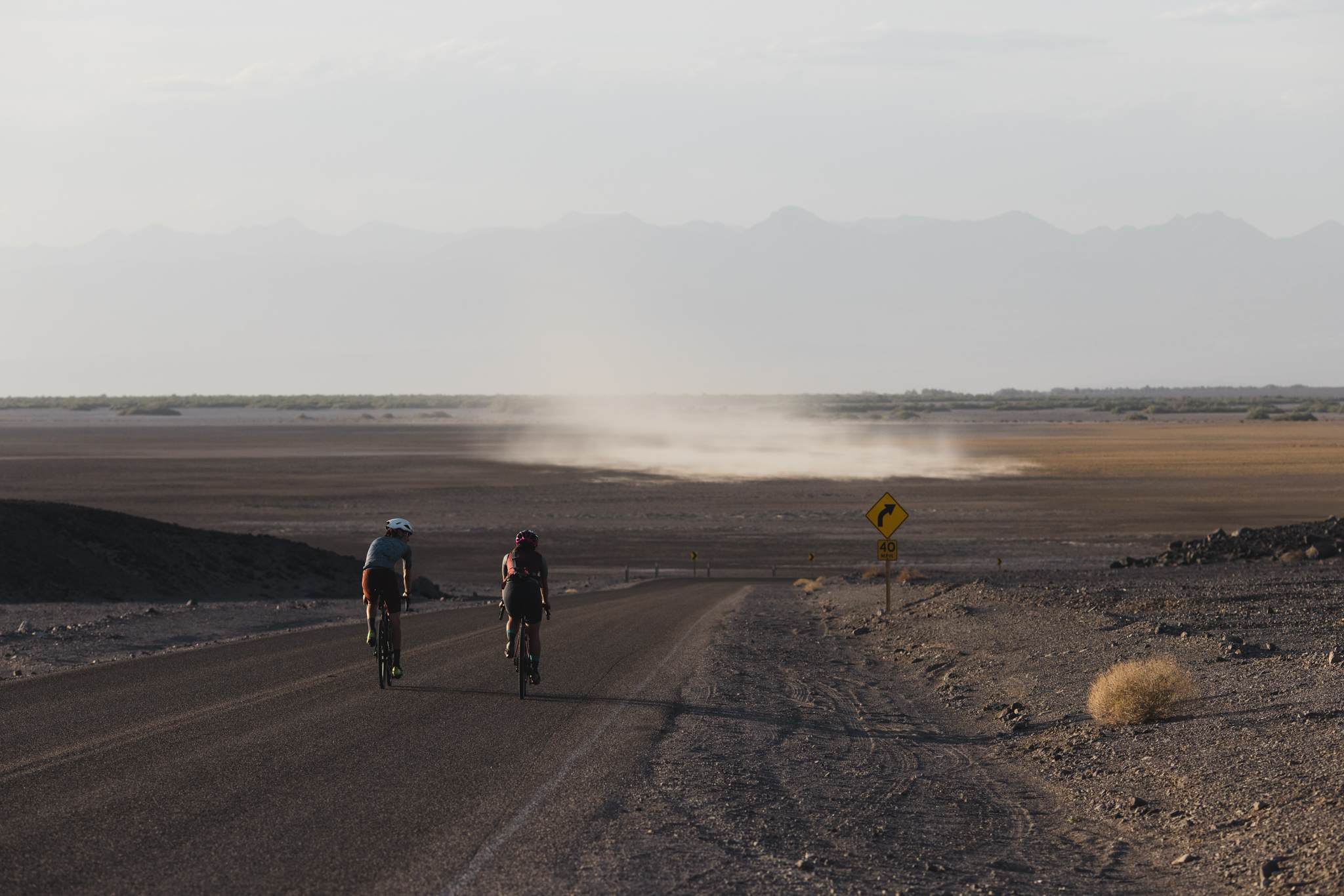 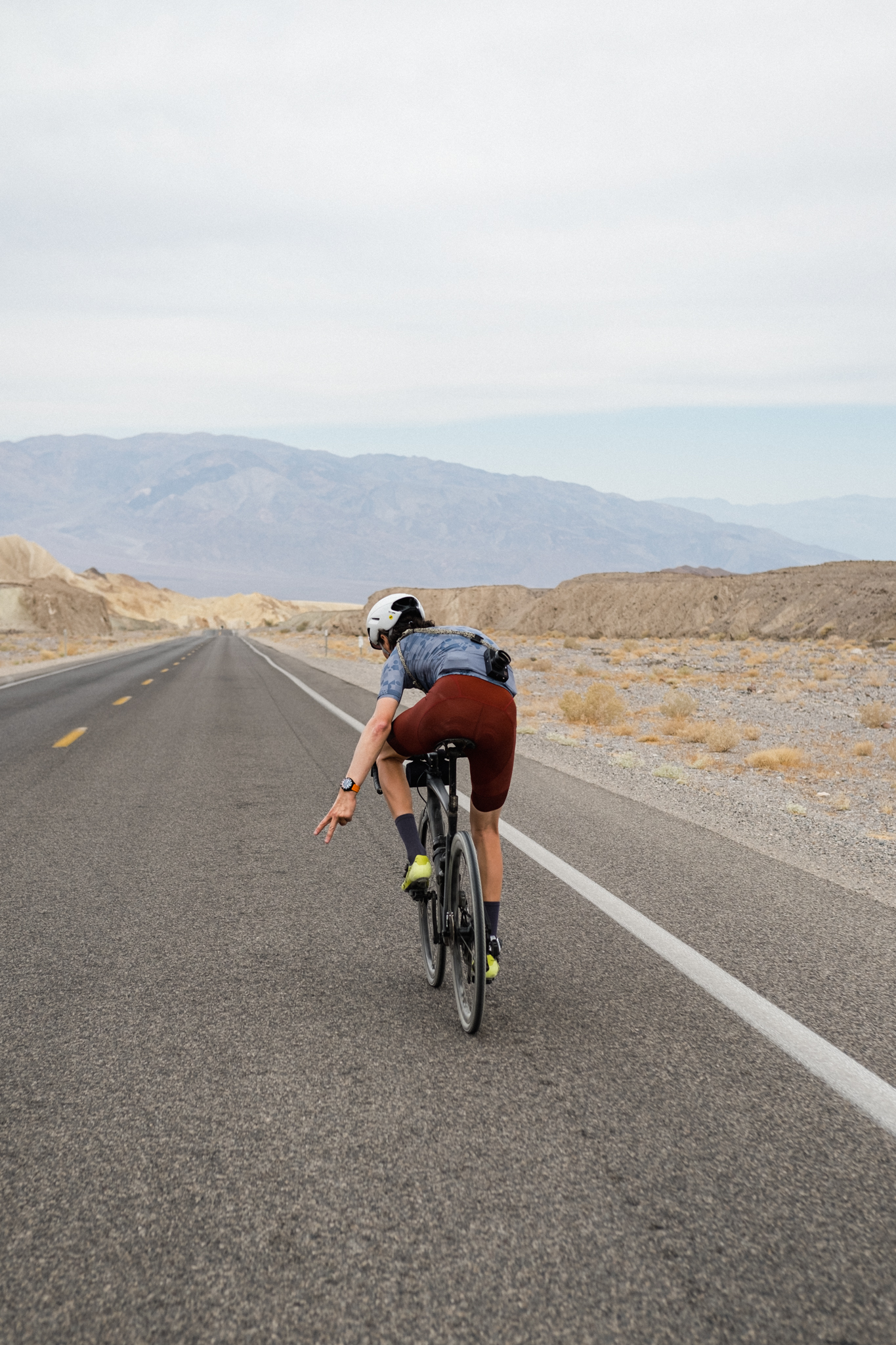