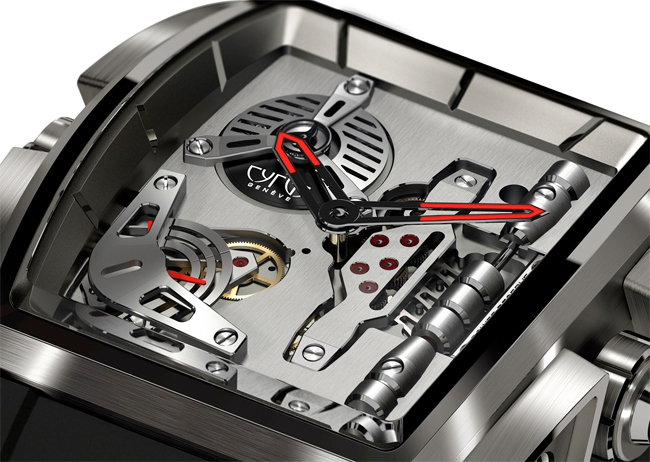 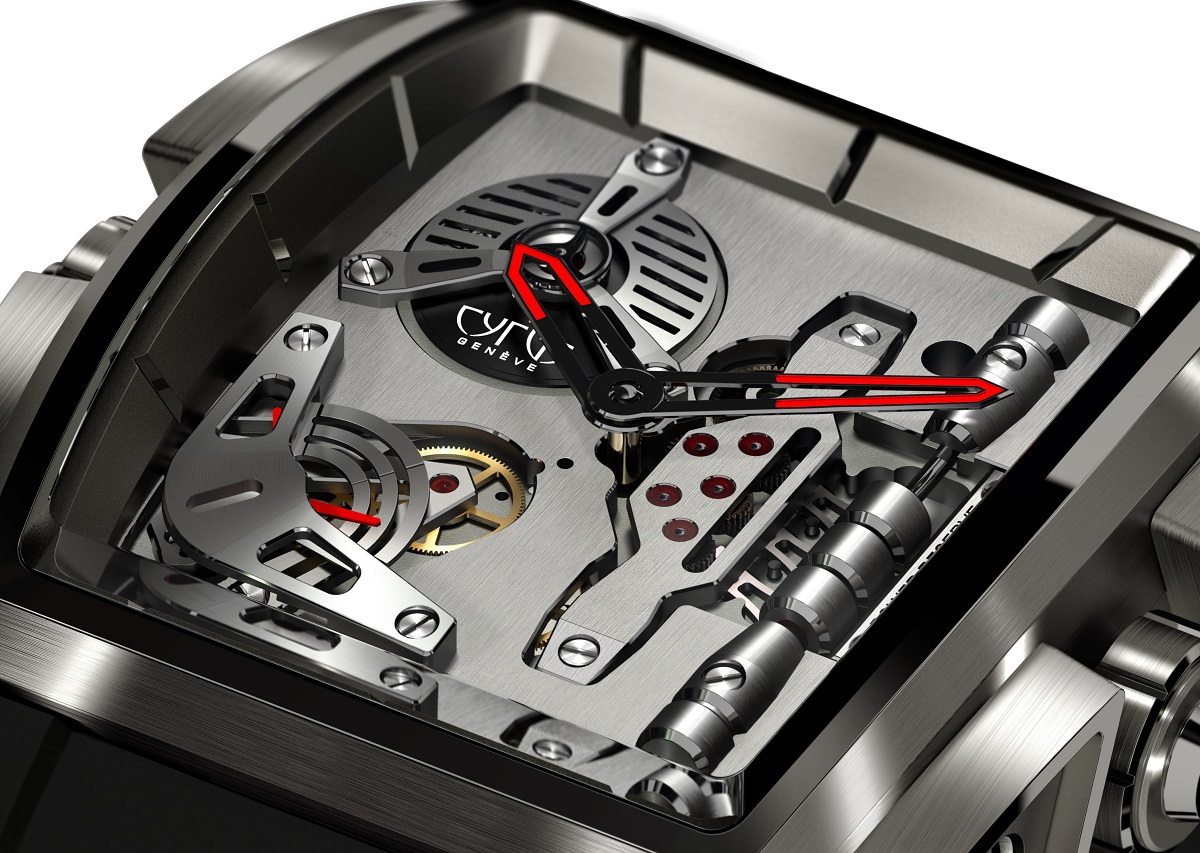 Cyrus, a boutique high-end Swiss watch brand will soon unveil their new Kambys watch at Baselworld 2013 with a movement designed by the very well regarded Mr. Jean-Francois Mojon. Using a curved case typical to the brand, the 50mm wide watch contains an impressively designed movement produced (according to the brand) 100% in-house (rubies and all).

This is also the very first timepiece that has been announced that will be part of the Only Watch 2013 auction in Monaco. According to Cyrus, the very first model in this limited edition Kambys collection will be auctioned off at the event in September.

The most interesting element of the Kambys is the power reserve indicator. The manually wound caliber 7778 movement has a power reserve of seven days. It uses three stacked cylinders on the right-side of the case which slowly fall as the power reserve indicator goes from full to empty. We wouldn’t call it a technical improvement, but it is merely something new and interesting for otherwise bored watch lovers. The caliber 7778 movement doubles as the watch dial, offering the time with subsidiary seconds dial and another feature that Cyrus call their “secret animation.” Using a pusher in the left-side crown, the disc located at about 10 o’clock spins to reveal one of three pictures. One image is the Cyrus brand logo, the next is an image of their brand mascot (a 2,500 year old coin) and last, the number of the piece in the limited edition. According to Cyrus, if any of this bores you, then they are happy to produce custom secret animation images for you.

The Cyrus Kambys watch will be limited to 188 pieces in each of the case materials. Which will be titanium, DLC black coated titanium, as well as 18k red gold. A timepiece like this is in many ways a pure collector’s item for those interested in whimsical complications that express a sense of mechanical art versus technical prowess. Price is 42,800 Swiss Francs. cyrus-watches.ch 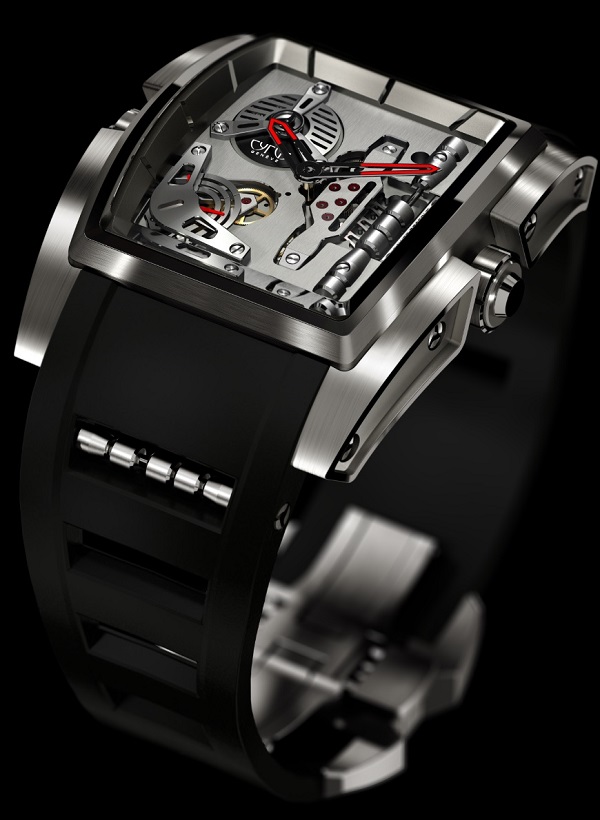 THE KAMBYS COLLECTION Technical details
MOVEMENT: Manufacture movement (CAL 7778)
Developed in collaboration with Jean-François Mojon
Manual winding (using the crown at 3 o’clock)
Double barrel
290 components, 50 rubies
Frequency: 3Hz (21,600 vibrations per hour)
DIAMETER: 50 mm (including the two crowns)
DIAL: No dial
FUNCTIONS: Hours, minutes, seconds, Power reserve, Secret animation
HOURS/MINUTES: In the centre
SECONDS: In the 7–8 o’clock position
Three hands with three arms of different lengths to cover the three sectors of 120°. Each hand (inclined by 8°) passes over to the next every 20 seconds (0 -> 20 sec. / 20 -> 40 sec. / 40 -> 0 sec.).
POWER RESERVE: In the 1–5 o’clock position
Length: 7 days (minimum)
Three barrels slide progressively, one after the other, along a vertical axis.
The two smaller cylinders each represent two days of power reserve. The third barrel represents three days.
SECRET ANIMATION: In the 9–12 o’clock position. With a simple press on the crown at the 9 o’clock
position, the following elements are displayed in the opening:
-­‐ CYRUS logo
-­‐ the number of the piece
-­‐ Cyrus coin (a 2,500-year-old coin, made during the reign of CYRUS THE GREAT). Option to personalize animation
CROWN AT 3 O’CLOCK: 2 positions:
– Winding
– Setting time
Stop second function when stem is pulled out
CROWN AT 9 O’CLOCK: Displays the following on demand: Cyrus logo/serial
number/Cyrus coin (or other personalized element)
BRACELET: Anti-allergic rubber. Adjustable size. Openwork design with moving barrels, echoing the power reserve of the watch itself.
CLASP: Triple folding, titanium
SPECIAL FEATURES:
– LIMITED EDITION (188 pieces/model)
– Titanium/Black DLC titanium and red gold case
-­‐ The number of the in-house calibre bears the distinctive mark of the two original founders (and creators of the KAMBYS collection): 7778, recalling the two years of the cousins’ birth Laurent LECAMP (1977) and Julien LECAMP (1978)
-­‐ Transparent sapphire crystal case showcasing visible movement.
-­‐ Each element of the design has been created internally by CYRUS (back cover, hands…)
-­‐ The first piece in this collection (a personalized piece) will be donated to the ONLY WATCH charity auction.