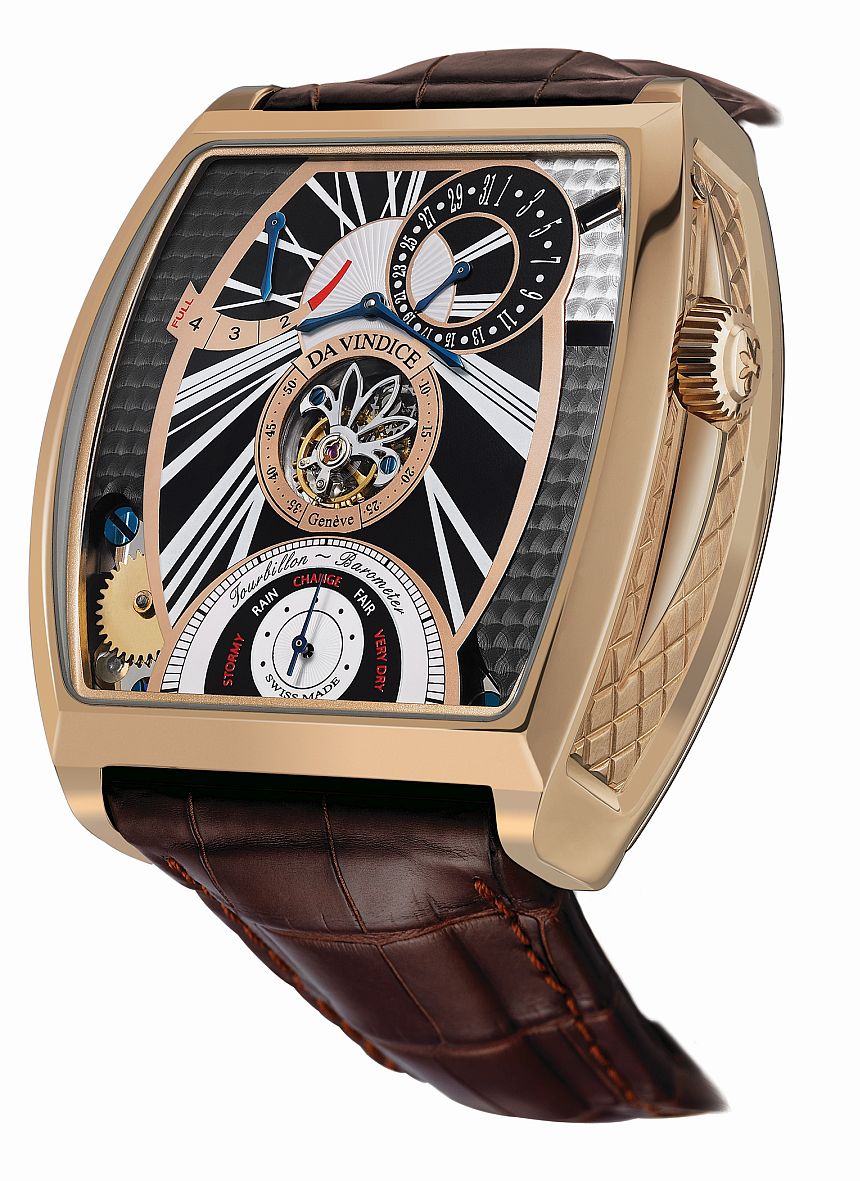 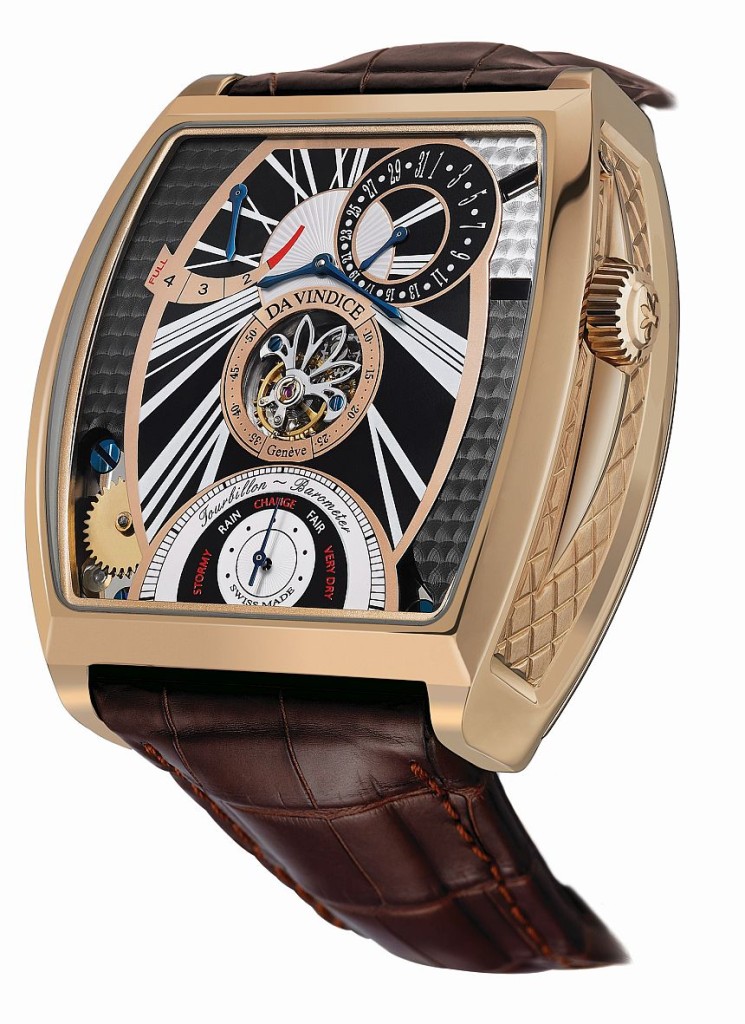 I think there must be something in the water in Switzerland. How else could you explain the multitude of, well, non-traditional complications getting placed into mechanical watches lately? While I hadn’t heard of Da Vindice previously, their latest model certainly made me take notice. They’ve taken something that I’ve only previously seen implemented in fully digital outdoors watches (ie, the Casio ProTrek line) and paired it with a, dare I say, whimsical tourbillon implementation.

The function in question is a barometer and it is part of the 2014 Da Vindice Tourbillon Barometer timepiece. This is very similar in concept to the Breva Genie 01 watch from 2013 (hands-on here). You know, those things that are susceptible (by design) to changes in atmospheric pressure, and give a rudimentary sort of a local forecast? As a weather-telling device, barometers have always been fascinating to me. Implementing one into a wristwatch may not be the most logical thing to do, but it does make more sense than a temperature gauge (which requires you to have the watch off of your wrist for some time to get an accurate reading).

To enable this bit of weatherman wizardry, they’ve put a hermetically sealed capsule (which has a partial vacuum) to sense the changes in pressure; the readout shows up in the gauge at 6 o’clock. Somehow, they managed to build this in while retaining a modicum of water resistance (rated to 30 meters). This surprised me some, as I imagine that some portion of the case must be open to the atmosphere to allow the barometer to work. Then again, I’m no weather guru, so perhaps there’s other ways around this (unfortunately, the information available to me on the watch doesn’t really clarify things). 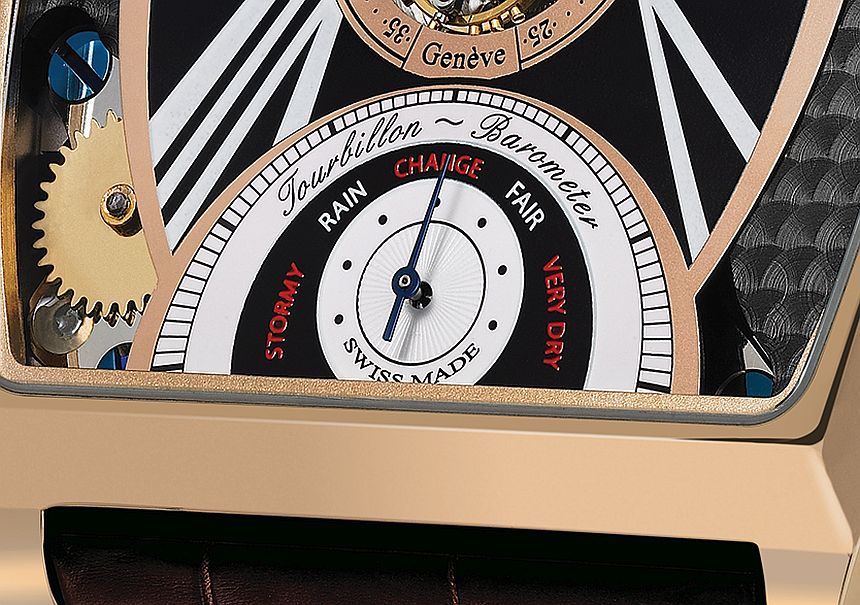 Ok, enough about the barometer– the first of the big circles hitting the dial. Next up, let’s have a look at the whimsical tourbillon. As we all have read (or experienced first-hand), watching a tourbillon at work is quite interesting. Think about the first time you saw a balance wheel at work in a mechanical movement– that was really something else, wasn’t it? Now, jump to the tourbillon, and you’ve got (literally) another dimension of movement churning away, and the enjoyment of watching it only increases. With the tourbillon, as they’re often shown off on the dial, they’re put to work reading out the small-seconds display.

For the Tourbillon Barometer (yup, that’s the name of the piece), Da Vindice has gone ahead and put an open-worked fleur de lys on top to indicate those seconds (as well as carry the brand logo). I like this, as it mixes up the standard arrowhead (which has innumerable variations), and marries practical use, design, and a bit of showmanship, all in one little piece. Next to it, a simple date display would simply disappear, generally. To ensure that doesn’t happen here, we’ve got a pair of offset circles, giving us a sort of oblong look to the readout. Normally I’m not a fan of date displays like these, but here it kind of works. Or, to put it another way, if I had to have a display like this, it might as well be visually intriguing (which this one is). 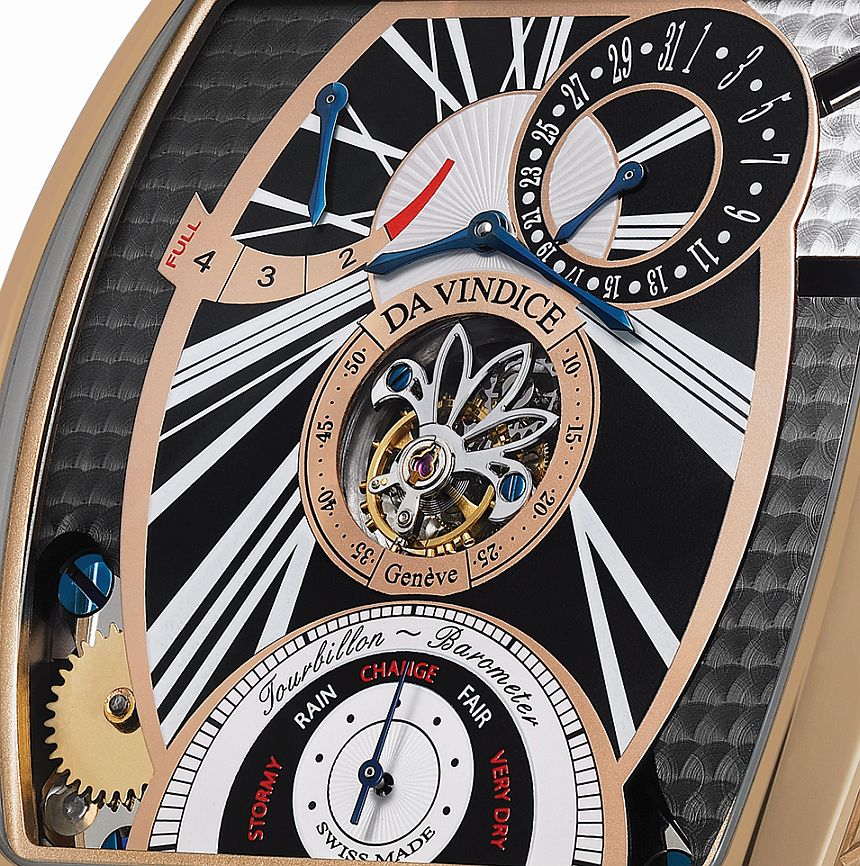 Rounding things out (for readouts) you’ve got a power reserve display smack on top of the 10 o’clock marker. Which reminds me – isn’t this watch supposed to tell time as well? It does, though I’ll admit it took me a bit to figure out how it was doing so. With the dial as busy as it is, the short blued hands (which are pointed to 8:15) disappear a bit on the dial. Which is a bit of a shame, considering the case is pretty massive (54 x 59mm), so one could hope for a slightly larger handset that makes it easier to read the time.

Then again, if you’re picking up a luxury timepiece like this (the price is north of 150,000 CHF), you probably don’t mind spending a little bit of extra time reviewing the dial, watching the tourbillon cage spin round and round, and then finally double-checking if there’s rain on the way, like the forecast said there would be. For all that’s packed into the watch, it’s about as well of a layout and presentation as I think you could hope for (without heading to the digital realm). Then again, this is a pretty massive piece, so it’s definitely going to be making a statement for you, whether or not you want it to. I just hope that the venn diagram of WIS and weather enthusiasts has a generous overlap to it. davindice.com