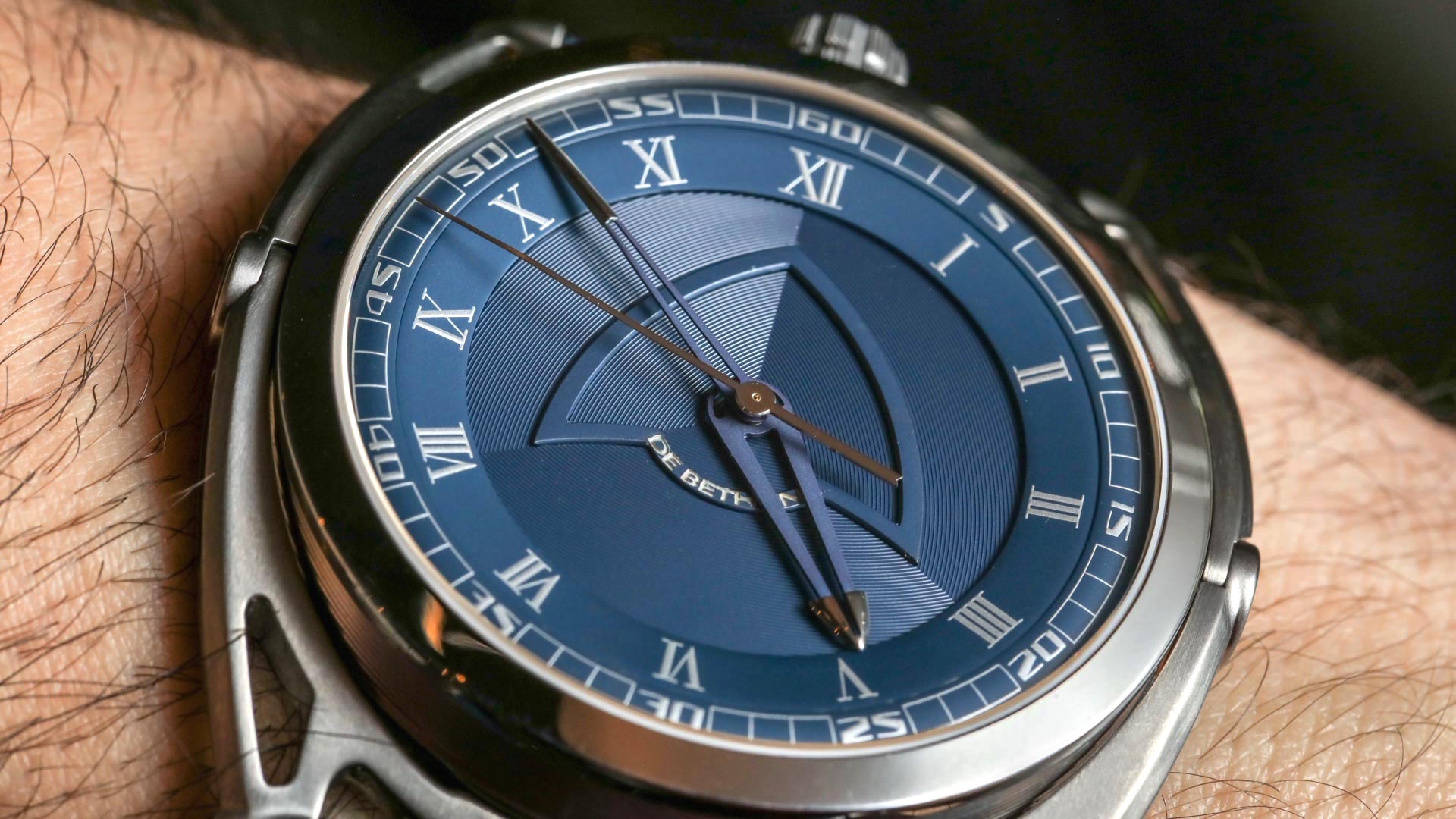 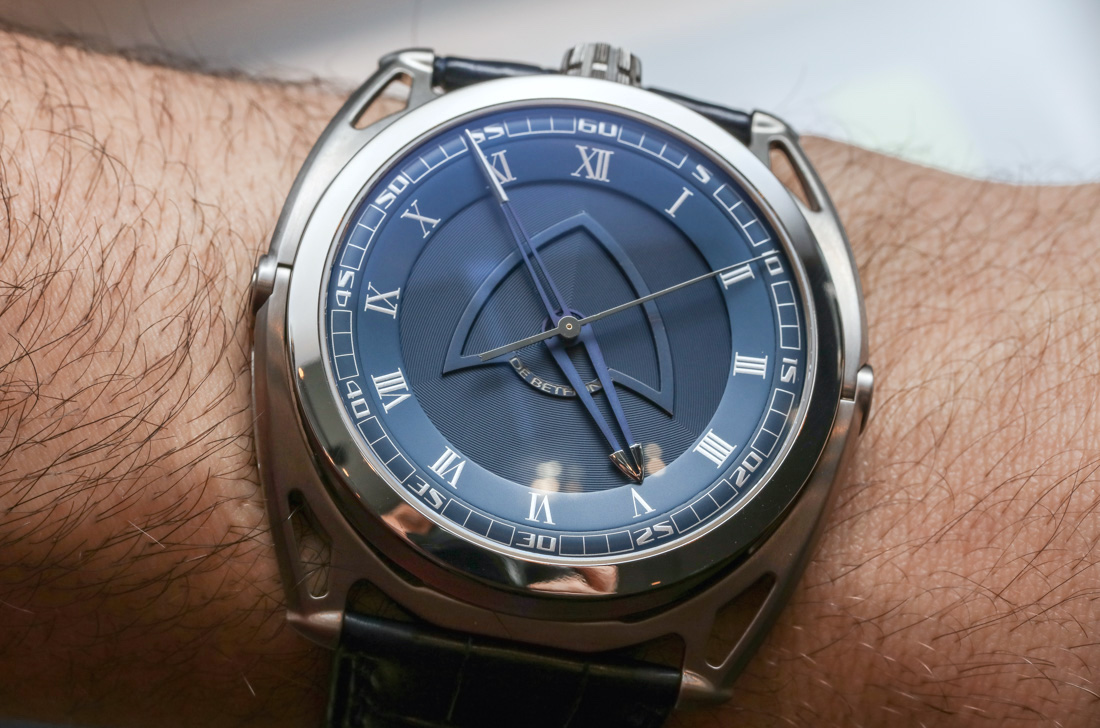 The words “entry level” and “De Bethune” don’t exactly belong in the same zip code, let alone the same sentence, but here we are. But while there’s nary an expression of affordability anywhere in the $38,000 asking price of the contemporary new DB27 Titan Hawk V2 Watch, we’d like to think of it as the Swiss brand’s Huracan or 570S – both pricey supercars in their own right (from Lamborghini and McLaren, respectively), but just where the bidding happens to begin for ownership rights in an increasingly exclusive club. 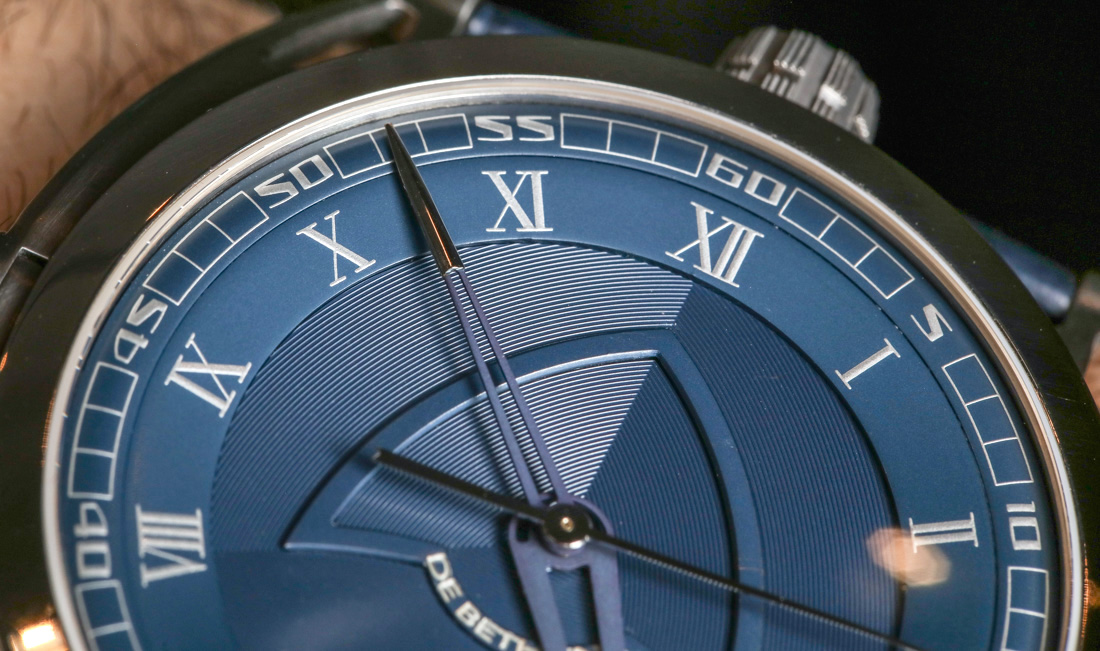 At first glance, it’s probably worth acknowledging that the Titan Hawk lacks the sheer, gobsmacking ‘wow’ factor of the DB25L Milky Way or the visually arresting set-phasers-to-stun effect of the DB28T ‘Kind of Blue.’ And now without a rotating pointer date complication occupying the center of the dial, it’s even less busy than its predecessor – the Titan Hawk from 2015. However, this more visually pared-down alternative is actually quite a welcome treat for those chasing De Bethune’s striking aesthetic (like those gorgeous floating lugs) in a more minimalist and traditional 3-hand form factor that could actually be considered for more regular wear. 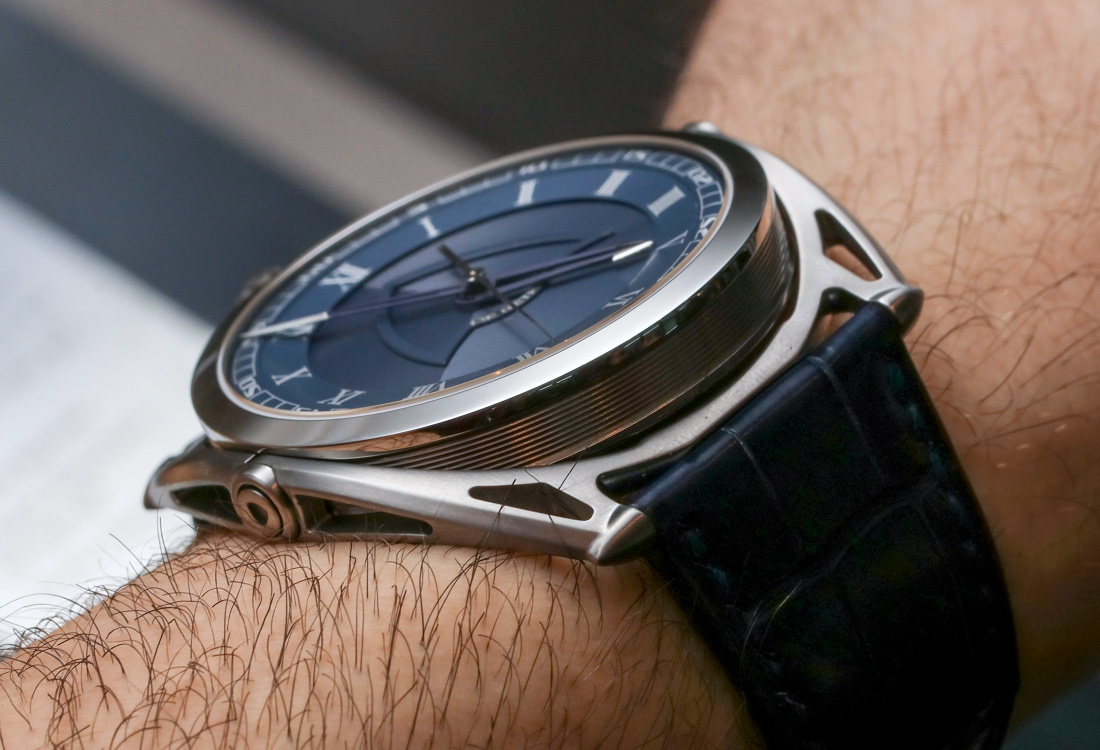 Speaking of those lugs, their design makes for an absolute treat on the wrist when paired with the 43mm wafer-thin (9mm!) titanium case of the Titan Hawk. If you’re new to De Bethune, the crown is positioned at 12:00 to allow the lugs to pivot up and down like a bird’s wings at the 3 and 9:00 hinges. This patented “floating lug” design delivers cloud-like comfort, by enabling the round, pocket watch-shaped case to hover atop the wrist like a spaceship, and the strap itself to closely hug the skin at all points, regardless of the wrist’s shape. 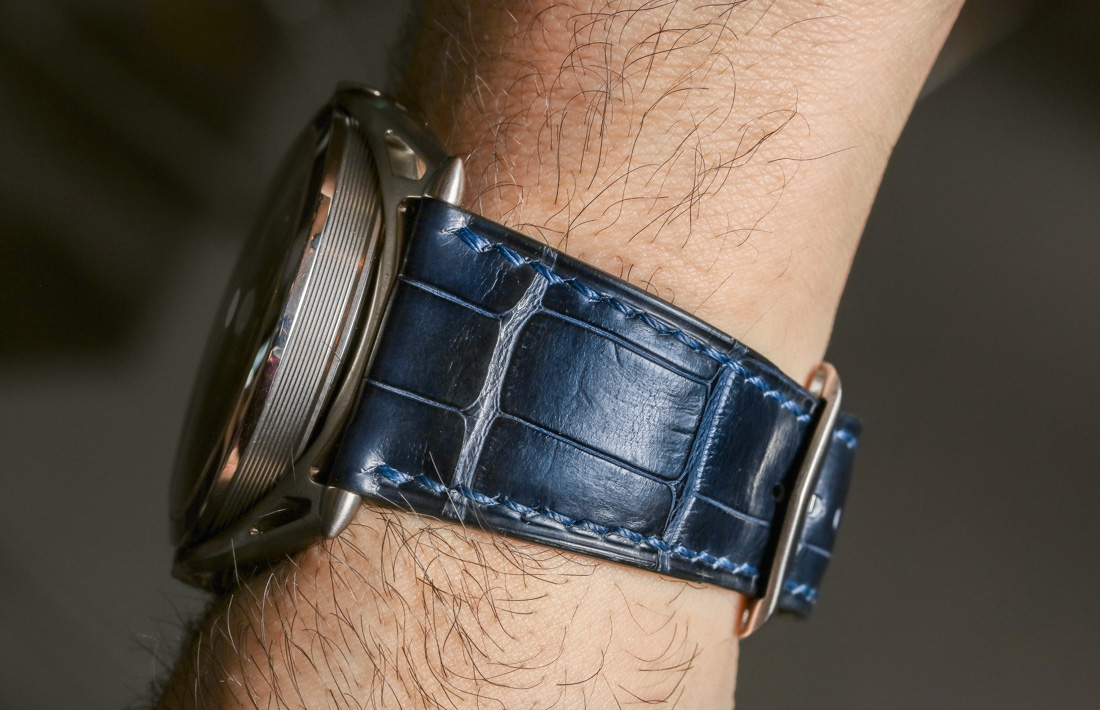 Available in both silver and blue textured dials, we went hands-on with the latter – a unique hue that few brands manage to own better than De Bethune, no matter the reference. Bear in mind this isn’t the dynamic heat-blued titanium mastery found on the ‘Kind of Blue’ halo piece – the multi-layered, multi-textured matte blue dial of the Titan Hawk is much more classically subdued, but that’s a good thing, especially when it comes to everyday wearability. As mentioned, this V2 iteration lacks the pointer date found in the 2015 edition, but the dial still has a raised De Bethune logo motif in the center of the dial – y’know, the one that looks like a communicator badge from Star Trek. It’s a bit odd seeing this logo and the futuristic minute track font sandwiching the über-traditional Roman numeral hour rehaut, but oddly enough – it still sort of works. It is, after all still a classically-grounded mechanical watch, albeit one wrapped in a sleek, retro-futuristic skin. 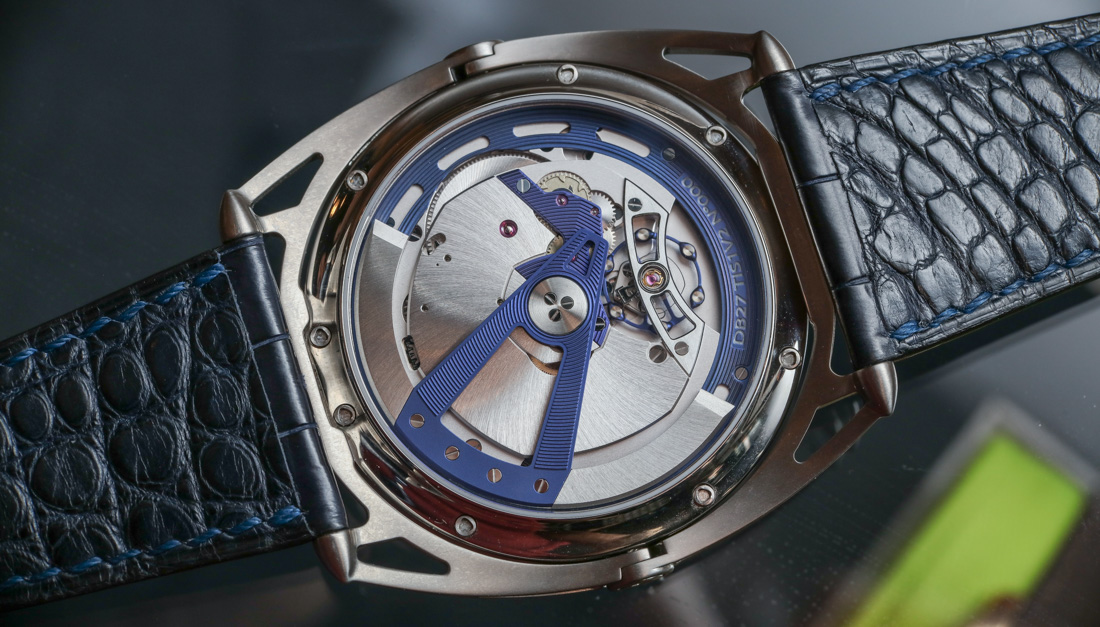 One place where the design language feels a little more Tony Stark than Captain Picard is on its reverse, where the hand-decorated De Bethune S233 automatic caliber delivers a visual feast for the eyes, starting with its heat-blued titanium and tungsten winding rotor that looks a little bit like the ‘A’ atop the Avengers Tower from Winter Soldier. Marvel universe aside, take a closer look into the movement and you’ll notice a unique balance wheel, which exhibits a flat terminal curve design, exclusive to De Bethune. This is a pretty welcome departure from the first Titan Hawk, which only offered a sapphire glass porthole to the balance wheel, and not the entire movement. Despite the wild design achieved through 217 parts, expect the standard chronometric performance here – 28,800 vph (4Hz), and a power reserve of around 60 hours. 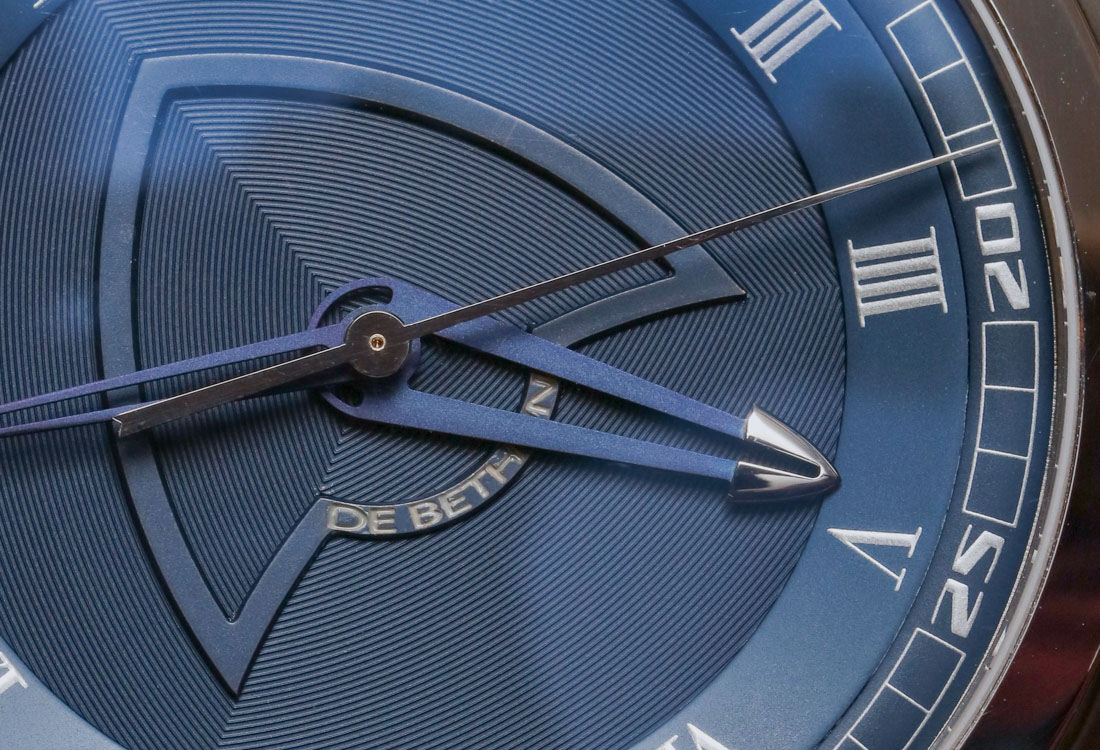 De Bethune has earned itself a reputation for its wildly innovative and futuristic design language, but also borderline unobtainable (and in some cases – not practically wearable either) references. The new Titan Hawk seems to address both those points to longtime fans of the brand, and newcomers alike. And we’re only speculating here – but perhaps the DB27 reflects a slight push to broaden the brand’s access after a recent management shift?

Either way, in keeping with the rest of De Bethune’s impressive catalog, resistance, as they say, is futile. Unless it’s out of your price range, of course. Once again, the DB27 Titan Hawk V2 has an asking price of 37,000 CHF, which, at the time of this writing is around $38,000 USD. Learn more by heading to De Bethune’s site.