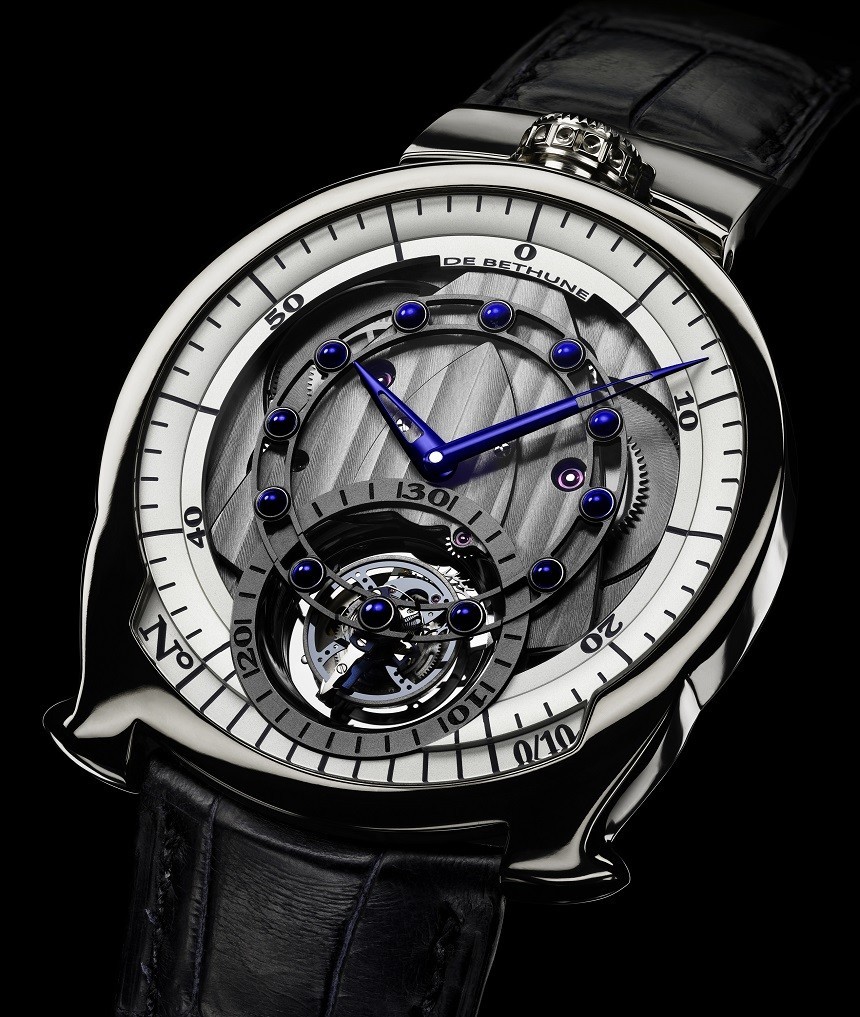 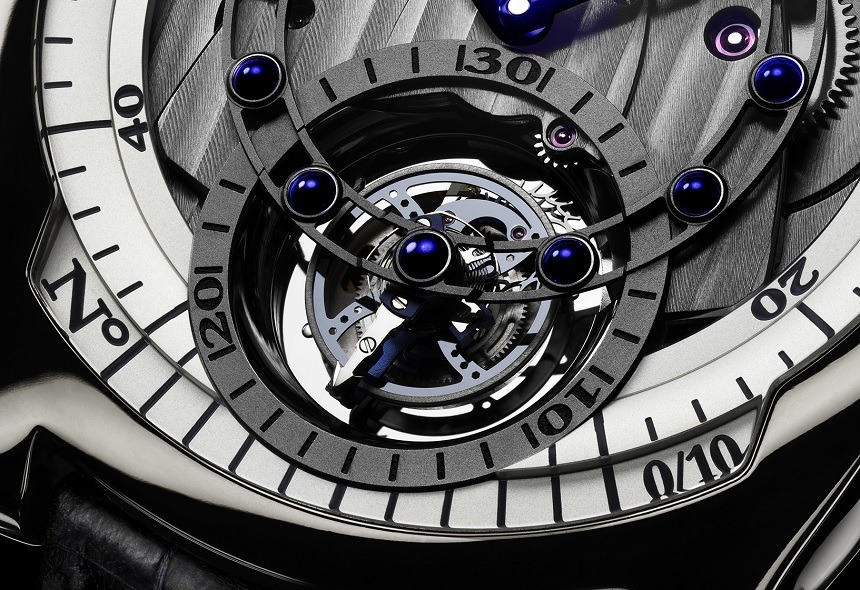 At 6 o’clock on the dial, the high-frequency tourbillon beats away at 36,000 vph. Such an operating speed is made possible by the weight (or lack thereof) of the 63 components that are used in the tourbillon’s construction. The whole complication comes in at a mind-boggling 0.18 grams. The lightest component weighs less than 0.0001 g and the heaviest 0.0276 g. Known for their efforts in research and development, De Bethune have achieved these weight-shaving feats by employing super-light materials such as titanium and silicon. 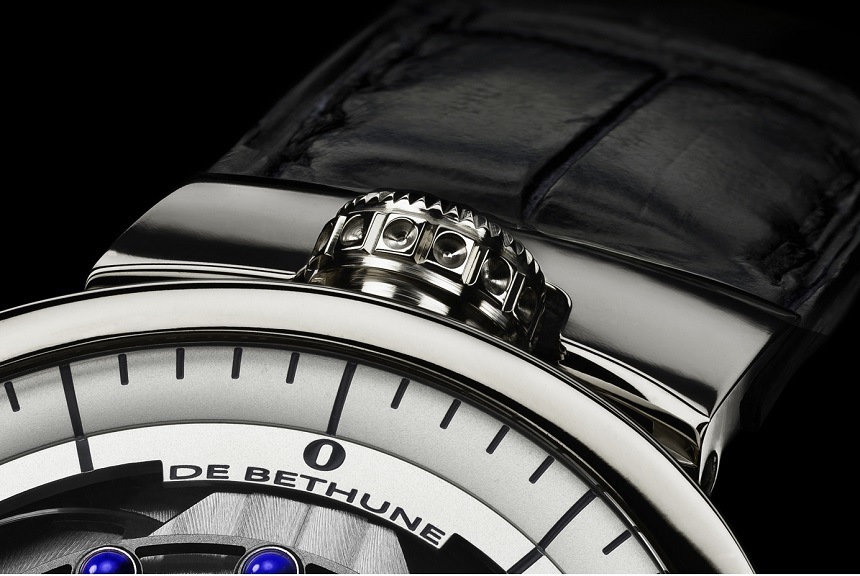 What makes this particular model so fascinating is the way it straddles the then and the now. The case shape of the De Bethune DBS Tourbillon is a nostalgic nod to the genesis of the design that has become a strong brand identifier – the patented “floating lugs” seen on recent models such as the De Bethune DB28 GS (hands-on here). Before De Bethune settled on the system that sees a relatively simple case suspended between a centrally pivoting cradle to ensure a comfortable and balanced fit of a large watch to any wrist, they pioneered this design. The De Bethune DBS is itself a sizable watch, measuring 45mm at its widest point. This is all the more notable when one considers the crown is located at 12 o’clock. To compensate for the width and subsequent length of this watch, De Bethune added a “hinge” to the back of the case, running roughly between 11 and 1 o’clock. The hinge attaches to the strap and artificially reduces the length of the watch on the wrist. This has a dual benefit to the wearer: Firstly, it makes it far more practical for a man or woman of small-to-average proportions to wear a watch of this size; secondly, the position of the hinge causes the case to “sit-up” very slightly, which improves legibility of the dial. 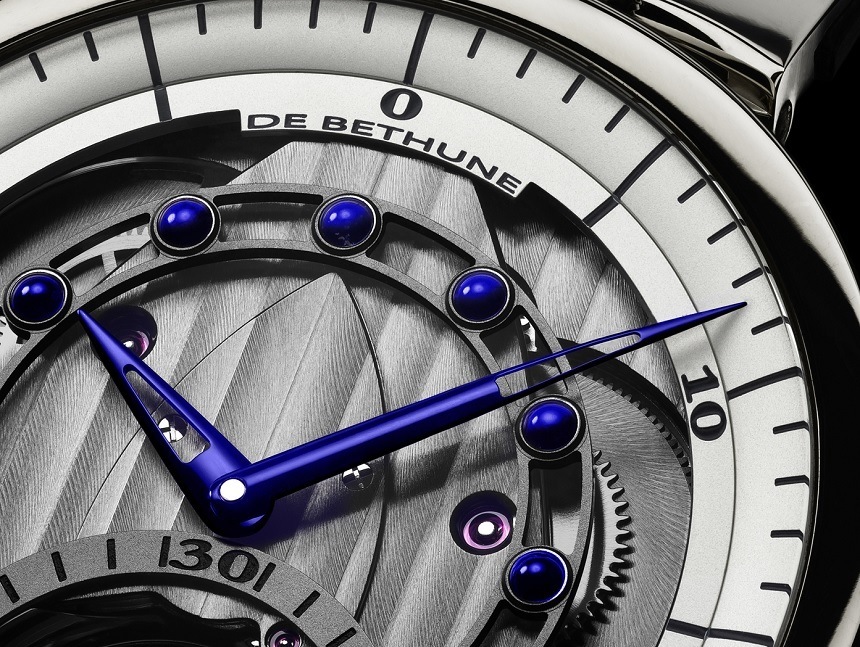 I find it particularly exciting when a brand can be identified by multiple elements. The cases are, of course, very unusual, but the dials too are unmistakably De Bethune. In this instance, the De Bethune DBS Tourbillon utilizes contrasting colors and finishes to great effect. The interplay between the silver-toned minute ring and the exposed ruthenium-coated “Côtes De Bethune,” set off by the flashes of vibrant blue is traditional and avant-garde at the same time.

Although the design is bold and may split opinion, there is plenty I like about this aesthetic. When viewed through a sapphire crystal of 18,000 Vickers hardness and double-coated with anti-reflective treatment, the display comes to life. The hands, although modern in design, are hand-polished and flame blued in the traditional method. The same is true of the hour markers, which take the form of polished orbs of blued steel, apparently floating in an anthracite rack. This watch is more than a science experiment – it is a true fusion of old and new. Radical in style, but sympathetic in method, the De Bethune DBS Tourbillon is a fine addition to a range already bursting with intrigue.

With a power reserve of 5 days, the hand-wound DB2019 calibre features titanium bridges, which again keep the weight down. The case, featuring integrated cone-shaped lugs, is white gold and features a solid white gold case back with linear power reserve indicator. Additionally, the case comes in at 11mm thick. When coupled with the flexible strap attachment, it is easy to imagine the De Bethune DBS Tourbillon sitting very easily on the wrist. The screw-down crown, located at twelve o’clock, is easily operated while the watch is being worn. It also looks like an actual crown, which is a cute and somewhat fitting touch for a watch that some could consider the new boss of its brand. It’s not the most “out there” watch De Bethune have ever created, nor does it feature the most complications, nor the most applied elements. But with a classy, grown-up approach to design, it sets out its stall as a serious and self-assured addition to the range.

If you decide the De Bethune DBS Tourbillon is for you, you’d better move fast! There are only 10 models available, each bearing their unique serial number along the bottom of the dial. We will update with pricing information as it becomes available. Debethune.ch