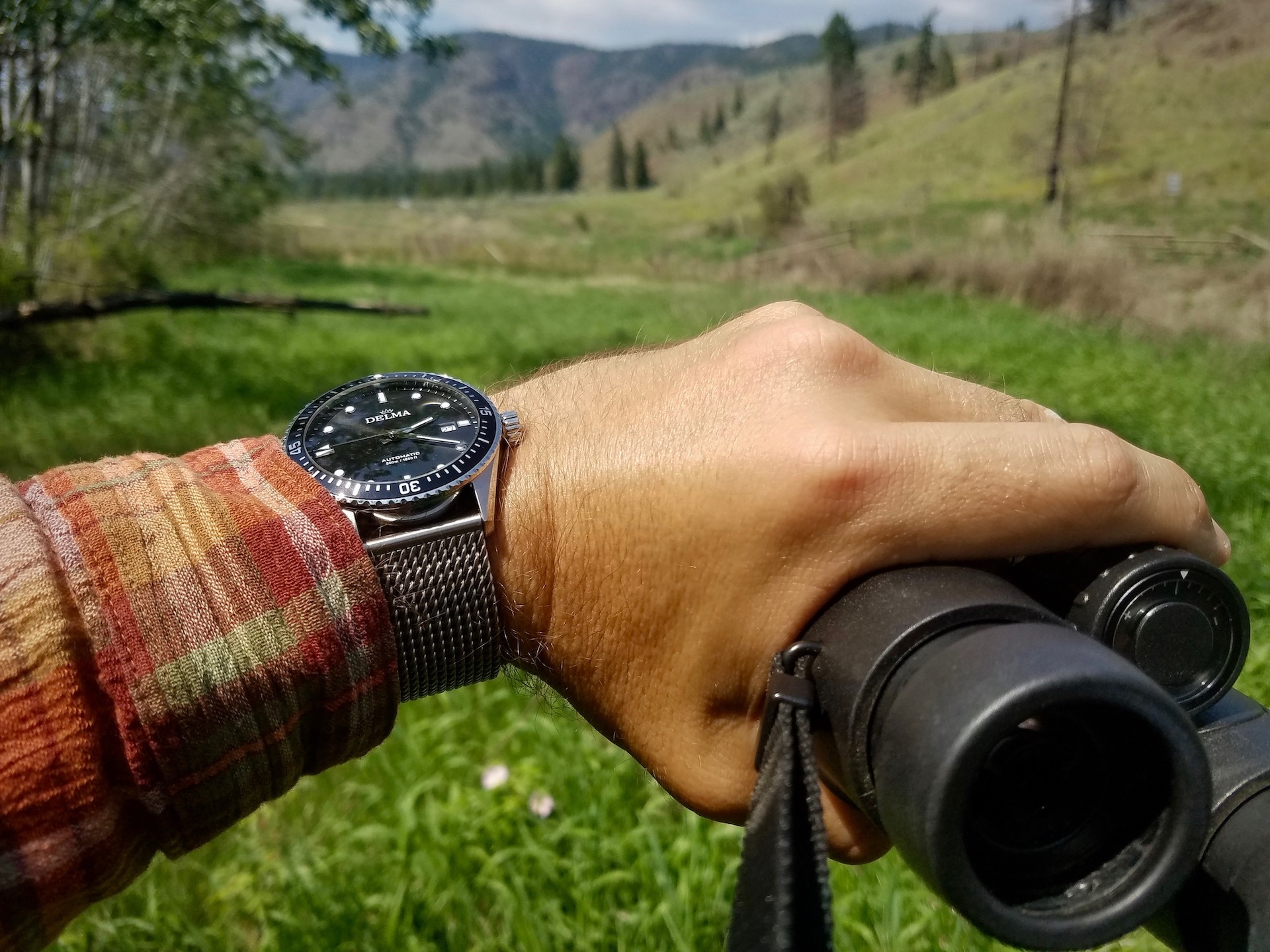 Design inspiration can come from almost anywhere and, in the case of the Delma Cayman Automatic, its horological muse was (surprise, surprise) the vibrant reefs and azure waters off the Cayman Islands, coupled with the classic styling of Delma divers from the 1970s. You’ll have to look to the more colorful models in the lineup to find the link to the sparkling seas of the Caribbean, but the vintage inspiration is immediately apparent, especially when paired with a stainless-steel mesh bracelet.

Established in 1924, Delma has been an independent, family-owned, Swiss company for almost a century. In 1969, Delma produced its first dive watch, the Periscope, and soon began producing professional divers, such as the Shell Star and Quattro in the mid-1970s. Delma quietly weathered the Quartz crisis and has remained in continuous operation ever since. The Delma Cayman will likely appeal to buyers interested in a classically styled diver who want to avoid the big brands in favor of a small independent unlikely to be seen on many other wrists. Before we get started, though, let’s address that big, gray elephant looming in the corner: There are a lot of vintage-styled divers on the market for around $1,000. To say that this is a competitive price point would be quite an understatement. So, the question is, does the Delma Cayman stand out from the crowd? 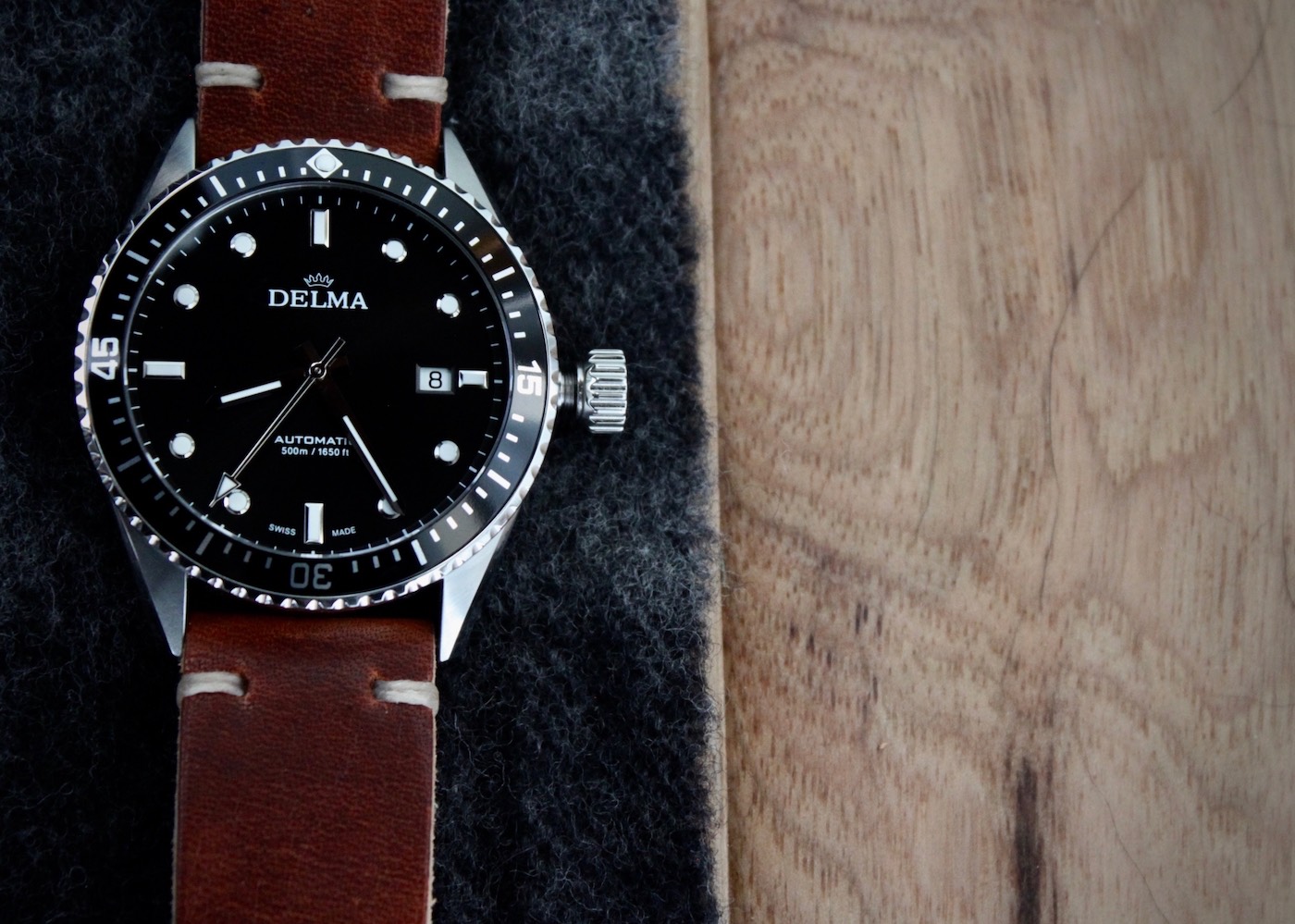 The case of the Delma Cayman measures in at 42mm-wide, 48mm lug-to-lug, and has a 22mm lug-width. Coupled with a 13.3mm height, including the lightly domed sapphire crystal, it’s a case size that should work well for many wrists — my own 6.75” wrist included. The lugs are relatively short and slope nicely, providing a comfortable fit. Overall case execution is well done, with a mix of brushed and polished surfaces and a clean bevel along the top of the lugs. The signed crown is oversized with no crown-guards, a good choice to fit the vintage styling Delma was after with this piece. The crown is easy to grip and, though large, never dug into the back of my hand; no complaints here. 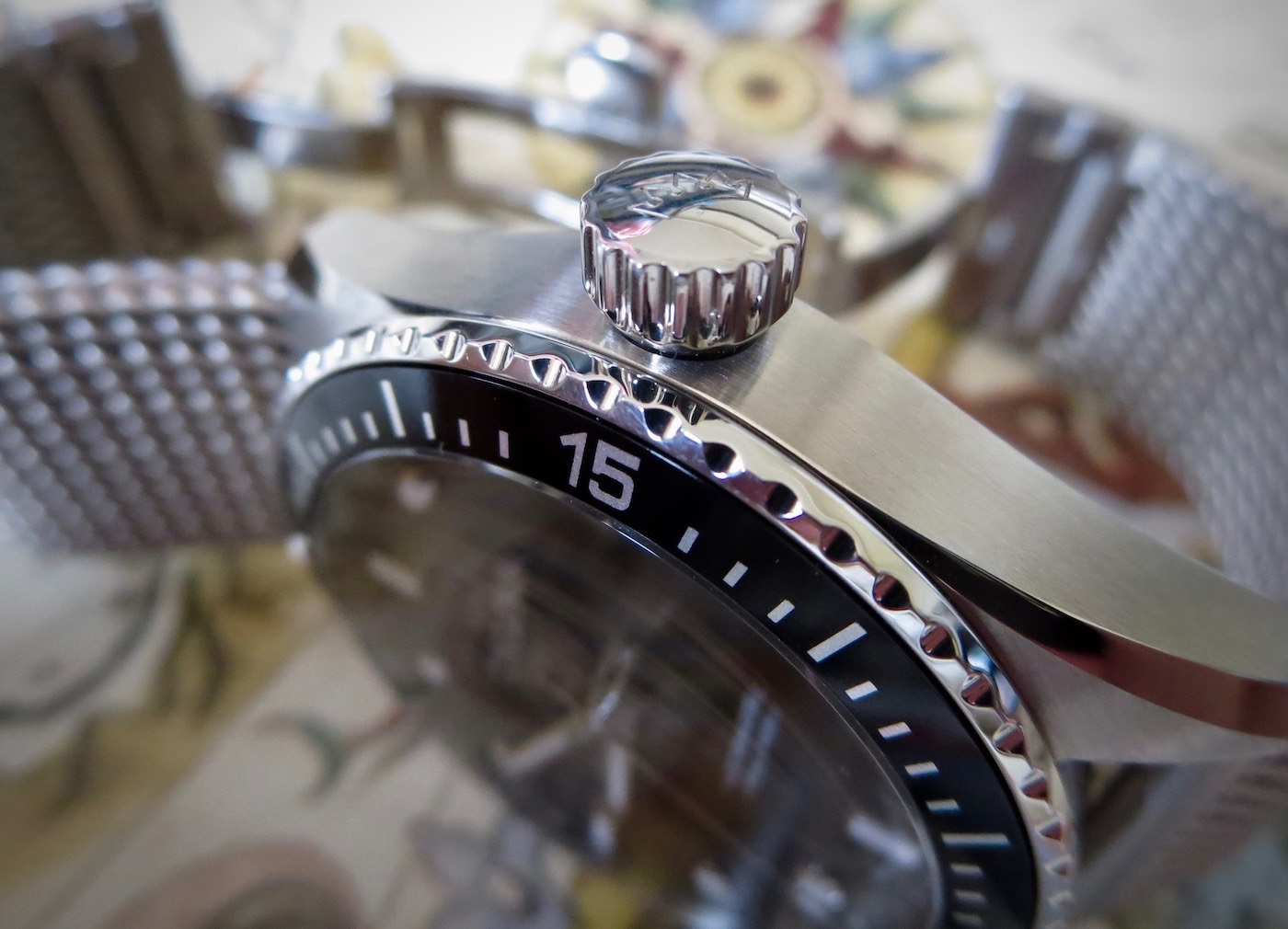 Though the Delma Cayman has a laid-back, vintage vibe, it’s still a serious diver. Sporting 500m of water resistance, even with a sapphire caseback, it’s clear Delma is employing high tolerances and quality case construction. Unfortunately, things begin to go south a bit when we get to the bezel. The unidirectional bezel is 120 clicks with an aluminum insert (sure, ceramic might be nice at this price, but it wouldn’t fit with the 70s styling). Aesthetically, the bezel looks great and I quite like the minimal text, with Arabics only at 15, 30, and 45. The action is also spot-on. The problem is that the bezel is slippery and difficult to grip. From the top, the beveling looks deep and secure, but take a look at the watch from the side and you can see that the bevels are relatively shallow, smooth, and don’t extend far down the sides to of the bezel. Coupled with minimal overhang, the result is a bezel that’s difficult to grip, at best, and especially frustrating when your hands are wet. 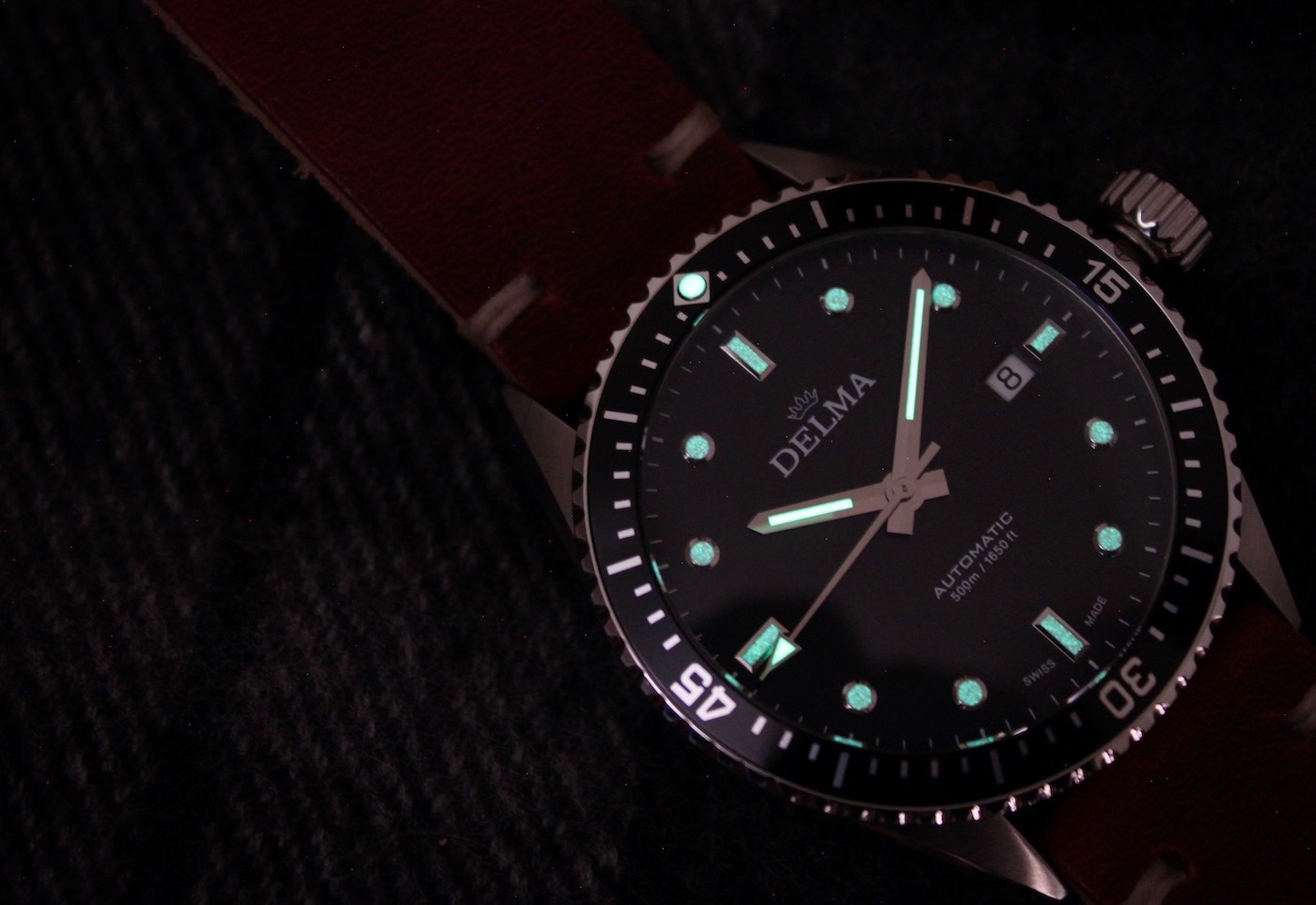 I’m of two minds when it comes to the dial and hands on this watch. On the one hand, the baton hands and applied markers set on a deep, sunburst black dial are handsome, well executed, and highly legible. On the other hand, there’s nothing much new here when it comes to dial design. Delma modeled the Cayman on designs they produced in the 1970s, and the mix of small circular and rectangular markers and classic diver styling certainly evoke the aesthetic of many divers from that era. For better or worse, this is a tried and true design — it’s inoffensive, can easily work as a day-in-day-out watch, and will suit any number of wrists and styles. However, the ubiquity of this dial design also means there are a plethora of options (in almost every price bracket) to choose from. 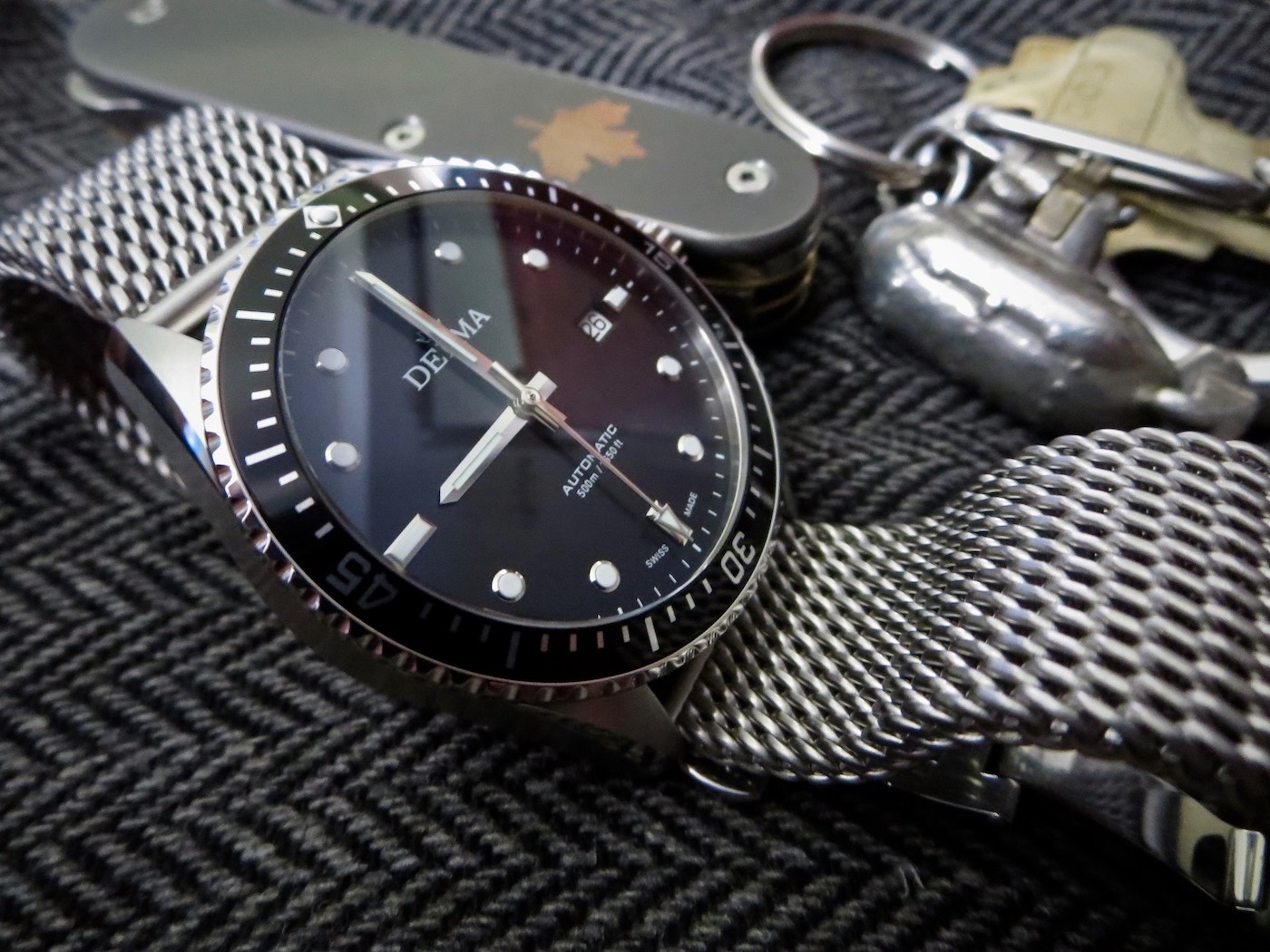 When looking at the dial, the closest comparison I drew was to the Blancpain Fifty Fathoms Bathyscaphe. This is primarily due to the small, circular, applied markers that hug the edge of the dial, creating abundant negative space and ample room for the dark sunburst to shine. Though it does evoke the vintage 1970s vibe that Delma is going for, my eyes want to see larger markers or less negative space — I kept thinking that if the case were scaled down to 40mm, everything might come together… but maybe that’s just me.

Though the hands and markers are luminous, Delma doesn’t specify what lume, specifically, is used and unfortunately, luminosity isn’t a strong point for this piece. The hands glow relatively well, but the marker lume was weak, even when fully charged, which is a bit disappointing considering the 500m water- resistance rating and otherwise highly capable specs. 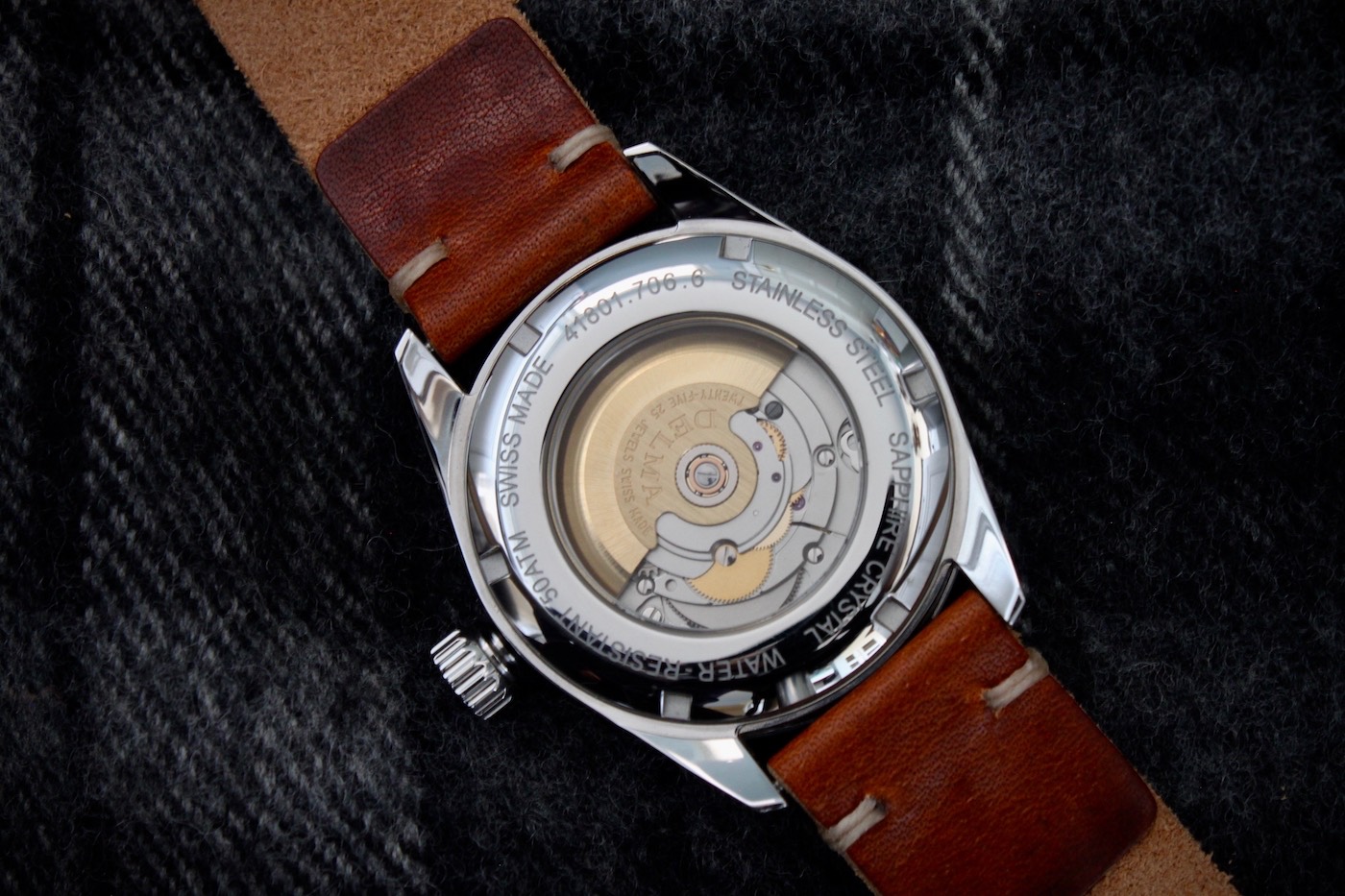 The Delma Cayman comes equipped with a Swiss-made ETA 2824-2 automatic movement, running at 28.8kbph with 25 jewels and a 38-hour power reserve. This is the same movement you’ll find in many other pieces around this price, and it’s a tried and true movement, so I was glad to see it here. Speaking of which, the movement, complete with the custom gold-tone rotor, is visible through the sapphire caseback. Generally speaking, you don’t see many display casebacks in watches with 500m water resistance; it’s a welcome surprise that suits the dressiness of the watch. 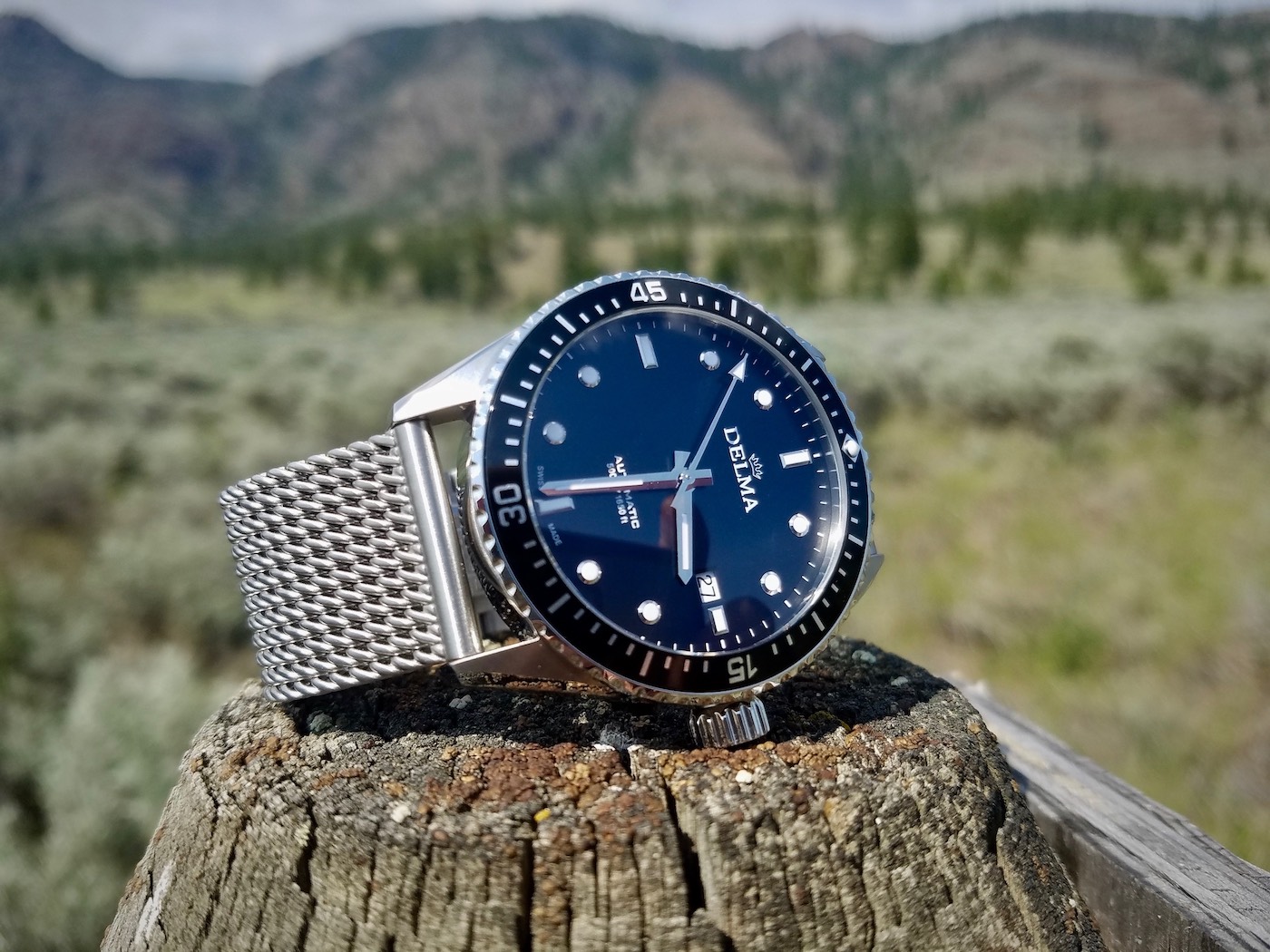 The Delma Cayman comes with the option of a leather strap or a Milanese steel mesh bracelet. I can see the mesh bracelet being a divisive choice, but it does help bring out its vintage aesthetic.  Those adamant about solid end links and more traditional bracelets can look to other modern divers in Delma’s line, including the Periscope and Commodore. Regardless, the Milanese mesh with butterfly clasp was comfortable, even under a scorching summer sun. The downside to most bracelets with butterfly clasps, including this one, is the lack of micro-adjustment capability. Luckily, I found a sweet spot, and the sizing links at the clasp are relatively narrow, but the lack of adjustability is worth noting.

The mesh bracelet does the job, but it’s hard to beat a black-dialed dive watch with 22mm lugs for strap versatility. Like any good watch nerd, I went straight to my box of straps and tried out some options. As expected, it looked great on NATO straps, an Erika’s Originals Marine Nationale strap, and a minimal stitch leather strap. It’s a black-dial diver, so it’ll look great on almost anything. The minimal-leather strap (from Threaded Leather Co.) was my favorite pairing, and I could see wearing it on leather a majority of the time. 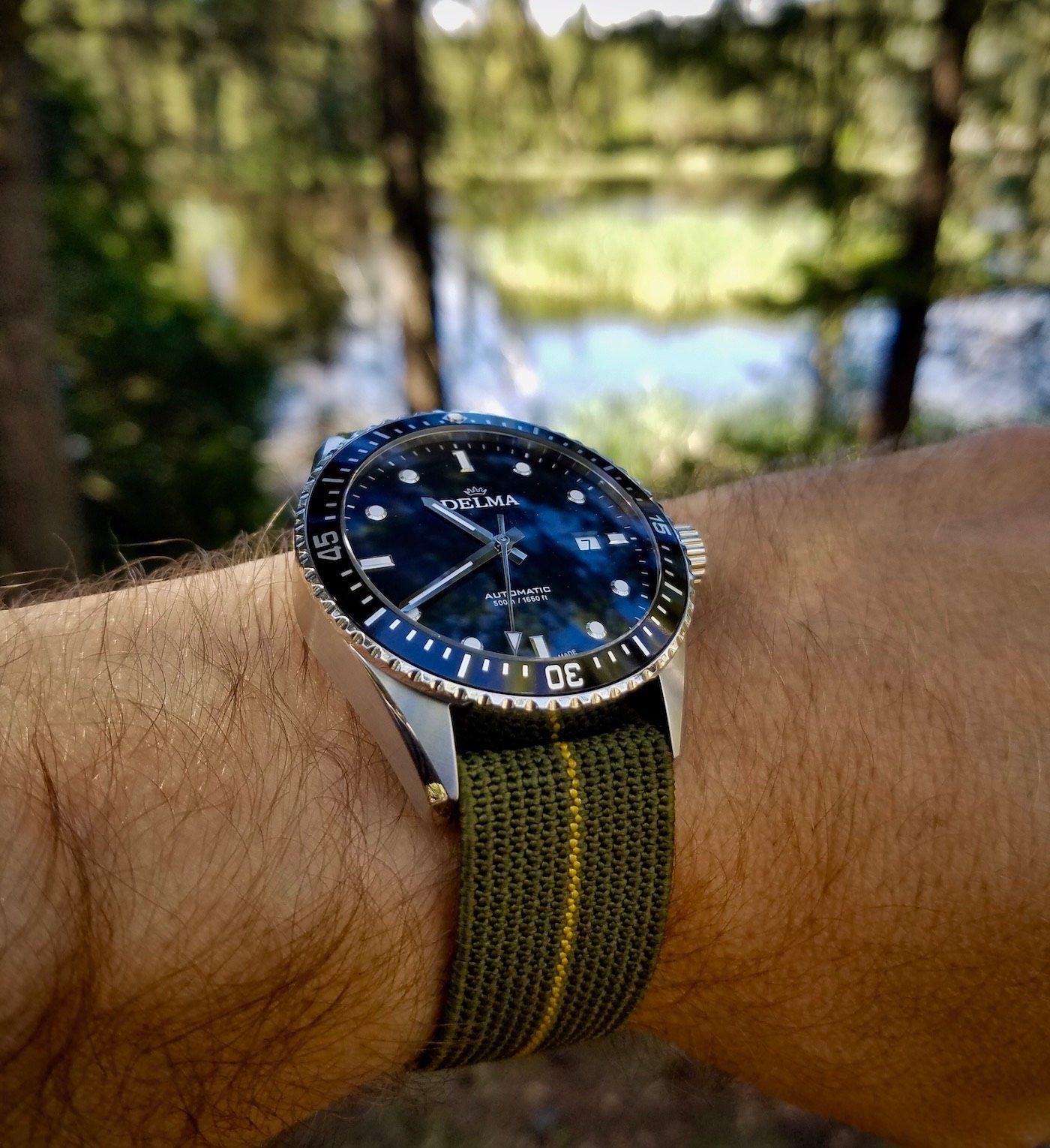 As I mentioned in the intro, there are many options and alternatives out there, but the Oris Divers 65 42mm was the first watch that came to mind. Both watches aim for a vintage aesthetic, though the Oris goes with fauxtina lume and a box sapphire crystal. Both evoke a late-60s, early- 70s vibe, but using very different approaches. Especially on leather, the Delma will dress up better, but the Oris is, perhaps, a more versatile choice (albeit with a heftier price tag of 2,150 CHF). 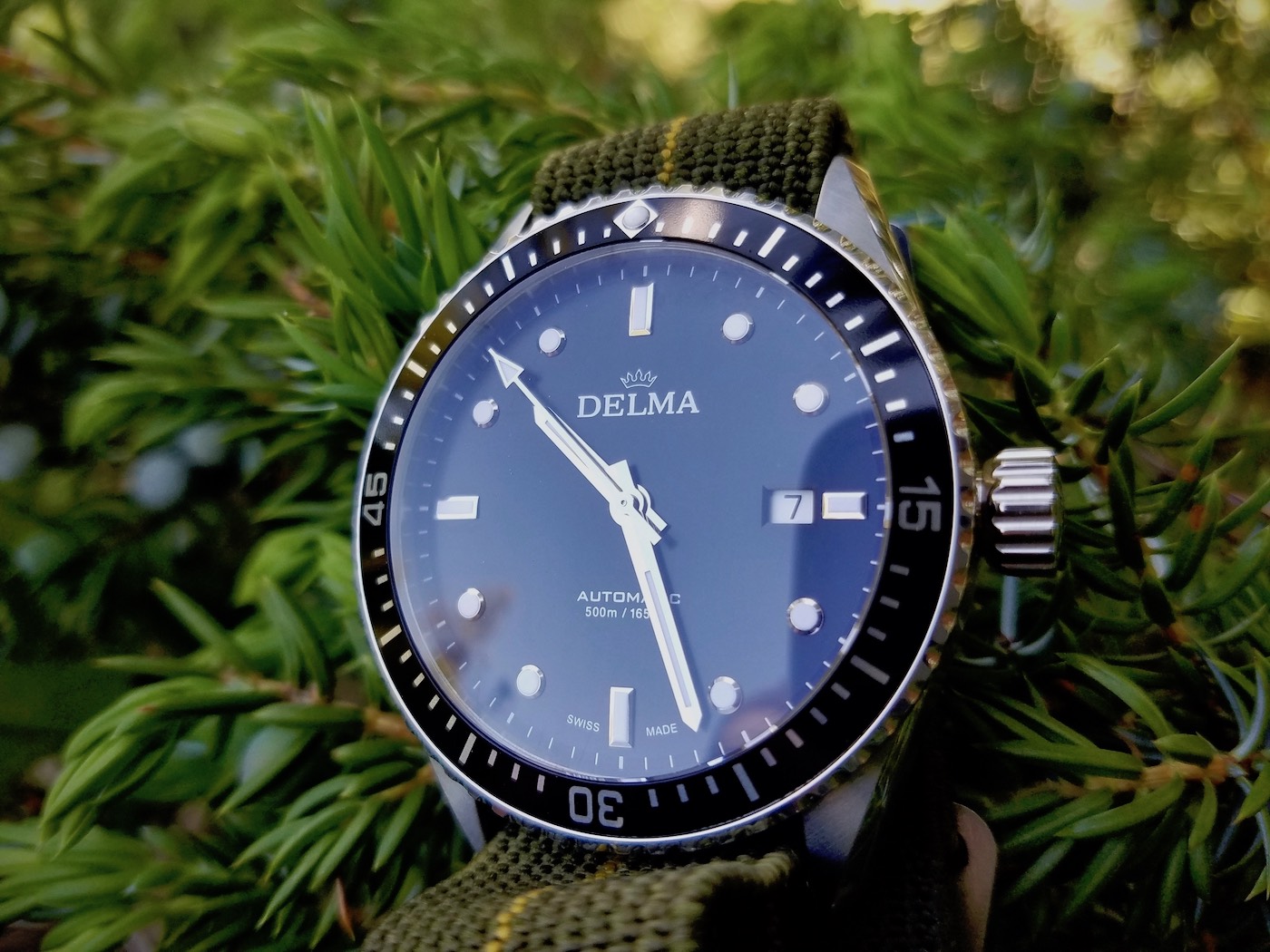 Another more similarly priced option at $1,135 is the Christopher Ward C65 Trident: same movement, similar size (41mm), applied markers, and vintage styling (but like Oris, Christopher Ward opts for vintage lume and a box sapphire crystal). A bit of a wild-card option could also be the Squale 1521; at $899, it comes in at a slightly lower price point, has the same 500m water resistance, but is a funkier piece that wouldn’t have looked out of place on Steve Zissou’s wrist (though you really can’t beat the Vostok Amphibia for that role). 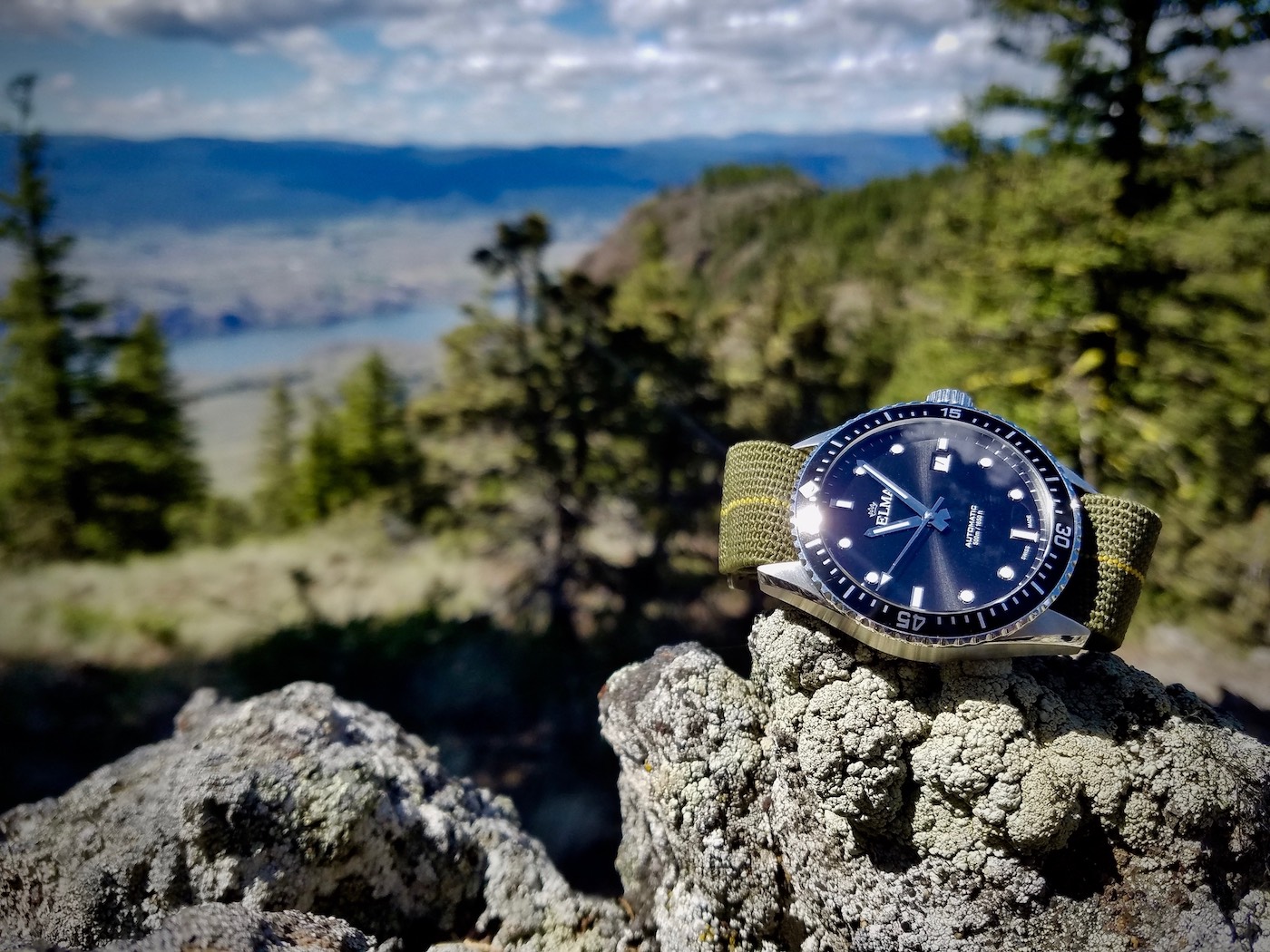 The ~$1,000 vintage diver market is a crowded space. Ultimately, it comes down to what you’re looking for in a watch. If you’re in the market for a classic watch that errs on the dressy side, then this 70s-styled diver from Swiss independent Delma is priced at 1,150 CHF. You can learn more at delma.ch.

Necessary Data.
>Brand: Delma
>Model: Cayman Automatic
>Price: 1,150 CHF
>Size: 42 mm-wide, 13.3 mm-thick, 22mm lugs, and ~48mm lug-to-lug distance.
>When reviewer would personally wear it: When looking for a dressy diver with a vintage vibe.
>Friend we’d recommend it to first: Someone looking for a capable, classically styled diver from a smaller brand that appreciates a watch that can dress up.
>Best characteristic of watch: All-around versatility and spot-on vintage style.
>Worst characteristic of watch: Bezel grip and weak lume.