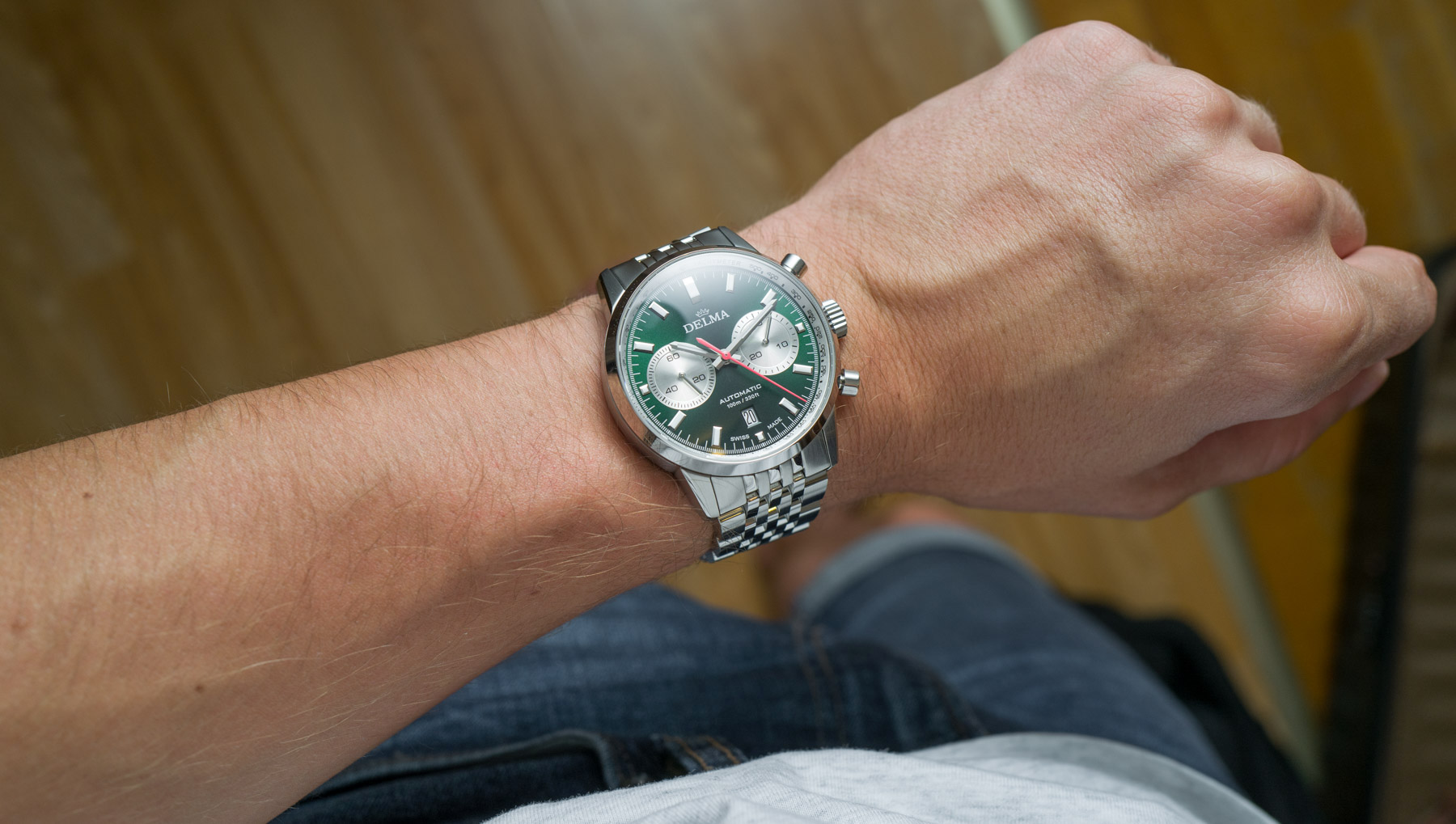 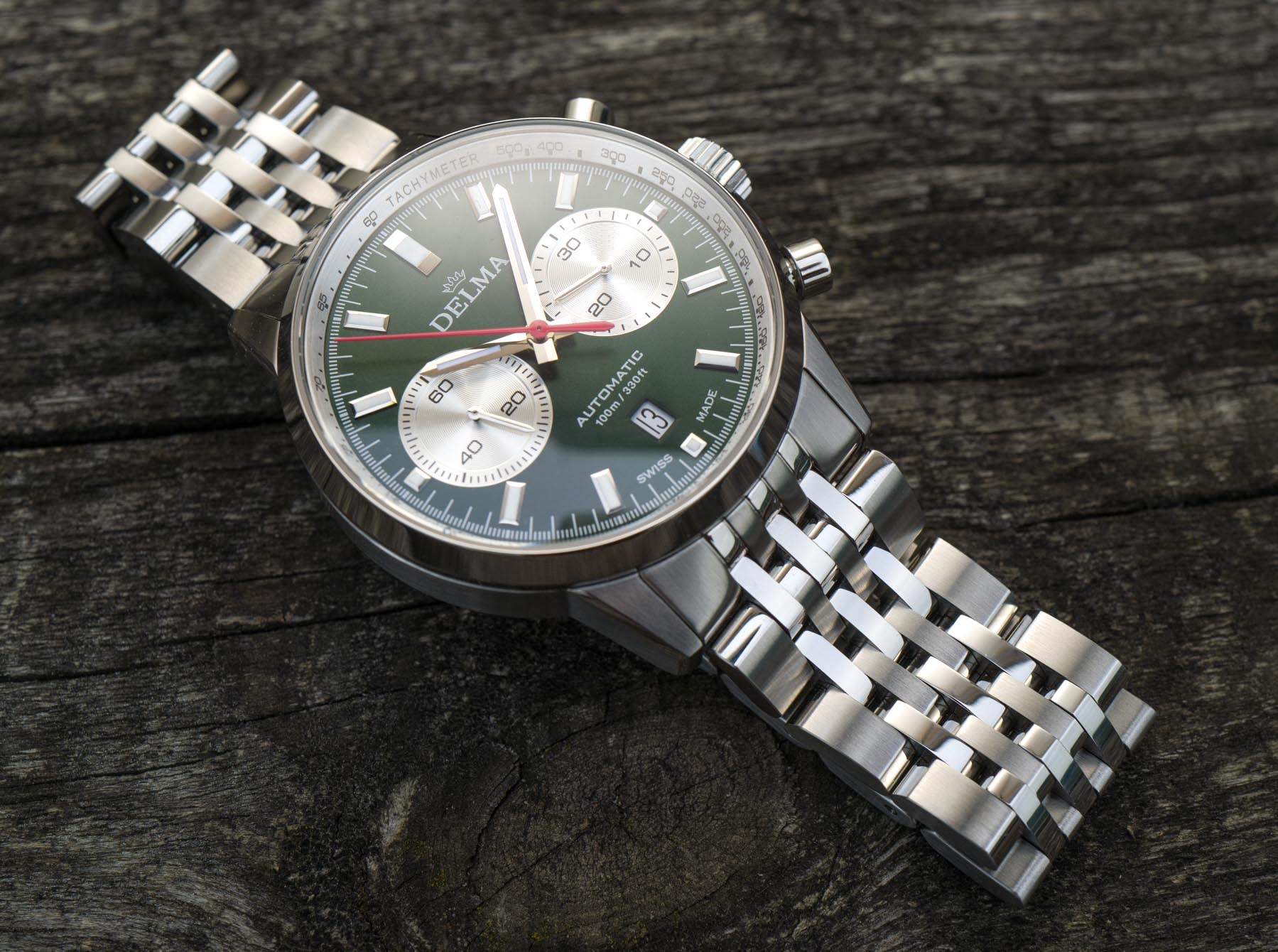 The Delma Continental Automatic Chronograph ranks among the most expensive watches the near-100-year-old company currently offers. At €2,800, it wants to measure up in what is a highly saturated market full of brands, small and large, cutting each others’ throats in the race for us watch buyers. Let’s see how this measure-up game goes for the Continental. 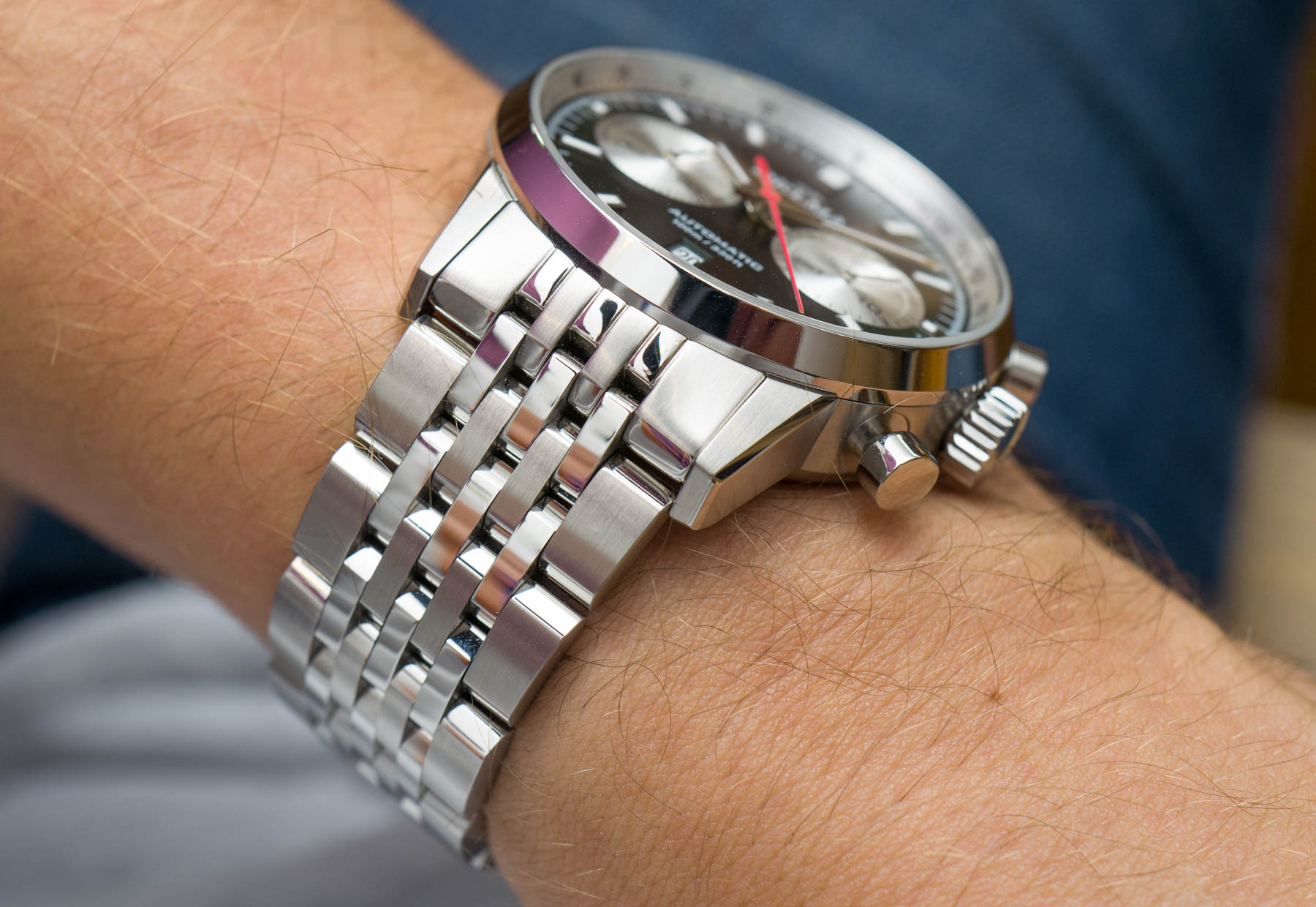 In line with Delma traditions, the Delma Continental Automatic Chronograph is one rather heavy and hefty watch. Not quite as overwhelming as its Blue Shark III 4,000-meter diver we reviewed earlier, but if it’s weight you want from an expensive watch, consider that box ticked. Water-resistant to 10 bar (100 meters) and clocking in at 42mm-wide, this is among the larger-wearing 42mm watches out there. Whether that’s for the better or worse is up to one’s personal preferences. Its 15.2mm thickness is a telltale sign of the beefy ETA 7750 (in fact, in this case, its Sellita equivalent SW510) ticking inside. That’s a caliber that has proven its robust design in innumerable watches over the past four decades, and word has it Sellita has improved in its quality control, too. This example ran a few seconds slow with plenty of daily time on the wrist. 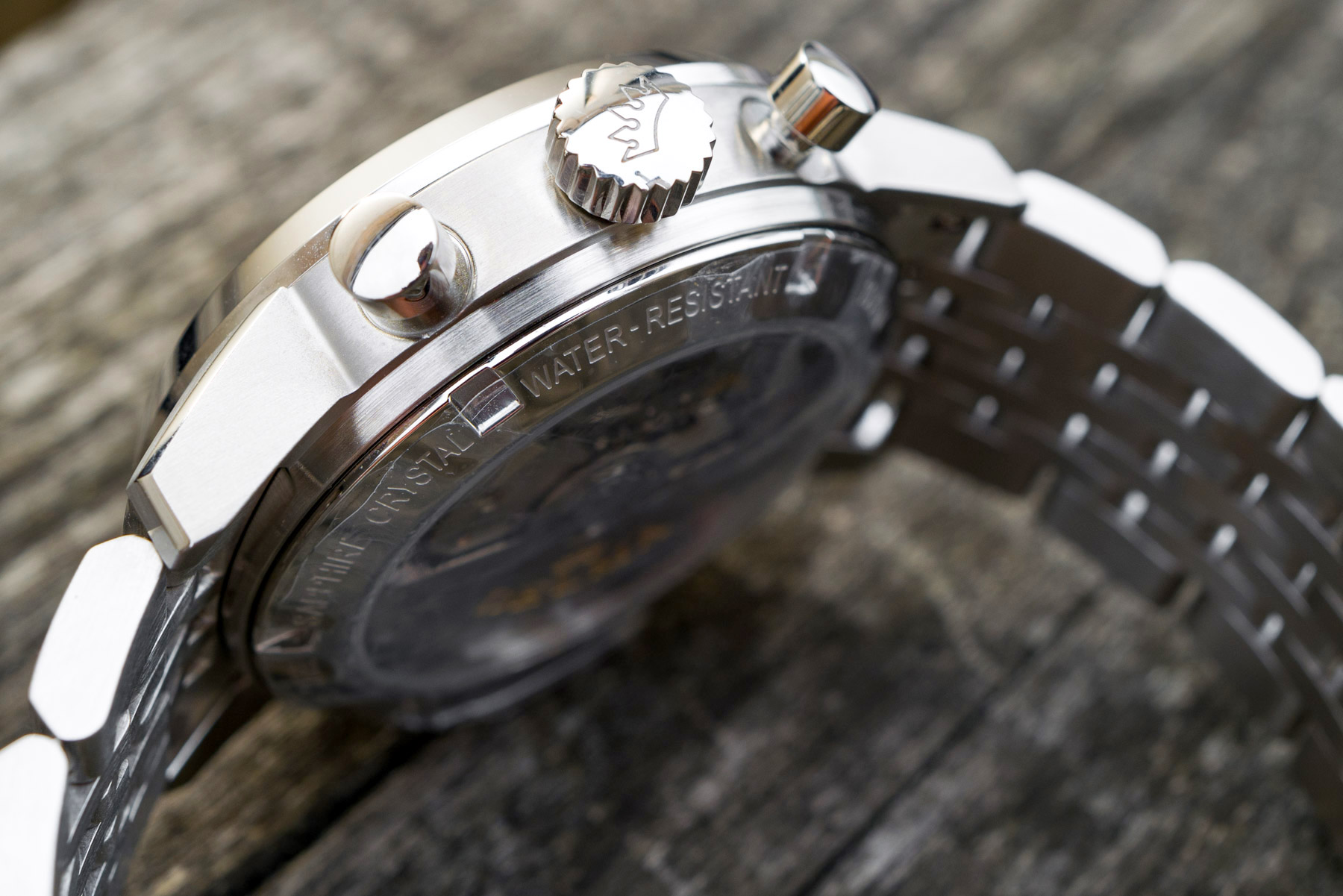 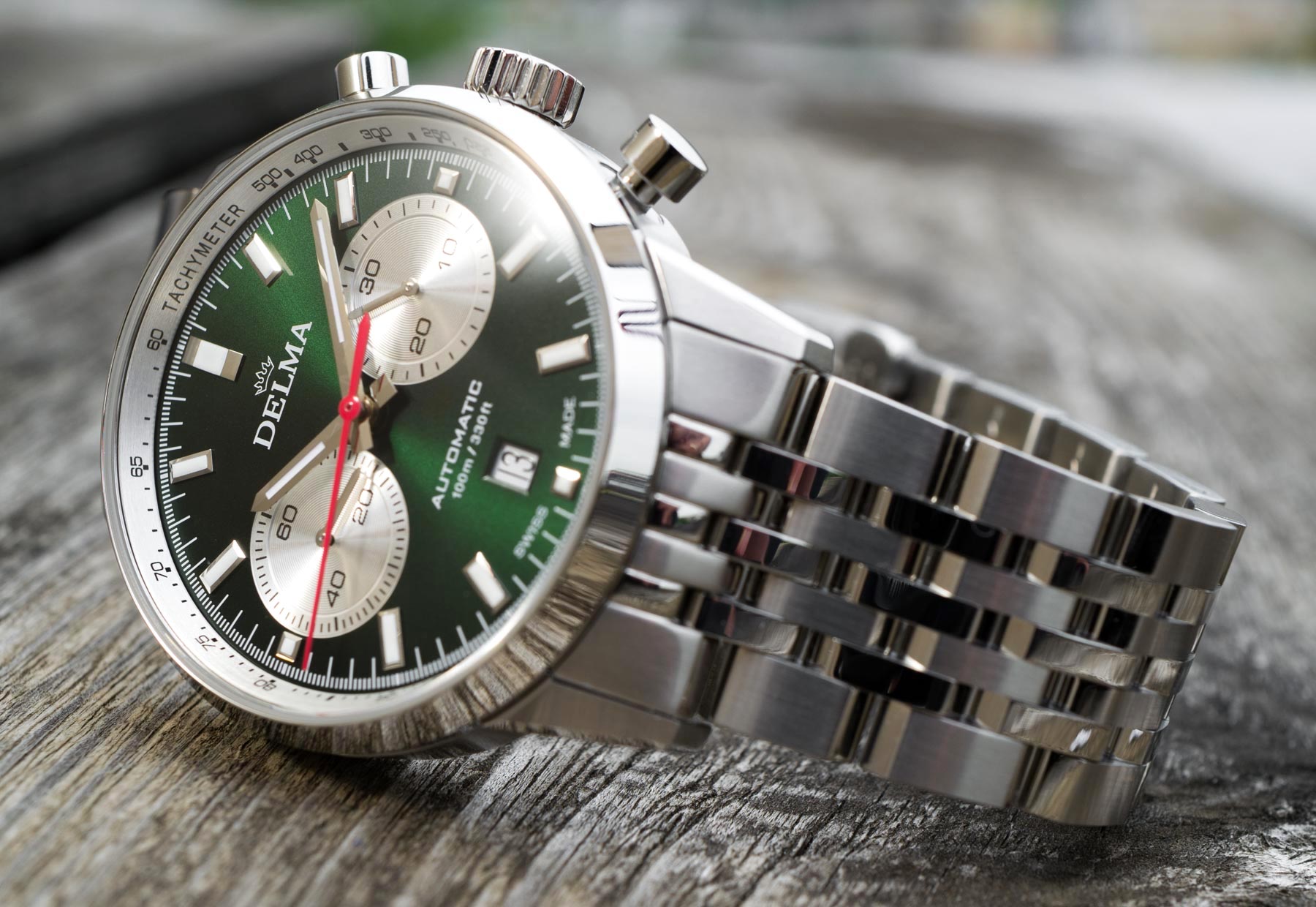 In essence, the Delma Continental is a watch that feels like you could throw it at your adversary and expect it to inflict considerable damage. Closing the initial sensations segment with out-of-the-box impressions on execution, the Delma Continental is a watch that wants to impress with lots and lots of shiny surfaces intertwined with some brushed areas on the case and bracelet. This, combined with the heft of the piece, should suffice to convince even the most novice of watch lovers that this is neither a cheap nor a cheaply made watch. That’s good to know because you probably won’t be wearing it with the price tag still attached. Wear it, however, and even luxury-agnostic people at the other end of the table will recognize the fact that you’ve paid a pretty penny for your watch. Why are we telling you this? Well, we are because the computer-rendered images Delma launched the Continental with didn’t exactly do this aspect of the collection justice. 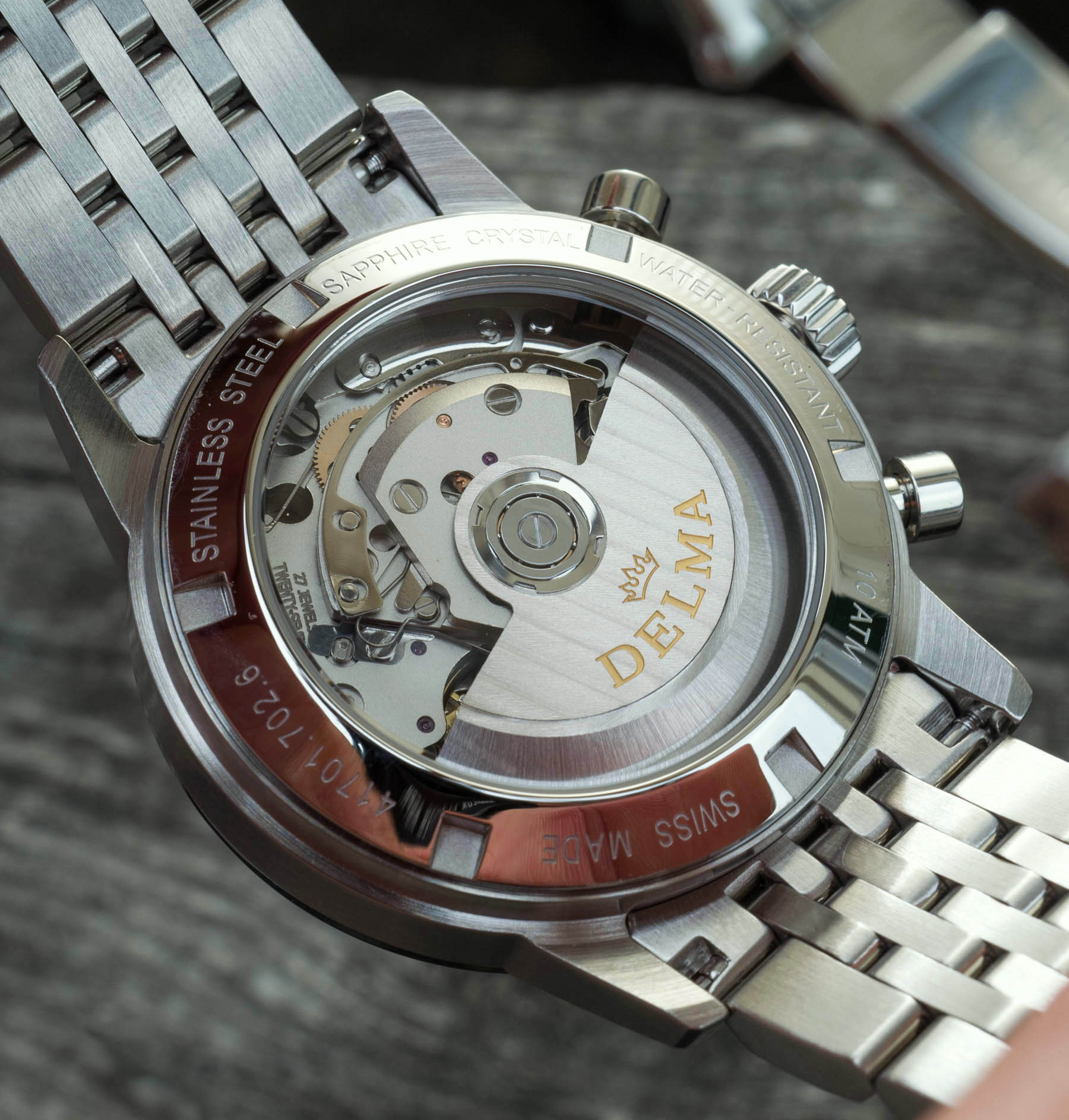 A closer look reveals the beauty of a Swiss Made case — unless regulations have recently and quietly been changed, manufacturers are not allowed to label cases “Swiss Made” if the cases themselves are made elsewhere. As long as they meet the rather lenient Swiss Made criteria, they can put Swiss Made on the dial all day long while still having their cases imported from Asia — as some manufacturers do on their multi-thousand-dollar watches. But again, cases (and casebacks) are not to be labeled “Swiss Made” unless they actually were manufactured in the country. That said, not all Swiss-made cases are labeled Swiss Made. Confused much? Thank the Swiss. Let’s move on. 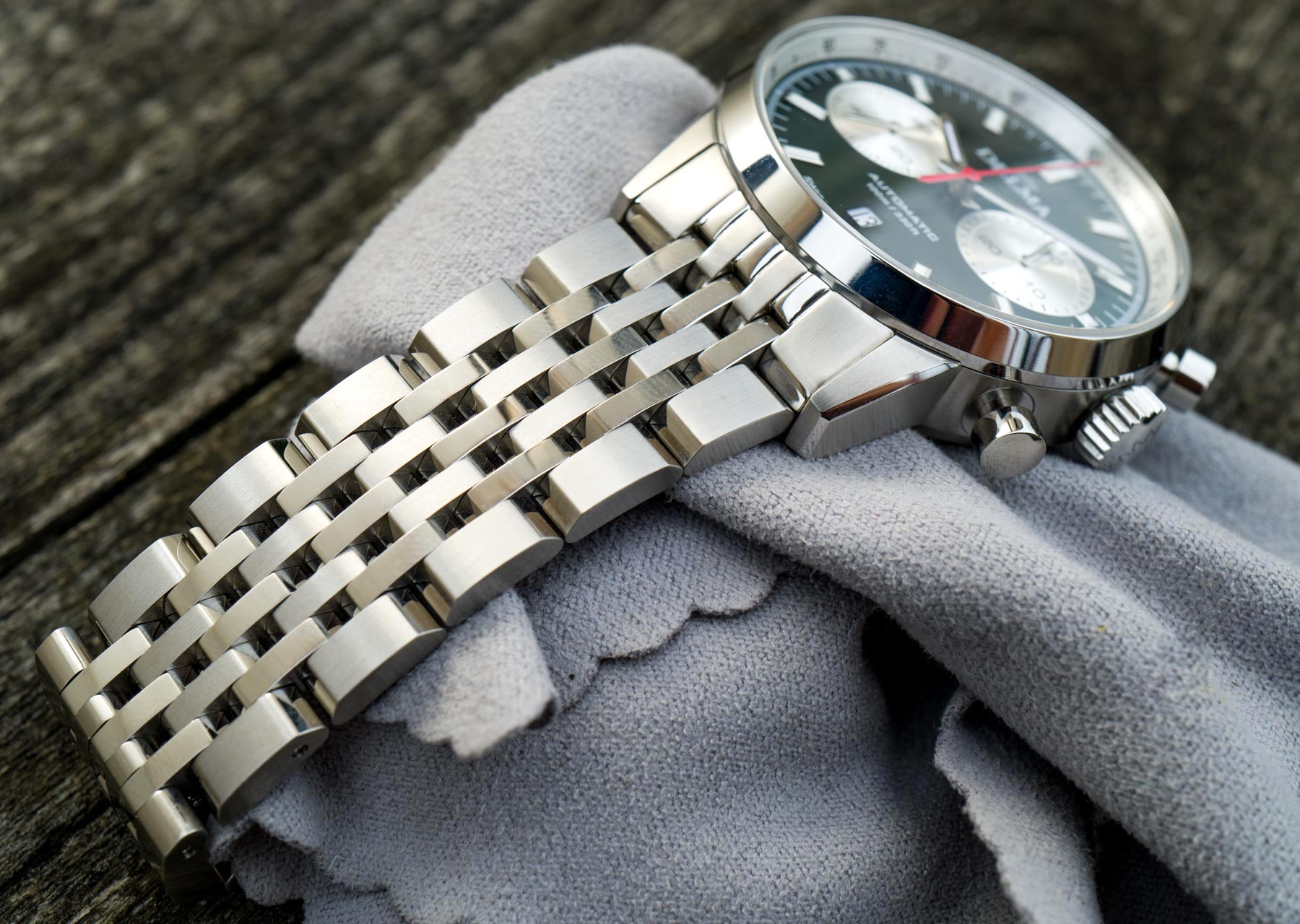 Upon that aforementioned closer look, the case, as well as the bracelet, exhibits the sort of solid quality you will be hard-pressed to find under the $2,000 mark. Lacking the compromises most bracelets offered at lesser prices bring to the table, this seven-link version looks and wears great. The hidden double-folding clasp closes with a quiet and reassuring click as opposed to a wrist-clenching snap. And it opens with two neatly sprung push-pieces as opposed to a nail-ripping pull. The links swivel with ease in utmost silence, with no rattles, undesirable flex or, on my arm at least, any hair-pulling. 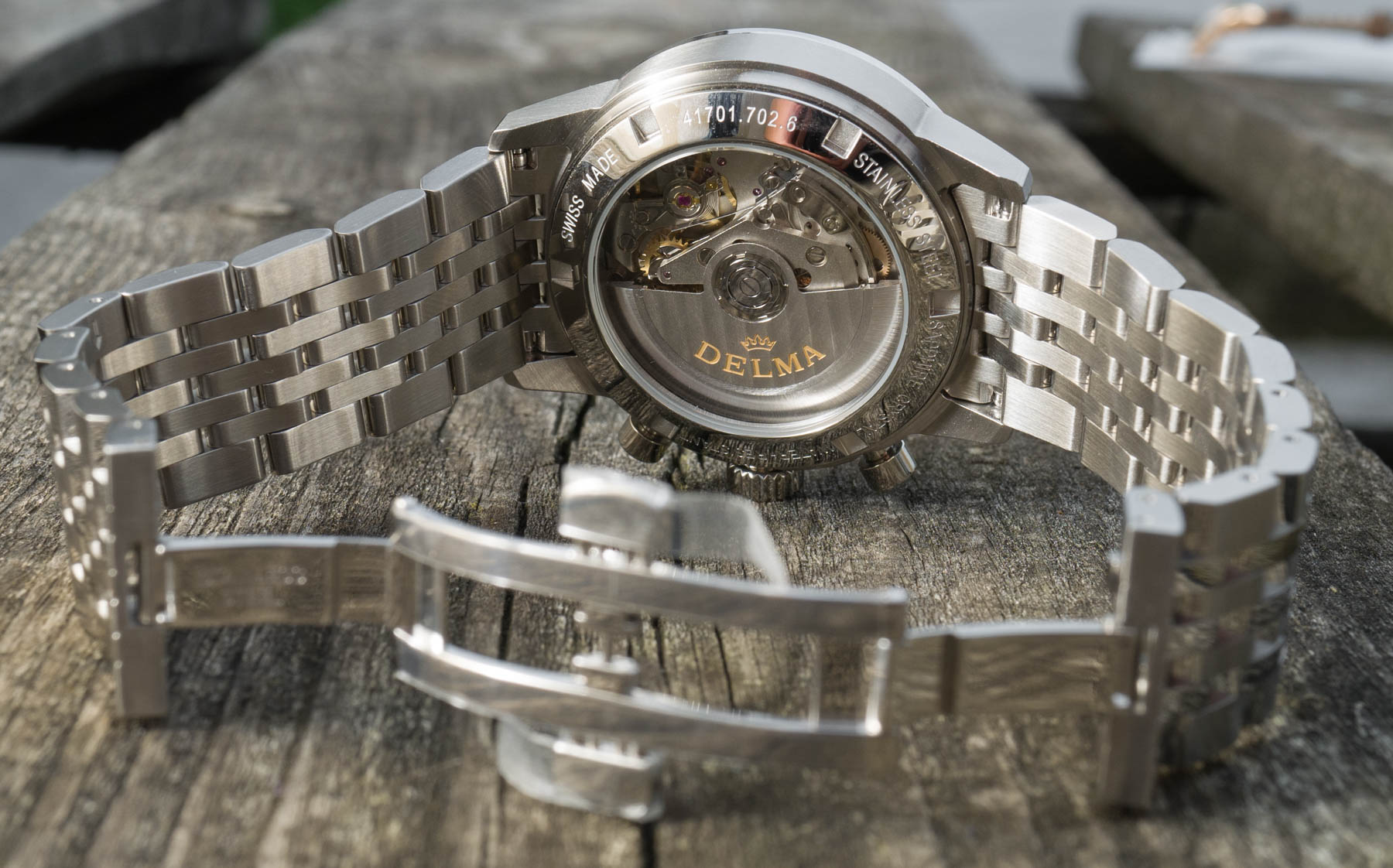 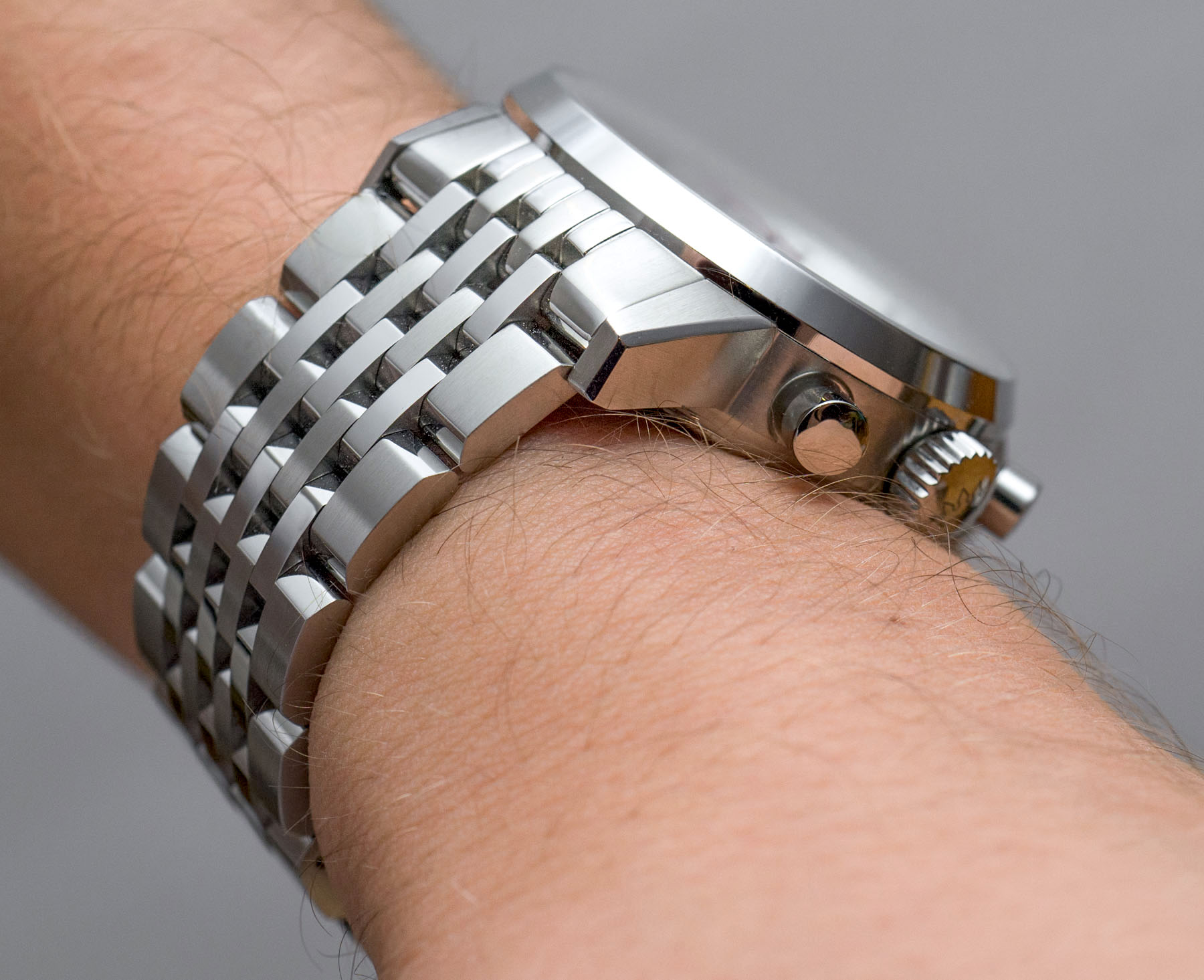 In other words, no. That €2,800 outlay won’t be getting you a Patek-like bracelet off a 5960/1A. What it will get you, though, is a bracelet and case distinctly nicer than what you’ll generally find on watches that cost half this much or less — even if those watches can have the same basic design. Whether these nuanced improvements in aesthetics, solidness, and overall fit and finish justify a deeper hole in your wallet is for only you to decide. Once you do commit to a greater financial outlay, it’s good to know that these upgrades are part of the package. 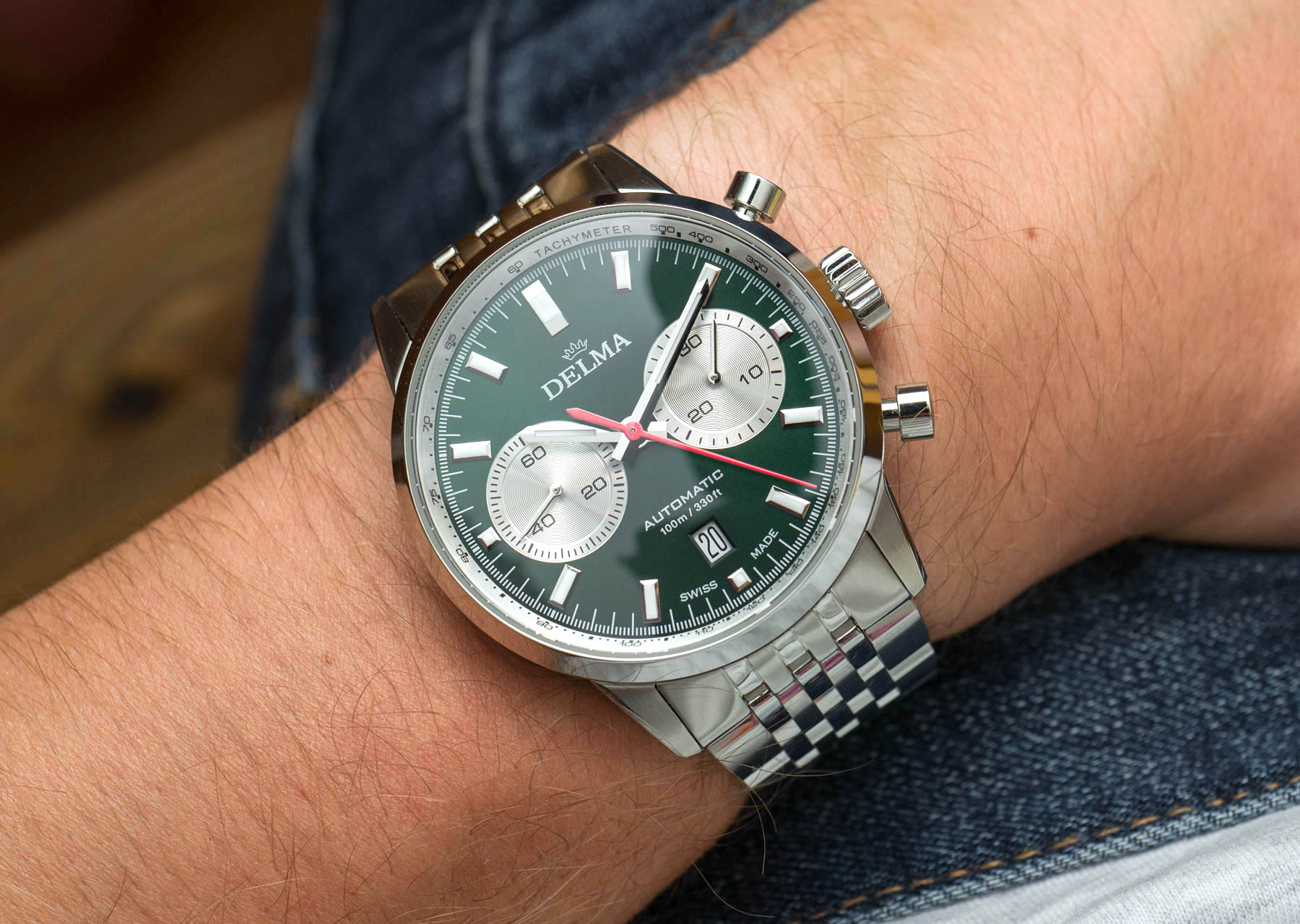 In the looks department, Delma has played things rather safe, borderline-generic with the Continental Automatic Chronograph. The only component that could really be controversial in its design is the sizing of its subdials. Finished in sunburst silver on five of the seven model variants, they are shiny and, more notably, large in relation to the size of other dial elements. The reason for this lies in the outer tracks being treated in the same silver color. This results in a more modern and casual aesthetic as opposed to the traditional and, arguably, more elegant look that would be achieved with regular-looking subdials with black peripheries. This, more or less, is the only component that really sets the Continental apart from other dual-register chronographs out there. That said, a bit of character (that verges on quirky) tends to do a lot of good during the long-term ownership of a watch, so you may not want to chalk this up as all bad. 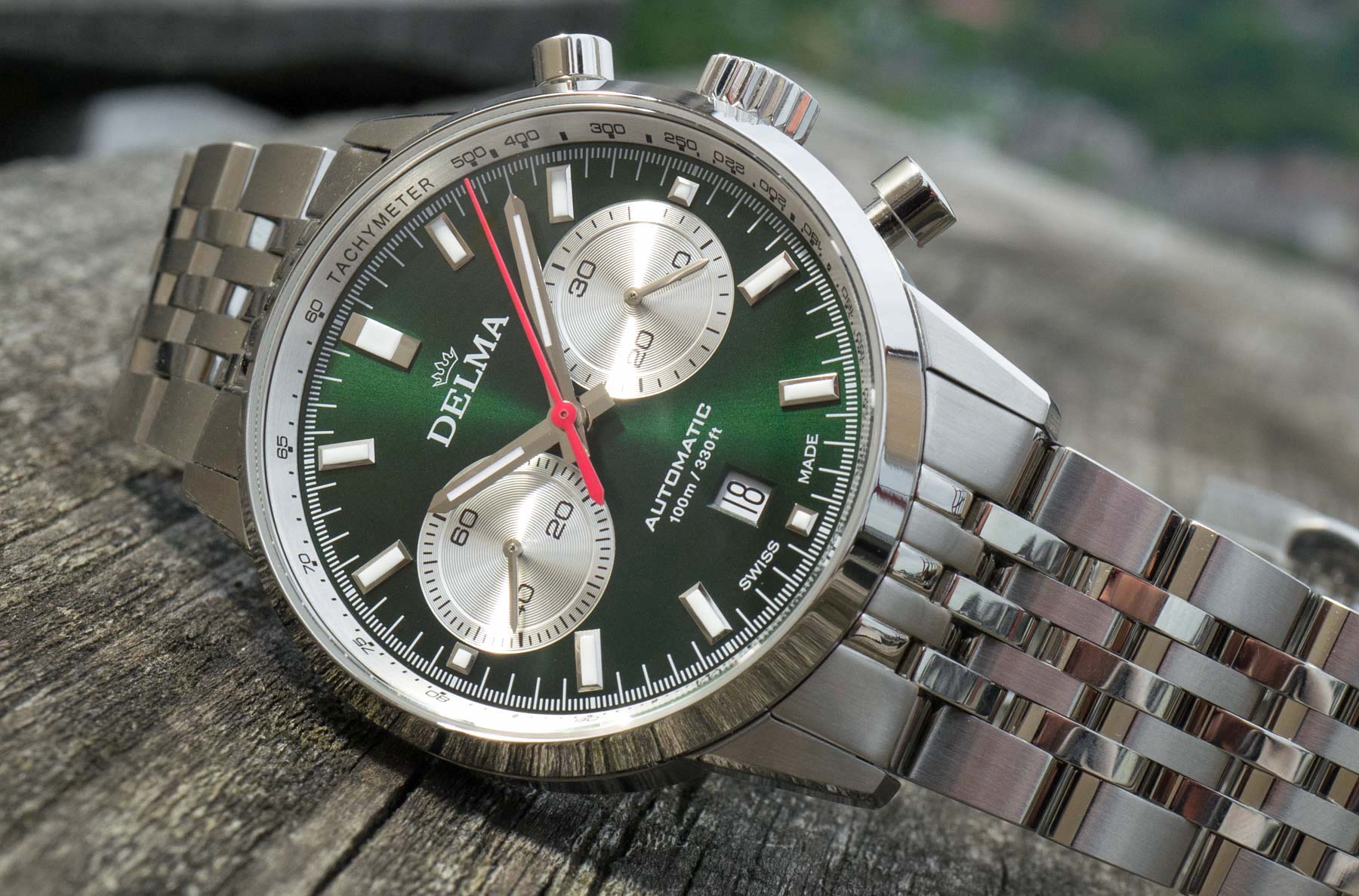 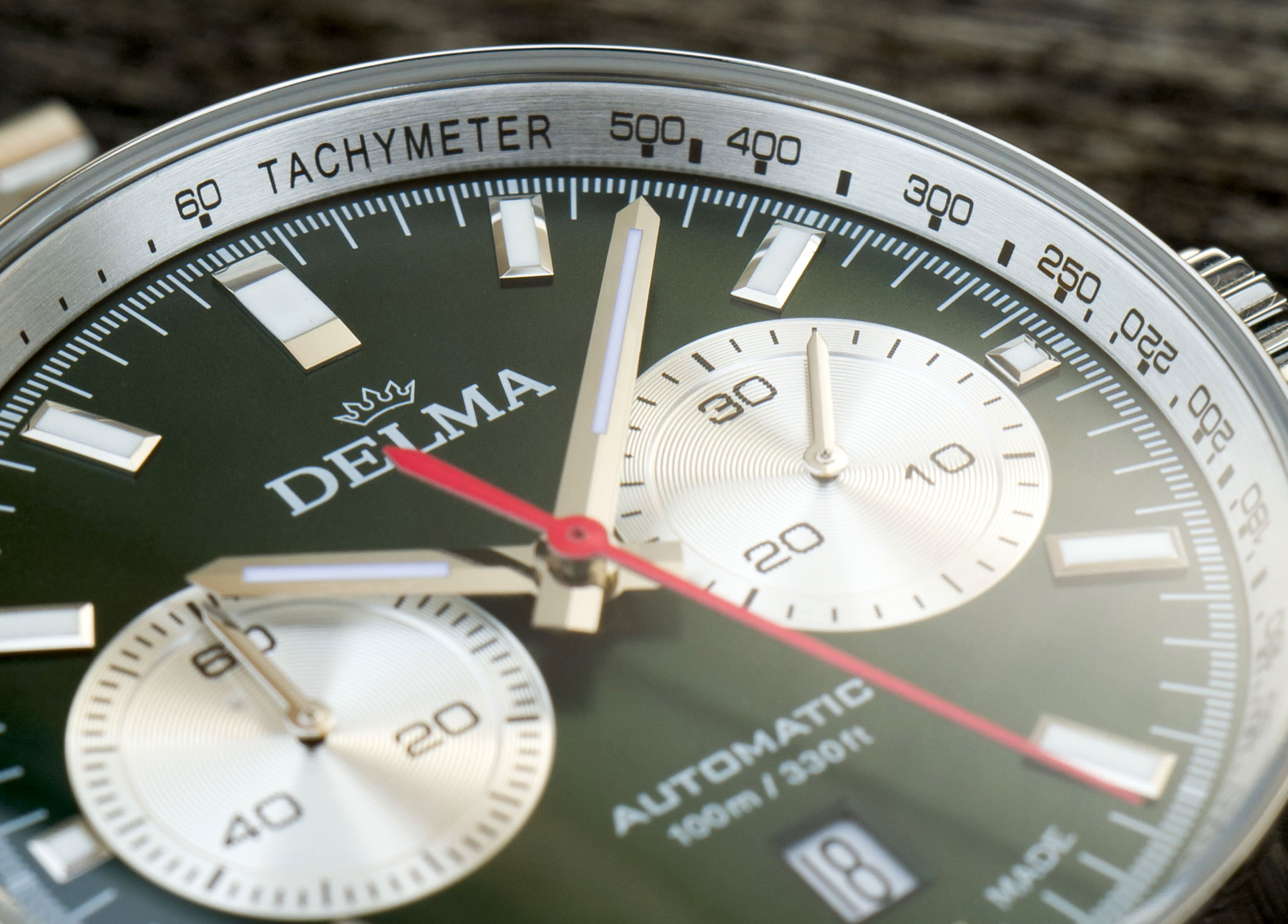 Green, blue, silver and black dials are available on the Delma Continental Automatic Chronograph, all with sword hands and applied indices. The hands, indices, and texts are nicely executed — they are not taking things to new standards, but they are done to an acceptable level. The same can’t be said about the lume on the indices. The hands are fine, as they have more consistent and more durable luminescence — but Delma will probably want to start booting the rear end of its dial manufacturer for using a rather blotchy and weak lume on the indices. This seems to be a recurring issue on Delma dials and the only objective shortcoming of its higher-end offerings. Now, this won’t be a dealbreaker for anyone but the most hardcore lume lovers, but even with that noted, the indices have to have better lume at this price point.

Weighing in at 220 grams with all links attached, the Delma Continental Automatic Chronograph is not a watch you’ll often forget you’re wearing. Again, measuring in at 42mm-wide, 15.2mm-thick, and 48mm lug-to-lug, there are some important elements that come together to improve wearability on what is neither a light nor a slim watch. The neat integration between bracelet and case, the flexibility of the bracelet even at the very first links, the width and robustness of the bracelet itself, and a large, flat caseback make this one of the nicer-wearing 7750/SW510-equipped steel watches out there. Once you have seen and worn many 7750-sized watches, you’ll know that this is no small feat. 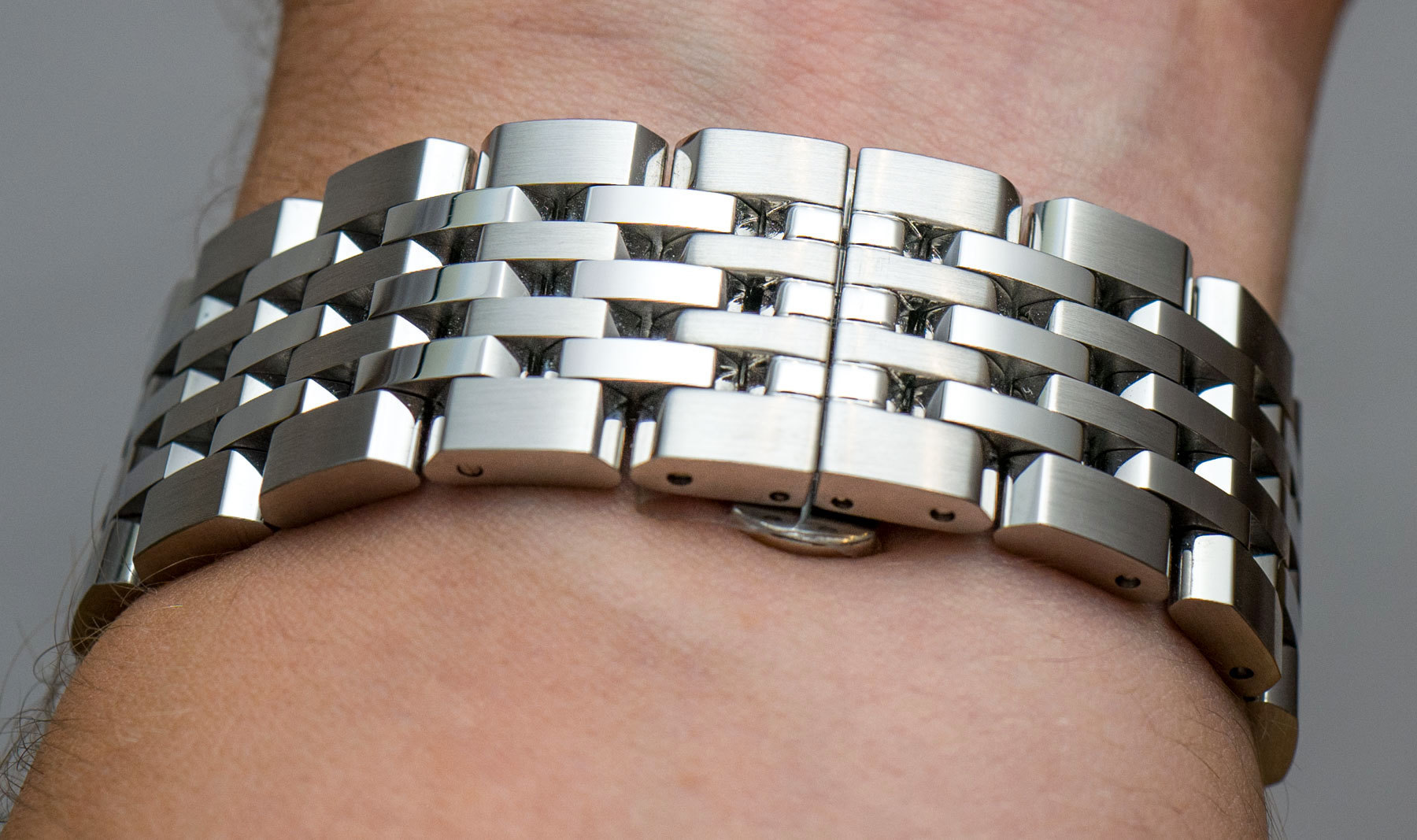 A compromise to be made is in the clasp: You have to make do without any micro-adjustments, something that is counter-balanced by what is absolutely in the top 10% of slim clasp designs out there. The integration of the double-folding clasp into the links that fold over it is super-impressive, as is the smooth inner surface of the folding components with just the four corners of the hinges being a tad sharp — but these you should not ever notice when wearing the watch. 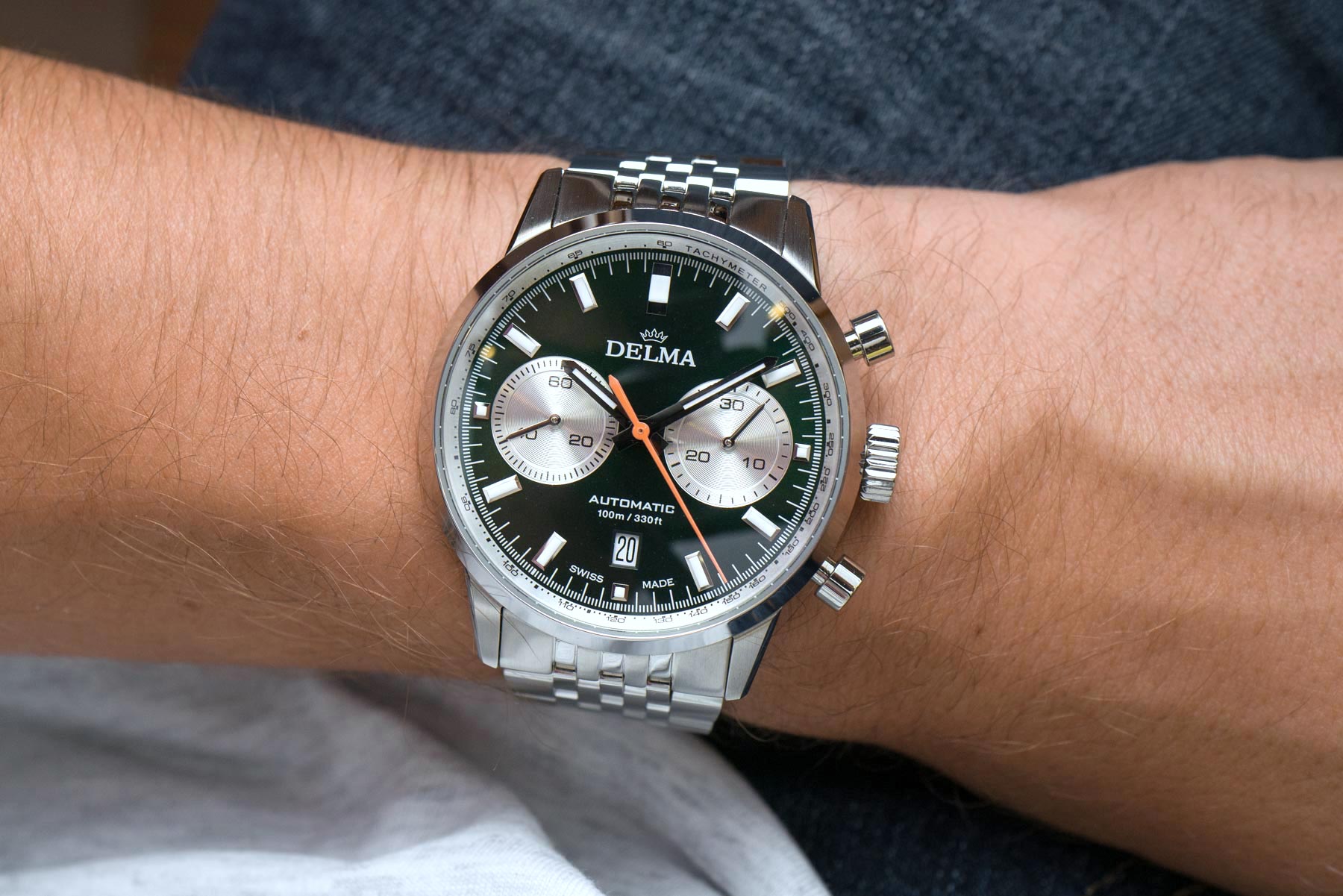 I wonder how well the Delma Continental Automatic Chronograph will do. It is a neatly made watch that matches an arguably generic look (maybe just to my eyes, that is) to a high price point for the brand. So the question is, who out there will be skipping the go-to brands with massive public recognition (like Longines) to pick up a new Delma for the same money? That’s the 2,800-Euro question — one that I don’t know the answer to. What I do know, however, is that whoever picks the Continental Automatic will get a properly made watch for his or her hard-earned money with one heck of a beautiful bracelet and nicely done case, a classic automatic chronograph caliber, and some quirky dials that won’t grow old so fast. When balanced against the limited compromises of its heft (that some people actually desire in a watch), the subpar lume on the indices, and the lack of micro-adjust, what you end up with is an impressive package. The Delma Continental Automatic Chronograph retails for €2,800 with taxes.

Necessary Data
>Brand: Delma
>Model: Continental Automatic Chronograph 41701.702.6.141
>Price: €2,800 as tested
>Size: 42mm-wide, 15.2mm-thick, 48mm lug-to-lug, 220 grams on the full bracelet.
>When reviewer would personally wear it: Weekdays.
>Friend we’d recommend it to first: Has this budget to spend and wants something that is versatile-looking yet off the beaten path.
>Best characteristic of watch: Great for everyday wear. Beautiful bracelet, Swiss Made case, and un-boring looks.
>Worst characteristic of watch: A bit too heavy on the wrist and the wallet.