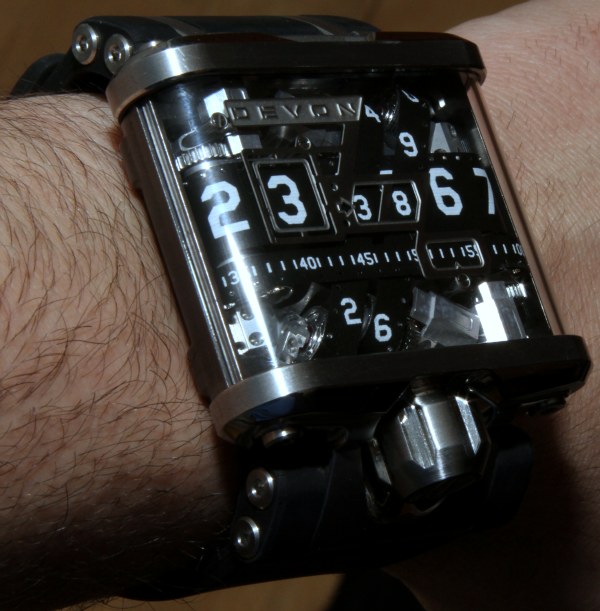 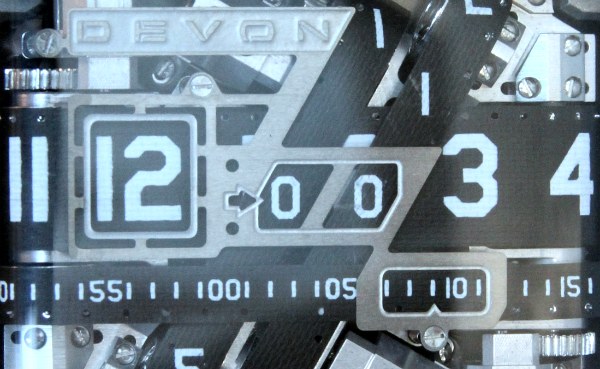 The basic theme of this electro-mechanical timepiece is that time is told on belts (the treads) and read through windows placed over segments of those belts.

It doesn’t take long to figure out how to tell the time when looking at the dial – even though you see a lot going on. This isn’t the first watch to tell the time via belts, but certainly is one of the coolest to do so. In a nutshell, the Devon Tread 1 offers a totally unique wearing experience that is  much more akin to a electronic gadget that a traditional timepiece. It transcends both the watchmaking world and the gadget world, but borrows heavily from each. It is the Tread 1 one, and it is certainly worth knowing about.

My first hands-on experience with the Tread 1 watch was outlined here. The video I took of a prototype got a surge of views (and was pretty cool I have to admit – you can click on the link to check it out ). People never saw anything like it, and it goes without saying that the watch has a significant “gee whiz” factor to it. For many, it is the ultimate watch gadget – and in many ways it is.

While the Tread 1 is large, Devon did a good job with the design to ensure wearing comfort. The case is 53.3mm wide by 47mm tall and 19mm thick. I have small wrists, so the watch will likely not look at large on your arm. As you can tell, the lug structures that the rubber strap is attached to slope down considerably in order to have the watch wrap around the wrist. This helps the watch be more stable and comfortable. 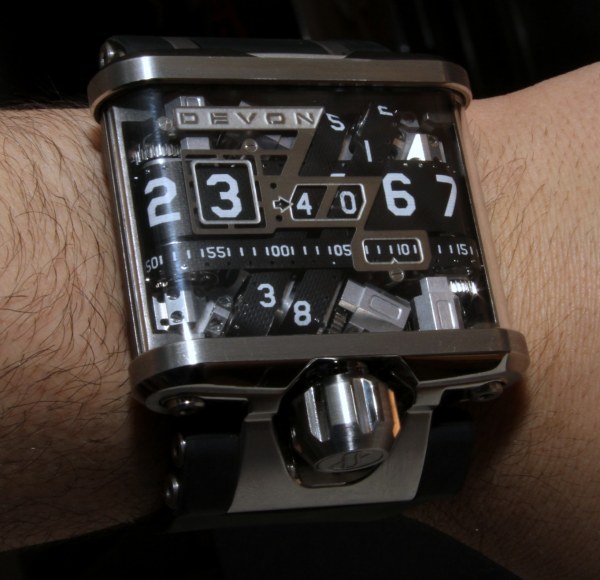 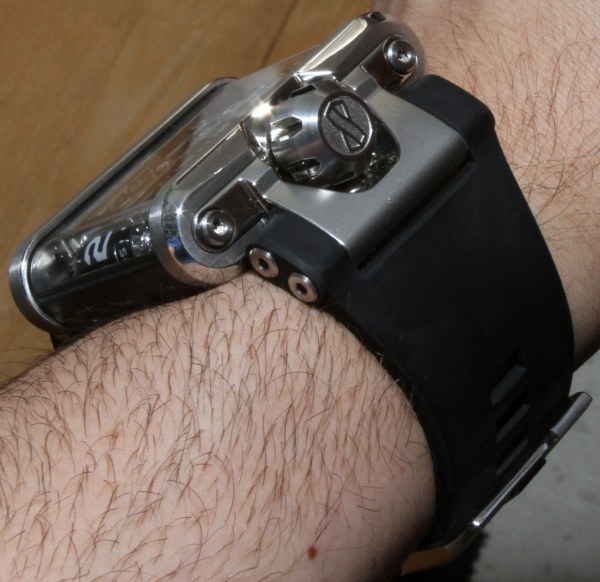 The watch case is steel, but the back of it is DLC black coated steel. There you will also find the unique serial number of the watch. It is also where the watch sits when you are charging it. The crystal is polycarbonate – the same material used for bullet-proof glass. It is also AR coated for clarity. Inside the watch is a complex assortment of microstep motors, belts, and a processor. It is a quartz regulation based device, and according to Devon it is thermo-compensated which means it should be more accurate. The processor controls the functions and all the small motors. Rather than have a crown, the watch has a controller. You sort of operate it like a crown though, and is placed at the bottom parts of the case. 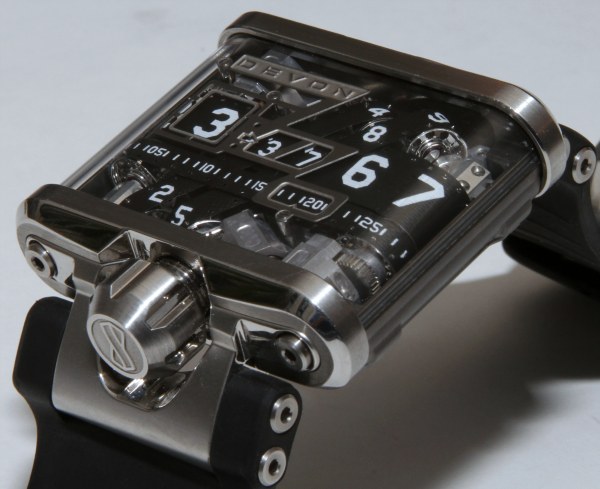 Looking inside of the watch is a treat. What is really special – especially for seasoned watch lovers is just how different it is. It looks more like a machine than something you’d see in a Swiss watch. There are screws and belts, and plates. It looks like some was playing with the world’s most complex Erector set. Seeing everything work together helps you appreciate how difficult it was to design from scratch. Few people in the mechanical watch world ever design things totally from scratch as there is generations of knowledge to build off of. For Devon, no one had ever done anything like this – so they have little to guide them.

The small one-step motors I understand were originally designed for use in medical devices. They move in just one position at a time, and the on-board controllers helps tell them how many times to move. Watching the Tread 1 operate never seems to get old, but the watch is loud. Devon tried to dampen the noise as much as possible, but each time a tread moves (which is every second with the seconds belt) it makes noise. It isn’t quite a “tick,” more a quick grind as the motors turn the belts. 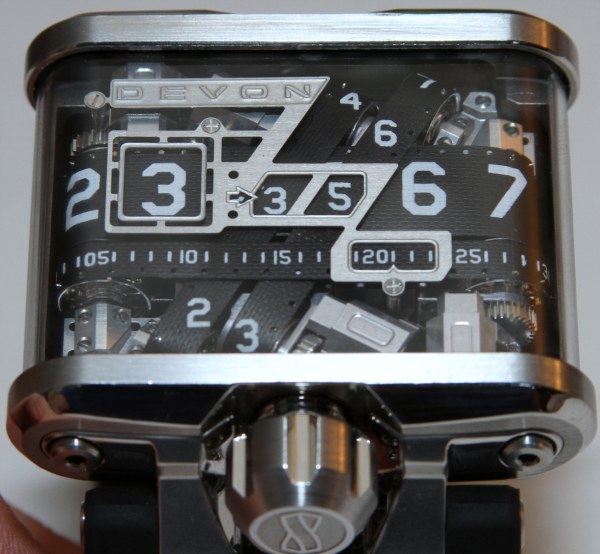 While the watch is loud, Devon does include a “quiet mode.” In this mode the watch stops showing the time and goes silent. Internally it still tells the time, but doesn’t show it until you de-activate quiet mode. It is a good idea that Devon included this. You can learn more about quiet mode and how to operate the Devon Tread 1 by looking at the online instructions manual here.

While the sound of the Tread 1 can be distracting at certain times, at other times you might see it as a benefit. This is a watch meant to attract attention, and it does that both visually and through sound. Imagine for instance that you are in an elevator with a few people. They are all gonna hear the Tread 1 and look straight at your watch. What other high-end timepieces literally call attention to themselves like that? 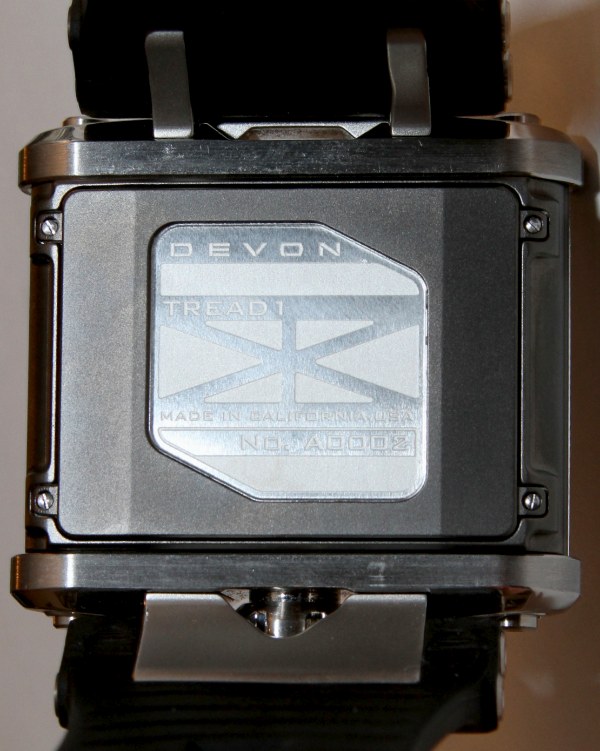 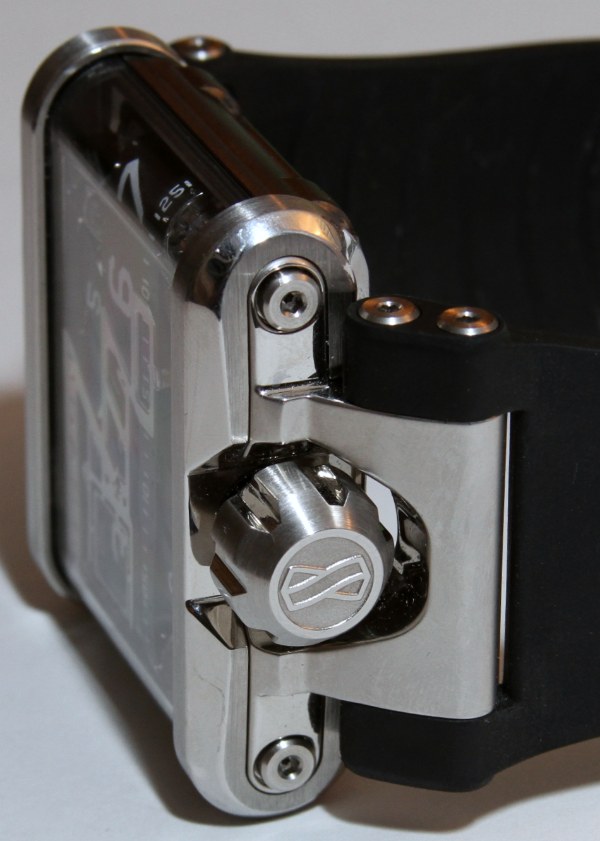 Reading the time and wearing the watch is pretty easy. The wide strap and unique buckle are cool to say the least. Operating the Tread 1 is also pretty simple once you read the instructions. The watch runs off a lithium polymer battery that lasts about two weeks during normal use. You don’t replace the battery regularly but rather charge it. To do this Devon includes a magnetic induction charger that you simply place the watch on top of. The seconds belts also doubles as a battery life indicator because it will move in two second steps when the battery life is running out. Given all the power that the watch consumes, I would say Devon made the best of the situation. By the way, the watch does have an ON/OFF function as well to conserve energy. 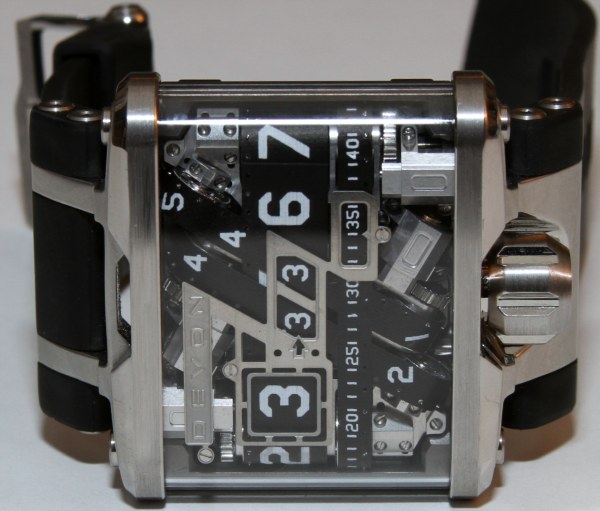 When it comes down to it this watch pretty much epitomizes California cool. It took suave geeks to make this work and to design it. It plays games with the traditional notions of high-end watches and succeeds in offering something special that hasn’t been done before. It has its quirks, but that gives it personality. According to Devon, more watches are coming, but the same concept should remain the same. This is so much more than a gadget watch, it is a lifestyle watch for gadget lovers – and I am totally one of those people. It is hard not to want one of these. Price is $15,000.