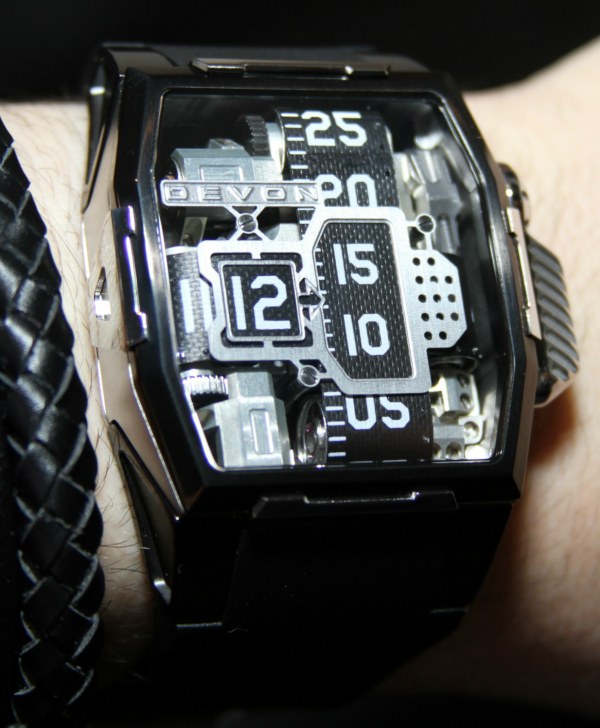 About two years ago the watch world was greeted with a strange announcement that Scott Devon was building a $15,000 (now a bit more expensive) electro-mechanical wrist watch in California. For the most part the Swiss and other Europeans dismissed the news and went on with their lives. Then the Tread 1 watch came out. It was totally novel in its design and engineering – and ended up not only getting a lot of attention, but also a few very prestigious awards. The quirky and super cool timing machine had a larger impact than anyone could have imagined – and now Devon has released a follow-up model called the Tread 2.

The Tread 1 is a large and interesting watch that I reviewed hands-on here. It has an imposing squarish case and can sound like an adding machine on your wrist. The Tread 2 on the other hand is smaller, designed with a different ethos, and priced about $5,000 – $8,000 less than its big brother. While it is less expensive, I feel that it is a better timepiece for most people. This is not only because it fits on more wrists, but because of its increased utility as a daily wear. 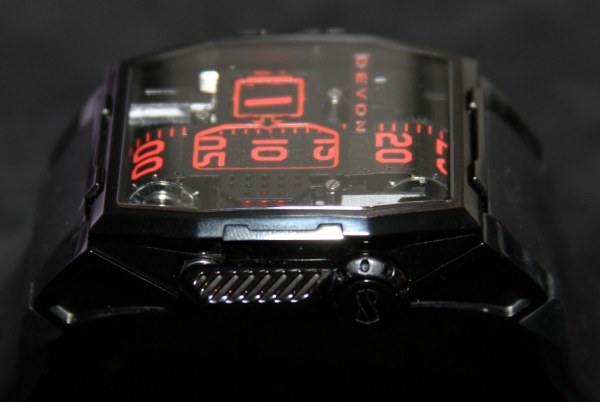 One thing was clear when Devon was making the Tread 2, it was supposed to be smaller, and have two, versus three belts systems. The Tread 1 has a dedicated belt to indicate the seconds. Logical, but noisy. It now has a “silent” mode where the seconds are not displayed, but when they are the watch sounds like someone who is very slow at typing is living on your wrist. This has to do with the small one-step motors in the case and the “bullet-proof glass plastic” crystal. It actually didn’t stop that many people from wearing the watch, but for the next model Devon wanted to build something more quiet. The Tread 2 does not have a second’s belt. However, there is a function to turn the minute belt into a seconds indicator if you want to measure seconds. As for quietness, the Tread 2 is not only more quiet because it is missing a seconds belt, but because it now has a different case and sapphire crystal that insulates the sound much better.

Reading the time is quite easy, and various models of the Tread 2 are available with different color steel cases and numeral colors printed on the belts. Size-wise the case is 38mm wide by 42mm tall and it is tonneau-shaped. Not a small watch at all, it does feel petite next to the much larger Tread 1. The case is also a totally new design. Feeling futuristic in a bit of a 1980’s modernism manner, you’ll find that a lot of high-end Swiss watch brands are also offering watches that focus on this era’s design aesthetic in 2012. 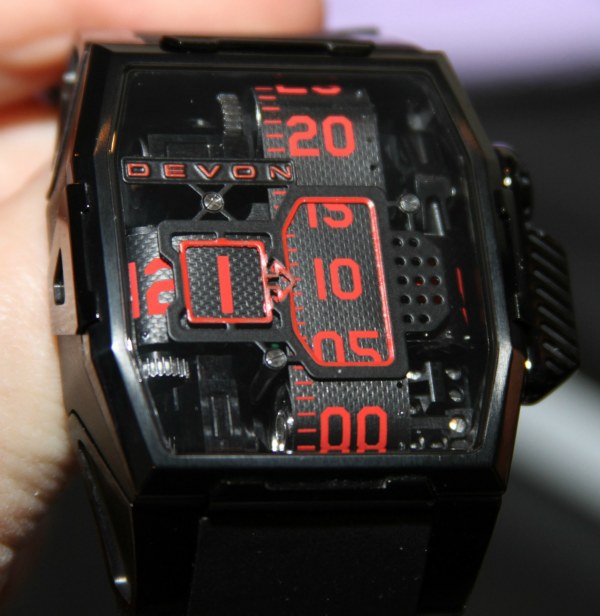 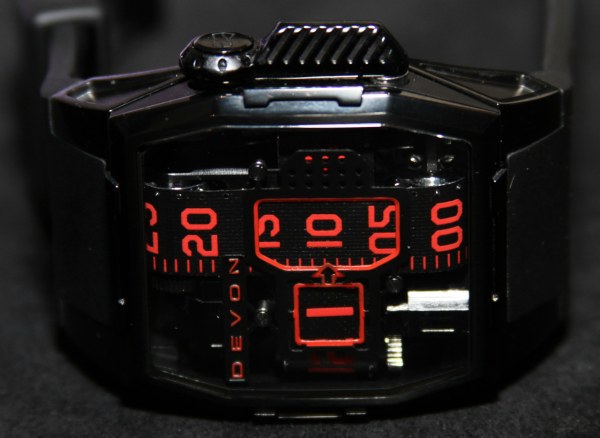 The case here is seen in both DLC black and mostly polished steel with some DLC black components. The strap is rubber and the watch is more comfortable than ever. Even the Tread 1 was surprisingly nice ergonomic given its size. However, the Tread 2 is more universally attractive and feels more cohesive given the compact design. While it doesn’t have that wrap-around crystal that the Tread 1 has, the Devon Tread 2 still offers a neat view into the movement where you can see the little one-step motors in action. There is also some water resistance now. Not much at 10 meters, but you can safely wash your hands with it. 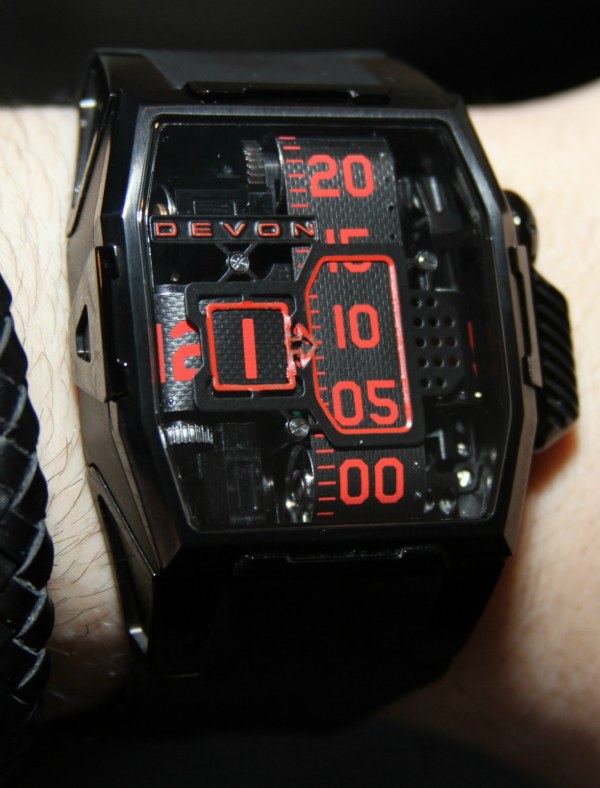 Rather than a crown the Tread 2 offers a pusher and two way lever that allows you to adjust the time and access the features of the watch. Devon’s engineer really improved the user experience with the Tread 2 making the watch more logical to operate and simple at the same time. It takes only a few minutes to fully grasp what it does and how to use it.

Like the Tread 1 the Tread 2 is powered by a lithium ion battery that is rechargeable via a magnetic-induction dock. The battery is rated to last about 2 weeks with average use. That seems appropriate, and during my test of the Tread 1 I found that charging it on the dock was a simple matter. For those who were intrigued by the Tread 1 but perhaps put off by the size or price have a new and expanded opportunity to enjoy the Devon concept with the Tread 2. It is not cheap, but priced at around $10,000 is is certainly a more accessible price than the Tread 1. Look for the Devon Tread 2 to be commercially available a bit later in 2012.