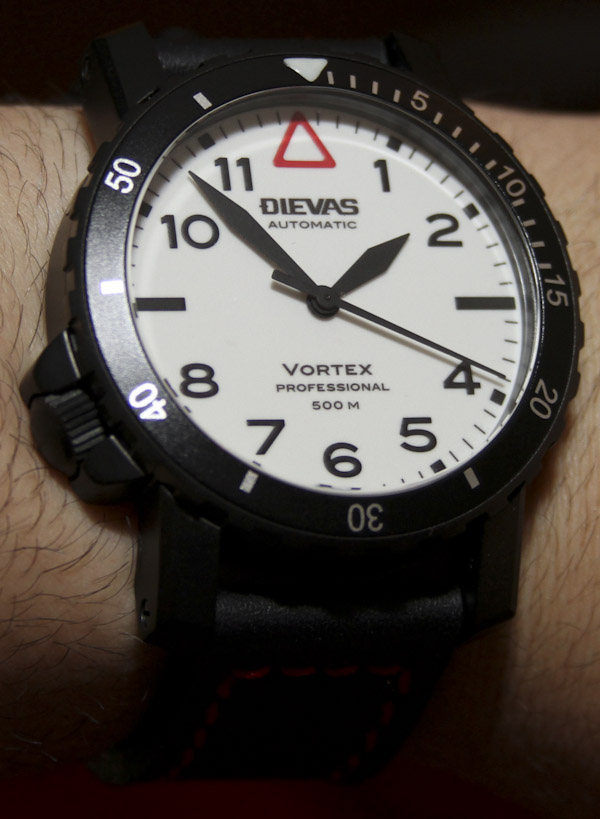 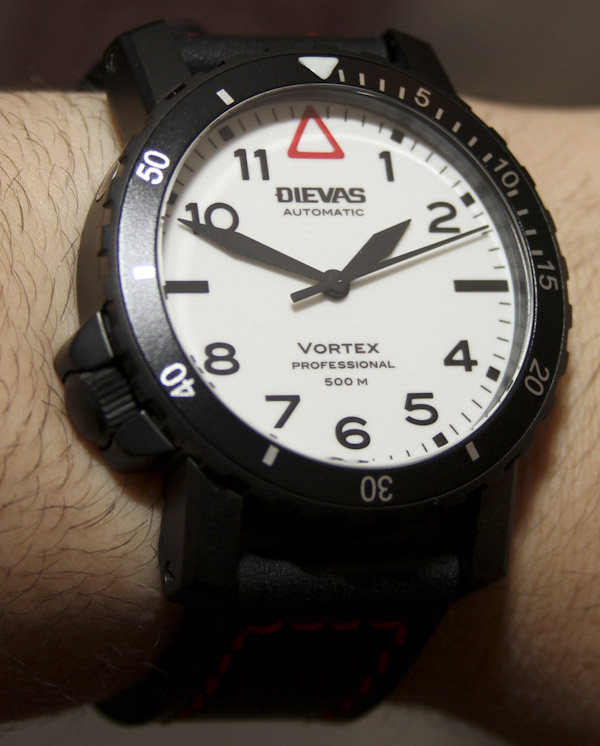 I first want to say that this watch has intense lume. Any watch with a dial such as this mostly covered in luminant is going to glow like crazy. With dark hands and hour markers, the contrast is perfect, but done in exactly the opposite way most watches approach the use of lume being on the hands and hour markers alone. This is my first experience with just such a dial and I have to say that it can come in handy. It is also apparently part of the “pro” that makes this Dievas Vortex watch the Vortex Professional.

The original Dievas Vortex watch was released in the summer of 2009. I remember it well, and appreciated the newly designed watch that felt like something truly different from the brand. I wrote then, as I still feel now, that the Vortex is a pretty successful combo of an aviator and diver watch. Two years later the handsome watch was followed up with the Vortex Professional that I debuted here. The Pro version added a specially coated case, different strap, and more legible dial – and now I have reviewed it for you. 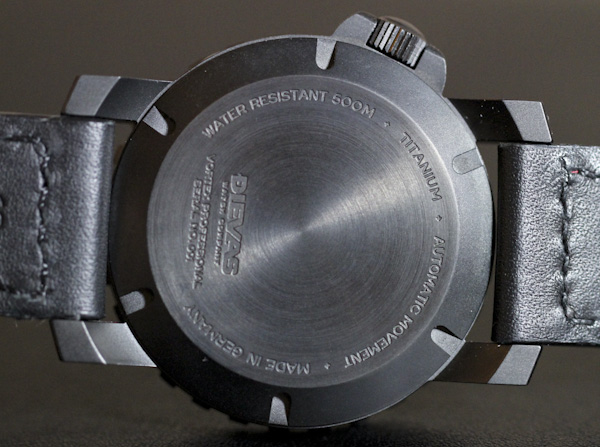 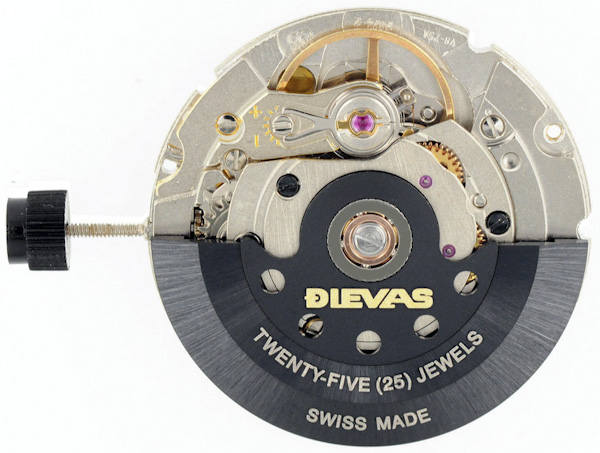 One thing I can say for sure, Dievas did pull off an even more serious looking version than the original – and by serious I mean better suited to serious duty for military folk (and people who like to pretend they are military folk). The only thing I believe that these types would change is the strap. Not that I don’t like the black treated leather with red stitching, but rather I think it is more fashion and function. I would keep that strap for street use, and get an all black strap for more “kill or be killed” use. Actually, Dievas offers the strap with red or black stitching which I now learned after looking into it.

All this talking does get me wondering – “what does your typical soldier of fortune buy these days to wear on their wrist?” At the very least I want to know what some militia members up in the Dakotas are using to hunt un-American types. I would very much like to poll these people on their timepiece consumption habits. Would they choose a Dievas Vortex Pro? Maybe. At least I know they would enjoy it if they did. The larger sized 44mm case is comfy and feels purposefully designed. You have 500 meters of water resistance, an automatic helium escape valve, and a sapphire crystal. Funny how on some watches 44mm feels large and on some it feels small. This one wears on the larger side. 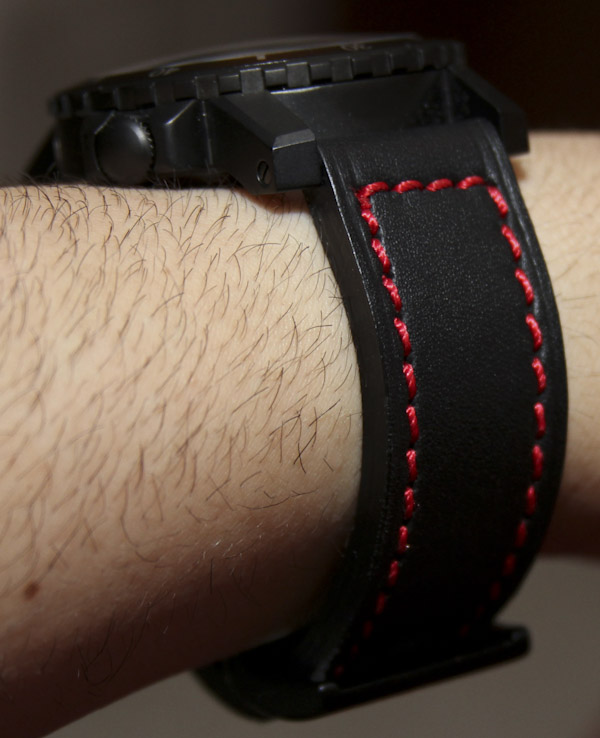 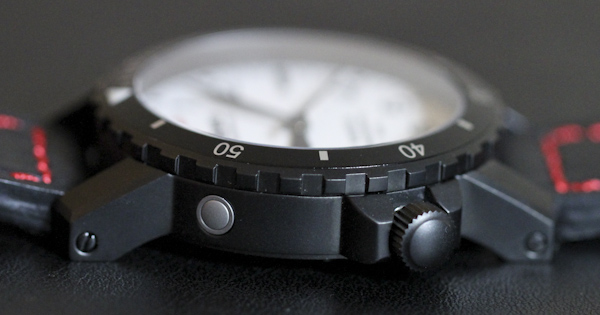 On the Professional version you have a black coated case. I originally said that it was DLC coated, but now Dievas uses different language on how it is coated. The brand does goes into significant detail on the durability of the coating process. I believe that I got an entire press release on it – complete with pictures. Specifically, the case is “scratch resistant Plasma treated titanium.” The titanium is first sandblasted and then coated. I haven’t attacked it with a screw driver but it feels pretty stable and I’ve always been a fan of the look of sand-blasted titanium. It also helps keep the watch light, and the coated titanium is going to be much stronger than naked titanium. Still not entirely sure what the coating process is all about.  Going to be at least as durable as the best PVD coatings if not much better. 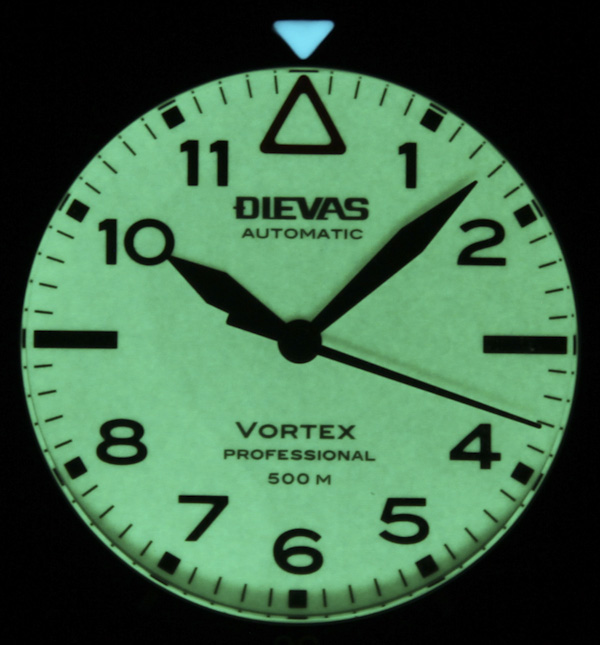 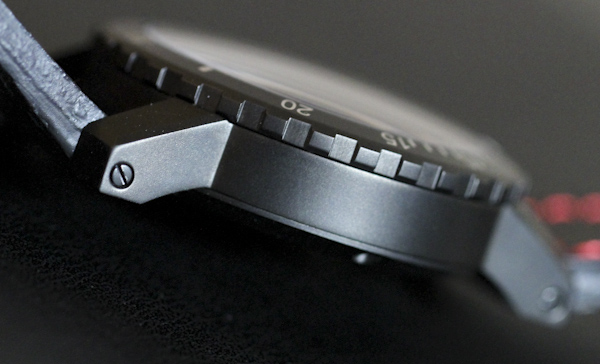 The case design again feels like a cross between an aviator and a diver. While it functionally looks like a diver on paper, it does have a larger dial and thinner bezel like many aviators. Still, the bezel is a diver style bezel, and there is that 500 meters of water resistance. The dial is about legibility. It isn’t quite as sleek looking at the regular Vortex, but legibility is higher. I appreciate the pilot watch style hands and large Arabic hour indicators. That large red-bordered triangle is all aviator… Not to take down the coolness factor, but this might be a nice timepiece for people who have trouble reading their watches due to poor vision. 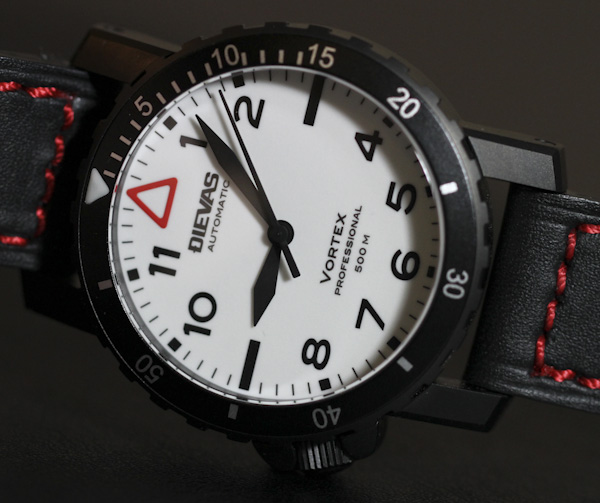 I think that Dievas should also offer a rubber strap for this watch. I think that will be useful to many people. Still, the leather strap is water-proof treated. Little details like that make it clear Dievas is doing everything possible to stand by the “Professional” part of this Vortex’s name. Inside the watch is a Swiss ETA 2824-2 automatic movement which is a solid work-horse. Nothing fancy, but it gets the job done. Dievas augments it with a custom black rotor. It is overall a cool watch with some interesting features for the right crowd. The original Dievas Vortex is likely a better mainstream piece given the more traditional dial style, but this Professional version does keeps its promise by adding extra case durability and a more legible dial. Price is a reasonable $1,130 and you get learn more or get one online here.