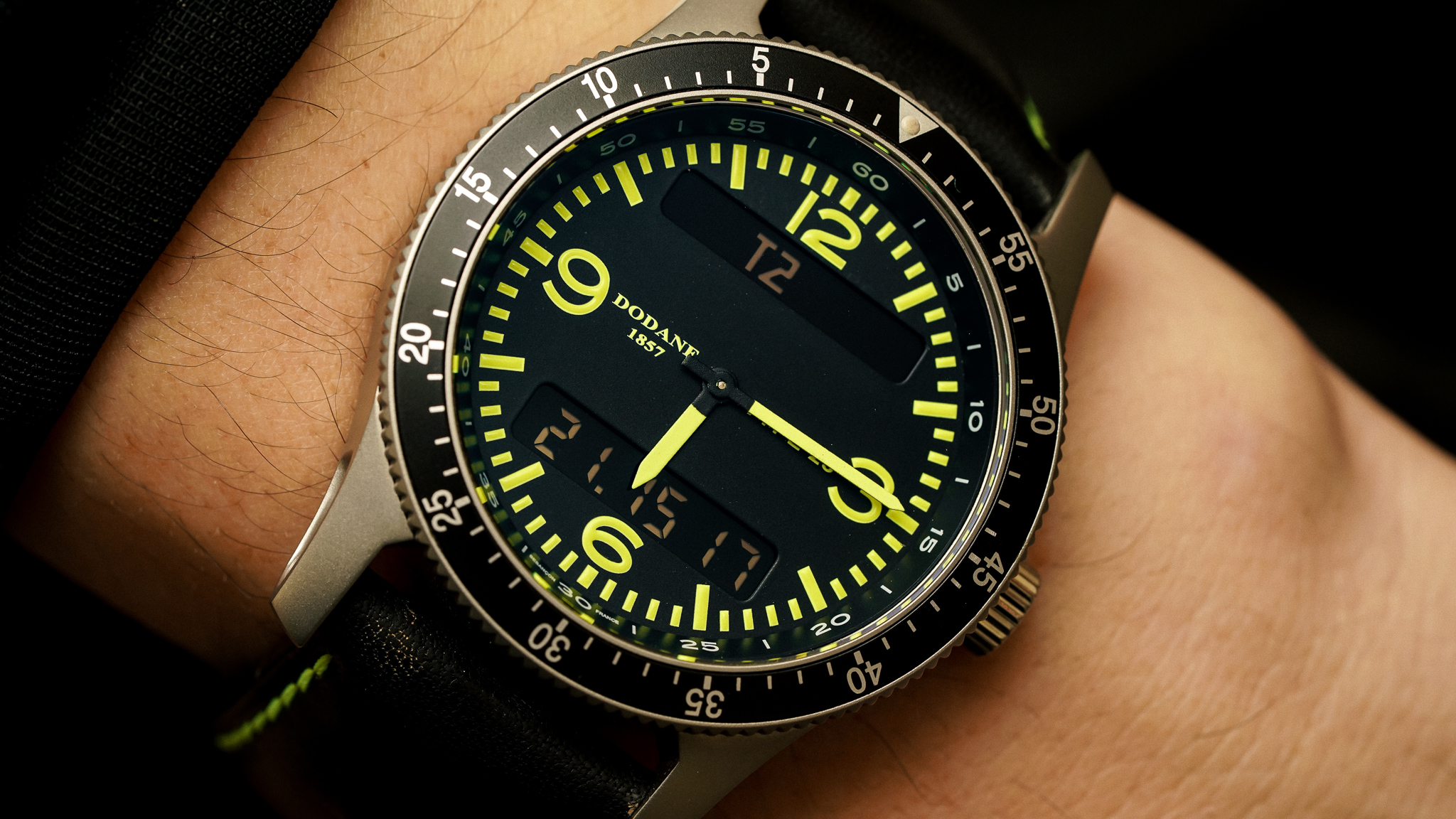 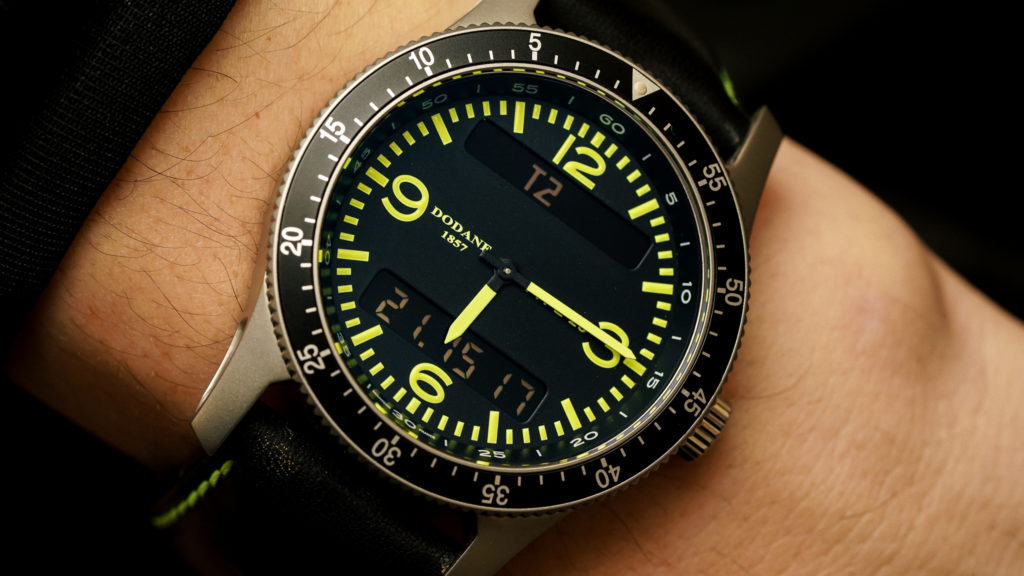 Just as there’s a time and a place for a mechanical watch, I’d argue there’s one for quartz, as well – there’s an undeniable convenience of having a super-capable and staggeringly accurate adventure watch always running and at the ready – whether it’s on my wrist, tucked into my carry-on, or sitting in the top drawer of my desk awaiting its next mission. Dodane’s Type 23 Quartz embodies this spirit to a tee, like a beautifully made, but highly specialized tool watch that utilizes a staggeringly accurate digital quartz ETA movement with dual LCD screens to display different timekeeping functions. However, there’s a little more to the story behind Dodane’s signature chartreuse “BNL” dial, which bears a neat little secret that can only be fully appreciated by an actual fighter pilot. 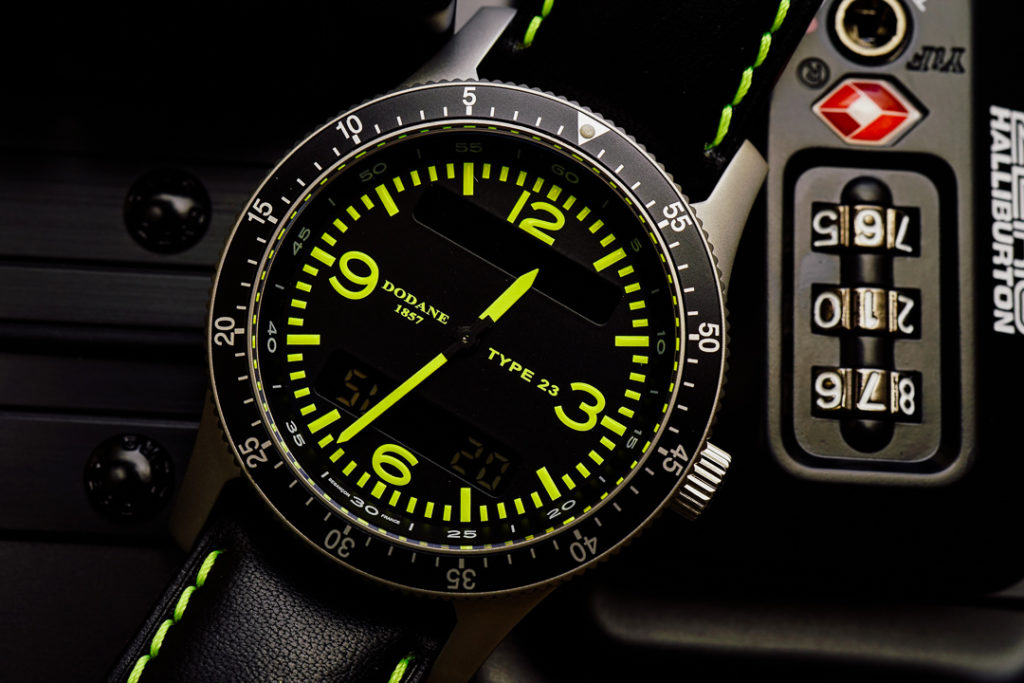 In an era of overwrought marketing hype and precious few remaining secrets in the watch industry, French indie Dodane remains a quiet outlier – a surprisingly unturned stone in a sea of manufacturers who go to great lengths to produce evidence of heritage. Here we have a proudly French watchmaker who has been making small numbers of excellent tool watches – without fanfare – for French aviation personnel, NATO air forces, and military branches for over 150 family-owned years. But it gets more interesting: Of the original six contracted suppliers of pilot watches to the French Ministry of Defense during World War II, only two are still in production: Dodane and Breguet. 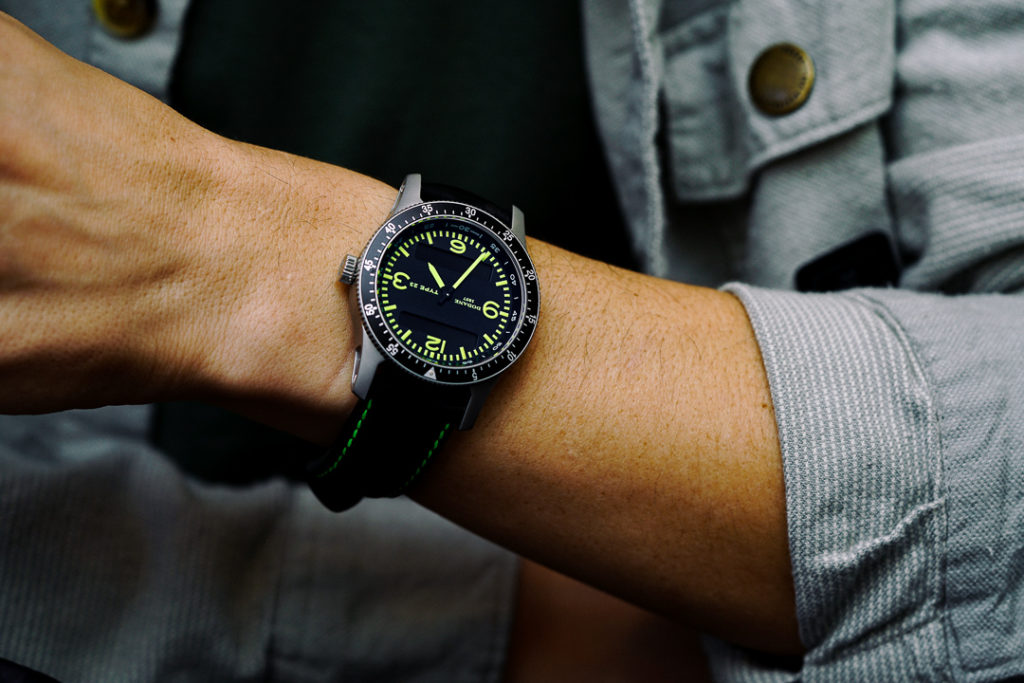 This shouldn’t come as too much of a surprise, as Dodane’s signature Type 23 mechanical chronograph shares a fair amount of visual DNA with Breguet’s iconic Type XX chronograph, though it’s worth noting that the Breguet would be considered a luxury product – the Fifty Fathoms of pilot watches, for comparison’s sake. But where Breguet took a sharp turn upwards towards haute horology, Dodane has remained faithful to its roots, manufacturing not just military-issue watches, but also the actual clocks affixed to instrument panels in military aircraft, like the Dassault Mirage 2000 (essentially, the French F-16). And though not the case for this particular quartz watch, it’s worth noting that all of Dodane’s automatic offerings can be sent off by request to formally undergo observatory chronometry trials, whereupon each watch’s accuracy is measured in multiple positions and temperatures as it relates to Earth’s motion around the sun, and certified as an observatory chronometer upon completion — again, without fanfare, simply because it’s the way things have always been done in Besancon. 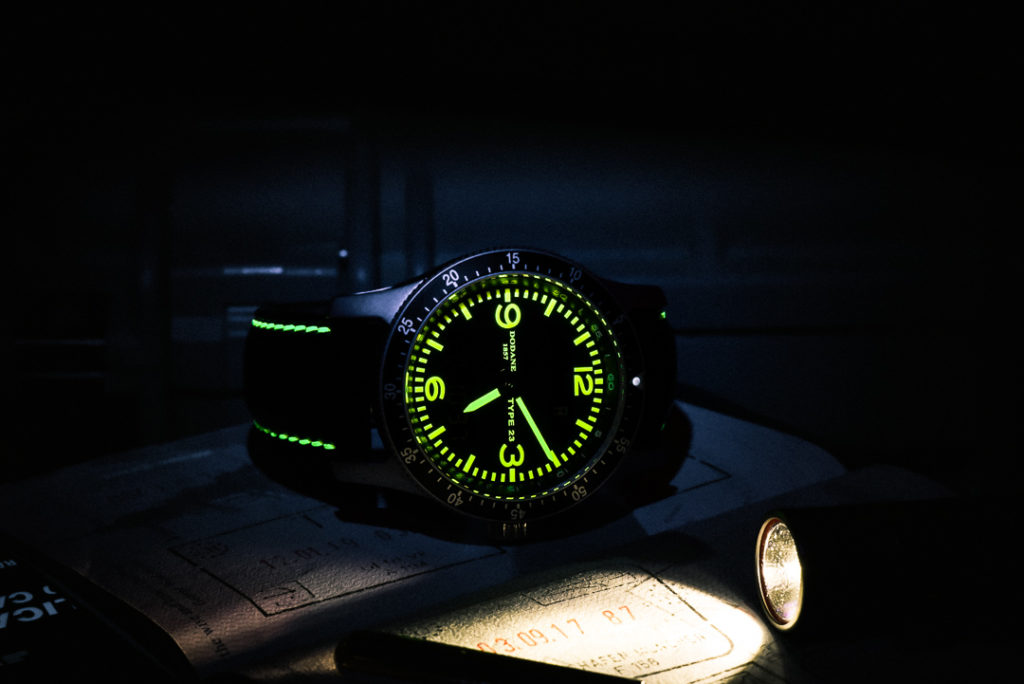 With its long history of active military use dating back to the first World War, the Type 23 Quartz was developed in response to a modernizing French Air Force, who demanded not just an ultra-accurate mission timer, but also a more economical modern alternative that could adapt to the changing technology in the cockpit – like night vision. It’s important to note that this particular “BNL” (bas niveau de lumière, or low-light LumiNova) dial variant does not luminesce as one would expect after a quick charge in sunlight or from a UV torch (though it fluoresces green under UV, which is quite cool). That’s right – despite its blindingly bright appearance, only the bezel pip is filled with traditional Supe-LumiNova. However, the reason for this is that this particular shade of chartreuse yellow is designed for use with night vision goggles worn by pilots. A traditional dial with Super-LumiNova would otherwise create a distracting “blooming” effect and could cause far greater legibility and, potentially, even safety problems. Thankfully, the sharp contrast between the black and yellow in the dial not only looks awesome, but it also yields just enough legibility to make out the dial in all but the darkest airline cabins. 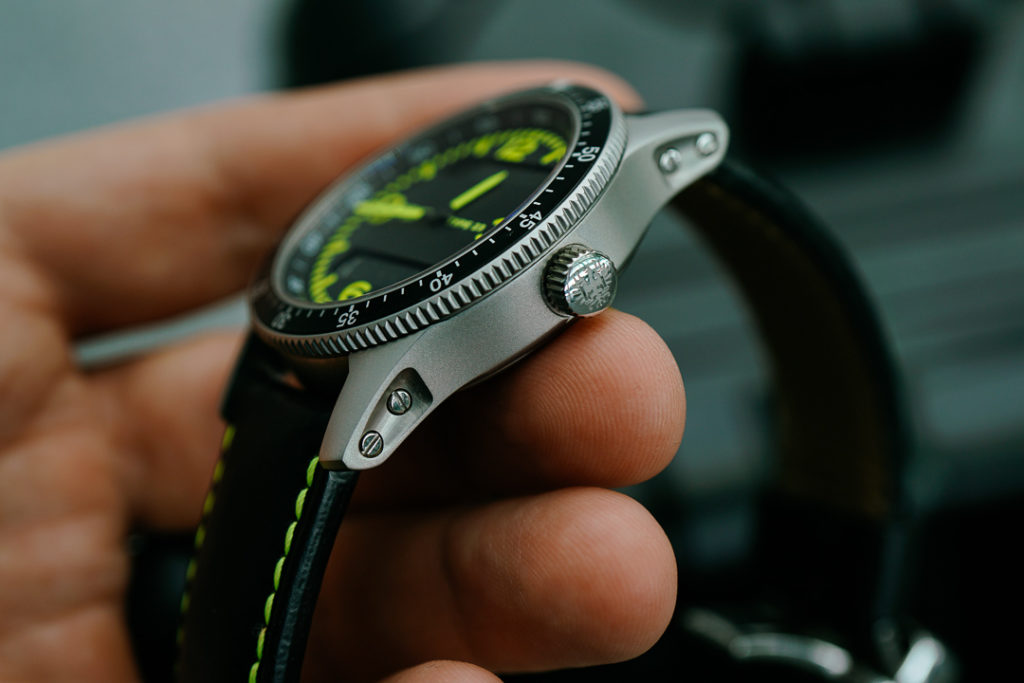 This particular Type 23 is built around a relatively stock ETA 988 movement with an independently adjustable hour hand, alarm, GMT, count-up/down timer, split-second chronograph, and perpetual calendar – all functions that can be engaged via the crown with a push, a pull, or a quick twist. These are also all characteristics that you’d find on 988-equipped ani-digi watches like the discontinued Victorinox Chrono Classic XLS or the Breitling Aerospace EVO, though it does lack the backlight and minute repeating functions found on the latter. One advantage that the Type 23 has over both, though, is that the oversized coin-edged crown is extremely tactile and very easy to grip, making interactions with this watch much more fluid and natural, compared to engaging with the Aerospace’s notoriously fiddly crown. The 988 is also accurate to within one second per day, putting it well within the timekeeping demands of the French Air Force. 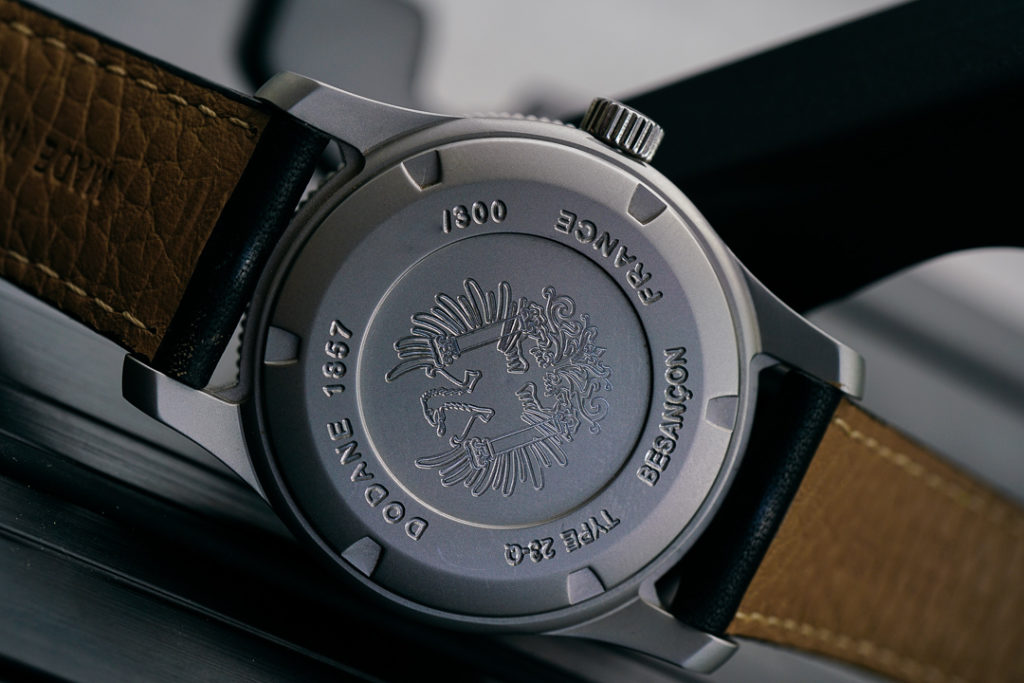 Like its mechanical alternatives, the Type 23 case exhibits a very cool “industrial chic” aesthetic, despite being intentionally designed as an instrument. At 42.5mm, the case wears somewhat broadly (it was meant to be worn over a flight suit, after all), but its sculpted lugs and relatively sleek profile evokes the silhouettes of the fighter jets it was designed to inhabit. This particular variant has been fully bead-blasted and is equipped with a bi-directional rotating countdown bezel, but a wide variety of other bezel types, treatments, and finishes, are all available at the buyer’s request. The BNL variant is fitted to a very high-quality heavy calf strap with matching yellow “BNL” stitching, which also comes alive under a UV light. It’s worth noting that only a single set of screwed bars is used to secure the strap ends to the lugs, despite there being four screws at each end of the case — likely just an aesthetic choice by designer Julien Thiebaud, but a cool one, nonetheless, which persists throughout the Type 23 collection. 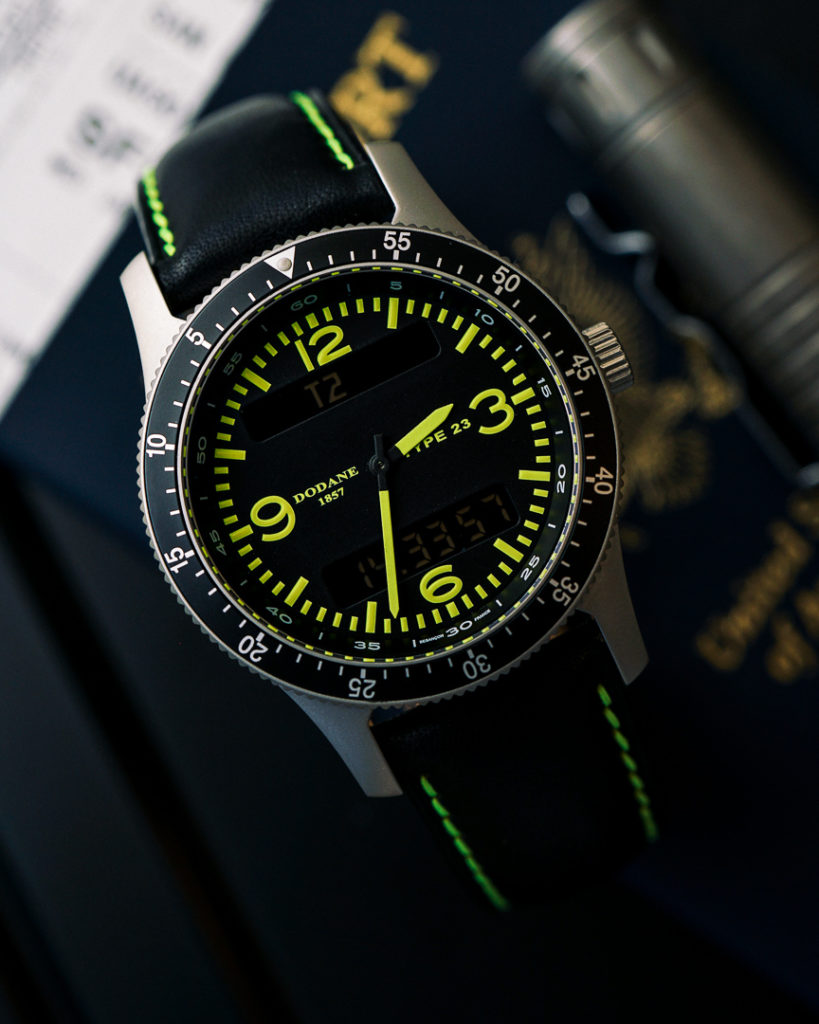 It’s a shame that the ani-digi is turning into something of an endangered species, particularly because this genus of watch fits my lifestyle perfectly. It travels extremely well, has enough functionality and water resistance to keep up when I get to wherever I’m going, and is certainly to be running throughout the entirety of the adventure – regardless of whether it’s on my wrist or awaiting deployment from my carry-on. And given its heritage, functionality, and finishing, I’d also argue that the Dodane Type 23 Quartz BNL is very competitively priced, starting at 1500 Euros (more than half the cost of its closest Swiss competitor still in production). You can learn more about it at dodane1857.com, or inquire at Dodane’s exclusive retailer, Page&Cooper. 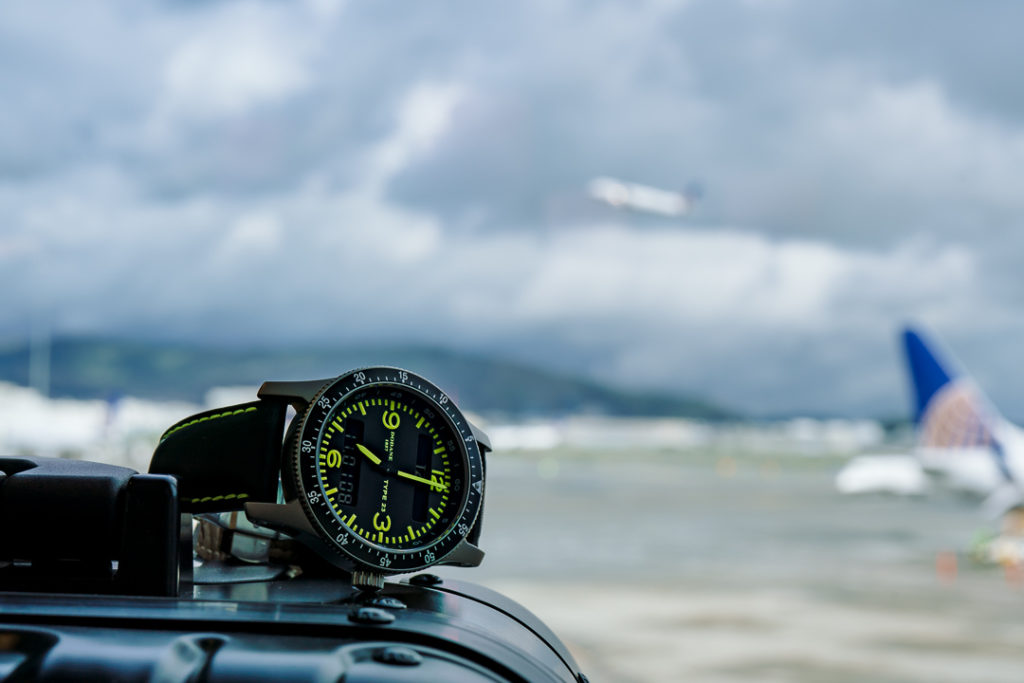