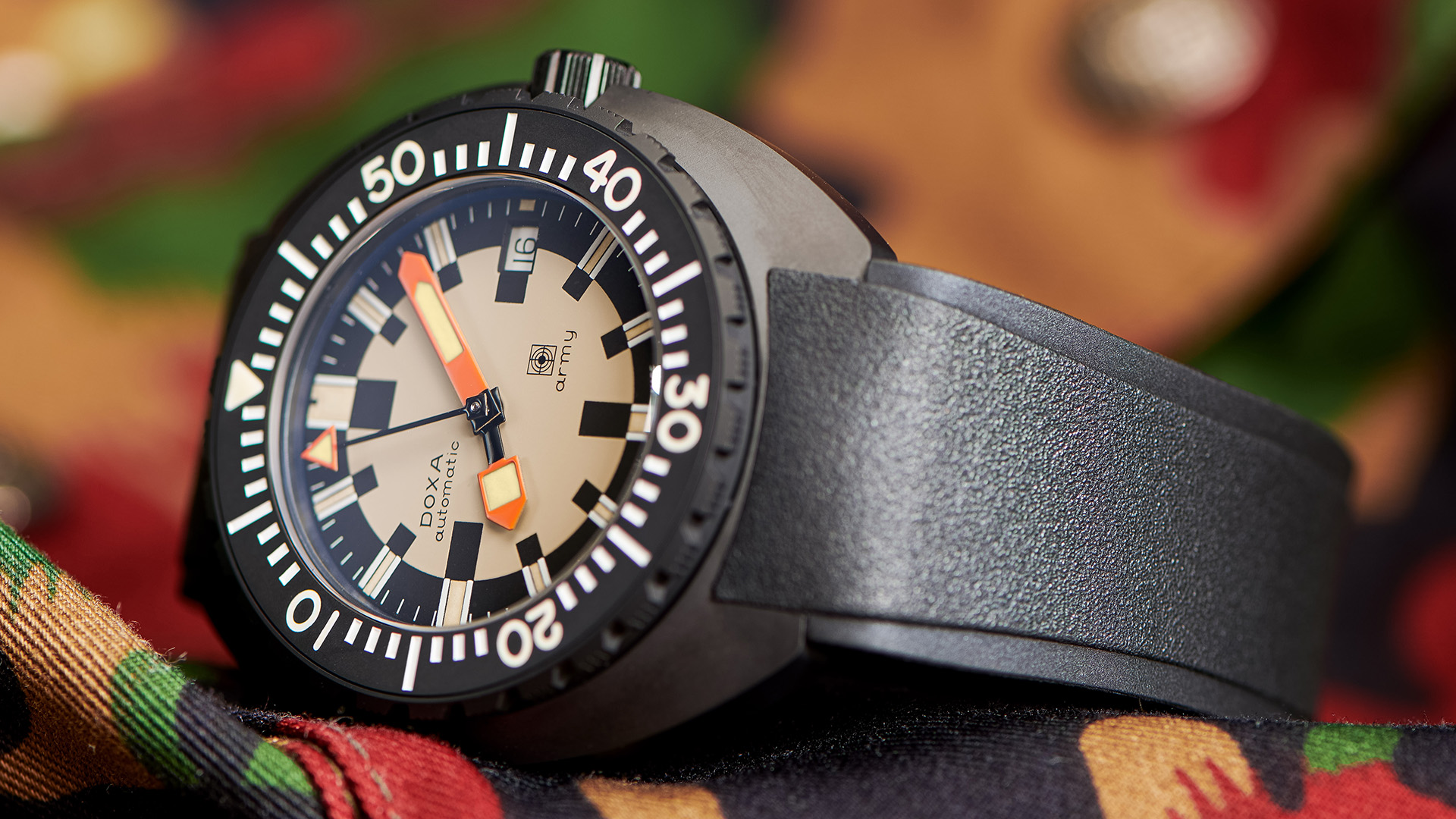 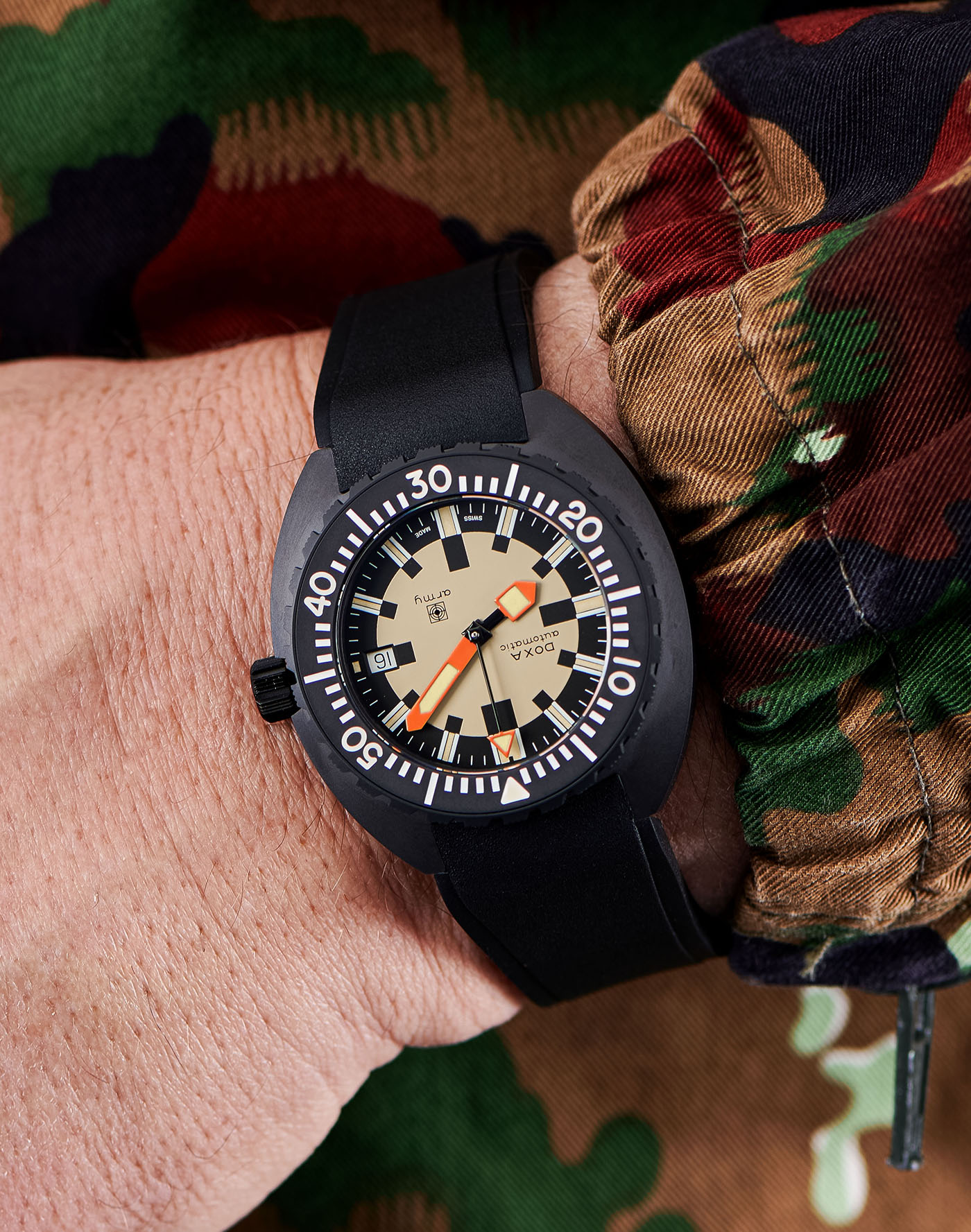 Although its legacy among enthusiasts is inextricably linked to orange-dial diver designs, decompression bezels, Jacques Cousteau, and the novels of Clive Cussler, Doxa also boasts a long history of military watches as well. One of the most distinctive and famous of these military-issued Doxa designs is the simply named Doxa Army, based on the brand’s cornerstone Sub 300T platform and issued to an elite combat diver unit within the Swiss Army in 1969. The Army quickly became a legend among military watch collectors, both for its uniquely graphic twist on the Sub 300T design and its distinction as one of the very first black-coated watch cases. It’s a design that has spawned notable homages in the intervening years, particularly 2021’s Synchron Military, but since the ‘70s the Doxa Army nameplate has languished quietly in the brand’s archives awaiting a chance to re-emerge. Thanks to a new partnership with retailer Watches of Switzerland, Doxa has returned to the Army line with a sharp new reimagining that brings cutting-edge new materials to the late ‘60s-inspired platform. The new limited edition Doxa Army Watches of Switzerland Edition presents one of the most striking layouts ever to grace the brand’s catalog, paired to refined modern build quality. 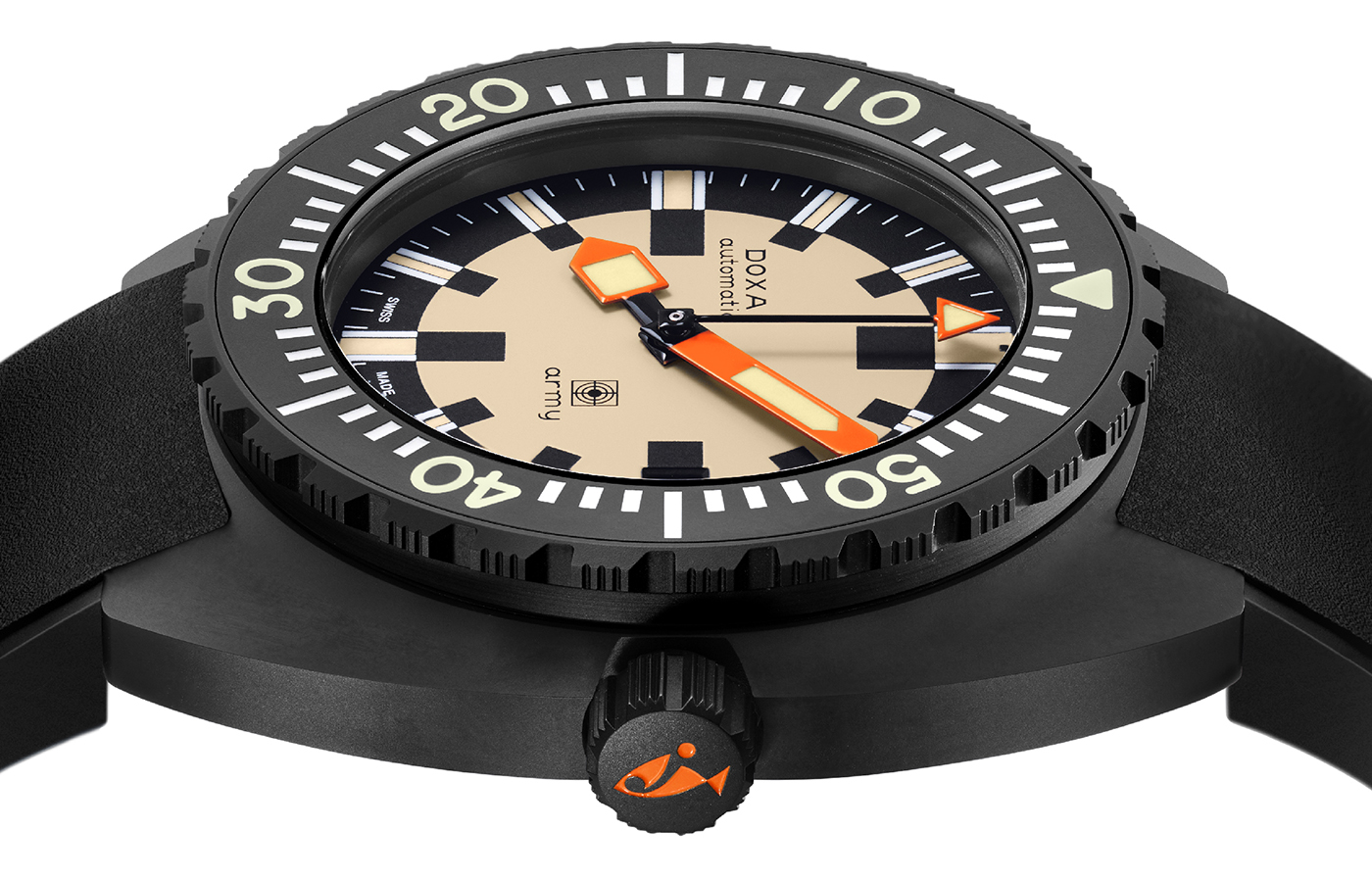 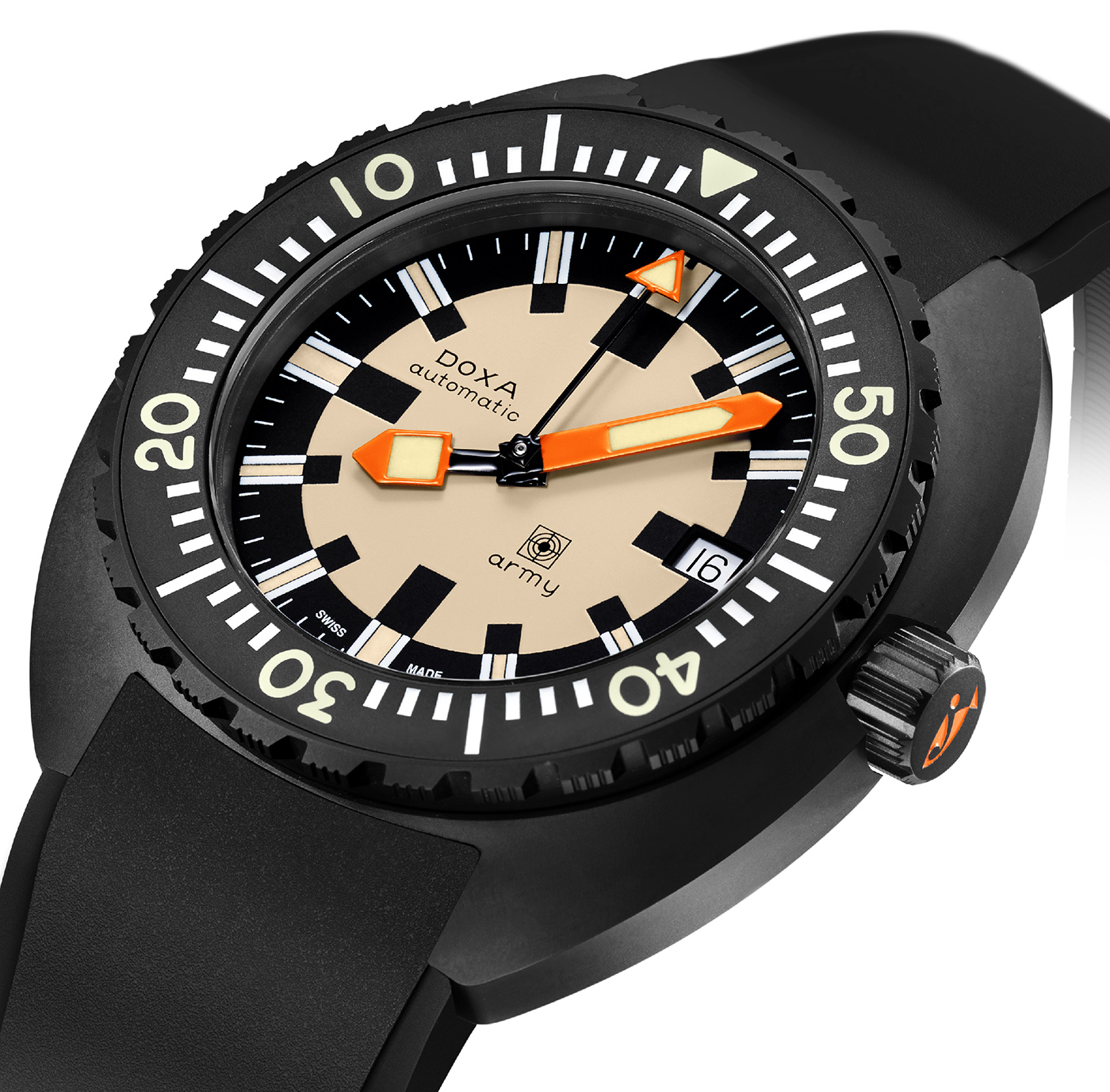 As with its ‘60s predecessor, the Doxa Army Watches of Switzerland Edition’s dial is its most immediately spellbinding asset. As much an exercise in Pop Art graphic design as it is a piece of government-issued military hardware, this stark dial design is as unique and intriguing in images now as it was on its 1969 debut. It’s a uniquely blocky, vibrant approach to hyper-legibility, extending each of the printed hour indices well past the outer minutes ring and into the central dial with the use of squared-off negative spaces. The high-visibility orange handset also takes on broad, squarish forms, pairing wide easy-to-spot shapes with generous and distinctively shaped fauxtina lume plots for each hand. When paired with the broad lume applications for each of the hour indices, these hands should make the Army Watches of Switzerland Edition exceptionally easy to read at a glance in low light. Like the original model, the central section of the dial adds a splash of personality to the proceedings in images by abandoning a pure white surface in favor of a military-inflected khaki tone. Doxa hallmarks like the 10 o’clock and 4 o’clock placement of dial text help to visually tie this unique layout into the broader Doxa family, and maintain the same charismatic ‘60s-style typefaces as the original Doxa Army. The 3 o’clock date window may prove a point of contention among enthusiasts, however, as it notably disrupts the visual flow of the graphic dial layout. 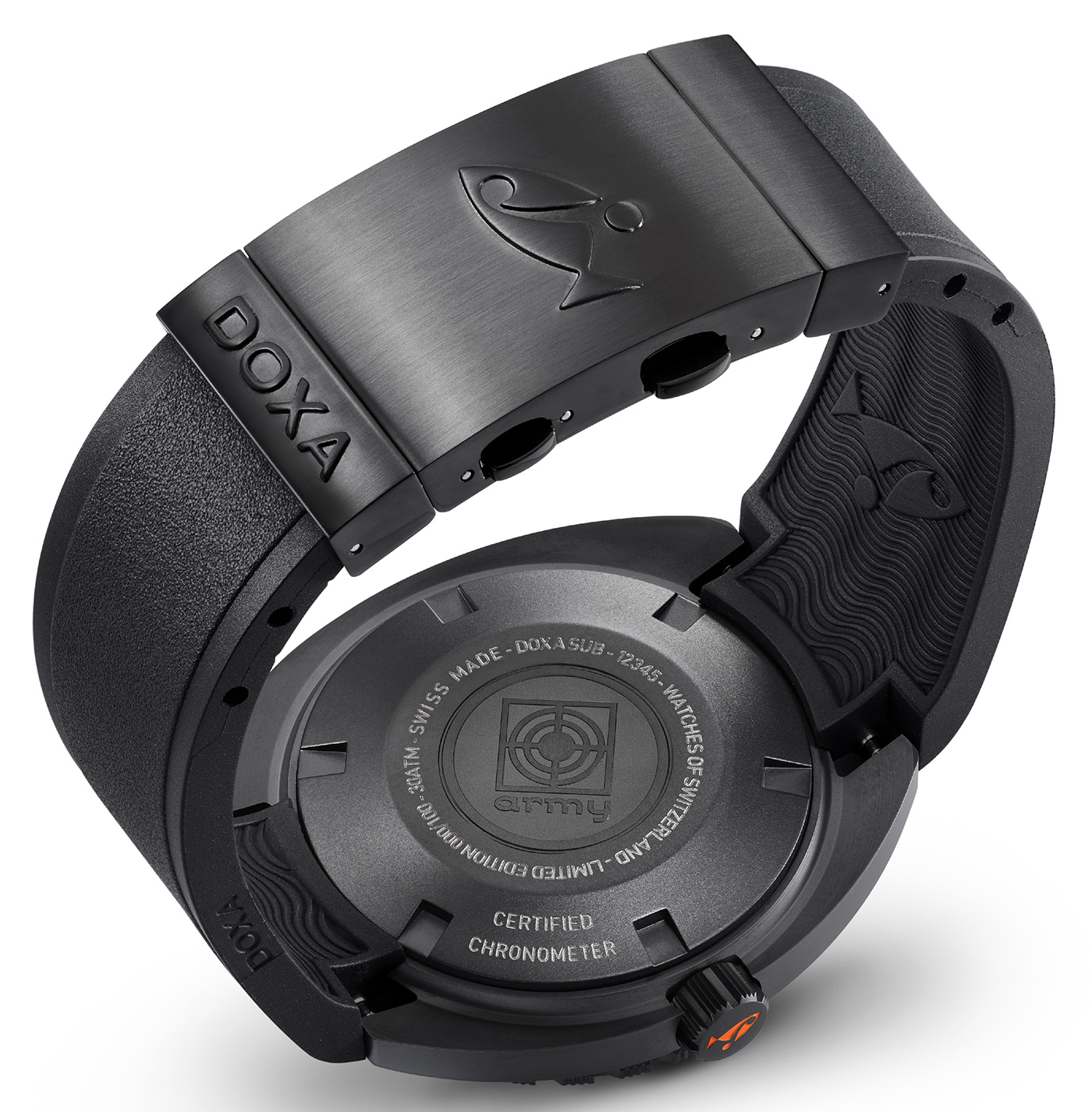 Doxa turns to the familiar Sellita SW200-1 automatic movement to power the Army Watches of Switzerland Edition. The SW200-1 has been a staple of the watch industry for many years, but Doxa adds COSC certified chronometer accuracy to this platform for a more premium feel. However, outside of the accuracy, the SW200-1’s performance is growing notably long in the tooth, with a 38 hour power reserve at a 28,800 bph beat rate. Doxa pairs the Army Watches of Switzerland Edition with two distinct included straps. To complete the blacked-out colorway, the brand includes a matte black strap in durable FKM rubber. For a bolder and more overtly military look, Doxa also adds a woodland camo-patterned nylon NATO strap in a mottled blend of olive green, tan, brown, white, and black. 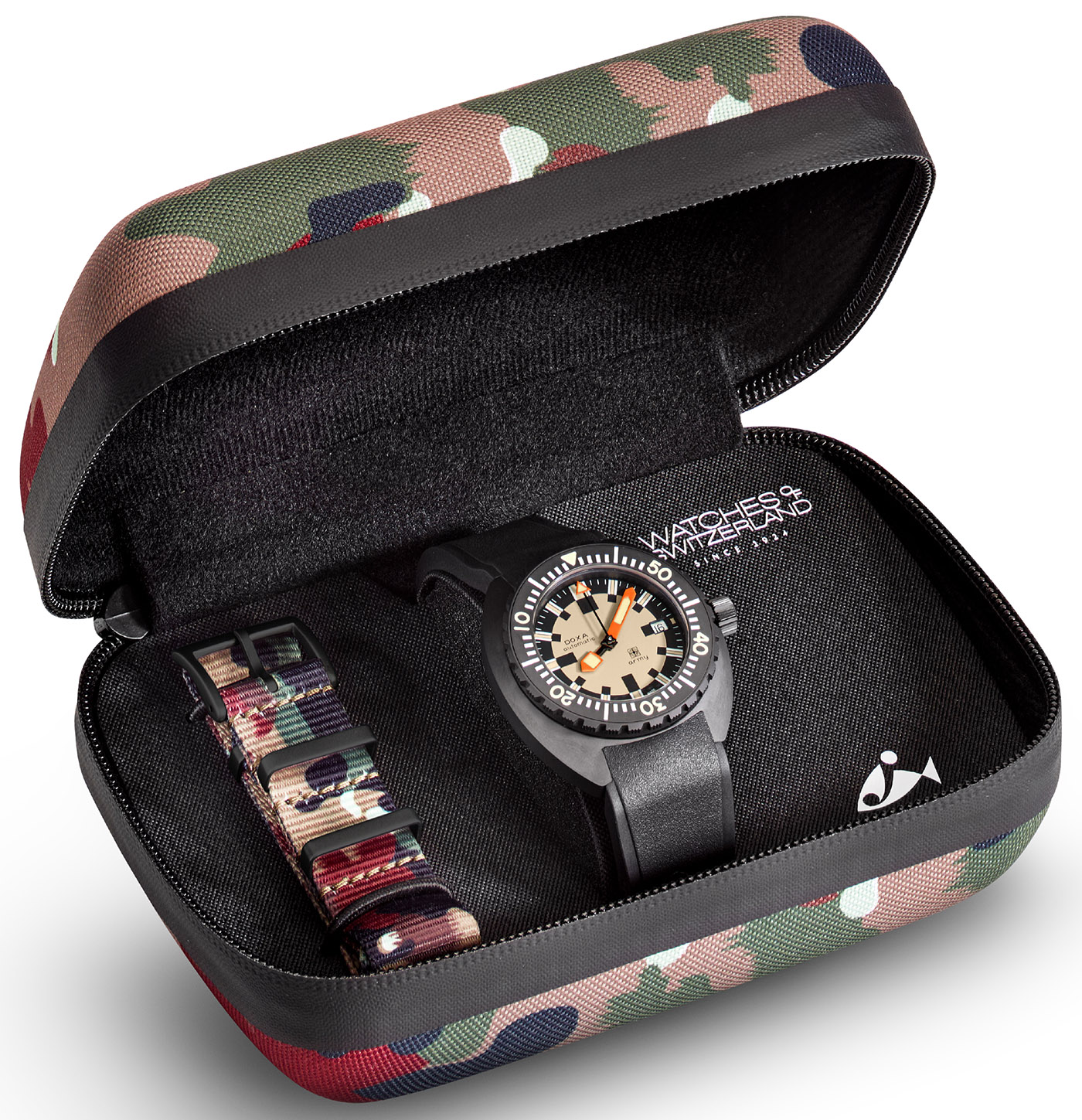