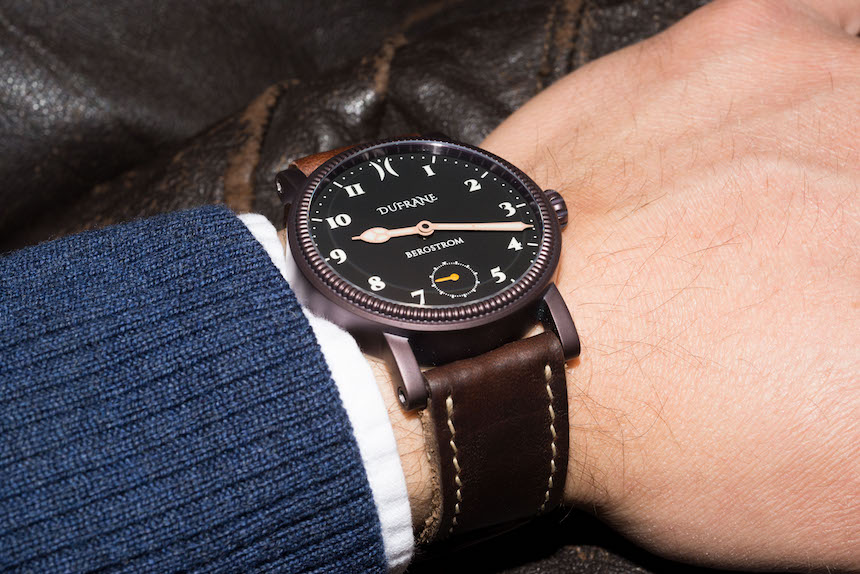 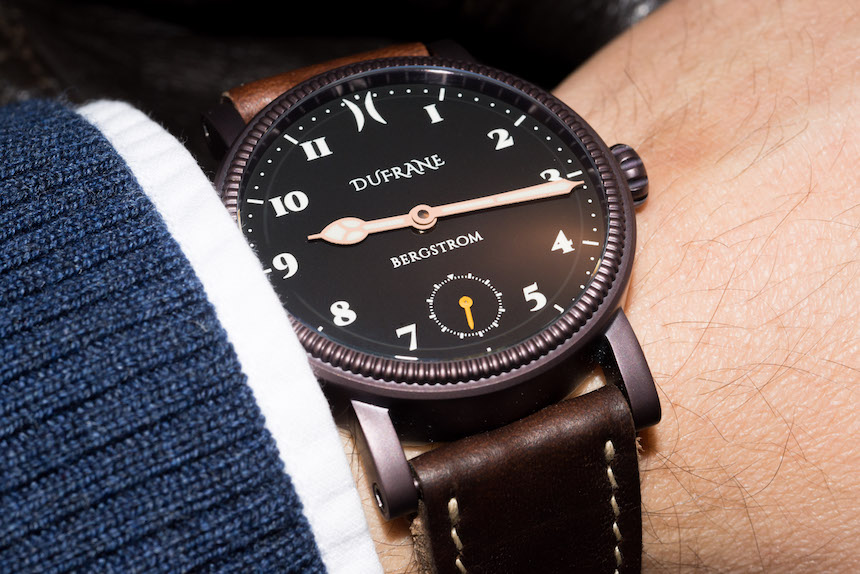 I recently spent some time with the DuFrane Bergstrom pilot watch, and if you haven’t heard of DuFrane before it’s because they are a new entry to the American-made micro brand space. Aiming for classic pilot watch looks and retaining a proud American identity, I think DuFrane has done an impressive job (especially considering how new they are) at making a watch that stands out in the sub-$1,000 category. I’m going to use this review as a chance to talk about the Bergstrom Matte Bronze watch and also discuss the brand that created it. 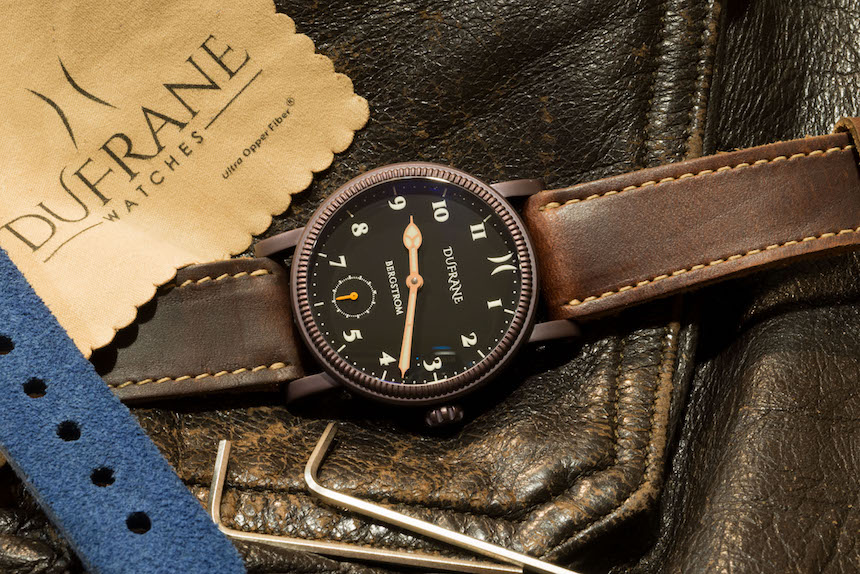 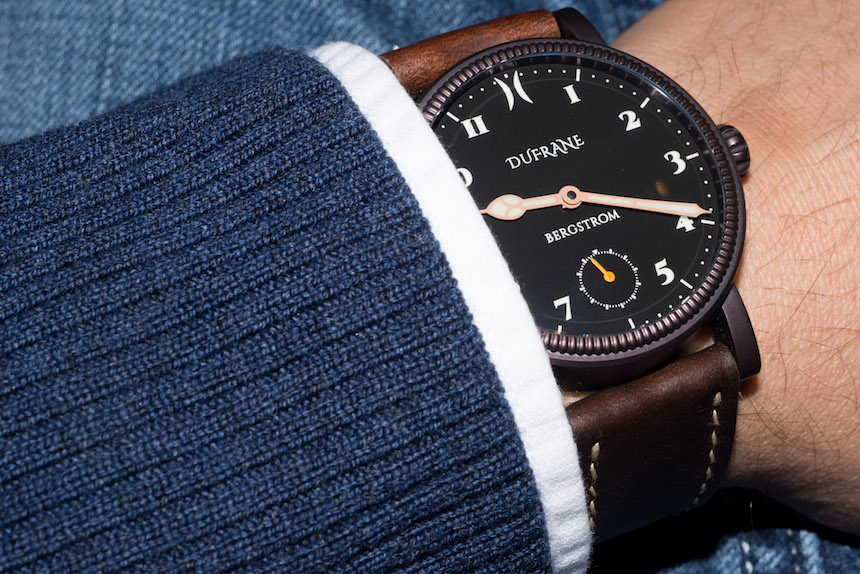 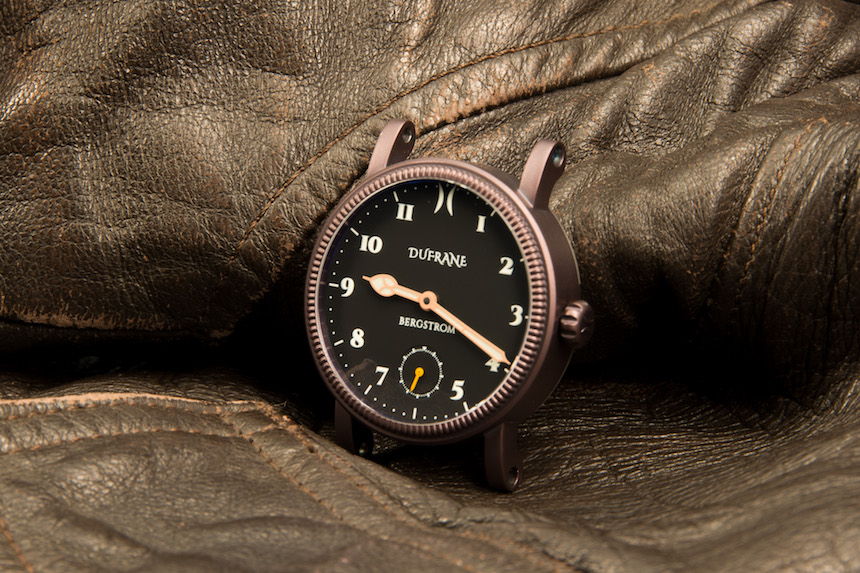 The Bergstrom is an American made watch with a Swiss ETA movement. The case is made from 316L stainless steel, has a fixed coin edged bezel, and a custom engraved exhibition case back. It measures in at 41.5mm and a little larger when you factor in the crown. The watch is made by Wiegand Custom Watches out of Ohio. They have been producing watches for close to twenty years. If that name sounds familiar it may be because they also run Lum-Tec. Lum-Tec offers a variety of watches with some resembling the Bergstrom such as their Combat B line of watches. 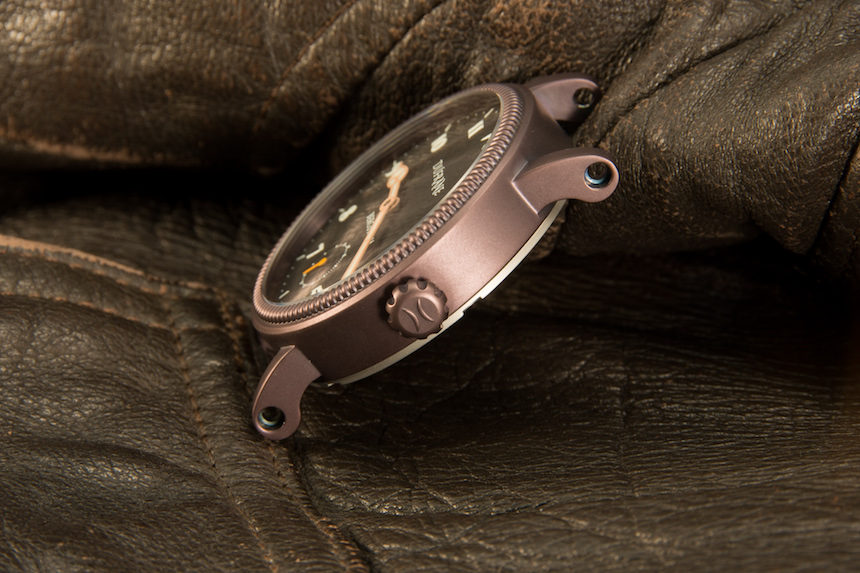 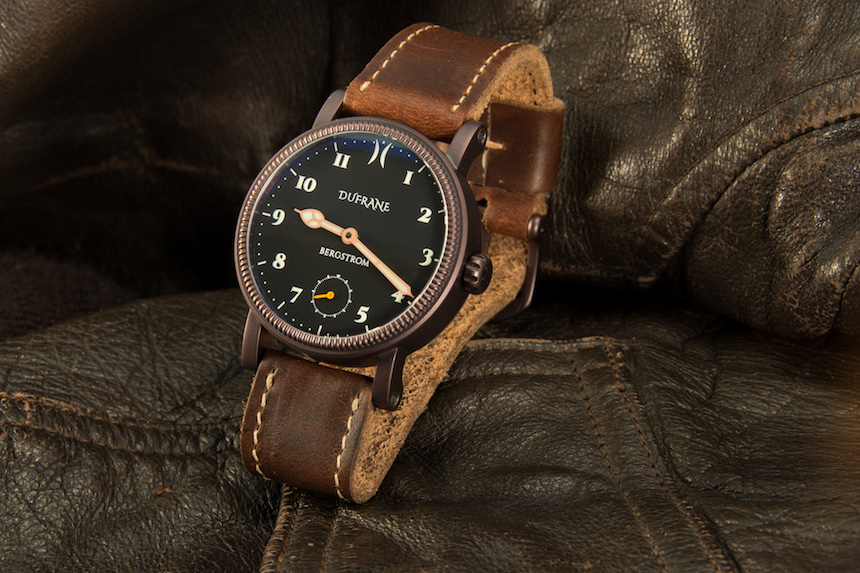 DuFrane offers either a stainless steel or matte bronze case. The dial is offered in a standard or horizon configuration, the difference being the small seconds register. The seconds register on the horizon dial is reminiscent of an altitude indicator one might see in the cockpit of an airplane. 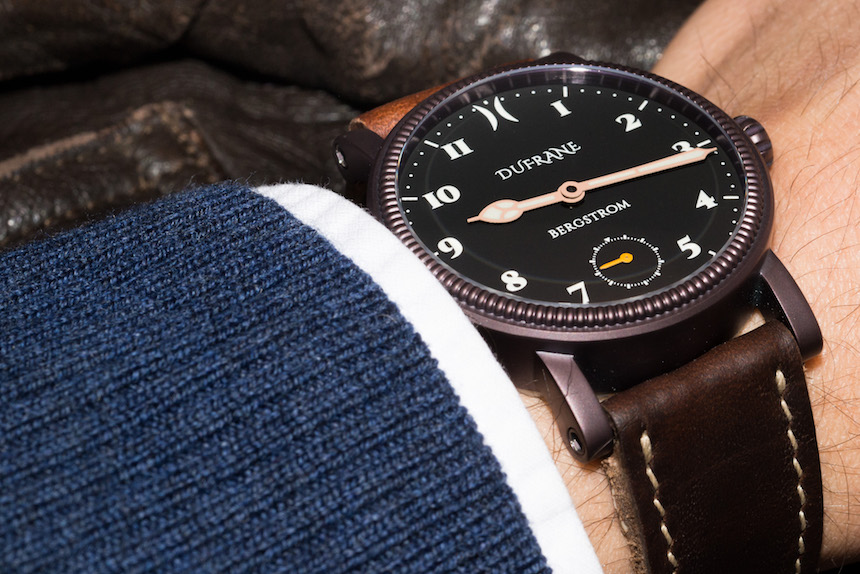 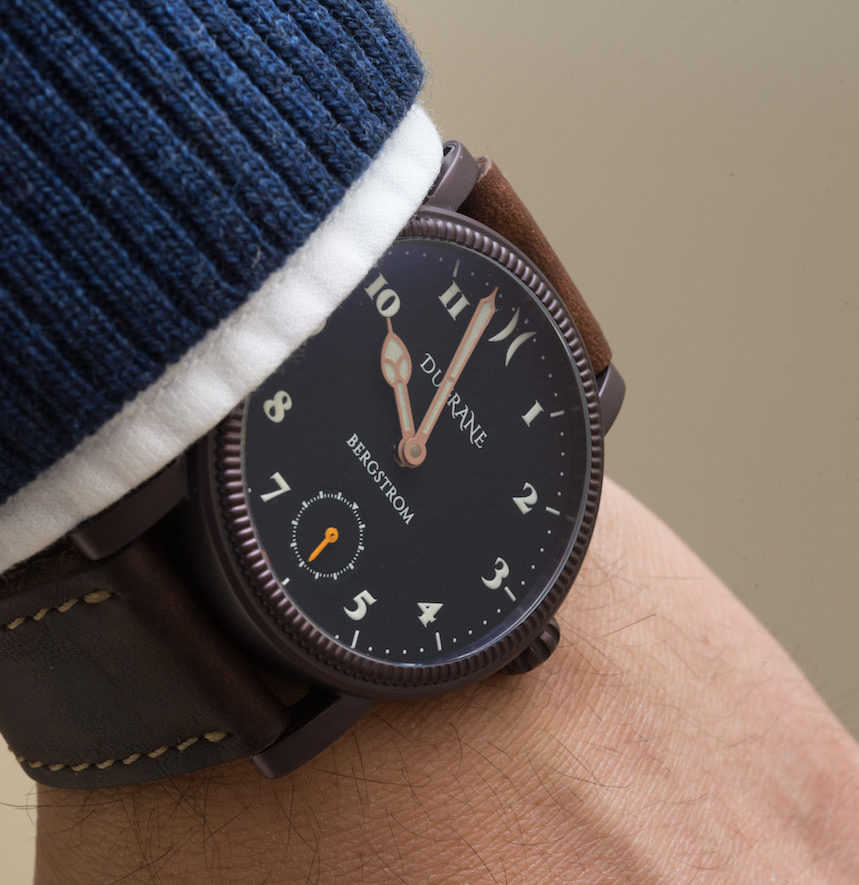 The Bergstrom has a black matte dial and the large, legible Arabic numeral hour markers are one of my favorite aspects of the dial. I also noticed and appreciated that the “poire squelette” hands add to the vintage feel and was quite possibly inspired by those seen on pilot watches from the ’30s and ’40s produced by brands such as Longines, Zenith, or Lemania. That being said, one of the things that I wasn’t too happy with was that the C3 Super-LumiNova on the hands and on the numerals surrounding the dial didn’t appear to be the same shade unless the lume was charged. It’s not something that really bothered me while wearing the watch, but it is something I thought was worth pointing out. 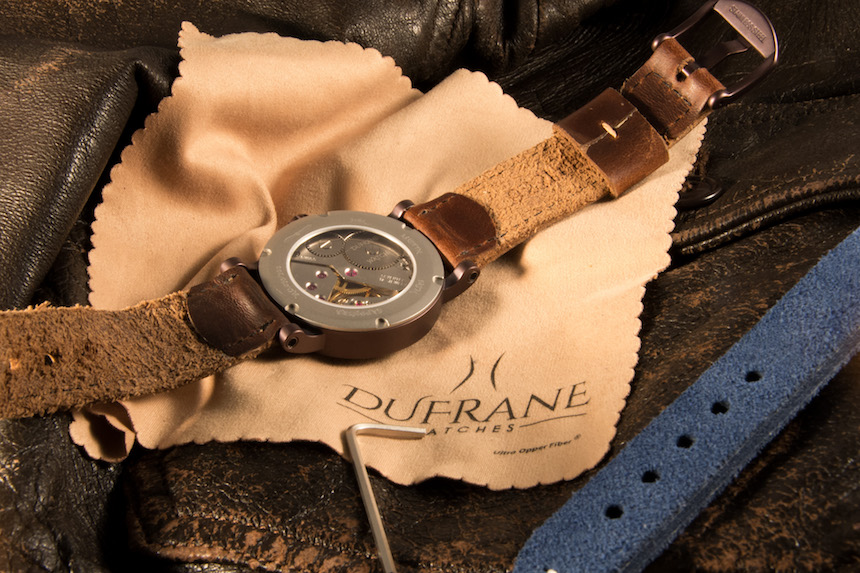 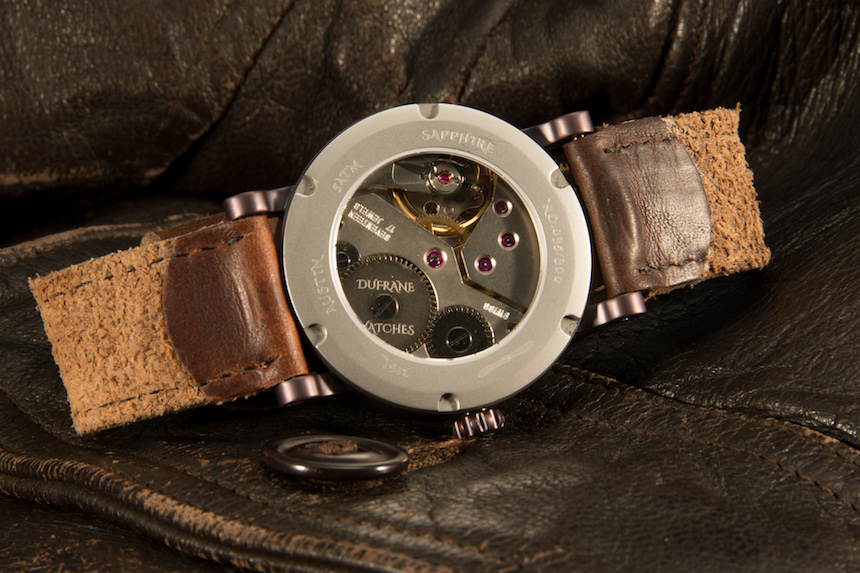 The Bergstrom uses an ETA 6498-1 movement. The 6498-1 is the younger brother to the ETA 6498 pocket watch movement that has been around since the 1950s. The 6498-1 made it’s first appearance in 1967 as a manual wind, non-hacking movement with a 46 hour power reserve. One of the signs of the movement’s pocket watch lineage is the placement of the seconds hand at the 6 o’clock position – a configuration that can be seen in watches such as the Highline Aviator series by the aforementioned Montana Watch Company and the 150-P by RGM. 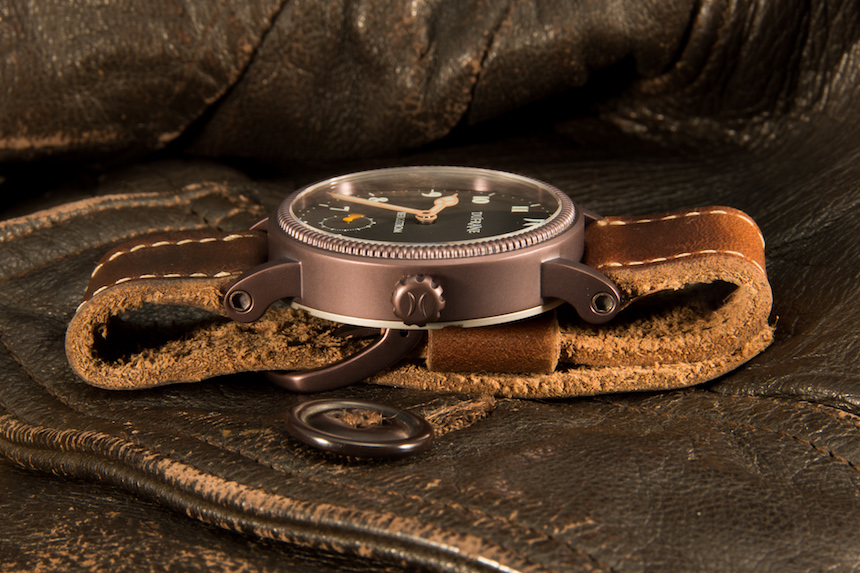 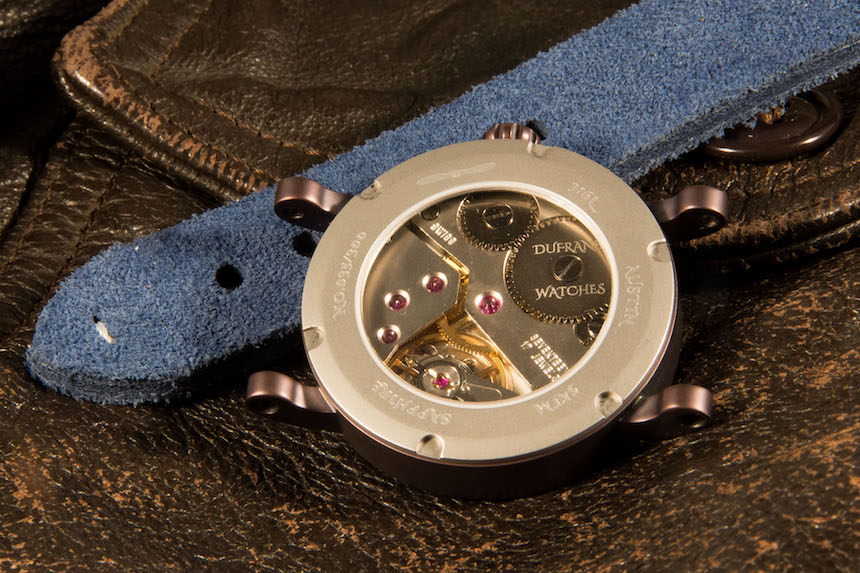 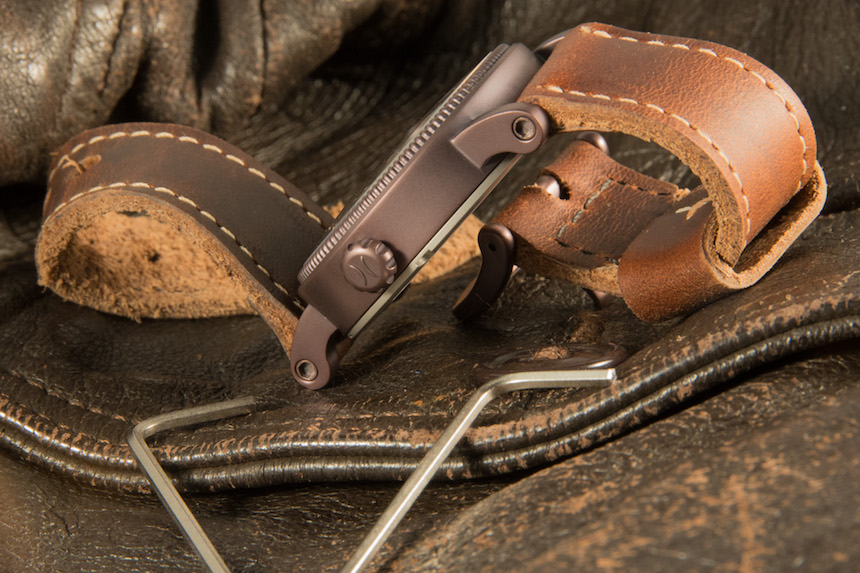 As a manual wind watch, I got to interact with the Bergstrom in a way that I don’t usually get to with watches in my collection. I misplaced my only manual watch a few months ago while on vacation and forgot how wearing a manual watch becomes a part of who you are, and I definitely lament the fact that they are not frequently used anymore and have become somewhat “niche.” In fact, I’m so used to wearing automatics on a daily basis that on occasion I would look at my wrist and notice the time was off. I have become accustomed to setting my watches and wearing them without worrying about adjusting the time, unless the watch has been off my wrist for a while. According to DuFrane founder Steven Lee, some people have complained that their watch stopped working. He kindly reminds them the Bergstrom is a manual wind watch and needs to be wound on a daily basis. In order to keep a vintage feel to his watches, Steven plans on using a manual movement going forward. Personally, I think the manual winding movement adds to the watch’s charm. 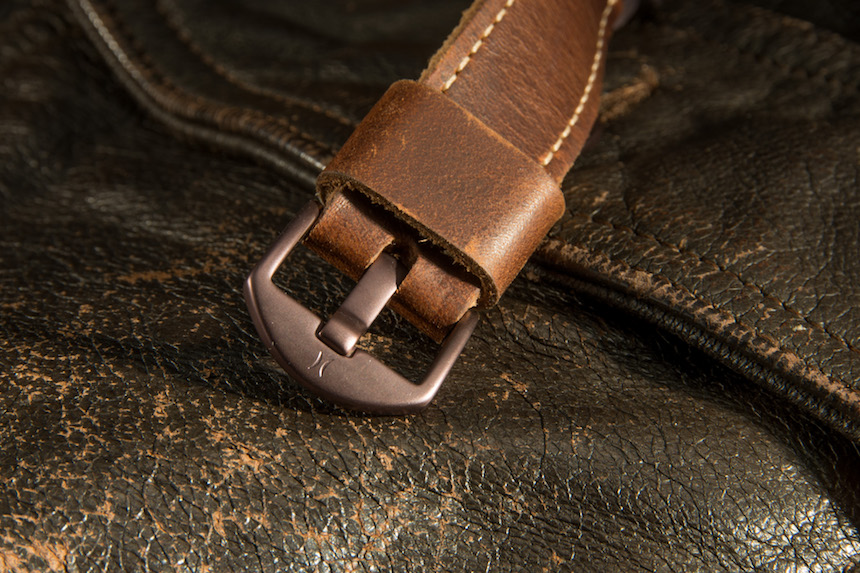 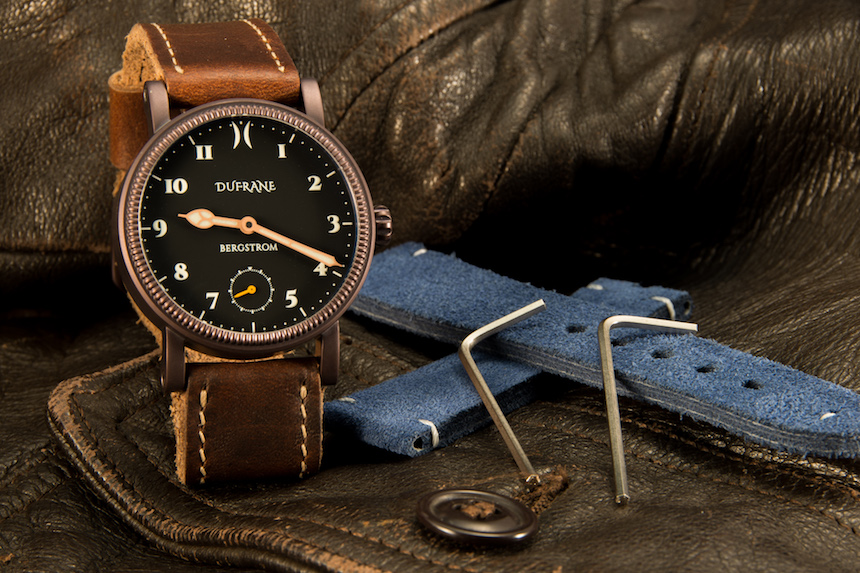 The Bergstrom is fitted with a 22mm brown custom leather strap and comes with an additional blue suede strap. I really appreciate both straps and the thoughtfulness that went into their selection. The screw bars securing the leather strap to the watch lugs require two Allen wrenches in order to remove the strap. The process is quite cumbersome, though I really like the brown strap more than the blue suede one and don’t change it very often. Still, this is something worth considering. 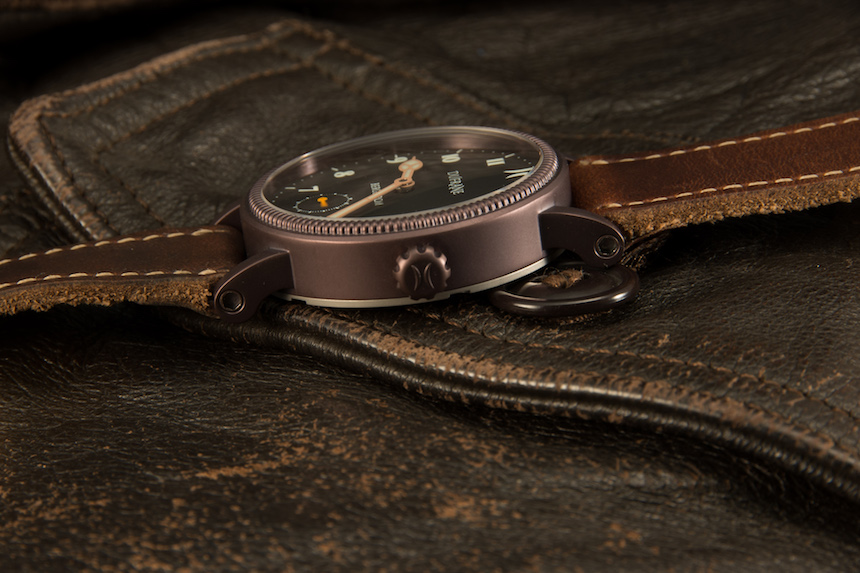 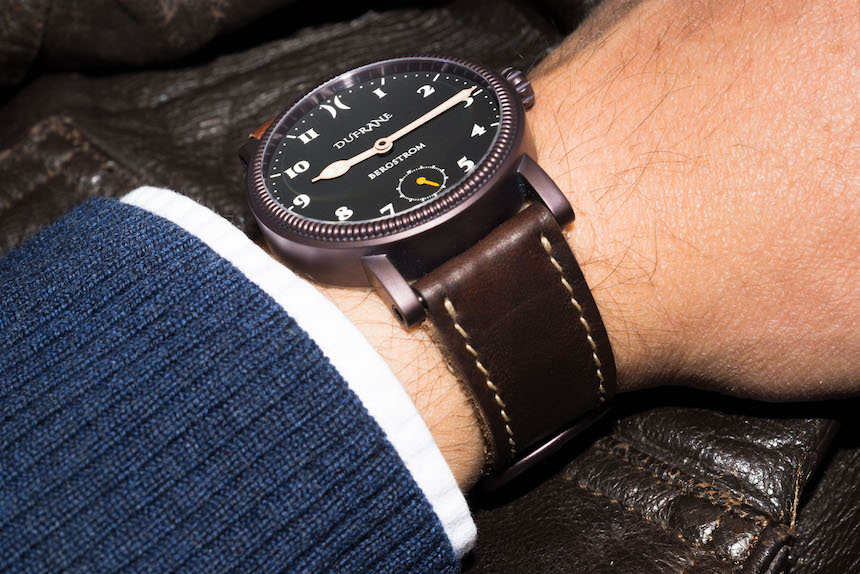 As you can see in the photos, the non-moving coin edged bezel suits the watch and helps to add to the watch’s vintage appeal. Looking at the watch from a side profile, one will notice the crown is signed with the DuFrane logo. It’s a 3mm crown bringing the case size up to 44.5mm. I don’t usually like the way larger watches feel on my wrist, but the curved lugs and the leather strap help the Bergstrom feel smaller than it actually is – something that my wrist appreciated, too. 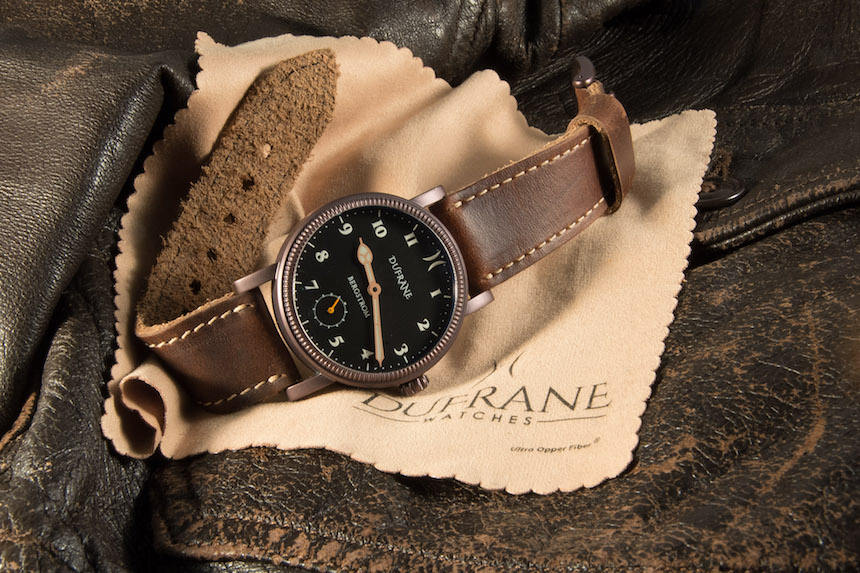 Now I’d like to discuss the brand a little bit, since it’s new and this review is very likely to be an introduction to DuFrane for many of you. Steven Lee, Founder of DuFrane Watches just recently sold his Porsche 993 in an effort to help build DuFrane Watches. The sale was bittersweet, but if the brand takes off, the sale can be chalked up to the price of starting a new watch brand. 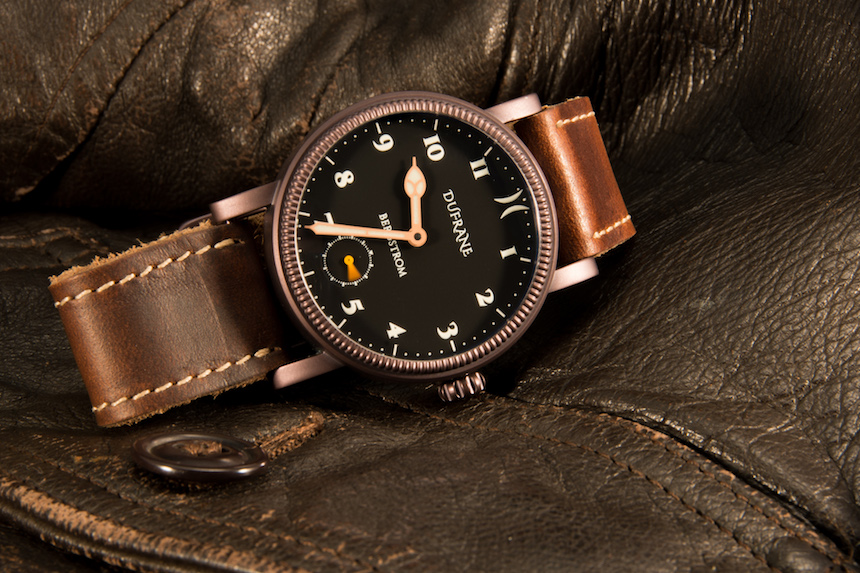 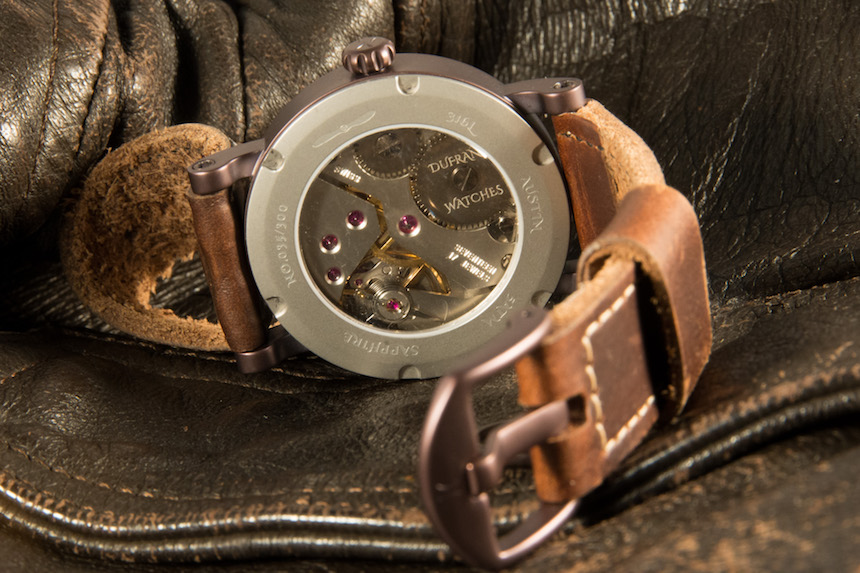 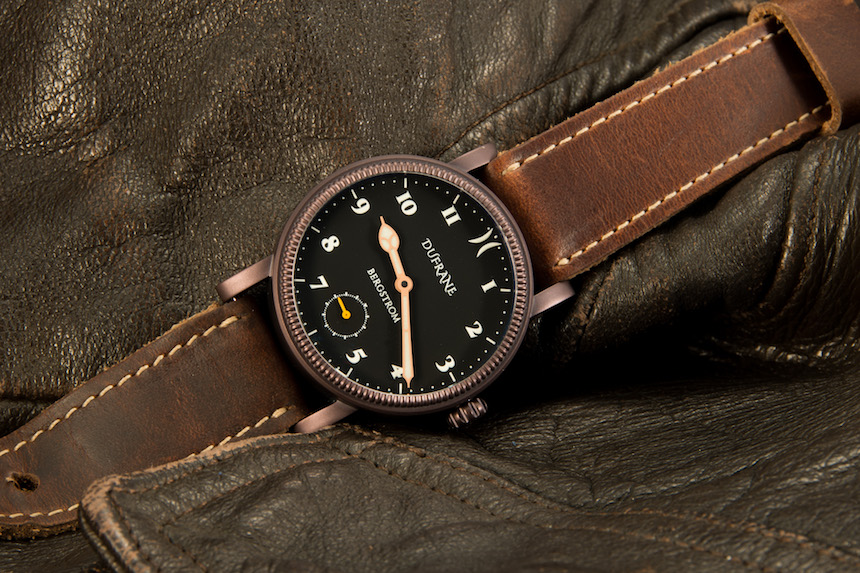 If you are familiar with the Austin area, there is no doubt that you are also familiar with the name Bergstrom. From the decommissioned Air Force Base to the Austin-Bergstrom International Airport, the name Bergstrom is an Austin fixture. For those of you who aren’t, Captain John Bergstrom was Austin’s first WWII casualty. Shortly after Captain Bergstrom’s death, as a way to honor him, Lyndon B. Johnson, then a US Representative from Texas, fought to rename the Air Force base after Captain Bergstrom. On March 3, 1943 it became a reality and the base was officially renamed the Bergstrom Army Airfield. As a way to pay homage to Austin, something he plans on doing with all future releases, Steven Lee named his first line of watches after Bergstrom. 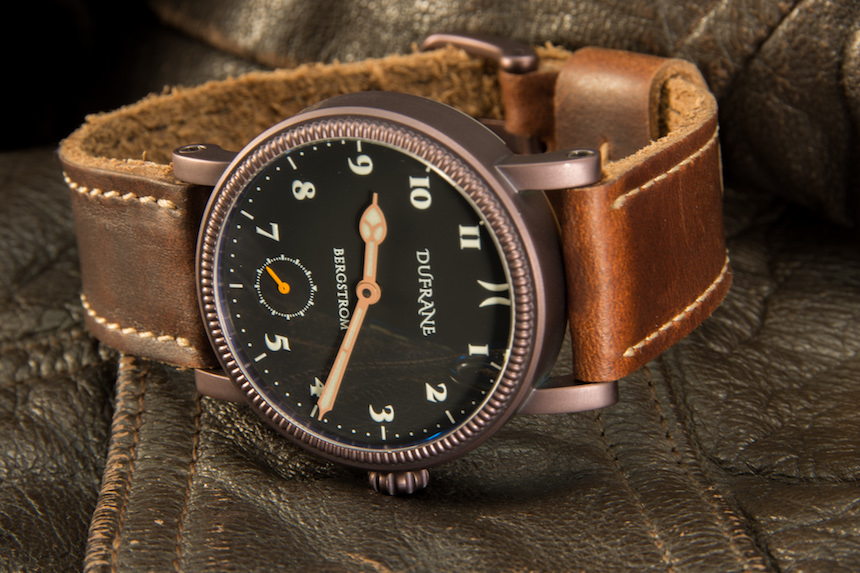 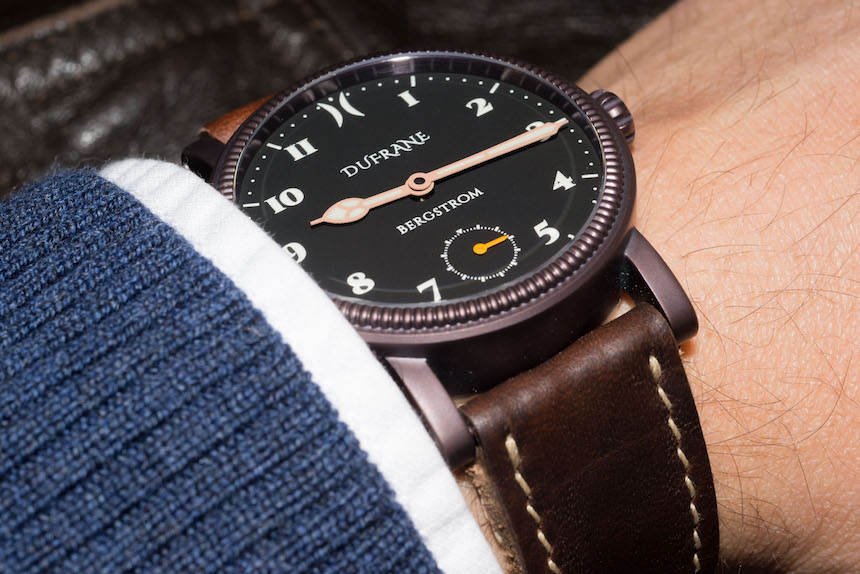 DuFrane Watches makes a solid appearance with the debut of their first watch. If you are in the market for a pilot watch with a vintage feel, take a look at the Bergstrom. Depending on the options, you can pick one up from their website for $875-$950 with this model at the upper price limit. dufranewatches.com