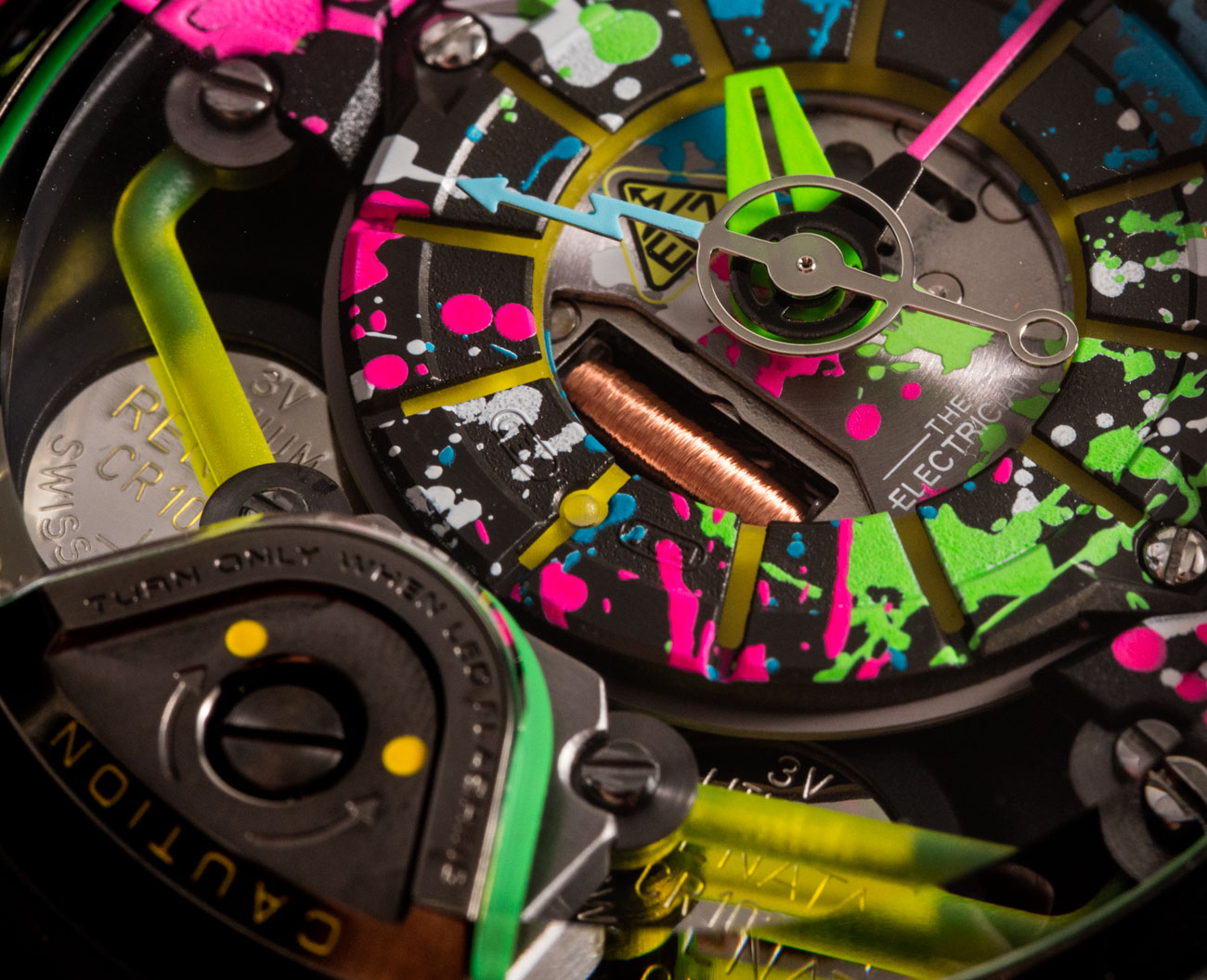 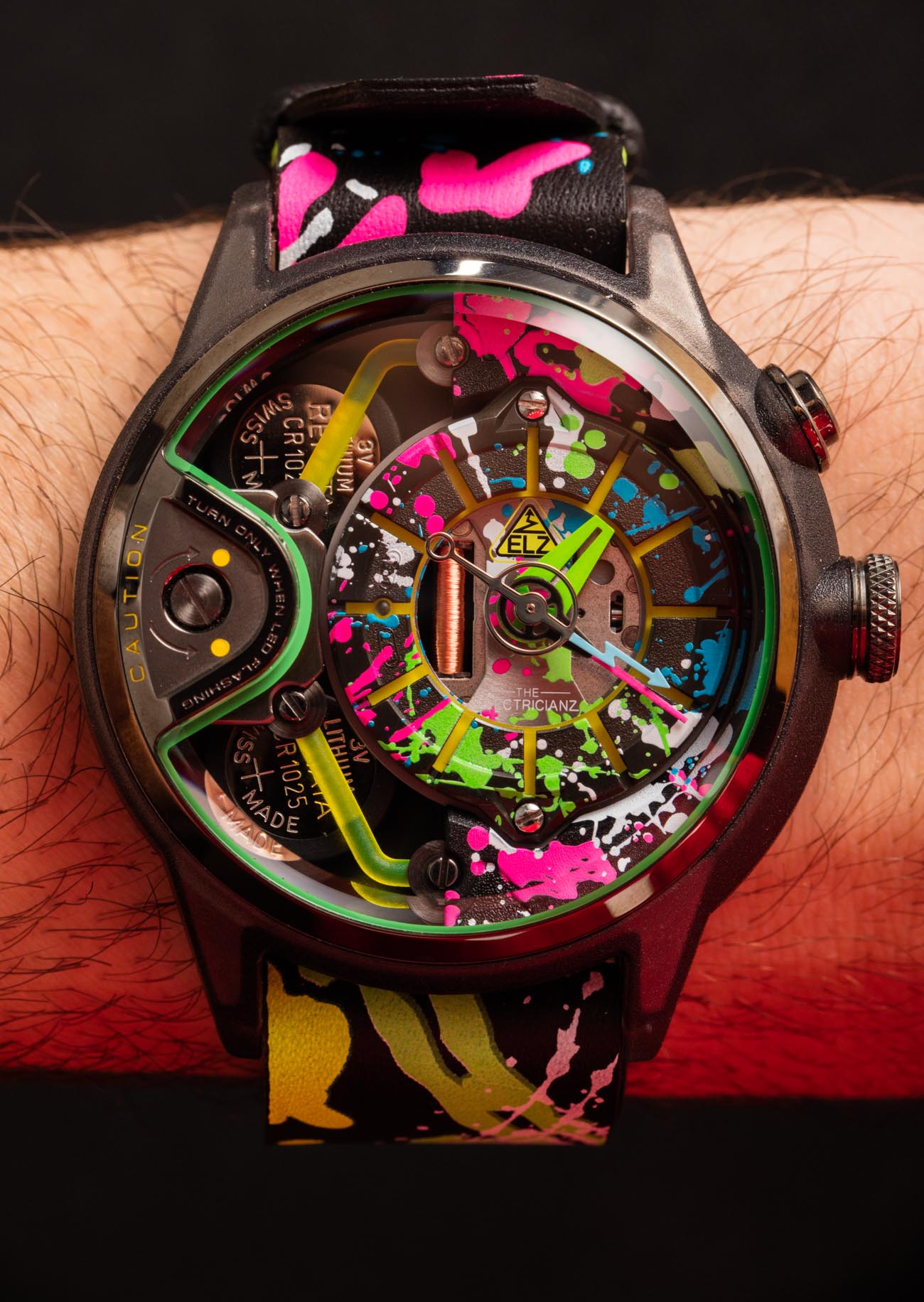 ELECTRICIANZ (ELZ, for short) is a Switzerland-based watch brand from the same people who brought us SevenFriday. These are the same people behind the wristwatch design creative agency known as Studio Divine. Today I am going to share with you the interesting and affordable Neon Z “Graffiti” watch that easily sums up why you will either love or hate this brand. What ELECTRICIANZ and SevenFriday have in common is the fact they are designed in Switzerland, while produced entirely in Asia.

There is nothing wrong with that, but it is ironic because it is the marginalized reverse of what most Swiss watch brands are — which is assembled in Switzerland but with many parts that come from Asia (and not particularly openly). ELECTRICIANZ watches are all quartz and, like many things from Studio Divine, it might be a bit ahead of its time. 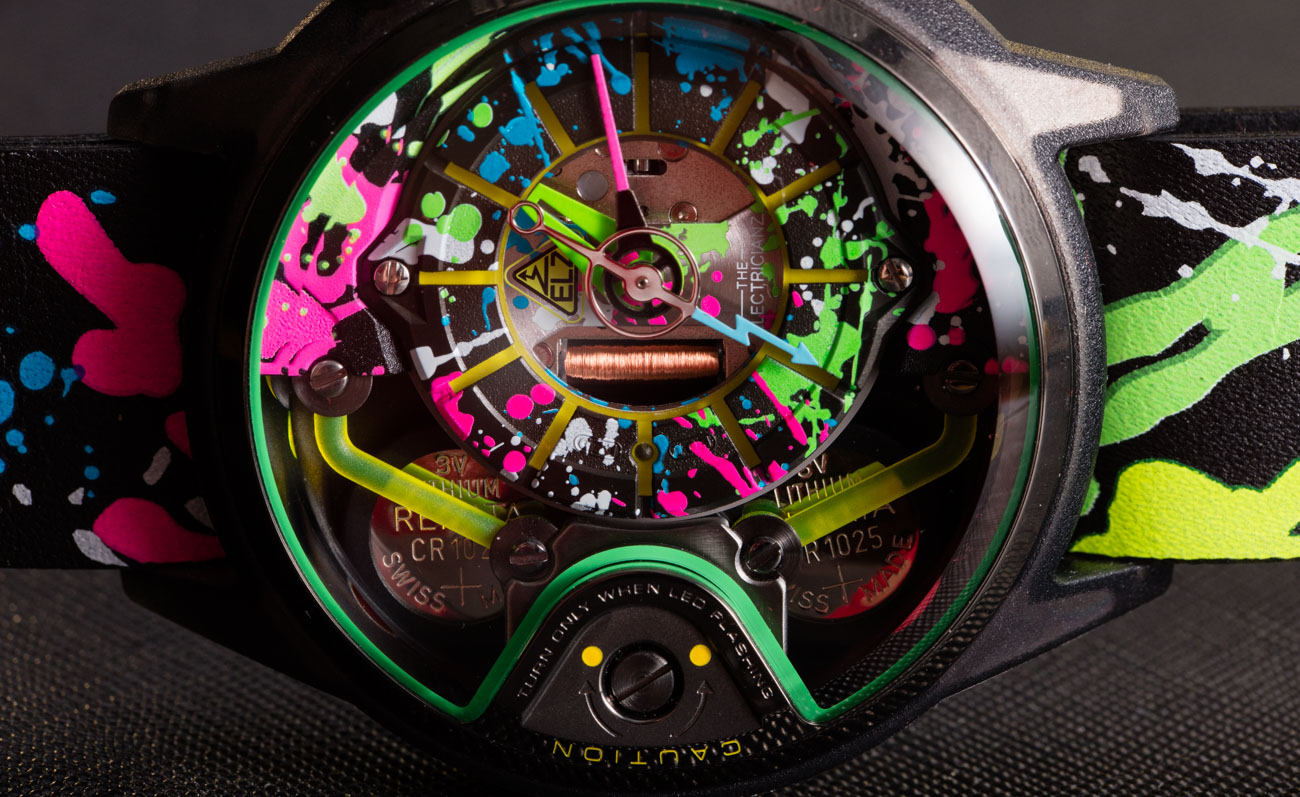 When “the” ELECTRICIANZ first debuted a few years ago, I said that it was part of the beginning of what I anticipate will be increasing collector interest in quartz watches. “Dumb” quartz watches, if you will, that are not connected and, in most instances, have no software. What the ELECTRICIANZ understands is that this trend is probably coming and that people like loud, showy things on their wrists. They also understand that, as with mechanical watches, it can pay to show off parts of the mechanism.

In this regard, the NEON Z, like most ELECTRICIANZ watches, has some visible parts of the movement… sort of. Yes, you can view batteries and conduits through the left-half of the dial. No, you can’t really see the dial yet. The point is that the ELECTRICIANZ understands the potential and that an attractive board-based electronic watch movement has serious visual appeal. ELECTRICIANZ understands this, in principle, and is doing a good job at rendering this concept in a sort of budget manner. Though I have a feeling this kind of concept will extend into watches with more intense levels of design and detailing enough to put them in the area of several thousand dollar watches. Indeed, I am very much convinced that a new era of high-end quartz with interesting-looking (and exposed) movements is on the horizon. Yes, these watches will share many part suppliers with traditional mechanical watches, but they will also require brand new types of skills (electrical engineering, for one) and part makers. 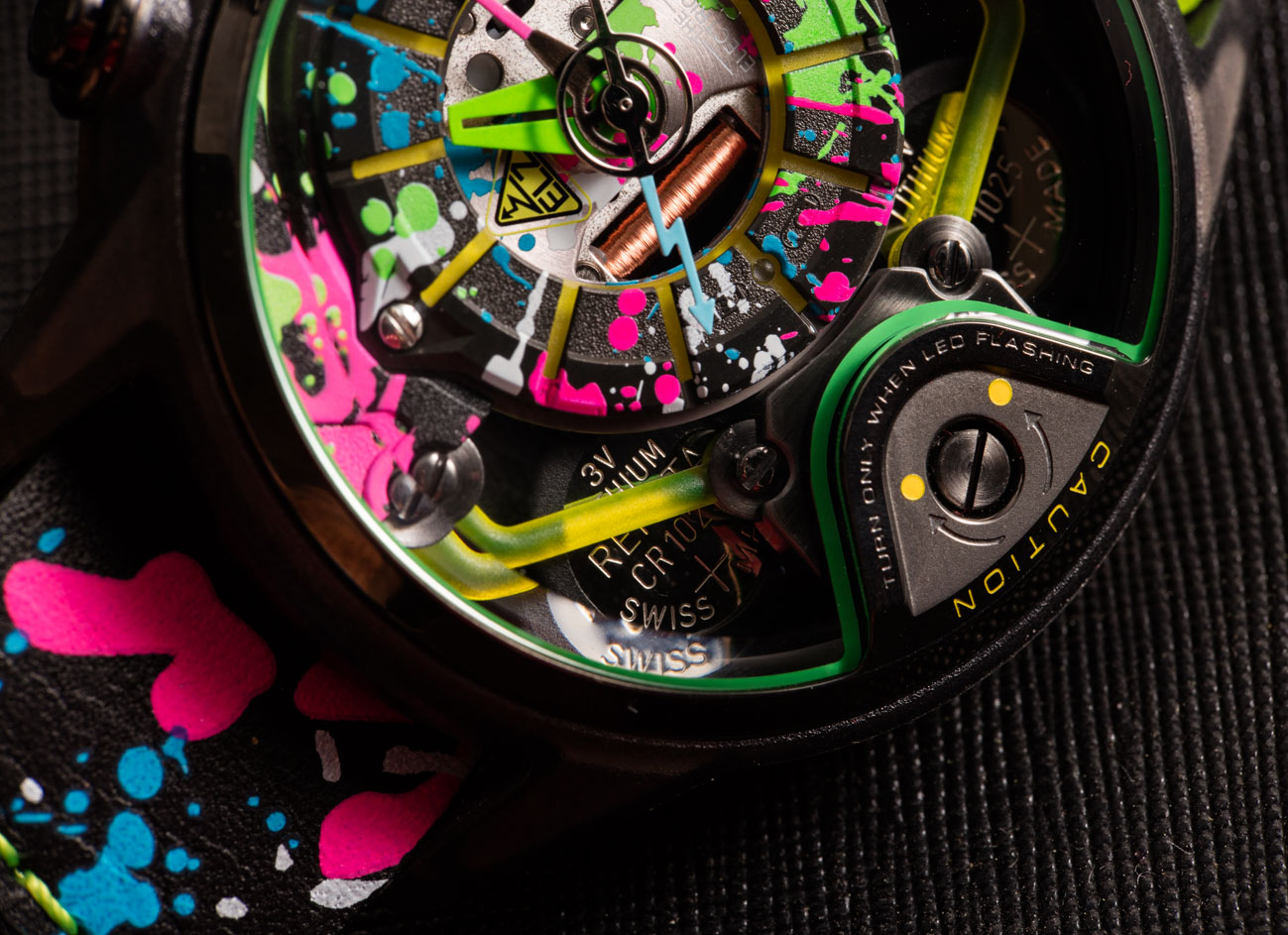 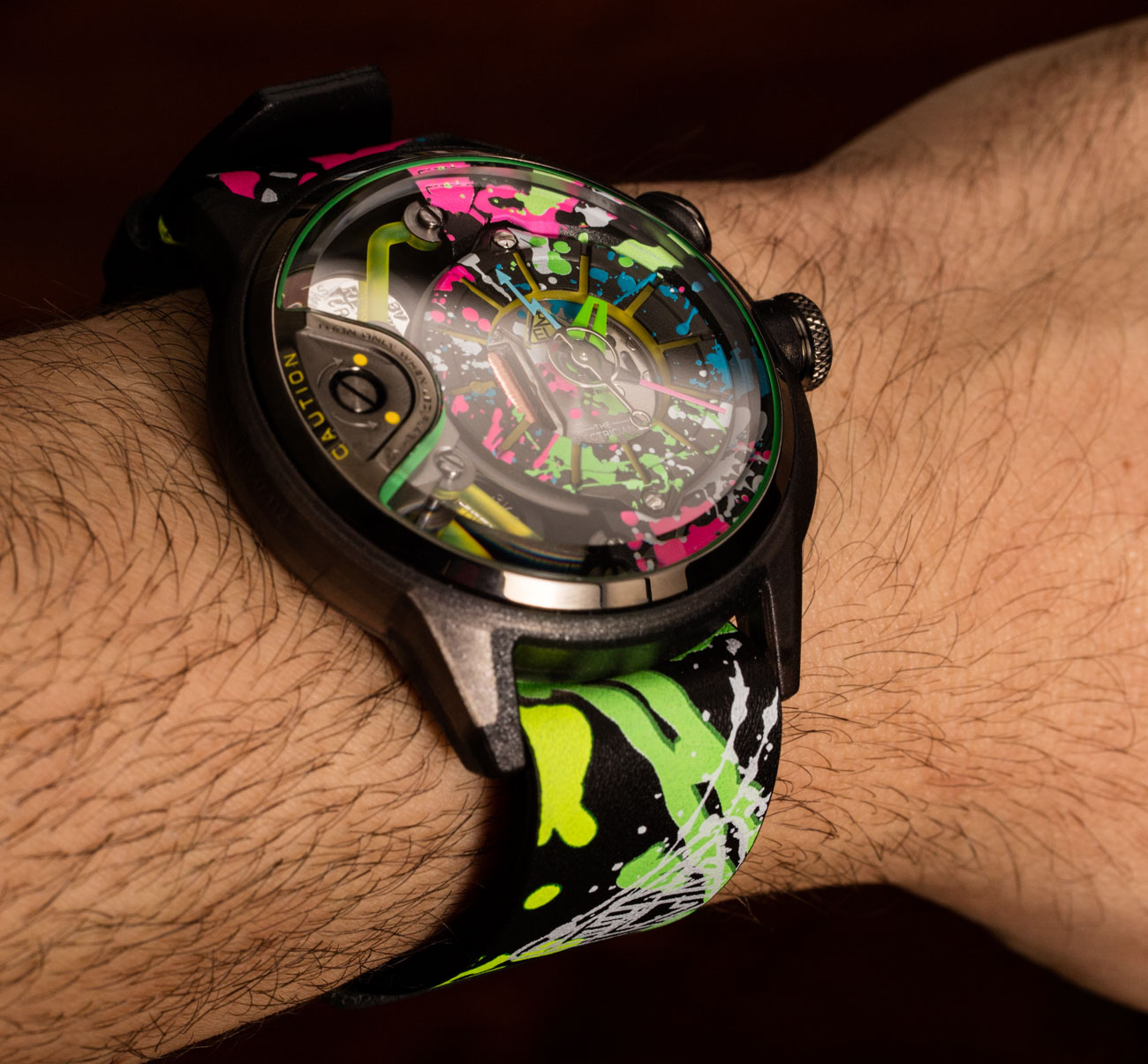 More on the future of high-end quartz later, I am sure. Let us now return to the ELECTRICIANZ Neon Z. The case is on the bigger size at 45mm with a steel inner core and a semi-transparent, smoked nylon material case. The custom-shaped crystal over the face is in K1 mineral crystal with a neon-green gasket that gives the edges a glowing green look. The battery stabilizers are also in a shade of neon green, and the dial, along with the NATO-style strap, is given a neon paint-splatter-style artistic treatment. Bright colors of the type that were popular in the late 1980s and early 1990s (I remember those times well) are apparently back in now. I always thought it was pretty cool (though not always in great taste, depending on the context) and am glad to see aesthetic color palettes like this. I’ve also been saying that “color is the new gold,” in the sense that during our depressed economic times, it is in very poor taste at times to wear gold or diamonds, whereas bright colors are a more democratic way to get attention.

The ELECTRICIANZ designed the light system for the watch in-house, how it all works is pretty simple. What you are meant to see is the suggestion of a single system, whereas what I believe is happening is that there is a standard quartz movement that operates the time and then a separate system for the LED backlight behind the dial. Yes, with the press of one of the pushers, the entire dial has a lattice backlight which offers a fun effect. 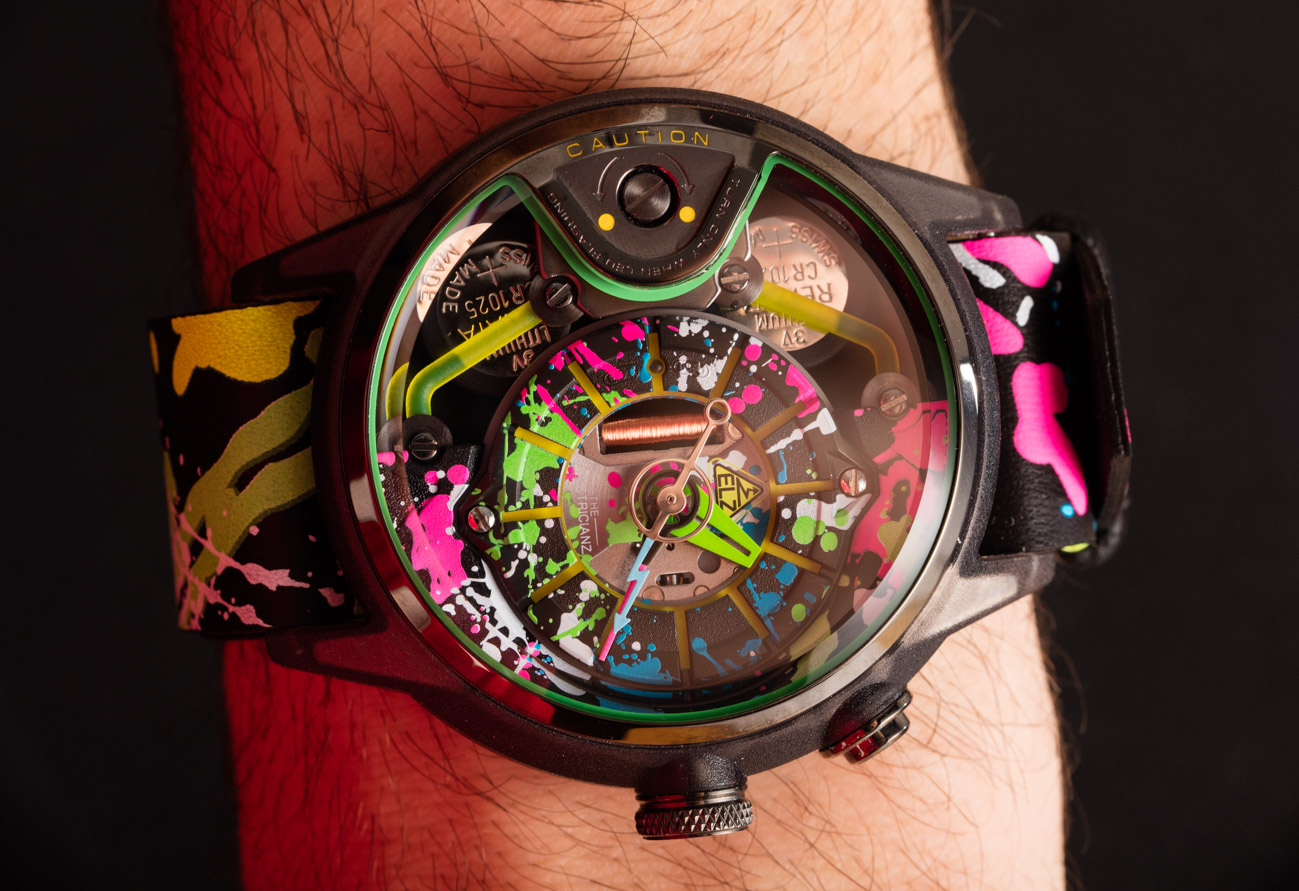 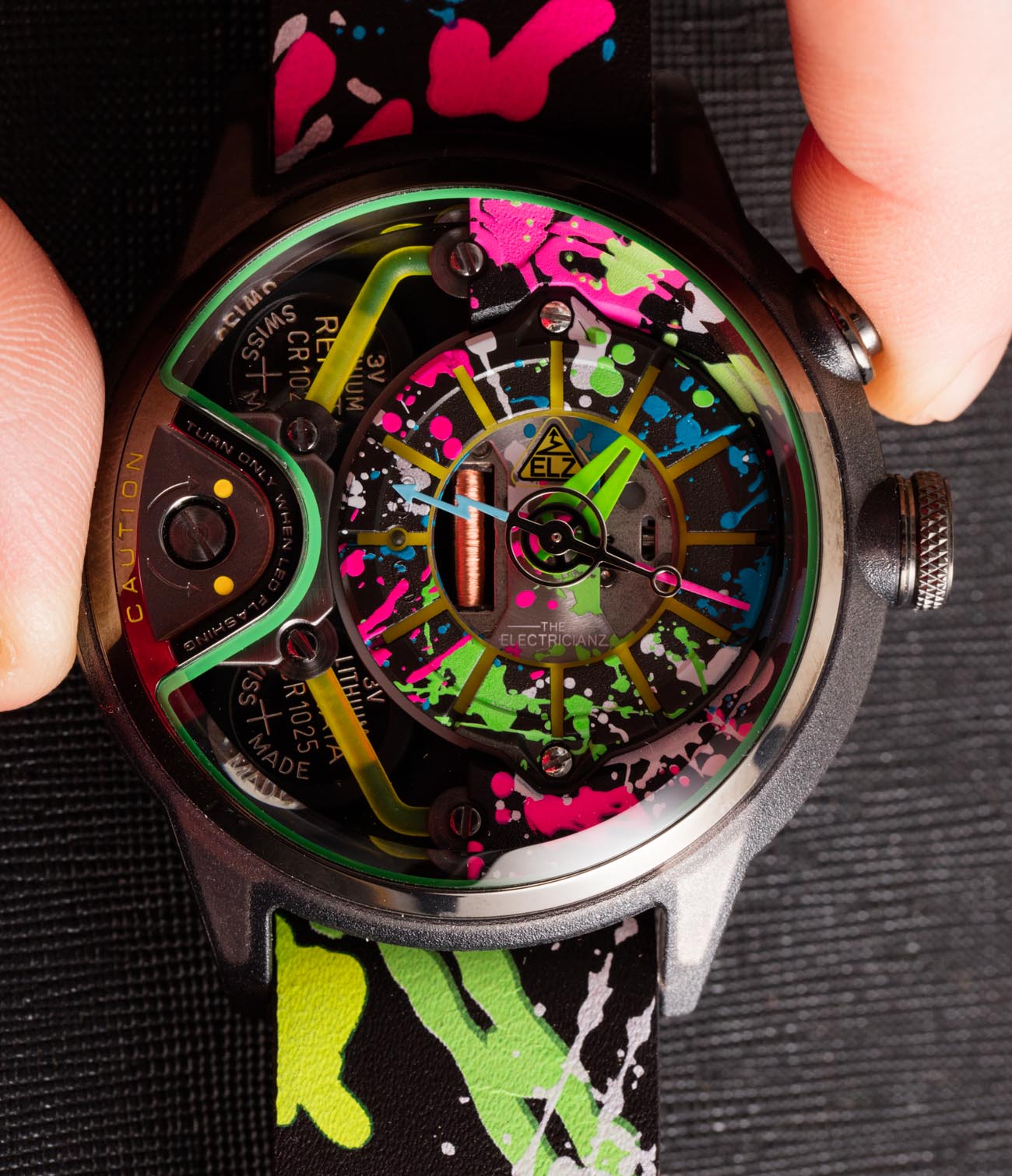 Given that there are two pushers, two sets of batteries (there are three batteries total), and no connection between the movement which operates the hands and the light system, it follows that the systems are different and that the quartz movement is just a stock caliber – which is fine. Going back to the light system for a moment, it has two batteries in order to power the four LED lights. My understanding is that only one battery works at a time. The way to switch from one LED light battery cell to the next is to use a small flat-head screwdriver and twist the small screw in the metal cutout space on the dial.

Unfortunately, the ELECTRICIANZ NEON Z neon green backlight isn’t as useful as it is cool. The hands themselves don’t light up, so the effect is mostly decorative. Yes, it does help you see the hands as they light up a bit as a result, but it isn’t nearly good enough to say that you can read the time at a glance in the dark. 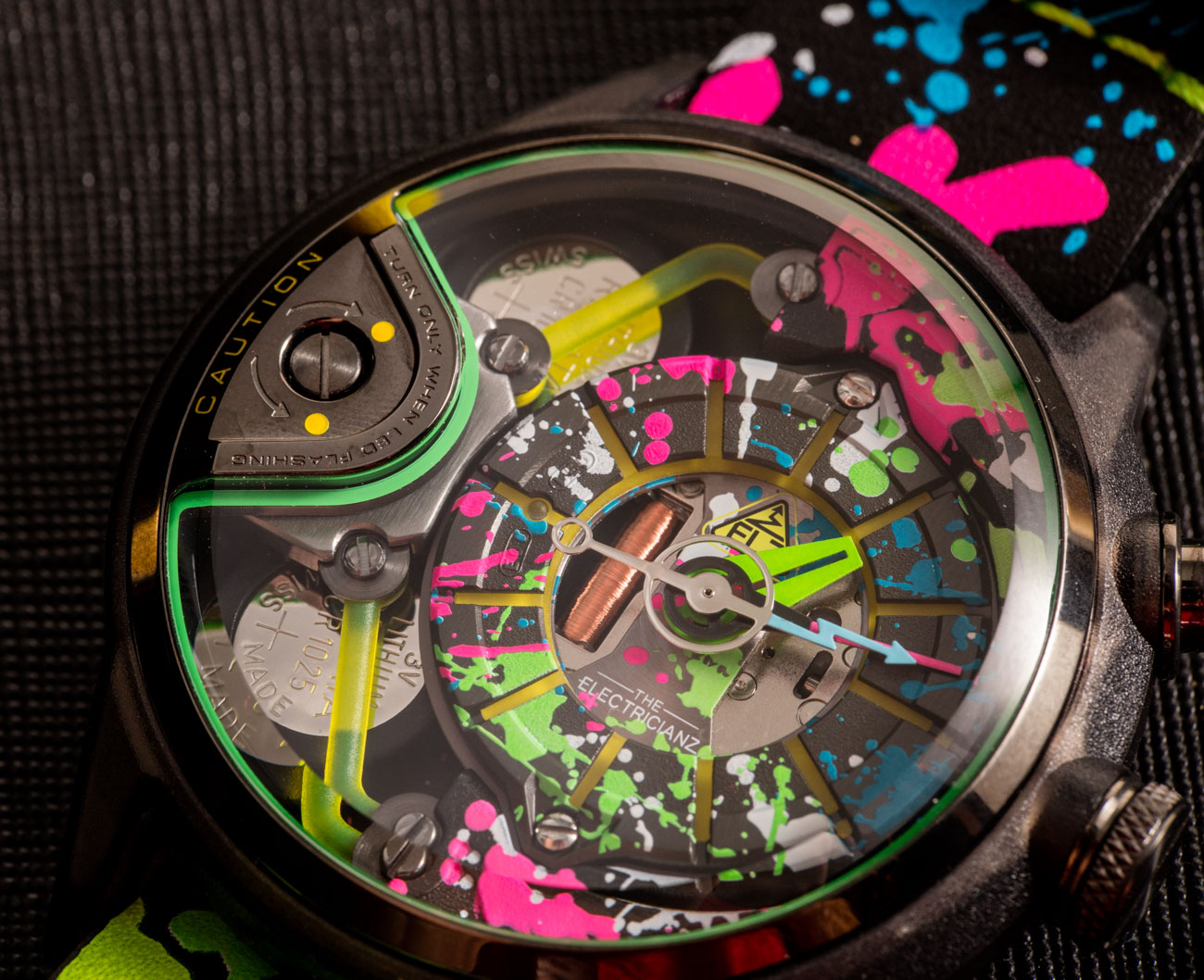 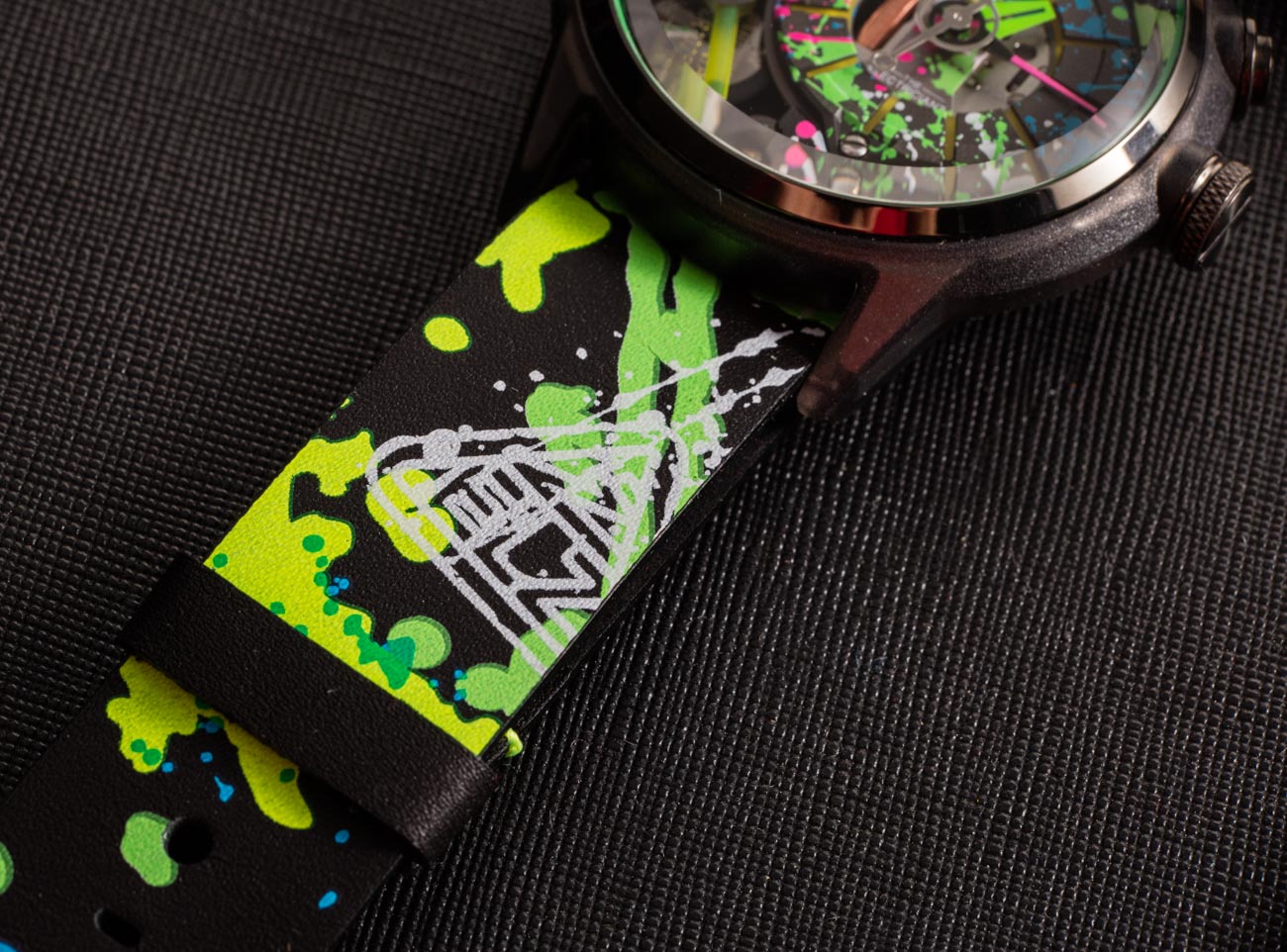 The dial itself is also a problem because, again, while it looks cool, the ELECTRICIANZ seemed to not push very hard for legibility. That’s a sort of a shame because the designers know how to do it but seemed to emphasize other priorities in this project. I actually really like the design of the hands, and in theory, this dial should have come out great. The ELECTRICIANZ didn’t spend enough time making different versions and sizes of the hands against the paint-splattered dial to get legibility high enough for my tastes. With more R&D, this dial could have been really stunning. Maybe they will try again.

Water resistant to 30 meters, the ELECTRICIANZ Neon Z is no sport watch, but I could see this brand evolving into one that has more durable versus just artsy timepieces. That is an “if” because, as I said, Studio Divine has often been ahead of the times with concepts and has probably not always received the consumer attention it deserves when it comes to the quality of its ideas. I do, however, want to see the brand increasingly incentivized to consider all the important details. 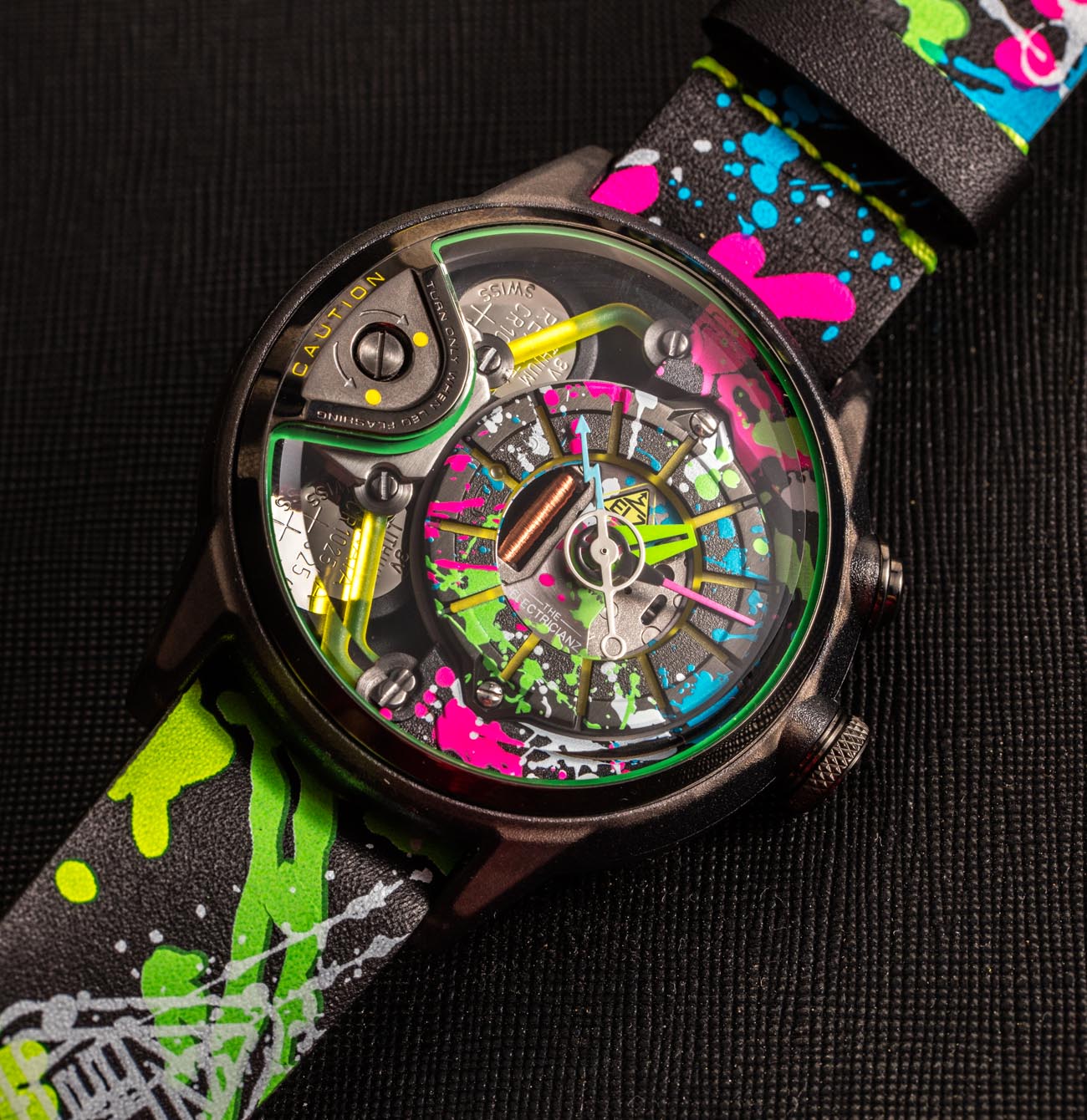 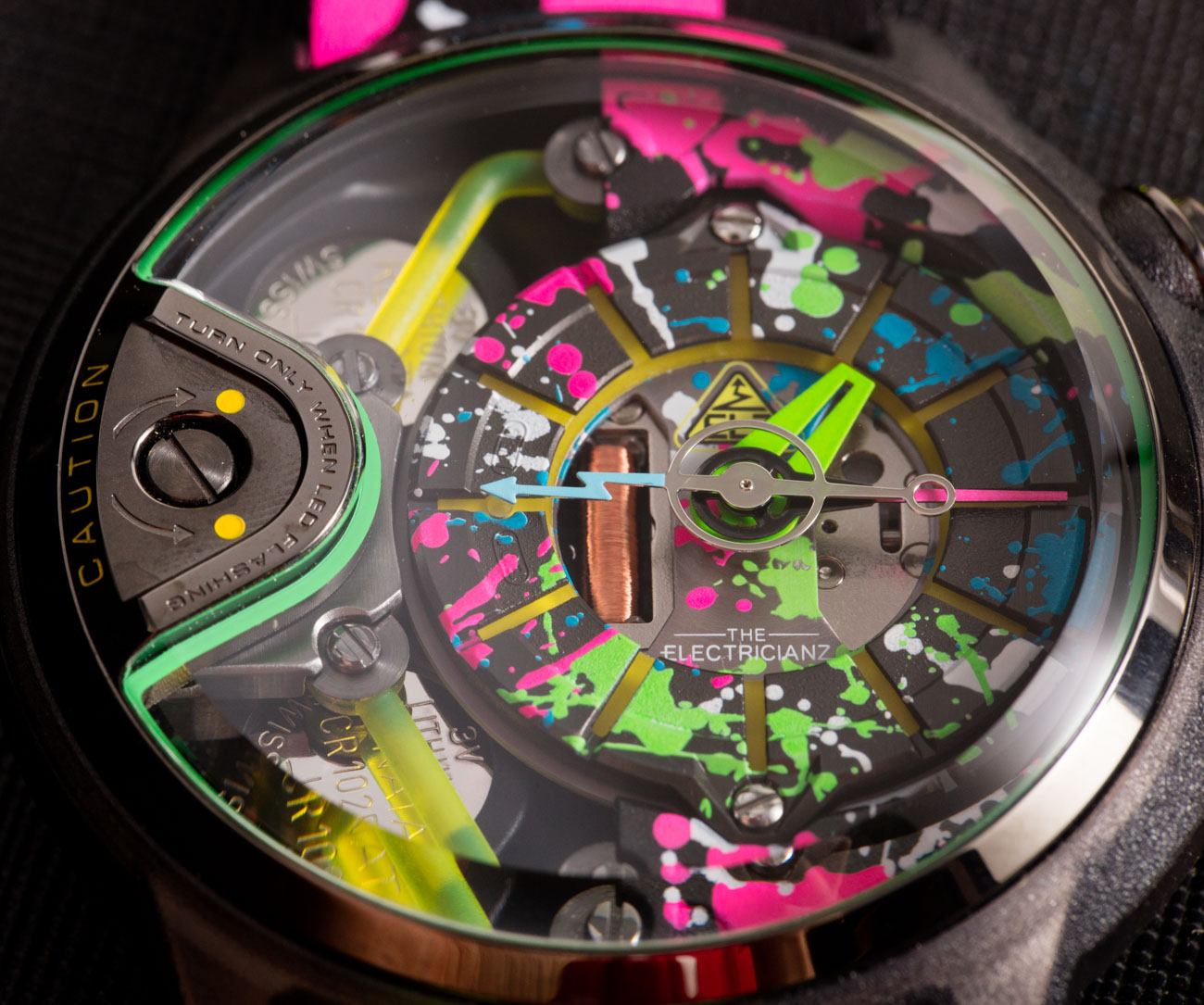 The ELECTRICIANZ Neon Z strap is probably the best or worst part of the watch, depending on your affinity for these colors. I can forgive the shortcomings of this watch because of the bold statement “the Graffiti” makes on my wrist, though I do recall most graffiti being actual composition as opposed to just paint splatter. The NATO-style strap is actually calfskin leather, nicely made, and very comfortable on the wrist.

A fun, flawed, and polarizing watch, the ELECTRICIANZ Neon Z probably represents a future of collectible wristwatches that today dabbles in the world of entry-level, youth-focused, and enthusiast-grade all at the same time. It might not do any of those things perfectly well, but it does make a loud and creative statement that the entire industry should notice. Price for the ELECTRICIANZ Neon Z reference ZZ-A2C/02 is $343 USD (before taxes). Learn more at the ELECTRICIANZ website here.