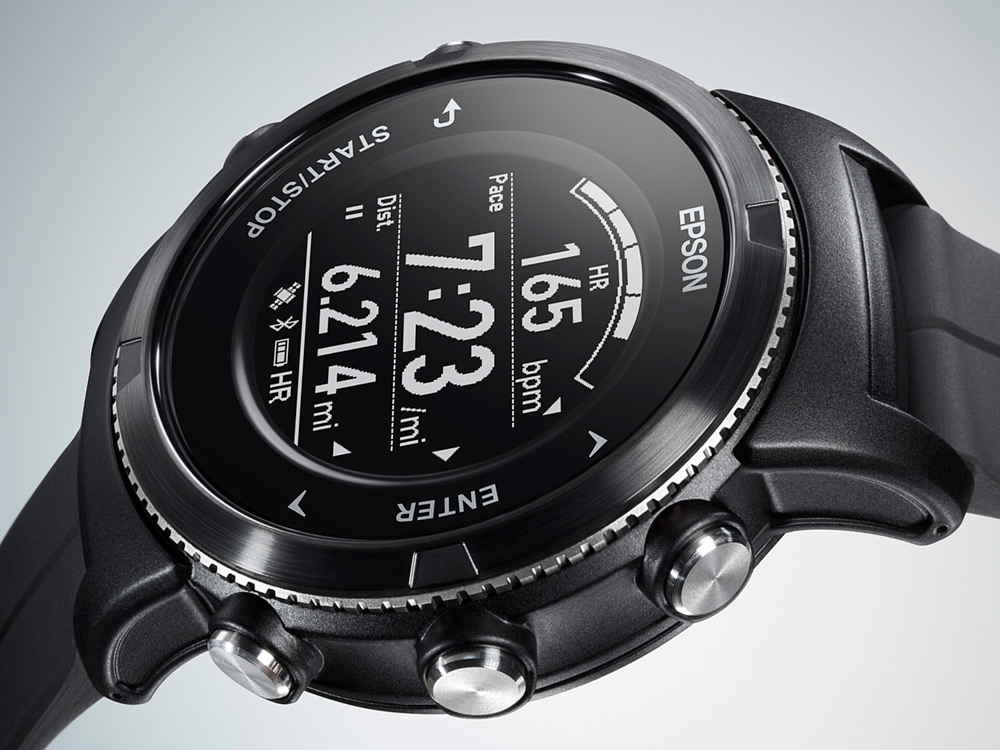 Epson isn’t a brand a lot of people are used to seeing on a watch face. The brand is mostly associated with printers (the name Epson itself apparently being an abbreviation for “Son of Electronic Printer”) but they also have considerable expertise in GPS and heart-rate sensor technology. Epson are a division of the Seiko Group, and have combined their skill in developing in-house, power-efficient components with the watch design chops and distribution network of Seiko Holdings Corp – who exist laterally to Epson in the group’s structure and, of course, in turn owns the company that produces Seiko watches. The result is this series of Epson ProSense watches, with a strong emphasis on fitness tracking and battery life. 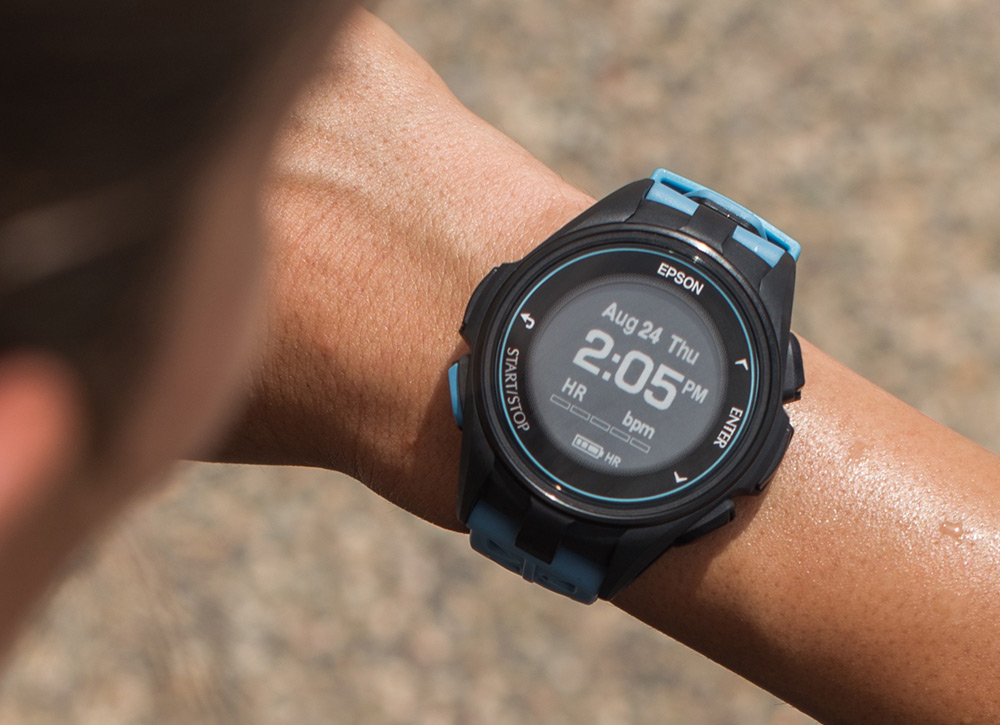 We knew that the Seiko Group were up to something in this space back in August, when the brand registered a series of product names for GPS-enabled sports watches with the FCC. At the time, we were expecting a Seiko-branded smartwatch to follow, so it comes as a surprise to see the ProSense watches branded as Epson instead. The watches do heavily utilize in-house Epson technology, including a new GPS chipset called RouteSense and a heart rate monitor dubbed CardioSense. Nonetheless, this is a surprising move for the Seiko Group, who could probably have promoted these watches more easily with Seiko on the dial instead. 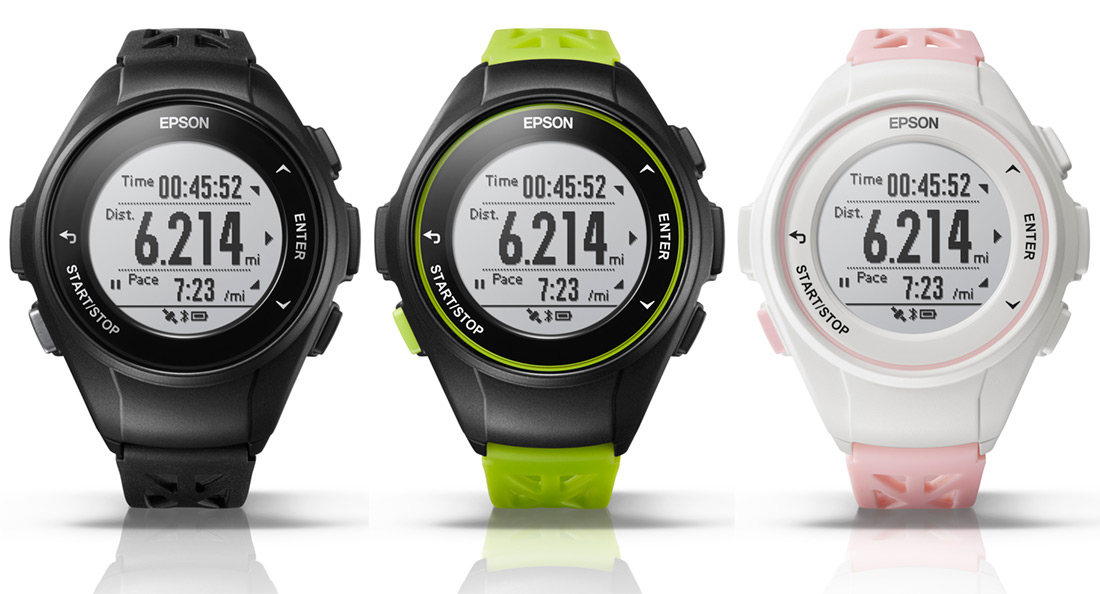 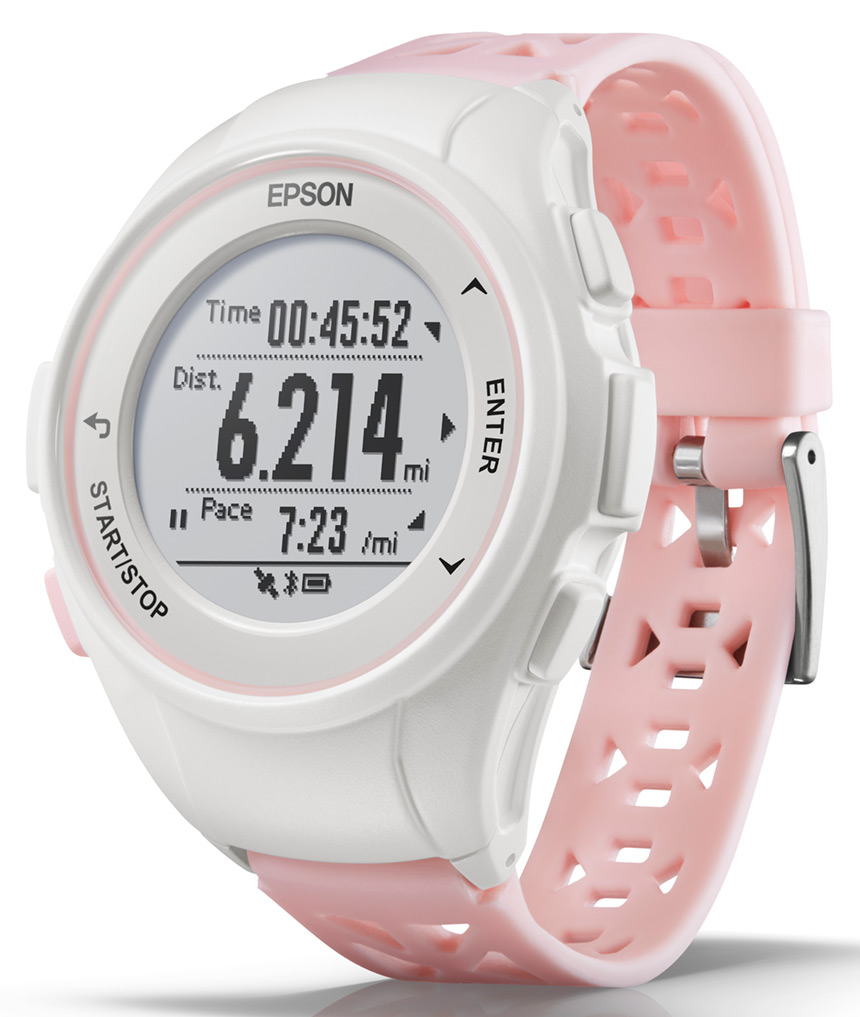 The Epson ProSense watches come in 5 varieties, which scale up in price and features as you climb the product ladder. The most basic model is the ProSense 17, which offers GPS functionality, activity tracking, vibration notifications for smartphone alerts or fitness milestones, as well as the ability to control a connected smartphone’s music playback (requiring an Epson View app to be installed and running on said smartphone). The ProSense 17 (and the 57 and 307 versions) features 5 bar or 50m water resistance, although the brand cautions against using the buttons while immersed. It can also save up to 64 sessions of workout data, which can be analyzed in detail using the Epson View app for iOS or Android. 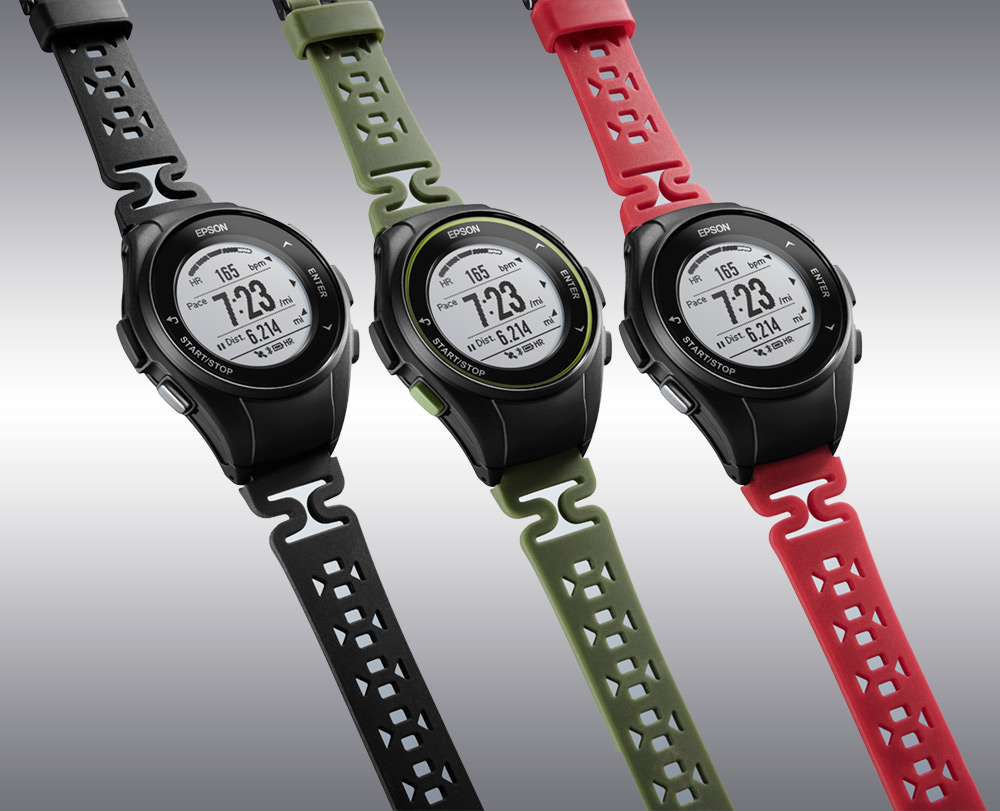 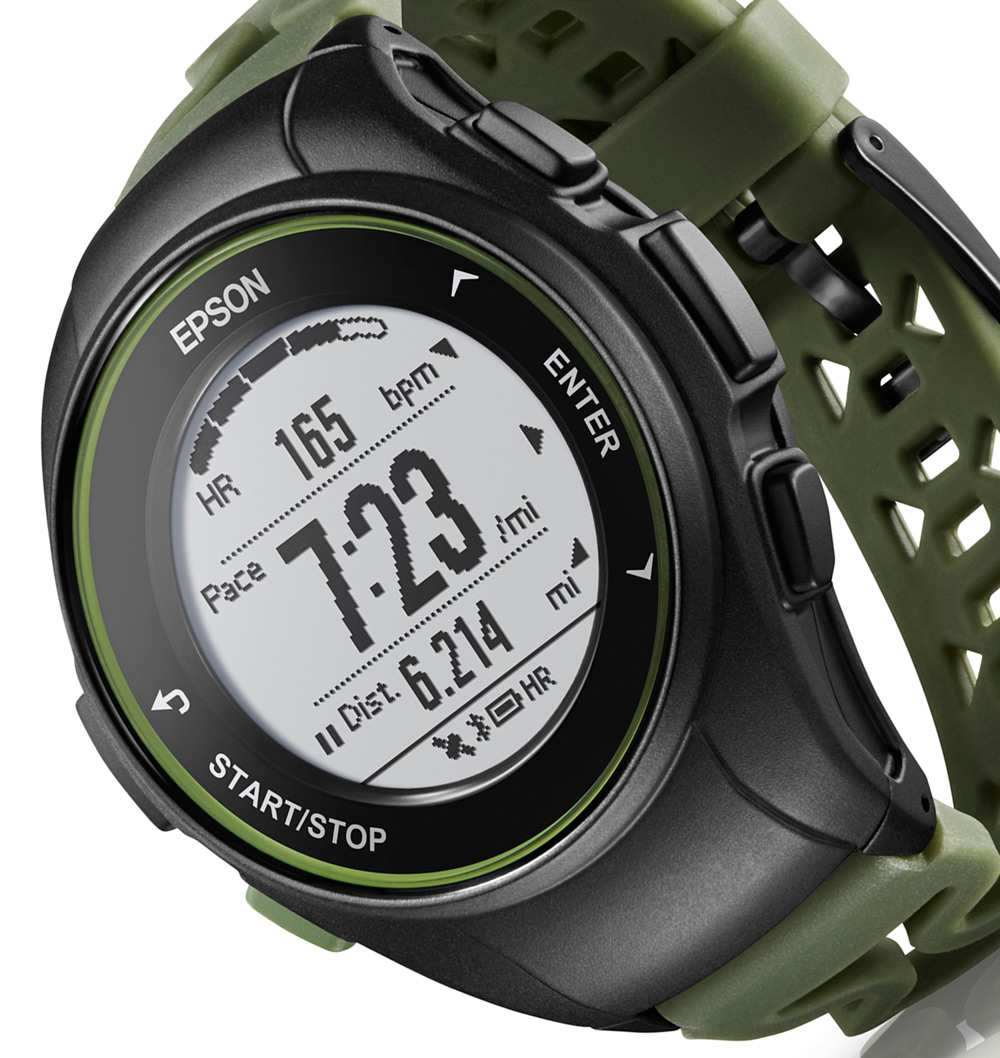 A feature the ProSense 17 notably lacks is a heart-rate monitor, although this can be remedied by purchasing an optional chest strap (which will also disable the music control function on the connected watch). By moving up a model to the ProSense 57, you get the heart rate monitor built-in to the caseback, as well as more advanced multi-sport functionality: the ability to track both open water or lap-based pool swimming, as well as indoor and outdoor cycling. Both the ProSense 17 and 57 models feature a basic LCD screen with 128 x 128px resolution and a backlight, and offer 10 hours of battery life with the GPS and heart-rate monitor engaged, or 30 days of watch-only mode. 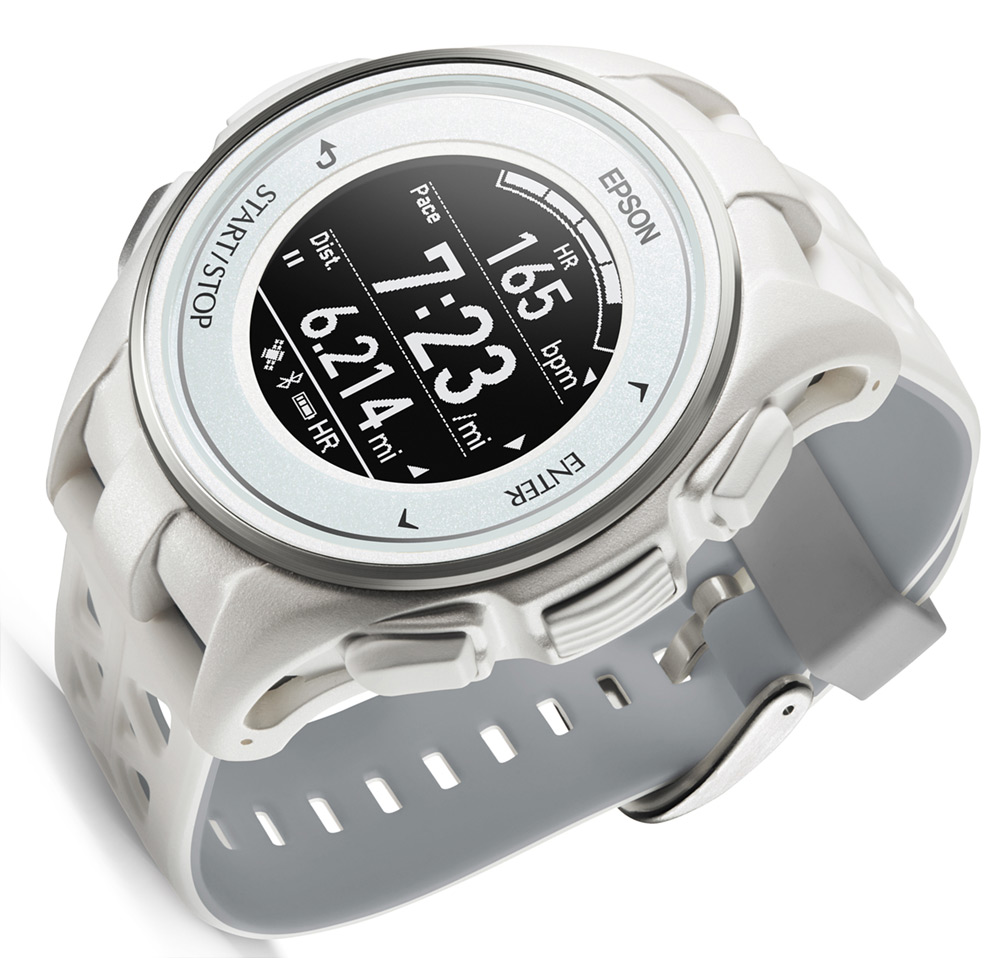 Climbing the ladder one rung further gets you to the ProSense 307, which offers some cosmetic upgrades in the form of a quick-release “pro silicone” strap and a proprietary EasyView display technology. This is an electrophoretic display (electronic paper) which should offer glare reduction and wide viewing angles, as well as an improved resolution of 240 x 240px. The ProSense 307 also doubles the battery life of the 17 and 57 models with all the functions engaged, although watch-only mode remains at 30 days. Perhaps a more power-efficient GPS or heart-rate chipset has been included in this model to account for the dramatically increased power reserve while under heavy use. On-board memory has also been increased to store up to 248 sessions of workout data. 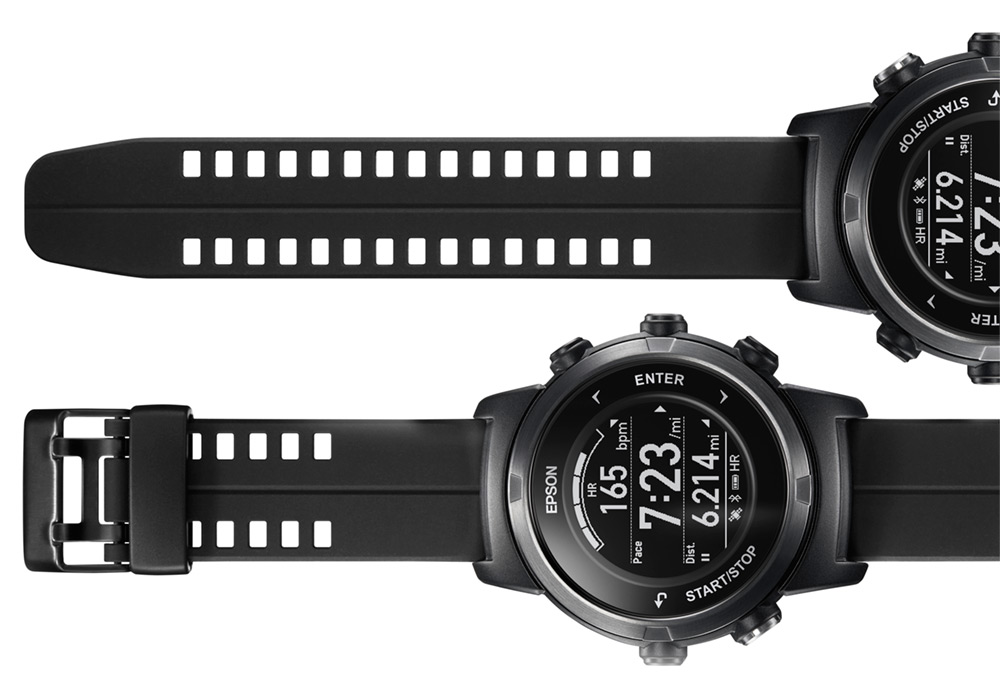 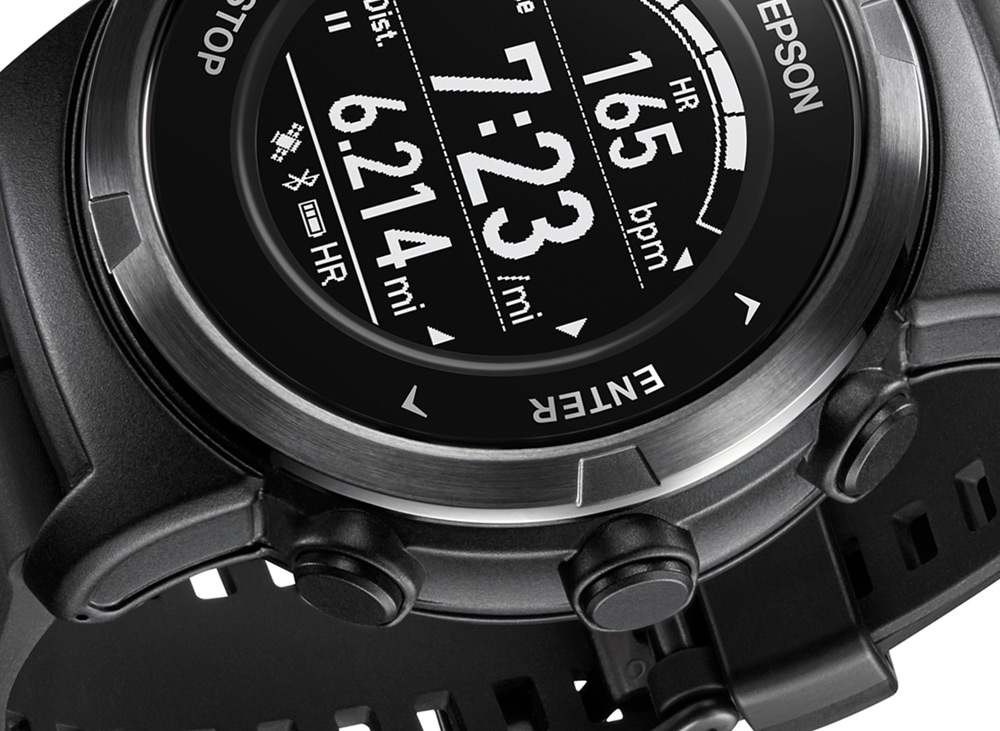 Finally, we have the two top-tier models in this lineup, the ProSense 347 and 367, which naturally include all the previous features with some premium added touches. These watches both boast a very impressive battery life indeed, at 46 hours with all GPS and heart-rate monitors engaged, or 60 days of watch-only mode. Epson are touting this as “the best GPS battery life in its class,” which is hard to argue with when some of its main competitors like the Garmin Fēnix 5 cap out at 24 hours with GPS engaged, and the Fitbit Ionic Smart Watch only manages 10 hours. The pinnacle Epson ProSense watches also boast increased scratch resistance in the form of a mineral crystal over the face of the 347, and a sapphire crystal for the 367, as well as an increase in water resistance to 10 bar (100m), making them well suited for aquatic sports. 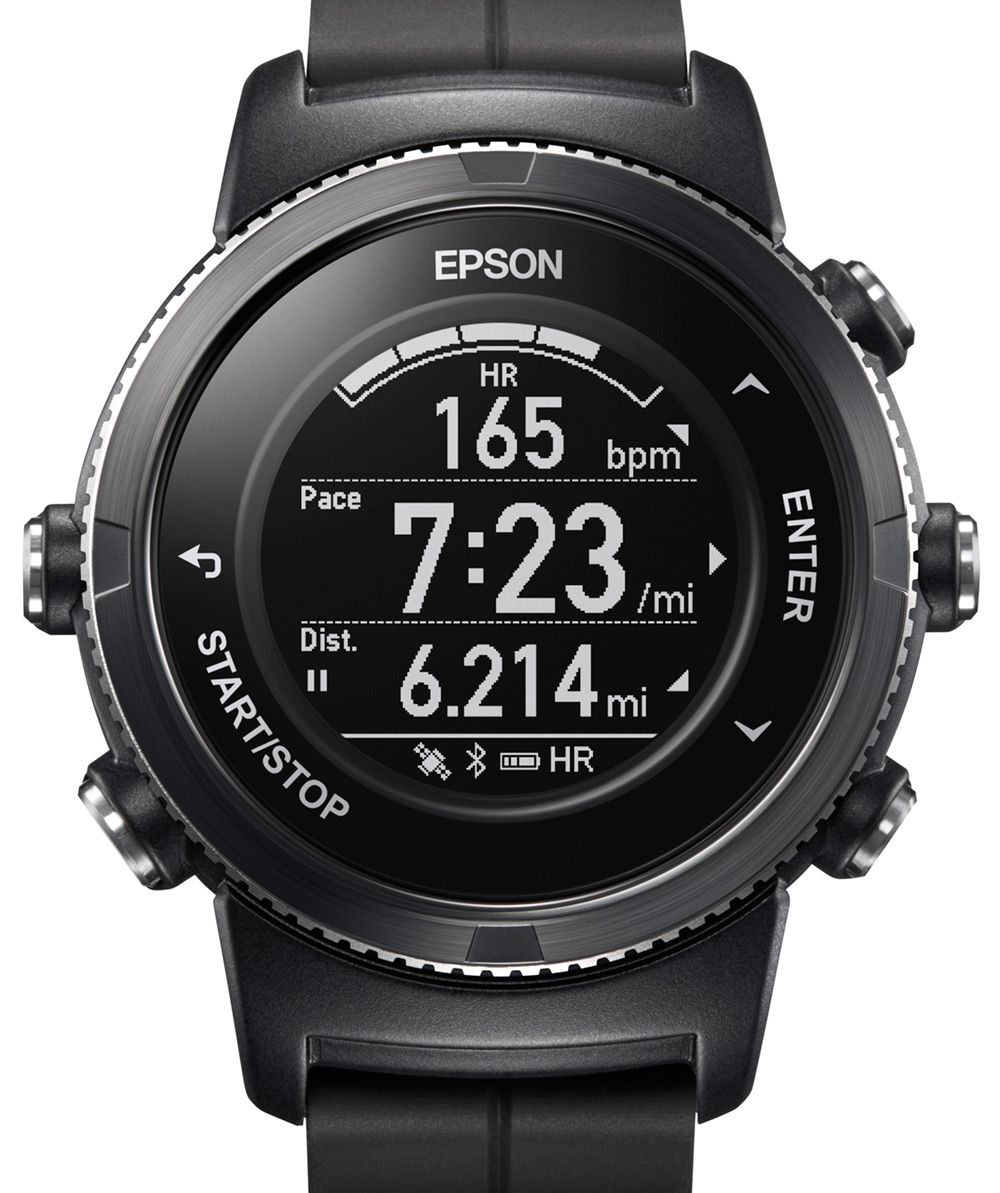 Navigating the user interface on these watches involves the use of 5 buttons, lacking the touchscreen options which are becoming commonplace for smartwatches and connected devices. At 2 o’clock we have the “up” button, “enter” at 3 o’clock, and “down” can be found at 4 o’clock. The “start” button is positioned at 8 o’clock, and finally we have “back” at 9 o’clock. These buttons can be pressed or held to activate different functions. To enter music control mode for instance, you would press and hold the Back button for 2 seconds, after which you can start or stop the current track with Enter, hold Up for 2 seconds to skip, hold Down for 2 seconds to play previous, or single-press either button to raise or lower the volume. Not the most intuitive of systems perhaps, but once the wearer grows accustomed to it, I don’t expect it will pose many usability issues. 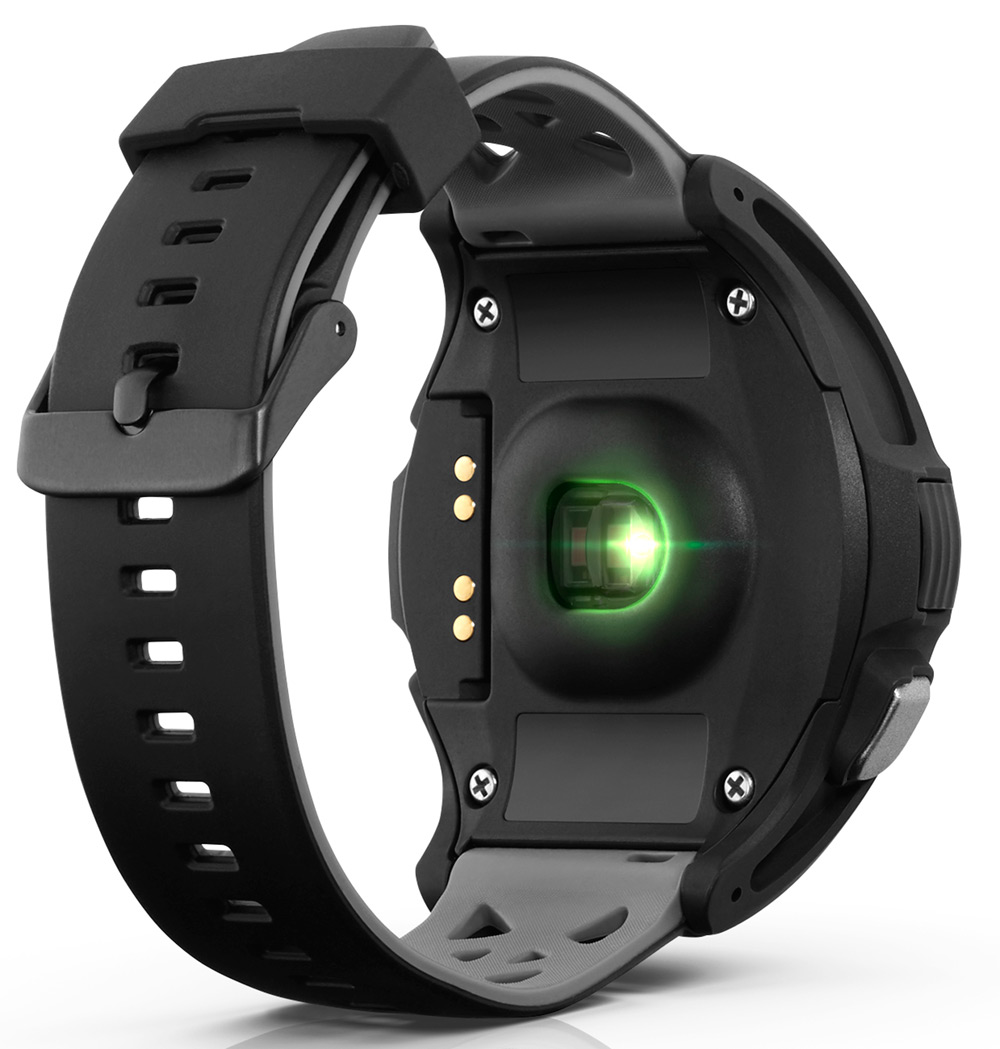 Workout mode is likely the most common feature an Epson ProSense watch-wearer will want to use. You can navigate to an activity selection screen by pressing the Down button, at which point you can select a variety of workout modes (depending on the model of ProSense you’re using) including: 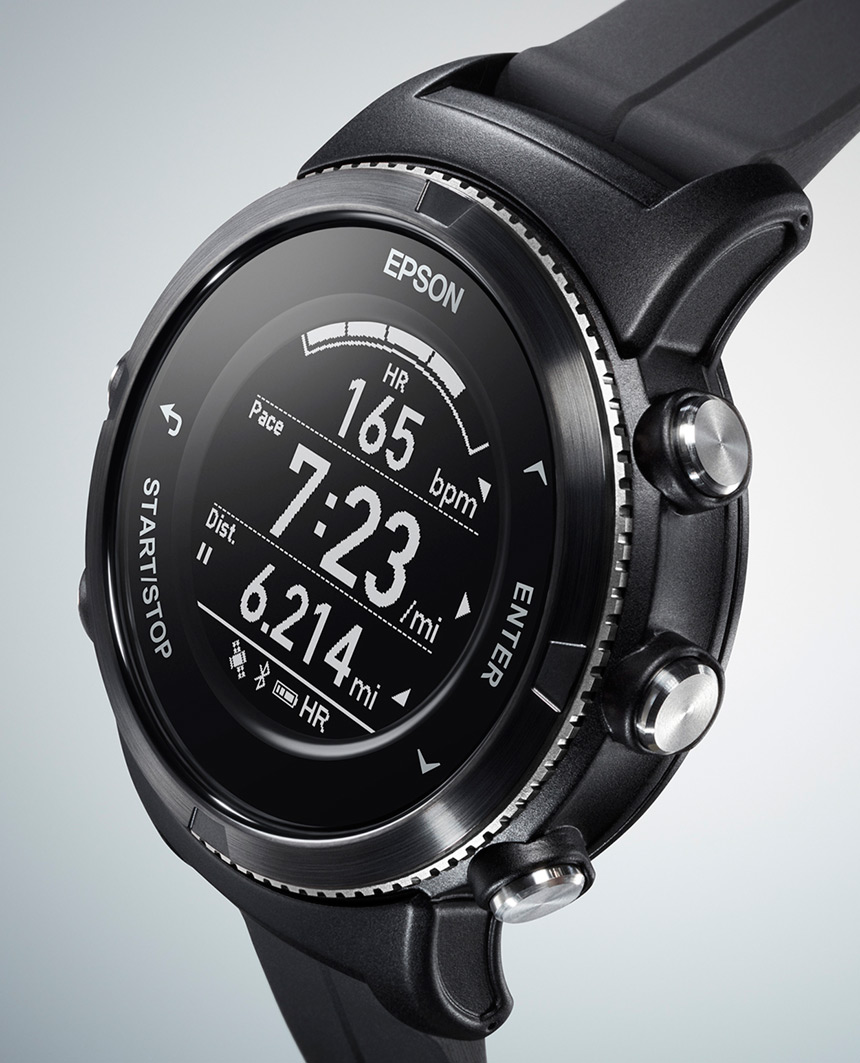 Once the workout mode is selected, the Start button will begin tracking your activity, which can include things like recording laps, time elapsed, distance traveled, calories burned, steps taken, steps per minute, heart rate per minute, average and maximum heart rate, and a slew of other metrics. This can all be viewed on the Epson View app for Android and iOS, where you can track your activity on a calendar, set goals, and even earn “medals” every time you beat a personal best. Both Alarm and Stopwatch functions are available on every model, and you can customize the display on the ProSense 307 and its bigger brothers to an analogue watch face for a more traditional look. 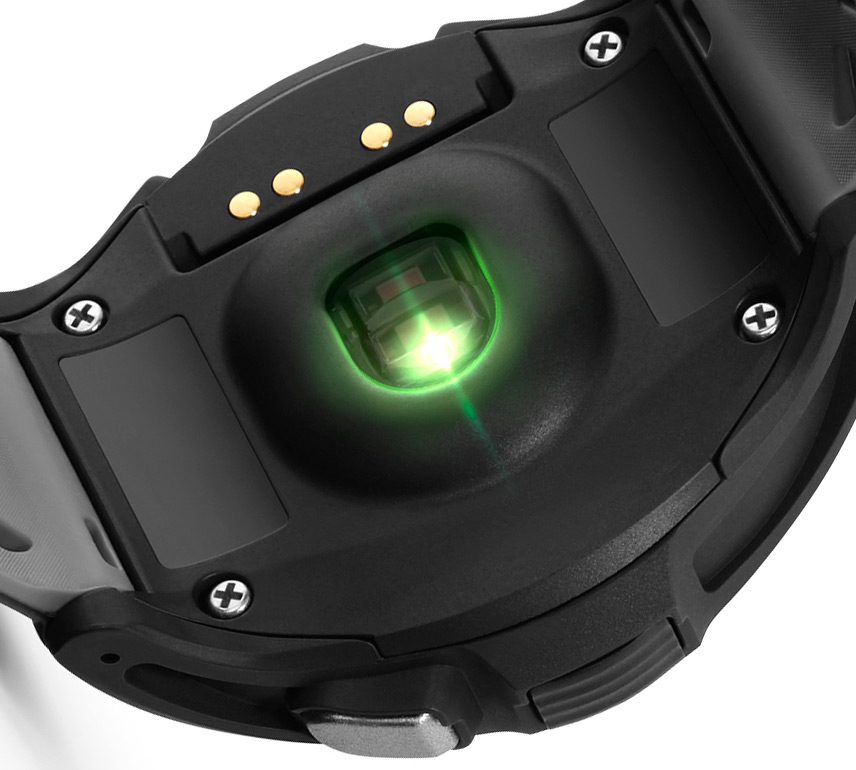 The Epson ProSense Watches are by no means luxury connected devices. Even compared to other dedicated fitness trackers, they lack some modern elements like touchscreens with color displays, contactless payments via NFC, and the ability to read notifications or answer calls via the watch. These are also quite large watches at 47mm wide by 15.5mm thick across most of the collection (the ProSense 307 is inexplicably thinner at 13.4mm). In contrast, their main competitor, Fitbit, clocks in at the very wearable 36mm for their Ionic Smart Watch, although it lacks the water resistance or battery life of the upper-end ProSense models. 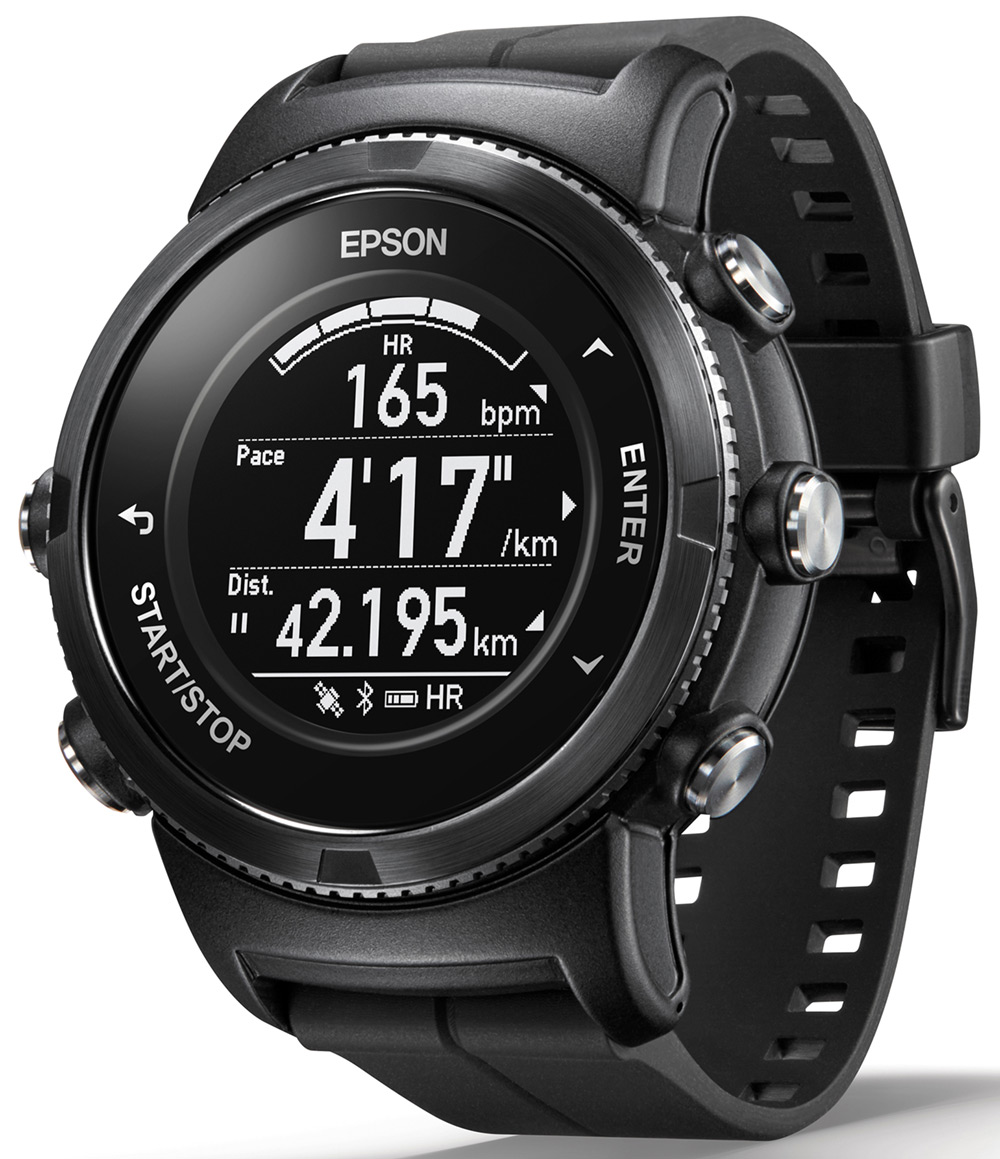 The Epson ProSense collection seem to be primarily designed for athletes who want their fitness trackers to keep going for as long as possible between charges, recording workout metrics for most or all of that time. In that category, the Epson ProSense Watches are largely without peer, and the 347/367 models have the added benefit of strong water resistance for swimmers. The EasyView screen also promises strong legibility under most conditions, and a quick release strap system offers some style versatility. The ProSense 17 has a retail price of $99, the ProSense 57 is priced at $149, and the ProSense 307 is going for $249. The top-range ProSense 347 and 367 have an asking price of $349 and $399, respectively. epson.com