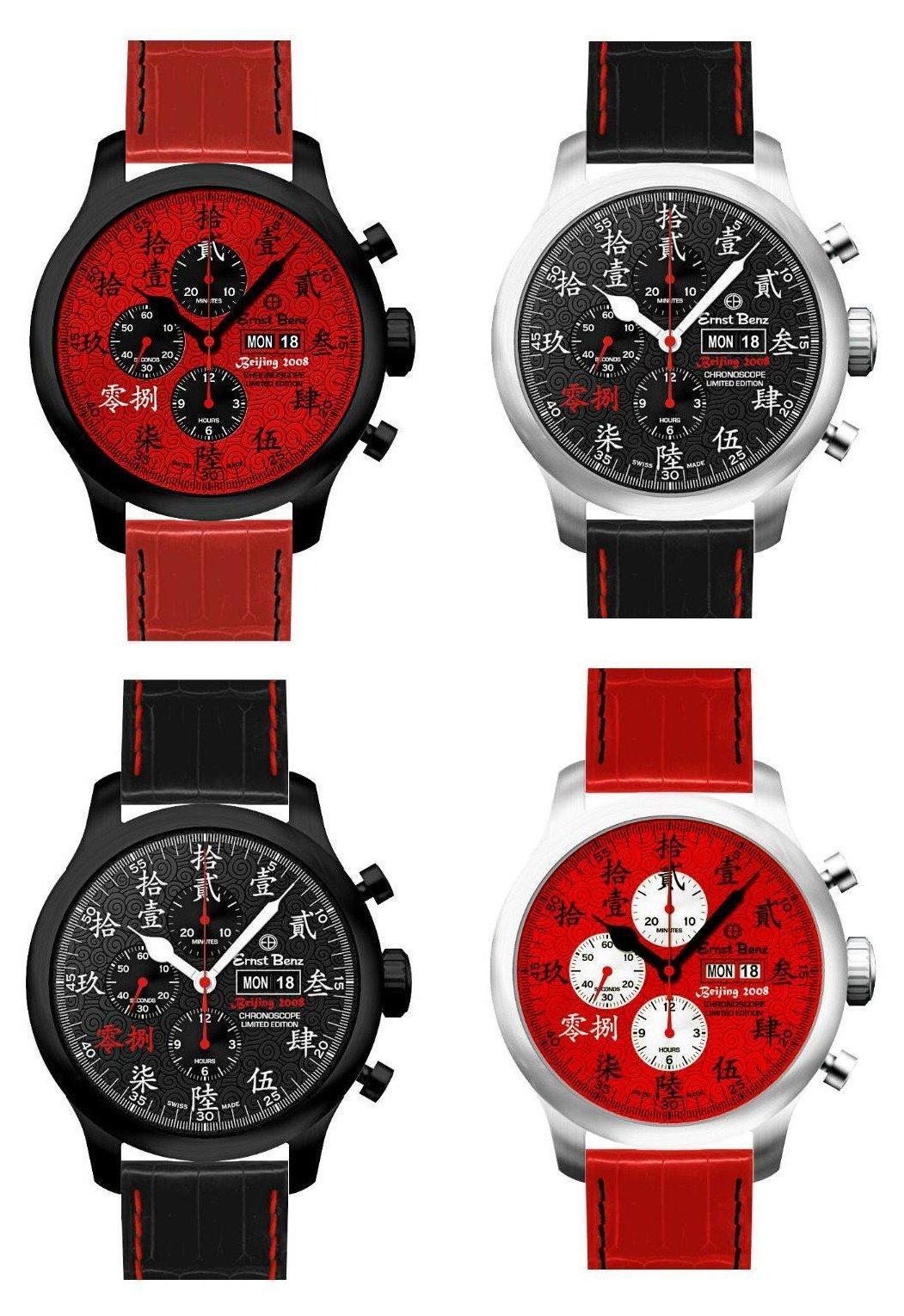 Typically speaking I am not a huge fan of anything that Mario Batali (or other Food Network chefs) promotes. The large, overly orange man is one of several “brand ambassadors” of Swiss Ernst Benz watches. Accordingly, Ernst Benz also offers a large, overly orange version of its popular Valjoux 7750 based watch named the Chronoscope, which is part of a Mario Batali edition. Though not all of their watches have such silly companions.

The newest Ernst Benz Chronoscopes are a limited edition in recognition of the Olympic games being held in Beijing China. These watches are actually more a tribute to the city, than the games, which is a good thing. Perennial Olympics “official time keeper” Omega also has its limited edition 2008 Olympics watch (seen here) that makes particularly good use of the well known five ring design.

So what is it that makes looking at these Chinese themed Ernst Benz Chronoscope watches so pleasant? Well for one we all seem to love red and black. Be it red with black trim, or black with red trim, it always looks cool. You could take a 30 dollar Casio and make it black with red trim; instantly cool. Then, you have something us Westerners are not used to; Chinese numerals. No, I can’t read them, but based on their location, I can guess they number 1 through 12. Actually, the “8” is distinct as it indicated “08” for the year of the Olympics. And, as many of you know, 8 is a lucky number in Chinese culture.

The dial patterns are gorgeous really. Look closely and you will see a traditional Chinese background design that looks great with the characters. Functionality is pretty chronograph standard, utilizing the full feature set of the automatic Valjoux 7750 with the 12 hour stopwatch, date, and day of the week. I love the size of this watch at 47mm wide. What is funny is that Asian market watches are typically much smaller than those for Europe and the US, typically 36-38mm. So I hope that the Chinese are ready to bring on the big ways of the west with this Ernst Benz watch.

As part of this homage the China, Ernst Benz is very particular about pleasing the current Chinese government. The distinct reds of this watch are noted as “China Red.” Statement about the government or otherwise? The black hands and cases of the black watches are done in PVD. My choice of course is the black PVD case model with the red face, black hands, and red alligator strap. Now that is a nice watch!

You’ll have to act fast though, as there are only 88 pieces of each watch as part of this limited edition. If you are lucky enough to get one, you’ll get a Chinese styled packaging and tons of other Chinese themed accessories and pamphlets. All pre-approved by the Chinese government of course.