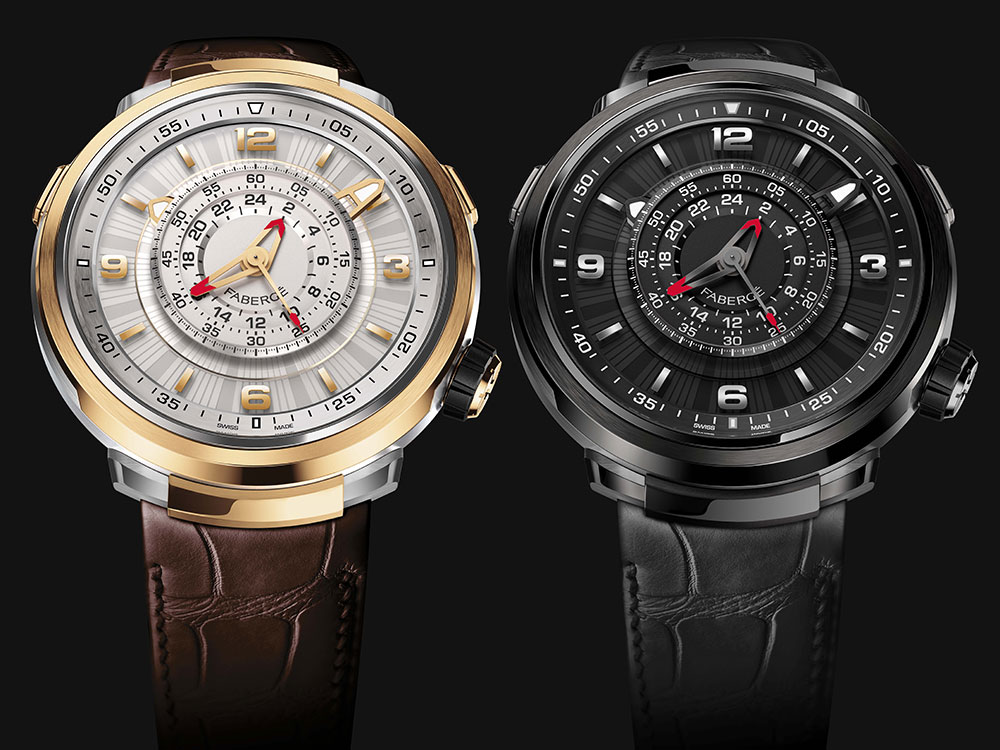 Beyond the cursory knowledge of their famous jeweled eggs, I only came to know of Fabergé in early 2014 when it was reported that a Fabergé egg was bought at a flea market for around $14,000 and was later sold for tens of millions of dollars. Now revived in the watchmaking world, the brand has impressed us with the Visionnaire DTZ watch – a dual-time-zone watch that is unlike any other. Continuing in the same vein is the new Fabergé Visionnaire Chronograph, a watch that distinguishes itself as part of an identity that is emerging to be uniquely Fabergé. 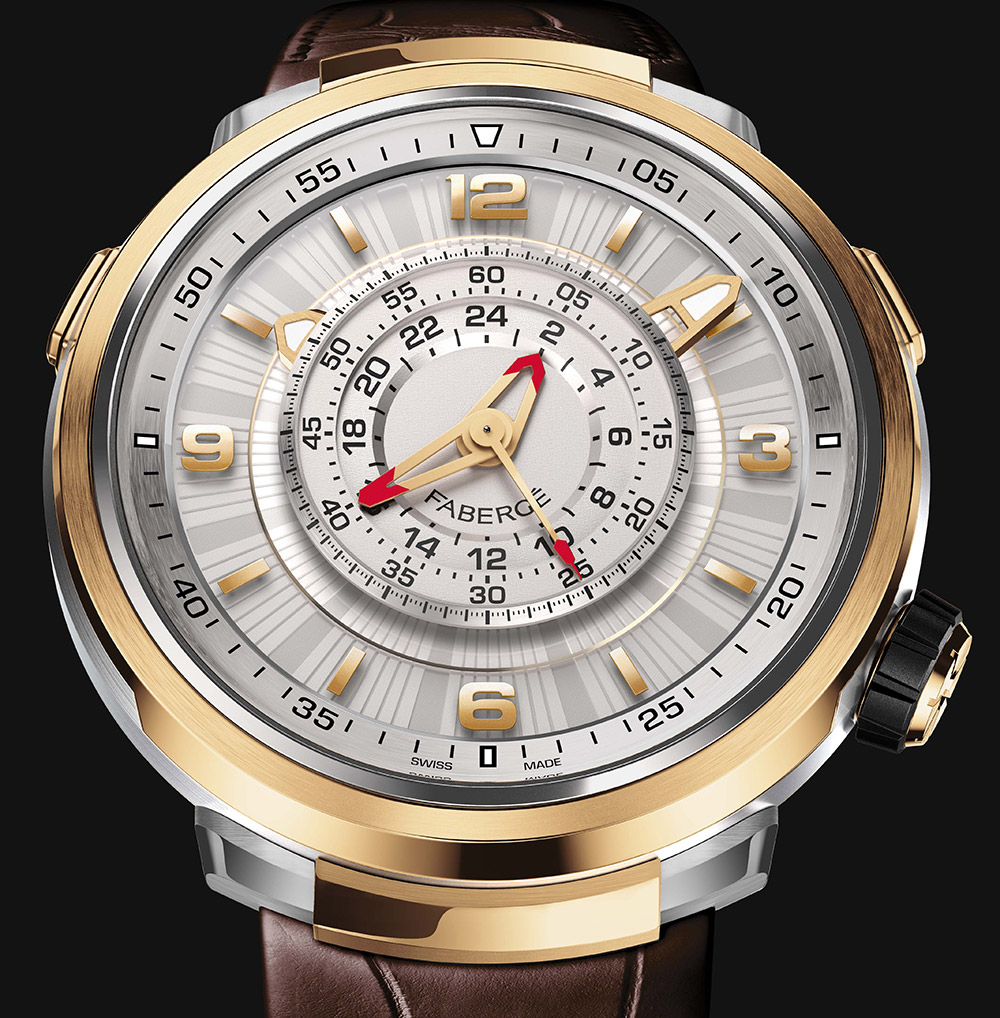 There will be two versions of Fabergé Visionnaire Chronograph watch: in 18K rose gold and titanium, and in black ceramic and titanium. The rose gold model will come with 18K rose gold pushers and crown, and a white opaline dial; while the ceramic model will come with DLC-treated titanium pushers and crown, and a black dial. The pushers for controlling the chronograph function are located at 10 and 2 o’clock, while the crown is positioned at 4 o’clock. Case size is a fairly large 43mm and water-resistance is rated at 50m. 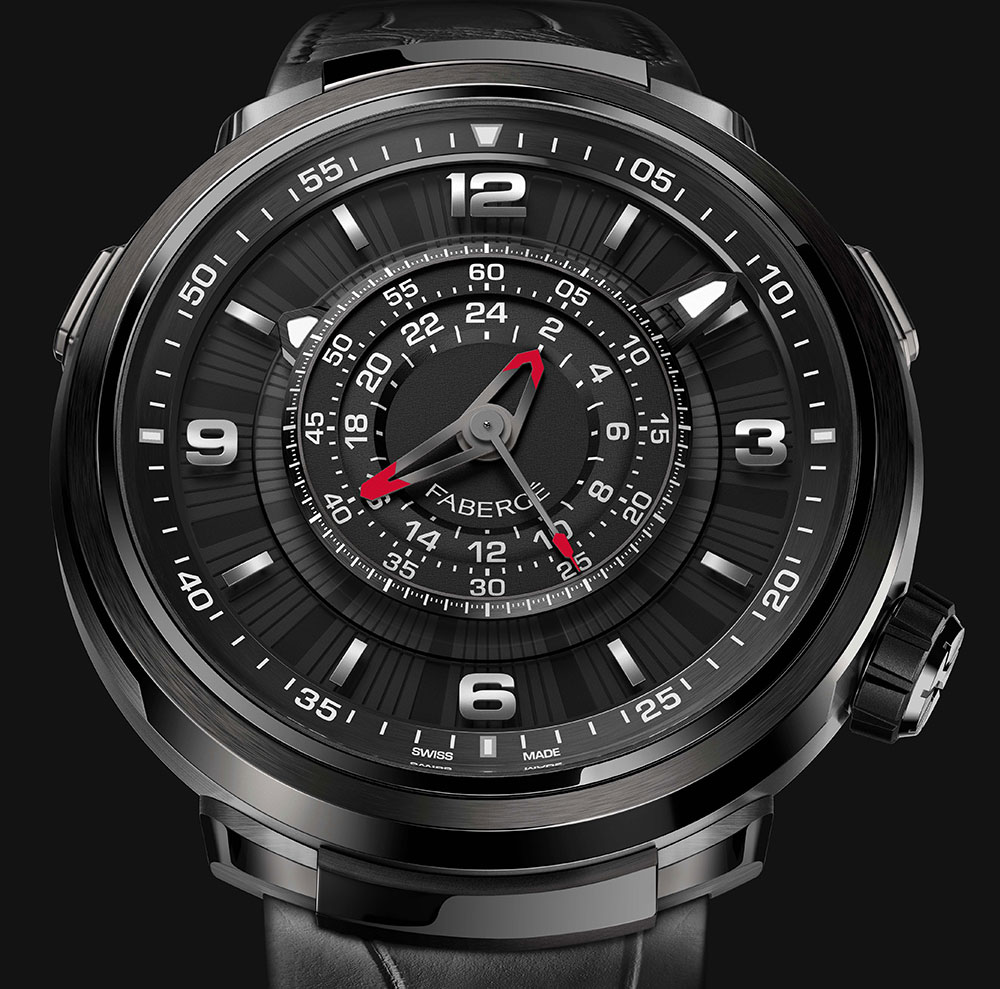 As you may have already noticed, what is unique about this watch is that it doesn’t have any sub-dials as a typical chronograph does. Like the earlier Visionnaire DTZ watch, this new Fabergé Visionnaire Chronograph places the complication in the center. So in this case, the elapsed time is read just like the hours, minutes, and seconds of a standard three-handed watch. The actual time is read off the hour and minute hands which are positioned on the periphery of the center chronograph dial. It really is a unique layout for a chronograph watch. 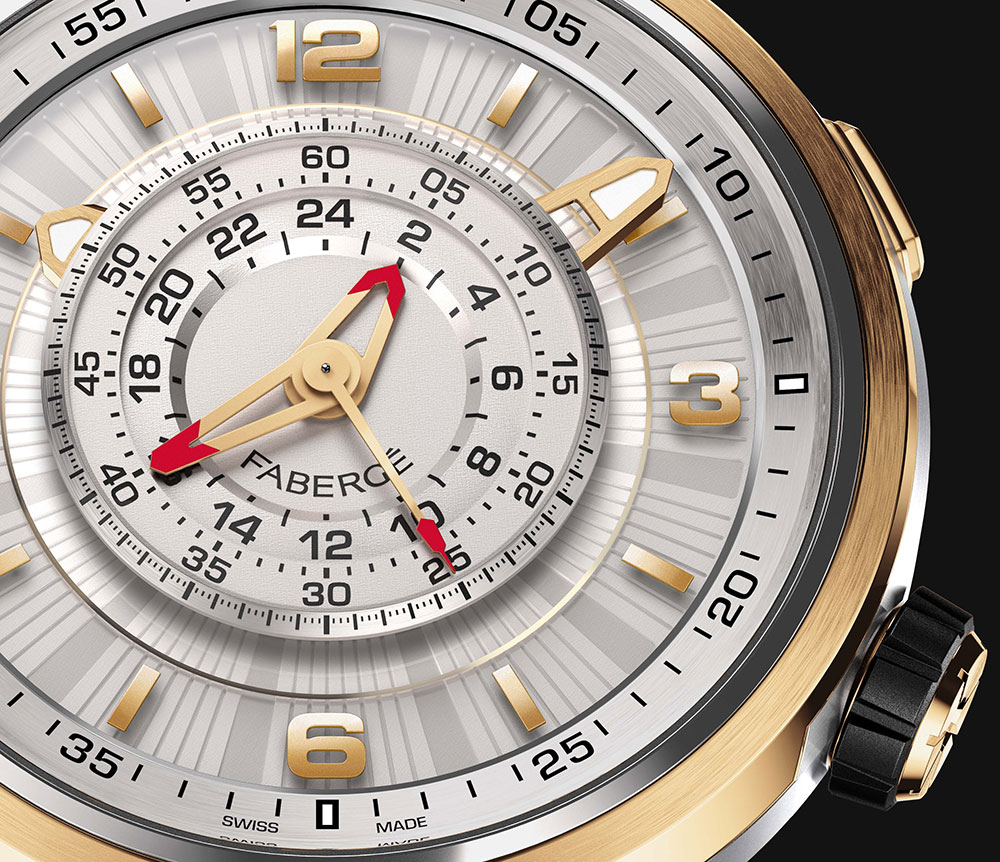 Enabling this is the self-winding caliber AGH 6361, which is also known as the AgenGraph, a revolutionary new chronograph movement designed by the movement designer Agenhor, which was founded by legendary watchmaker Jean-Marc Wiederrecht. Wiederrecht is also the man behind the Fabergé Visionnaire DTZ. 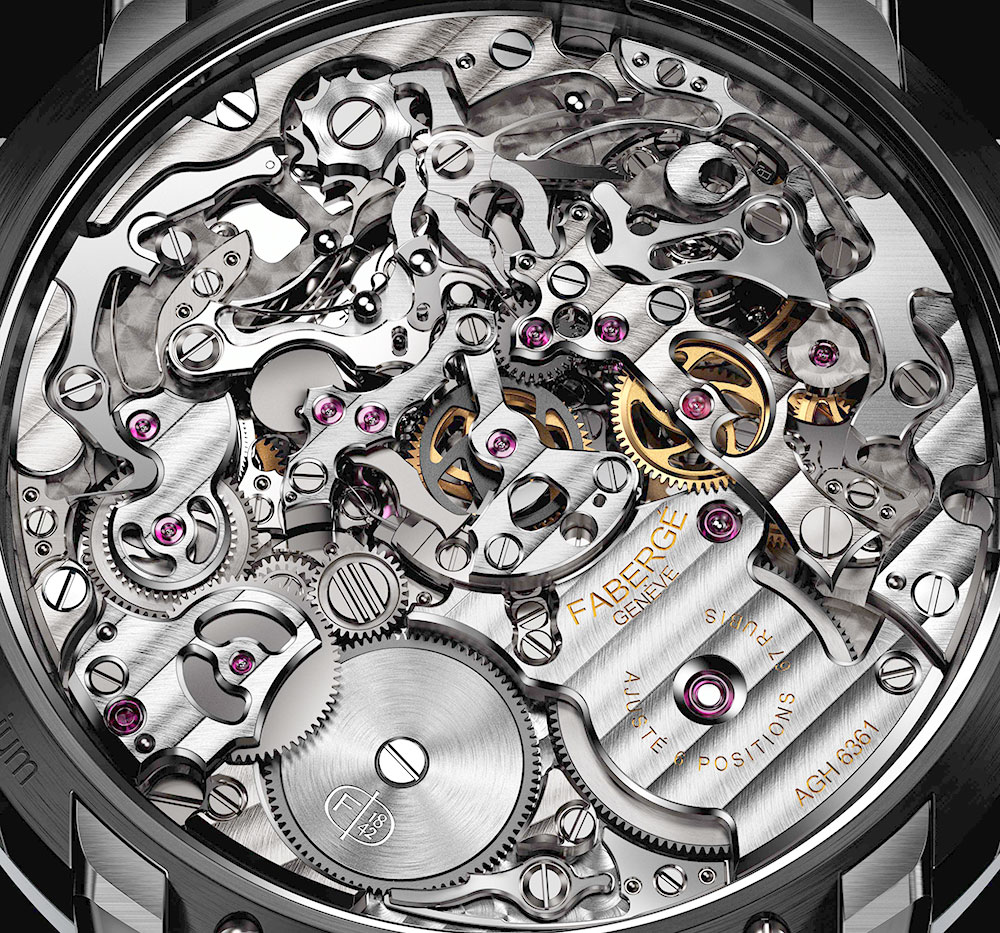 The movement is automatic and it is visible through the sapphire case back. However, you will notice that there is no rotor in sight. You see, the winding rotor has been designed to be on top of the movement so that nothing will block users from admiring the chronograph mechanism from the rear of the watch. In fact, the architecture of the AgenGraph is very unique. The going train actually sits in a ring around the center, and the center is where the chronograph module is. 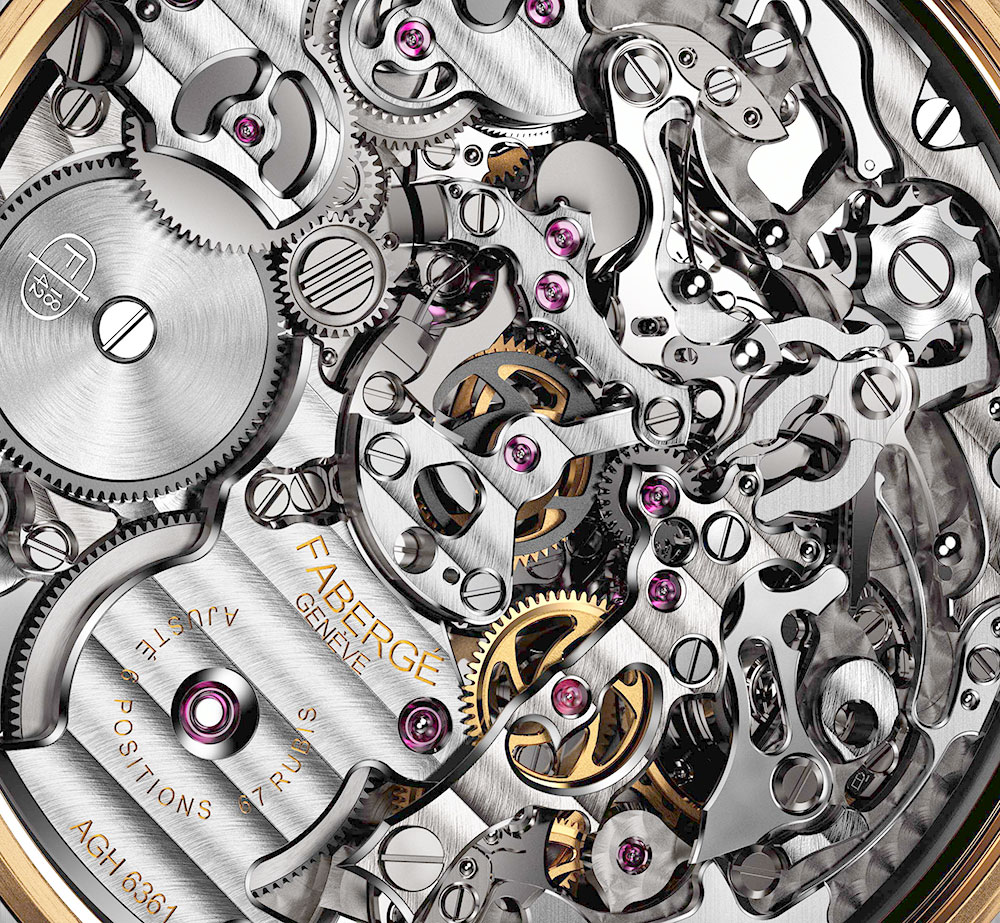 The AgenGraph also contains a brand new patented clutch called the AgenClutch, which claims to eliminate the disadvantages of traditional vertical and horizontal clutches. Instead of traditional teeth, this new clutch has a special rough coating that allows the central chronograph wheel and the driving wheel to connect without any jolting or jumping like traditional chronograph movements have. Another added benefit of this clutch is that very little pressure is needed to activate it, hence the pusher action should be very smooth and easy to operate.

The AgenGraph consists of 477 parts, 67 jewels, and beats at 3Hz. Power reserve is a very adequate 60 hours. It is also finely decorated, featuring circular graining on the mainplates, Côtes de Genève on the bridges, and hand-polished chamfers. 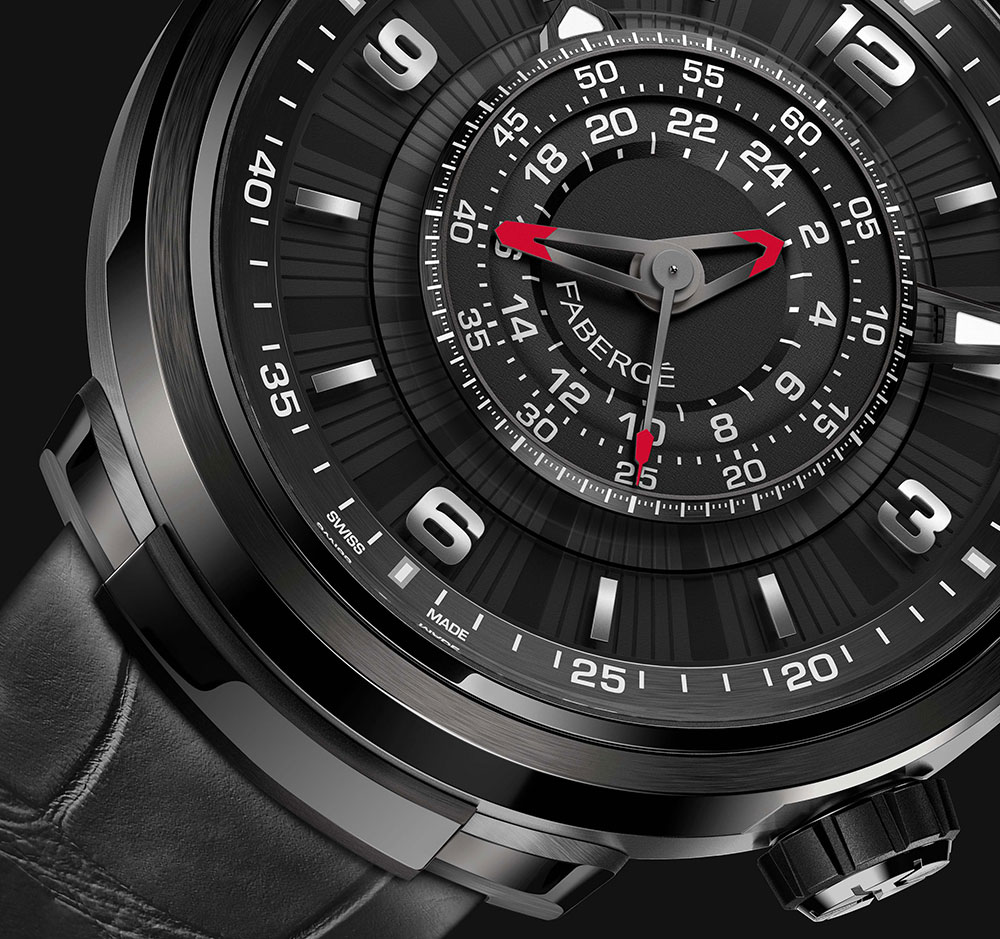 Thanks to the innovative moment within, the Fabergé Visionnaire Chronograph will be a landmark watch in the category of chronograph watches, and we can’t wait to get our hands on it at Baselworld 2017 later this month. For now, and based on what we know, the Fabergé Visionnaire Chronograph will surely be amongst the most technically interesting watches to launch this year. Price for the ceramic model will be $34,500 and $39,500 for the rose gold model. faberge.com