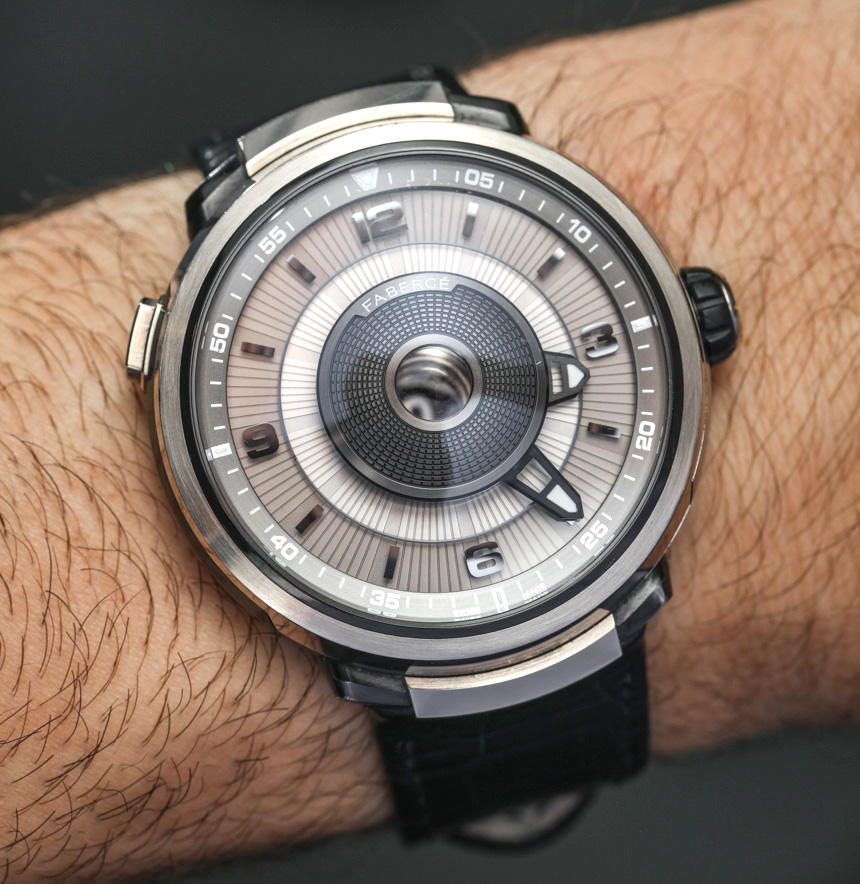 Even though the historic decorated-egg-maker Fabergé is a “luxury name” most people know, even many well-informed watch lovers have no idea that the brand is alive today and making wrist watches. The people running today’s Fabergé, which also produces women’s jewelry, have some very ambitious plans for their watches – which should be clearly evidenced by the modern-looking and technically unique Fabergé Visionnaire DTZ. 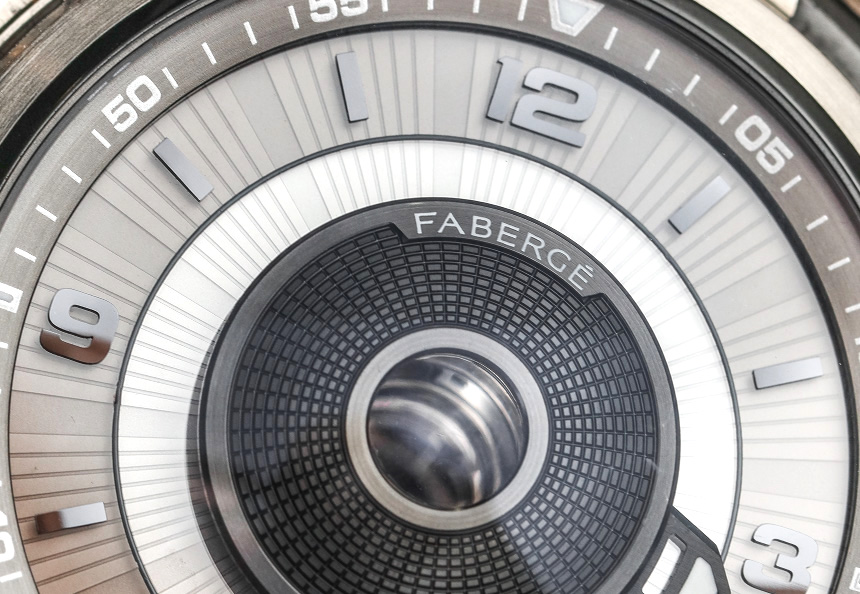 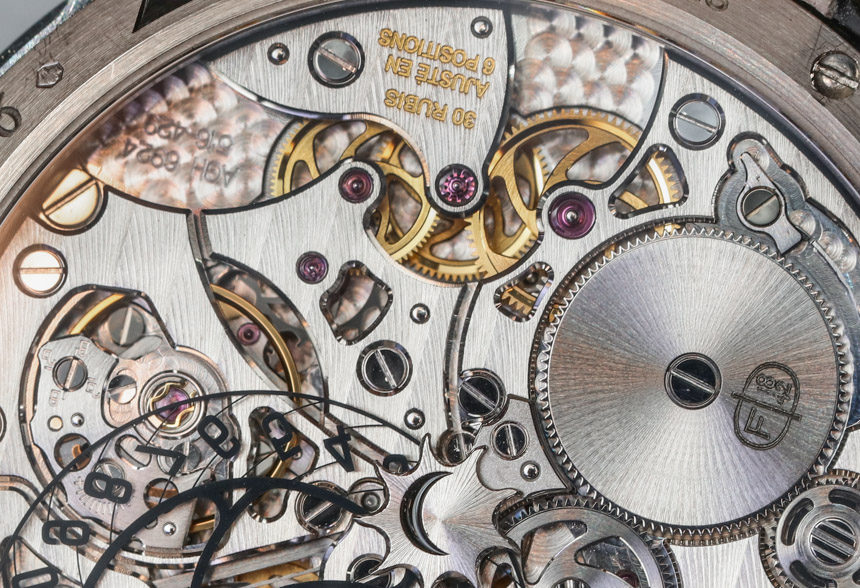 I got my first chance to play with this remarkable watch in Dubai during the second annual Dubai Watch Week where Mr. Jean-Marc Wiederrecht of Agenhor was attending as well. Agenhor is responsible for the movements in a number of interesting watches, even though they don’t produce their own watches (well, not yet). Jean-Marc’s company is responsible for the movement inside of the Fabergé Visionnaire DTZ – with DTZ standing for “dual time zone.” Previous to working with Agenhor, Fabergé released the Visionnaire 1 watch with a flying tourbillon produced by Swiss APRP. 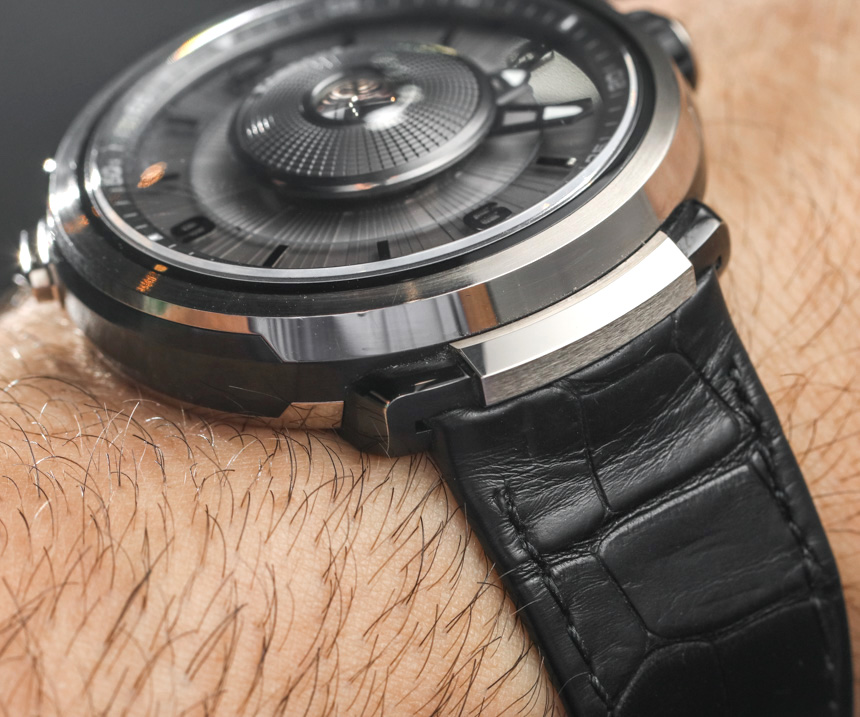 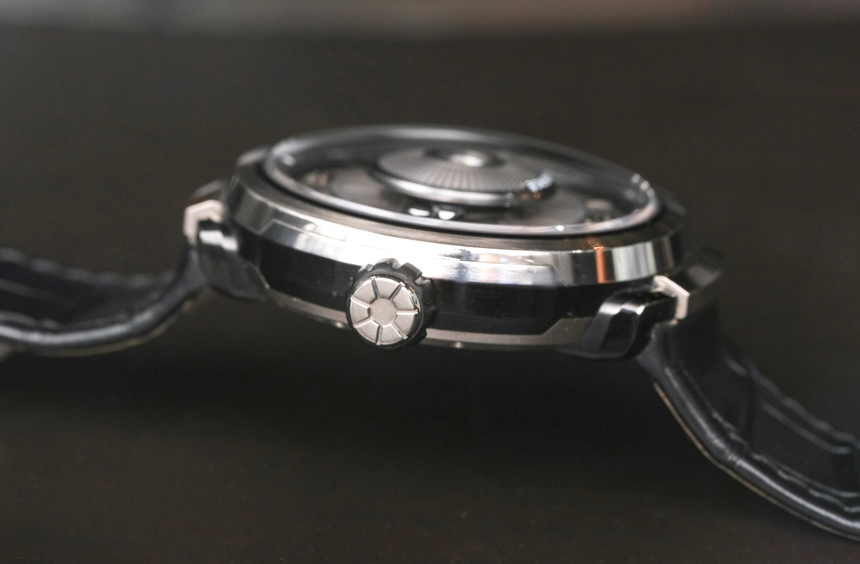 The Fabergé Visionnaire DTZ has a similar modern aesthetic design as the Visionnaire 1, but is much more accessibly priced. I think it is interesting that while the rest of the Fabergé brand is a lot more classic in its design, these two watch collections are made to look resolutely “in the now.” Wearing the watch, I can’t help but think that it feels like what Christophe Claret should be doing these days in addition to his massive money mechanical watch toys. Doesn’t the case design of the Fabergé Visionnaire DTZ look like something that would easily exist in the Christophe Claret universe? 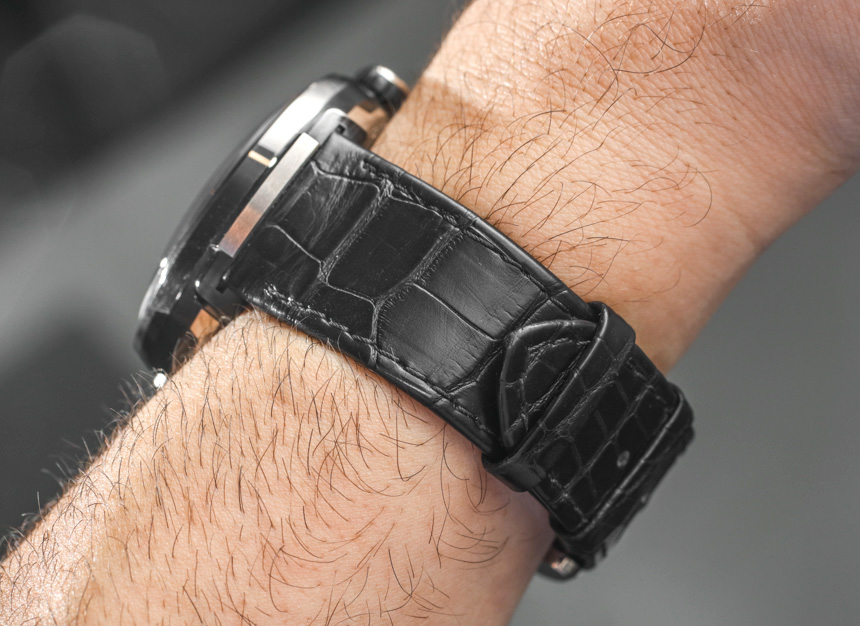 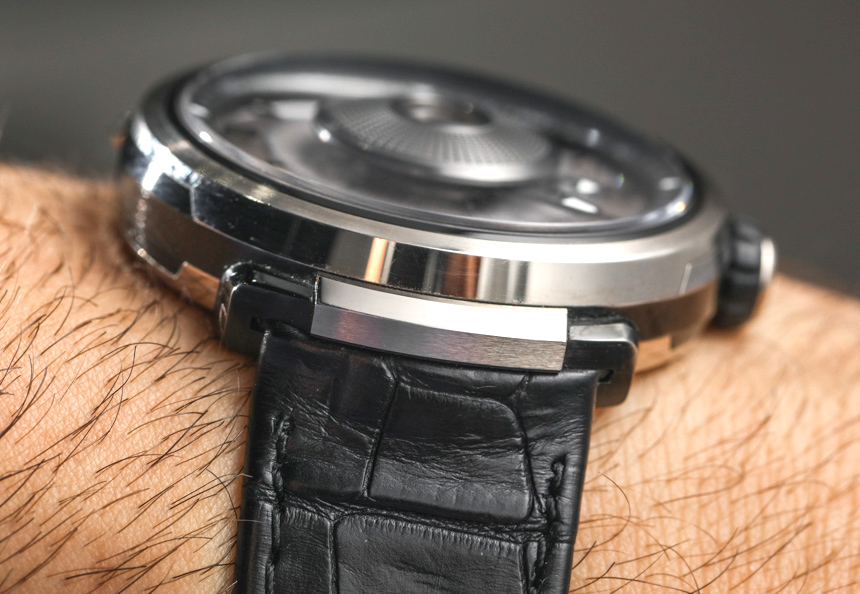 On the wrist, the 43mm-wide case with its funny-looking but clever lugs fits remarkably well. The case feels very practical in dimensions even if it is more spirited in how it looks. Fabergé currently offers two versions of the Fabergé Visionnaire DTZ in either the model pictured here in 18k white gold with black-coated titanium, or alternatively an 18k rose gold version with polished titanium. I think I prefer the 18k white gold model if only for the enhanced contrast between the black and silvery colors. 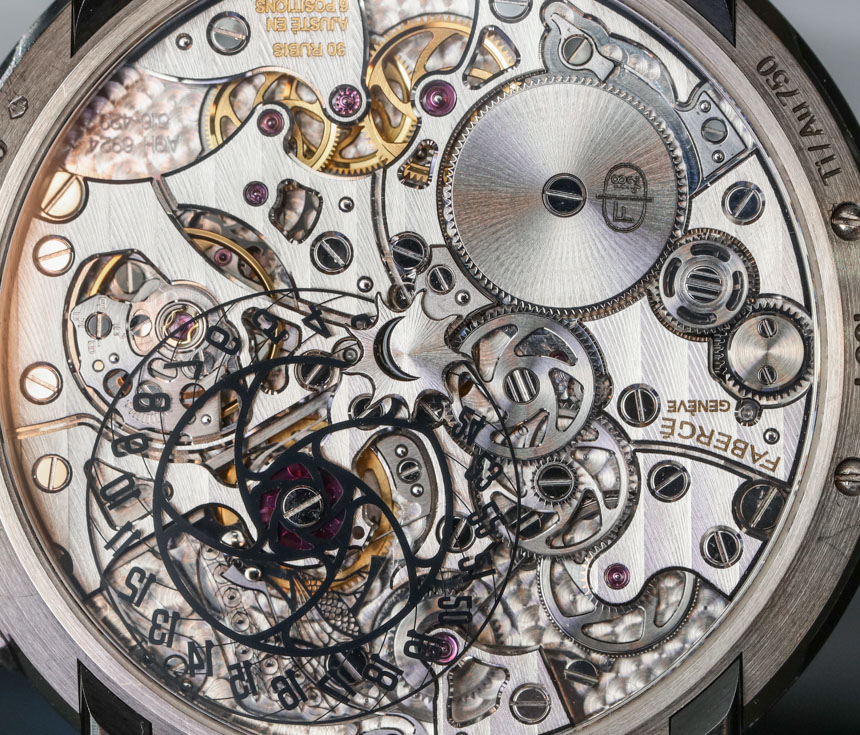 There are lots of little surprises in the watch – which is apparently exactly as Fabergé wanted it. One detail which I have failed to discover myself, is that there is a part on the movement which is supposed to look like a peacock. Another surprise is that the movement is an automatic, even though you could never tell from seeing the movement through the rear of the case. Agenhor designed the rotor to sit under the dial of the watch – a move which I think is both brilliant and needs to be adopted by others when there is a desire to fully display an automatic movement in its decorated, complicated glory. 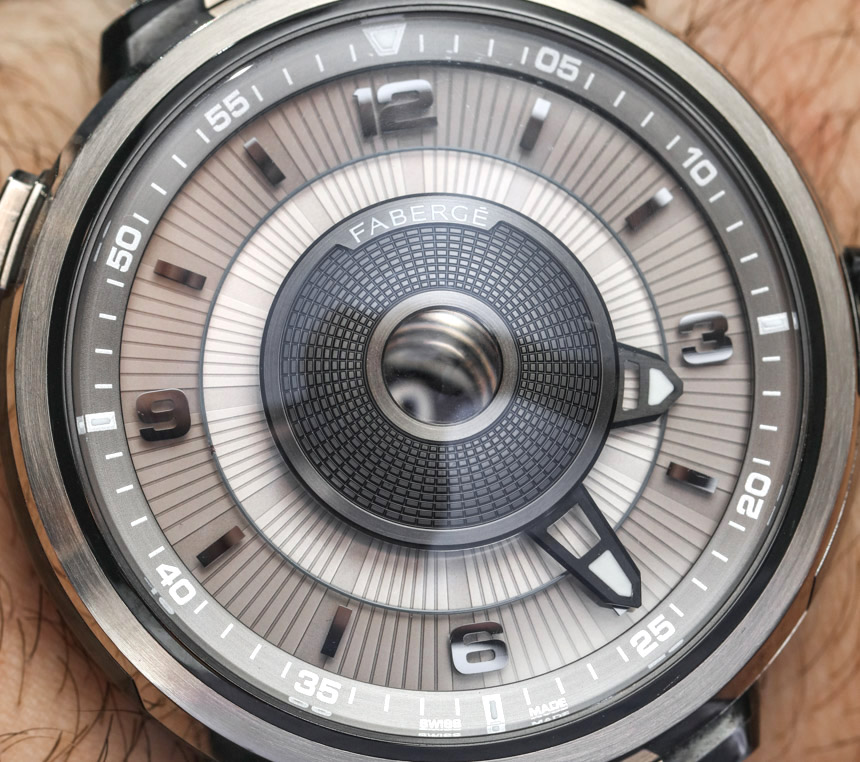 The surprise that you’ll learn about first is how to read the second timezone. You actually need to be looking dead center at the dial to view the small window which indicates the hour of the second time zone. It displays it in 12-hour format, but a full 24-hour disc for setting the second time zone better is located on the rear of the watch on the movement. 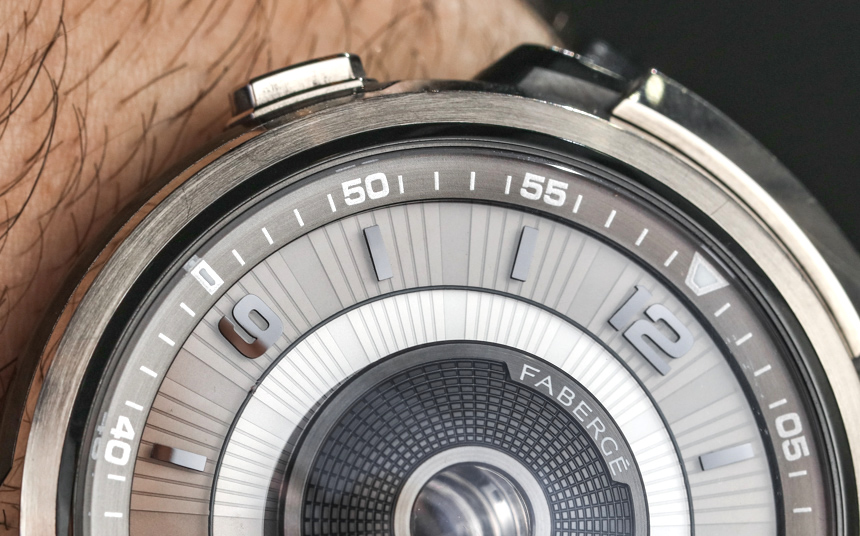 Yes, it is a bit odd that you can’t read the second time zone when looking at the dial from an angle. Moreover, the numeral on the disc is magnified a bit, making for a cool view when looking at it. Jean-Marc joked that only the wearer could know the location of where the second time zone was, and that it was the private piece of information on the otherwise visible dial. The pusher on the side of the case acts to adjust the second timezone in one-hour increments. It shares a minute hand with the main time. 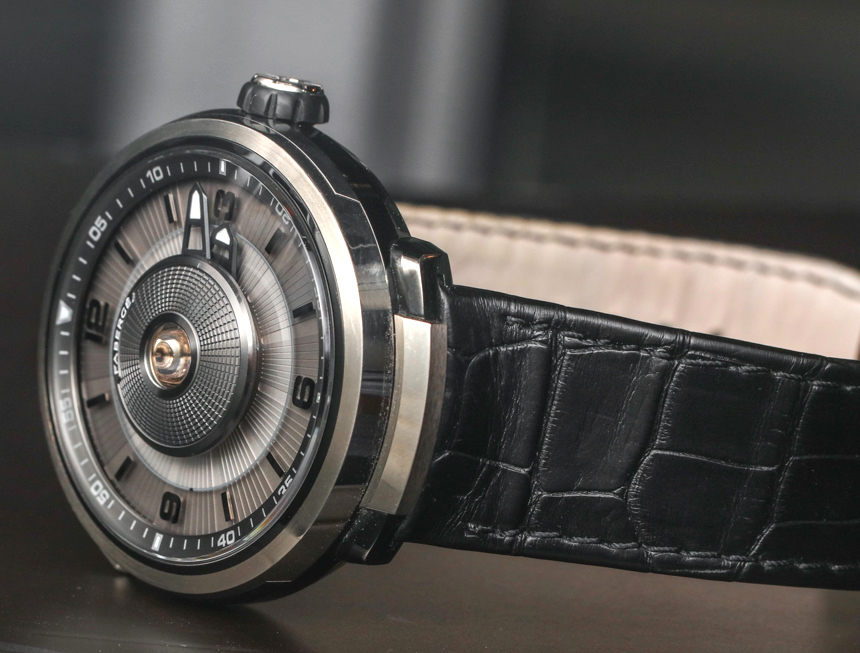 The placement of this central window for the second time zone clearly also needed space away from where the hour and minute hands were supposed to be. Therefore, the movement is designed with hour and minute hands which poke up from under a sort of canopy over the dial with neat guilloche-style engraving on it, and are mounted to a complex system of gears. 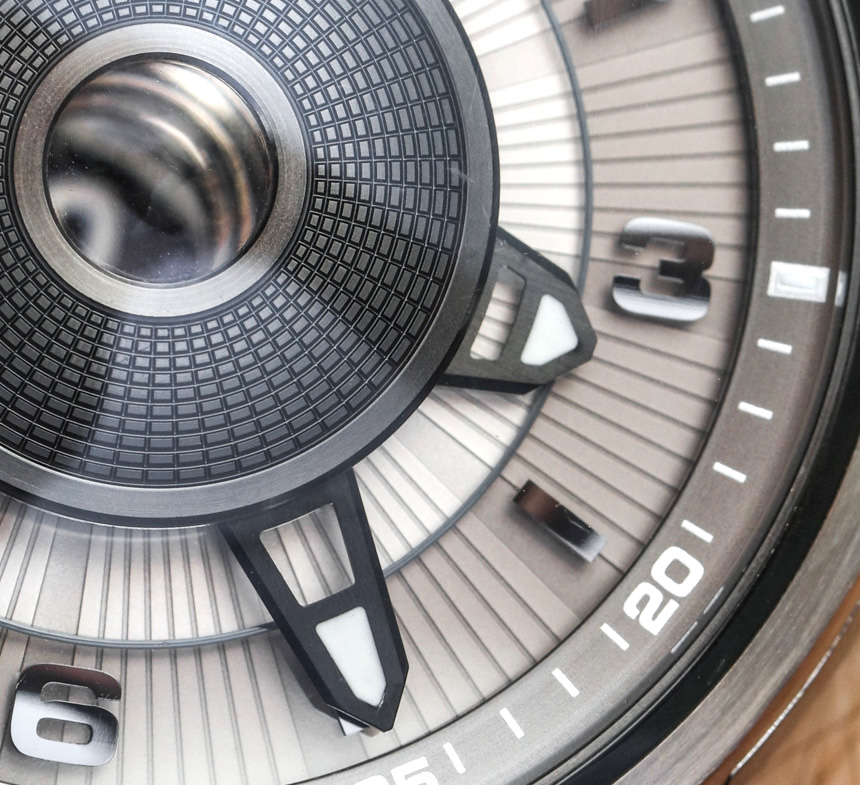 Fabergé did their best to make the dial of the Fabergé Visionnaire DTZ appear as mature as possible, but it nevertheless has yet to prove itself as something timeless. The look reminds me of how the dials on many Perrelet Turbine watches look. The dial does ask you to sacrifice some legibility, and some features (like the running seconds) for style, but in the watch world I can usually forgive that enough. 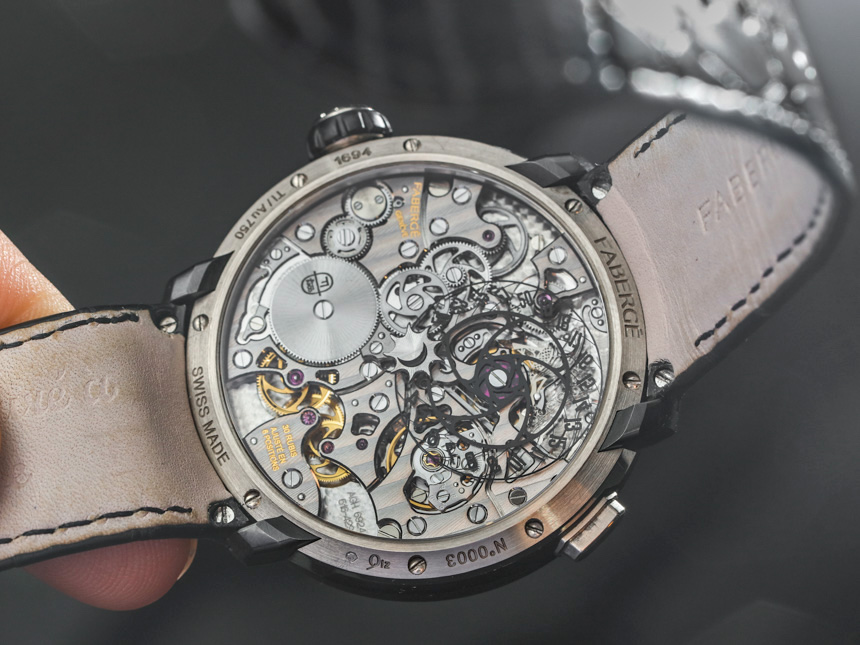 Fabergé calls the Agenhor-made movement inside of the Fabergé Visionnaire DTZ their caliber 6924, and it is produced from a total of 320 parts operating at 3Hz (21,600bph) with a power reserve of 50 hours. The movement is impressively complex for the price, and has a high level of hand-finishing and overall polish. I can’t see anyone turning the watch over to view its movement and being disappointed. 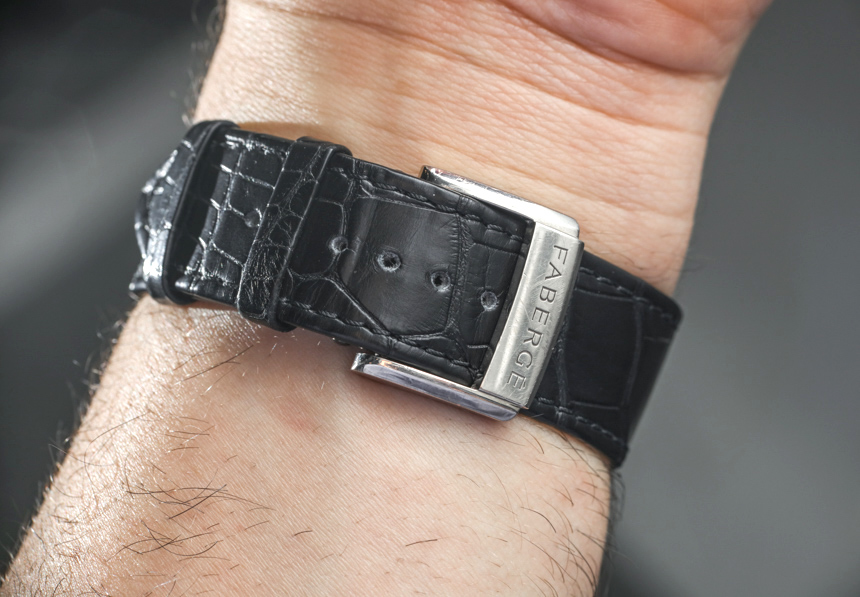 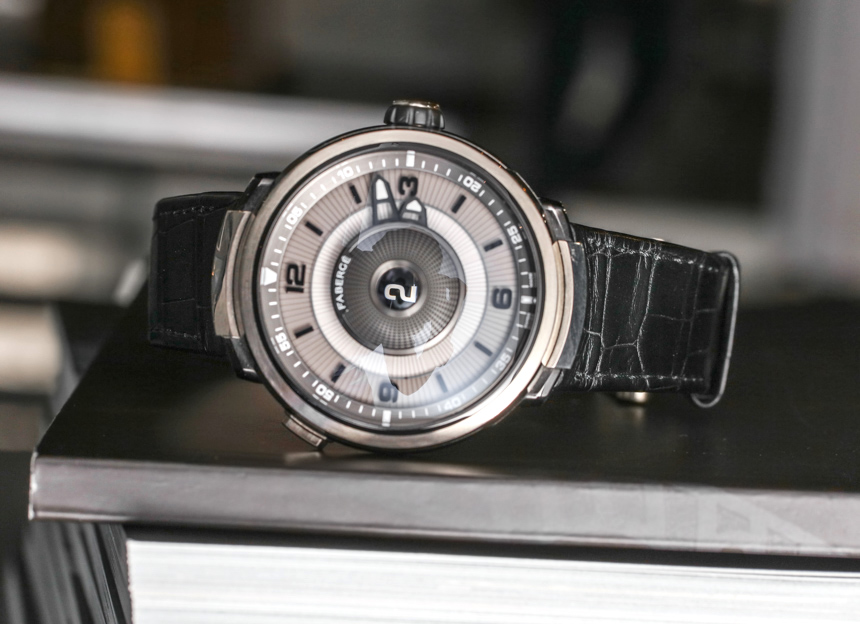 What Fabergé really needs to do is use better communication to explain not only what their “watch plans” are, but how complicated, contemporary designs like the Fabergé Visionnaire DTZ fit into that picture. Alone, without any marketing support, I appreciate the watch for what it is, but I actually don’t fully appreciate how designs or themes like this will continue into the future. There is a lot of potential here, and the watches themselves are quite cool. However, if Fabergé stays as secretive as they typically are, then it will be too much work for the average luxury watch consumer to discover let alone understand. 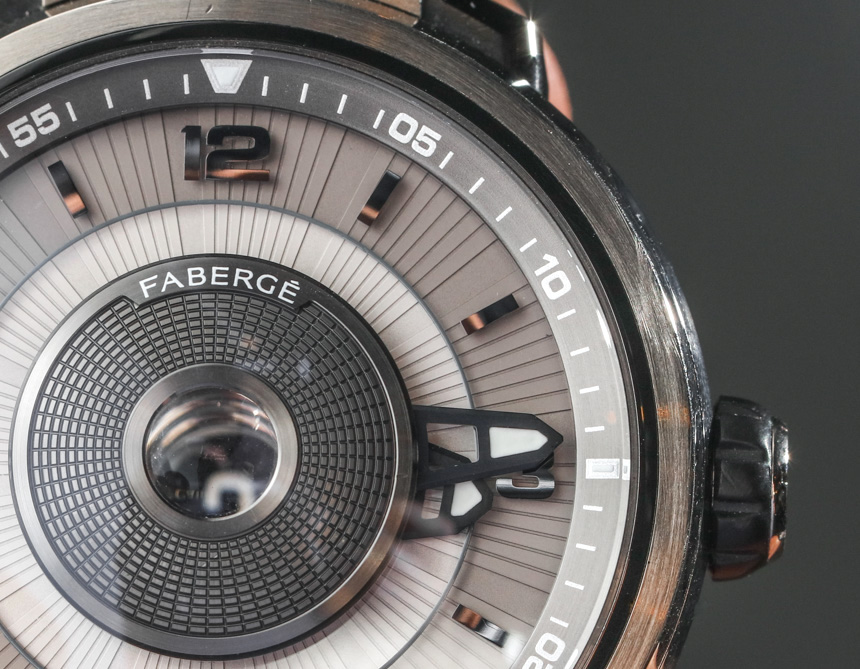 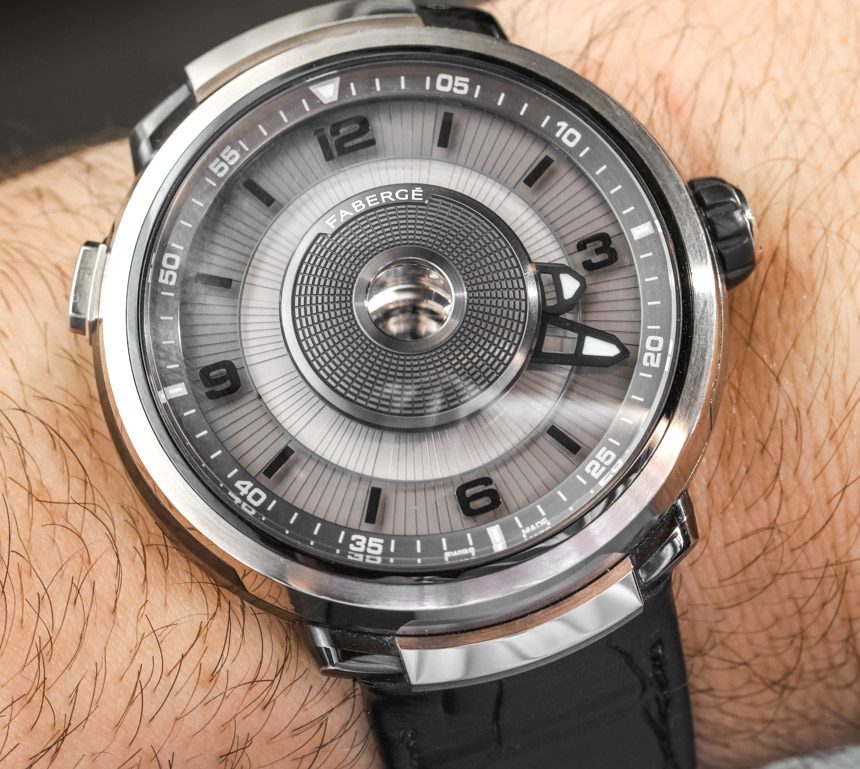 While the Fabergé Visionnaire DTZ watches aren’t cheap, they are well-priced for what you get. Further, they succeed in being actually distinctive with intentionally polarizing designs that will repel some, but be irresistible to others. Price for both the reference 1694/8 in 18k white gold and the reference 1693/6 in 18k rose gold is $29,500 – and you can even order them online, so it looks like Fabergé is getting with the times on multiple levels. faberge.com