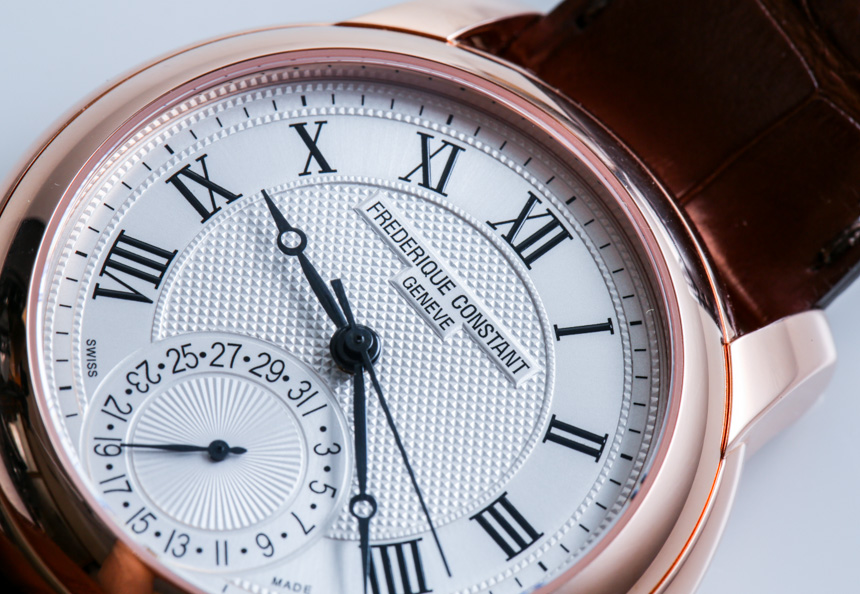 I was recently speaking about Swiss watches with in-house made movements and the question was asked “who else has manufacture movements made in Switzerland for prices as good as Frederique Constant?” I had to think about it and I really didn’t have an answer. With retail prices under $3,000 for legit Swiss Made mechanical watches, there isn’t that much else out there when you need or want something a bit more exclusive than an ETA. Not that there is anything wrong with an ETA movement, but they are common and those on the prowl for a high-end timepiece tend to prefer those with movements made by the brand themselves. So going back to the original question, I can’t really think of any other Swiss brands with in-house made movements starting at prices like this.

This little fact is a good start to what is a more long term review of the Frederique Constant Classics Manufacture ref. FC-710MC4H4 watch. We actually received this watch in late 2012, and this will be the second review aBlogtoWatch has published on the Classics Manufacture (we did so first here back in 2013). So why another review? Well for one thing this model is slightly different, having a PVD rose gold case versus a polished steel case. I also have a non-standard strap on this one. If the retail models look like they have a slightly different deployant and strap, that is because they do. We can’t claim that at aBlogtoWatch we never get to ask for custom stuff. But the real reason for a second review (in addition to the fact that I didn’t write the first one) is that I think this watch has not only aged well, but continues to be a good buy 1-2 years after its release. 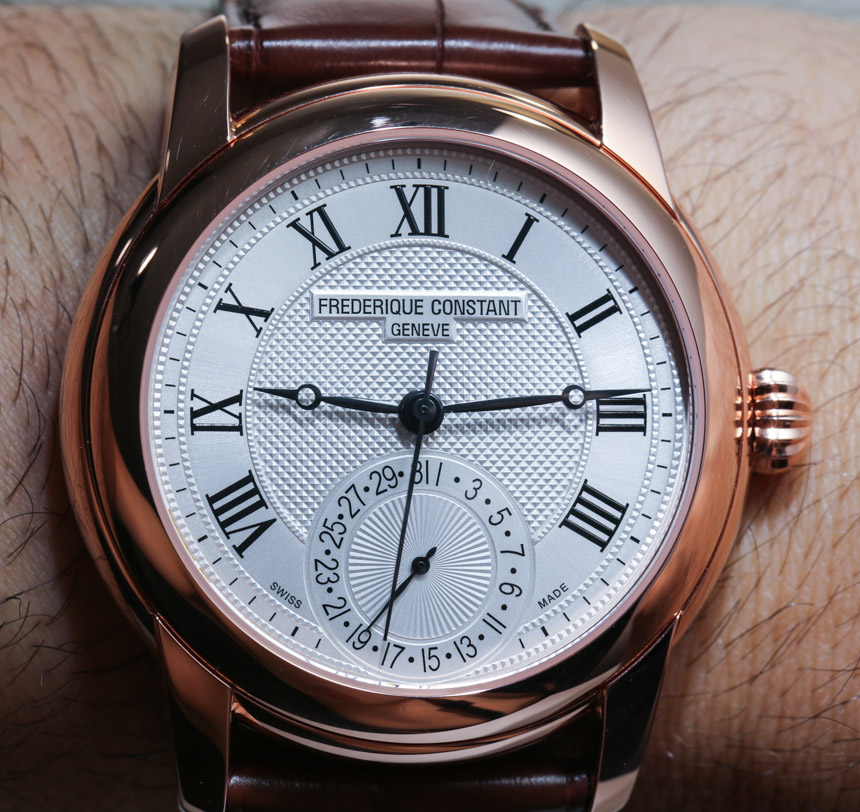 Frederique Constant, and its sister brand Alpina currently combine using both in-house made mechanical movements as well as sourced movements from ETA/Sellita. Watches with “Manufacture” in the title tend to be those which have in-house made calibers. Inside the Classic Manufacture is the Frederique Constant caliber FC-710, and it has been a pretty good looking work horse. The movement is an automatic with about 42 hours of power reserve and includes the time with central seconds and a subdial for the date. Some prior models look very similar but do not have a seconds hand.

Over on the back of the watch you can see the movement through the sapphire crystal caseback window. It is a very handsome looking movement and is actually very similar to the caliber FC-705 movement I made myself at Frederique Constant. I actually recall what I was thinking back when I first got the Classics Manufacture after turning the case around and being really impressed with the movement’s presentation. Use of blued steel screws and a nicely skeletonized automatic rotor gave it a look far removed from most base ETA automatics. I think your lay watch lovers will choose one of these if you compare it side by side with a Hamilton or Longines that has a more basic ETA movement. Frederique Constant overall did a nice job with them and I continue to feel that, for the money, all in-house made Frederique Constant and Alpina movements have a lot to offer. 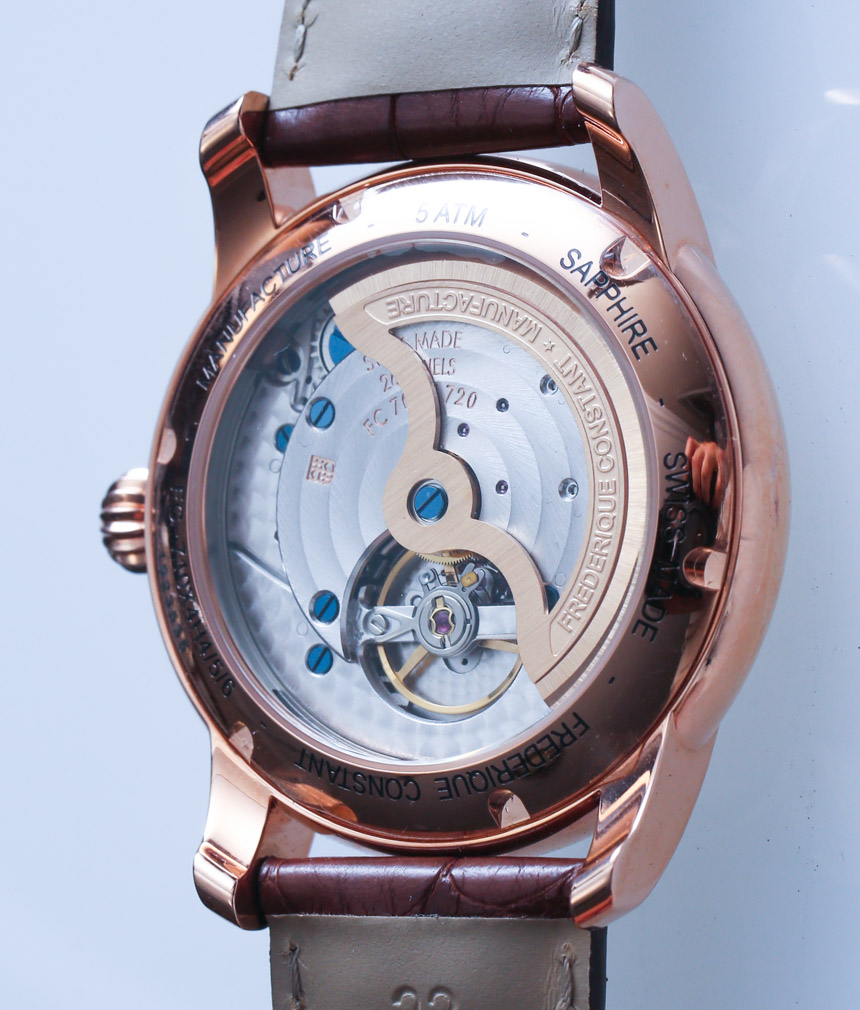 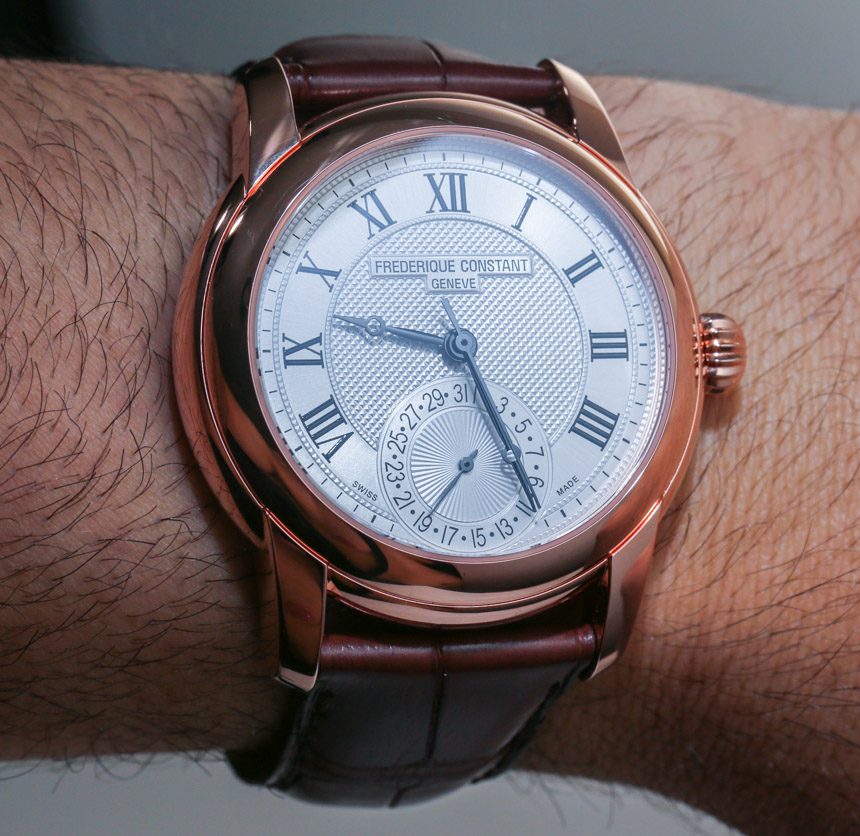 For some people, getting a Classics Manufacture will be completely based on its use of an in-house movement for the price. For others it will be mere icing on the cake. But unfortunately for many people it won’t even be something they understand. Frederique Constant is the type of brand that exists in a very interesting pricing category. For some people it is the ultimate watch purchase of a lifetime, for others it is pocket change. Frederique Constant themselves muse about this fact in commenting on the types of retailers that carry them. In some stores these timepieces are the most high-end watch available, and in other stores these are the good looking and safe budget buy (which is actually a “real watch”) that you get for a relative or friend after you go in to buy a new Patek Philippe, Vacheron Constantin, or Audemars Piguet for yourself. Watch lovers mostly understand this and I think the brand has a tiny bit of a “name challenge” as a result. What I mean is that Frederique Constant is a name that for me is synonymous with value and reliable style. When I want to recommend a good watch for a fair price I often mention them as part of a short list. If someone asks me about watches with high-end names that will impress social types, it is hard to compete with the Rolexes and Cartiers of the world.

That means that a brand like Frederique Constant will mostly appeal to knowledgeable watch lovers who know when they are looking for a classy dress watch or conservative sport watch – with an in-house movement or not – Frederique Constant is a quality choice. Honestly, I hope it stays that way. I don’t want the brand to start getting ideas about putting tons of money into marketing, raising their prices, and hope that they will upgrade their status by BSing people and abandoning the values that made them great. Countless other brands have done so – and I can’t say that they have all fared well as a result.  The good news is that I don’t think Frederique Constant will do this. Their CEO, Peter Stas, has a slightly different agenda if I can predict his actions correctly. He is sort of making a public challenge to the Swiss watch industry as a whole, showing consumers that as a brand you don’t need to charge a ton for a handsome, well-made watch. He is clearly a businessman, but there is something really noble in that mission.