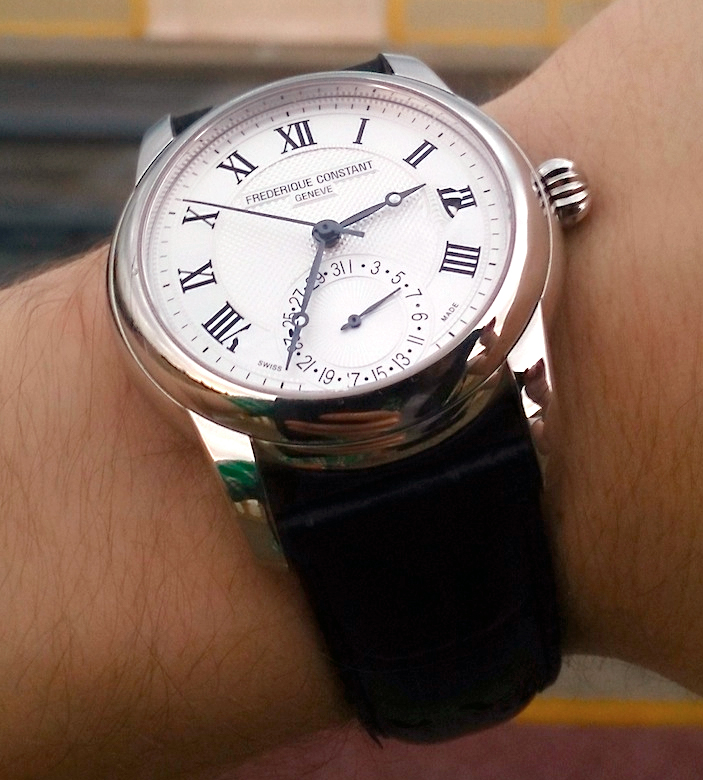 Raindrops from the oncoming storm on the FC-710MC4H6 Dial

A new, and most definitely welcome trend in modern horology is something Frederique Constant likes to call: “Accessible Luxury.” What that meant during the past 20 or so years is the expansion of a new market of timepieces built to high-end quality and aesthetic standards and equipped with fine mechanical movements.  The watch on review today is the FC-710MC4H6 Classics Manufacture and it was created with this very sentiment in mind. We are here to find out how it performs as an entry-piece into the world of high-end watchmaking and how successful it is at being the sensibly priced alternative to its much more expensive counterparts. 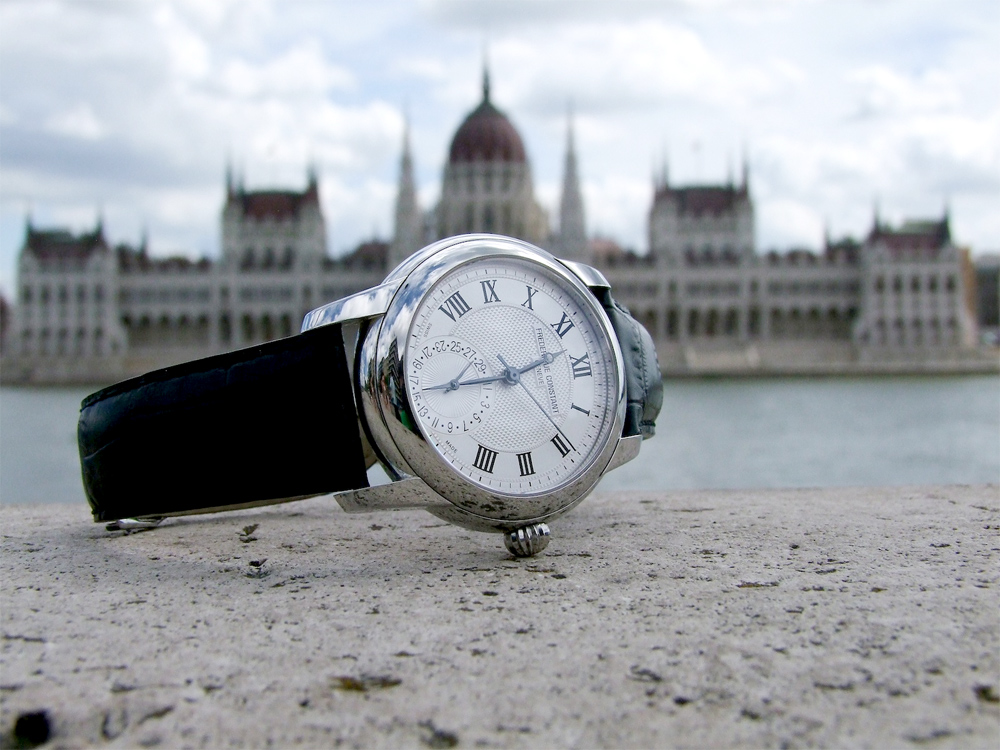 Frederique Constant is a relatively young company amongst fine watch making corporations. It is clear that in 1988, when Peter and Aletta Stas set out to establish their own watch making brand from scratch, their main objective was to create timepieces of high-quality while adhering to reasonable prices. At the time, this had been a fresh idea and it helped create a powerful new market – but that of course, did not happen overnight. Beginning with 1992, during their first years in the business, they sold only a few hundred to a few thousand watches annually  – but they were constantly reinforced by the market that they were headed the right way. Presently they manufacture about 120,000 watches annually, less than one-tenth of which is equipped with an in-house movement. 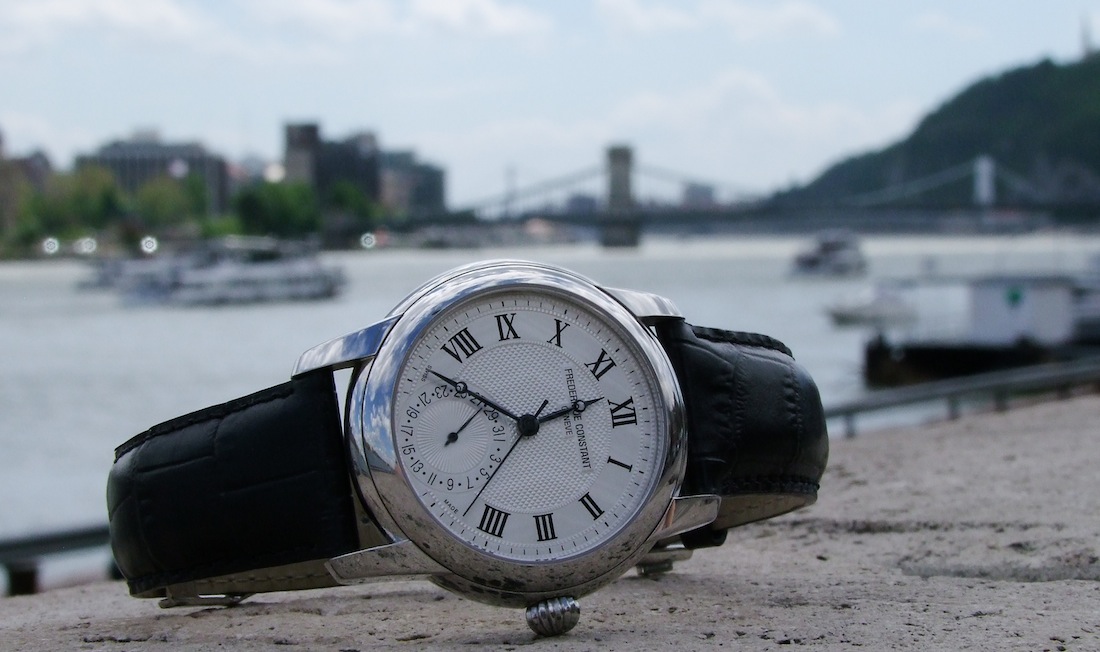 The first breakthrough leading to where the brand is today, came in 1994, with the introduction of their Heart Beat watches: the main feature had been the partial opening of the dial to make the balance wheel visible from the dial side. With the brand still having been fairly small they neglected patenting this unique design – and within a year several competitors created new models with the same or similar apertures on the dial. Nonetheless, the manufacture achieved great results year after year, with annual growth figures constantly in the range of 20-35%.

In 2001, in collaboration with three watchmaking schools, the brand set itself to the challenge of developing their first in-house movement, the Heart Beat Manufacture. The project came to fruition in 2004 when they introduced their first model equipped with their proprietary movement, the FC-910. This was a major, and vital step that is indispensable to earn brand recognition and authenticity. In the same year they announced the brand’s relocation to a new factory building in Plan-les-Ouates, in the outskirts of Geneva. Inaugurated in 2005, it is near the workshops of several horological giants such as Patek Philippe, Rolex and Vacheron Constantin. More about the manufacture from Ariel, who was visiting them the week this review was written! 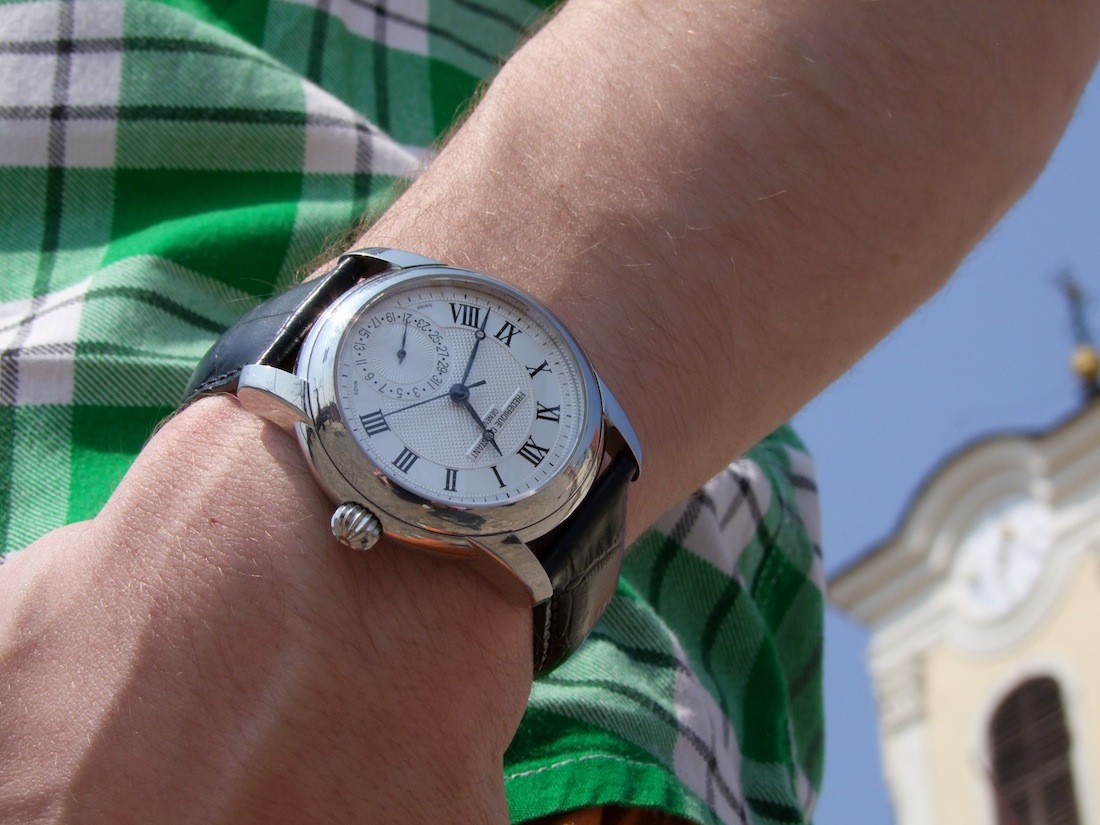 So, being familiar with the historical background, what can we expect from this in-house bred, classically elegant watch? Considering the price range, it is aimed at those about to enter the world of higher-end mechanical timepieces- for many it will be the first timepiece into which they have invested more seriously.  I believe clearing up what can, and cannot be expected from your first purchase into this ‘affordable luxury’ segment is the most important, and so that is what we are looking at first.

The FC-710 in steel retails for $2,595, which is not cheap. However, considering the overall market for fine timepieces, it is still relatively affordable. Compared to a plastic quartz three-hander it is horrendously expensive, but next to other higher-end mechanical watches equipped with in-house movements, it is competitively priced. Anyhow, it unquestionably is a luxury item. For the money one will expect quality in construction and also in the details – the dial, the case, the movement, and the strap. As strange as it may sound, I was expecting it to have many faces, to have the light play on the dial and the case – not just a schematic look. And of course it has to be able to be told apart from the more affordable – non-luxury item – counterparts after first glance. 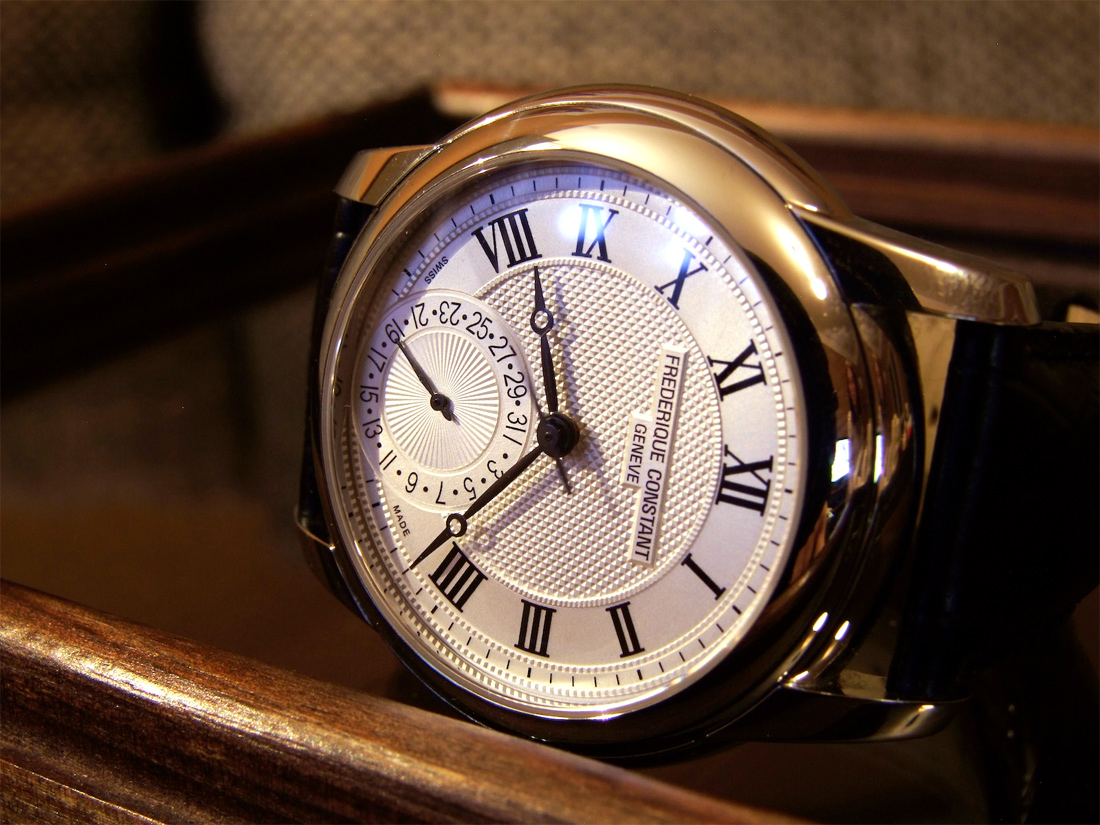 Frederique Constant had to understand, that for their target audience, there has to be a perceptible difference, and one at that which is powerful enough to justify the expense it took to step into the world of luxury items. The brand was founded with exactly this in mind, this is what they have been doing for over 20 years now – and that shows! Looking at the Classics Manufacture watch, it does make you forget the price, because there is way enough eye-candy to keep you busy and your thoughts away from comparing the package you got to the price you paid for it.

To begin with, the 42mm stainless steel case is extremely nicely polished. The side of the case, the bezel, the lugs all sport a very thoroughly done and evenly polished look, with no brushed elements anywhere. The downside of such highly polished parts is that they will collect hair-line scratches very easily, regardless of the care taken while wearing the watch. Luckily, stainless steel polishes very well, and these minor scratches do come out nicely once the owner wants to get rid of them. The front and back are both made of sapphire – the former has been treated with anti-reflective coating, while the back lacks this feature. The onion crown matches the classical aesthetics very nicely, although winding the movement with it could be more comfortable – I have to say I didn’t prefer the feel of it in the beginning, and although I never expected that to change, I do use it everyday and it doesn’t bother me anymore. 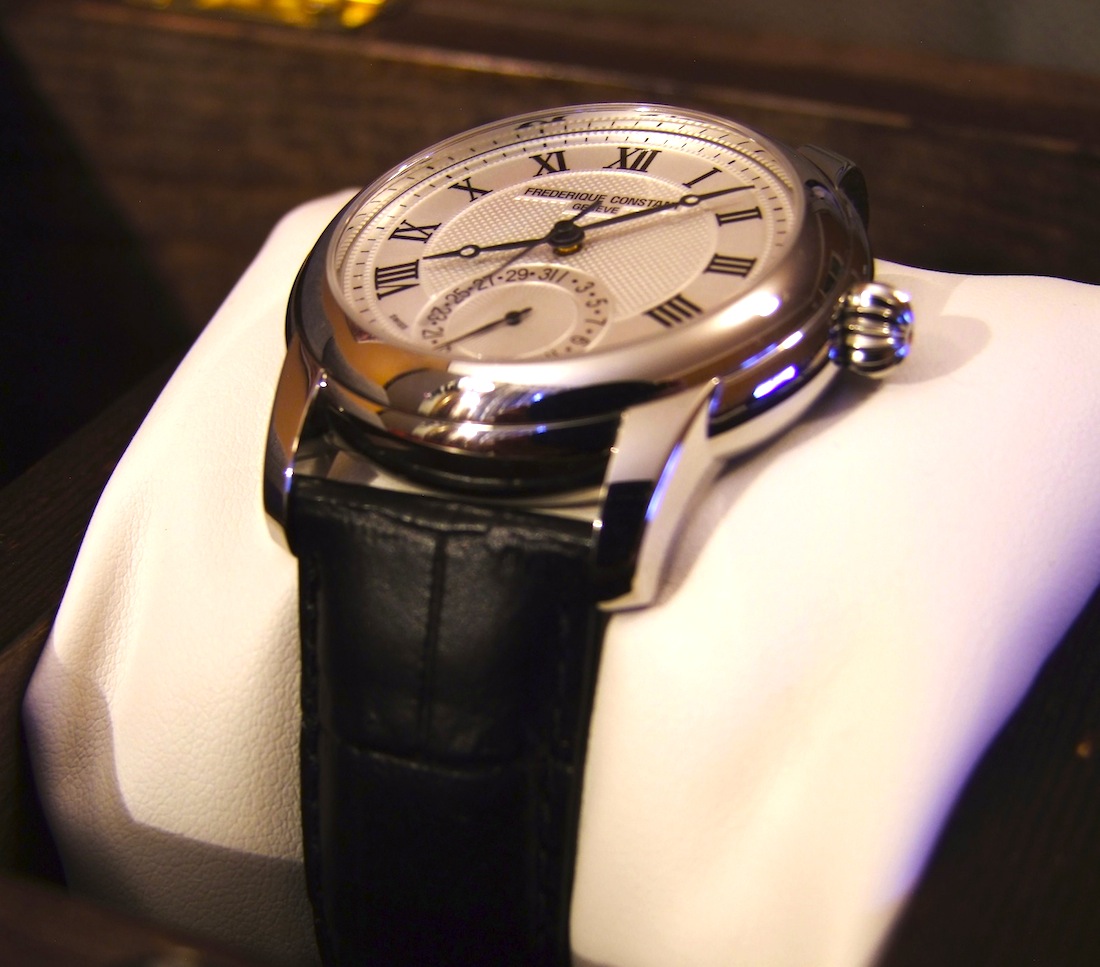 The dial basically is silver – at least that is what the manufacturer says – but it does show up in several fairly different shades. Occasionally it appears nearly completely white, sometimes it is a deep silverish in color, while at other times it has a beige tone to it. I learned that it highly depends on the lighting conditions such as direct sunlight, sunset, or when indoors – these all make for greatly different colors. It is a minor thing, but definitely is a treat to see the dial show up a little different every time.

It is decorated with different guilloché patterns: Clous de Paris in the center, sunburst for the date and two tracks on both sides of the minute markers. The patterns do look fantastic in person and while I am certain they are not hand-made guilloché, there still is considerable depth to the texture. At this price point – or even at much higher ones – the dial’s quality is extremely good. The hour markers are printed on – a bit of a shame because, from my point of view, this watch would have been absolutely perfect with applied hour markers. Scarcely it springs to my mind looking at the dial just how fantastic it would have been to boost the guilloché pattern with the applied indexes – I am sure though, that the price would have been affected by such enhancements. Legibility is good, reading the time with to-the-minute accuracy is easy apart from the 27-33 section where the date sub dial covers the minute-track. The oxidized, hand-polished black Breguet hands are well-proportioned and make the traditional atmosphere complete. There is no lume anywhere on this watch and hence it is not legible at night. 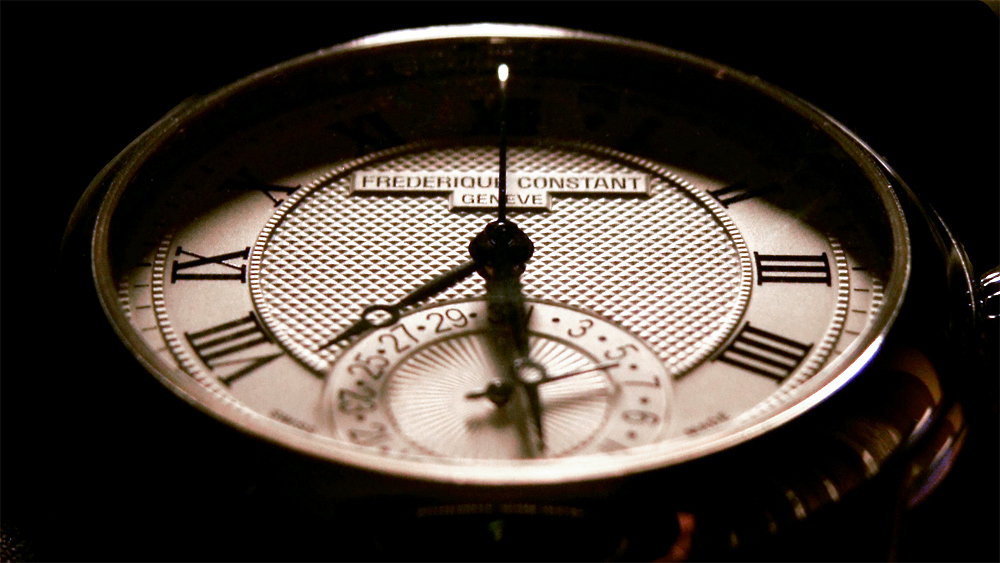 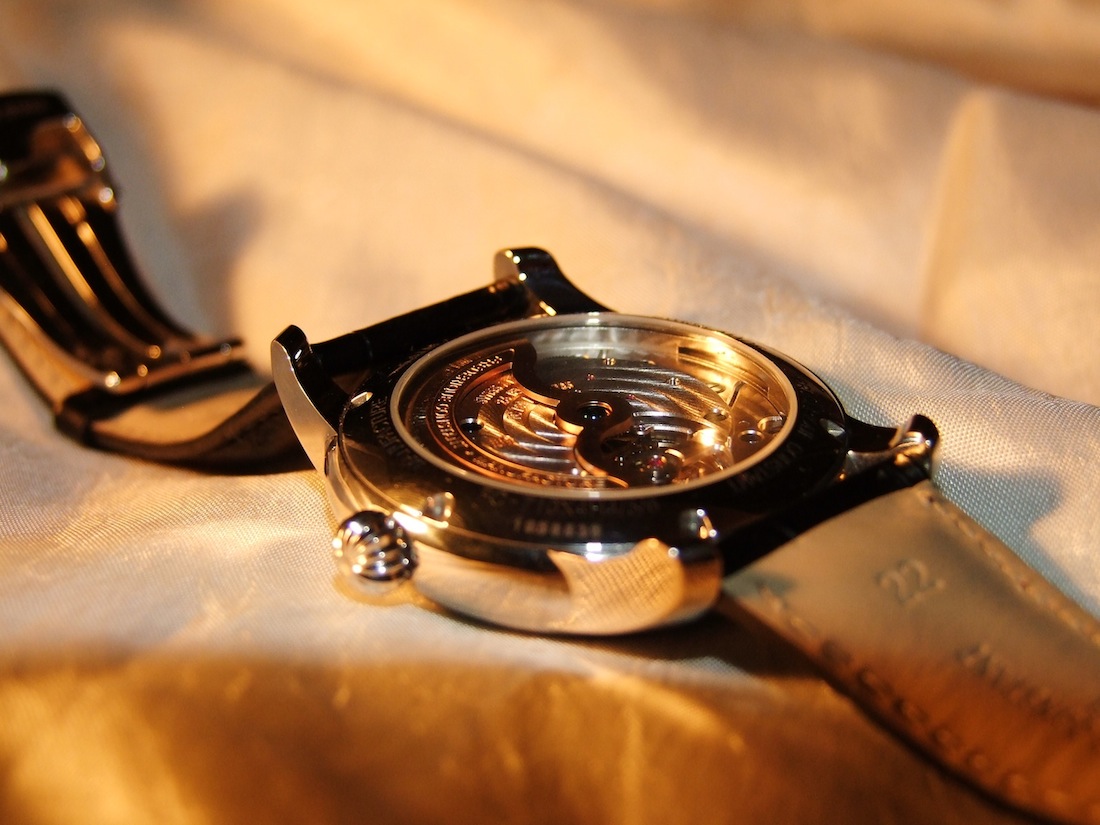 The movement looks and performs as well as could be expected from much more expensive timepieces. The developments of the FC-700 movement family began in 2008 and, introduced in Baselworld 2009, it is the second base caliber of the manufacture. The FC-710 movement, which we will be looking at just now, is the second generation of the FC-700 movement, the difference being an added central seconds hand. The manufacture clearly listened to the public’s feedback regarding the first generation, a most sorely missed – and now very welcome – feature is the central seconds hand. It completes the dial, and the overall look. The FC-710 movement, and the timepiece we are looking at now equipped with it, had been introduced in 2012.

The automatic movement has a power reserve of 42 hours – nothing crazy there – and its balance wheel beats at the pace of 28,800 vibrations per hour – a fairly high rate that improves accuracy. On day one I set the watch to my iPhone – which was daily synchronized – and after two weeks, the watch had been a mere two seconds off. This is extremely good (at night, I laid it on a table in the crown down position and fully wound it every morning when putting it on). The decorations on the movement are done beautifully: swirled côtes de Genève and perlage finishing had been flawlessly applied, while the skeletonized rotor is gold-plated with added weight on its peripheries for enhanced winding efficiency. I must say that all decorations and inscriptions are done wonderfully, nothing appears to be boldly or perfunctorily executed. 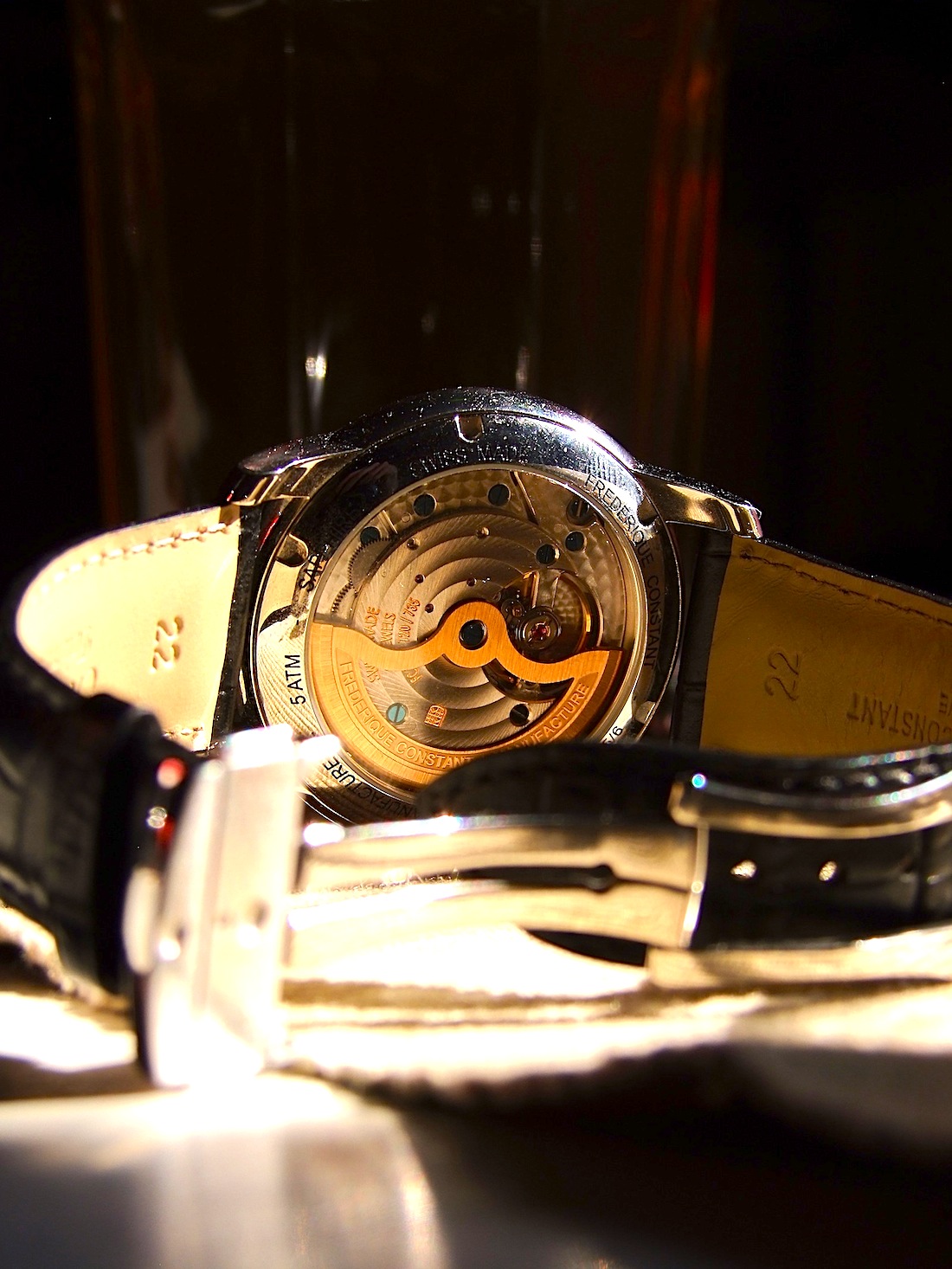 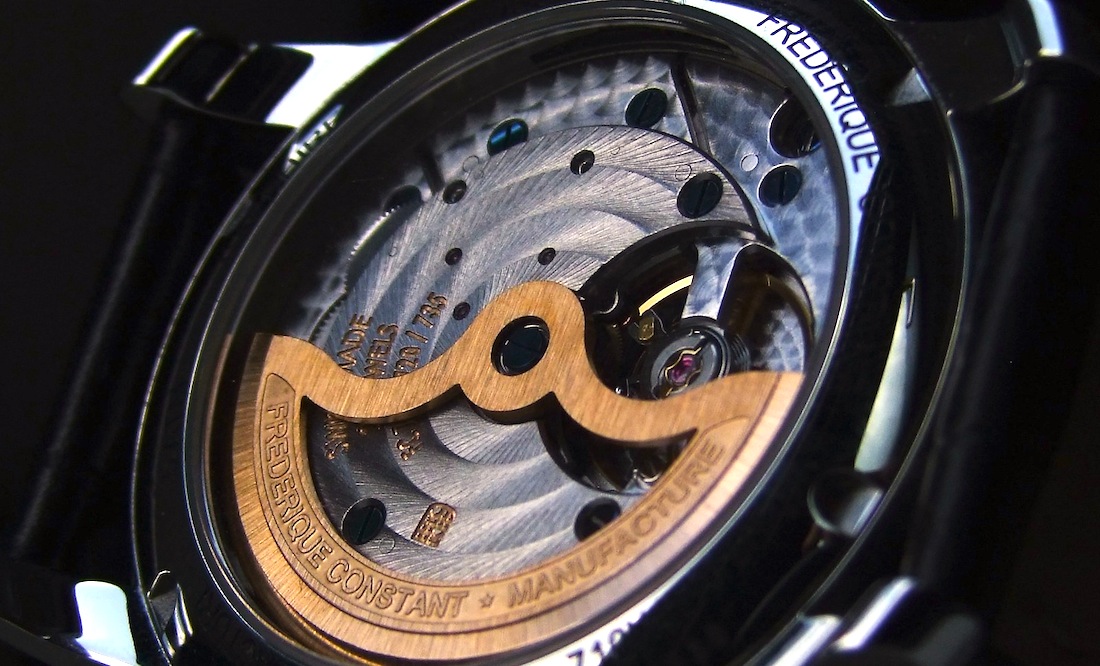 As for wearing comfort I can speak for those who have smaller wrists – I have been doomed with fairly small wrists, limiting strongly the watch real-estate and hence the sizes of timepieces that I can wear. The Classics Manufacture is 42 mm wide and is less than 50 mm from lug to lug. The wearability is defined by the lug-to-lug size and not the diameter: should the lugs extend beyond your wrist, it is an oversized watch and you have overshot! Luckily, even for my wrist, the case is a perfect fit. Something to note though: I had to punch another hole into the strap so that I could set it smaller, as the standard layout suits medium-large wrists only. A minor annoyance, and getting a smaller strap from Frederique Constant is difficult, to say the least. The strap itself is ‘croco-calf’, so it’s calf leather with a croc pattern. It has been keeping up better than I expected it would – I had been a bit pessimistic, but both the lining and the outside put up well with daily wear. The deployment clasp is superbly done, a real joy to use. It is just about identical to the one you will find on Omegas, apart from the logo of course. The finish is great, and it closes securely. The FC logo is raised from the matte inner surface and is done very nicely. 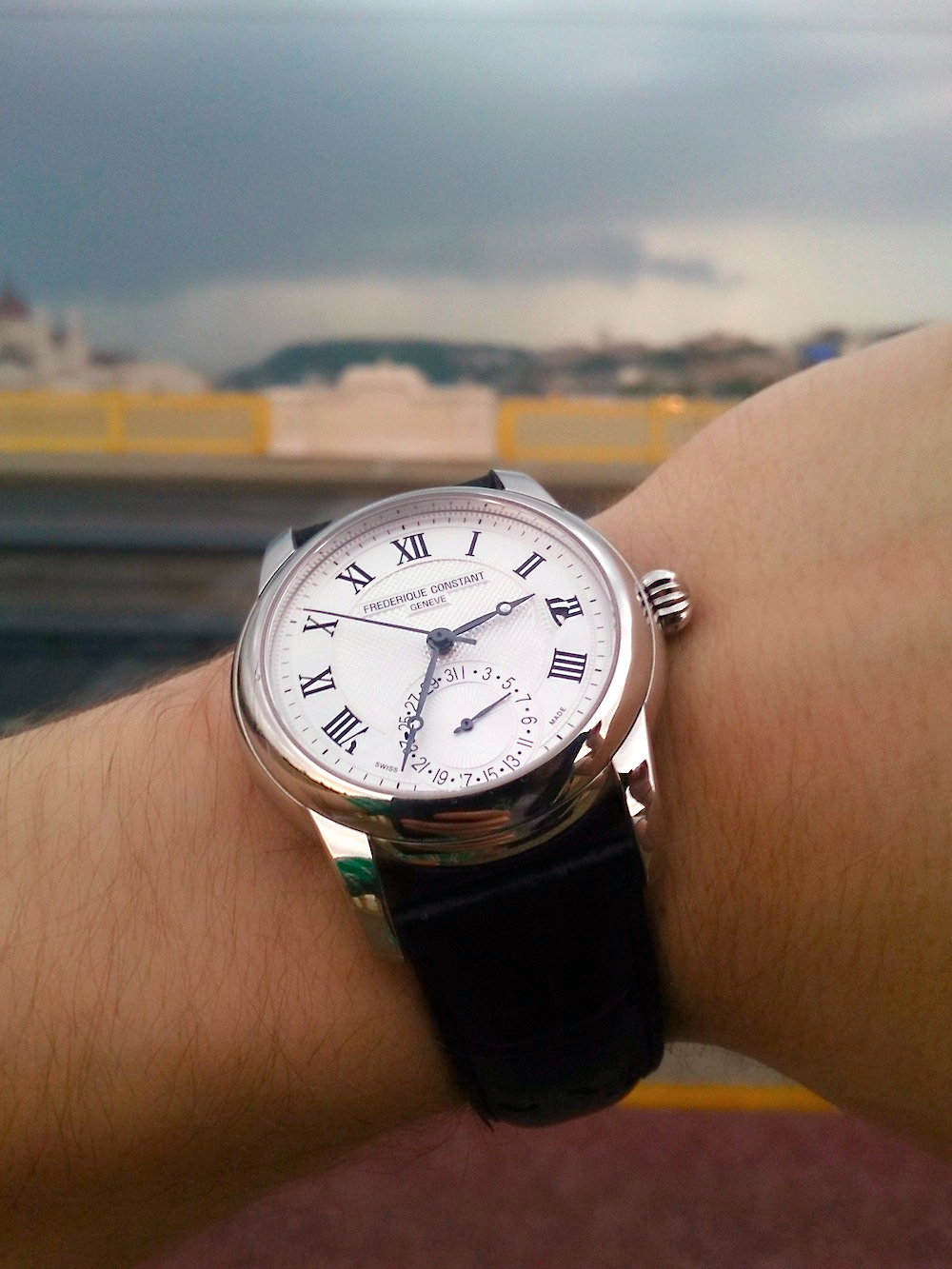 This seemingly discreet and traditional looking watch was created to tackle not one, but two difficult objectives. Firstly, it was designed to compete against much more expensive models of manufactures with a lot more experience and heritage. So, does it, as a complete package, mean tough competition? Owing to the attention to all the details, and its quality in construction, I can confidently say that it is a contender to be reckoned with. Secondly, it is also a watch that by many is considered as the watch with which they wish to enter the world of fine Swiss mechanical watch making (and perhaps the world of luxury itself). Now, after inspecting the watch in detail, would I recommend it as an item that is capable of meeting accordingly high expectations? Yes, definitely. Price is $2,595. frederique-constant.com 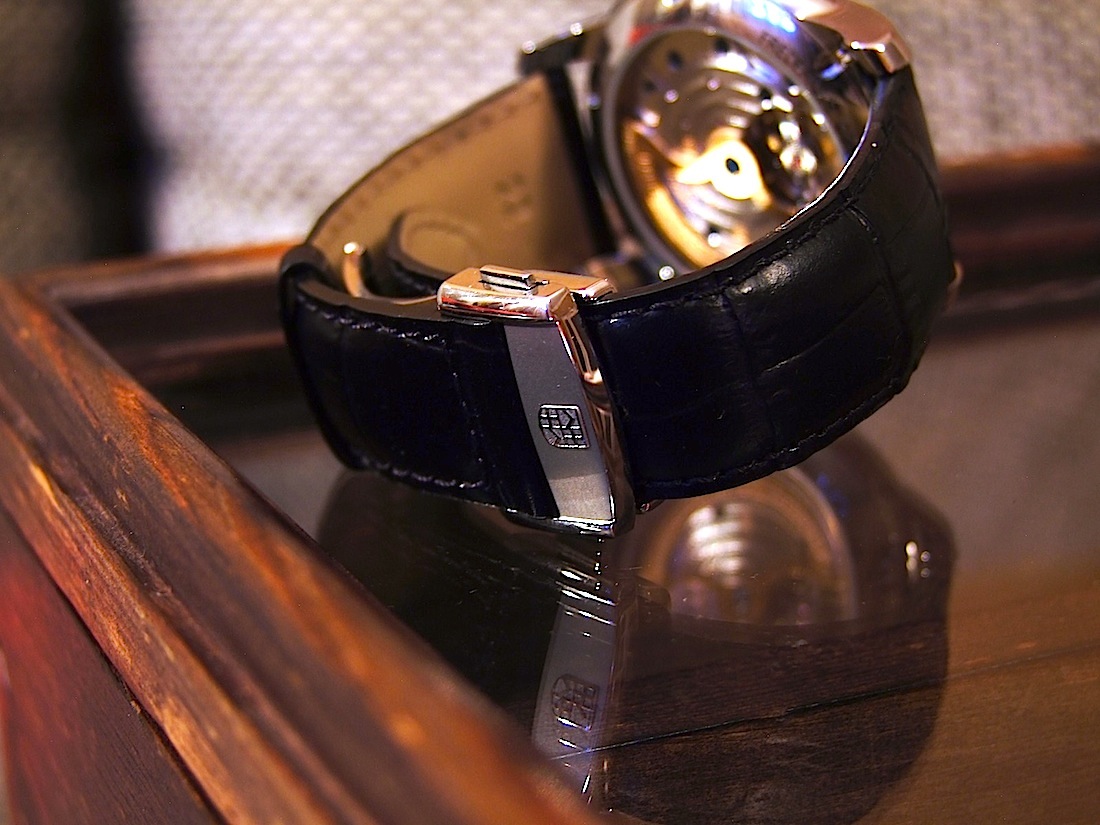