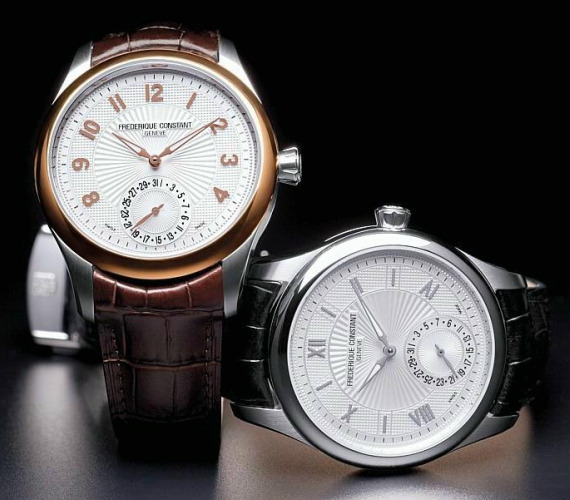 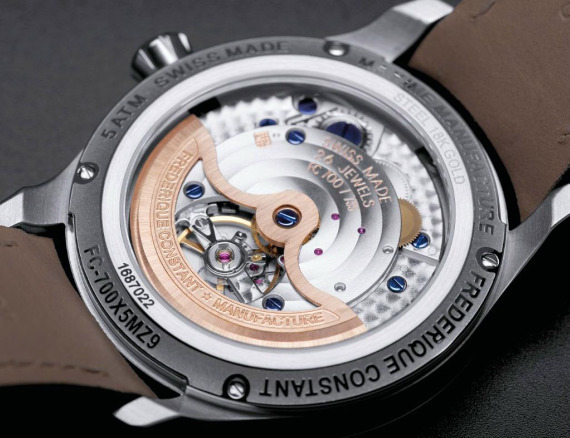 Frederique Constant has something to be proud about. At the very least it should be something that is exiting to fine watch consumers. While not the only company to offer relatively low cost in-house made movements, their new Maxine Manufacture Collection watches are beautifully made and feature a totally in-house made Swiss movement for under 2000 Euros. Typically the cost for in-house made manufacture movements is much higher.

The new movement is the FC-700 automatic, and is the accumulation of over three years of development. What surprises me is the look and feel of the movement. The focus on aesthetics in the layout of the elements (such as the placement of the balance wheel) is complimented by a level of decoration not expected at these modest price points. The gold rotor, perlage and other polishing, and use of blue screws makes viewing the movement a pleasure. Nothing makes me feel better than taking off my watch and showing it to a friend (especially those that don’t know about watches) – allowing them to discover an impressive mechanical movement visible through a caseback window.

On the dial itself the watch is simple but functional. The decoration again is well done, and the 42mm wide case is a good size. Typically new in-house movements are framed modestly until more and more complications can be features. Still, the dial features a healthy level of guilloche machine engraving, and the applied Arabic hour markers really make the watch feel substantial. Further features like a classically styled tapered crown and curved alligator strap that matches the shape of the case with no gaps are features found on watches costing a lot more. The style of the watch is prefect for anyone looking for a nice sober design that will look good for year, but doesn’t want to call too much attention (but would rather appreciate the subtle benefits of a good watch). I also think that the watch would be good as an entry to luxury watches for anyone. This are things that Frederique Constant are particularly good at, even as they continue to develop their product live.