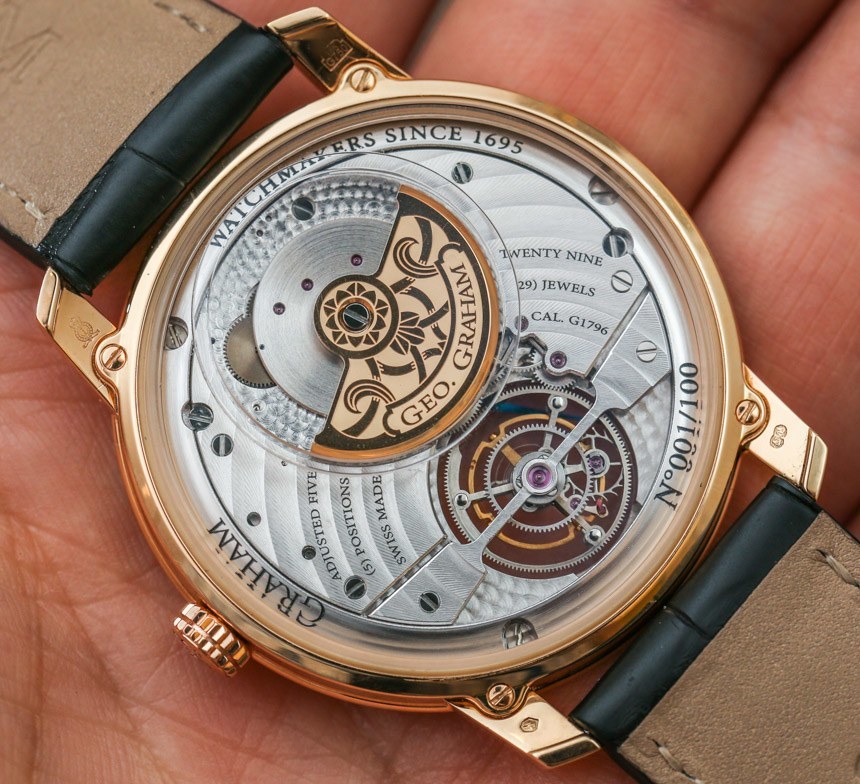 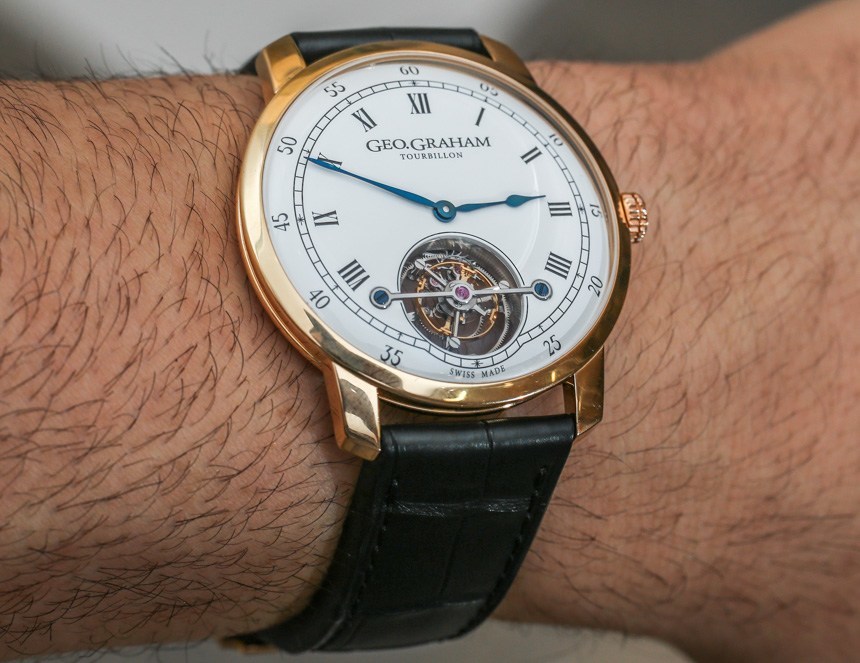 I can certainly understand why brands like to diversify their products and fight the sales war on all fronts, but sometimes, I wish they’d just stick to what they’re best at. Graham, the Swiss-owned, English-inspired brand have recently released the Geo.Graham Tourbillon, which is a simple, smart, and straightforward watch that is quite delightful to look at (see our release writeup here). But it doesn’t look like a Graham to me, at least not like the crazy-crowned sports studs they’ve been churning out for the last few years.

When a brand is born, it needs to set itself apart from the crowd somehow. Sometimes, it doesn’t take much. Maybe something as simple as a colour scheme or the shape of the seconds hand; maybe something more arresting, like a novel case shape or obvious movement modification. It doesn’t really matter, as long as it makes the brand’s wares instantly identifiable and consistent with the brand’s ideology. But setting out a clear ideology and brand identity is, in my opinion, imperative. 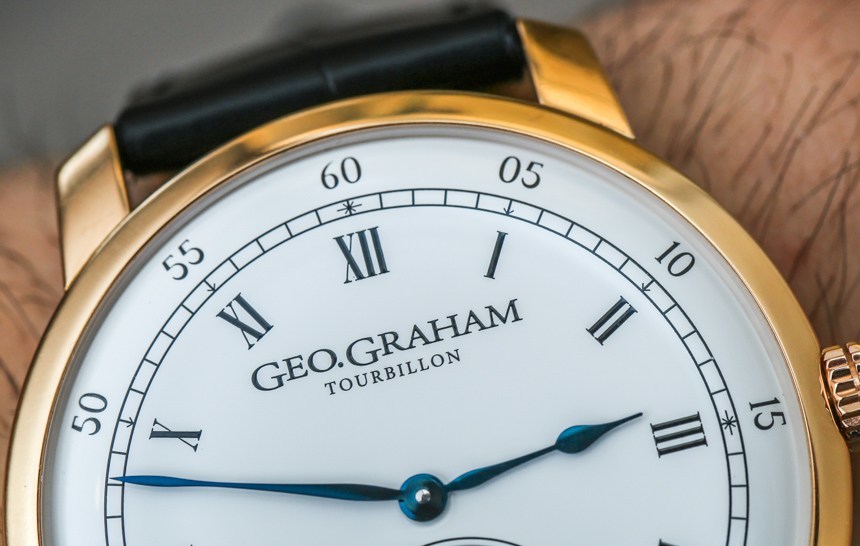 Since its relaunch in 1995, Graham has been known for its wild and jagged sports watches, typified by bold colours and ludicrously oversized crowns and pushers. It has as many haters as lovers, but you don’t need to get the whole world on side to have success. However, Graham was not always a sports watch company. Its origins stretch way back into history, and fall at the feet of George Graham, English clockmaker extraordinaire. When we delve into the foundation of this duplicitous company, its identity becomes blurrier still.

George Graham started producing clocks in 1695. Throughout his life, he made many meaningful contributions to horology. He made improvements to the pendulum clock, as well as inventing the mercury pendulum and the orrery. But perhaps his greatest contributions to our field were his words of wisdom, passed on to his younger contemporaries Thomas Mudge and John Harrison, both of whom would go on to become even more famous and respected than their esteemed forerunner. 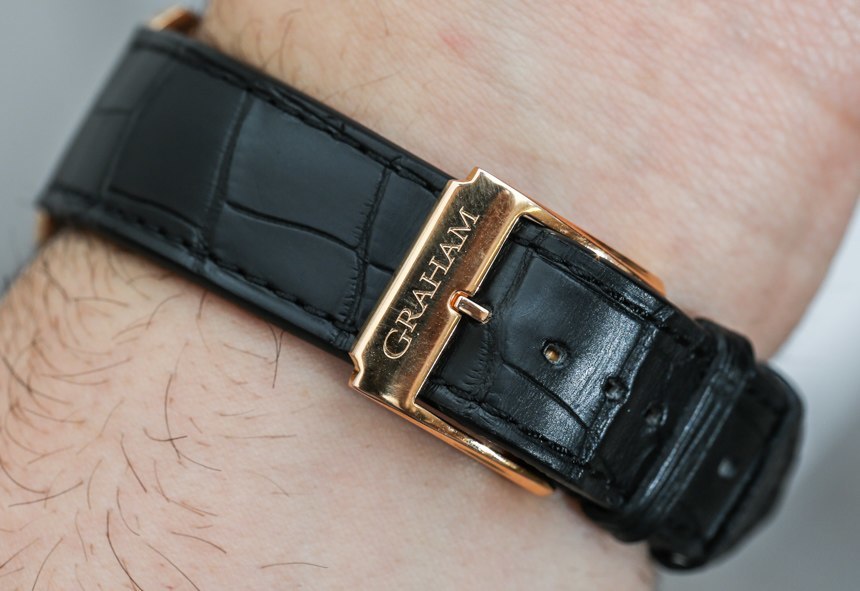 But then Graham died, and very little was heard from his brand for almost 250 years, when, in 1995, the brand was relaunched by a Swiss company that had bought the rights to the name. At this point, having gone to the trouble of buying up the name, you’d think they’d set about honouring it by producing watches of which Honest George Graham would have approved.

Then again, launching a highly distinctive, in-your-face sports watch that captured the Zeitgeist and continued to separate customers from their cash for the following twenty years of growth seems like an attractive plan of action when all you care about is making millions. So I can see both sides of the coin: either honor the name you’ve inherited, or make it into something totally new and consistent with itself. If a company goes with the latter then you might question their motives (they might just be using a respected name to add unwarranted gravitas to a substandard product), but it is possible they have a genuinely good idea that deserves recognition. Lifting the name of a past master certainly grabs the horological community’s attention! And I do think the modern Graham watches are valid additions to watchmaking. The Chronofighter in particular is a highly identifiable model, and the Prodive (in yellow) is one of my guiltiest pleasures.

In fact, I like the new Grahams so much, I am happy to overlook that somewhere, deep in Westminster Abbey, the man whose name now adorns the dials of these twenty-first century freak shows, is spinning in his crypt. What I struggle to get on board with, though, is being reminded of that man. I don’t like a brand that has done so little to perpetuate its “history” does so only when it seems to suit it. 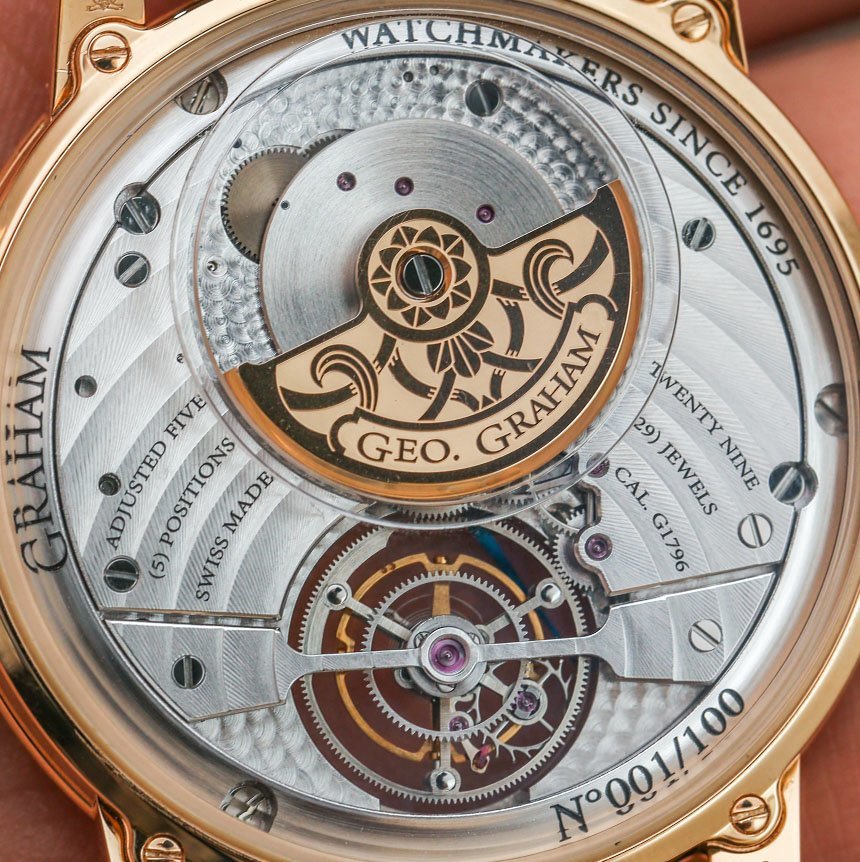 The Geo.Graham range features three watches, each one designed to celebrate George Graham himself. Each of the three – the Geo.Graham Tourbillon Orrery, the Geo.Graham Tourbillon, and the Geo.Graham Moon – features a tourbillon, which I’m sure Graham would have liked to see. Unfortunately, the tourbillon wasn’t invented until nearly 50 years after his death, so he never got the chance. Still, the idea is valid. We associate tourbillons with the past, and Graham’s legacy is certainly more closely associated with a nice, classical complication than it is with the petrol-coloured case and bog-eyed display of the Swordfish model. 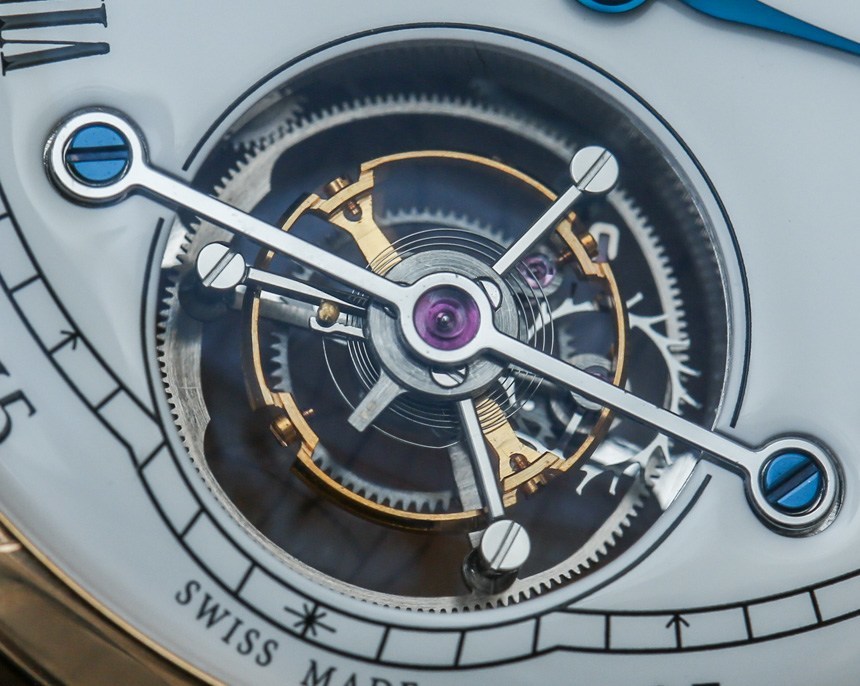 These are really high-end watches in the context of Graham’s existing range. I guess this was their game-plan – roll out whatever sells until the brand is big enough to release something genuinely interesting that they can charge a lot more for. The Geo.Graham Moon watch and the Geo.Graham Tourbillon Orrery are both very busy, rather impressive-looking contraptions. The Geo.Graham Tourbillon, however, is incredibly restrained, civilised, and mature. It is, in actual fact, a very nice watch. If this was coming from another brand, say Piaget for example, I would be quite impressed. So from an aesthetic standpoint, I must admit, I do like it. I do not like the indecisive usage of the Graham name, or the total incongruity of the brand’s offerings. But the Geo.Graham Tourbillon is, in isolation, a success.

And to truly appreciate the aesthetic success of the Geo.Graham Tourbillon, you need only turn it over and study the truly beautiful movement. The off-center rotor weight, wonderfully engraved with the Geo.Graham name and an awesome patten is a triumph of flare and symmetry. The arrangement of the functional elements, the symmetry of the bridges, and the excellently balanced circular finish that frames the evenly-weighted engraving is a massive departure from the Graham norm, but a welcome one in my opinion. 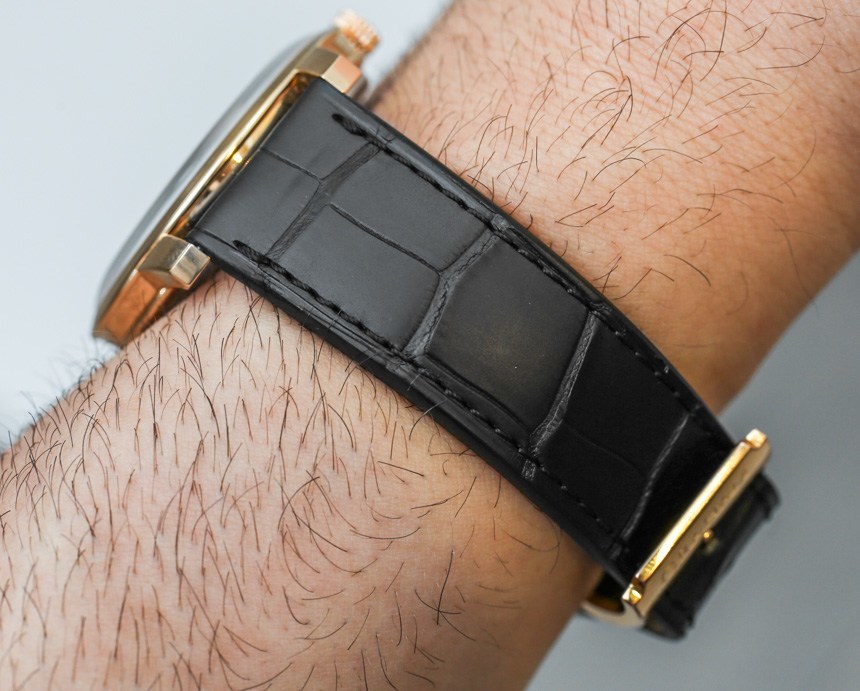 The G1796 movement offers a 72-hour power reserve. This movement is not in-house, but it is proprietary and exclusive to Graham. Impressively, this tourbillon movement is thin – less than a centimetre thin. Given that is also self-winding, that’s quite an achievement. Many of its peers are thicker before you factor in the rotor weight! This surprisingly svelte movement is encased within a 40mm 18ct rose gold housing, which itself is only 9.85mm thick. This all goes together to make an extremely comfortable and wearable timepiece, quite unlike anything one would associate with the modern history of the brand. It’s also water resistant to 50 meters, which I find quite impressive given its materials and thinness. 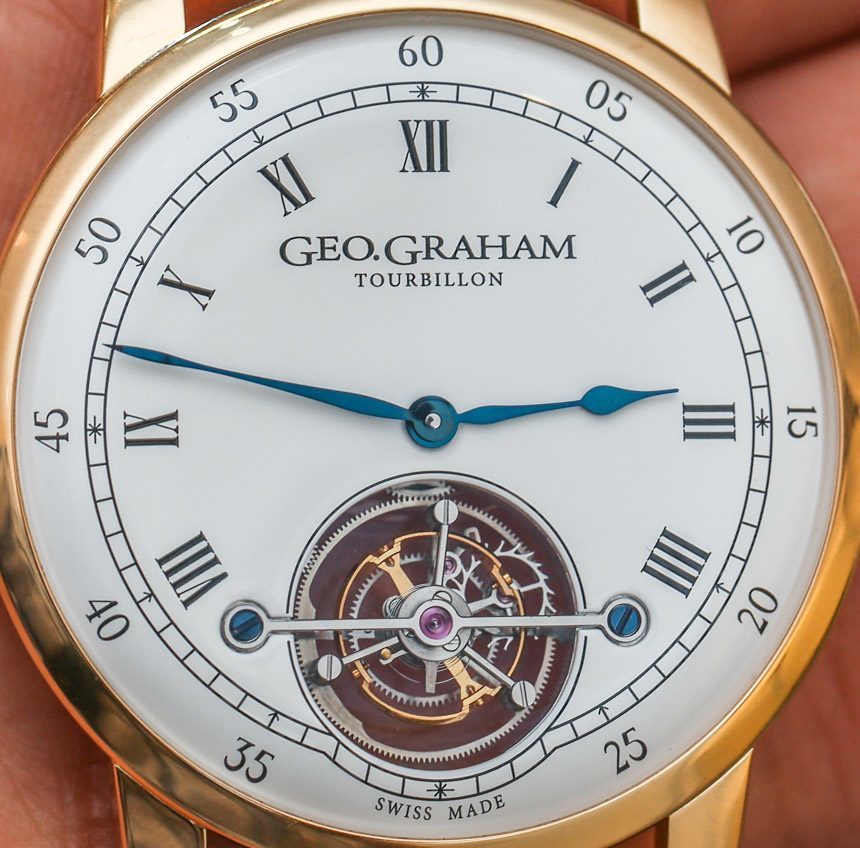 Stylistically, the Geo.Graham Tourbillon looks to the past for inspiration. Blued hands and tourbillon cage attachment screws enliven a domed, white, enamel lacquered dial that is decorated with Roman numeral hour markers and Arabic minute markers, separated by a railway track minute scale. The dial and movement are viewable through what Graham describe as a “sapphire crystal glass box” (whatever the blazes that means). The “sapphire crystal glass box” is basically a thick crystal designed to enhance depth and clarity of the movement. All the sapphire is treated with anti-reflective coating. The case back crystal, which is a huge 3.35mm thick, has special cut-out for the rotor weight. There will only be 100 of the Geo.Graham Tourbillon watches produced, and they will be priced at $80,420. graham1695.com